Summary: This classic Yorkshire Dales walk is one I remember well as it was the route taken of my first Pen-y-ghent climb way back in 1990. Here I am again thirty years later. That first time was in the company of my good pal Steve and I particularly remember all the squelching on the way back from Foxup Moor to Swarth Gill Sike and from following the watercourse to Hull Pot. The gruelling effort still dominates my thoughts of that day and thus overshadows the climb and crossing of Plover Hill. So let me remedy that. Here we go again. 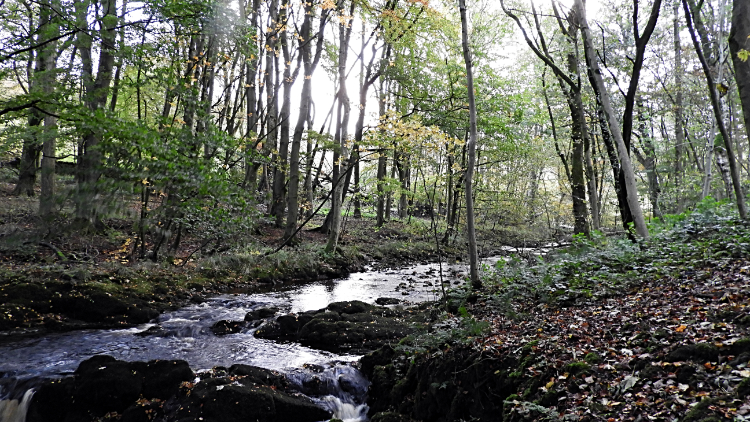 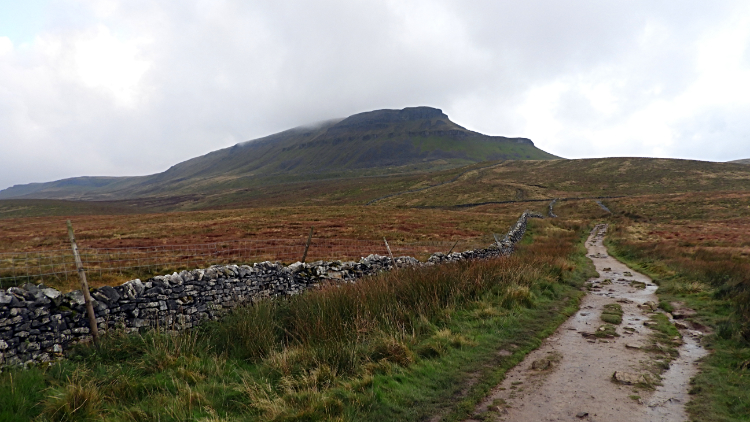 View to Pen-y-ghent from Brackenbottom Scar

I arrived in Horton in Ribblesdale in the early morning of a mid October day. It was just my luck the early morning sunshine was disappearing behind thickening cloud as I set off walking down the side road leading from Horton Bridge to Brackenbottom but I knew the weather forecast promised it would stay dry and maybe brighten up again later. The walk on the access road to Brackenbottom, past Horton primary school which often faces closure yet still clings on in 2020, and alongside Horton in Ribblesdale Beck, a pretty tributary of the River Ribble. I always drop down off the roadside to beckside and stand for a minute or two watching the water flow. It is a pleasant scene. Then it is work all the way, first on the tarmac to Brackenbottom Farm and then along the drystone wall side all the way to Pen-y-ghent, a relentless 450 metres climb over three kilometres distance. Brackenbottom Scar, a series of stepped limestone outcrops, marks the halfway point. 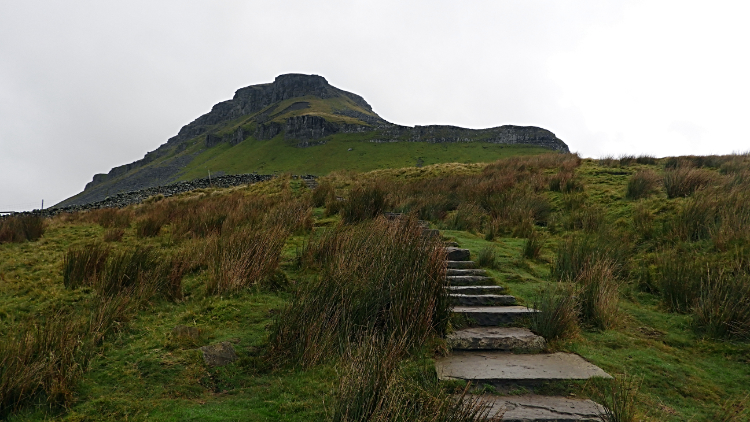 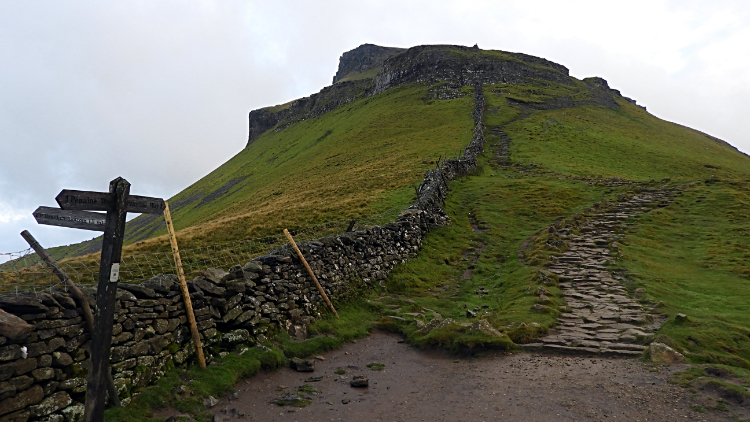 The steep climb from Gavel Rigg to Pen-y-ghent

While following the path ever upwards to Gavel Rigg where the Pennine Way path is met, and while watching the crocodilian south face of Pen-y-ghent grow menacingly near, I thought about that first walk here all of thirty years ago now with Steve. In those days Steve made the plans and carried the map. I was a willing companion but as to where we were going I had no idea. I was no entirely about the bit after Foxup Moor this time either, only recalling the last time was very boggy when we stretched and jumped from plank to plank to avoid sinking into mire. Having said that, I do recall it was walked in deep midwinter so I hoped and expected it to be better this time around. Back to the matter in hand I reached the stone flagged section leading to the junction at Gavel Rigg. Stopping briefly I rested, took a deep breath and climbed the long flight of stairs. Then after passing through the gate to meet the Pennine Way I looked directly up the steep south face. Again I rested, took a deep breath and this time climbed the long cobbled and stepped path leading straight up the mountain. 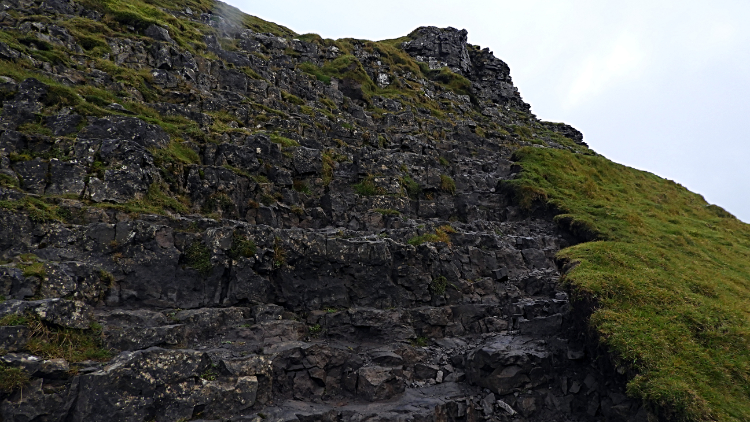 The scramble section of Pen-y-ghent 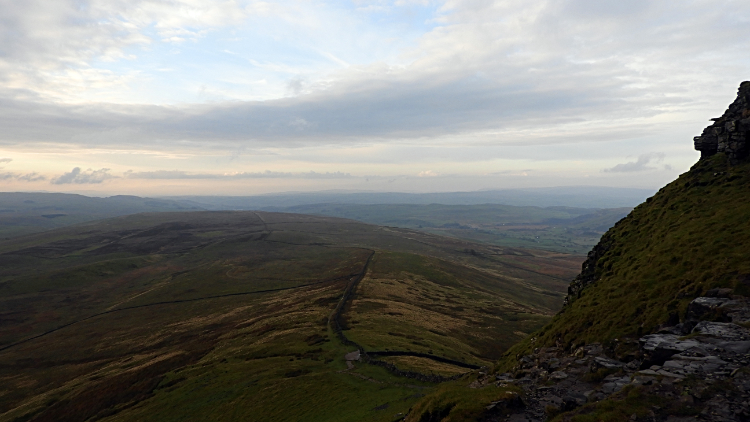 Half way up the south face of Pen-y-ghent, at around the 600 meter mark the path where feet only tread becomes a steep rock step where hands are needed as well as feet. Take a breather here if you like and look around to the view south and south-east where the bulk of Fountains Fell presents an impressive view. After the viewing of glorious Yorkshire uplands turn back to the task of using hands and feet to climb this short section of the mountain. It is not difficult to climb, the easiest of scrambles, and choices of route are numerous. I often wonder if I have ever taken the same route up the short climb twice. I do recall once getting blown off in very high winds which were whistling around the south edge, blowing from east to west, on a raw winters day. This time the climb was straightforward and I was soon back on two feet, biped walking to the top along a well constructed flagged path leading directly to the summit of Pen-y-ghent. 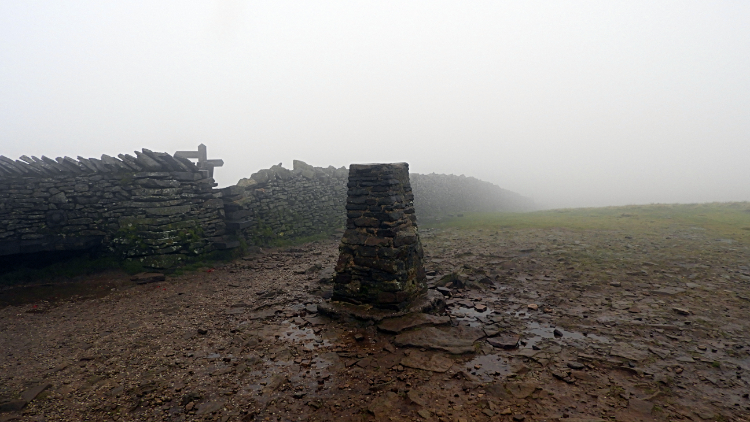 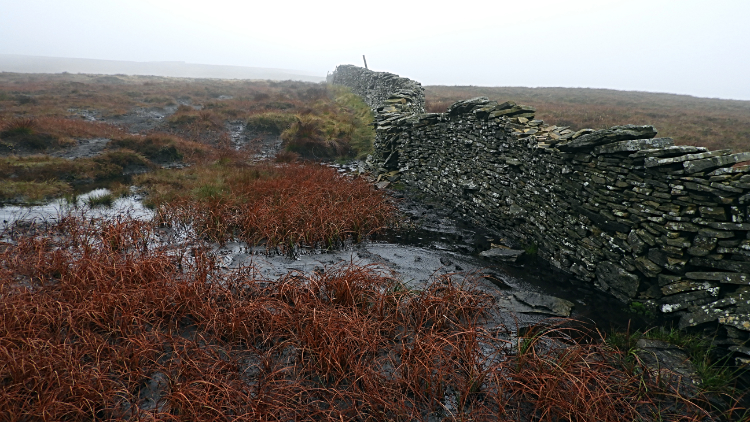 The cloud which had been building as I left Horton in Ribblesdale to start the walk had continued to fill the sky as I had made the ascent to Pen-y-ghent and by the time I reached the height of 650 metres I was within it. Thus the top of Pen-y-ghent was not a place for lingering. Being in cloud sunk the temperature and I was soon feeling the cold. I had a job to do before I could head off the top though. I had promised Rob Potterton, a friend of mine, to leave a present for him near the top of the mountain. He was walking the Pennine Way and would cross Pen-y-ghent this very evening. So with trowel in hand I found a spot and buried a pint of beer for him to enjoy in the evening. He did message me to tell me he had found it. With my digging job done, I swiftly made my way walking due north to Plover Hill. When I say walking, I actually mean meandering, hopping, jumping, edging along the wall edge and all manner of means to make progress without going knee deep in the squelch. Plover Hill is a wet walk in summer, a quagmire any other time. I was glad I had put my gaitors on. The travails of Plover Hill and conditions underfoot did not disappoint me. I actually enjoy such challenges in getting across difficult ground; though a sink to knee deep would have resulted in a few expletives. And though I could see little into the distance because of the hanging cloud that did not matter much. My attention was fixed on the ground. Fashioning the least boggy way forward. 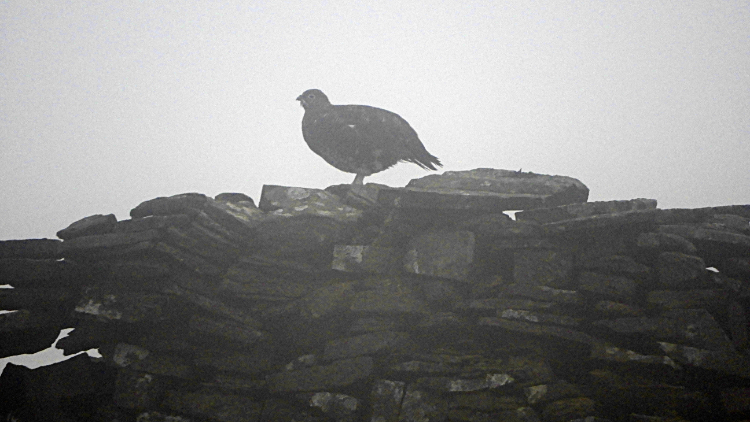 Grouse in the mist on Plover Hill 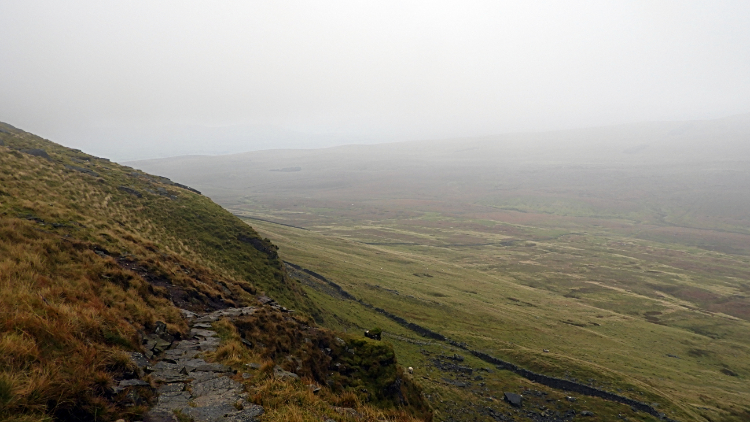 On my way in the shimmer of cloud to Plover Hill I sensed I was being watched. Looking right to the nearby dry stone wall I could see I was. By a Grouse. Looking spectral in the gloaming it turned and watched me all the way until I was beyond it. That was it, I never saw anything else up here. People could have been walking just 100 metres ahead of me or behind me. I would not have seen them. Eventually though, after about a mile and a half of walking from the summit of Pen-y-ghent I crested on the indistinct top of Plover Hill and soon after I steadily descended, slowly releasing myself from the cloud. Still it was murky but at least I could see a little further than just a few metres by the time I arrived at the steep descent from the massive to Foxup Moor. A stone path, which takes effort and plenty of care to get down without slipping, led me into the clear. 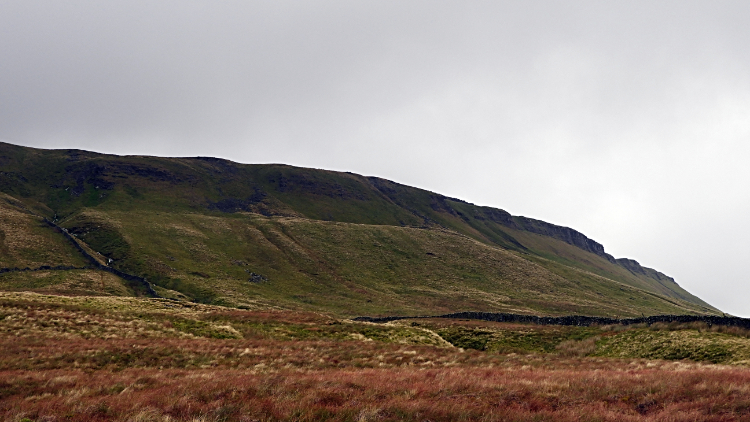 North side of Plover Hill 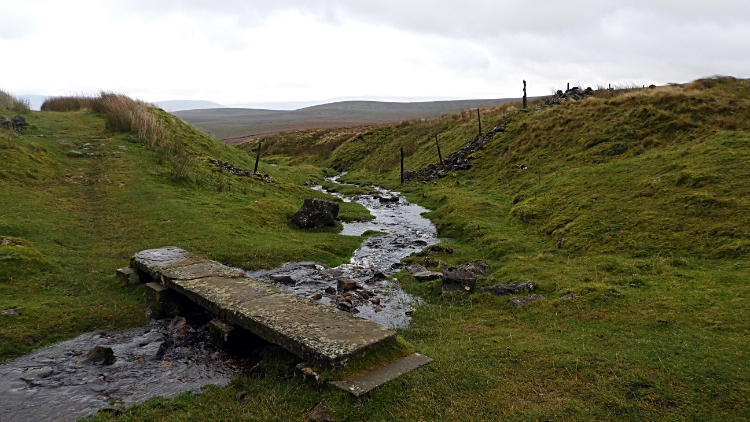 Now here is where the memory blurs. I could not remember being here at all. It was thirty years ago I after all; but where did we go from here? I had the map in hand and I had the route on GPS but something did not look right. The path looked too easy. Too dry. Too good. Anyway, there was no other path around so it must be here. Relieved at the ease of the walk and happy I could now see into the distance, I bounded along the path heading west to Swarth Gill Gate and running parallel to the north side of Plover Hill. "This is a delightful result" I said to myself. Soon enough I reached Swarth Gill Gate were a small single stone clapper bridge crosses Swarth Gill Sike and here a thought sparked a latent memory. "Now, this is familiar. That's it. Steve and I left the path here in favour of following the water". Steve had known it soon merged with another small watercourse and led directly to Hull Pot. That is what we did. Mystery solved. 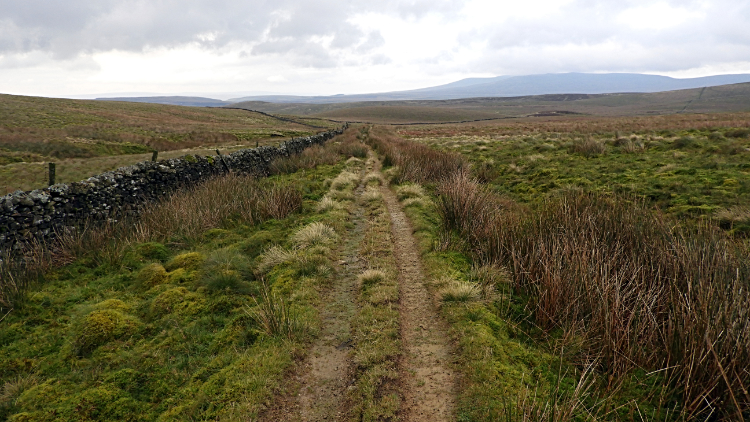 The path across Horton Moor 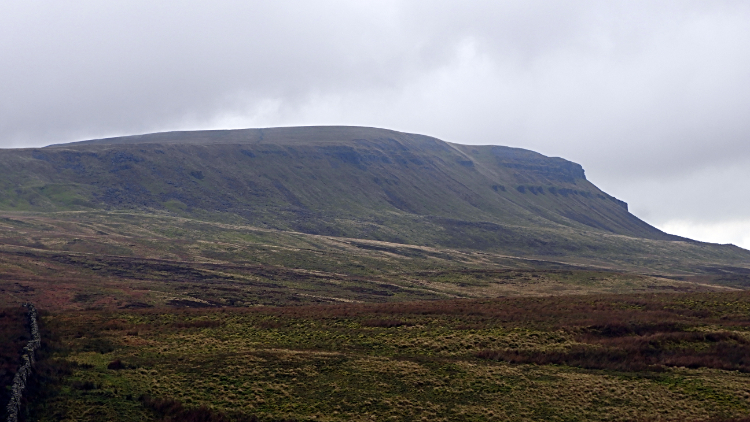 Rather than follow the same route of thirty years ago exactly I decided to stick with the good hard and map marked path. After all I had enjoyed my bog trot already today. No need for another. Sticking with the path marked green on the map I was walking parallel to the old route and at thirty metres higher I was afforded a brilliant view of Pen-y-ghent side by looking to my left. Up and down I went on the good path of firm ground, just one more stream crossing by clapper stone and across one mossy damp patch of ground took me to the point on the path where I could go no more. Not if I wanted to revisit Hull Pot and that was not an option. So I turned right from the path and followed a minor way directly towards the very big hole in the ground. 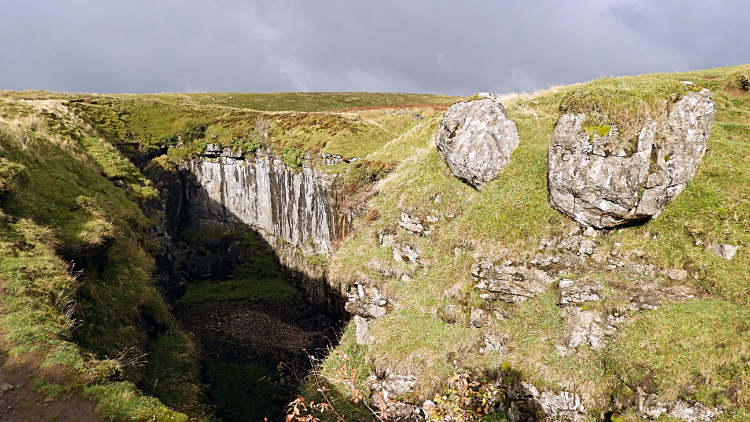 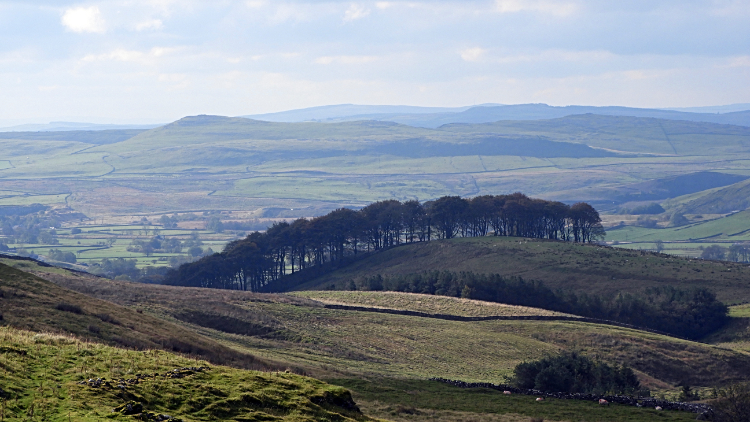 Hull Pot is a marvellous place. It was an awesome moment for me the first time I saw it thirty years ago and it remains a burst of excitement for me every time I fix my eyes on it. A huge hole, the largest natural hole in England, Hull Pot is around 90 metres across and 20 metres wide. The chasm drops 18 metres Formed from collapsed limestone caverns Hull Pot is possibly my favourite of all places in the Yorkshire Dales. I love all of the Dales, so many top spots to choose from like the three mountains of the Three Peaks and scars like Attermire are all draws to me. Which dale would I choose? I don't know. But Hull Pot is the one place I always think of first. When the sun shines brightly into the pot it thrills me. When the waterfall rushes from an overflowing Hull Pot Beck it gets me in the gut. This time though the waterfall was appearing half way down. Has the water burst another way through the limestone and lessened the drop. Is this permanent or not? I hope not. I was at Hull Pot for half an hour. I enjoyed my lunch here. I always do when it features on the walk. 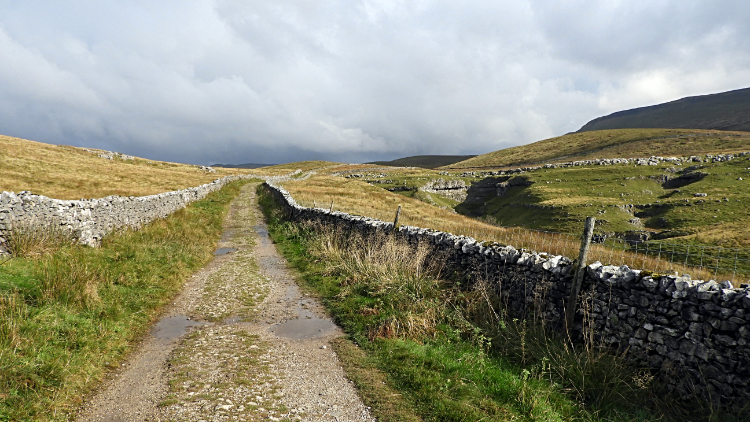 Lane leading back to Horton in Ribblesdale 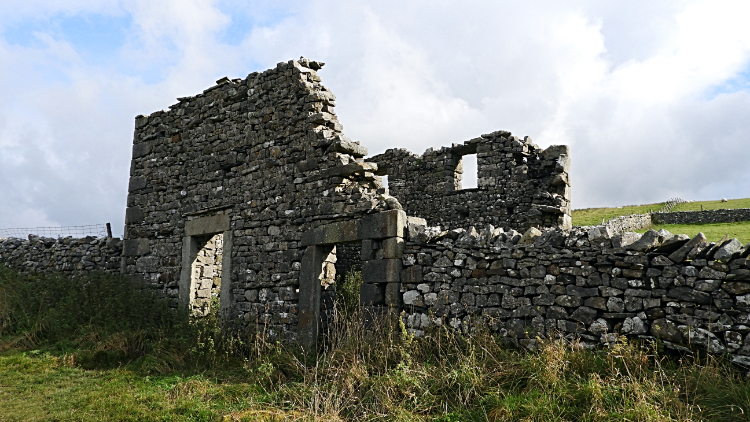 After dragging myself away from one of my favourite places, soon after I strode down the dry stone wall lined lane back to Horton in Ribblesdale. The walk of such special memories was almost completed. And to greet me on the finale out came the sunshine. It had actually popped out for the first time since morning while I lunched at Hull Pot. I felt privileged by that. Now it was in full unabated shining mode. Clouds were still crossing Pen-y-ghent but down in the Ribble Valley the sun was winning the game. Thus the views in my eye line were wonderfully warm. It was a delightful end to a delightful walk. And I had finally solved the riddle of where Steve and I went from Foxup Moor to Hull Pot that last time. That was most pleasing.