Summary: This walk begins in the popular village of Kettlewell in Upper Wharfedale and from the village it immediately heads up from the valley, gaining over 250 metres of height on the climb of Top Mere Road to reach the vast uplands of Starbotton Fell which are crossed to reach Buckden Pike, 702 metres high. After visiting the memorial cross, dedicated to a lost World War Two aircrew and the trig point on top of the mountain the walk descends on a west and south course to the small village of Starbotton in Upper Wharfedale before a two mile long finale following the River Wharfe back to Kettlewell. 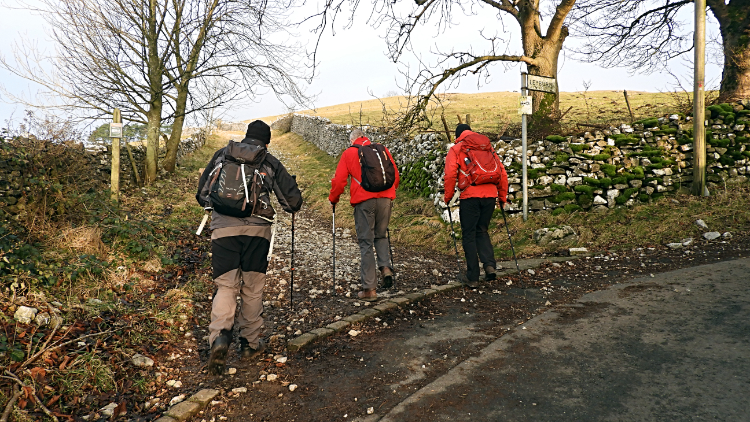 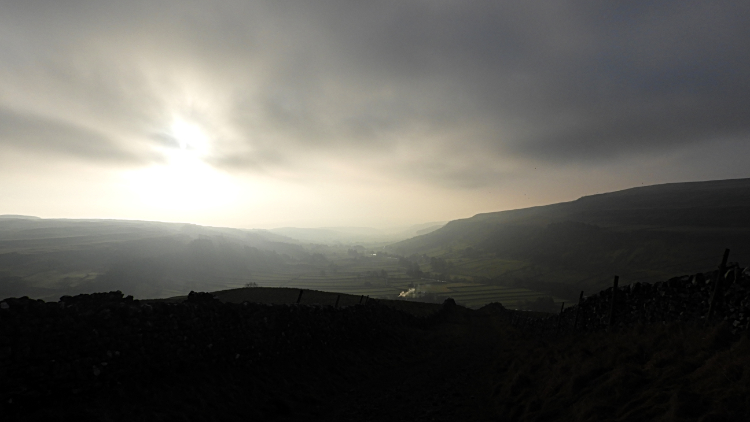 First brief spell of sunshine in 2020

For this first walk of 2020 I was joined by Mark, Paul and Tim. Four lads preferring a good walk rather than an after News Year's Eve party lie in to start the year. In doing so we had the countryside to ourselves; or so it seemed at nine fourty-five in the morning as we traipsed through sleepy Kettlewell to start our ascent of 300 relentless metres up the length of Top Mere Road. As we began the climb the first sunshine of 2020 broke through to bathe Upper Wharfedale. It was not relentless, coming and going from cloud crossing the valley from the west. But at least it was trying to brighten up the scene. 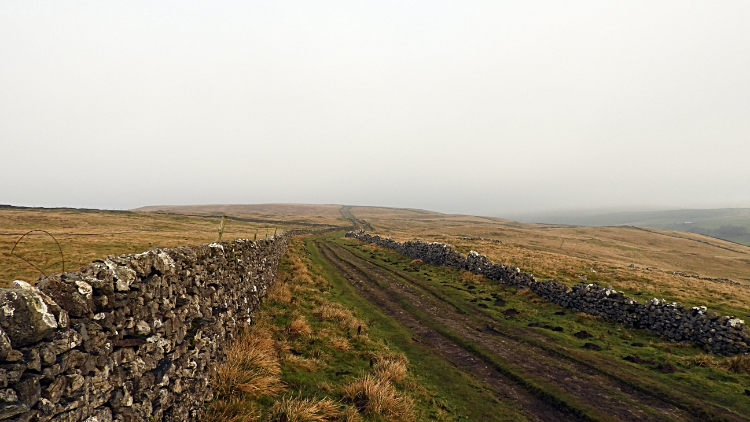 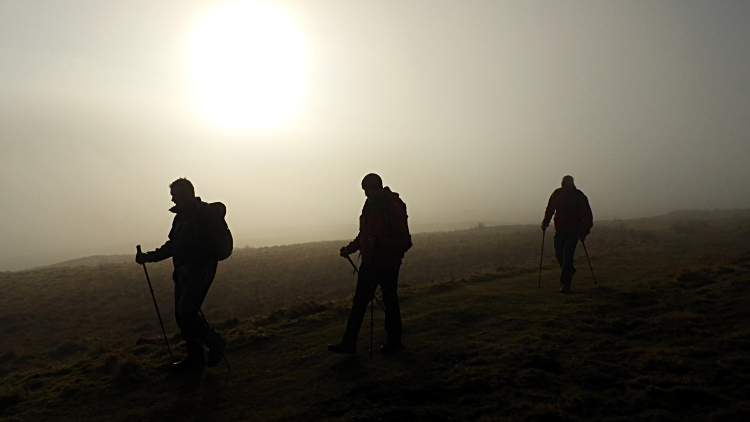 Top Mere Road is an ancient green lane which gave early settlers access to the high fells where they would pasture their stock in the short warm summers of the past. It is still used by farmers from the valley to take hill sheep up and down as required. I have stopped and waited a few times as large herds have been driven on the lane, herded by an associated team of sheepdogs and Shepherds on Quad bikes. Such is the way now. Today though it was just Mark, Paul, Tim and me. Slowly climbing into the loft of Wharfedale. Regular stops on the way up gave us the opportunity to look back into the gorgeous valley which stretches in this part in a near straight line from between Hubberholme and Buckden in the north-west to Grassington in the south-east. A distance of around ten miles before the Wharfe meanders to Ilkey and then turns on a more easterly course to the Vale and York and its discharge into the River Ouse. Oh, a point of observation before I forget. The sun seemed really big when it came out up here, the size magnified by the measure of cloud no doubt. Sometimes it filled the picture which was quite amazing. 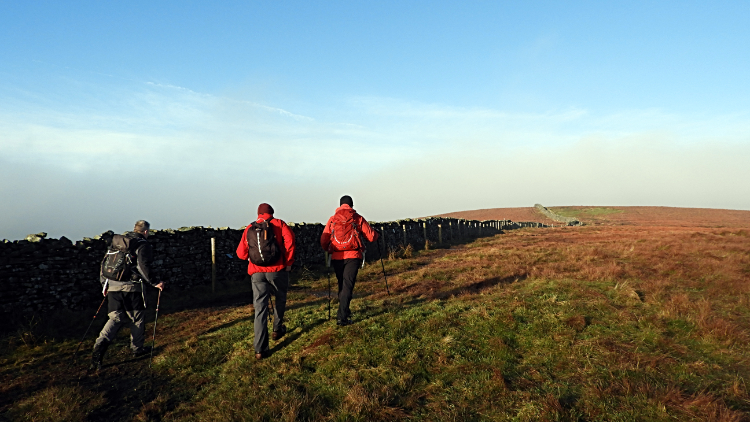 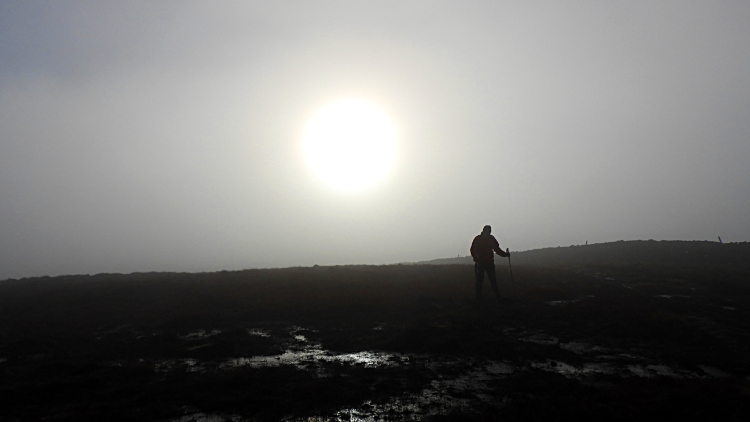 As we climbed further and towards Tor Mere Hole Top which signals the end of the lane we dipped in and out of cloud which constantly shifted over the tops of the fells. Sometimes we were in the thick of it and sometimes we were walking in the gorgeous blue of a clear sky. It was quite a thrill to be personally involved with the changing moods up here. A three way signpost read 'Kettlewell 2ML, Starbotton 1½ML, Hunter Sleets 1½ML'. We ignored all three directions, our way to Buckden Pike not shown. Our way was to continue northwards on a course through the debris of old mine workings. There were small slag heaps all around, so old now they are all covered in new grass, a bit like the little half egg shaped hills of Grimes Grave. Beyond the more recent industrial debris we hit the 600 metre altitude and started to level off. Though not entirely. It was a hard slog over the unpathed tussocks between Tor Mere Hole Top and across Starbotton Out Moor to reach Starbotton Fell. Just about thirty metres of climbing over untrod ground. A tough 30 metres of gain. 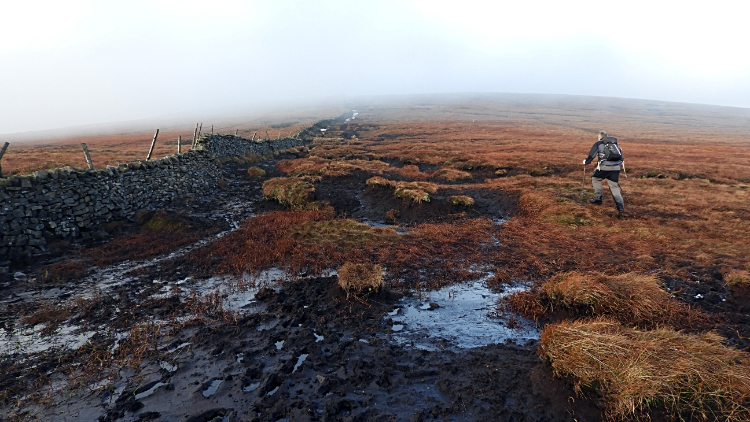 Crossing the bogs of Buckden Pike 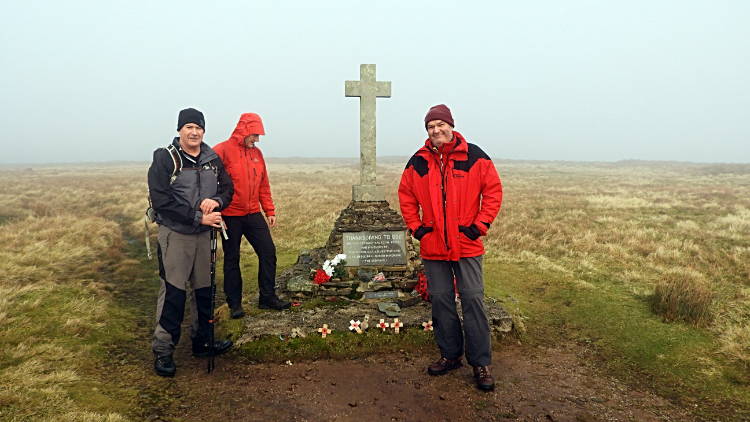 Anyone who knows Buckden Pike will tell you it is a wet fell. Blanket bog covers much of the high ground which soaks up all water discharged from the clouds and which does not like to release it in a hurry. I have crossed from Hunter Sleets to Buckden Pike in summer and got wet. So, on the first day of the 2020's it was inevitable we would be wading through bog and walking in anything but a straight line to make progress across the fell top from Starbotton Fell to the Memorial Cross on Buckden Pike. Splodge, splurge, sink in. We did it all and it was such fun. Truly, I think I would be a little disappointed not to find this part of Buckden Pike the stay dry challenge it has always been since I first visited. I remember once, on a walk with Steve in the mid 1990's, when he went down a sink around here, all the way to his knees which made me laugh. Only for me to do the same about five minutes later which allowed him to get his own chortle back in. Fair enough. A great memory of special camaraderie. Anyway, this time around the four of us made it all the way to the Buckden Pike Memorial Cross without any significant mishap. 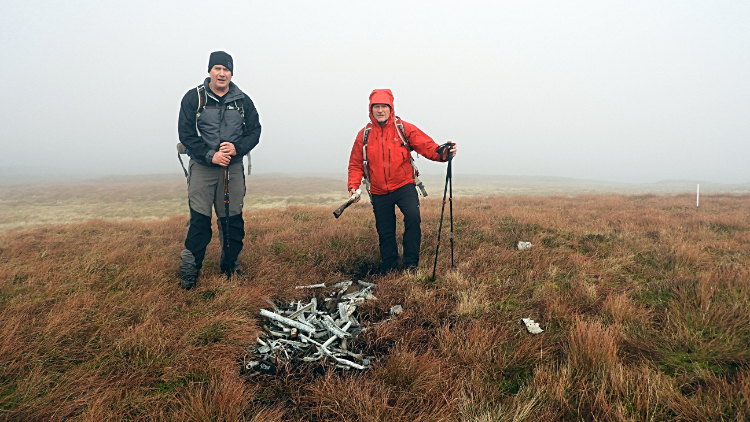 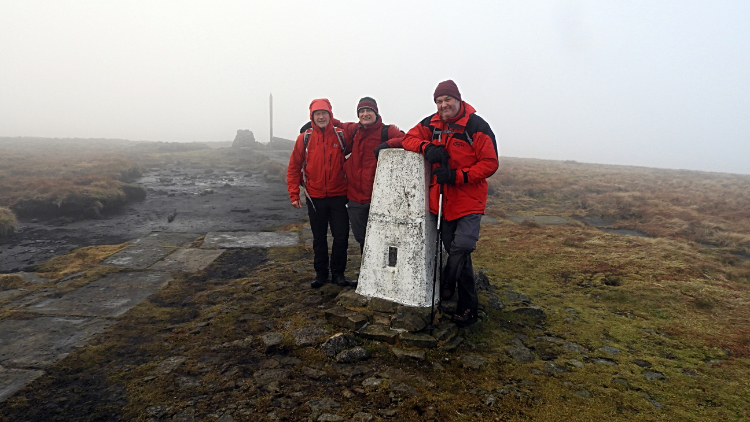 Mark is an aircraft crash site investigator. He takes great interest in finding the sites, understanding the tragic stories and paying his due respects. So here, he wanted to seek out the remains of the Wellington Bomber which came down in a snowstorm during the winter of 1941-42 and killing all but one of the air crew. I was interested to see the remains of the aircraft too, having been to the memorial many times to pay my respects without knowing there was still crash debris up here. It took ten minutes of looking around to find out what little of the wreckage remained but Mark found it. The small assembly of broken metal was a stark reminder of a tragedy. A poignant sight indeed. From the crash site we walked on to the trig point marking the high point of Buckden Pike at 702 metres elevation. Having made our highest ground we all huddled down by the drystone wall near to the trig pillar and enjoyed our New Year's Day lunch. 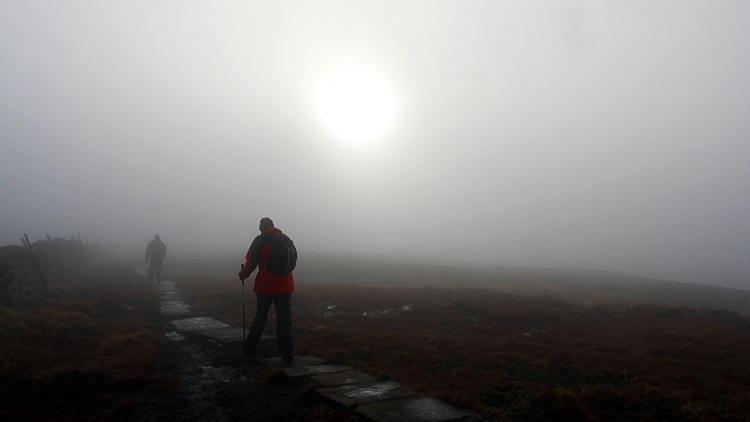 Heading off through the cloud 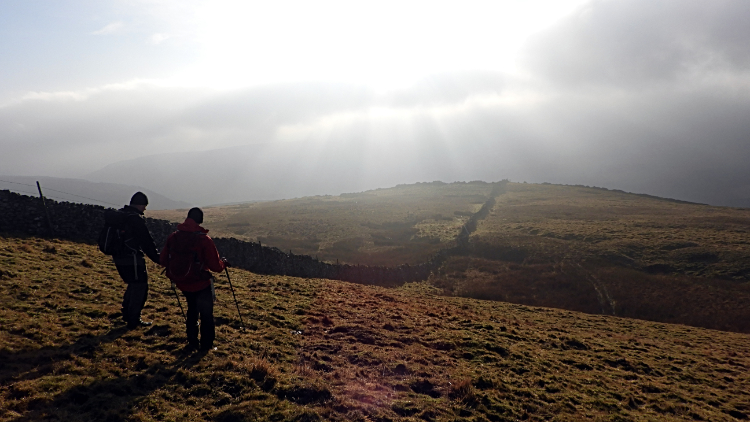 Light over the valley

After our fifteen minute lunch we resumed the walk, first by heading straight back along a path which was partly paved with flags to Memorial Cross. Then we headed on a good unmade path following a south-west line across Starbotton Fell and closely following a fell boundary wall. This course led to the beginning of our descent from the high fells to the valley below which beckoned us with enticing shafts of sunlight breaking through the clouds. It was very alluring, almost fairytale if you believe in that kind of thing. 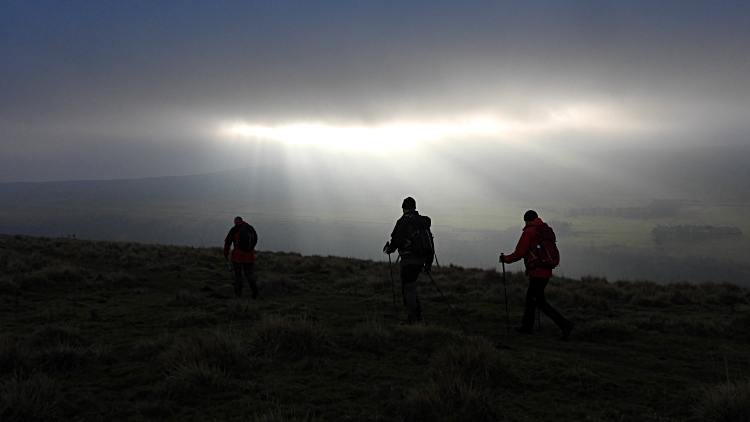 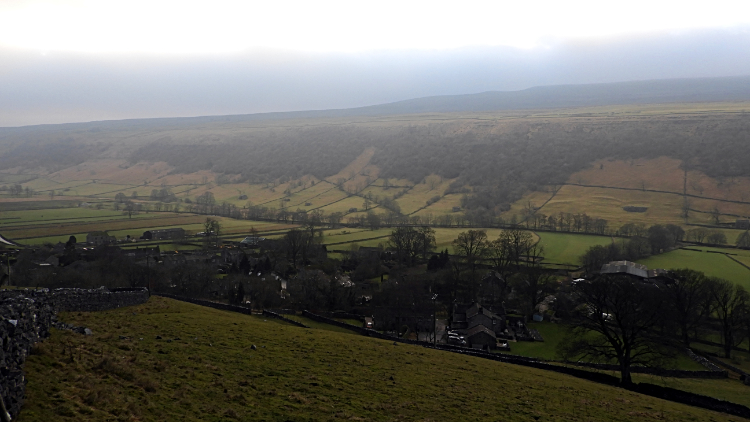 Steadily downhill we went, the natural spotlight of sunlight drawing us toward it. The glint was spectral and beguiling. On the ground, while heading down, we passed a couple of lime kilns set into the hillside. At the 400 metre line we came to the sheep, all looking curiously at us as we marched past in a line of four. Then we came to another three direction signpost. This one read 'Buckden Lead Mine 1⅞ML, Walden Head 4⅛ML, Starbotton ⅜ML'. All very precise. So, we had three eighths of a mile to our next destination and true enough we could see it directly below us, the small village of Starbotton. Reaching the village would see the end of our first fell walk of the new year with just a valley meander to follow as a finale. Before the village though we had a small break beside Cam Gill Beck where Tim found a convenient bench to make a few running repairs to a tender foot. No alarms, just good husbandry. 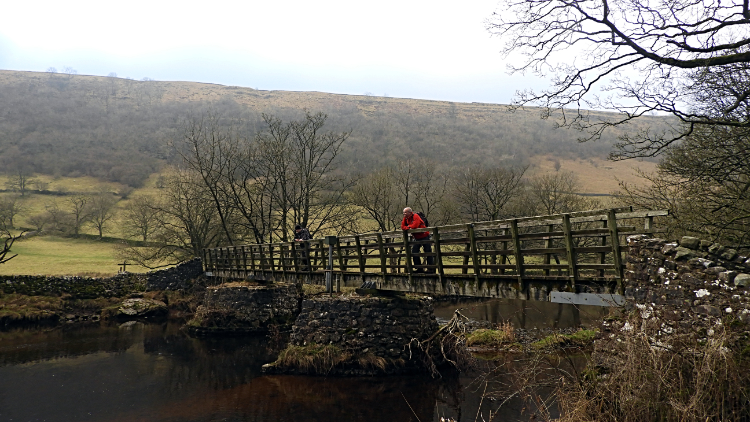 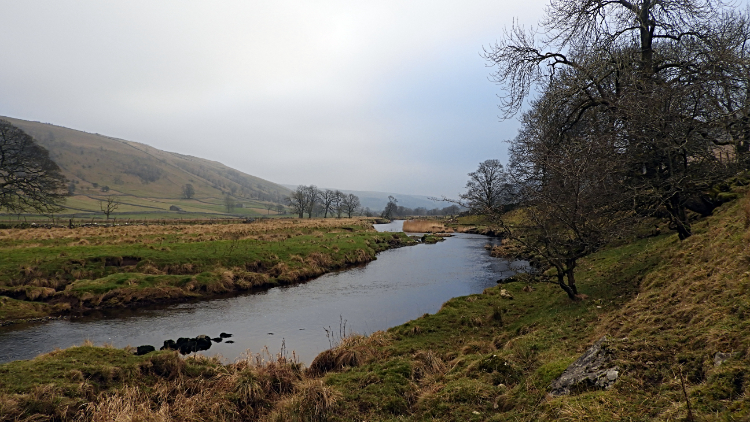 I have done the walk along the river from Starbotton to Kettlewell, in either direction, plenty of times. Being part of the popular Dales Way long distance footpath many good folk have. Despite my familiarity with it, the walk is always enjoyable in the midst of a lovely stretch of the young River Wharfe. And so it was this time around with the hard miles of today done already. It was time to chat and share the good old end of walk banter as we strolled back to the start. We talked about all sorts, families, hopes and aspirations, sport, current affairs, future walks planned and more. We talked of getting together for another walk together in the late spring or early summer. However, something we now all know about, a dastardly pandemic scuppered that. Still, no virus could take away the memories of this great first day of 2020 away. It was some walk in great company.