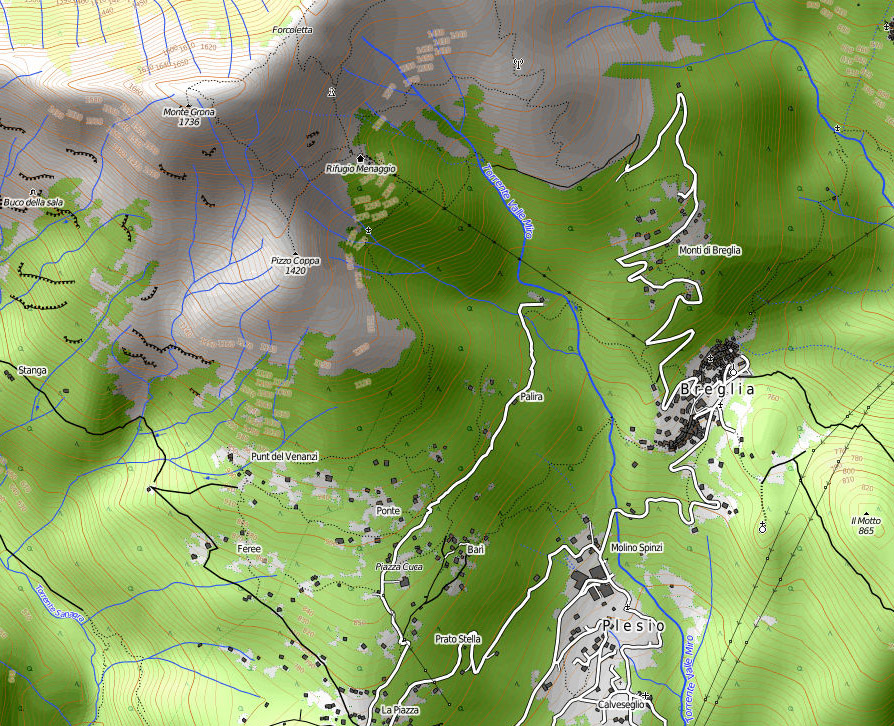 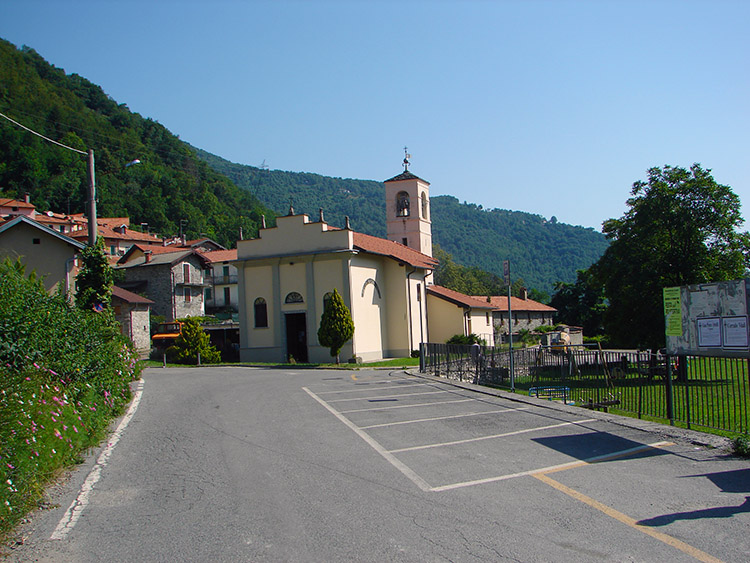 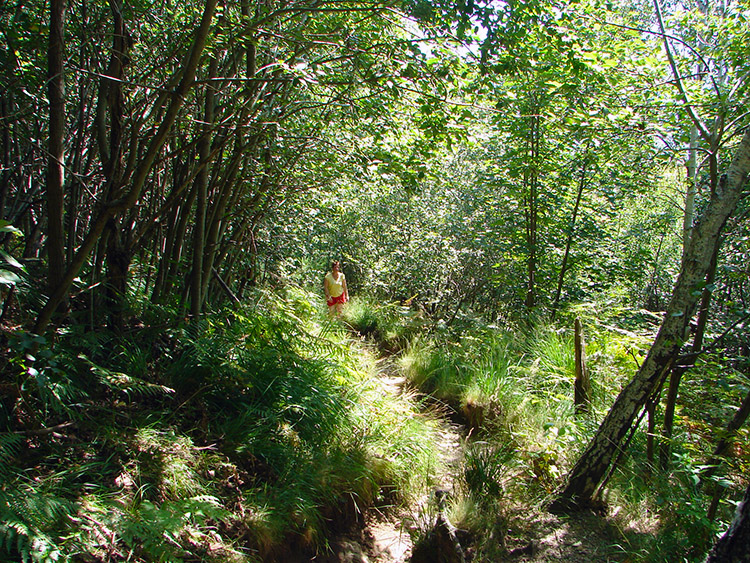 On reading about the superb walking in the countryside near Menaggio on the shoreline of Lake Como Lil and I decided it was here that we wanted to spend the summer holiday of 2007. It took me a little time convincing my wife but as long as I assured her some relaxation between the walking days then the plan was acceptable. And so after due approval and thorough planning we located ourselves in an apartment in Grandola ed Uniti just above Menaggio for 10 days. On arrival I soon found out more detail about the walking in the area and it did not take me long to focus on the Rifugio Menaggio as a suitable walk. The Rifugio is a mountain shelter situated at 1400m altitude on the southern slope of Monte Grona. From the Rifugio it promised brilliant views of Lake Como so it was natural I would want to go. I could also locate Lil there while I tackled the summit of Monte Grona which is saved for another report on these pages. Thus we decided to walk together to the Rifugio from the village of Breglia. It was a hot day. 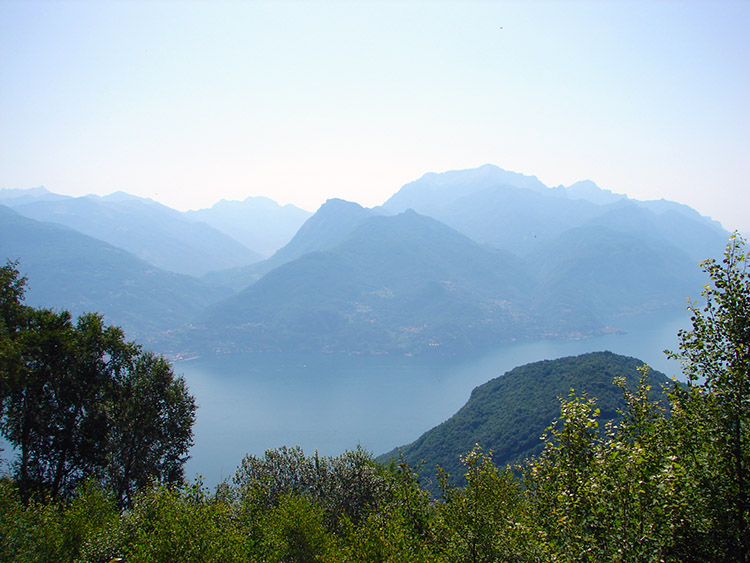 Looking down to Lake Como 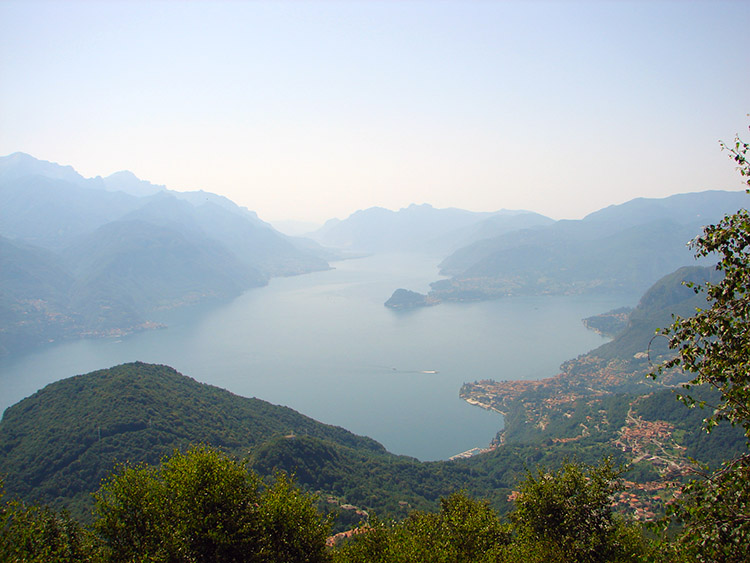 Lake Como as seen from the slopes of Monte Grona

We made our way to the start point in Breglia by taking the C13 bus from Menaggio which was fun in itself taking us up from the Lake Como on a steep hairpin road via the mountain village of Plesio. A note about the buses in this region. Study the timetables well for they are not regular, a few running in the early morning, fewer to lunchtime, even fewer in the early afternoon, and then a few in the late afternoon until the last bus around 6.00pm in the evening. Don't rely on buses for late night journeys, there are none, on any route. Anyway back to the walk and after our little bus deposited Lil and I in Breglia mid morning we set off by crossing the road and following the uphill road signposted to Monte Breglia and Rifugio Menaggio. For the first kilometer it is winds up the metalled road. In some places there are cut through tracks to cut off the hairpins. It's a matter of choice. The road is fringed both sides by dense woodland for the first part but after a while houses are reached and it is here at the habitations that a sign does point right from the track. When the road is met again we crossed over a field with houses close by and then onto the road again near more houses. Here we were joined by a local couple walking up the road to have their elevenses on conveniently located benches affording them fantastic views over the northern end of Lake Como and the surrounding mountains. 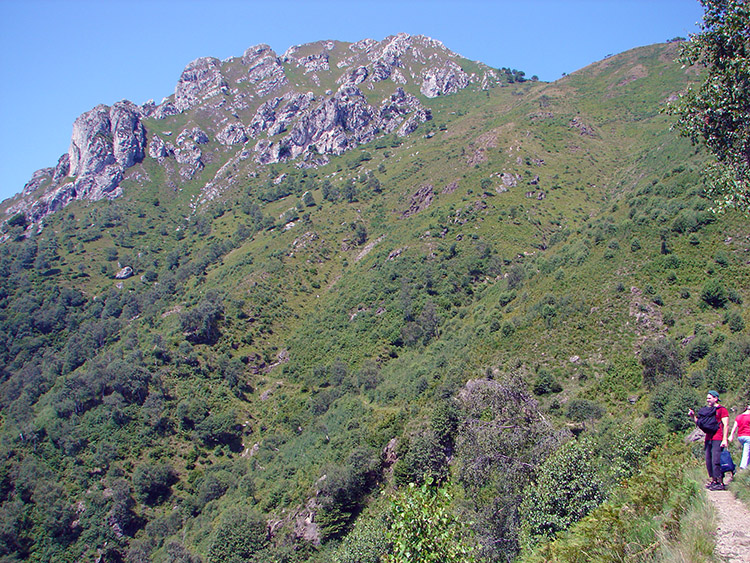 The path up to Rifugio Menaggio 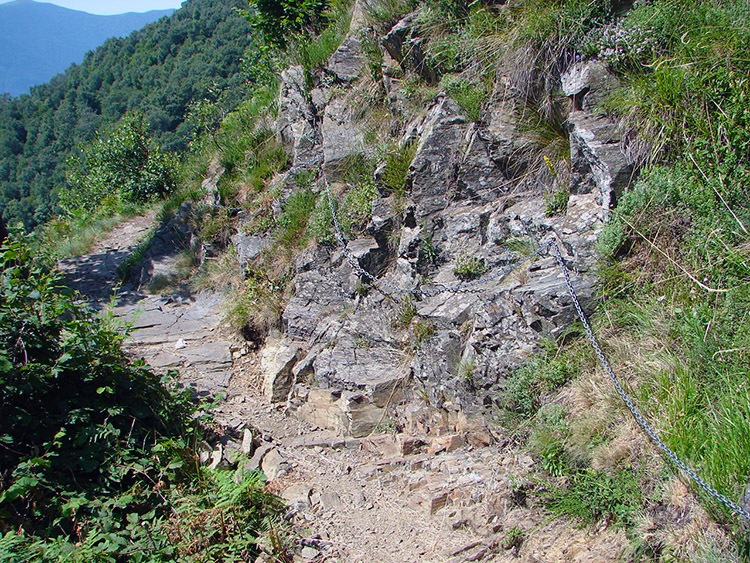 After the picnic area where there is also a fountain for a fresh top up of water (you will need it) the road ends and there now follows a tough hike zig-zagging up the hillside in thick foliage. In July, as we can testify, it gets stifling with crickets incessantly chirping and other insects enjoying snacks on our fresh bodies. Both Lil and I took hits from the wee beasties but we did score a few revenges along the way. During the walk up on this spell the views were mostly blocked by the trees and bushes but their were odd openings which gave tremendous views both up to Monte Grona and down to Lake Como. Breglia was looking a long way down now too. Eventually after a multitude of hairpins the climb eased and as we levelled out we got our first views of Rifugio Menaggio from across the other side of the mountainside cut. On seeing the path to our goal Lil exclaimed "You are joking!" for it did appear exposed compared to what had gone before. Fun was to come on this final stretch to the Rifugio. 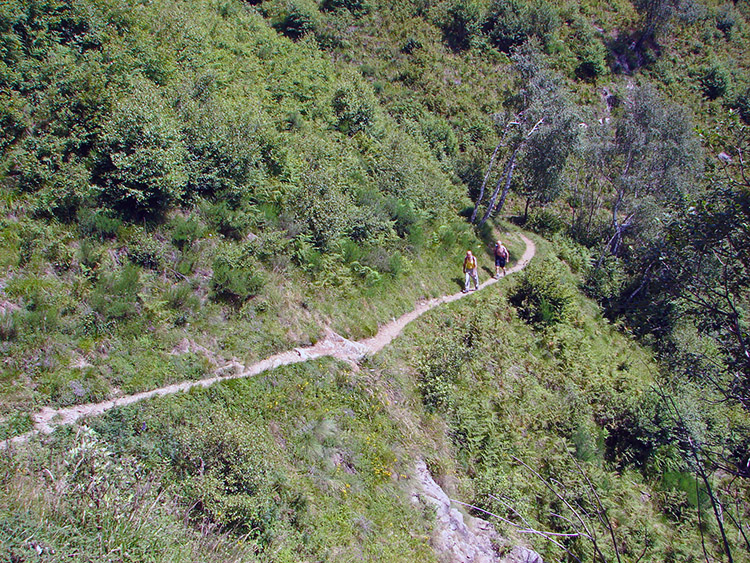 Looking back to the path from Rifugio Menaggio 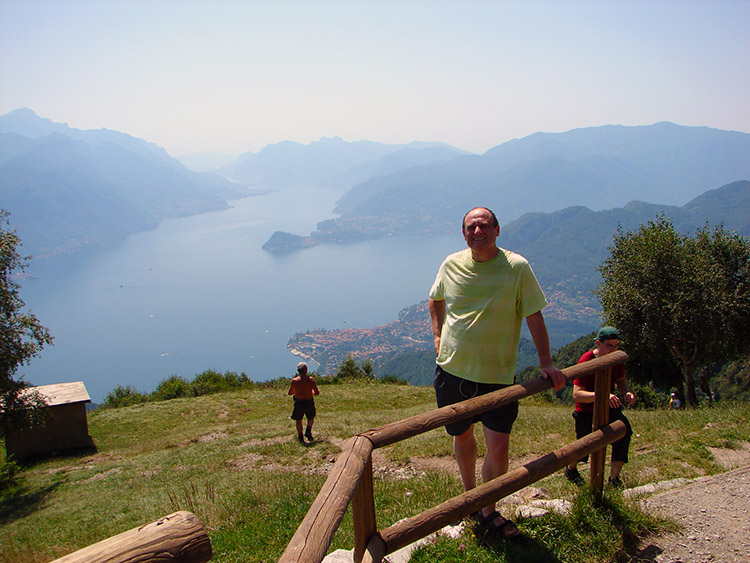 The view from Rifugio Menaggio

On siting the Rifugio the track offers a fork right to S.Amate and Monte Bregano. A case of another time, another place for we kept right. Soon the exposure became more evident and to our left the hill just fell away. Luckily for Lil it was not too precarious and only at one spot were there chains cut into the right hand side rock for support. More fortunately we now ran into other walkers which gave Lil more security and especially when four local chaps walked in line formation singing opera!! A surreal moment, fantastic to experience - thanks gentlemen. After a short while we reached the Rifugio and true enough the views over Como had not been exaggerated. They were sublime and we rested there for some time taking in the view. Then after my excursion up Monte Grona (reported on another page) we tracked down by following our route taken earlier. A nice interlude for us both was watching some brown kites hovering above during the descent, a nicer moment for Lil was the return to Breglia. She had done really well and I was proud of her.