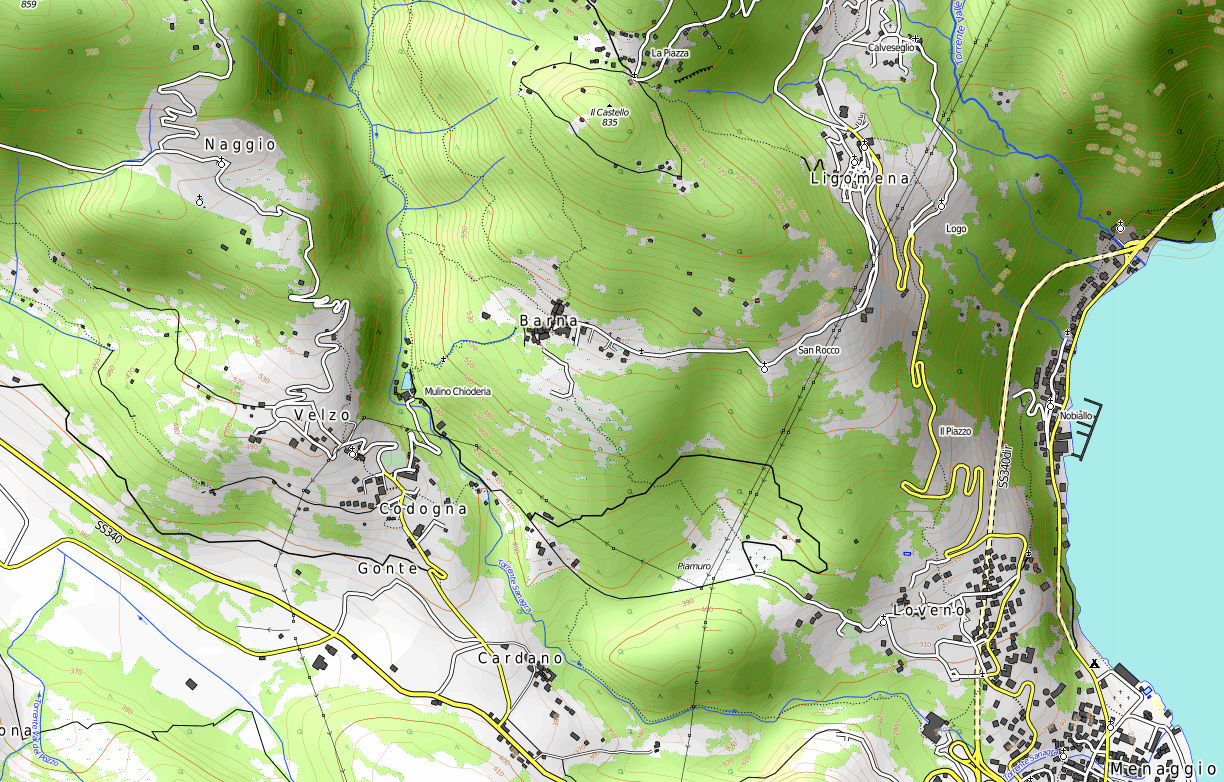 The Walk: This walk had the unique distinction at the time, as being rated as my wifes 'Best Ever Walk', an accolade she has given it since completing it during our Italian holiday in the summer of 2007. Just three day's previously she had walked from Breglia to Rifugio Menaggio and despite the excellent views had not enjoyed it because it was too tough for her. Not this one and that is surprising for it is not a walk without it's own difficulties. The reason for her plaudits were that the difficulties were easily out-measured by the fantastic moments of the walk. 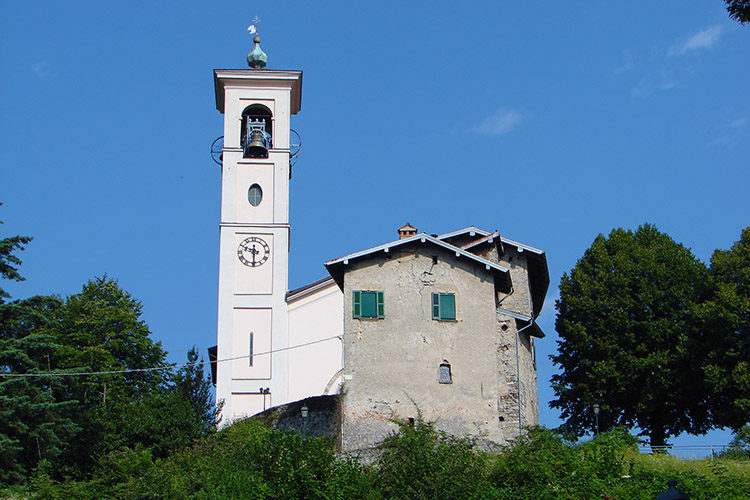 We passed Codogna Church on our prelude walk up to Naggio 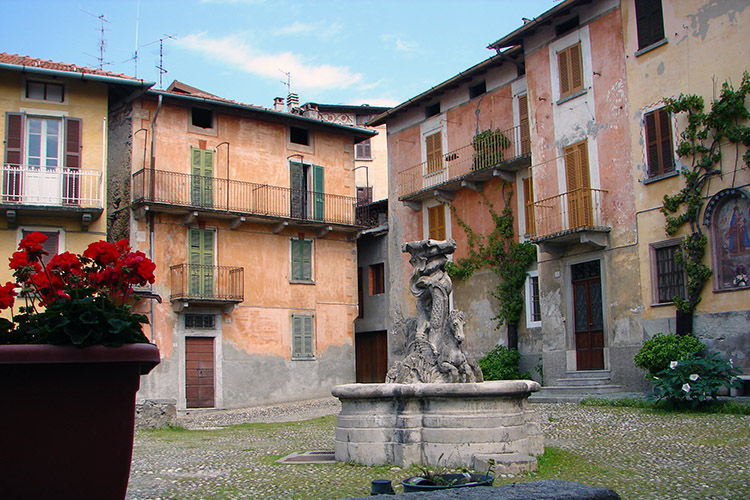 The central piazza in Naggio, a most charming village

The official walk begins in the fantastic hill village of Naggio but ours began with a walk up from our apartment in Cardano. It was a fairly tough hike up road and paths but at least it got us into the frame for what was to come. And on the walk up we did pass the beautiful church at Codogna and some picturesque villas. It was in Naggio though that we got really excited for the streets were enchanting to walk though with a number of hidden piazzas to dwell in. There were dead ends too and once we hit one where a wonderful old lady tried to put us on the right track. We all laughed at the language barrier which avoided us making sense of each other. Gestures and hand signals proved enough to send us on our way. We explored for a while before seeking our way out of the village to continue our walk. 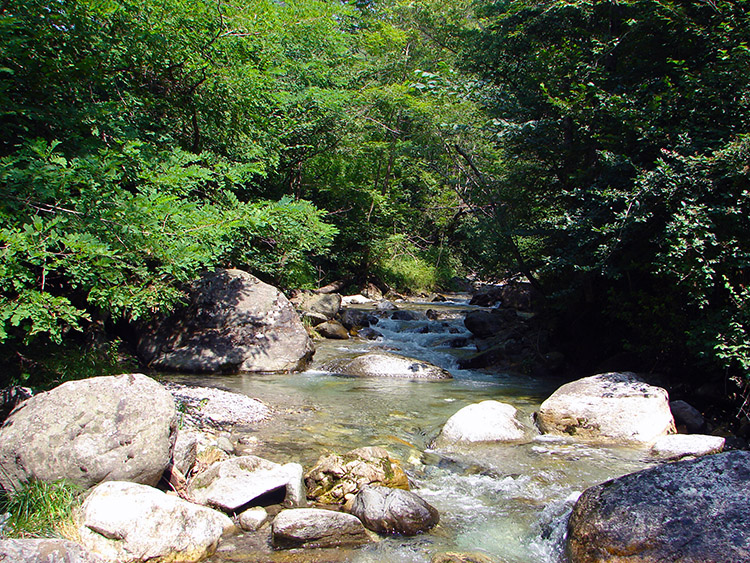 Crossing point of the river in Val Sanagra at Madri 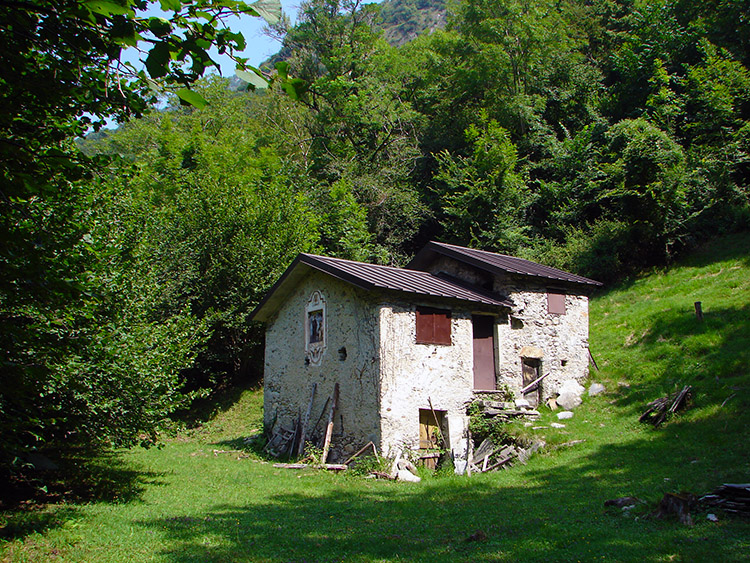 Derelict farmers huts in the pasture at Madri

We left Naggio by following a road up out of the village which leads to Mti Di Grandola. we were not going that far and after following the road for a while we reached the small prayer chapel of Sant Rocco which was our cue to leave the road and head down into the depths of Val Sanagra. Lil was pleased now for the climbing was all over. Except for some undulations it was now downhill all the way to Menaggio. The descent from Sant Rocco was firstly by track and then at some locked iron gates by rough track. The track descended first gently and then steeply into dense woodland. During the descent we could clearly hear the river below but it was hard work getting to it. Lil picked up one stick to help her descend down and soon after another to double pole. And she needed to for the descent down the path was really tough now and cautious walking was the order of the day. Never dangerous because of the dry conditions this path will have to be very carefully negotiated in the wet. Sometimes I waited for Lil to give her a hand down.

Eventually we got down to the river unscathed. In some perverse way I know Lil had enjoyed the challenge and the achievement of getting to the bottom and into the Madri Pasture. Immediately another challenge stood in front of her for in the pasture, a lovely area surrounded by derelict pasture farmers buildings, we had to cross the river. And there was no bridge. There was a tree trunk felled across the river to assist but we declined that point and waded across a few yards further upstream. It was fun and the wade across gave us a lovely refreshing cool down. We both had a giggle at the walk so far. To date we had enjoyed the village of Naggio, the precarious woodland descent and the river crossing. Three special moments so early into the walk and more classic moments were waiting ahead of us. 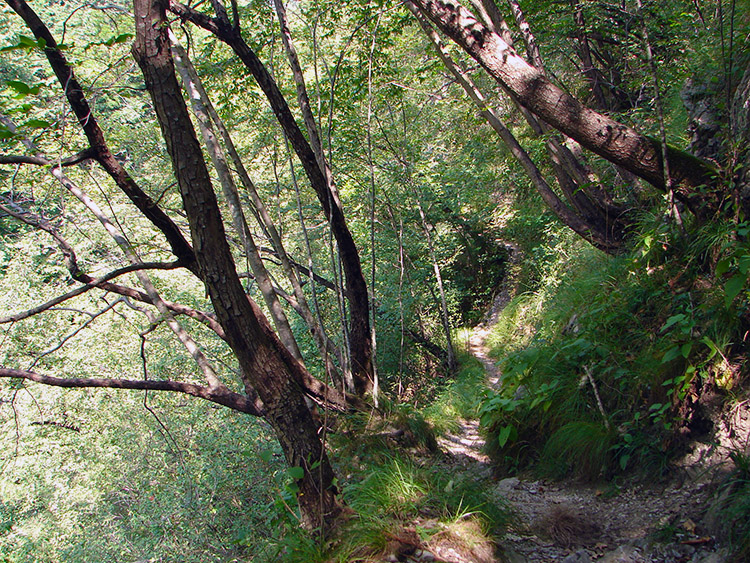 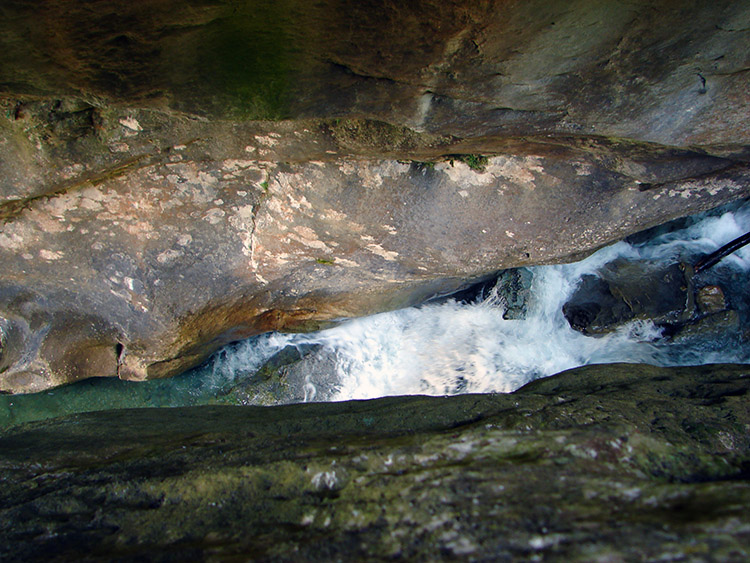 The incredible cut through the gorge at Sas Curbee

The next bit of fun, or terror as Lil would see it, was the track walk from Madri to Sas Curbee. The guides described it as a gentle level woodland walk and in some way that is exactly what it is. But not for anyone who suffers from vertigo. From Madri until a signed junction it is not anything of concern but then after the right hand fork was taken to Sas Curbee it was a different story. The path clings to the left hand side of the valley and to the right there is a steep drop. Sometimes it is decidedly sheer and there were times during my enjoyment of the path that I though 'blooming heck'. Lil walked on leaning heavily to her left and to her extreme credit she never gave up. If she had frozen I would not have known what to do. Step by step she made her way along like a professional hiker. I was truly impressed.

After the hair raising moments of the exposed path we came upon the gorge of Sas Curbee. First impressions on the approach we impressive enough but they were nothing compared to the close up experience in the gorge mouth itself. The area of huge dolomite walls and massive boulders barred the path of the Sanagra and has shaped one of this walkers dream moments. It was fantastic for the river had cut a deep chasm in order to make its way though the gorge and onwards. The chasm was about 20 metres deep at its narrowest point at about half a meter across. 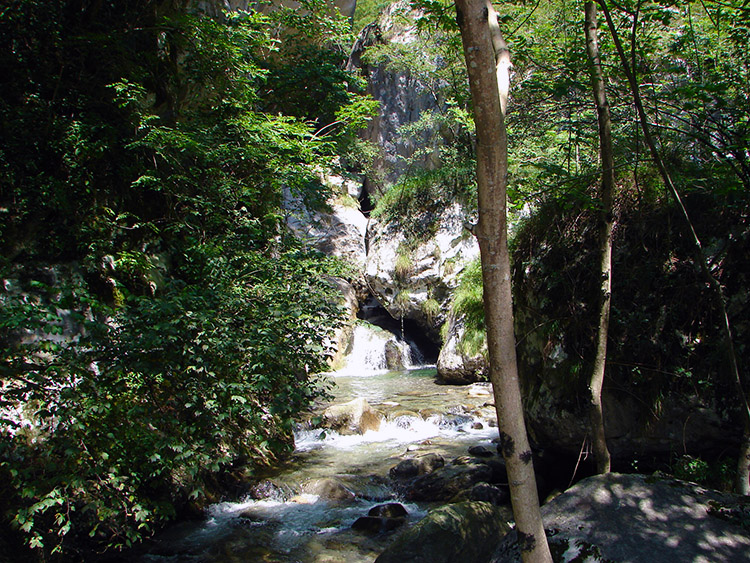 Water cascading through the gorge in Sas Curbee 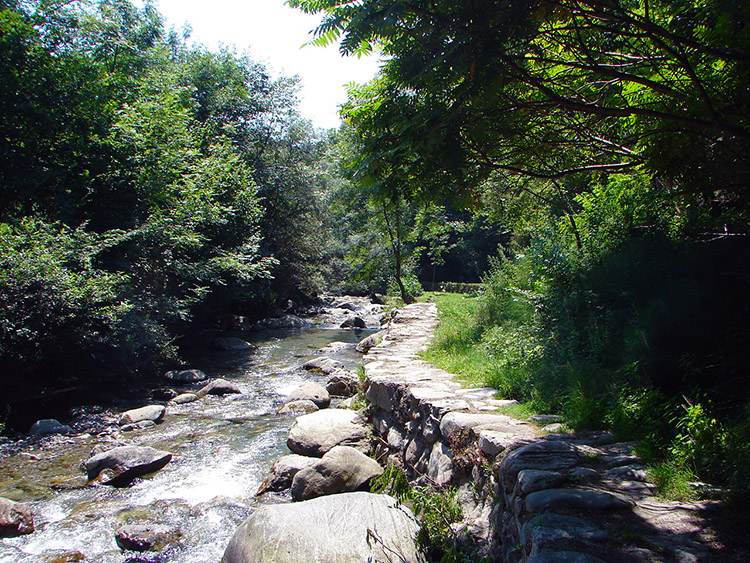 The Sanagra has now calmed down into gentler grace

It was a moment of reluctance leaving Sas Curbee but we had to move on and we did so by walking down a stepped stairway cut into the rock and once at the foot of the stairs we moved on to an old Carliseppi and Spinelli corn mills at Mulini. Here we took a break to paddle in the clear waters of the Sanagra, our second time in the river. It was just as refreshing as the first time. After our paddle we followed the river to the La Chioderia trout farm and its welcoming inn. We stopped for lunch and a beer. For lunch we had local cheese and bread. We could have had trout and chips but Lil did not fancy choosing her own from the live selection pool. The cheese and bread was most welcome for we were hungry. The beer was very refreshing indeed and after our refuelling stop we walked on to Gali. 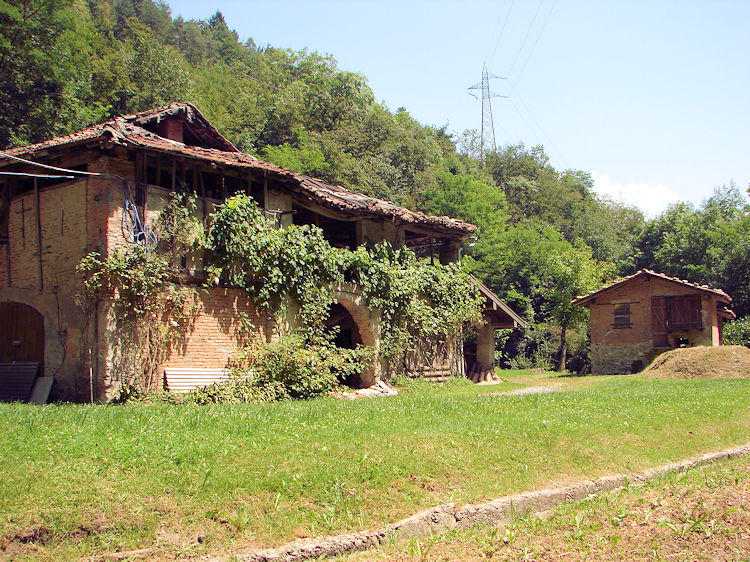 Buildings once part of the functioning brick furnace at Gali 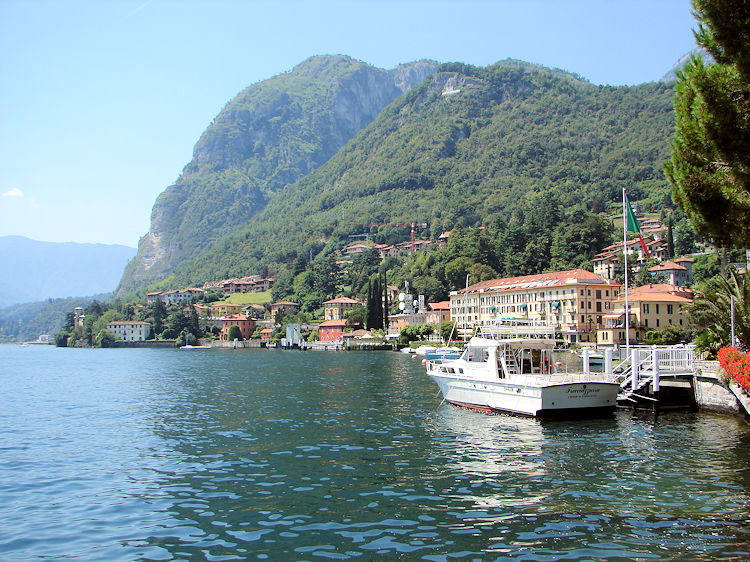 The walk ends at Lake Como in Menaggio

The final stage of the walk was now upon us. We soon reached the old brick furnaces at Gali with beautiful buildings around. Much more scenic than a brick works in England thats for sure. Then we walked to Pianure and down the road into Menaggio. We were jiggered by now and it was getting warmer at around 36 degrees C so we really did welcome our drinks at the bar we chose in Menaggio on the banks of Lake Como. We relaxed and recalled our fantastic walk in Val Sanagra. Lil's 'Best Ever Walk'.