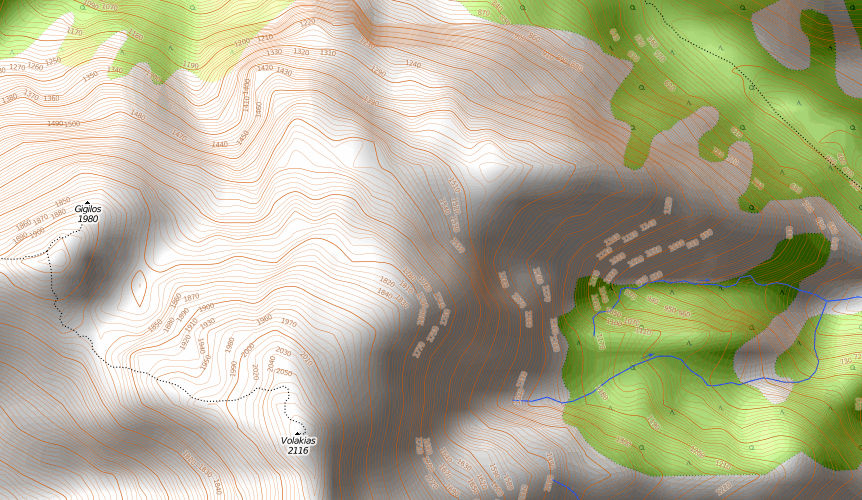 The Walk: Gingilos is an awesome mountain that stands at over 2000 metres high in the fabled White Mountains of Crete. When you approach it by car or bus on the only road available (with precarious steep winding roads: drivers beware, some of the bends are unprotected and a big drop awaits!) up to the higher reaches this magnificent massif stands out as a darker mass than its surrounding neighbours. Rocky outcrops shimmering in the Cretan heat resemble strange beasts and give the mountain an eerie edge. It just makes you want to climb it, and during my honeymoon that is just what I did. My wife also made it to about 200 metres from the top. It was a fantastic surreal walk. 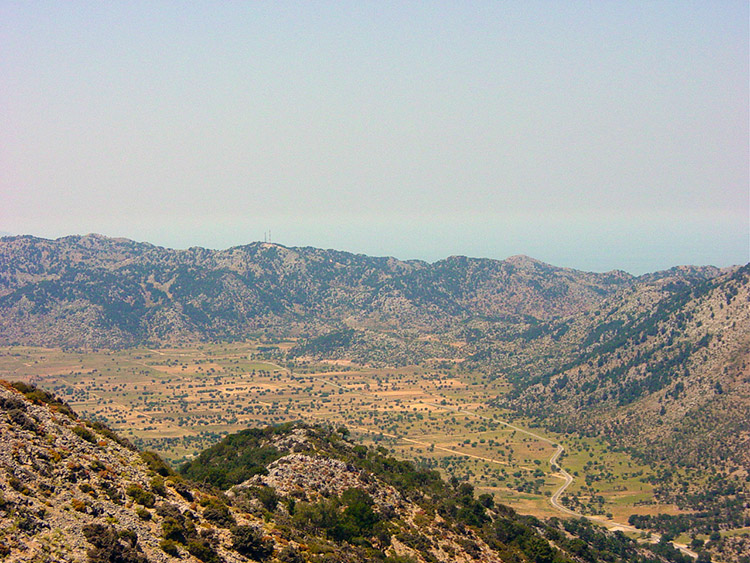 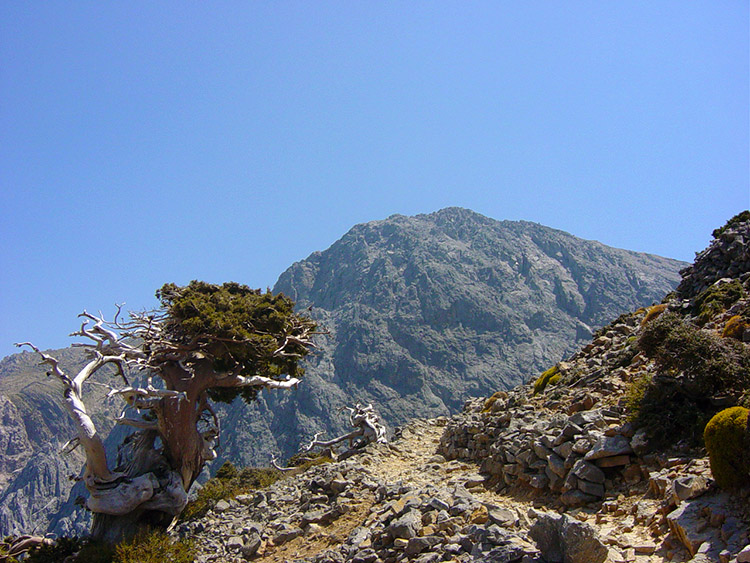 We started our ascent of Gingilos from the exact same point as walkers begin the walk down the very popular Samaria Gorge. "Too darned hot for us in that bowl, we'll go up into some fresher air" I say. Lil just sighs and steels herself for the task ahead of her. "Come on wife (of a few days!) I'll look after you" Lil is now reassured we set off into the unknown. At the starting point head up to the Lodge building above you at the very end of the windy road. It's the extreme furthest point to which a vehicle can go and its from here the path goes up following a distinct and well walked path. It also has a sign pointing to the 'Linoseli Footpath' so follow it with confidence. The path starts steeply and we climbed for about half an hour by which time both Lil and I had taken a few 'get our breath back' pauses. The views we enjoyed while doing so were well worth the effort. 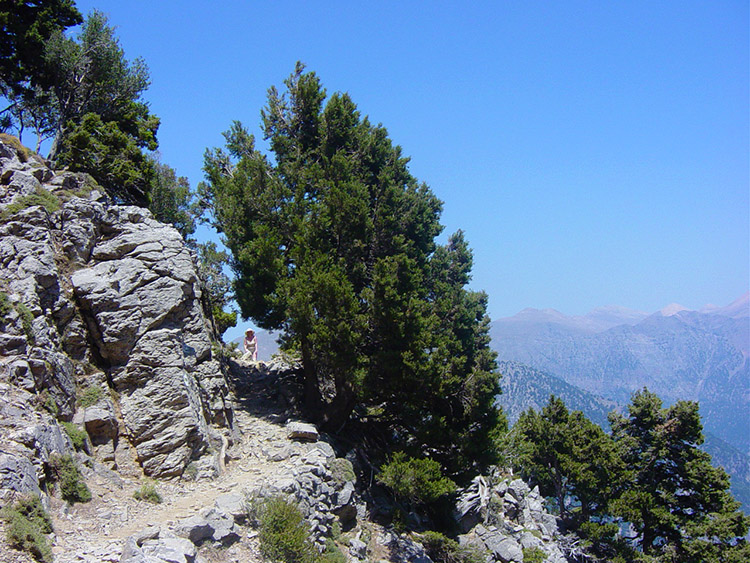 The path to Linoseli Col 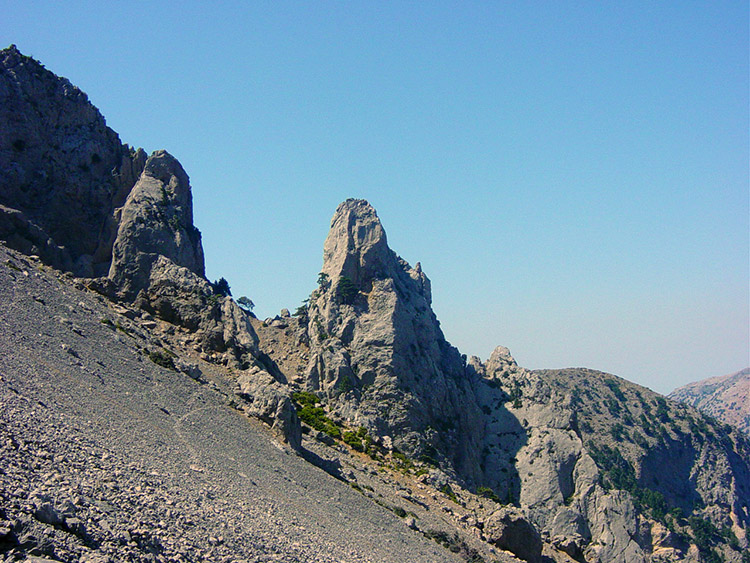 The lunar landscape of Gingilos

The drops from the path were precarious so it was very prudent to stick to the path. The views of Samaria Gorge below us were fantastic and the views of the mountain terrain awesome. One moment we could be looking at windswept trees clinging to the edge of the mountain and the next at weird obelisk shapes formed by weathering of the mountains rocky formations. I was in walking heaven and Lil admitted she was really enjoying it too, just so long as I took my time and did not leave her behind. I wouldn't dream of it, this was a fantastic walk we were going to enjoy together. Every corner we turned left us facing more fascinating sights. We continued on and upwards to enjoy our mountain walk. 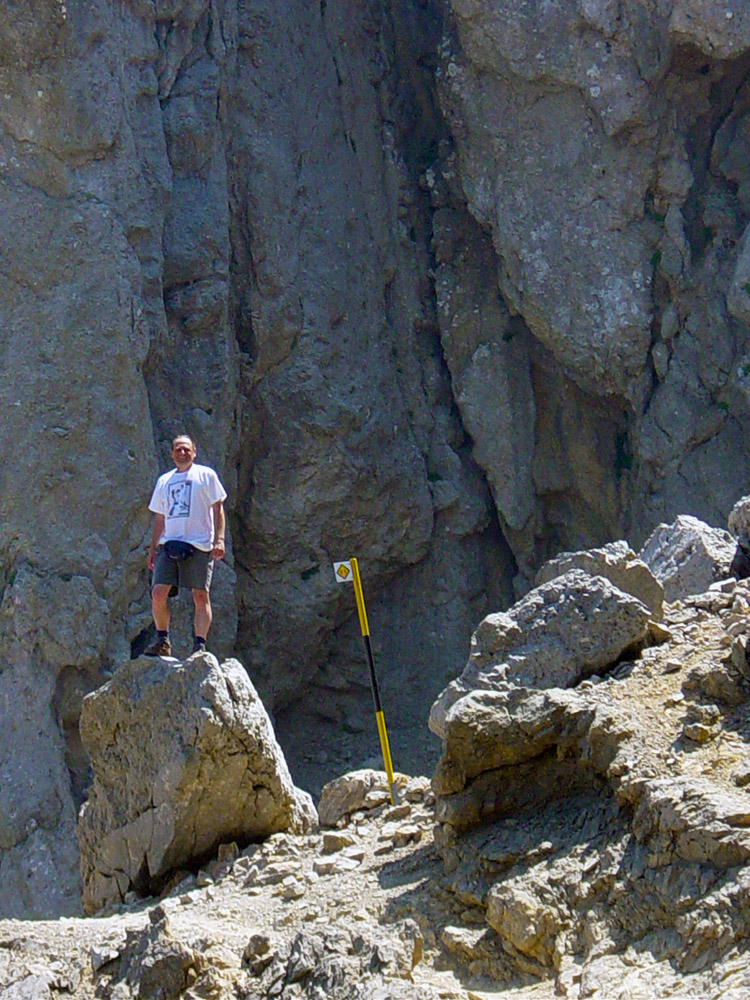 Stood on one of the mountains many obelisks 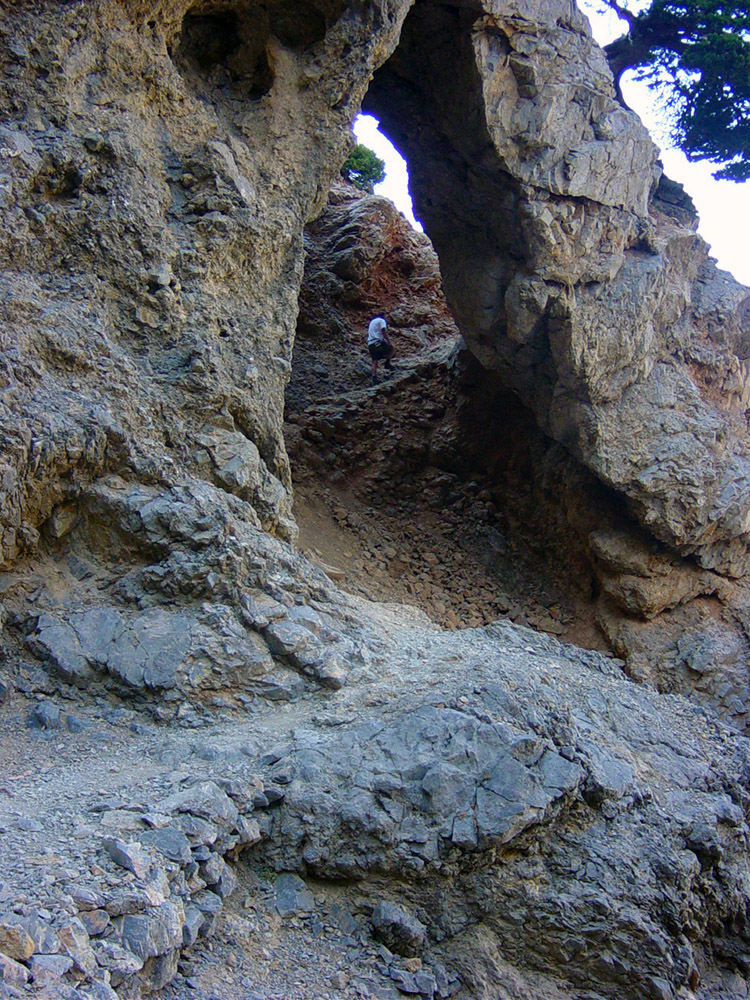 A natural archway shows the way up the mountain

About halfway on the ascent we reached what was to become our favourite part of the walk. The area was covered in rocky obelisks towering up from the ground like classical gods. A bit too poetic you may think but they are a sight to see believe me. Just look at the two pictures above this passage. They look extraordinary. The rock arch is pretty fantastic to say the least and it makes you wonder how its shape became so fashioned. 'These are magnificent dramatic rock faces, peaks, boulders and formations' says the Sunflower guide book. That's why I came up here and I totally agree with them. Anyway, enough said and after a snack break whilst Lil and I soaked all the scenery in heavenly silence as we were alone up here I beckoned my wife on with "Let's go, time to attend to the summit". 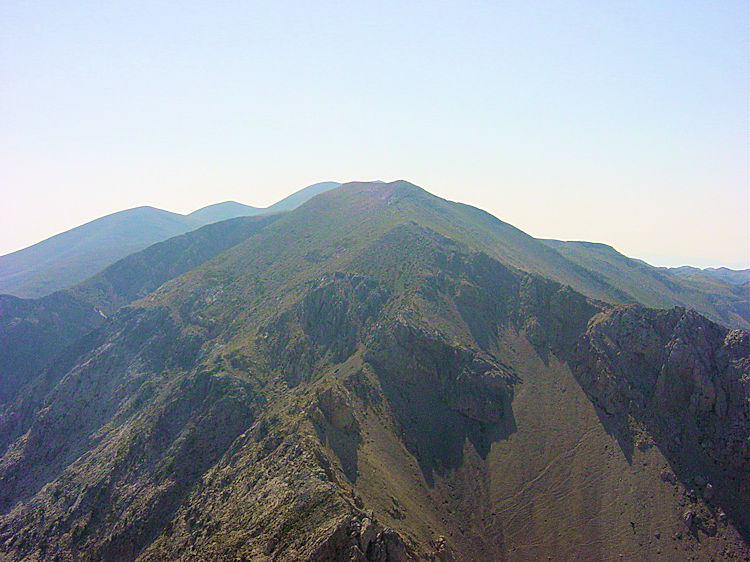 View from the summit of Gingilos 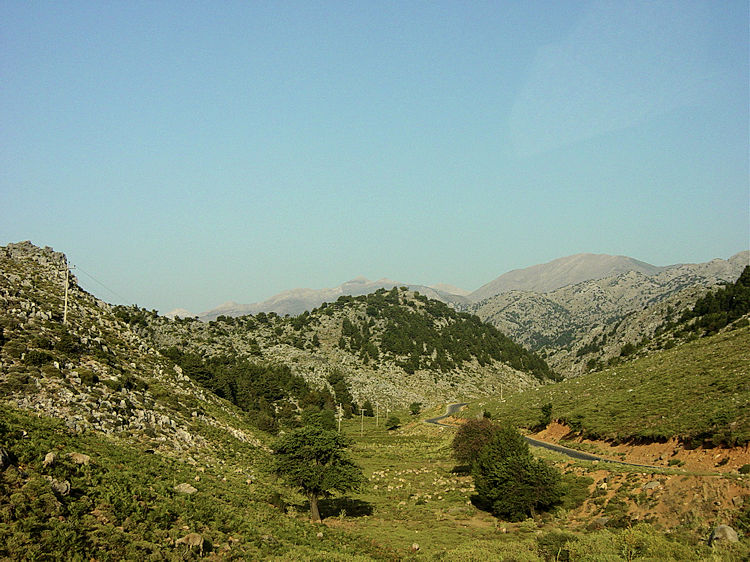 And so we continued up on a steep zigzagging path that was to lead us up to Linoseli Col. As we began the climb we met a German couple and their two teenage sons who were also enjoying the Gingilos ascent. Lil was finding it a little tough now but not giving up. It was a hot day, the sun was blazing down and she hadn't walked in a while. but she kept soldiering on towards the Col and I was proud of her. After zigzagging along the path on an enormous scree slope for some time we eventually reached the Linoseli Col and remade our acquaintance with the Germans. Entente cordial as we all enjoyed the views from the Col together and then they bade us farwell as they headed back down the mountain. Lil was staying put at this point and I resolved to reach the top. So up I went to the summit from where the final photographs were taken. The pull to the top from Linoseli is stiff but short with some unavoidable scrambling but it is not too difficult and marked in red dots and arrows. I reached the top, took the pictures, took in the view and then headed straight back down as I did not fancy driving down the mountain in the dark. The walk down was lovely but we had to be brisk and when we got back to the start we enjoyed a coffee at the refreshment cafe. Lovely! I recommend this walk to any walkers who plan to visit Crete. It is a fantastic mountain. You will absolutely adore it.