Summary: This half-day or summer evening walk is full of interest from start to finish. Starting out in the village of Elterwater the walk heads south-east by following the route of the Cumbria Way along the edge of Elter Water to arrive at the first waterfall on the route, namely Skelwith Force. Staying with the Cumbria Way the walk heads to the second waterfall, in fact a series of them at Colwith Force before deviating from the long distance path and keeping a west course past Stang End to Cathedral Cave and then to the famous Slater Bridge in Little Langdale. On crossing the stone bridge the walk heads north-east on lanes and rough tracks back to Elterwater. 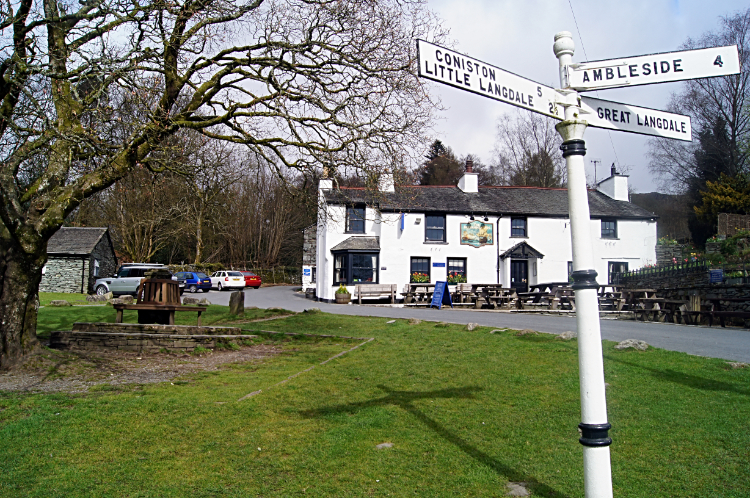 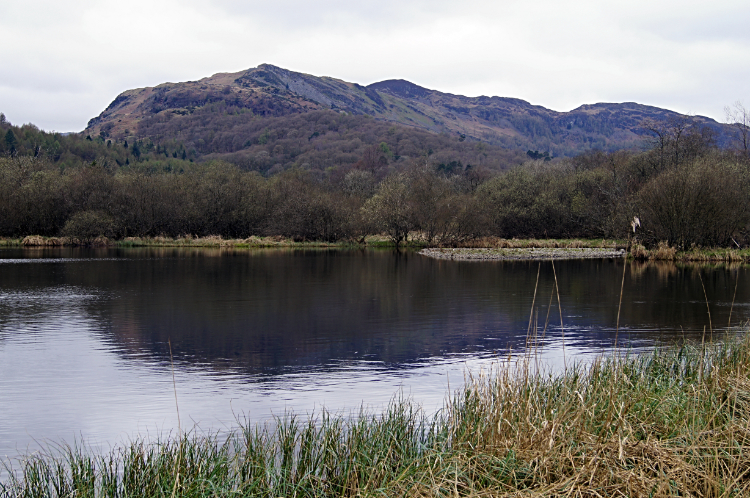 Off I went a walking on a cloudy day but the lack of sunshine could not dampen my high spirits as I excitedly strolled along looking left and right and straight ahead. There were many highlights of the walk to look forward to such as cascading waterfalls and the echoing whispers of caves yet the first mile was spectacular too. A real bonus. The first half was exciting as I watched Great Langdale Beck hurtle downstream towards Elter Water. The noise of rushing water is always a thrill and I watched the rush of it over rocks. Natural music at its best. Then on my reaching of Elter Water I took the opportunity to take a path leading right off from the main Cumbria Way path to track down a water gully to the lake edge and watch the stirrings in complete silence. The view across the still water of early day to the Furness Fells was sumptuous. Especially as I had it all to myself. I could hardly pull myself back to the path occupied by other people. 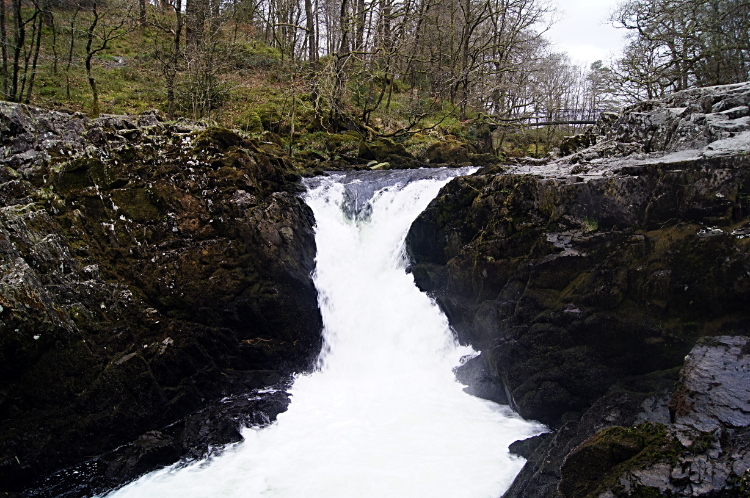 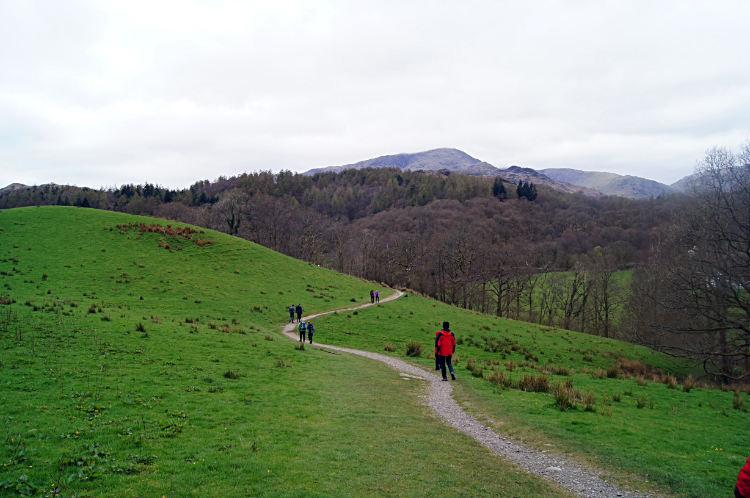 After another delightful five minutes walking beside Elter Water and five more minutes alongside Great Langdale Beck I arrived at the small but powerful cascade of Skelwith Force. The last time I had been at the waterfall was over ten years ago and it was a welcome return. I stood watching the powerful force for five minutes before heading off, still following the Cumbria Way over open low fells to Park House. My course was now due west; as it would be for the next two and a half miles. Other walkers were spread at regular intervals along the path. Most were heading my way with the odd few going the other way. 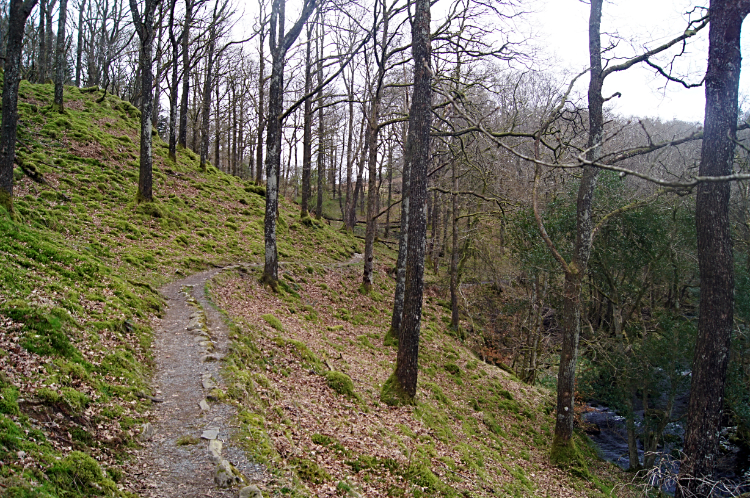 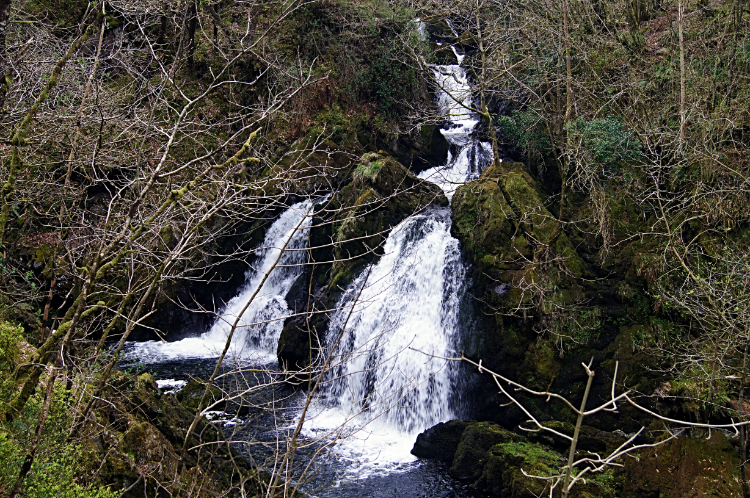 From Park House I continued on past Park Farm to reach the B road linking Elterwater village with the A593. On crossing the road my walk went from one of crossing open fells with views to the mountains in the distance being available to one of being closed in. I was now on a walk through the woodlands. Here the walk also subtlety changed from rolling but relatively flat to one of distinct climbing. I was going to be going up and ow now, mostly up, until the steep final half mile descent back into Elterwater. The first climb was of Colwith Brow which led me to my second waterfall. Colwith Force is a favourite of mine. I had first visited it in the 1990's and again in the early 2000s. I love the setting, in a deep ravine within the dense woodland. 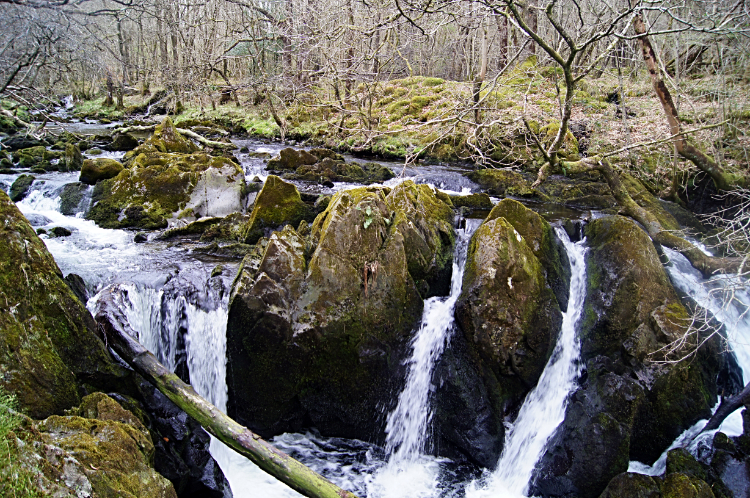 Cascades of the River Brathay 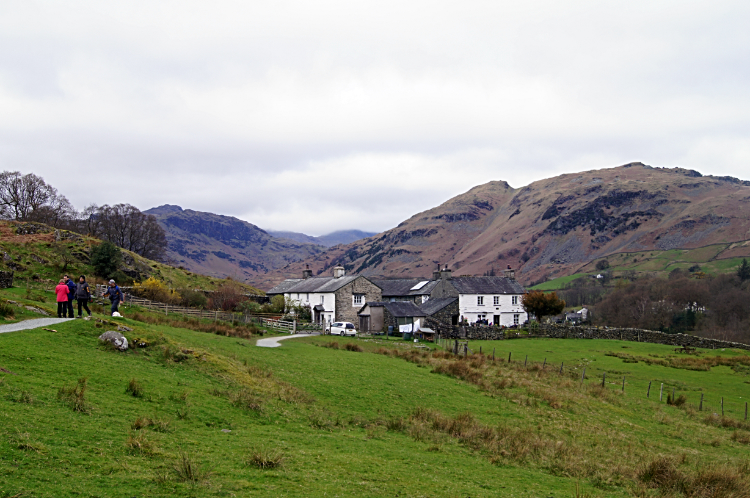 From Colwith Force I followed the River Brathay a little further to a small unnamed waterfall of about half a dozen separate cascades. It was another gorgeous water feature and the last cascade of the day. As with Skelwith Force and Colwith Force I paid it the complement of five minutes contemplative viewing. Thereafter I followed the way out of the woods and back to the resumption of open views by walking on to High Park. It was time for a cup of tea. 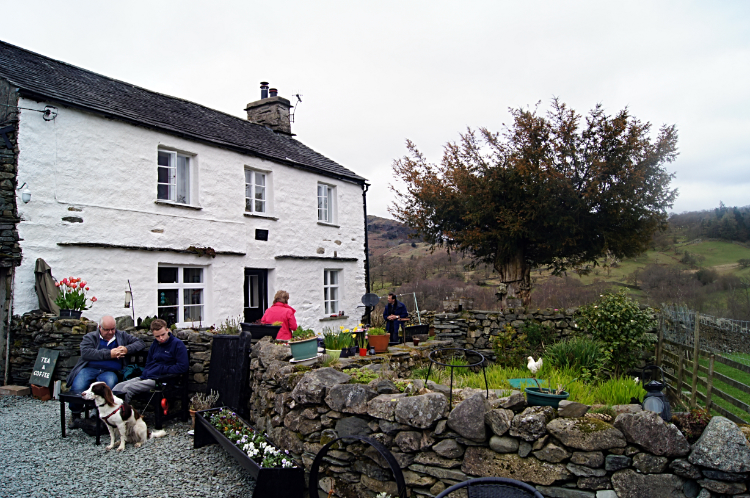 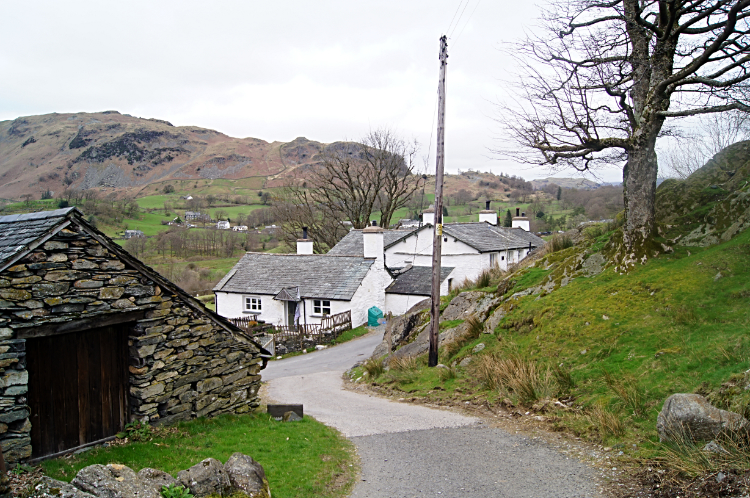 High Park Tea Rooms and Tea Garden is a popular spot to take a refreshment break. Sitting with other walkers who were enjoying their day and chatting with them about the lovely local sights and scenery was very pleasant. A small group I talked with, like me, had headed here from Elterwater and after their tea break were heading straight back. "I am going a little further yet. To the cave and to the wonky bridge". They knew exactly what I meant. After finishing my cuppa and bidding them farewell I carried on my way, still keeping on a course west to Stang End. 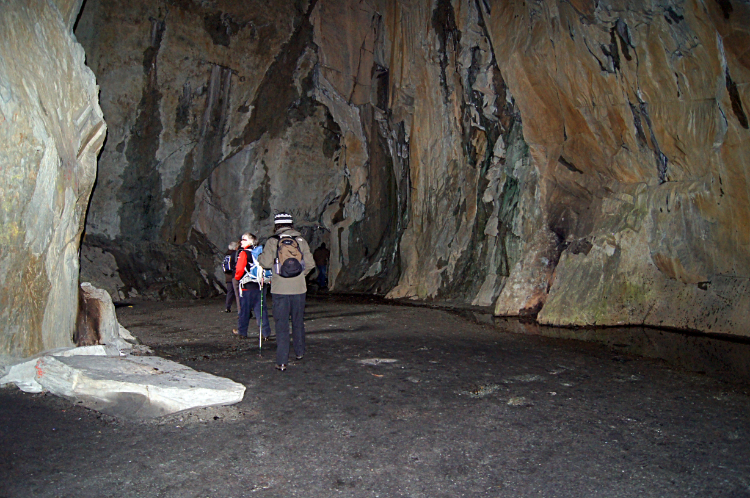 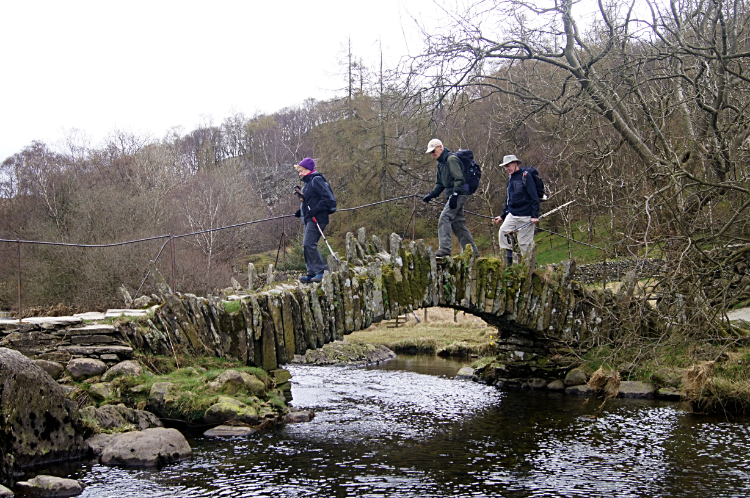 The last time I had walked this way I had turned to head north from Stang End to explore Yew Crags. This time I kept going on the same course as I wanted to revisit Cathedral Cave which I had last visited on a snowy walk of the Furness Fells. I was also determined to cross that wonky bridge this time around. I had done so once before in the early 1990's but my memories had dimmed of that day. First up was Cathedral Cave, a magnificent natural theatre, carved out by man for all the quality slate available within. I wonder how many roofs are made of Cathedral Cave slate? Plenty I am sure and I would not mind my house being kept dry by the natural hardy material. One thing is for sure. What is left as a legacy from the mining work is magnificence. Much mining activity leaves scars on the landscape. Not so here, a work of art has been created. Within the natural cathedral the acoustics are fine enough to host a small concert. And the hole in the roof. WOW. 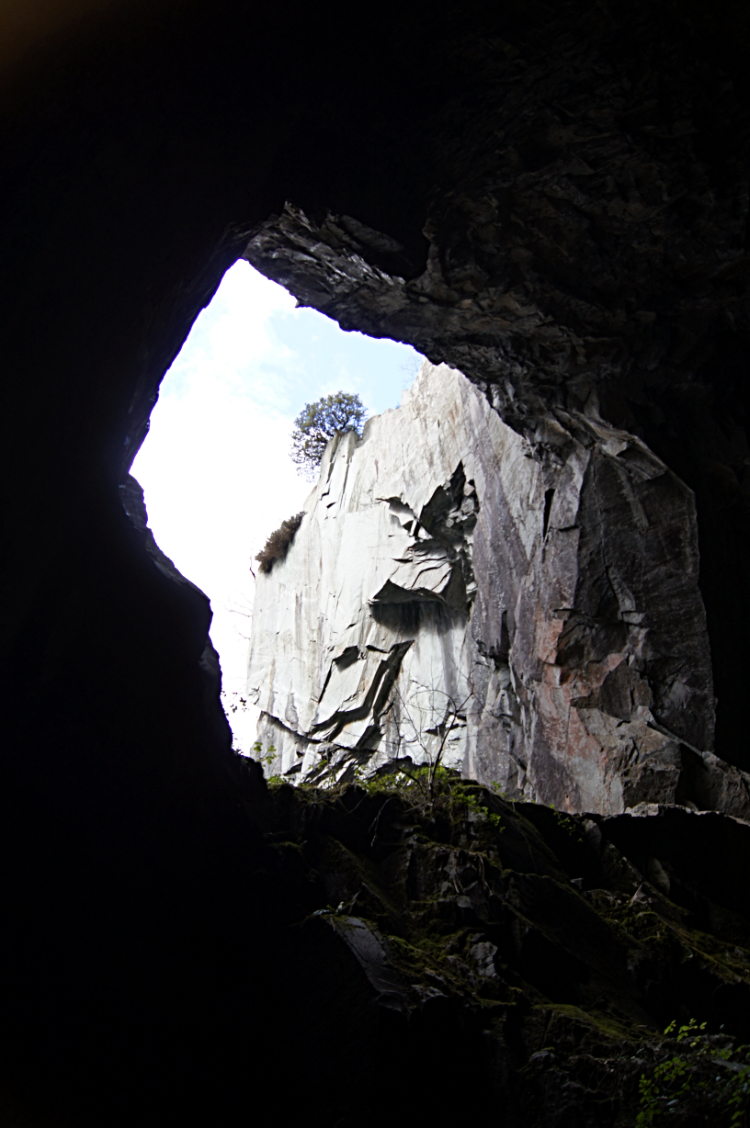 Looking up to the sky from Cathedral Cave 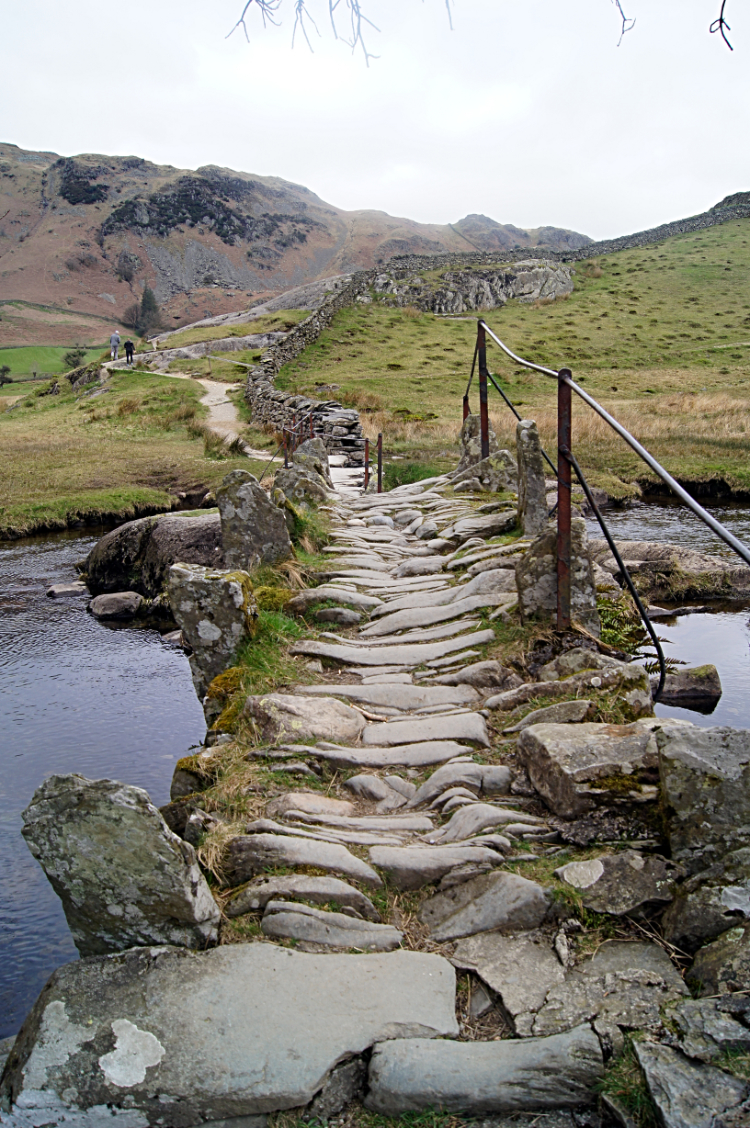 The uneven path over Slater Bridge

After Cathedral Cave comes Slater Bridge. I defy anyone not to love this quirky packhorse bridge which dates back to the seventeenth century. Health and Safety officials would have kittens on seeing the bridge and were it in a more populous place I bet there would be garish safety signs in vivid yellow and blacks festooned around and upon the structure. Thankfully the isolated location of the bridge and the common sense of those protecting the bridge with listed building status in 1967 has saved it such an affront. It is beautiful and in my eyes it is perfect. 'Note: Slater Bridge on the maps. Slater's Bridge in some publications. Take your pick; the map designation suits me. 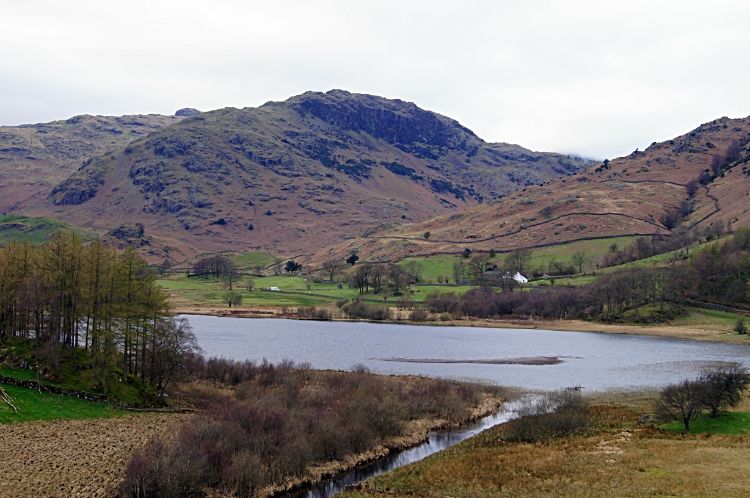 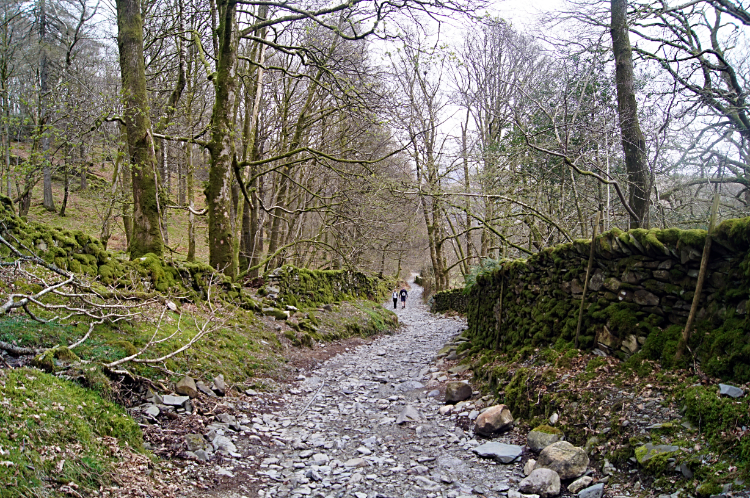 The way back to Elterwater

All that was left to do on the walk after the magnificence of three waterfalls, an awesome cave and the brilliant old bridge was the walk back to Elterwater. The first bit was super in itself and an unexpected bonus. The view from the north side of Slater Bridge to Little Langdale Tarn and Lingmoor Fell was breathtaking. As with the waterfalls it was another of those stop and stare moments for me. Great stuff. After my fill of the incredible view I continued n my way climbing to the highest point of the walk at Dale End/ Howe Banks and at the same time the start of the final phase of the walk, the hard stone track descent back to Elterwater. All the height gained in nearly five miles of walking, 110 metres in elevation, was lost in the last short mile home.