Summary: I discovered the beautiful rural village of Timble during my days of being a water company inspector in the second half of the 1980's. It was more a privilege than a job as I got to meet the local characters and work in the scenic surroundings of the Washburn Valley. The valley and local moors is very popular with ramblers from the Leeds, Bradford and Harrogate areas as it lies less than 10 miles from each conurbation. Close to my home it is perfect for me to visit for a short impromptu walk if the weather suits. Just as it did when I persuaded my wife Lil it was about time she came for a leisurely walk in the valley. Enjoy the walk with us. 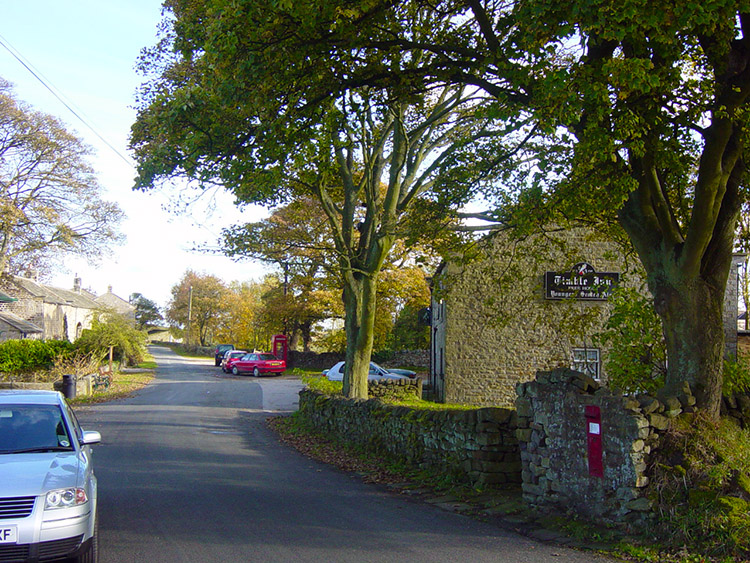 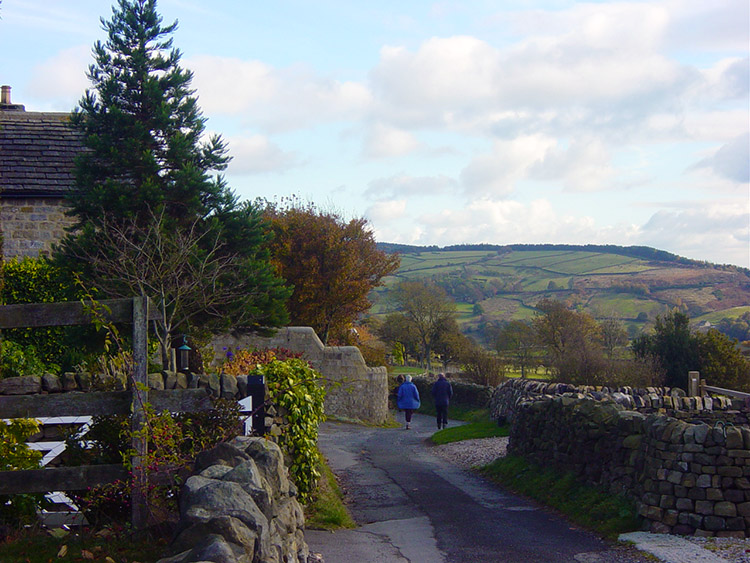 Setting off from the village

Timble is a popular spot for walkers as there are numerous footpaths reaching out in all directions from the village. It is the allure of the village and the welcoming sight of the unpretentious Timble Inn that draws walkers here. What better way is there to spend a Sunday lunchtime than walking a few miles in great countryside and finishing off at a cosy local inn with a drink? As always it attracted walkers. We were to meet many on our walk round the area. It was a Sunday so after a leisurely breakfast and read of the Sunday newspapers we went for our walk. 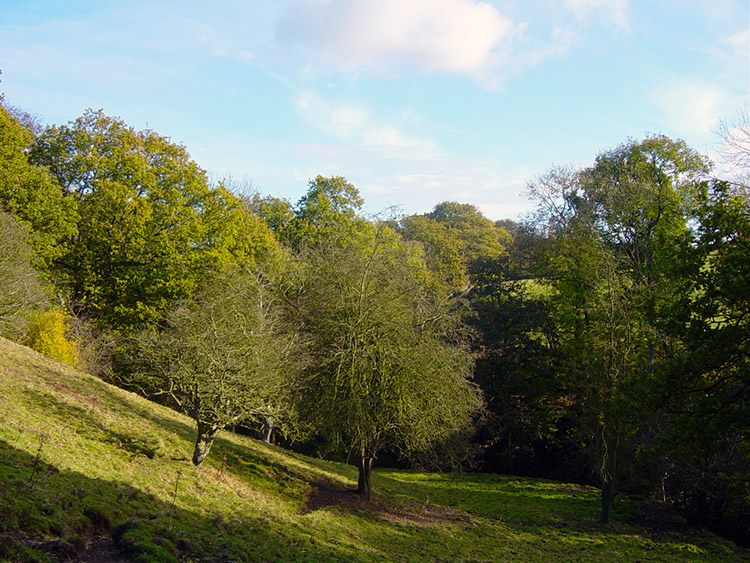 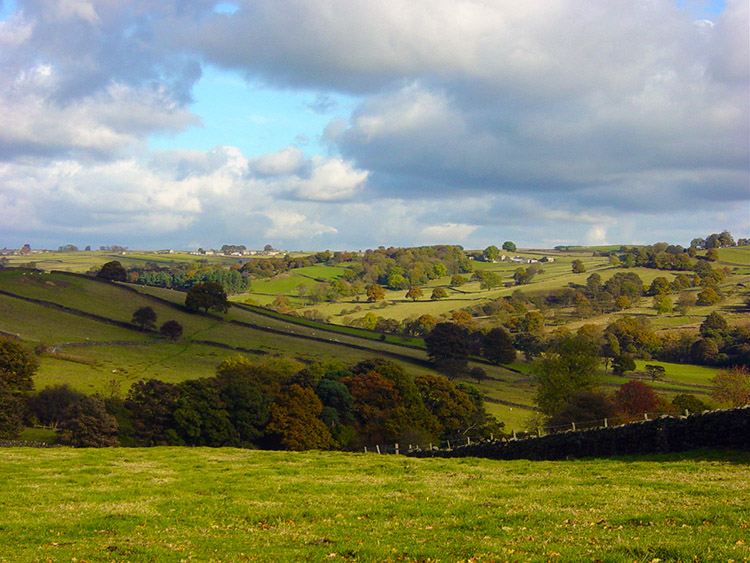 We arrived in Timble at a fairly tardy 1.00pm (Lil had a lie in this morning - plus 1 hour clock's back - totalling 12 hours in bed!) so wasted no time in getting prepared and setting off from the village centre in a easterly direction down a lane to High Field Farm. At the farm we followed a bridleway southwards then cut off it due south down fields to a wooden bridge that led us around a distinct round shaped hill. Redding Hill in a different place is the type of hill you would expect to see a Castle atop. It is the perfect oval. We skirted the hill to Low Snowden then up to Washburn Farm which had a sentry. Lil saw him first. I said "I am getting a stick to carry through the farm". She said "He's lying low waiting to pounce". I was relieved to see the sentry was tethered. True to form he jumped up and leapt for us snarling, teeth dripping with saliva, cursing that the chain was short. What a relief. We left the farmyard unscathed and headed across fields, passing close to Carr Farm and continuing downhill across fields towards the dale of Snowden Beck. 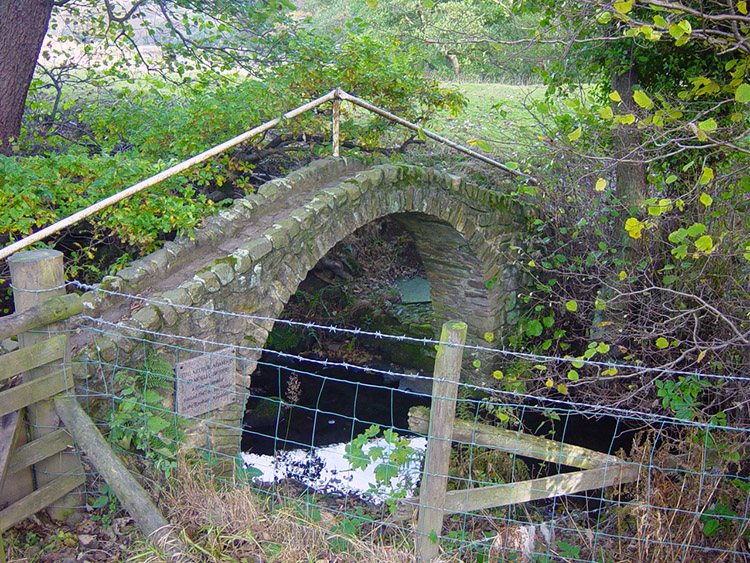 The bridge built in memory of Arthur Adamson 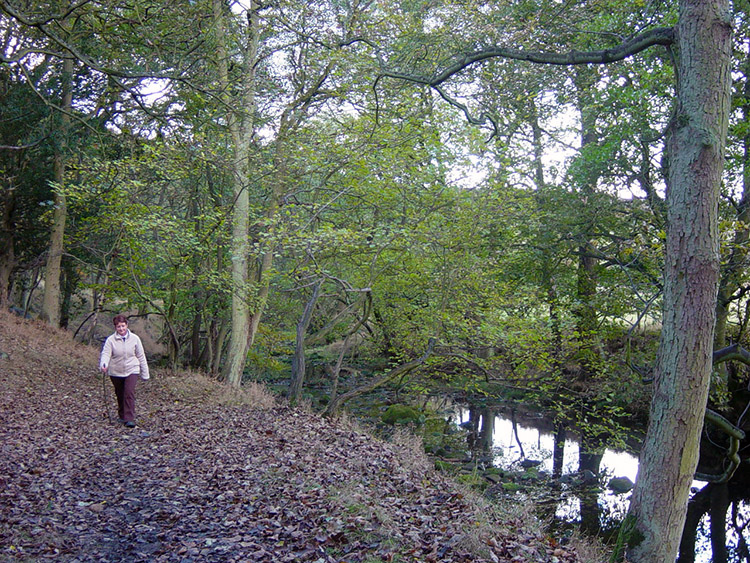 Beside the River Washburn

Walking down to the dale was a wonderful moment. The trees were losing their leaves, winter was around the corner but still the trees were providing fantastic almost luminous golden brown colours before they closed down until spring would wake them up again. Halfway down the bank we stopped for a while to look at Ellers Wood and Folly Hall Wood which were on opposite banks of the River Washburn. The colours were just fantastic and every tree in the densely packed wood slightly different in shade. Truly a great scene to take in and enjoy. After taking it all in we moved on down into the dale and then turned left just before reaching Midge Hall Farm to follow Snowden Beck downstream to the River Washburn which we also followed downstream towards where it would discharge into Swinsty Reservoir. After a while we crossed the river by means of a marvellous stone bridge. On the bridge a plaque read 'THE ARTHUR ADAMSON MEMORIAL BRIDGE a lifelong rambler erected 1967 by his friends in the Ramblers Association'. Arthur Adamson was a Leeds Alderman and must have been a popular man to have such a magnificent tribute built in his memory. The bridge is sturdy, built of Yorkshire grit stone and narrow letting only one walker across at a time. It is quite obvious the walker will appreciate such fine craftsmanship. It is a delight. 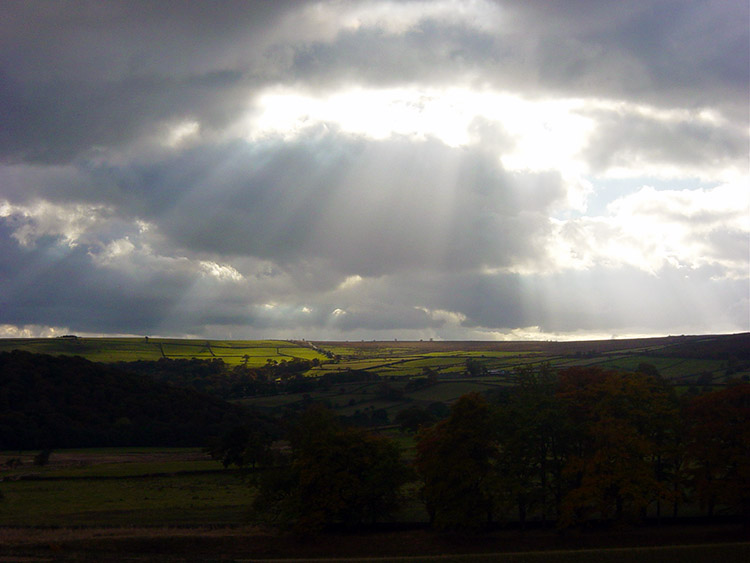 Glint of sunshine over Farnley Moor 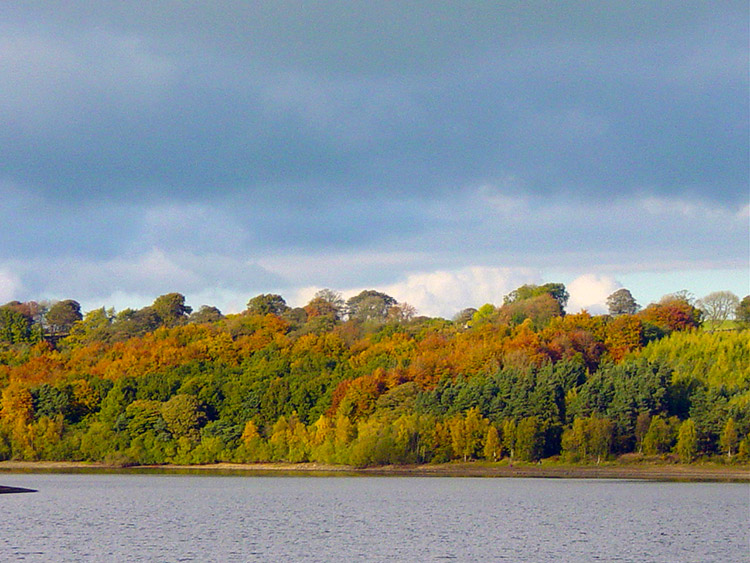 After the bridge the walk continues northwards along the River Washburn to Swinsty Reservoir Dam Embankment. This is another nice section of this short but highly enjoyable walk. We walked along the riverside track on a carpet of fallen leaves meeting a few fellow walkers. We passed words and all remarked on the lovely scenery we were walking amidst. This late October day was dry, a little cool but the sun quite often broke though to share its warmth. 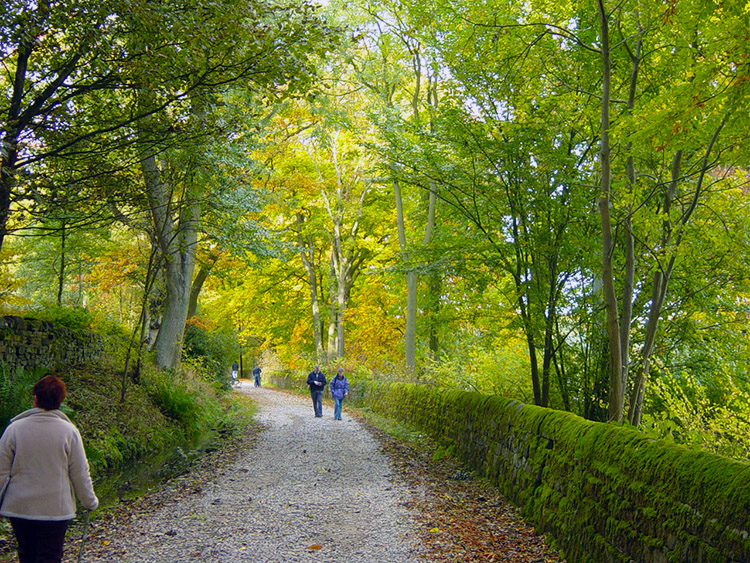 Lil ambles on the path near Swinsty Hall 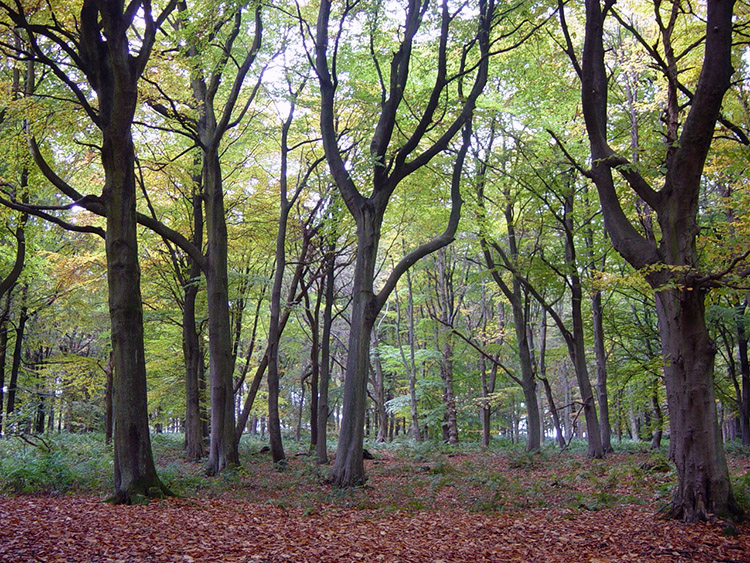 When the sun did break through, as it did intermittently during our walk it really lit up the trees and fortunately it did so again as we crossed the Reservoir Dam which led us towards the woodland of Swinsty Moor Plantation. After following the bridle road that surrounds Swinsty Reservoir we cut off just after Swinsty Hall into the heart of the woods. This was another special time as the sun could now pierce the tree canopy a little easier as the trees had shed an abundance of their leaves. Every breath of wind blew off a few more and as we walked through the wood it was like walking through a colourful rain. It was a shame when the woodland section ended and we emerged into open fields again. One more highlight was to come though, quite unexpectedly. 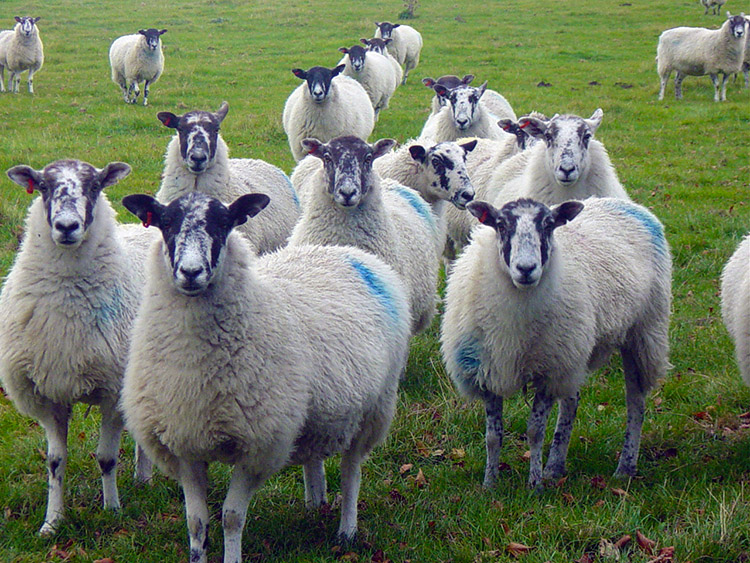 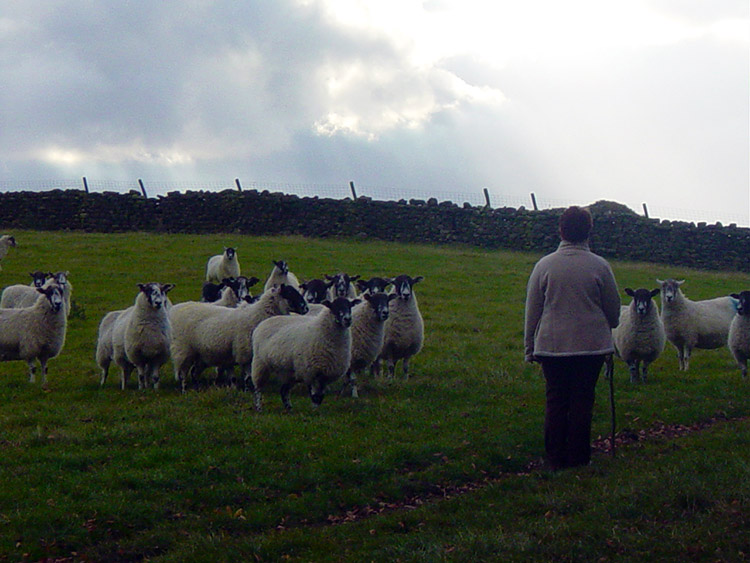 Are you one of us?

The last few fields on our return to Timble were filled with sheep. Usually the sheep will steer clear of walkers but eerily this time they came towards us, in their droves. Why, we wondered but then we surmised it must have been Lil's fleece they were attracted to. True enough, as I stepped away they came up to her, really close and just stood with her, looking directly at her. It was a really uncanny moment and one we will not forget in a hurry. 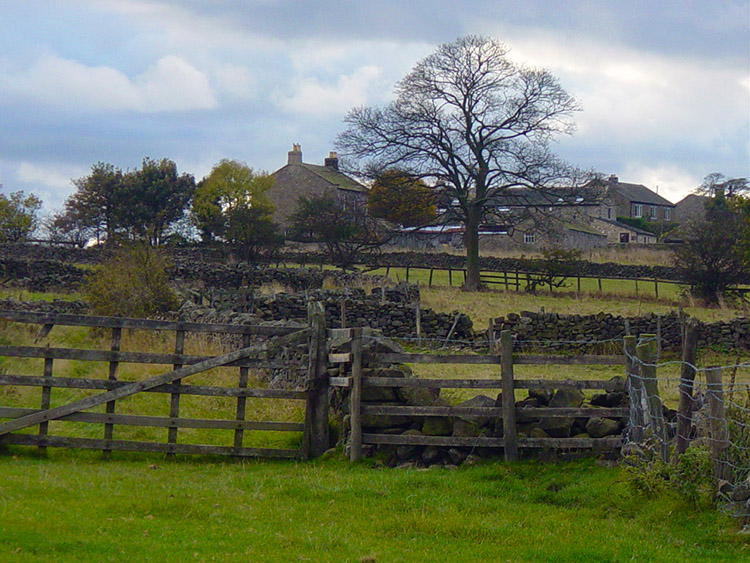 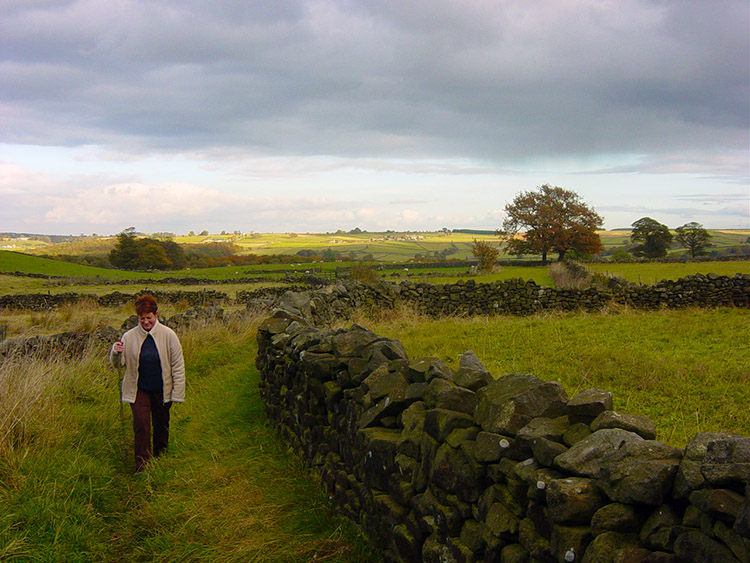 After my wife's friendly encounter with the sheep we walked on into Timble regaining the track we had originally left the village by. Lil was ready for a drink now and so we walked to the pub and enjoyed a drink and a snack in the fantastic small village pub that had ignored technology. And it was much the better for it.