Summary: This walk is started from the quiet village of Markington situated between Harrogate and Ripon. from the village walk north over fields to Ingerthorpe and then continue following the Ripon Rowel Walk route past Markenfield Hall before turning west and follow paths into Studley Deer Park. Relax and enjoy yourself in the beautiful surroundings of the park which is home to a Deer herd, Swans, Geese, Moorhens and Ducks. Leave via St Mary's Church towards Fountain's Abbey where a visit can be made for an admission fee. Afterwards continue along Monk Walk towards Sawley before heading off the road south across a secluded pond (via a raised bank) before finishing this lovely walk on paths and finally road back into Markington. The walk provides a delightful day out. 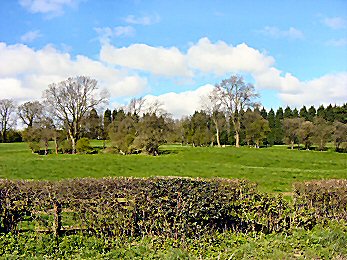 On the path from Markington near Ingerthorpe 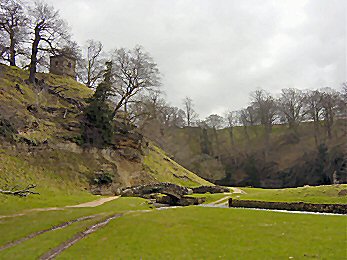 April is the month when spring finally breaks the grip of winter in Britain. In April the roadside verges sprout up with wild grass, nettles, docks and dandelions and the hedgerows begin to turn from woody into green. And it is in April when the trees begin to break out with new shoots bulging and breaking out into leaf. Low level trees are the first to show the vitality of a new season as the shade they enjoy which upland ones are denied and the warming sun encourage their sap to rise. It is a perfect time to go for a walk and so I did. I had arranged a walk with my friend Joe. We had planned to walk in the upland Yorkshire Dales but we did not go. Instead we stayed in the low green meadowland between Harrogate and Ripon. Why? Because it was blooming freezing! The weather had been nice the previous week and England saw temperatures rise to 18 Celsius. Now an windy arctic current had taken over the British Isles and although it was set fair the daytime temperature never beat 5 degrees. We declined to go high. 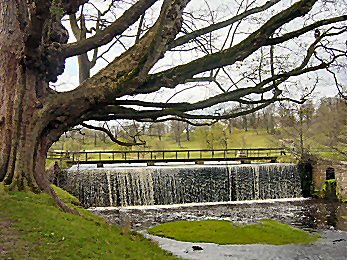 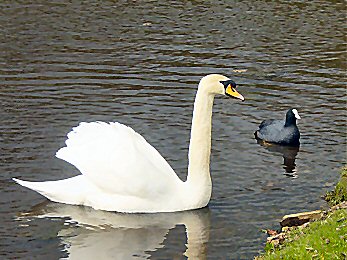 So what could we do for an interesting day out? I looked at the map and soon found this lovely walk in the country just to the south west of Ripon. The walk included a stroll through Studley Park and it also closely passed Fountain's Abbey. I had never walked in this neck of the woods before and neither had Joe so the decision was made and off we went. I drove over from Leeds to Burley in Wharfedale and picked up Joe. Then we drove past Harrogate and onto Markington which is just off the Harrogate to Ripon road. We stocked up on provisions at the village shop and parked up in the village near to the start of the planned walk. After putting on the walking gear we were on our way. It was so cold despite the sun shining and Joe was soon wishing he had brought a hat. Luckily I had. 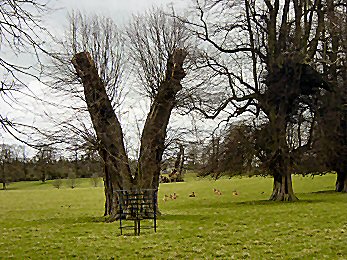 Surely this tree was trained into its rude gesture 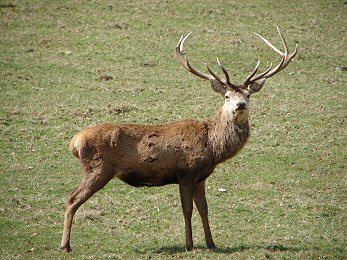 The walk took us out of Markington along a short track which led to the village playing fields. We passed around the edge of the football pitch and continued on north over a few fields before we reached the small village of Ingerthorpe. The roadsides and hedgerows in this secluded area were already beginning to turn green as the first photograph shows. we also saw bluebells in the small wood coppice's around Ingerthorpe as we left the village by continuing north on the Ripon rowel walk past Markenfield Hall and onto Whitcliffe Hall. Just before we reached the hall we turned west and entered woodland just to the east of Studley Park. We soon turned again, this time walking in a northerly direction until we reached the River Skell. We were now entering Studley Park. The next mile took us on a delightful walk in a westerly direction through the park while we crossed a number of small bridges over and over the river. As we walked along we ventured close to a small herd of deer who made a swift escape to the far bank of the River Skell on seeing us. We left them in peace and made our way to Studley Park Lake. 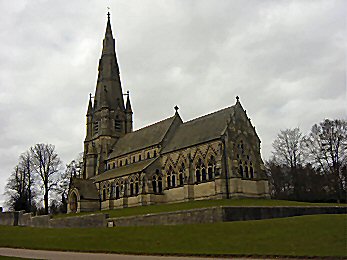 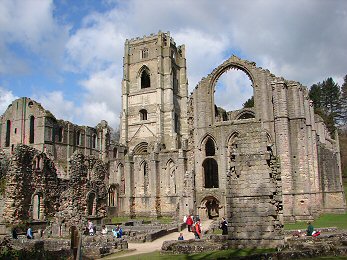 At the lake we relaxed for a while and enjoyed the attention of some very friendly birds which included a couple of geese, a small group of ducks, a swan and a moorhen. Unfortunately we had no fare spare to give them but they remained amiable all the same. after our encounter with the birds we walked off from the lake towards a larger and more sedate herd of deer and then on upwards to St Mary's Church. The church is a wonderful building in the grounds of Studley Park sitting proudly in the higher area of the grounds. There is a obelisk close to the church and we passed it to reluctantly leave the park. It had been an enjoyable and visually pleasing experience walking through the grounds. On leaving the park we took a south westerly course along a roadside towards the Studley Park visitor centre. Passing it by, we continued on towards Fountain's Abbey. The park and abbey are very close to each other and are now both linked as a World Heritage Site. The abbey is the most visited in England, attracting more than 300,000 paying visitors each year. We were not visiting Fountain's but merely passing by. We took a slight fork of the path to gain a vantage point and get a picture of this most popular of Abbeys. 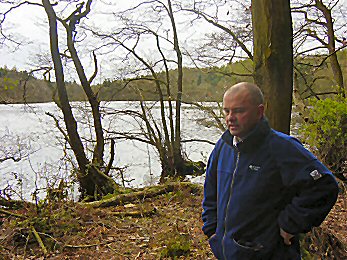 Joe rests by a secluded pond 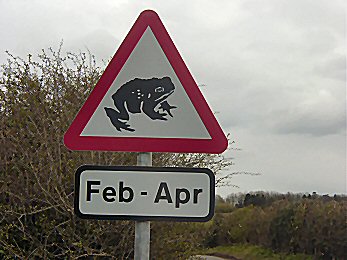 Watch out, Frogs about!

The walk now took us from Fountain's Abbey took us west through Skell Bank Wood for about 800 metres where we emerged on a quite country road which leads from the abbey to the village of Sawley. We cut left on the road and then soon forked right to follow Monk Walk road before following a path south over fields and across a hidden fish pond via a fisherman's bank to Foal Cote, once a farmstead but now, as so many are, being converted into separate dwellings. We continued from Foal Cote over fields towards Haddockstones for 800 metres and then cut east to cross a road then walk past a copse to a quiet road which would lead us back to Markington. As we walked along the road we came to a quirky road sign warning us to watch out for frogs! (see picture) As it was still April we expected to be in the midst but none we saw, their mating journey must be now done. Soon we were back in Markington at the conclusion of our lovely walk out. This walk is a fantastic lowland option in springtime - if only it hadn't been so blooming cold this day.