Summary: I have enjoyed this walk many times, usually in the company of my wife Lil. A delight all year round I prefer this one in Autumn when all the trees surrounding the reservoir are beautiful shades of brown, orange and gold. Also, in the Autumn you will often find groups of Geese on Swinsty Reservoir gathering in significant numbers after their migration from the north. 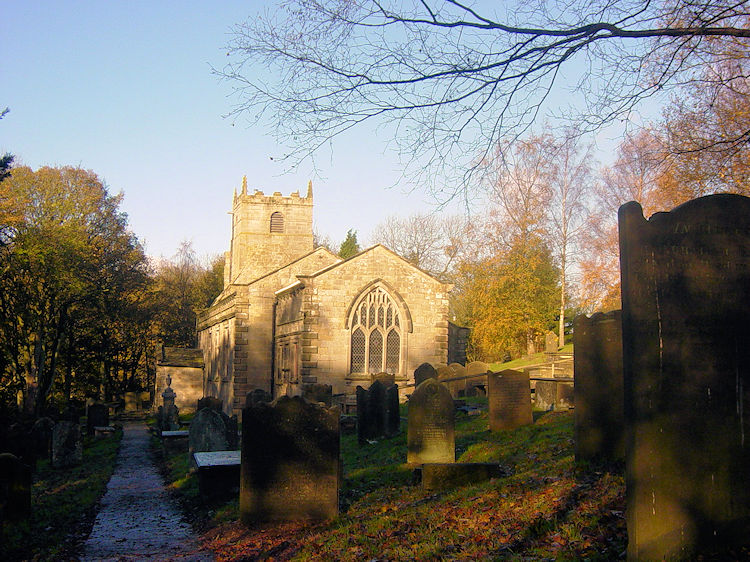 Fewston Church is near the start of the walk 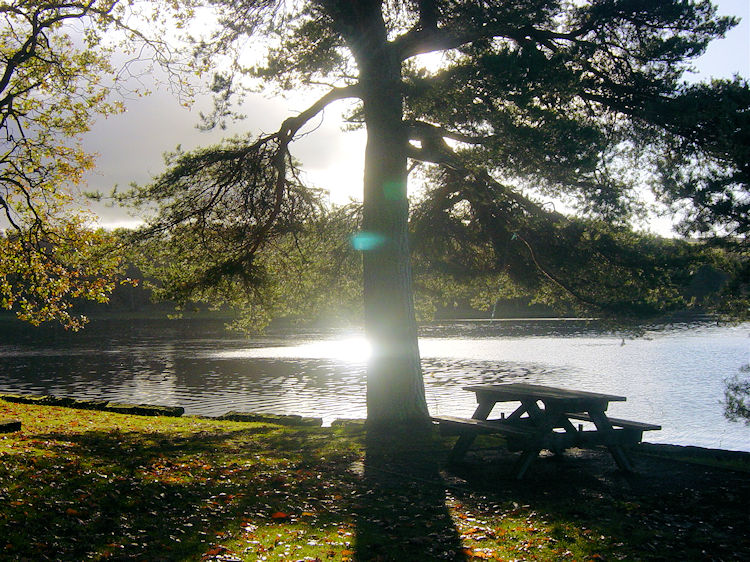 The walk around Swinsty Reservoir is a delightful excursion with the first stage of the walk, should you start as I did from the east side car park, providing the best unrestricted views across the reservoir. Swinsty Reservoir, like its neighbour Fewston Reservoir is always popular and probably more so as it is the nearer of the two to Leeds and Harrogate. However, both are equal in character and I recommend either. I have my preferred times for walking them though, Fewston in Spring and Summer and Swinsty in Autumn and Winter. Swinsty just feels that little more protected from the elements giving shade and extra warmth to walkers in the colder seasons. That is what I think anyway. On this particular autumn walk around the reservoir the leaves on the reservoir side trees were in their final throws of colour, the most sublime shades of browns, auburn's, oranges, russets and reds before casting them aside for the winter. Standing and just looking into them is always striking as is the spotting of gaps through the trees that were not there a few days previous. the thinning out process was in full swing. 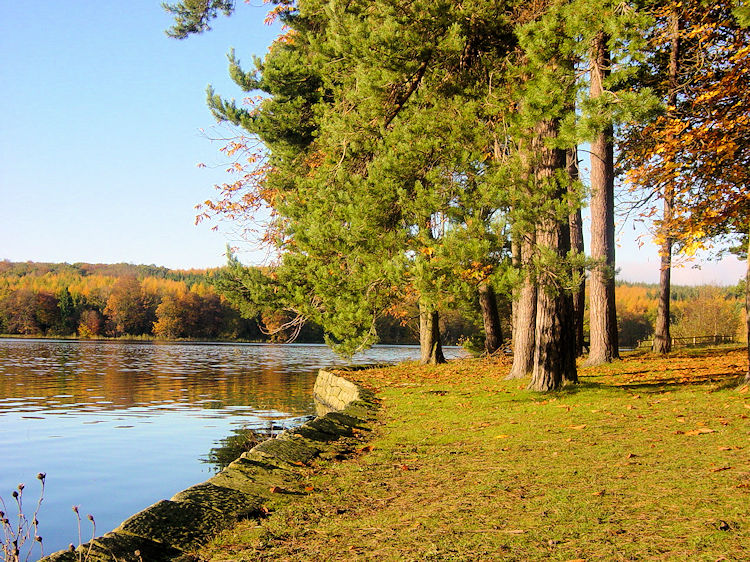 Beside the edge of Swinsty Reservoir 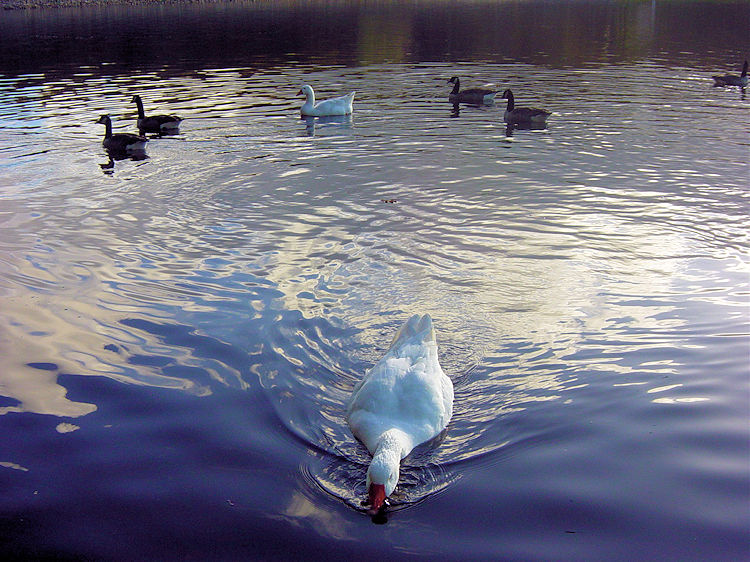 Residents hoping for a snack

My spirits lifted by the colours in view I walked briskly from the picnic area to follow an anti-clockwise course around the reservoir. The paths around are well maintained by Yorkshire Water and people appreciate the work put in to provide a clear way round. Natural viewing seats are also abundant on this first section and I passed two retired couples taking advantage at separate points as I walked round the north east bank and past the Grange toward Fewston Embankment. 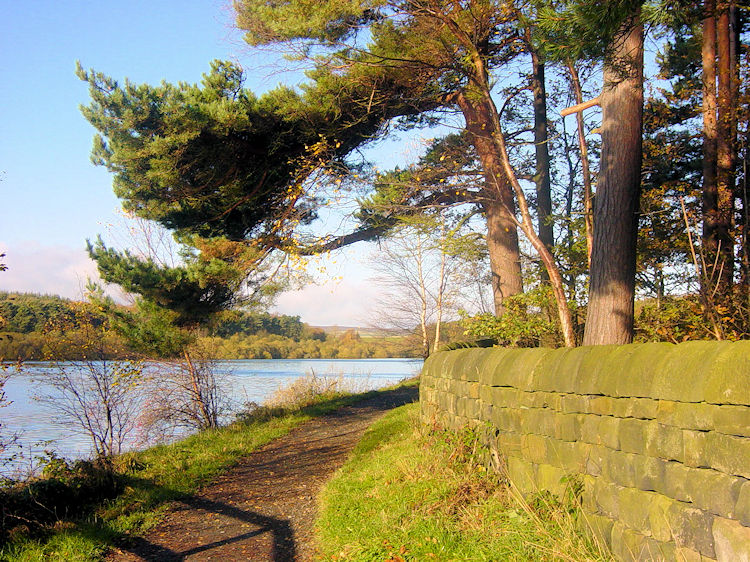 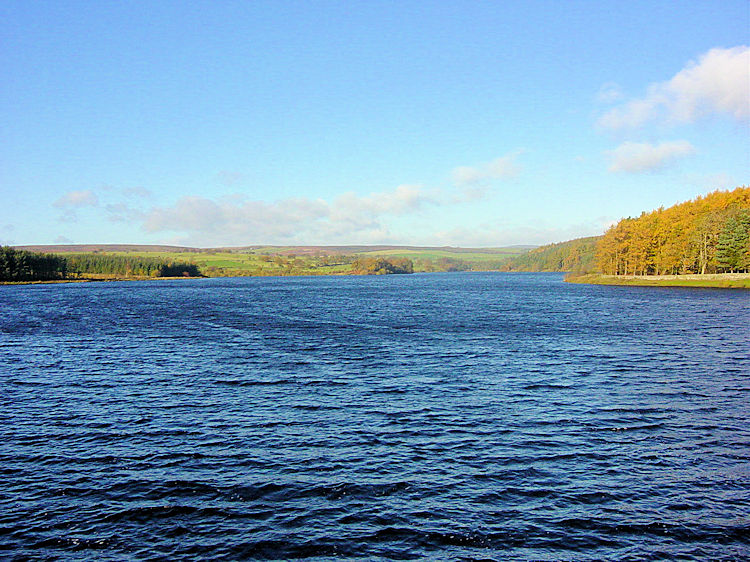 The walk along the reservoir side path was one of slight undulations, like walking on the line of the easiest roller coaster. The easily manageable ups and downs make for interesting walking which included points to view the full magnificent setting of Swinsty Reservoir. I enjoyed it all until I had to leave the waterside at the northern most point of the reservoir which heralds a short sharp climb of 20 metres to the roadside which led me to the crossing of Fewston Embankment. 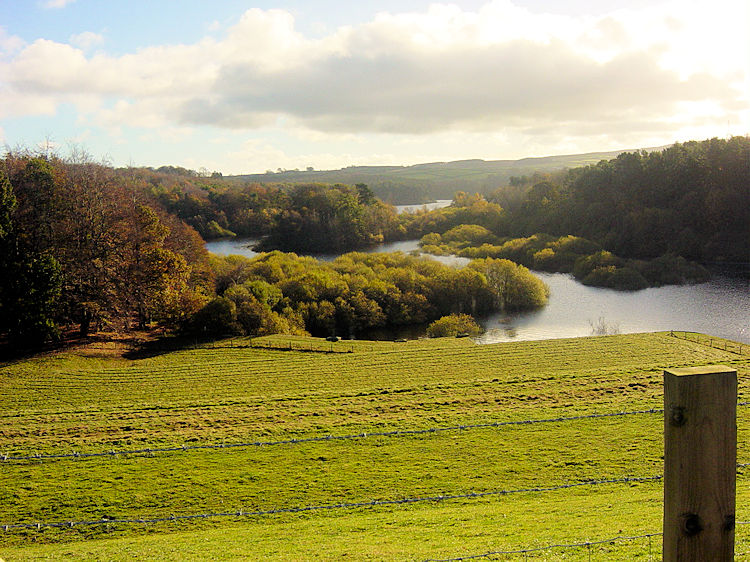 The view to Swinsty from Fewston Embankment 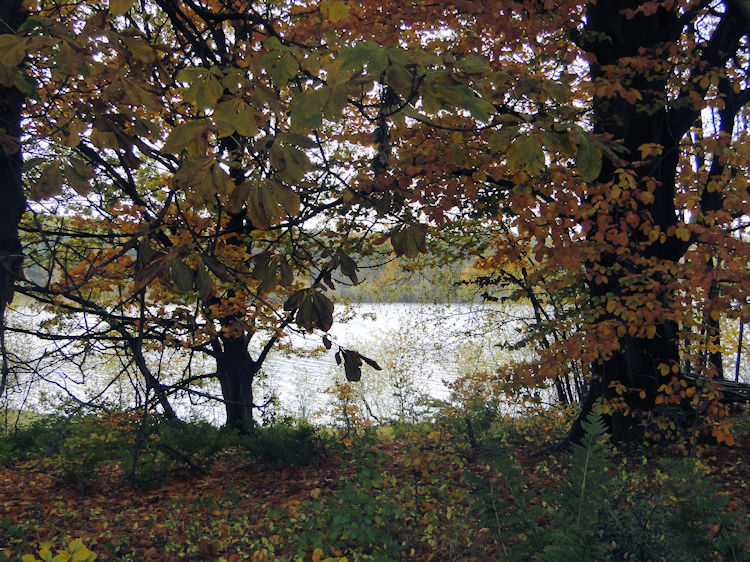 I crossed the embankment between the two neighbouring reservoirs of Fewston and Swinsty. The footpath on the west side invited me to take in the lovely view over to Fewston Reservoir with the Blubberhouse hills emerging in the west beyond the reservoir. I was drawn to cross the road though and also look over the wall to the east, looking down to the waters of the spillway running from Fewston Reservoir and along a tree lined river-way toward Swinsty. It made a beautiful picture causing me to take turns looking out east west and east repeatedly like the green cross code man advises when planning to cross a road. On completing my crossing of the embankment I climbed 10 metres to the Timble Road car park. The car park is a popular spot for it offers walks in many directions. One follows a course around the fringe of Swinsty. Alternative options are walks around Swinsty Moor Plantation, walks around Fewston Reservoir or even walks in the countryside around Timble village and Beecroft Moor Plantation. It is a good varied choice to take from the reservoir and there were a good number of cars empty in the car park with occupants no doubt spread far and wide on the walking options available. For me I continued from the car park through Swinsty Moor Plantation to Swinsty Hall from where I turned left to reach the walled track on the west side of Swinsty Reservoir heading toward Swinsty Embankment. 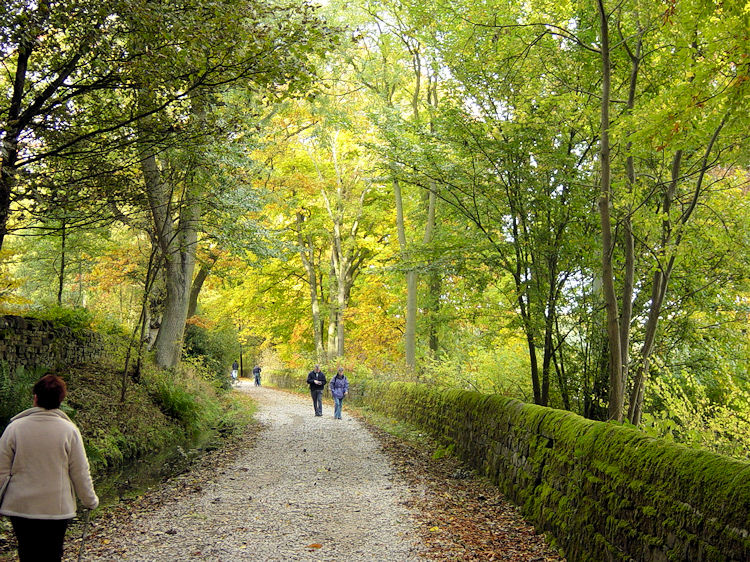 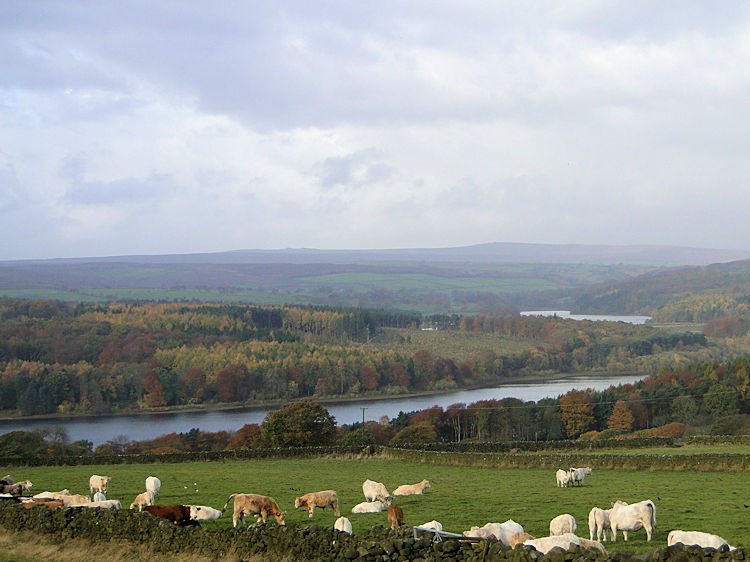 On reaching the embankment my attention was drawn south down the Washburn Valley and south east to Norwood Edge Plantation and its landmark communications tower. After a short breath and a drink break looking out that way I resumed by crossing the embankment from west to east, arriving at Swinsty Cottage. Here, when I was a Water Authority Inspector in my formative years a Yorkshire water colleague used to live in the cottage. I contemplated those halcyon days when as an inspector I travelled around these parts as the day job. Wrenching myself from my nostalgia and into the present I set on the final stage of my wonderful tour of Swinsty Reservoir by following the waterside path north and soon I was back at the road bridge which I crossed to get back to the car. I cleaned my boots musing on a lovely short walk just done. Having revelled in the colours of the autumnal trees I considered whether I might just do it next in Springtime. I think so.