Summary: I was fortunate to do this walk on a sunny and warm day in early September when the heather was in blossom. The scene I experienced on the upland moors was fantastic. The walk is a lovely round one of about nine miles from Lofthouse which begins by following the valley floor to Low Sikes before steadily climbing to the hamlet of Bouthwaite. After the hamlet a good track leads up to the moors which are enjoyed for five miles before the descent back into the Nidderdale valley from Lofthouse Moor. Look out for some interesting rock outcrops on the walk including two named after a mother and daughter. 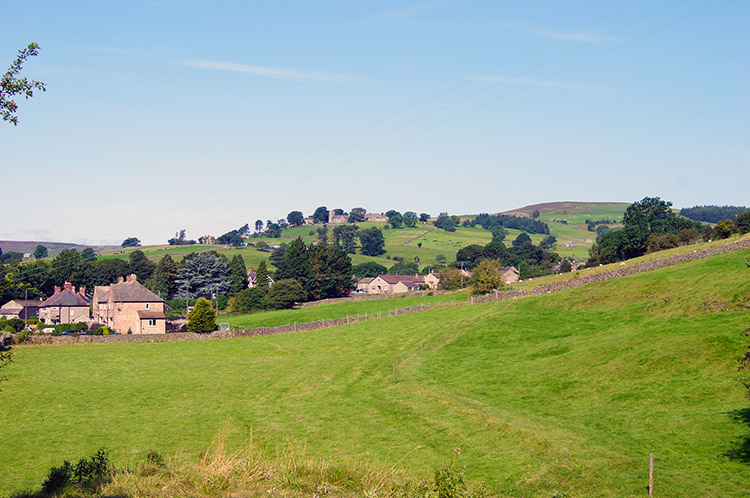 Looking back to Lofthouse 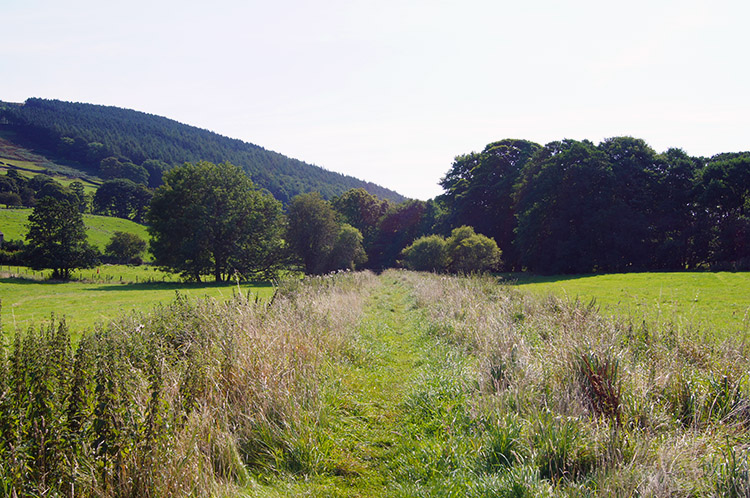 It was a glorious day with not a cloud in the sky as I made my way from Harrogate to Lofthouse. I passed some of the time during the 60 minute car journey anticipating gorgeous views over heather blossom moor; it was enticing to say the least. Once parked up in Lofthouse I was soon marching off by following the Nidderdale Way eastwards towards Low Sikes. It was mid morning and already the sun was beating down with energy, strongly so for the first days of September. I was revelling in the surroundings and briskly made ground on the level course to Low Sikes where I came to a point beside the River Nidd. From here the river headed down to meet Ramsgill Beck and flow into Gouthwaite Reservoir. I climbed a bank towards Longside House. 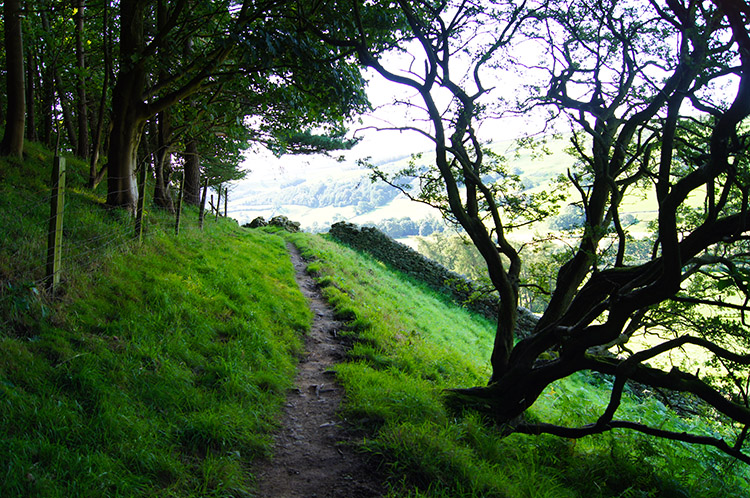 On the path towards Bouthwaite 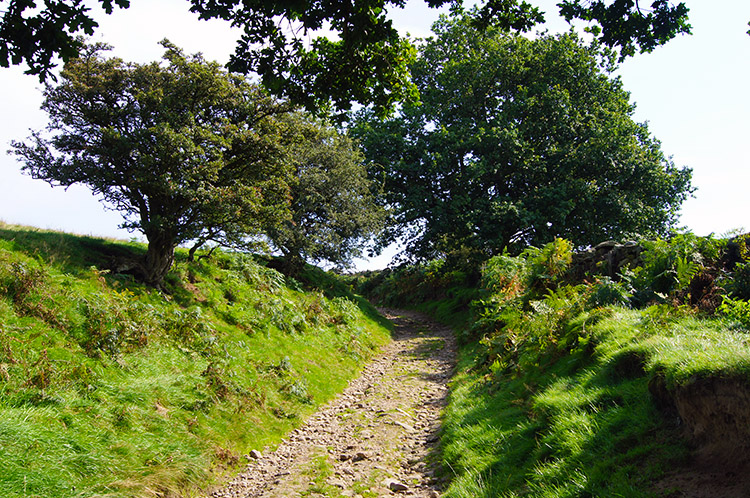 The climb toward Fountains Earth Moor

I had an encounter with a Grouse on the walk from Low Sikes to Longside House. As I walked along the track and beside a wood on my left I noticed about half a dozen Grouse on the track in front of me. To the left was the wood with a wire fence between the track and the trees. To the right there was a drystone wall. In the wood were more Grouse and a number of Grouse feeders. As I neared the birds they scampered along the track and dived into the wood through gaps in the wire fencing. All bar one that is which couldn't fashion an escape route. It could not continue on ahead either as a gate barred its progress so it was effectively trapped. I had no intention of harming it but the bird did not know that so as I neared it assumed a passive and motionless position, stooped down and wings spread in a fan shape, a position it maintained until I had passed and cleared the gate. I continued on without looking back, thus letting it recover from the ordeal. Soon after the incident I reached Longside House, then soon afterwards Longside Farm and soon after that I reached the quaint isolated hamlet of Bouthwaite. The village sits just above the valley bottom of Nidderdale and has lovely views across towards Ramsgill and Gouthwaite Reservoir. From Bouthwaite I began the long steady climb to Fountains Earth Moor by following a good stone track. 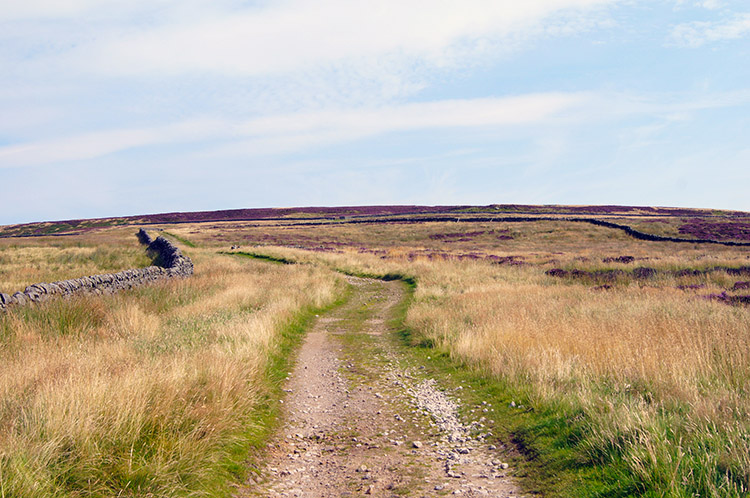 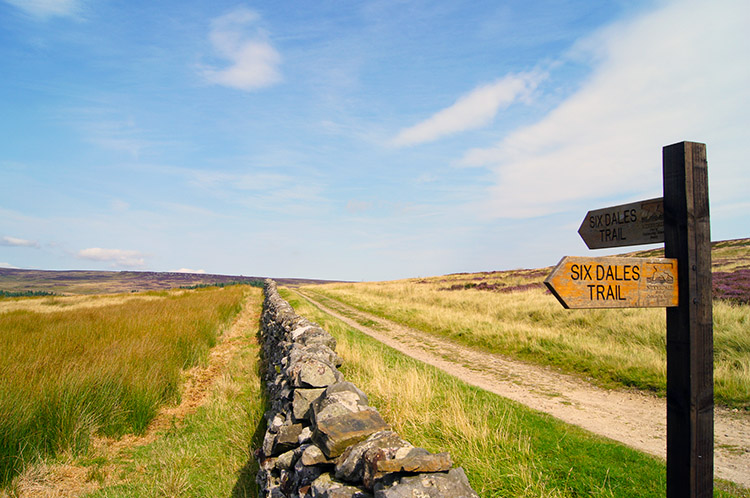 Signpost on the Six Dales Trail

The anticipation of walking in solitude on the high moors increased with every step I took. It was a steady haul up the bank, 150 metres of ascent in a mile of walking to reach the first moor plateau at 310 metres elevation where I took a course due north and parallel with Lul Beck to my left. I couldn't see the beck at this time, it was hidden in Helks Wood. Compensation for not seeing flowing water was the vast views opening out all around me with masses of purple carpeted moor beguiling me. I followed my course north and on the course of the Six Dales Trail to the heart of Fountains Earth Moor and Sype Land. 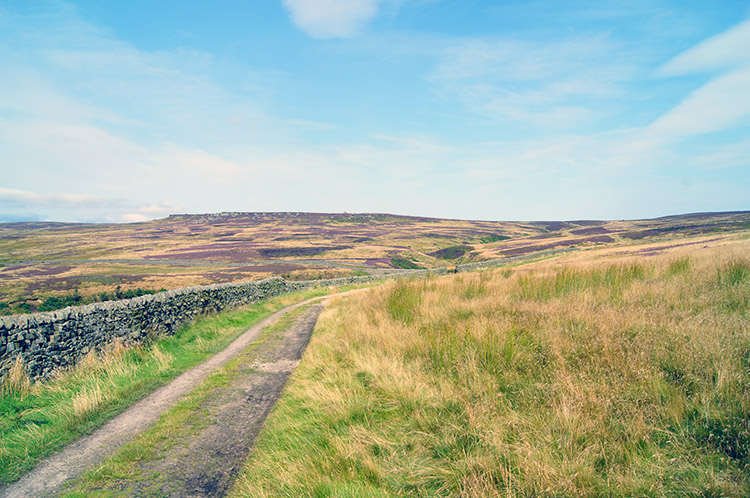 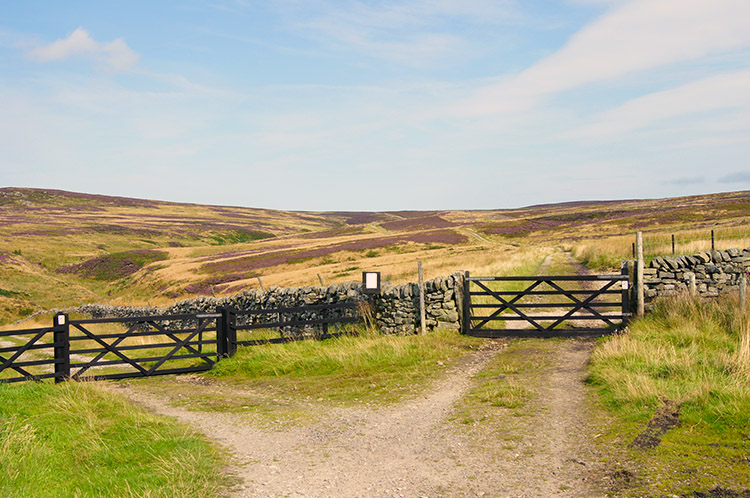 I took the high road to the right

As I walked my eyes were drawn straight ahead to a level stretch of rock outcrops on the distant horizon beyond the heather. I identified them as Sypeland Crags and I imagined exploring them before looking at my map and realising my course veered away to the right. Still there was another smaller outcrop I would walk right besides, namely Lulbeck Crags. Near Sype Land my course was confirmed and set by taking the right hand gate of two, the left hand gate would have taken me nearer Sypeland Crags. I will take the left most option another day. 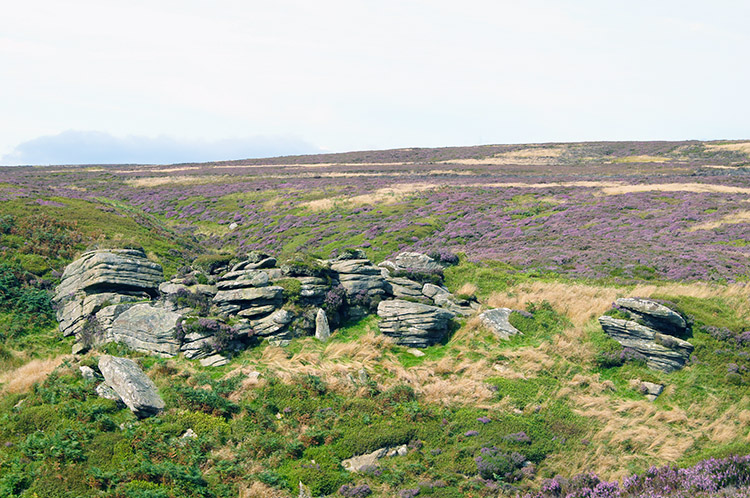 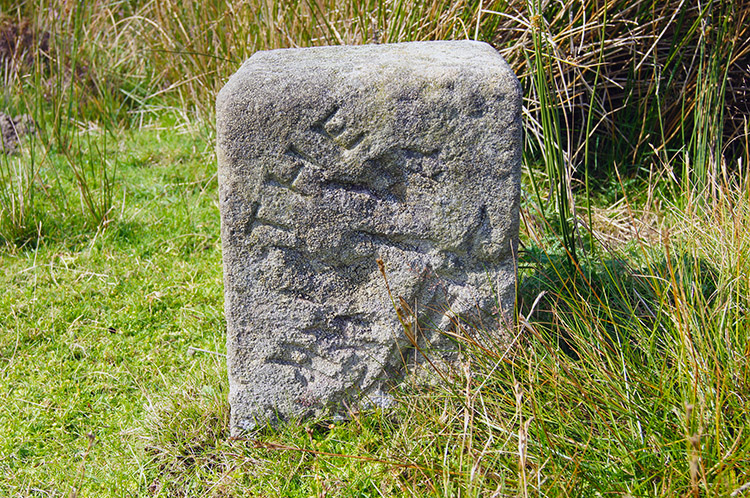 The mystery stone near Lulbeck Head

After clearing the gate I walked steadily up towards a higher plateau of moor by following a course beside Lul Beck. After almost a mile I came to Lulbeck Crags, an interesting group of grit stone outcrops which I explored for ten minutes before resuming my walk. I continued on towards Lulbeck Head and Combs Fell. While doing so I came to a stone marker beside the track. I could make out the first word easily. It read 'The' but the rest of the lettering was missing, not eroded but chipped away. I wonder what it said? 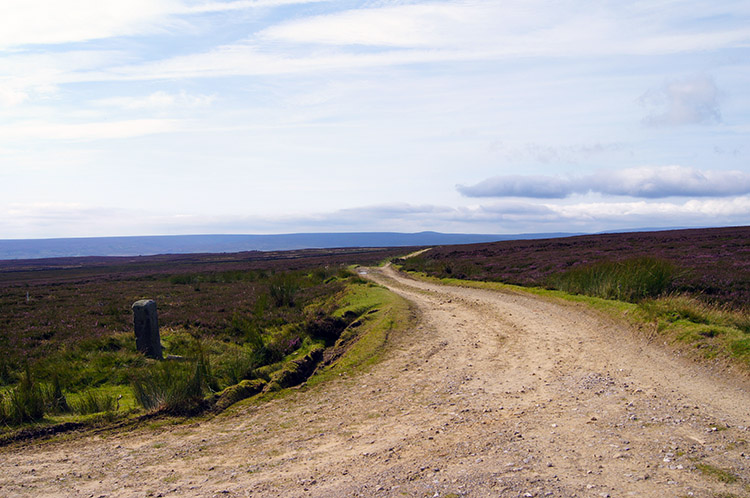 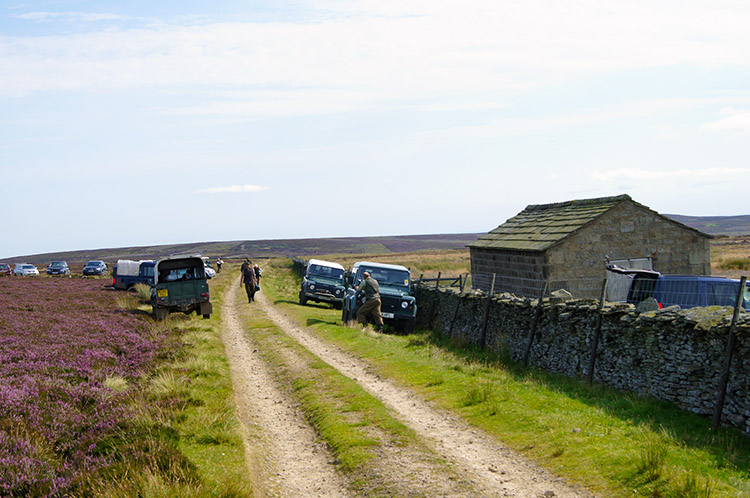 I took a sharp turn left and from heading north I was now heading west across Combs Fell. This was my highest point on the walk and with the height the views were at their most distant. However as I walked I looked closer in and looked for two features which I had intended to look for since I planned the walk. I was now in the same vicinity as Jenny Twigg and her Daughter Tib, two rock sentinels on Sype Land which overlook Upper Nidderdale. I had intended to leave the track and visit the outcrops up close but on approaching I noticed a party of Grouse shooters. It wouldn't be safe so my plans were dashed. So Jenny Twigg and her Daughter Tib are for another time, when I take that other track across Sype Land. 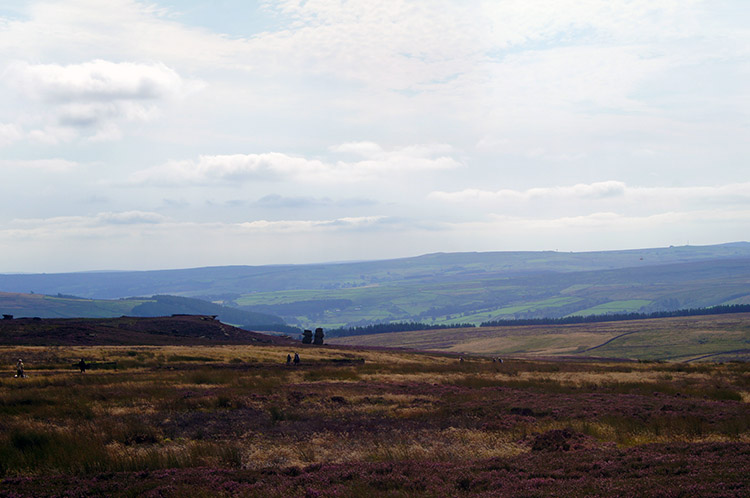 Looking across to Jenny Twigg and her Daughter Tib 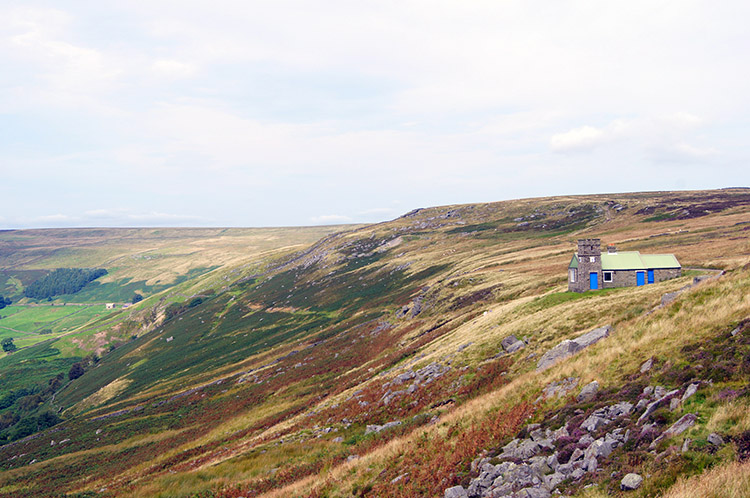 Instead of going up close I had to content myself to looking over at Jenny and Tib from a distance. As I looked over I saw the shooting party heading back to their vehicles. Not all of them though, I had an hilarious moment with two ladies from the party hidden and crouched by the drystone wall near the track. I asked what they were doing "Skiving" one replied as both smiled. That's OK then" I replied as I walked on by. After passing the skivers I walked from Combs Fell and close to the trig point on Ouster Bank before crossing over the Lofthouse to Leighton road and heading on a slight uphill gradient to Thrope Edge. 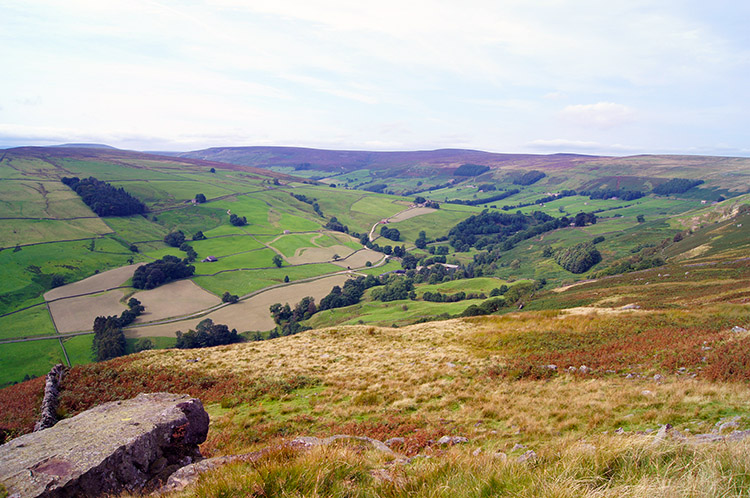 The view to Upper Nidderdale from Thrope Edge 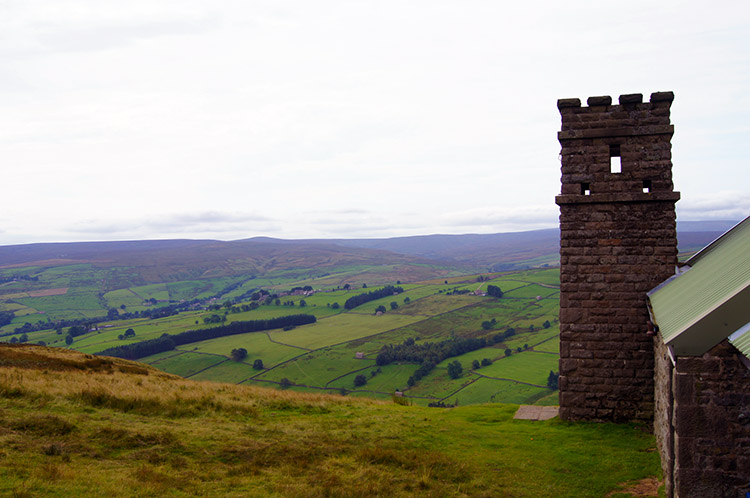 On reaching Thrope Edge I had one of those 'WOW' moments. As I walked from the track to the edge Upper Nidderdale unveiled in all its glory. I could see the sweep of the fledgling valley as it turned from west facing to north facing, a sweeping right angle centered around the area of the famous Manchester Pot and Goyden Pot, just two of a series of pot holes which attract many underground explorers. I will stay above terra firma thank you, too claustrophobic for me the tunnelling adventure. Anyway, you cannot see remarkable views such as the one in front of my eyes from underground. The view of Upper Nidderdale from Thrope Edge is magnificent. 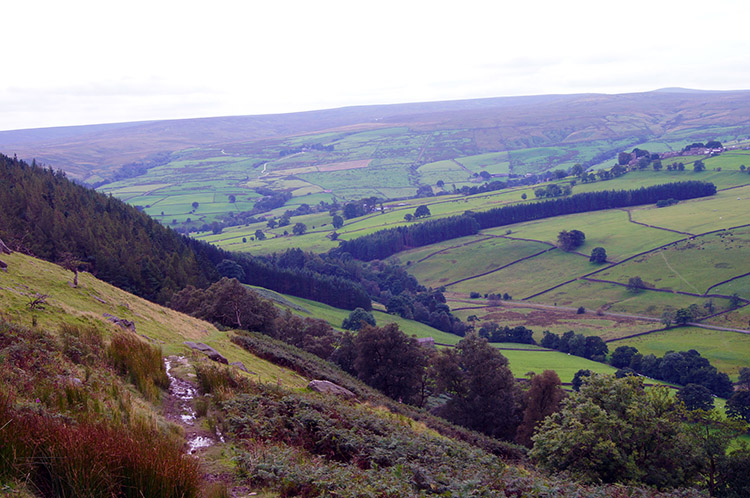 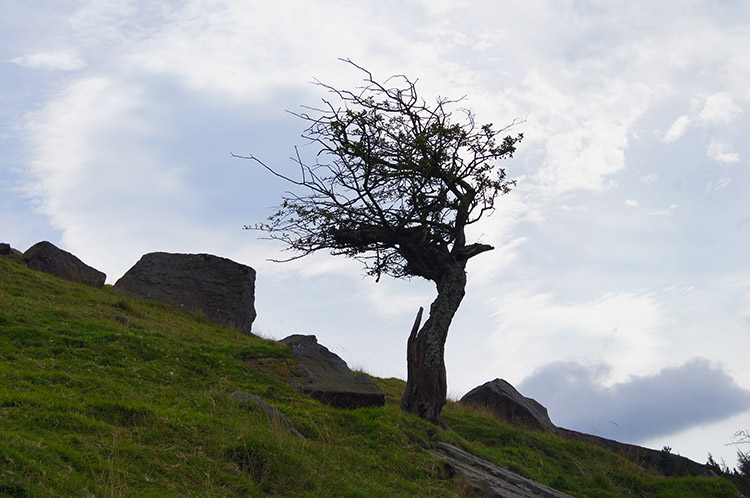 A Hawthorne shows the direction of the prevailing wind

I took lunch on Thrope Edge with the spectacular view my prize. After enjoying both feasts, one of food and drink and the other on my eyes I walked off Thrope Edge and began the descent back into Nidderdale. It began beside the ornate shooting hut sat on Thrope Edge, first as a steep winding course on a path through bracken and heather and then on an easier gradient near Thrope Plantation. 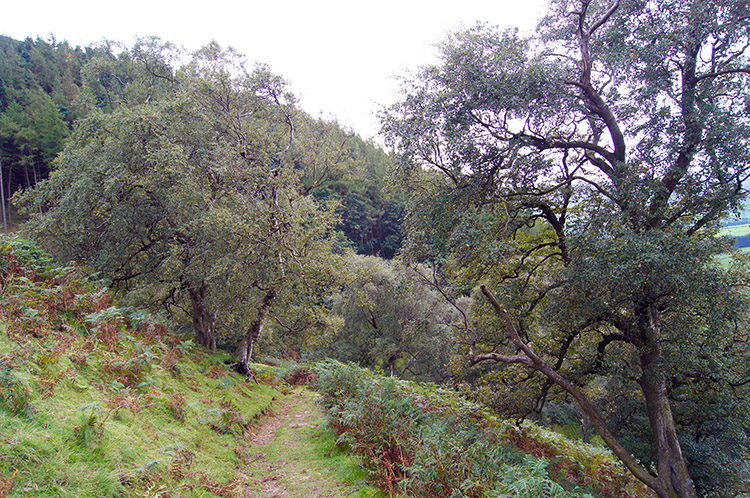 Back to the tree line near Thrope Plantation 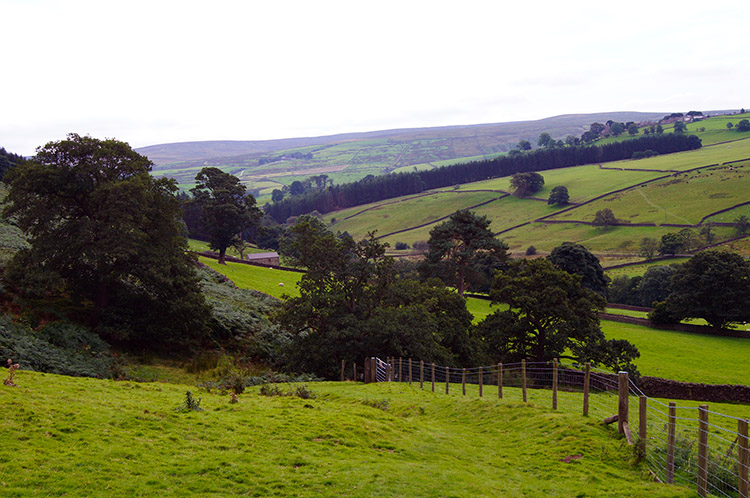 Off the edge and heading towards Thrope Lane

On my descent an event stopped me walking momentarily. It was the one of an airplane flying past me at low altitude. It was an old aircraft akin to a Hurricane. As is often the case it was gone before I got the chance to take a decent picture. (Note: I did get one from distance though and I identify the front and tail wing shape to be closest to a 1941 Mustang). After my airplane moment I descended further and as I got lower the grass got notably greener. I was descending from moor through scrub to high pasture and then to valley floor meadow near Thrope Farm which was the point at where I levelled off from descent to follow Thrope Lane. 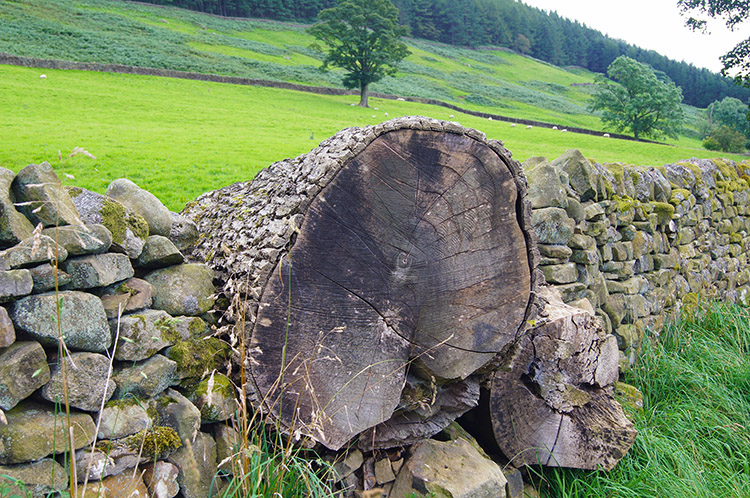 Old tree trunk makes an effective addition to the wall 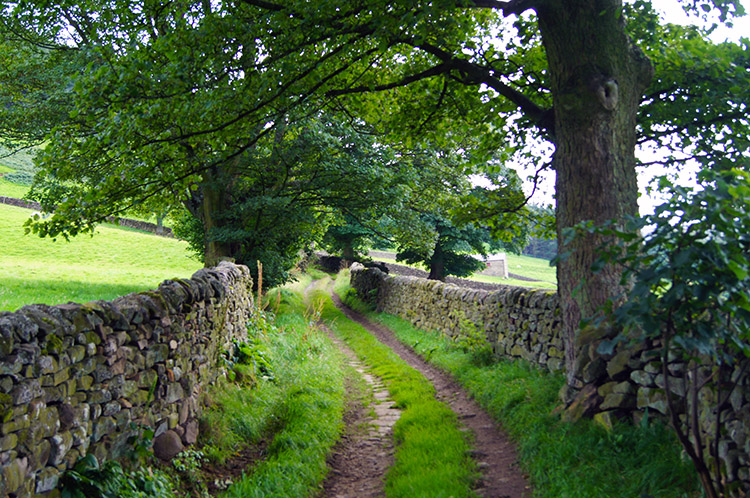 Walking along Thrope Lane was delightful. The first part of the walk was hemmed in by drystone walling, mostly well maintained and at one point a tree trunk was suitable natural reinforcement to the wall. Living trees also formed the wall in places where the wall was abutting them. The walled section of Thrope Lane gave way to open path after Thrope Plantation was cleared. As I continued walking I could hear the River Nidd making its way down the valley. I couldn't see it though, it being elusively shielded by wall and wood. 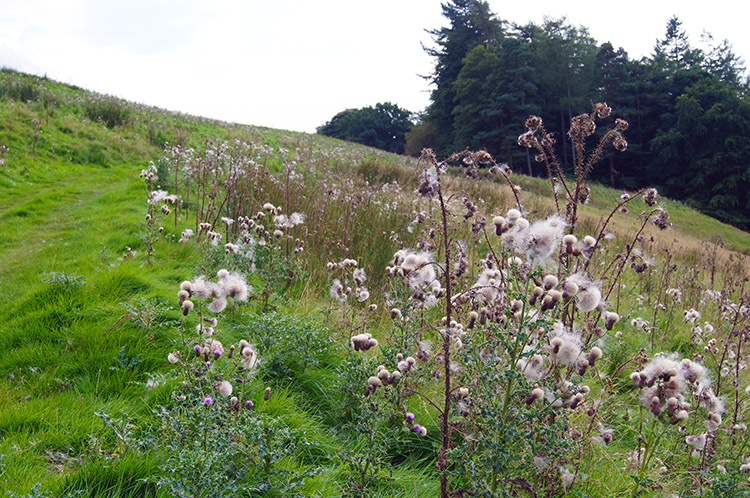 Thistle in seed near Ling Hall 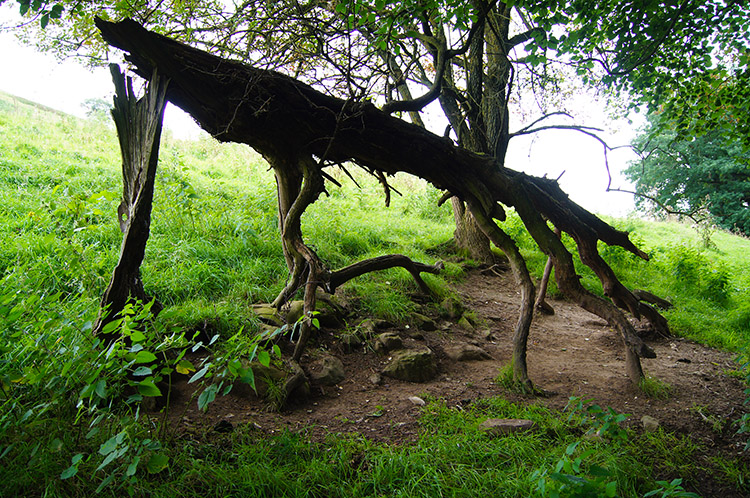 Into the final mile nature took precedent. A couple of fields were covered in thistle, all of it in seed with thistle fluff blowing in abundance. I also came across a number of interesting shapes and forms in devastation of wood. Some dead trees standing were covered in canker, burr and fungi while other fallen wood stood as natural sculptures, just as the one in the photograph above which my imagination likened to a stick insect stalking its prey. 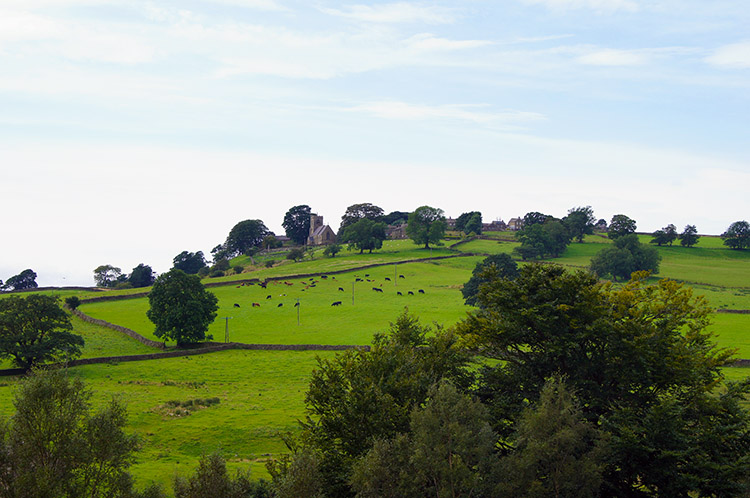 Looking over to Middlesmoor from near Lofthouse 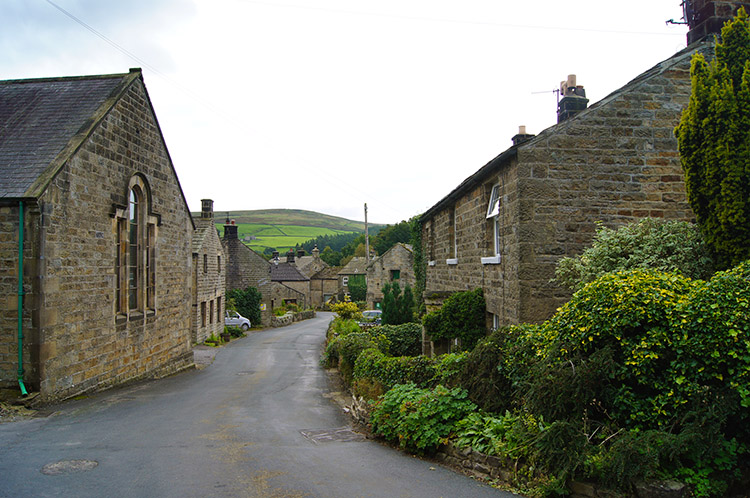 Walking the final yards through Lofthouse

While being occupied by the ever fascinating forms of nature I came to the end of my lovely walk abruptly. One moment I was walking in wild country and the next I walked past some farm vehicles and onto the tarmac road. I was back in Lofthouse, actually just above the village but a few paces took me along the road beside the highest buildings of the village. I walked down the roadside, past the village fountain, past the Crown Hotel and to where my car was parked. The walk was done, another brilliant one.