Summary: A walk for nearly all abilities though their are some stiles to get over and the initial climb could be a hurdle for some. The first potential reward for those who do the walk is that of seeing some breathtaking views of both Airedale and Wharfedale and of the surrounding hills. Should it be a clear day. The second reward, a certainty, is to visit a series of remarkable weathered gritstone outcrops. The Doubler Stones are very well known but look around and there are many more to be seen. The result of all this is that this short walk full of interest. 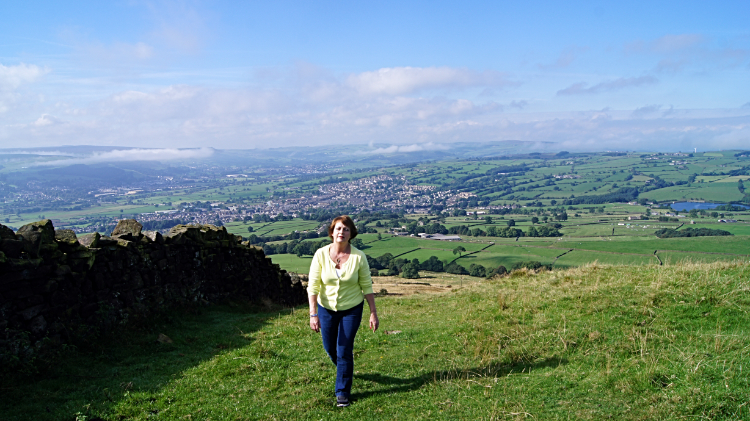 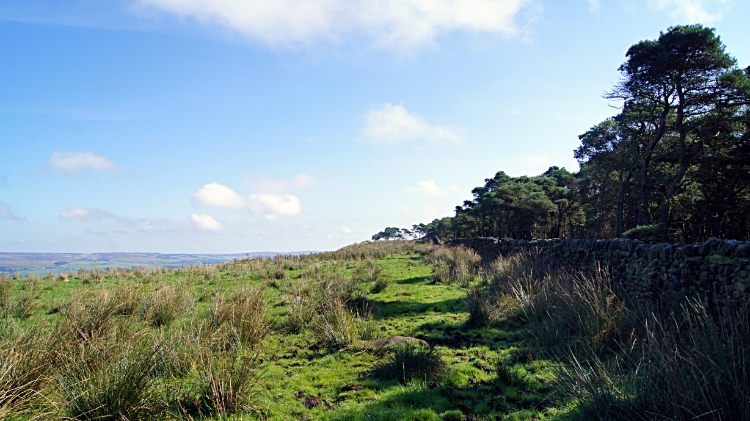 My wife Lil and I were out for a country drive on a Saturday. The main intention had been to visit Skipton for a bit of window shopping, followed by lunch. Having done that, and with the day such a glorious one, I suggested we drive up to the moors for a short stroll. We were not dressed for a hike after all. When Lil agreed I hastily got out the map for the boot of the car and on looking at nearby paths I came up with this inspiration. "How about I take you to the Doubler Stones. You will love them". She replied "As long as it is not too far. I know you and your distances. Two miles means four!" Humbly I added "Not this time sweetheart. I promise". Fifteen minutes later we had parked the car on Lightbank Lane where there are some generous lay-by/ pull in's to park, and climbing up from Nab End by a field side towards Windgate Nick. The first couple of hundred metres involves the hard steep climb, all of 60 metres ascent. The reward from the effort is the views were already becoming stunning, particularly the first one which required us to look back and west to Airedale with the village of Silsden the prominent in the picture frame. 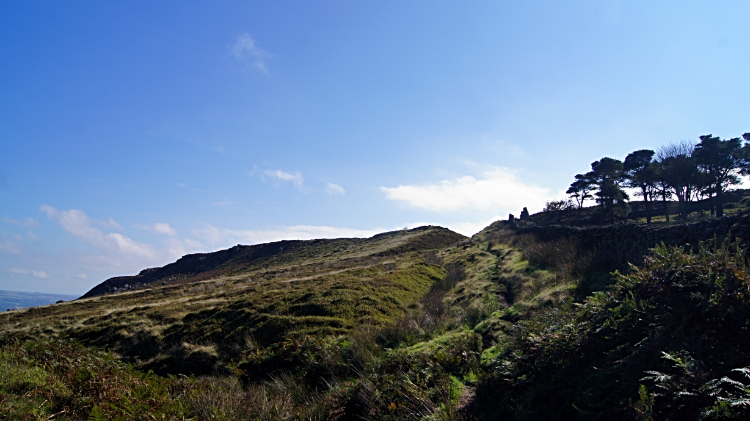 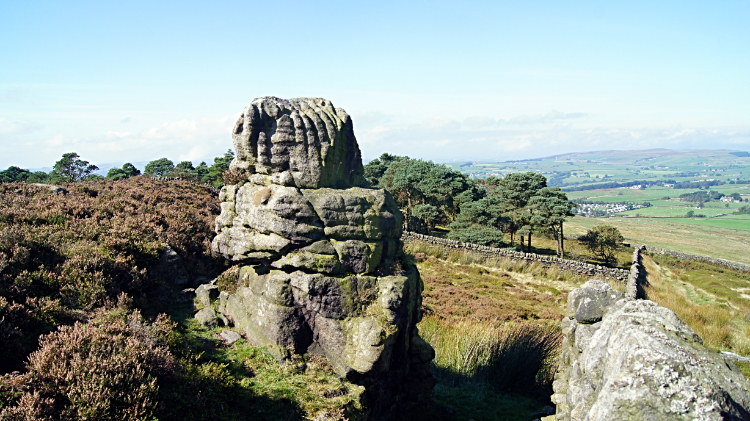 A thirty metre climb followed from Windgate Nick, up the side of White Crag Plantation to Black Hill. "No more climbing I hope" said Lil on reaching Black Hill top. "Not really, it is all easier now. Promise". I said. And I was being honest with her. After the first 90 metres of hauling ourselves up Nab End the way became easier and from here on the walk was undulating ups and downs of no particular stress. We could enjoy ourselves and we did just that. It was time to play. First we crossed over to an impressive stand of gritstone, one of the Millstone Lump's which mark this part of the moor. Next, and poignantly, we came to a memorial to two aircrew of 25 Squadron Royal Air Force who lost their lives in World War Two, their de Havilland DH.98 Mosquito NF Mk II crashing here. Respect to them. 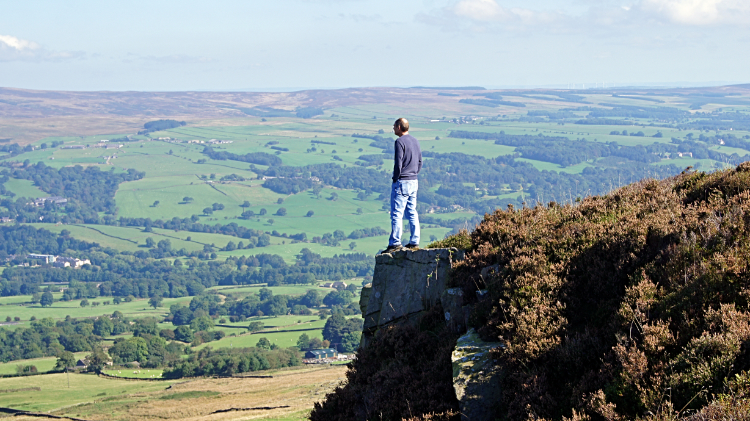 Looking across Wharfedale from Black Hill 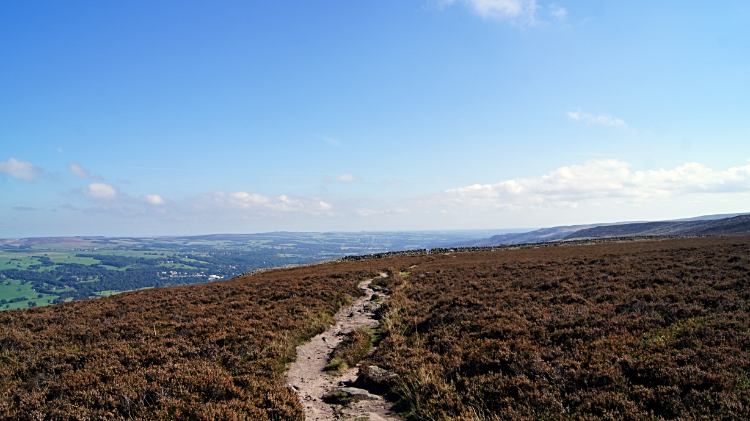 The path to Ilkley Moor

From the site of sadness Lil and I took time out to walk on the north edge of Addingham High Moor, looking across the village of Addingham in the heart of the Wharfe valley and over to the hills of Beamsley Moor and Middleton Moor. I recalled the many happy days that I have walked those uplands. "I am so lucky to live around here" I said to myself. We could have kept heading east along the edge of the moor on to Ilkley moor and filled the rest of our day up here but we were not dressed for it. Nor did we have any food or drink. So instead we turned our course to southbound, towards the Doubler Stones. 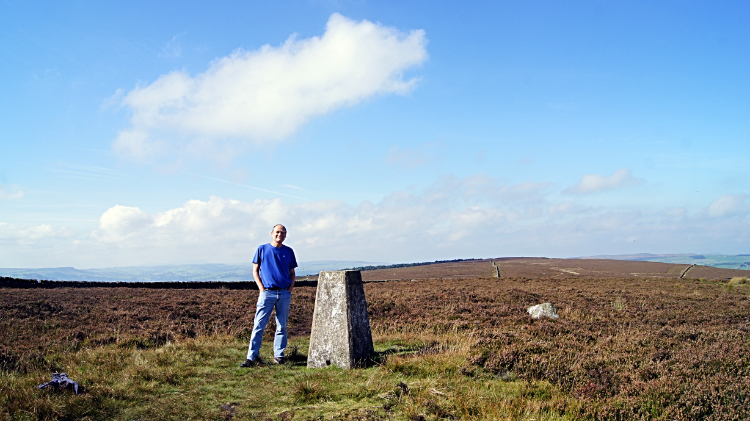 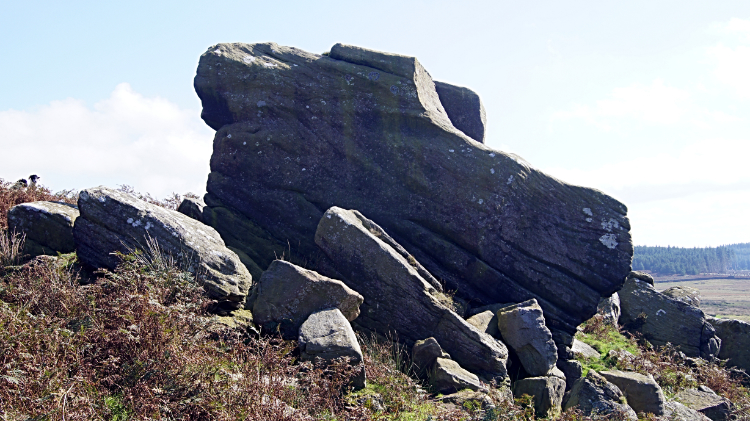 While making our way across the moor I spotted a trig pillar in the distance. It was a kilometre away to the south east and knowing me Lil knew I would be off haring to it. Which I did. Telling Lil to stick to the path, I went off, touched the trig, did a pose, as you do, and hurried back. (Note: My detour to the trig is not part of the download files, being off the permissive route - though it is within right to roam boundaries). When reconnected with my wife we came to the area of outcrops and erratics in the region of the Doubler Stones. Before them though we came to a jumble of rocks where the largest one looked uncannily like the face of a hound dog. We christened it the 'Dog Stone'. 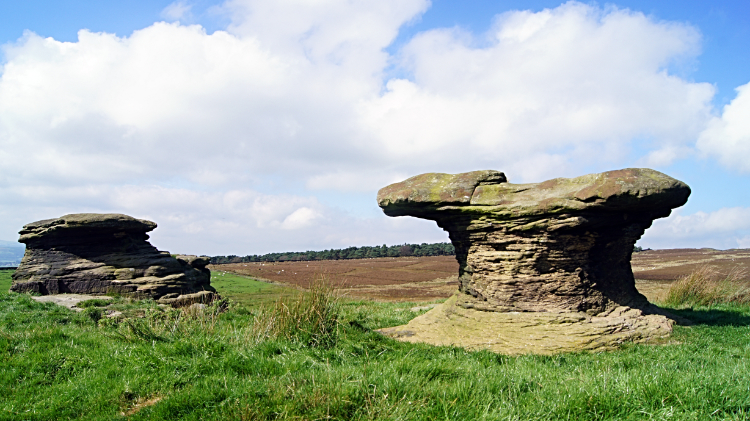 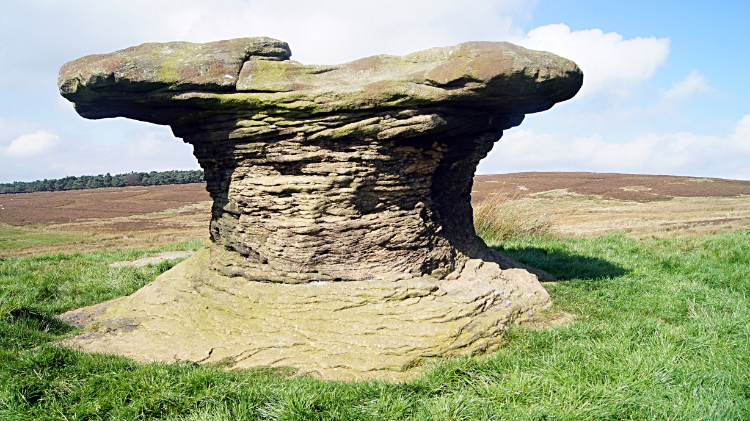 Then we arrived at the site of the Doubler Stones. I had first visited this pair of remarkable weathered gritstone pillars during my Ilkley Moor walk of 2003, when I was instantly smitten with them. I was glad I had finally got around to bring Lil to see them. She was pleased too. The Doubler Stones were first described as the ‘Doublestones’ in the local Addingham parish records of 1786 and almost a century later Archaeologist J Romilly Allen said "I presume that they are called Doubler Stones from the fact of their shapes being almost identical" Time since has weathered them further and they are no longer identical. One which I call the Anvil Doubler Stone has retained the original mushroom shape but the second has seen its top partially collapse and weather away. Which is a shame. For more information on the stones the Northern Antiquarian is a brilliant resource. 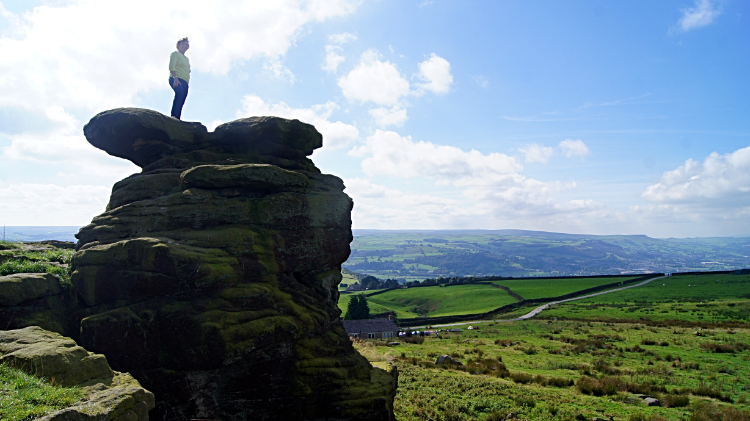 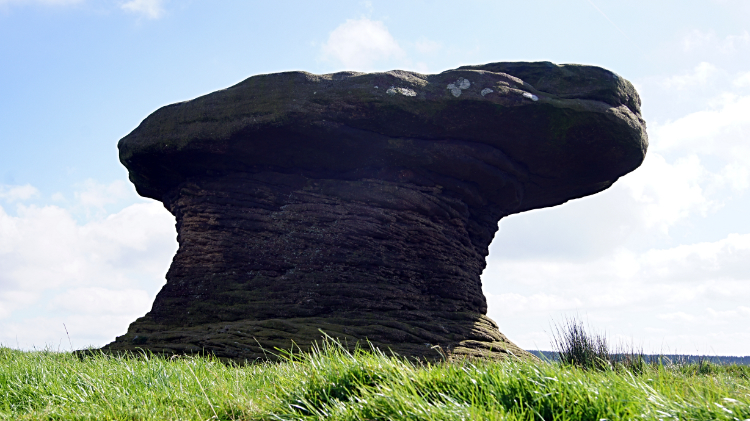 Look around a little, particularly to the moor edge, south of the Doubler Stones, and you will find more remarkable rock outcrops and weathered stones. We did not have to look far to find the big outcrop Lil is stood on top of, a great vantage point overlooking Brunthwaite Lane, Silsden and the Aire Gap between Skipton and Keighley. We also found another mushroom stone which could be another Doubler Stone. Outcast from the original site. There were more besides these examples. It is a place to explore. To find new things every time you turn your attention from one direction to another. On our reluctant leaving of the area I said to Lil "I want to come here again. I bet I will find something new when I do". It is that kind of place, one for meandering in and exploring. 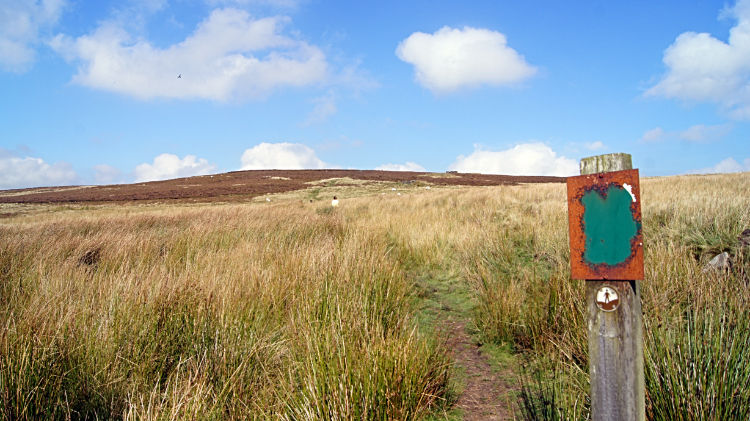 The way back to Black Hill 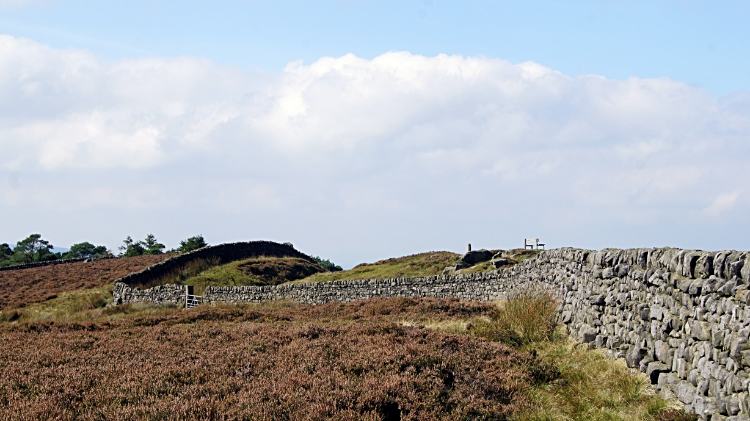 It was time to go. We had not given ourselves much time from the start anyway and commitments for later in the day hastened our departure from this remarkable place. As we strolled back across Addingham High Moor to Black Hill both Lil and I agreed it had been the most marvellous diversion to our day. Sometimes a walk unplanned is a walk of the very best memories. And this had plenty. Addingham High Moor is a place of wonder. A place to be enjoyed and explored thoroughly. There is magic hidden all around it. A special place.