Summary: Starting from the interesting village of Great Haywood this walk passes the National Trust's Shugborough Hall along the Staffordshire Way which takes us into Cannock Chase Country Park, since 1958 designated an Area of Natural Beauty (AONB). Explore quiet and popular paths on the Chase before returning along a section of the Trent and Mersey canal towpath which is also part of the Way for the Millennium walk. 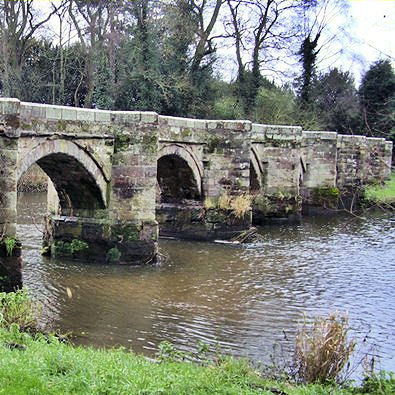 Essex Bridge over the River Trent near Shugborough 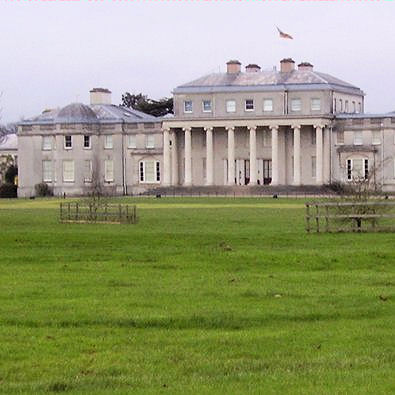 Great Haywood, a small village in Staffordshire, may be unknown to you, unless that is you have an interest in canals. Until the arrival of the railways the best way to transport heavy goods was by water. The big plan back in the mid 18th century was for an improved transport system adding to navigable rivers and coastal routes. James Brindley originally a millwright from Leek was commissioned to supervise the building of new canals to link the major navigable rivers. He proposed one from the Trent to the Mersey and another from the Severn at Stouport, the two canals meet here at Great Haywood.

Leaving the village between the white and unpainted brick otherwise symmetrical rows of cottages I wonder if this is an impressive approach to Shugborough or a view to remember leaving Great Haywood. Either way the grand design is soon marred by passing under the railway (1849), over the canal (1777) then over the ancient Essex Bridge (16th century). This was an early morning winter walk so it was useful to follow the metalled track passing Shugborough Hall as the light slowly improved. 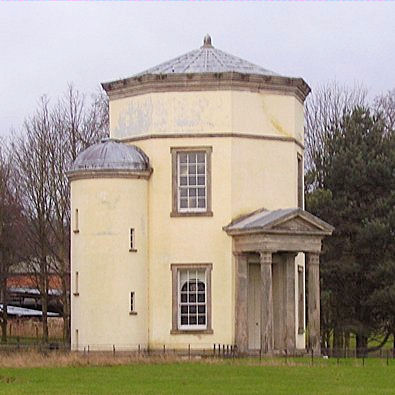 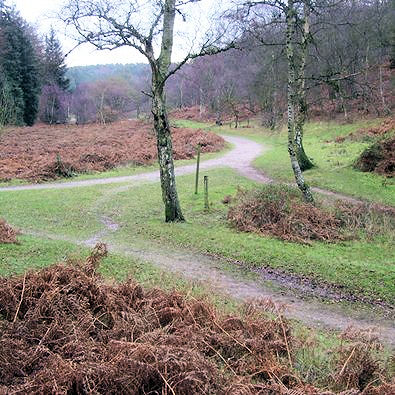 I thought I remembered in the past being able to walk more freely in the park but the signs are now clear so I keep to the fenced path. The farm buildings appear to have the same structured design and look attractive. Don't expect the guide to contact you on Twitter or know that you arrived in a carriage propelled by an internal combustion engine. (All will become clear when you do the walk!)

The Staffordshire Way stays on the road and perhaps I should have done the same so you can shorten this walk along 'The Way' if you wish, or follow me and perhaps get lost. A frequent problem I find in country park type locations is that they have little regard for the rights of way network. There are lots of paths but if you seek the paths on the map you could be struggling. I lost it fairly quickly and ended up in an area where felling was taking place, not actually while I was present I should add. This did have the advantage that on the brow of the hill the view north was good but the ground had been churned so was difficult to walk over. Never mind I just head for the line on the GPS and all's well in the end. 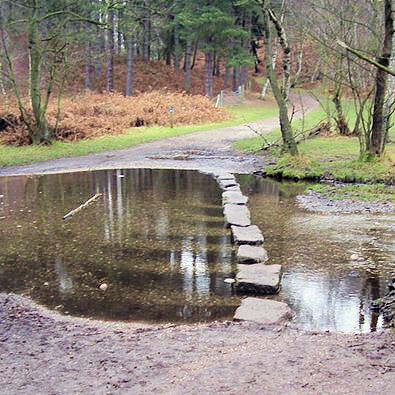 Stepping stones across the Sher Brook 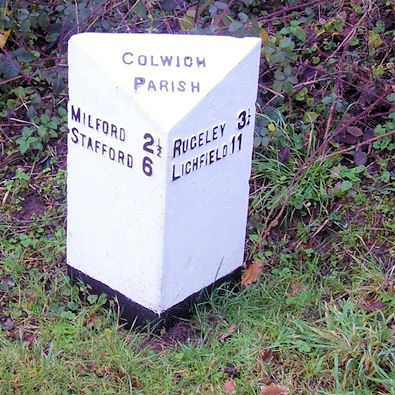 A short section of road verge and then a good climb up the valley to Spring Hill. A taste of things to come - a glorious bit of heathland. The ground is sand and shingle which drains water away very quickly making the soil dry and infertile, habitat suited only to the hardiest of our native flora, and not at all suited for agriculture. An area favoured in the past for Royal hunting but now available for townies to exercise dogs, children and themselves.

I soon found the main paths with sign posts and signs of good usage. We rejoin The Staffordshire Way for a short while taking the path to the Stepping Stones. Hardly in the league of Dove Dale or Bolton Abbey but an obvious honeypot if the weather is fine and sunny.

The wide path continues as an easy walk to eventually arrive at a car park where we must use a minor road into Little Haywood. I was a bit disappointed and surprised that the access road to the car park had been built along the line of a bridleway forcing all users onto the narrow hedged drive. It would be far better to keep cars and vulnerable users segregated. 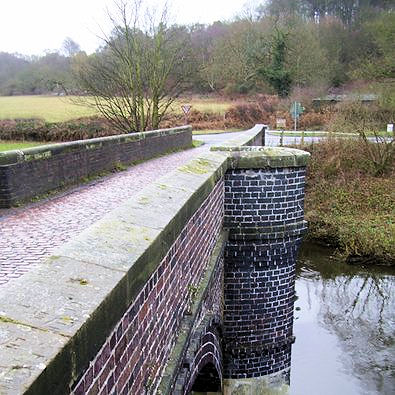 Weetman's Bridge over the Trent near Little Haywood 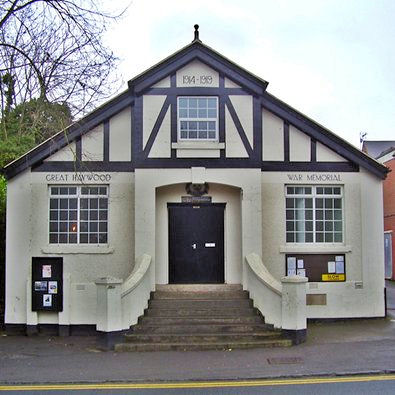 Weetman's bridge over the Trent is interesting with it's cobbled surface and austere blue brick construction. I went to explore a little of Little Haywood and then walked back along the road ever hopeful that a gate would provide access into the strip of National Trust land that almost connects the two villages. There is no access at this end so I recommend a return along the canal towing path. Back in Great Haywood, before you drive home, take a look around. I found it an intriguing village almost two villages in one. There are two churches and two associated primary schools, a War Memorial Hall, Sports and Social Club (originally the Working Men's Reading Room and library) and behind the impressive Clifford Arms a collection of interesting businesses.