Summary: Stiperstones is different to other local hills, out of place if you like. It is of unique character being the only hill with sedimentary quartzite in England. The rock is laid out in a line across the ridge of Stiperstones and it invites many an intrepid walker to clamber over the outcrops. This walk includes a walk along the full length of the ridge as well as a walk out to Green Hill which provides superb views of the west Shropshire lowlands and Welsh borderlands.

The Walk: I had two walks in my thoughts as 'must do' during a short walking break with Dave, Jez and Steve in the Shropshire Hills. One had been the Long Mynd which we managed to complete on the penultimate day of the break. This was the other and thankfully we had another decent day to enjoy walking this amazing hill called Stiperstones, a hill with a series of rock outcrops of a type not found anywhere nearer than Scotland. I could not wait to get going but wait I had to for a little while longer as we first looked out for and found Nick Davenport, a local lad we had met some days earlier on Brown Clee who was joining us for the Stiperstones walk and then secondly as we took welcome refreshment at the Bog Field Centre on the west side of Stiperstones where we were wonderfully catered for by two lovely ladies. So after being reunited with Nick, refreshed by good Shropshire hospitality and furnished with a little understanding of local dialect we set off on our way. 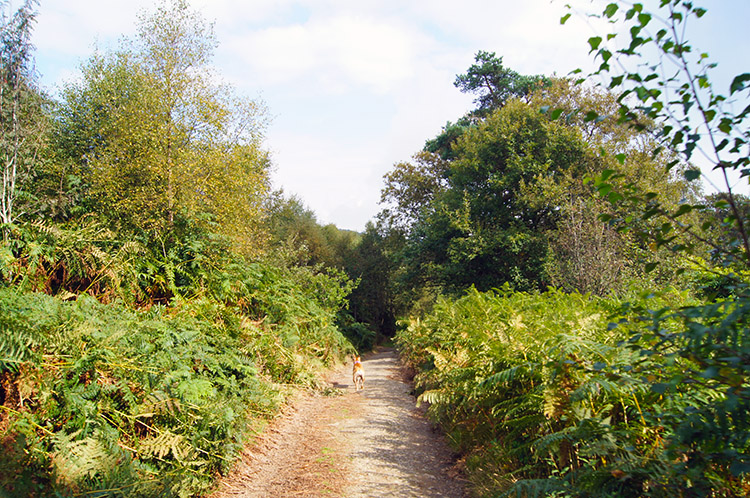 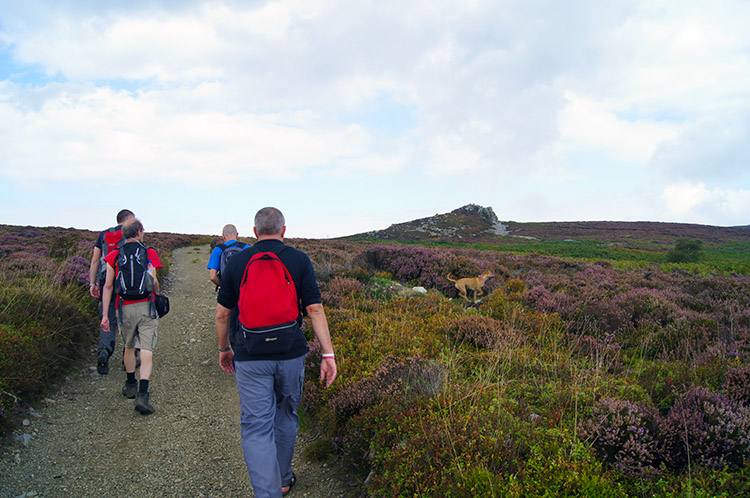 We set off from the car park on the Stiperstones which is beside the road linking Bridges on the east side of the hill and The Bog on the west side. It was an easy start with a very gentle ascent for the first mile of the walk on a good path which took us on a north east course through Gatten Plantation. We could not see the rock formations for which the Stiperstones is famous on this first outbound stage of walking, the moment of revelation having to wait a little while longer. After one mile we left the plantation behind and after a short descent to a track near The Hollies we started the climb to Stiperstones hill. The climb began with a walk up a field which led us to a gate which gave us access to the open fells. Late summer heather blossom was all around. Now I could see the first rock outcrop ahead of us. We walked directly toward it. 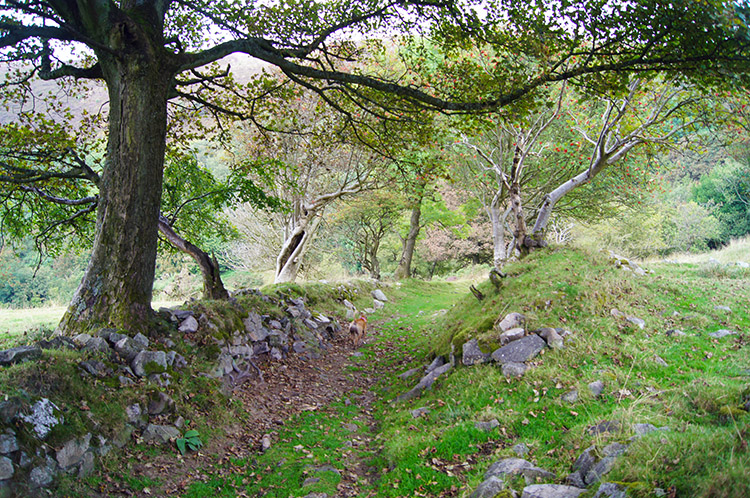 On the path towards Green Hill 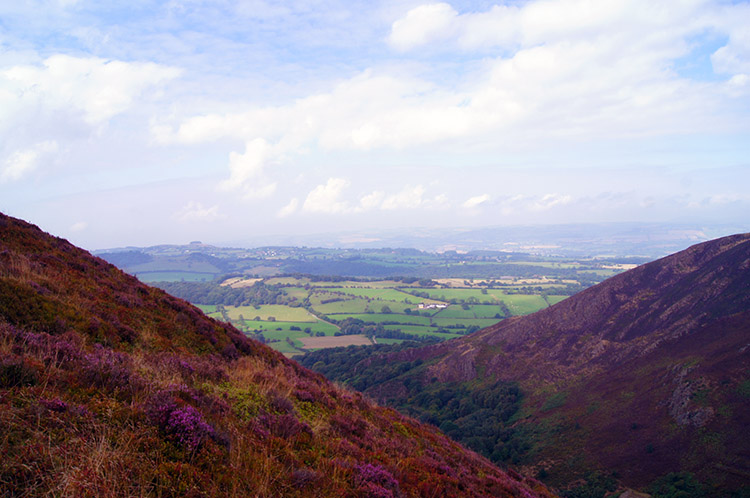 The outcrop we walked to was Shepherd's Rock but I will come back to that later. We walked straight past Shepherd's Rock and headed down towards the valley between Perkins Beach and Green Hill. This caused us to lose all the height we had just gained and the lads were not amused but I had planned this walk with thought and there was something I felt we all must see. After steeply descending 75 metres we rounded the valley head and climbed once more, this time just over half of what we had just lost but it took us to the place I had wanted to be. The viewpoint was tremendous, even causing Steve to say "Wow, now that is something to behold". We were stood on a patch of ground from where the vegetation was stripped bare, marked as a tip on the edge of Green Hill. The view Steve and the rest of us admired was of Oak Hill, Mytton Dingle, Stiperstones village and the flatlands of west Shropshire. It was so beguiling a view that I wanted more so while Dave, Jez and Steve continued on the path I pointed out for them to take Nick and I walked further onto Green Hill so we could see the whole spread of the Shropshire vale laid out before us. It was well worth the effort, such a wonderful tableau of fields and small villages spread out on a rich green tableland with small neat hills scattered around randomly.

It was the concentration of contours which had drawn me to Green Hill, Stiperstones is actually quite tabular laid out on the map but Perkins Beach, Green Hill and Oak Hill are a dark brown colour which gives away their character of steep bank sides. I just had to take a look and I am so glad I did. You must too should you do a walk to the Stiperstones. 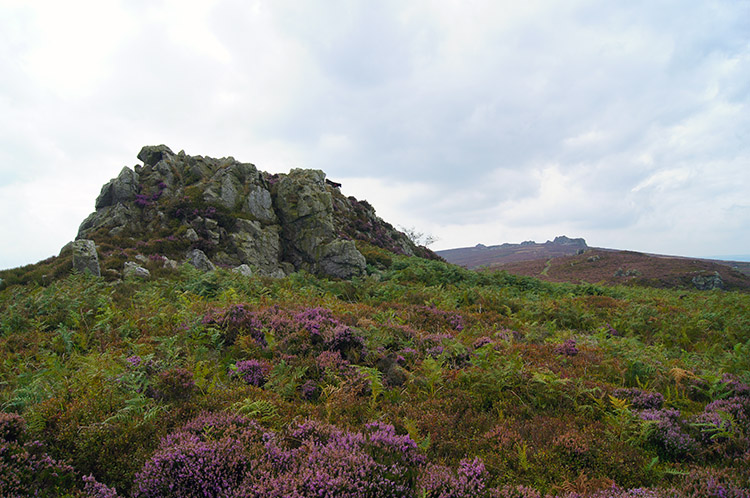 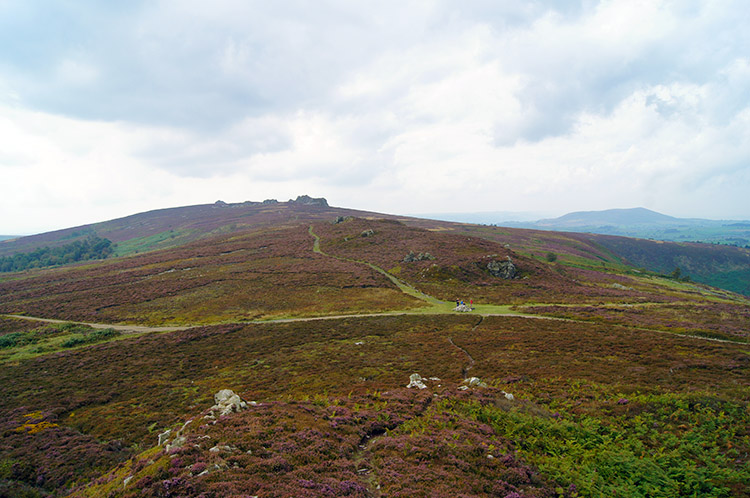 Looking along the ridge from Shepherd's Rock

After forcing ourselves away from the attractive view from Green Hill Nick and I retraced our steps off the hill and then followed the path looking over the full expanse of Mytton Dingle which took us to the north east end of the Stiperstones ridge. Now for my geology fix; when I had chosen Stiperstones as one of the Shropshire break walks I had read the hill was the place of something unique in the area. The rocks on show were different to my normal walking terrain. As Nick headed past Shepherd's Rock for the second time to to rejoin the lads by the crossroad of paths we had crossed earlier I climbed the outcrop. I noted the rocks were a grey white, more like the limestone of Yorkshire Dales than grit stone of the Dark Peak. But the rocks were of neither characteristic. I was stood on Quartzite rock, England's only exposed quartzite and Great Britain's youngest quartzite. How about that eh. After a fun clamber on Shepherd's Rock I climbed down and resumed the walk. "Come on" Jez said, as the lads were wanting to get a move on. 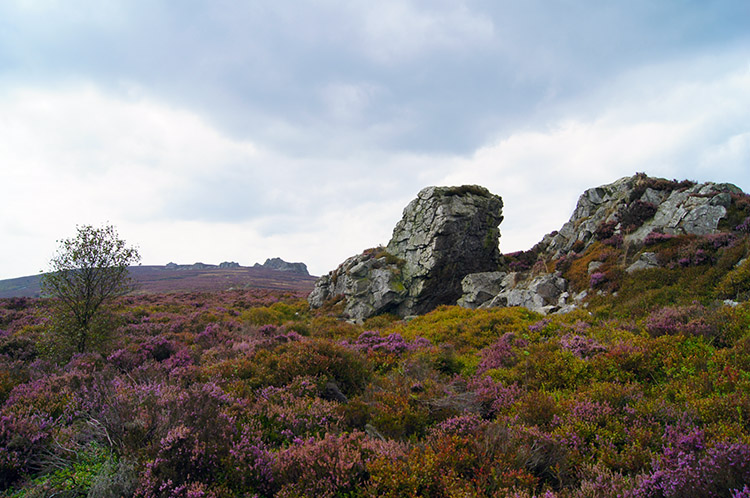 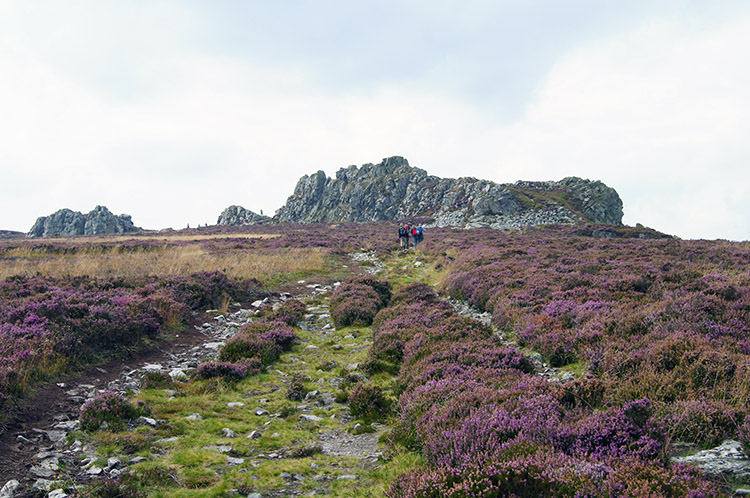 I was always behind my walking colleagues on Stiperstones. While the walked on the rock strewn path and sometimes through heather patches which form the ridge path I kept stopping off at the outcrops to take a closer look at the 480 million year old rocks formed during the Ordovician period. I am aware severe frost during the last ice age resulted in the shattered, boulder-strewn landscape I was looking at and that the jagged tors, including the Devil’s Chair which I was now walking straight towards and which rises some 20 metres high, are outcrops which proved more resistant to erosion. I am just so grateful they have resisted enough for me to enjoy them. 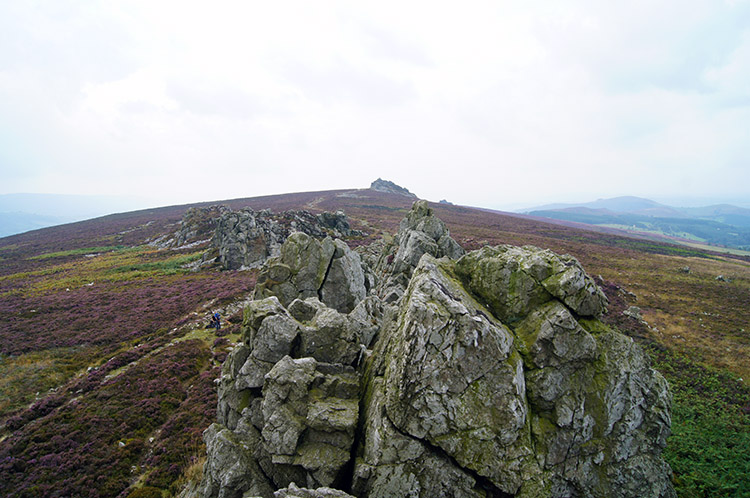 The view from on top of Devil's Chair 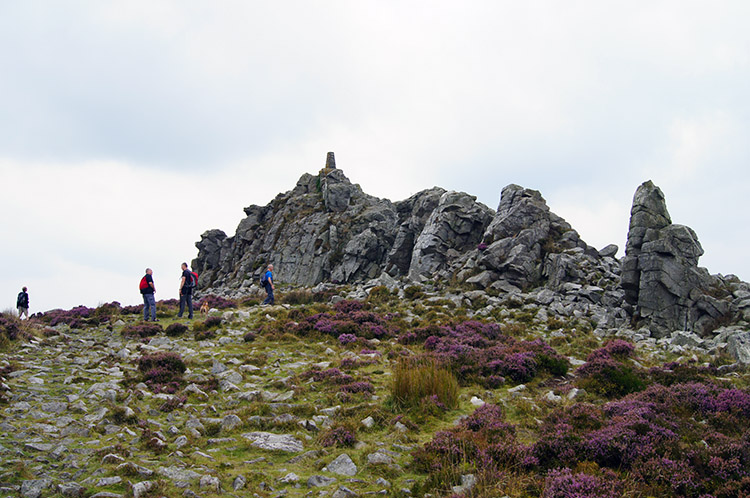 I climbed the Devil's Chair, I just had to and then I walked across the full length from north to south. I took extreme care while doing so, the quartzite is hard and with sharp edges. Even the slightest slip would have given me quite a spanking. My, it was fun though and I like exposed ridges. Let's call Devil's Chair my mini Striding Edge of the day. After my ridge walk I dropped back down to the path and followed the lads to Manstone Rock. This outcrop, similar in size is the highest point of Stiperstones at 536 metres. A trig pillar stands on top of the outcrop marking the height. 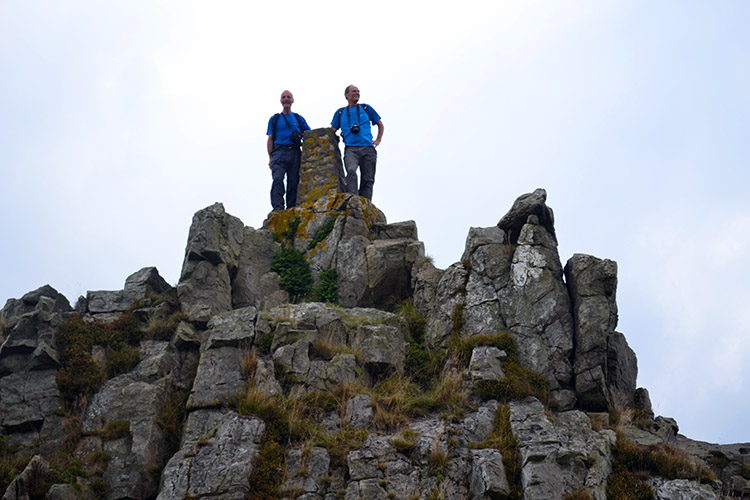 Steve and me on Manstone Rock 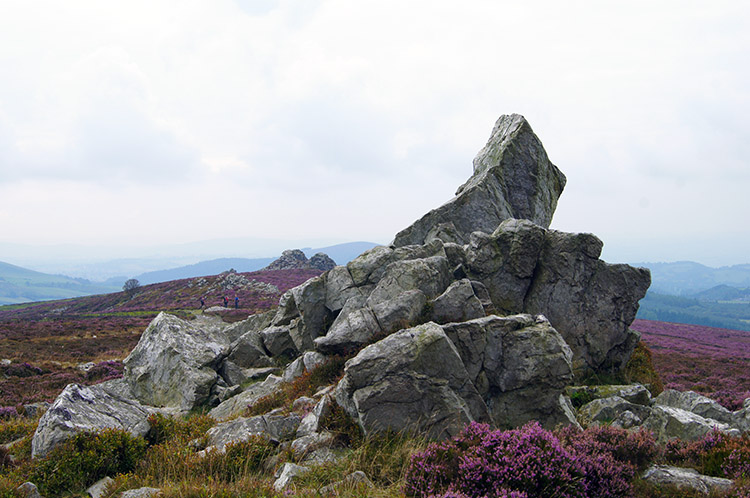 To reach the highest point of Stiperstones you have to climb Manstone Rock. Of course I did but not until Steve had done the same. I joined him at the top for a look around. While up there we both noticed a group of people, about a half dozen walking across the west side of the hill from north to south. Stood at regular intervals and linked by ropes they walked at the same pace through deep heather. I just had to find out what they were up to so after clambering down from the trig point I walked over the moor to the one nearest me. "We are counting Grouse on the hill" he said. After taking in the information and as I walked back I was startled. "Two more for the count" I shouted over to the chap for two Grouse had bolted from cover right in front of me. He raised his hand and put a thumb up acknowledging the information. I then found my way back to the ridge path at Cranberry Rock. On reaching my mates I told them what the group had been doing. Apparently they had debated the possible reasons themselves and Steve's assumption was the right one. 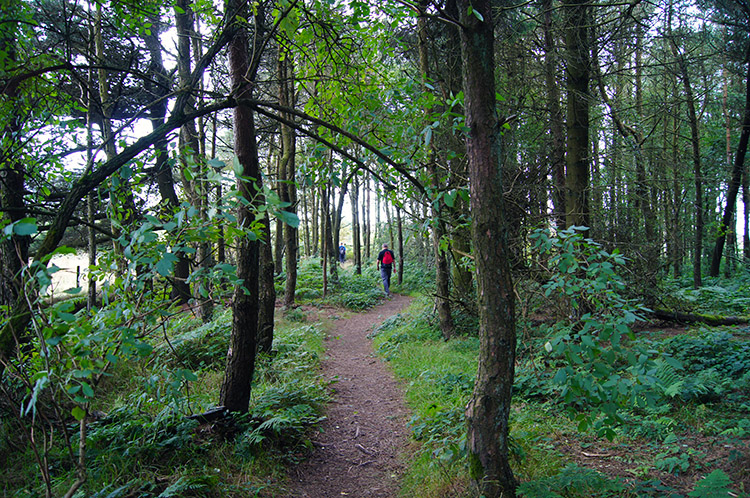 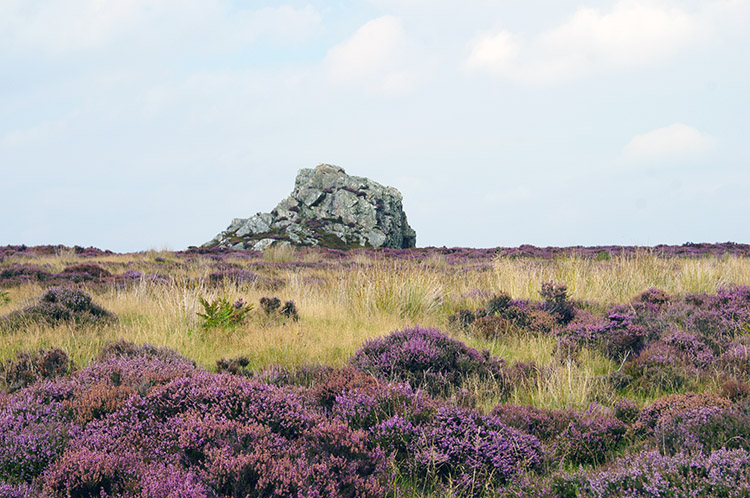 From Cranberry Rock we descended from the Stiperstones to the Bridges to The Bog road once more, at a point west of where the car was parked. In the last field before the road we stopped for lunch. It was a lovely spot, the view west down to The Bog and across the plains to shapely Corndon Hill being most attractive. After lunch Nick bade his goodbye. His walk was done and he had to get back home while we had more walking to do. So he headed along the road back to the car park while we headed straight across the road and south across a field towards Nipstone Rock Local Nature Reserve. First we walked through a small plantation linked the field to the nature reserve. 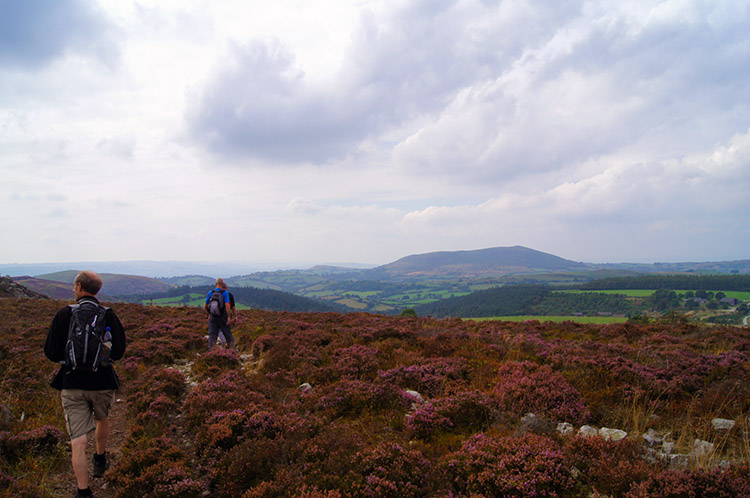 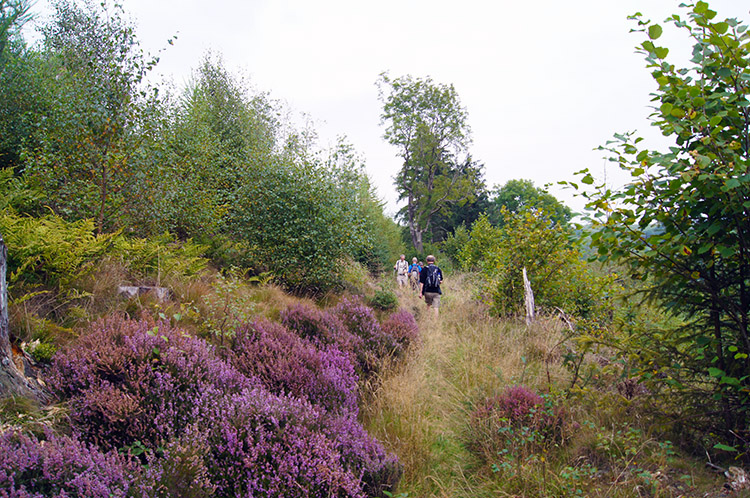 On the track towards Knolls Cottage

The rock outcrops were becoming more staggered now. Nipstone Rock stood alone in a field of heather. The next outcrop was a further half mile away, this one simply called The Rock. The walk between the two saw us continue to descend from the heights of Stiperstones. At The Rock our long ridge walk came to an end, here we turned at right angles from walking south west to south east. We were dropping from height more steeply now too and made the small mistake of going a little too far down by missing the turn off onto a path running north east and parallel to the Stiperstones ridge which led towards Knolls Cottage. Fortunately I looked at the map before we had dropped too far down; it would have been a killer to climb back up steeply for nothing. The path we were now following was not tended well, vegetation was overgrown and the leader of our line had often to beat down the overgrowth for us to continue. Tempers became a little frayed. 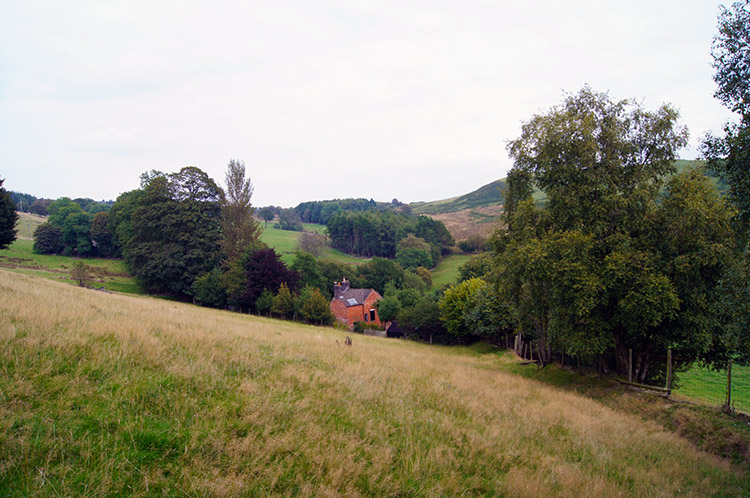 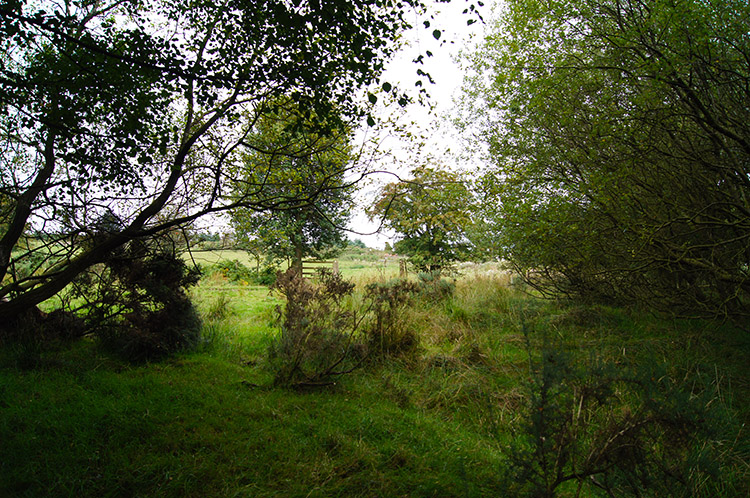 A parting of the ways came about. After struggling with the overgrowth for about a half mile, though it was not all bad, the lads headed up a path at grid reference SO 36025 96822 while I stuck to the original route I had drawn which kept me on the path towards Knolls Cottage. Alone now, I carried on and the path widened immediately into a bridleway. After a short while I reached a stile which led me into a field and down to Knoll's Cottage. At the cottage I reached a road which I turned right onto and soon after the road crossed a stream I left it to follow a path across fields, through copses and across more streams to reach Knoll's Farm. The place was a little untidy and the signs there missing - make a effort please. Not finding the signs and with chained dog barking I walked up the farm lane to the road and after a short walk up the road I reached the car park. The boys were waiting for me.

In conclusion I rate the walk very highly, the walk from Shepherd's Rock to Green Hill and the stunning views quite an eye opener. And then the walk across the Stiperstones which resembles the serrated back of a spiny dinosaur is a rock enthusiasts delight. I was in my element, utterly spellbound by the formations of the individual outcrops. Admittedly the walk after the descent from The Rock was an anticlimax but it makes the walk a decent circular. If I were to do the walk again then perhaps I would go the other way around and leave the best for last. It's a thought.