Summary: Walk on tracks and over fields on to the Cleveland Hills and then through woodland and across fields to Faceby and Whorlton, home to remains of a Motte and Bailey Castle. 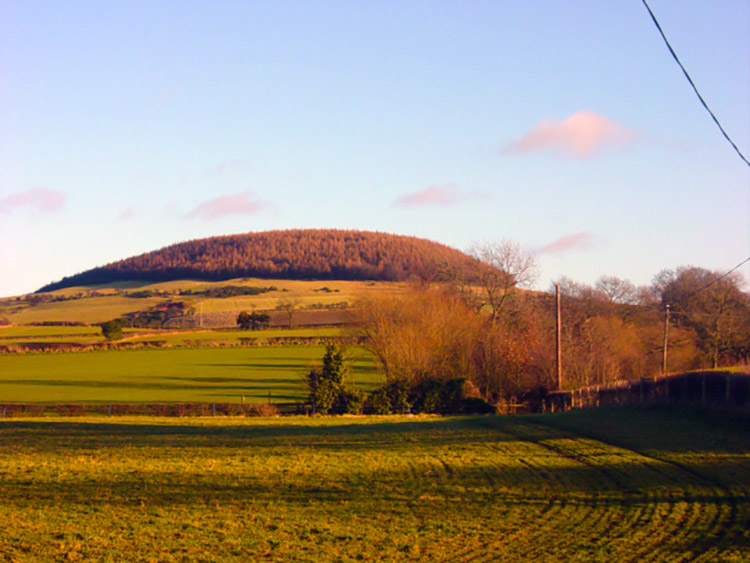 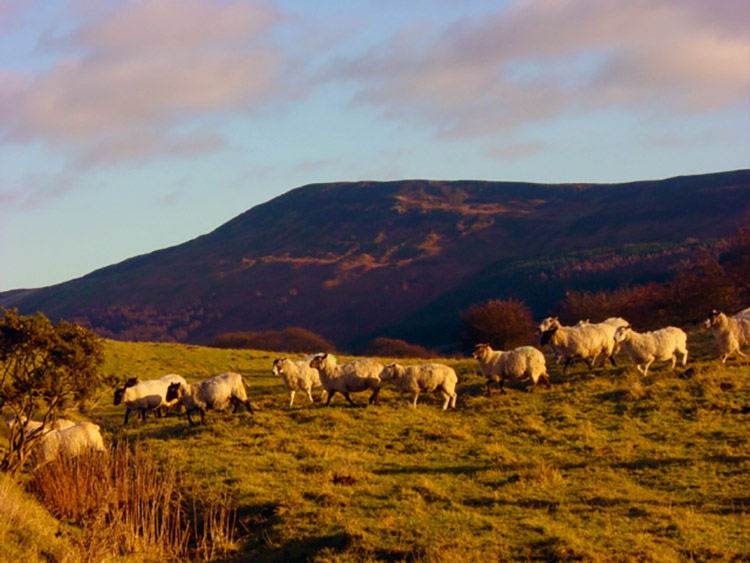 The Christmas break always offers the opportunity for a walk with family and friends and when the chance came about at Xmas 2004 I was particularly pleased. Usually I walk with my brother Dave, my best friend Steve and pals from Leeds or Knaresborough. This time I would be walking with my brother Ray, my sister in law Karen, my Godson Sean, an old friend Pete (also a super comedian!..it always spices up a walk), Karen's sister Andrea and last but not least my wife Lil who joined the winter walk troupe with trepidation! Ray, Pete and Karen took up walking about a year ago and now go regularly, enjoying it more and more as they go on. Sean, at 17 has also taken to it with enthusiasm. How I wish I had at his age. Now we had the walking group assembled we set out from Brompton near Northallerton to drive to Swainby on the edge of the Cleveland Hills. It was a beautiful sunny winters day. 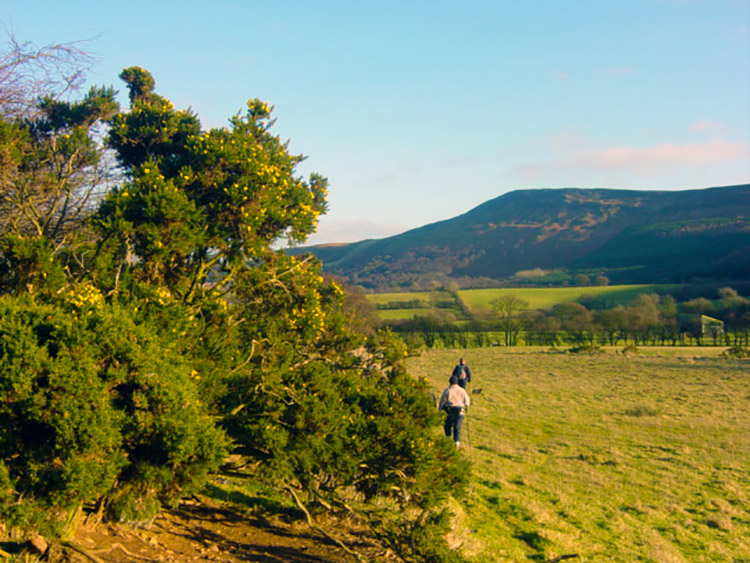 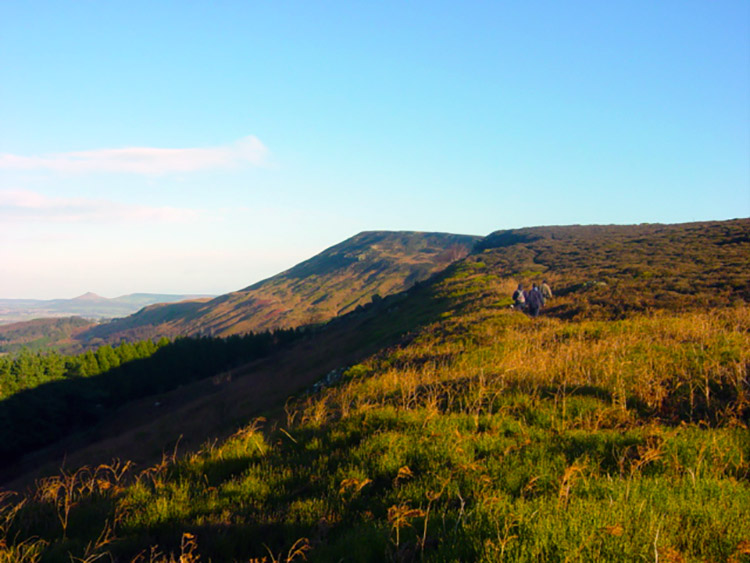 Ray had planned the walk which was a pleasure for me in itself for I nearly always have to plan the route. I looked forward to being led instead of leading. I could relax and enjoy the company of friends I do not often see while also enjoying what I like doing best. Ray's plan was to walk from Swainby on a circumnavigation of the distinctly domed shaped Whorl Hill (which we did not know the name of at the time..I have looked it up since) along tracks and over fields before ascending onto the Cleveland Hills (a climb Lil couldn't wait for!!) and then down again to Faceby before the finale of exploring the lost village of Whorlton (more on that later) And so, after kitting up on arrival at Swainby the 'Magnificent Seven' set off on the walk by walking south through the village before bearing off south east first along a road and then over our first stile into our first field past Mill Farm. Oh, I forgot to mention. Apart from the seven walkers there was also Tag and Russ with us. You can see them in some of the pictures. Tag found a gap in the fence to get through. Russ being larger was confused because no gap was large enough for him and ran up and down along the fence frantically trying to find a way in. Eventually Sean led him to a gate and through it he came. Poor Russ often got stuck and had to be lifted over by Pete...how many times was it you helped him over during the course of the walk Pete? I lost count. Despite the interruptions to his freedom Russ never seemed at all bothered. 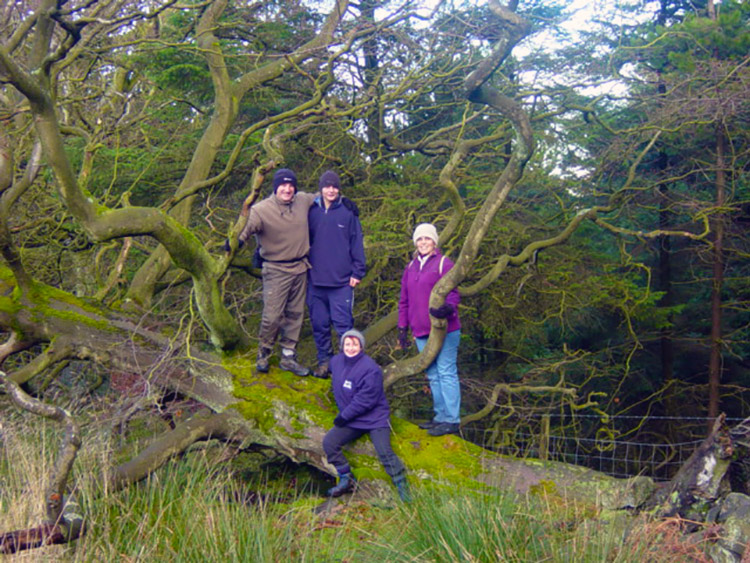 We celebrate this fallen tree below Great Bonny Cliff 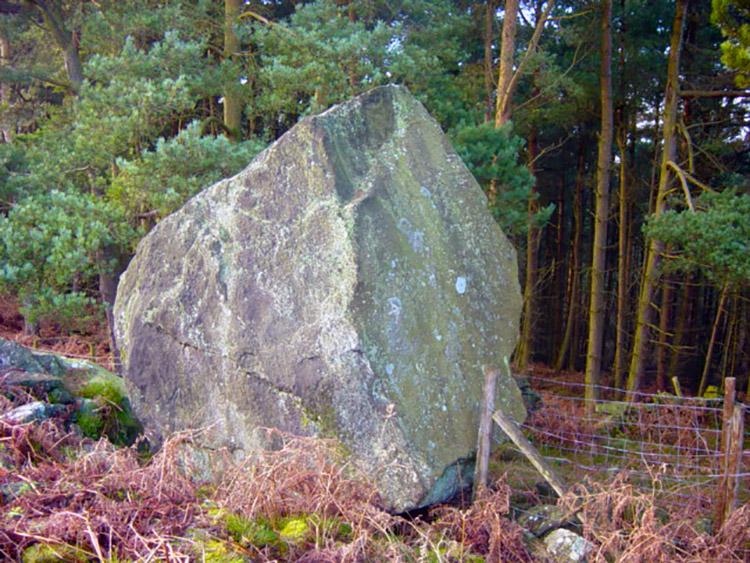 Where did you come from?

Ray led the way over stiles, along tracks and through fields with impressive professionalism. Soon we came to a stream crossing between Mill Farm and Whorlton House. What fun it was to see the different techniques employed by the 'Magnificent Six' in making the crossing. Despite the good weather it was wet underfoot and the vain attempts to keep footwear clean was humorous all day long. This first barrier was no problem to the merry band though. Well done everyone. Soon after Whorlton House we crossed over open fields towards High Farm. It was around here that Ray's first navigational problem came but while we paused for Ray to make his bearings nobody worried. Pete took out his binoculars and surveyed the land. I played with my new GPS (we could not get lost now for I was waymarking the route as we went along). The girls chatted as girls do. I forget what Sean was doing. Despite Sheep being in the fields Russ and Tag behaved impeccably. Ray confirmed his route and we walked past some gorse which was already starting to bloom in its vivid yellow flowers. The gorse thicket was confirmation he was right. We made our way towards a pond. Near the pond we crossed over our umpteenth stile and followed a narrow track which was wet through. It was certain boots would be muddy and some feet wet by now. Eventually we left the muddy track and followed a good track past High Farm towards the Cleveland Hills. As we did so we passed a lady leading a horse who wished us a good days walking. We were certainly enjoying it and for the girls the best part of the walk was dead ahead. We were fast approaching the steep climb up to the heights of the Cleveland Hills. 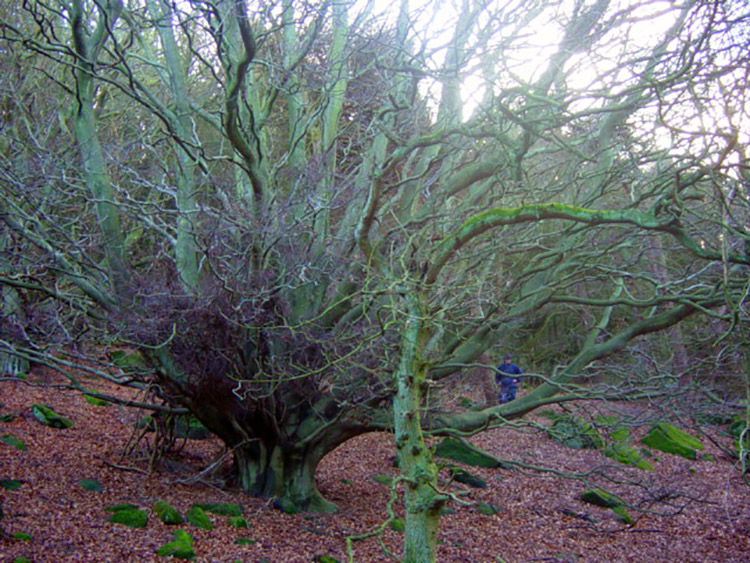 This tree fans out resplendently in Bonny Wood 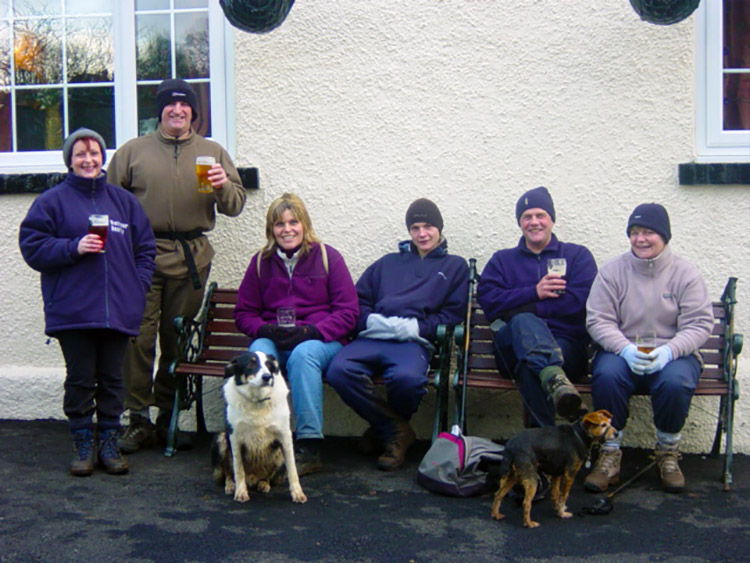 Enjoying a well earned drink at the Sutton Arms

All the way along the track the boys prepared for the climb and the girls steeled themselves for it. It was straight ahead and grew larger as we neared. It was not the greatest climb in truth but as the elevation profile shows it was 150 metres before levelling off followed by another 70 metres soon after. Lil hadn't done that at all for ages and neither had Andrea who now lives in Spain, being over here for Christmas with the family. The first part through woods was the steepest of all and Sean bounded up first with Russ in close companionship. The merits of youth and four legs! Pete, Ray and I followed closely behind and on reaching the top of the woods we waited for the girls who were valiantly hauling themselves up though the tree lined avenue. A few blooming hecks were exclaimed when they reached us but they were not complaining and a quick drink was greatly appreciated by all after the initial exertion. After the brief respite we headed on along the edge of the wood top before climbing onto open land at Live Moor. Here I took a solitary route though trampled fern while the rest of the troupe, boys first, girls behind, scaled onto the top of the moor and followed a path along the top to Great Bonny Cliff. This was a splendid section with breathtaking views of the Vale of Mowbray and the Middlesbrough coastline to the north and east. The distinct shape of Roseberry Topping and Captain Cooks Monument could also be clearly seen in the brilliantly clear winter air. It was a fantastic view to behold and certainly the most stunning part of this superb winters walk. All too soon we descended. 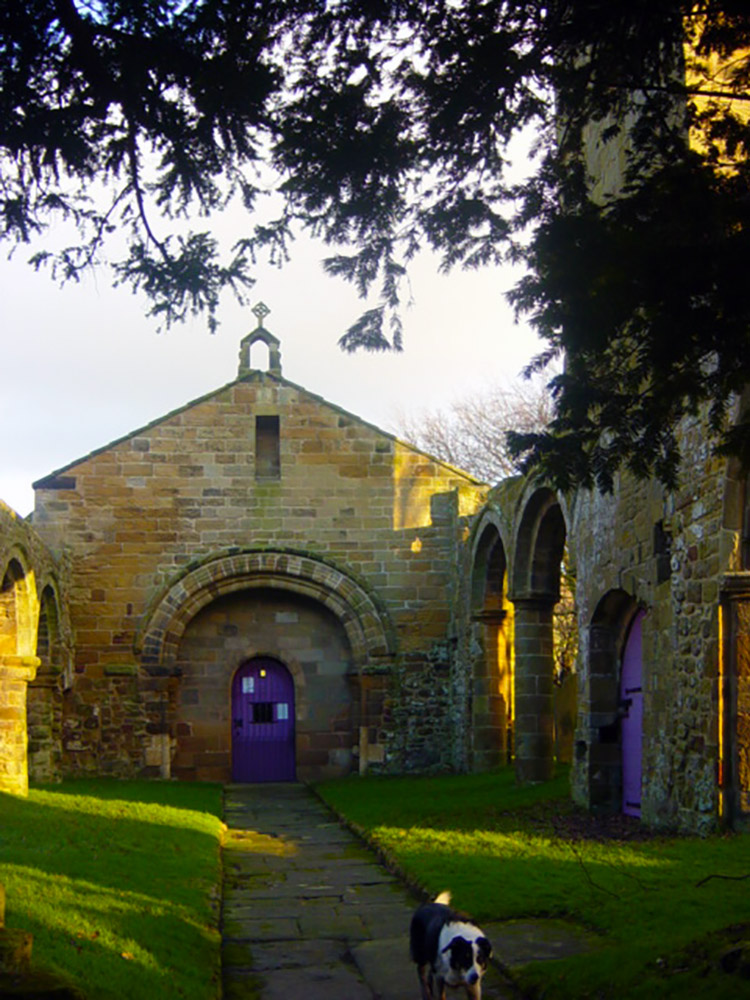 St Mary's Church in Whorlton was rebuilt in 1853 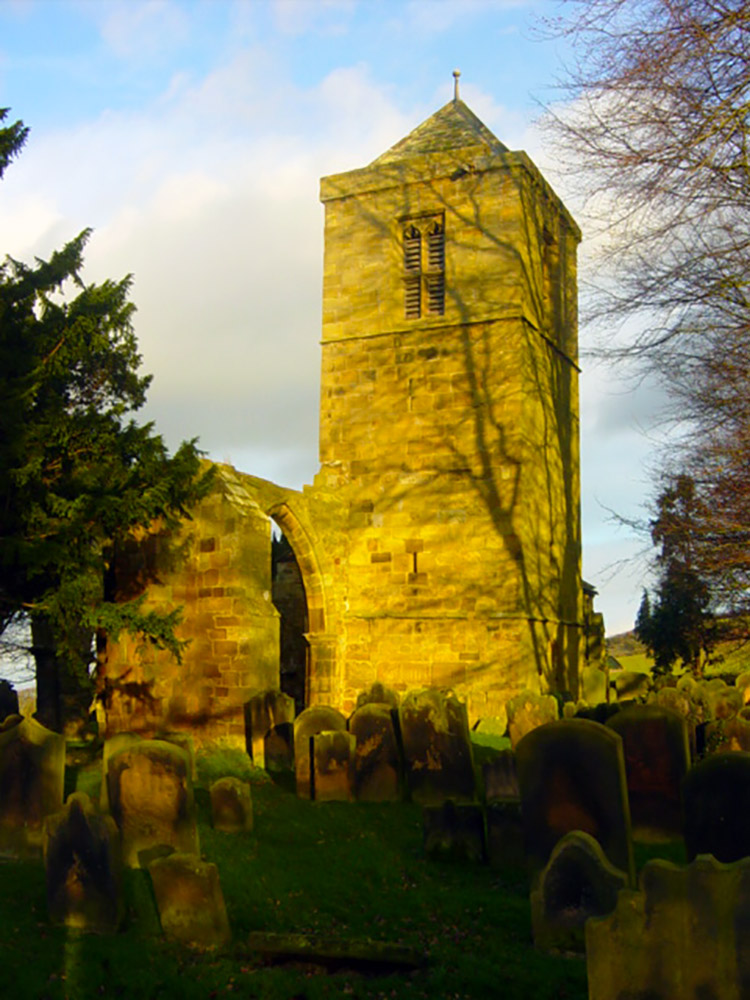 We left the moor top at Great Bonny Cliff and dropped down to the edge of Bonny Wood where we stopped for lunch. We all enjoyed our fare for we had earned it and Lil really enjoyed drinking her coffee. She enjoyed drinking my coffee too! You did need it more than I sweetheart. I made do with a swig of water, thank you Karen. The pork sandwiches and ham sandwiches were delicious, thanks Ray. After we had all enjoyed our refreshments Ray continued on with his accurate navigation and led us northwards on the edge of the wood past a fallen tree where we celebrated its past majesty with a picture and then past a solitary large boulder before heading into the woodland for an eerie passage. In parts the woodland was dense, so much so that day turned to night in an instant. It was truly fun walking though and although it was dark it was also dry. Not so when we left the woods though for we were immediately faced with crossing a stream and boggy area. This was negotiated by all of us quite well but it was followed by walking though a narrow track which was closed in by dense rhododendron thickets which was waterlogged. My feet were well and truly squelched during this course, as were Lil's. I am sure others were too. While getting got wet I did notice the Rhododendron were forming thick buds already. I anticipate an early spring bloom from them in 2005. Eventually we got through the thickets and were back down off the hills into more pasture fields. 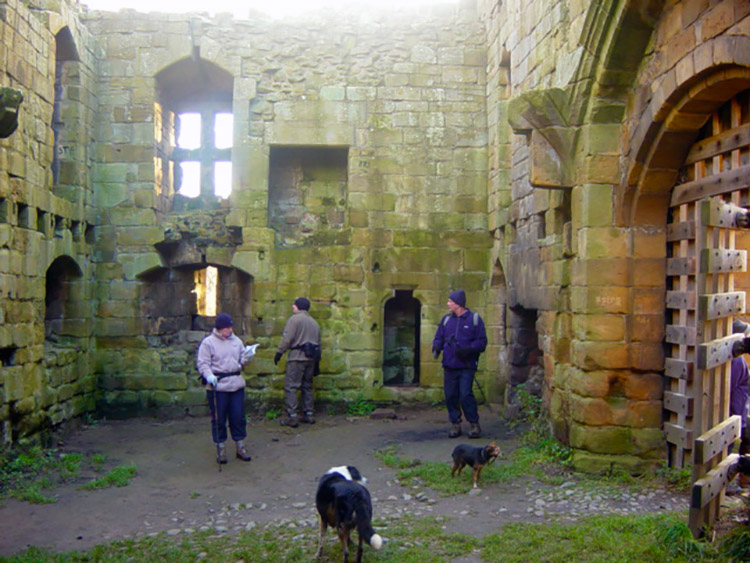 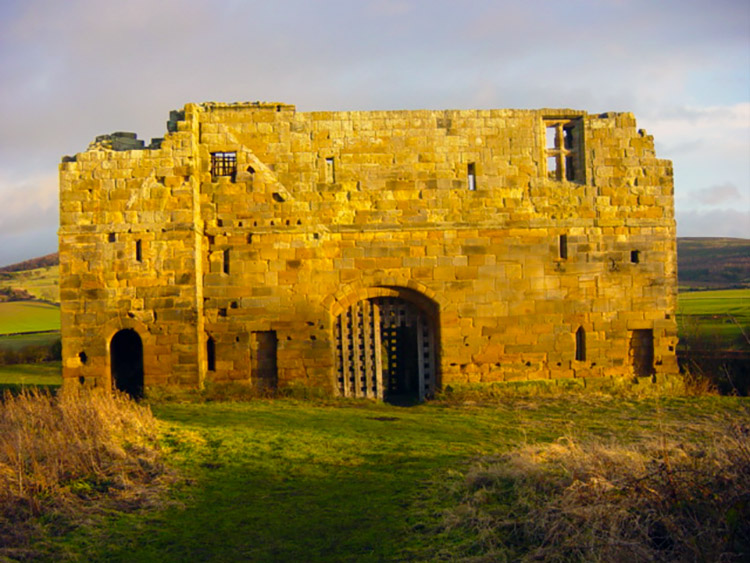 Sean took time to play with ice formed in puddles while we crossed the fields to Faceby where we stopped to enjoy a lovely pint at the Sutton Arms. It was a refreshing brew and suitably armed with temporary alcoholic energy we made our way across fields to the finale in the lost village of Whorlton. Apparently the village was devastated by plague in the late middle ages but there remains the impressive ruins of a medieval castle. The village is also home to a splendid church. St Mary's Church at Whorlton has a long history and it probably is linked to the castle back to the 12th century. The present buildings are much more recent though and are a lot newer than some of the stones in the graveyard. Read more on the history of St Mary's Church here. We enjoyed inspecting the church and the castle in the finale to our walk, it was an apt ending to a lovely day out for Whorlton is a hidden treasure in a beautiful setting on the edge of the Cleveland Hills and North York Moors National Park. I recommend a visit. From Whorlton we followed a metalled road back to Swainby and finished a fantastic day out. I was pleased Lil enjoyed it too as she found it not as difficult as she first thought. It was also super to be out walking with all the Brompton walking gang. Well done with the planning and execution Ray. Thanks everyone. I must meet up and walk with you all again. I enjoyed a great walk in some spectacular North Yorkshire scenery and I look forward to the next time.