Summary: This is a bracing walk with the expanse of Runswick Bay to enjoy before climbing up from the North Yorkshire coast near Kettleness to follow tracks inland to Goldsborough and then to follow the line of a disused railway. 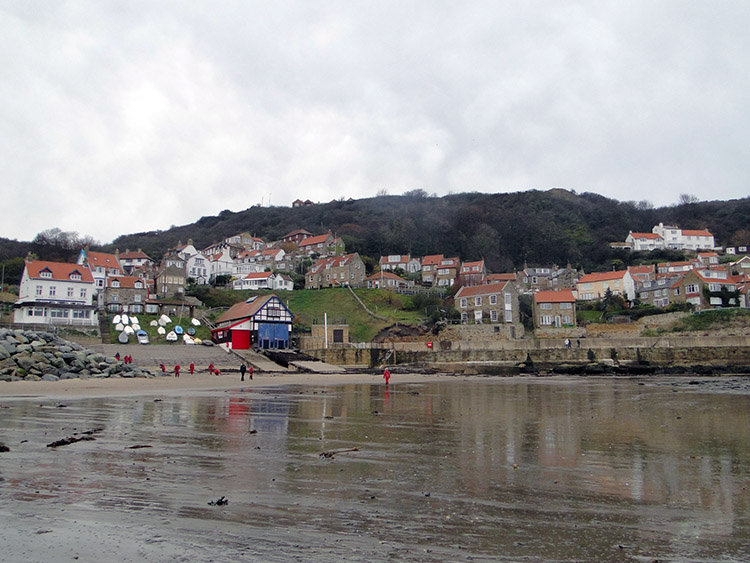 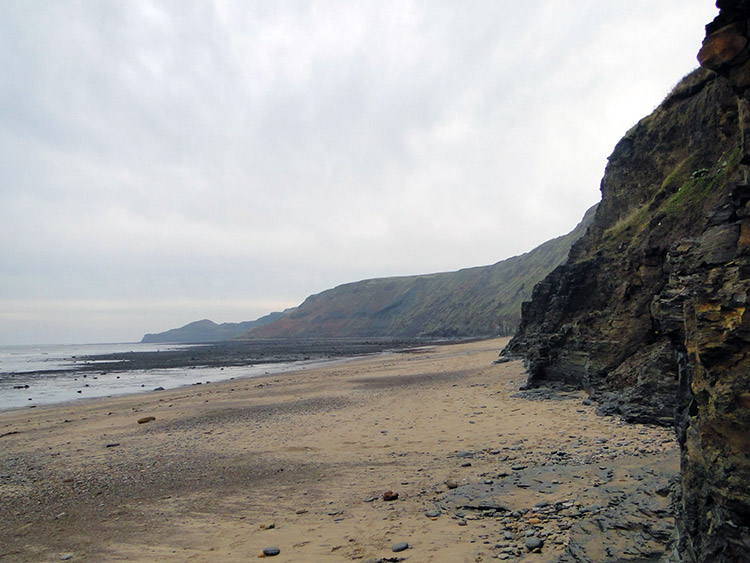 I have got to be perfectly honest, the middle of November is not my favourite time for walking and especially not on an overcast day but I was in the vicinity of Runswick Bay during a long weekend in Whitby and I had wanted to do this walk for a long time. I had first discovered the walk in a Cicerone guide book penned by Paddy Dillon, or at least the bones of it, for as often is, I planned to make a detour from from the prescribed track. Never follow convention, always make a walk your own if you possibly can, so this walk is more open land and less old railway route than the one I found in the book. My first detour from the book version of the walk was at the very start, from the visitors car park in Runswick Bay. Instead of heading straight out over the sands I took a little detour through the narrow windy streets of the coastal village. It was enchanting chocolate box stuff which, when past the last little house, changed markedly from comfortable to imposing as the view opened out into the gray panorama of the North Sea. Only one thing to do, I headed south east across the expanse of Runswick Sands. As I did so I watched groups of teachers and youngsters partaking in educational beachcombing activities. My education was yet another new walk ahead of me. 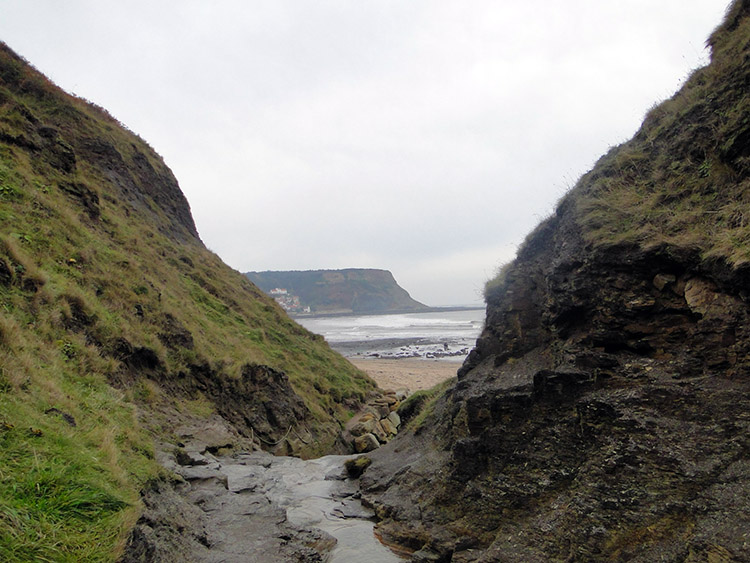 The ascent from Runswick Sands is via Hobb Holes 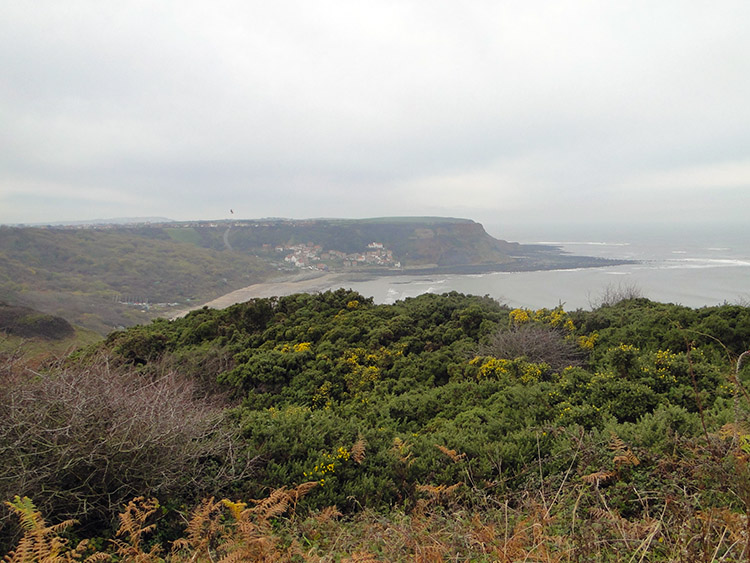 Runswick as seen from the cliff top near Hobb Holes

The crossing of Runswick Sands was pleasurable. The walking underfoot was firm and supportive, the type of sand ideal for strolling along and so unlike the soft sinking sands I experiences at Praa on the Cornish Coastal Path (South West Coast) walk a few years ago. Then it was exhausting crossing the bay, this time it was easy. The real work on the walk only began as I exited Runswick Sands by way of Hob Holes which is the first river valley south of Runswick. The climb out was slippery at first with a rope being provided to help me heave myself up on the waters side before I climbed from the valley by way of steps. There were plenty of them as I heaved my unfit body up from seaside to cliff above. I chuffed my way up taking a few brief stops on the way before emerging to glorious, if somewhat hazy views of the local coastline. Although it was dull at least it was not raining; that was promised for later in the day. 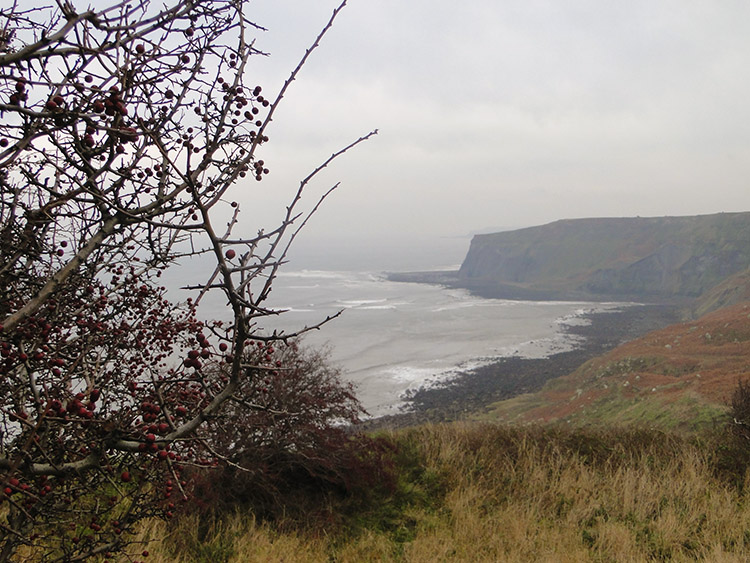 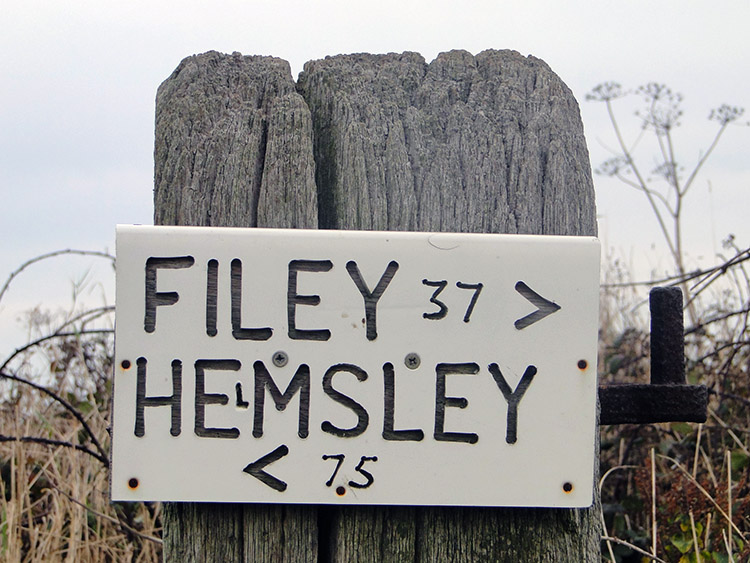 After I had completed the only real climb of the walk, all 100 metres of it I took a quick drink before taking in the views all around. To the north and east there was only sea, the North Sea and lots of it. A few cargo ships could be seen in the distance but generally it was quite, all quite becalmed although I guess water skiing was not a savoury option. To the south and west the view was across lush green fields with the odd habitation. On the level now I strolled along the path towards the coastal hamlet of Kettleness, set 100 metres above sea level. Not always had Kettleness been at this heady height though for my immediate target was the second village to bear the name. The headland near the village used to be worked for a variety of materials including alum, jet and ironstone. The previous village was on the headland and due to the coastal erosion that blights the north east coast it fell into the sea. All people survived but no buildings. For some while longer material works continued but that is at an end now, farming is the communities staple. After wandering through the village I continued close to an old railway line I was to encounter later and by keeping to the coast line I passed through hawthorn lined Scratch Alley before giving up the coast and heading inland. 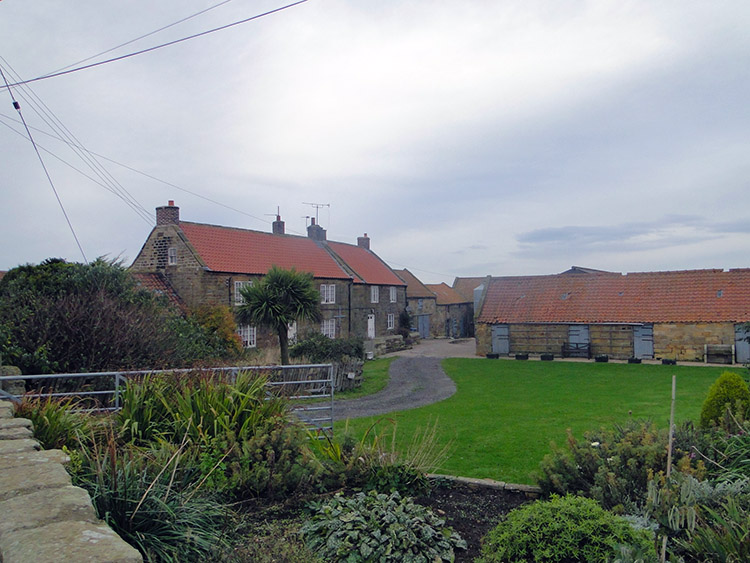 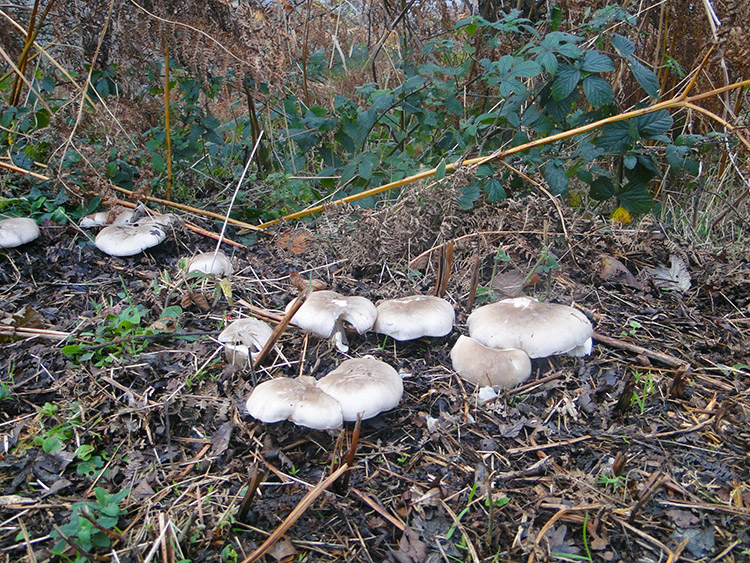 Fungi beside the old railway

Since the start of the walk I had been following the Cleveland Way, a walk I have never done in entirety but it would be interesting to know how much of it I have covered now. Perhaps I'll check it out. Back to the walk I followed a bridleway from the coast to meet a tarmac road which I followed west into the tiny village of Goldsborough. It was deathly quiet as I wandered through the village with the Fox and Hounds, its solitary pub being the first building I passed. I passed through the village and then took my major alternative from Paddy Dillon's way. He suggested turning right along a track back to the coast and from there following the old railway track all the way back to Runswick. I decided to follow a bridleway due west straight on after the village and then keep west over fields to a marked track due north to Butter Howe the site of an old roman signal station before turning west once again to meet the old railway track just north of Claymoor Farm. This farmland journey was remarkable because of the sheer number of Pheasant and Grouse I came across. Almost every step I took was interrupted by the birds break from cover. They were simply everywhere in overwhelming numbers. It soon became obvious they were bred and farmed for the table here, a diversity for the local farm community. Things were not to change as I descended from the fields to the railway. 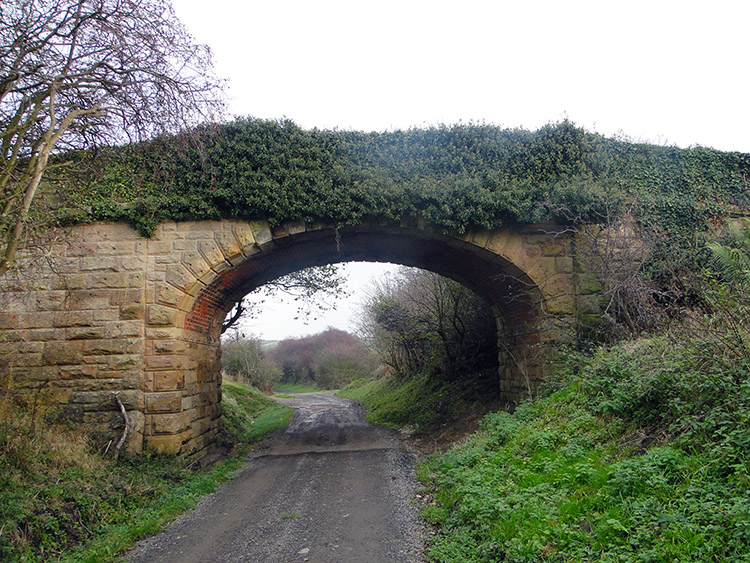 Walking on the route of the old railway 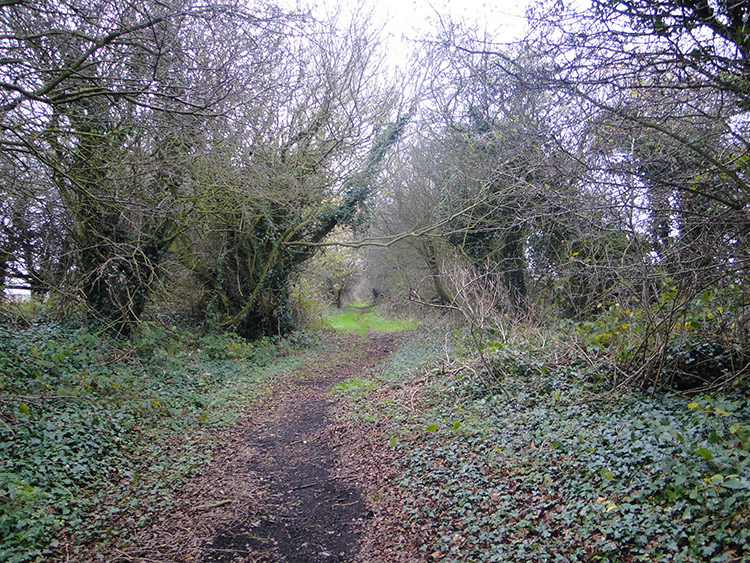 The track narrows after Low House

I joined the route of the disused railway track by crossing then walking down the side of a stone arch bridge, the first of four I was to count off during the foot journey along the lines of the old track. As I ambled along the track, the majority of it sheltered in a cutting, I came across lots more gangs of grouse who shuffled off as soon as they spotted me. It was a jolly old amble and I expect best enjoyed in spring with the many hawthorn bursting out in blossom but also delightful in late autumn with tons of berries assembled on the trees beside the old line. Eventually, and after three bridge arches had been passed under the track narrowed and soon after I left it by way of my exit onto the Ellerby to Runswick Bay road which I followed back to the high village and then I completed my journey by walking down a steep road back to the bay. While I shuffled down the last descent I looked over the sweeping sight of Runswick Sands that lay out in all its majesty before me. "Been there, done that", I thought.