Summary: Rudland Rigg forms part of an old drove road linking Kirkbymoorside to Stokesley and the Teesside conurbations. This walk follows Rudland Rigg for three miles before dropping down into the tiny hamlet of Cockayne at the head of Bransdale. In Cockayne there is a lovely small church where benches and seats are provided to enjoy the view which is also the ideal halfway point to take a break for refreshments. After the break climb out of the valley from Cockayne to the edge of Bilsdale East Moor we drop into Bransdale for a second time neat Lidmoor before climbing out to Ousegill Bridge and then follow Bransdale Road back to the start. 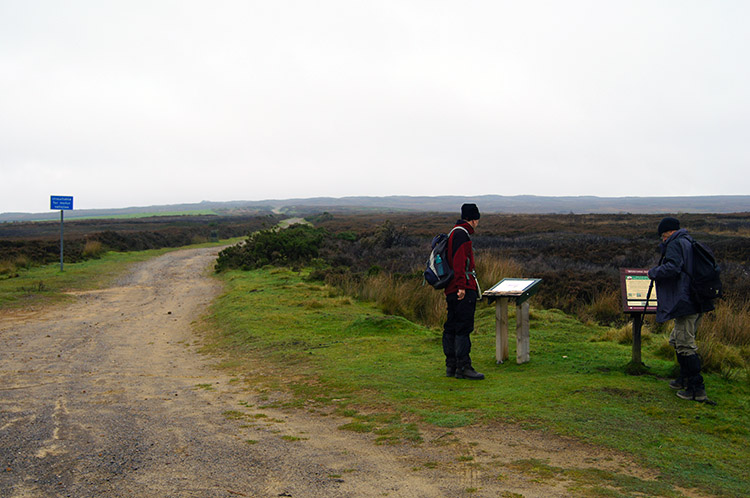 Checking out what to look out for 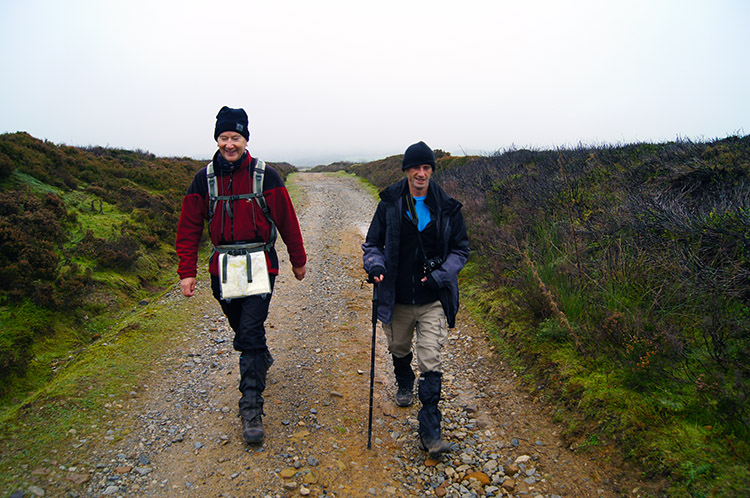 Strolling out on Rudland Rigg

It was late October and a dreary day when we started this upland North York Moors walk but Dave, John and I did not give a second thought about cancelling; we needed to get out into the fresh air and stretch our feet. The start certainly allowed us to do that as we march off from the southern end of the unmade Rudrigg Rigg track which forms part of the old Waingate road. As we walked along with gusto, the slightly rising track towards the high point of the road does not get steep enough to really impede progress, we spotted the last vestiges of purple in the heather. A couple of months ago the moor would have been a swathe of deep purple. We chatted as we walked too, catching up on events since we had last been out walking together. 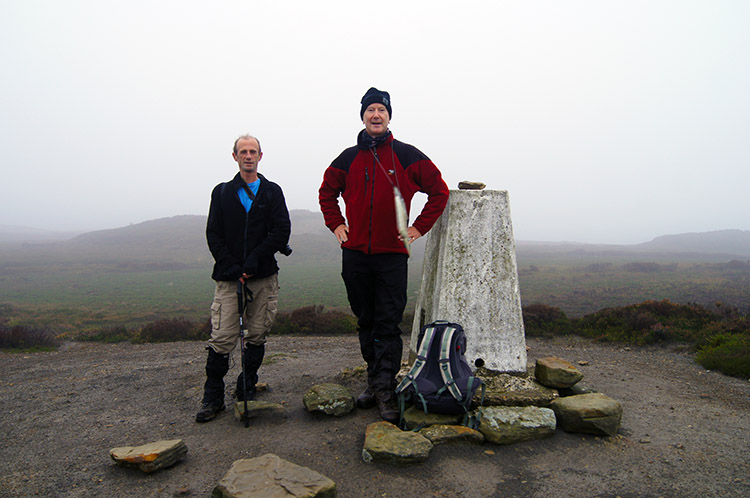 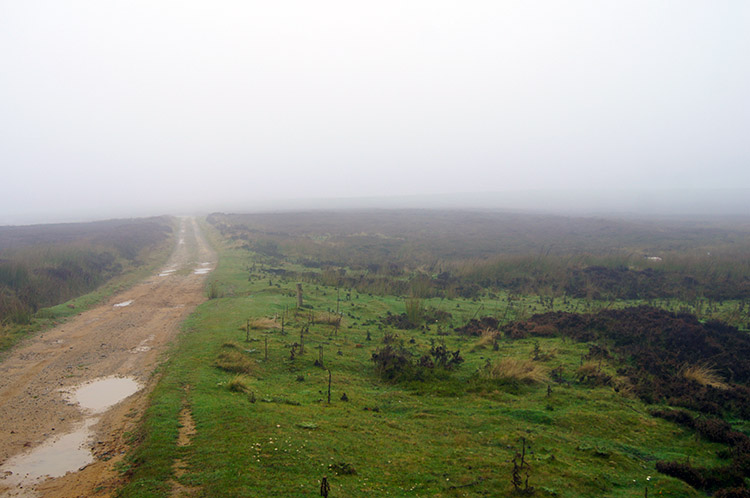 It was just short of two miles from our start on Bransdale Road to the trig point beside Rudland Rigg near Golden Heights and in that two miles we climbed 140 metres. I cannot say I noticed it though, it being one of those fantastic ascents to the highest ground done at such an even gradient that it was hardly discernible. What I did notice though was the visibility getting less as the low cloud closed in all around us. It was not a morning for enjoying the views and another of those unpredictable days in Britain which the BBC weather team struggled with. They had promised clearing skies from the outset and it was quite the opposite. Still, we were enjoying ourselves in the outdoors and the conditions meant the surprises were sudden rather than anticipated from a distance as we came upon them emerging out of the murk. 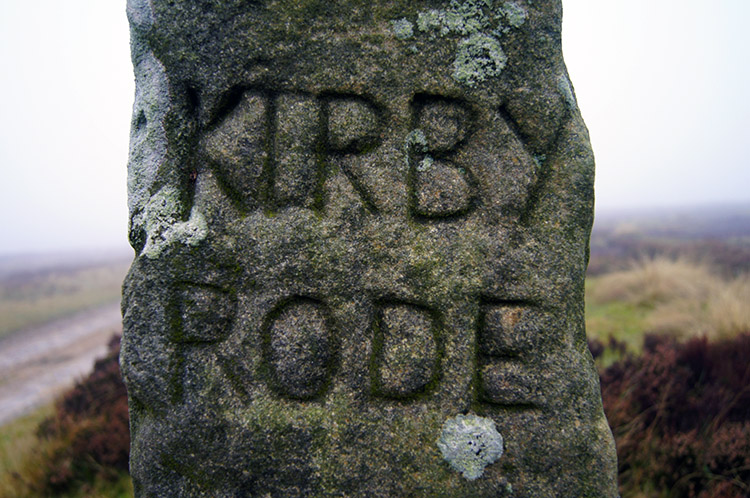 On the Kirby Rode 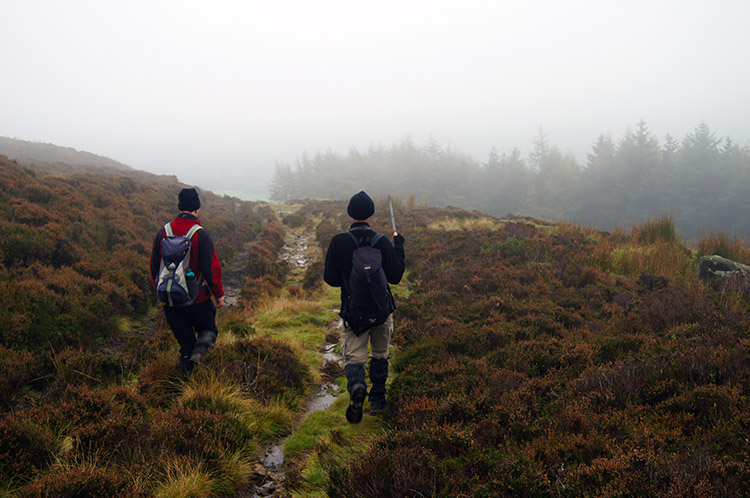 Dave spots woodland from out of the mist

The most significant surprise on the three mile stretch of walking along Rudrigg Rigg was the upright gritstone waypost we came to at Golden Heights. It had KIRBY RODE meaning the road to Kirkbymoorside on one side and STOXLE RODE meaning the road to Stokesley on the other. There are many wayposts and marker stones on and near the old tracks on the North York Moors, a number of them on the Clay Bank to Blakey Ridge track which intersects Waingate at Bloworth Crossing, a place very familiar with Coast to Coast walkers. I had seen those particular posts many times, it was the first time I had come to this one. Something to look out for on Rudland Rigg. Soon after passing the waypost we reached the point where our walk on Rudland Rigg/ Waingate ended. We left the track and headed west over open moor for about 200 yards before beginning our descent. 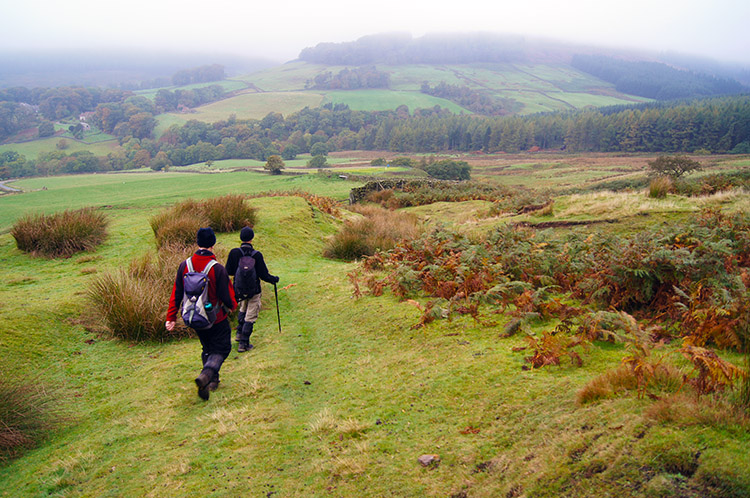 Descending from Rudland Rigg to Bransdale 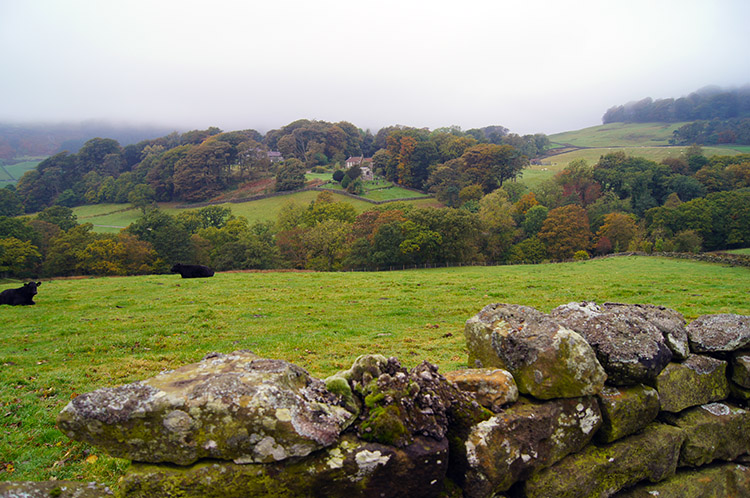 Looking across Bransdale to Cockayne

We were now on our way towards Bransdale by following a good path past a small plantation and then across upland enclosure fields towards Cow Syke. As we descended below 300 metres the views extended and we could see into Bransdale for an appreciable distance. Looking straight across the head of the dale we fixed our eyes on the leafy hamlet of Cockayne, one of the North York Moors most secluded places. Autumnal colour on the deciduous trees was pleasing despite the dull light; if it were in sunshine I imagine it would be a truly spectacular scene. 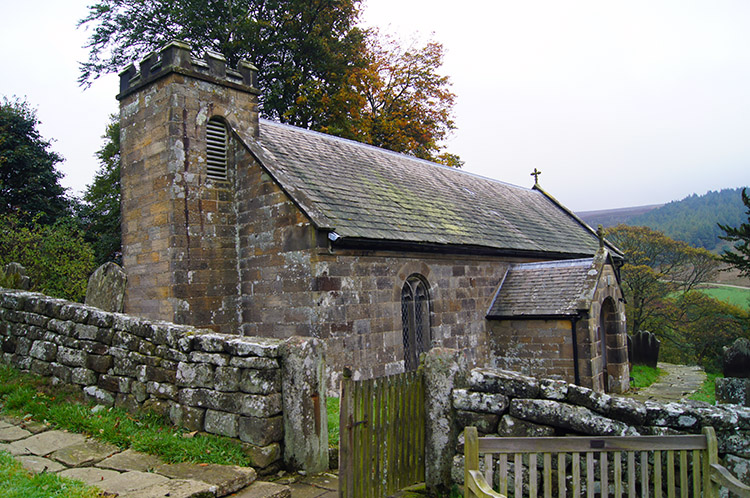 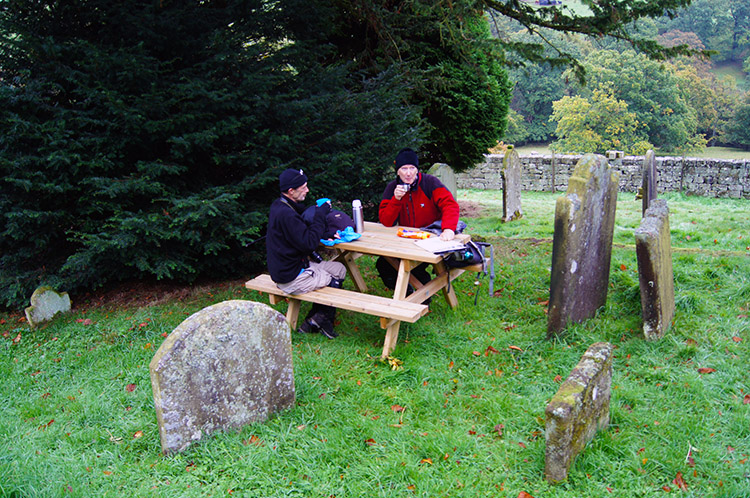 Lunch in the graveyard

Dave, John and I strolled along the access road from Cow Syke into Cockayne, the final section of road after the small road bridge over Bloworth Slack being a short steep haul of 40 metres ascent which warmed and tested the calves after the ease of the walk along Rudland Rigg and down to Bransdale. Cockayne, with the exception of the Church and Glebe is a hamlet entirely owned by the National Trust. So that explains why the place is so beautiful and tidy. Even the non National Trust church which we looked around is pristine, it is a litter free joy. In the grounds of the church we found tables with seating spread around the graveyard, interspersed around the sacred stones. We made use of them to take our lunch. After I had finished my refreshments, which was before Dave and John were ready, I stepped out of the church grounds and sat on a bench looking out over the upper Bransdale valley. It was such a relaxing place to sit and take in the view while John and Dave completed their lunches. I could have sat longer but all too soon Dave and John joined me to resume our walk. 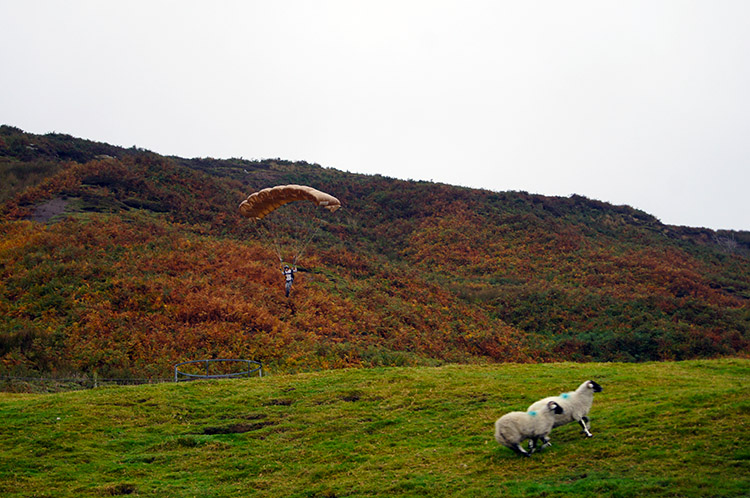 Funny place to find a parachutist 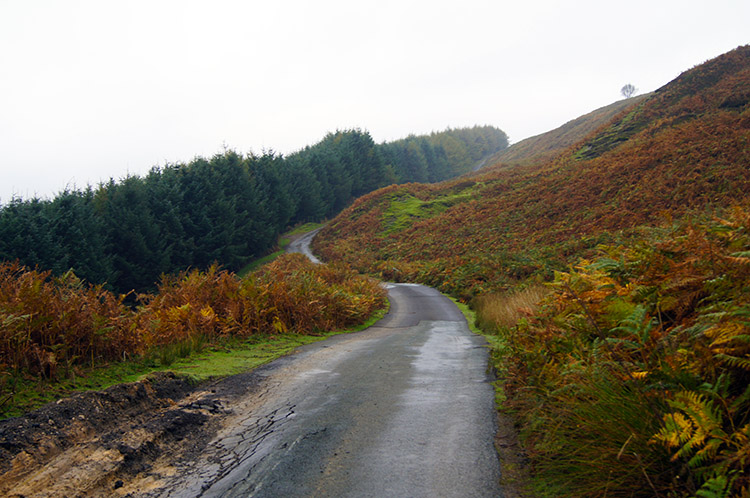 The road from Cockayne to Bilsdale East Moor

A funny thing happened as we headed from Cockayne to the valley floor and then along the road leading to Helmsley. I was convinced I could see a parachute hovering just above the hight line of Bilsdale East Moor. As we walked closer the parachute kept appearing and then disappearing. Both Dave and John cottoned on to the scene, indeed it was a parachute and as we passed the junction to Brack House it became obvious someone was trying to attempt a take-off and paraglide from the ridge top down to our level. Whoever it was must have spotted us for as we drew as close as we could be to the paraglider he took off a sailed down towards us, landing about 50 yards away. Sheep were startled, we were entertained. 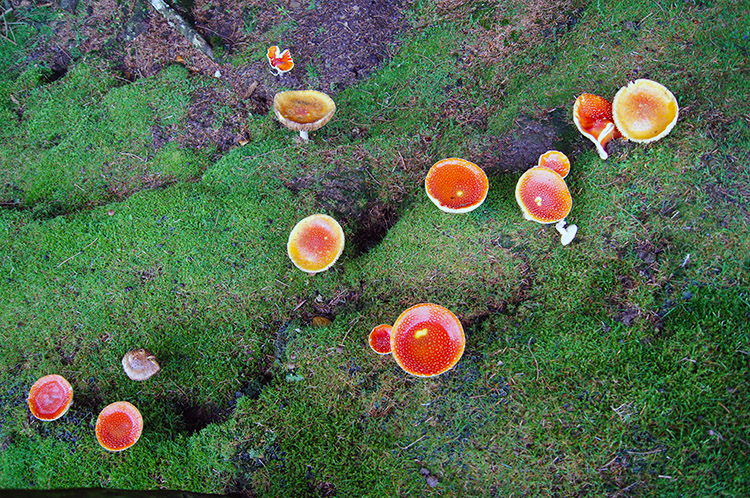 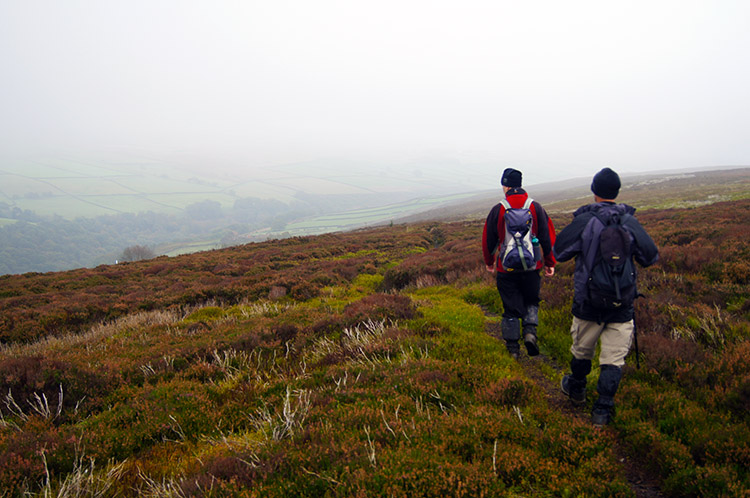 Descending towards Stork House in Bransdale

After our surprise of the paraglider moment we met and greeted the young aerobatics man and asked if he did it regularly. "My first time, I just finished making the parachute from a plan last week" he replied. We had witnessed an inaugural flight. Then as the young flyer rolled up his parachute in preparation for his next flight we bid him farewell and continued up the road to Bransdale Rigg. As with Rudland Rigg earlier we were on another 140 metre ascent, this time in a shorter distance and some short parts of the ascent were steeper than others making it a telling one. As is always though we made steady progress and soon reached the ridge. The low cloud greeted us again at the top. Once on the top ridge line we followed the Helmsley - Cockayne Road for a further mile which, including the section from Cow Sike to Cockayne accounted for three miles of road or roadside walking and in the three miles we never encountered a single car. Perhaps the quite was due to the road being gated, drivers having to physically get out and open them - off putting for lots of motorists, great for walkers. 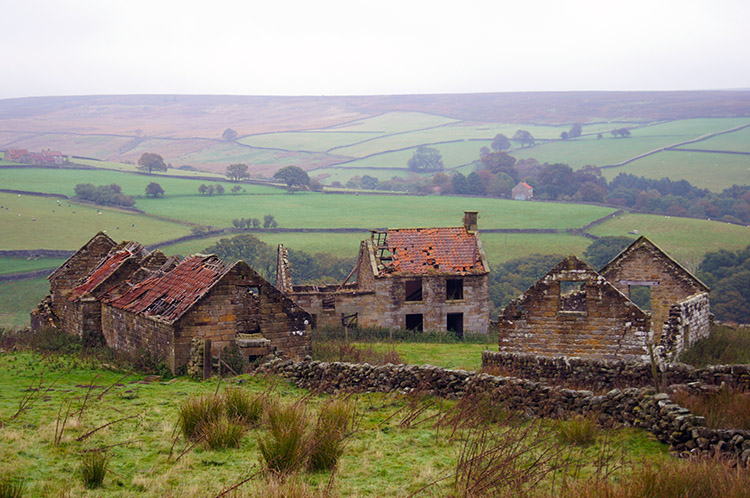 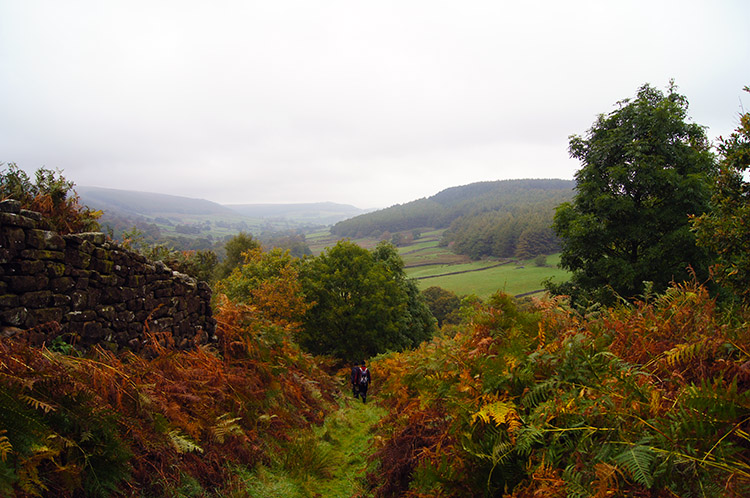 The path from Stork House to Low Lidmoor

From leaving the vehicle starved road we followed a good path to Lambfold Hill which provided us with great views into middle Bransdale. Yes it was still hazy in the lower cloud but we could at least now see across the valley and up and down it too. One scene took my attention and I honed my eyes in on it. e were walked directly toward it too, the derelict farmstead and outbuildings of Stork House. "What a place" I imagined to myself and spoke with Dave and John on how sympathetic renovation would make the place a beautiful one to live in. Once in the midst of the decaying buildings my thoughts were consolidated, the setting of Stork House is perfect for purveyors of beauty. And even in the isolation of being cut-off for a while in a harsh winter - as long as I had ample provisions it would be most appealing. From flights of fancy I reverted to reality as we left the grounds of Stork House and headed down a track to Low Lidmoor. 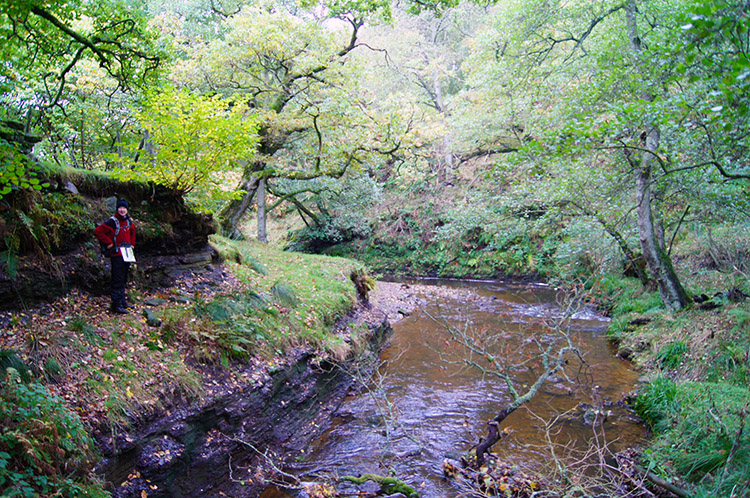 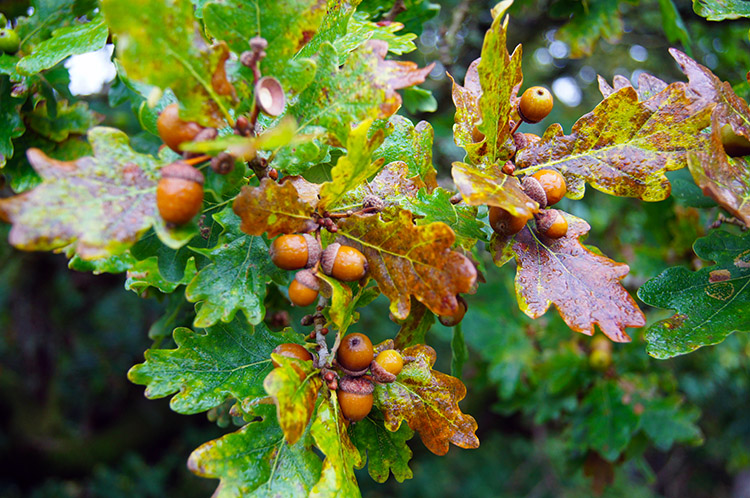 The walk along the track cum path from Stork House to Low Lidmoor involved crossing Hodge Beck which is the waterway carving through the valley of Bransdale since forming at the confluence of Badger Gill and Bloworth Slack just south of Cockayne. Hodge Beck terminates further south as it flows into the River Dove near Great Edstone. We crossed Hodge Beck by a sturdy wooden footbridge and then followed a cut as the beck rounded a bend before leaving the waters side to climb to the buildings of Low Lidmoor, after which we made a short descent along another leafy lane to cross a bridge over Shaw Beck before ascending again to Moor House Farm by which time we had gained 100 metres height from the crossing of Hodge Beck. 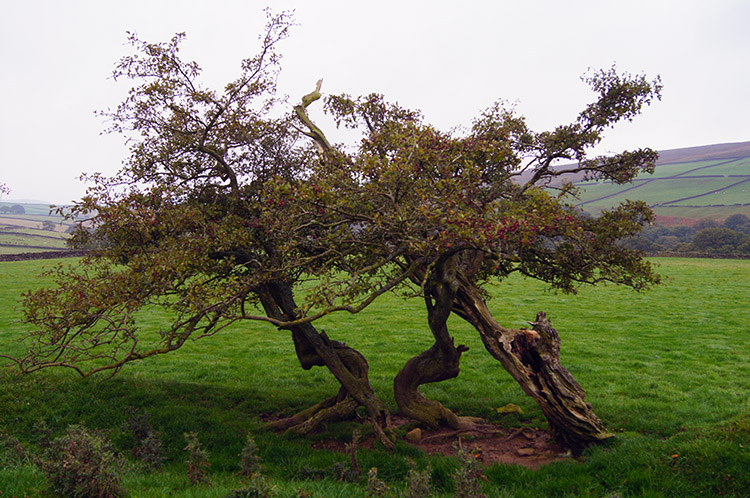 Lonely hawthorn, once part of an extended line 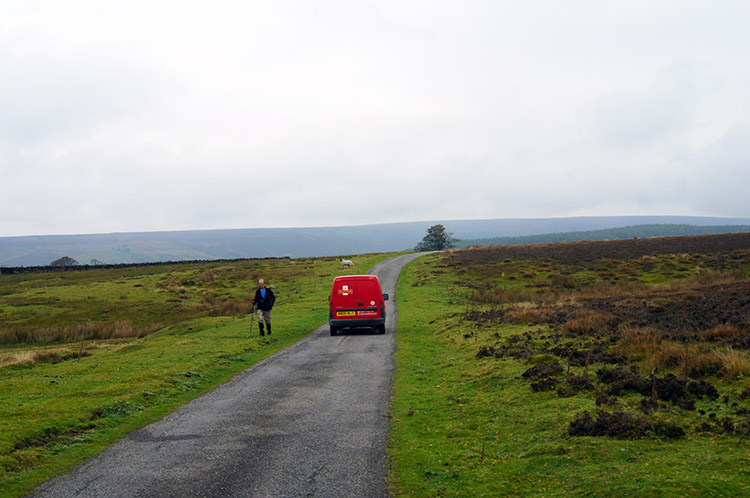 We now faced a moor top walk to Ousegill Bridge and then along Bransdale Road back to the start on Rudland Rigg. But, as might be said by John in one of his theatrical pantomime roles "Oh no we did not". We had two cars with us and as we had left John's car near Ousegill Bridge we avoided the final two miles of walking alongside Bransdale Road to complete the circular walk shown on the map and on the trackfiles. You can do the same if you have two vehicles, if you have not you can do our trick. The last two miles to complete the circular would not have been a problem but as things turned out it was fortuitous. As we drove into Gillamore for a post walk pint the rain began to fall. Despite the persistent low cloud our walk had been entirely dry, it would not have been so had we not shortened it by design. Luck fell our way.