Summary: While this Peak District walk is centered on Dove Dale it is the hills on either side of the most popular of all the Derbyshire Dales which take prominence. Starting from the public car park beside the Old Dog public house the first destination is Thorpe Pastures which is crossed before the hills shielding the east of Dove Dale are crossed to reach Upper Taylor's Wood, from where the walk descends into the valley at the Dove Holes caves. Along the valley to Ilam Rock we go before steeply climbing out of the valley via Dovedale Wood to Air Cottage and on to cross the top of Bunster Hill. Then it is down into Dove Dale again, walking from the car park to the stepping stones before turning right and into a climb through Lin Dale which leads back to Thorpe by dissecting Thorpe Cloud and Hamston Hill. Okay, let's go; follow me, my pal Steve and his trusty dog Keira on the walk. 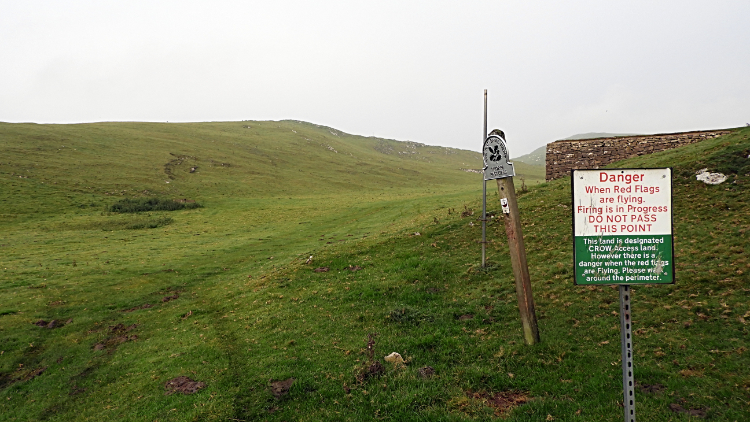 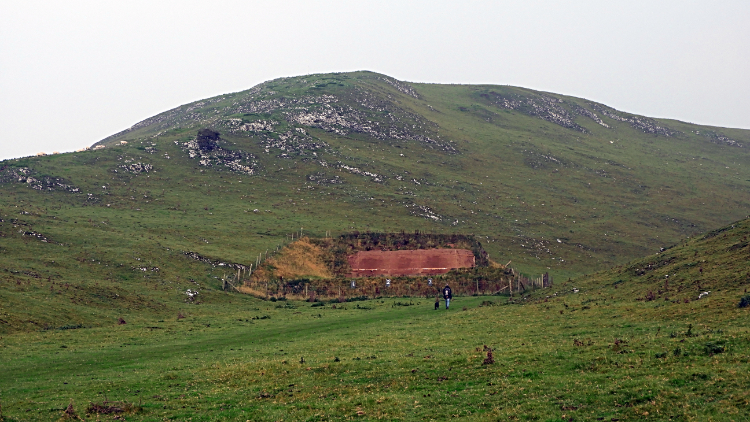 From the car park Steve, Keira and me walked north along Gag Lane for five hundred metres before reaching a gap in the left hand wall with a way mark post indicating 'Public footpath to Thorpe'. It led us westwards across a few fields to the lush cropped grass fields of Thorpe Pastures which are in the ownership of the National Trust. I didn't know that but the oak leaf sign was proof enough. There was another sign here too, one saying 'Danger, When Red Flags are flying. Firing is in progress. DO NOT PASS THIS POINT'. There is a rifle range nearby so if red flags are flying you are required to walk around the perimeter. With no flags flying today we headed straight to the rifle range and climbed the hill just behind it. 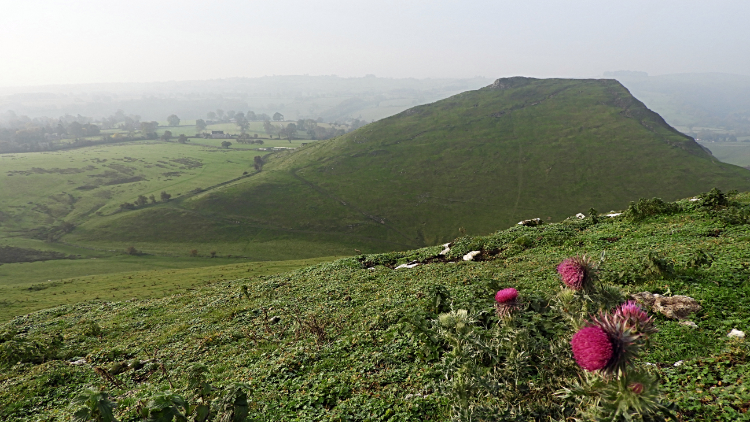 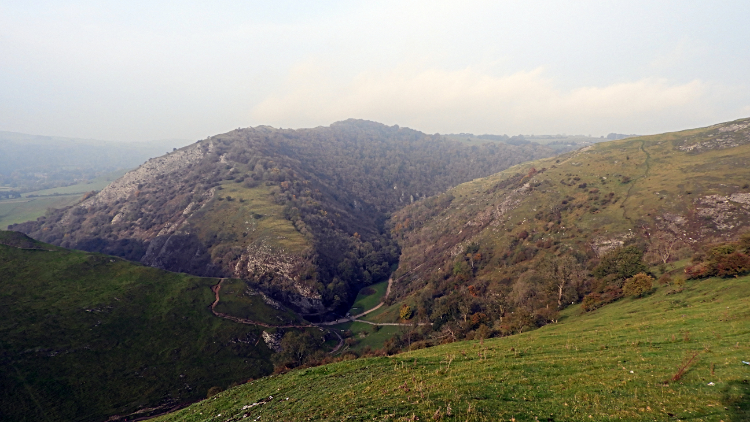 After climbing the hill beyond the rifle range the impressive limestone hill that is Thorpe Cloud appeared into view. It is an impressive hill from other places, not least the villages of Ilam and Thorpe which I have enjoyed before. From my vantage point now on top of Thorpe Pastures, at a little higher than its 280 metre summit, it was such an thrilling sight. And even more so as I reached the highest point of the pastures at around 300 metres where I enjoyed the terrific natural artwork of Thorpe Cloud, Dove Dale, and our ultimate destination of Bunster Hill. All in one scene. 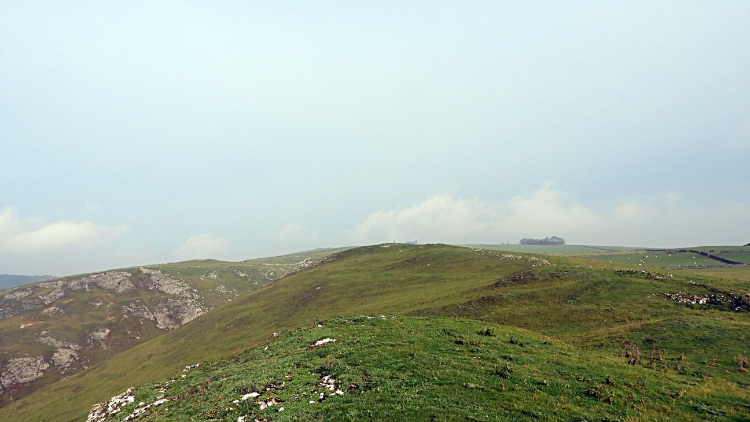 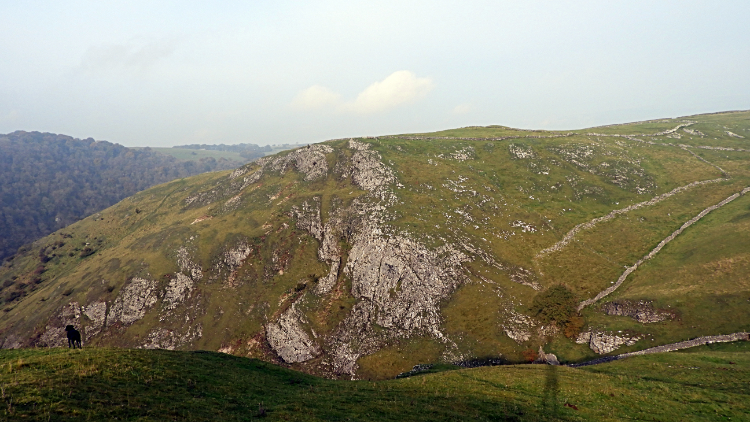 Gap from Thorpe Pastures to the Dove Dale Hills

Steve and I continued on our way across the pasture, enjoying the raw open air of an early November day. The sun was out but milky and not throwing out much heat at all. And the sun was saying see you for the day anyway, hiding behind building cloud. Though it did not rain our coats were to be kept on all the way. Now, while still up top of Thorpe Pastures we came to an interesting rectangular aluminum pole in the ground, stood upright and about eight feet high. There was no mark on it at all, no indication of its purpose. We left confused. 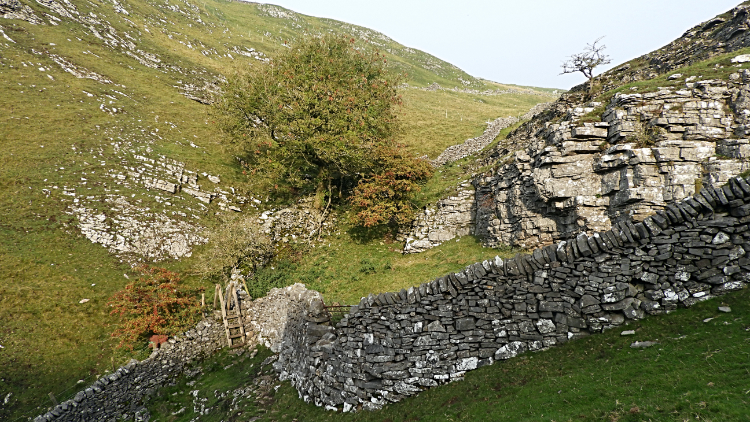 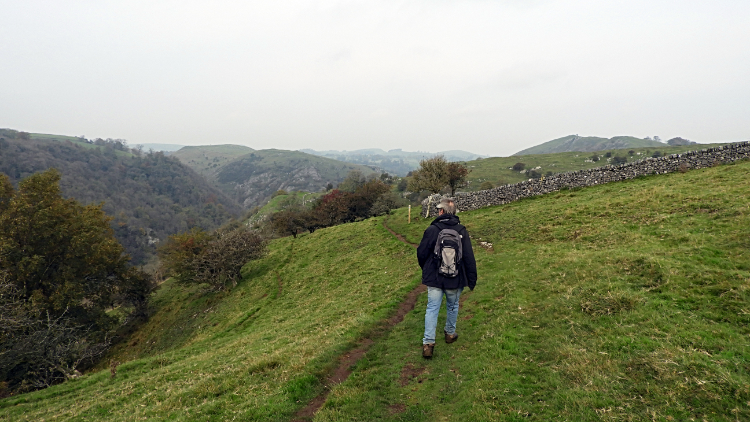 Back to the walk. We were on a steep and careful descent from Thorpe Pastures now, edging down to the corner of a field where a ladder stile gave us access to the range of hills protecting the east side of Dove Dale. It was as stiff a climb up from the stile as it had been a shuffle down. We climbed fifty metres up along a fence line in a breath and had to take a short rest. If we thought that was tough though then that was nothing to what we had to come. for now we shall wait for that bit of fun. 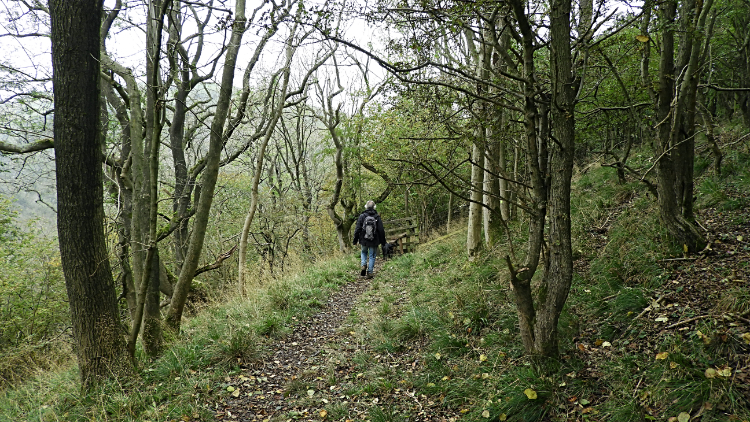 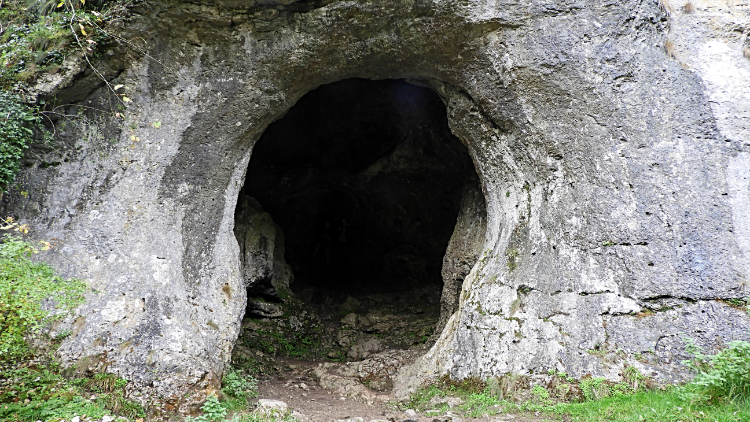 The walk along the tops running parallel to Dove Dale on the east side was great. We passed some confused sheep and occasionally we interrupted gangs of Rooks grazing on the uplands. If we got too close to them they would fly off while caw cawing in the small groups typical of a winters walk. On our march northwards we passed over the limestone obelisks of Tissington Spires without noticing. They were lower than us and out of sight. After passing the spires we curved around the head of Sharplow Dale which led to our descent into Dove Dale by way of Upper Taylor's Wood. Our 150 metre descent ended on our arrival in Dove Dale at the caves of Dove Holes. 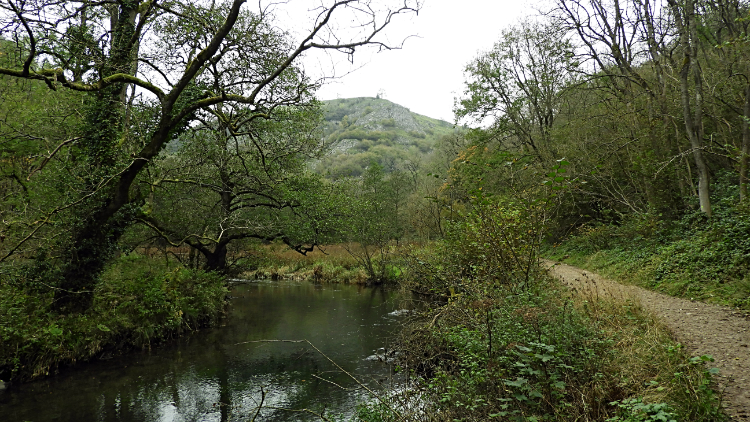 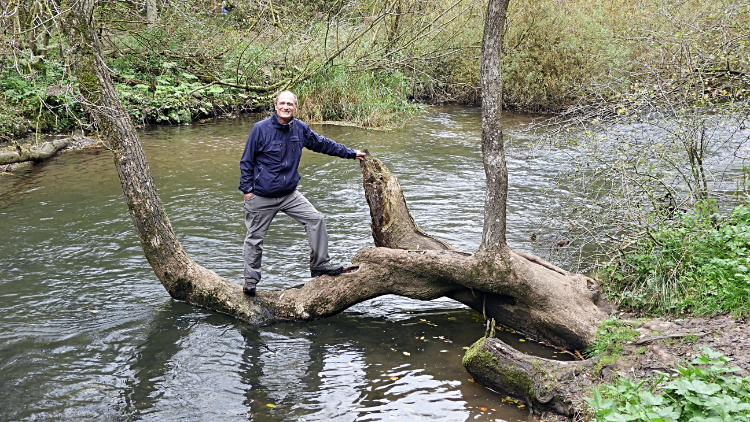 Messing about in the river

Now it was time for a bit of fun. Keira took hers by jumping into the River Dove and having a swim. Every time Steve and I walk along rivers or canals with her she, with the gentlest demeanour, a cross between Springer and Labrador, is always keen to get in the water. Not so keen myself I did want to step on to a tree which instead of sending its trunk up into the air spread it out halfway over the river first, then up into the air. I took advantage of the fact to step out across it. Just as I would have done as a young lad fifty years earlier! Steve did not follow my lead though we both would have some fun together in a minute or two. After a little more gentle walking in Dove Dale beside the river to reach Ilam Rock. 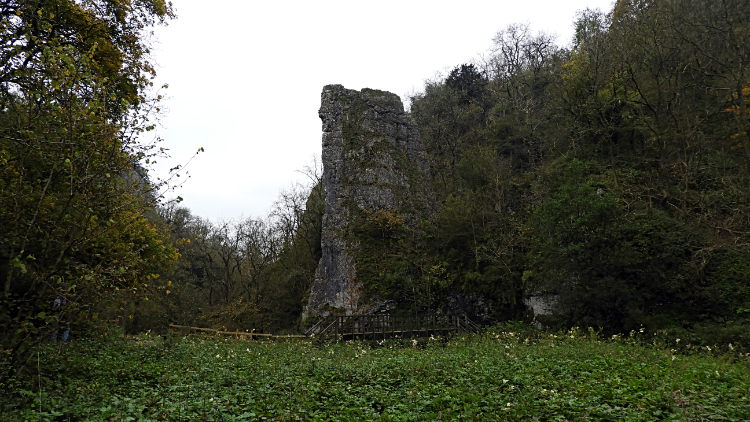 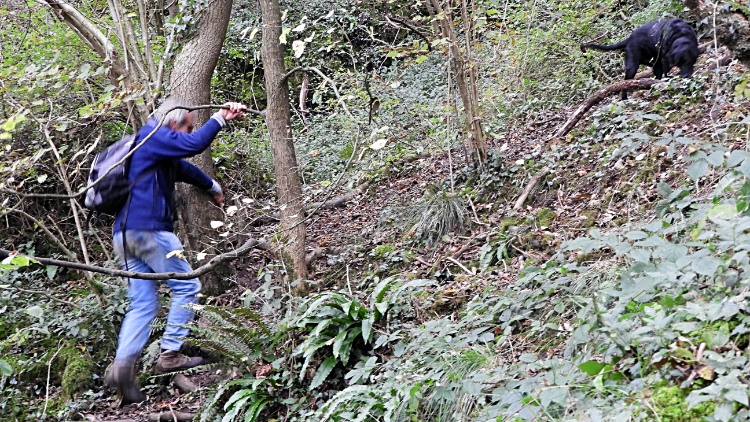 Ilam Rock is spectacular, a twenty five metre high leaning finger of limestone. The rock was not to be dwelt upon though, it was simply the landmark we had been looking for as our path out of Dove Dale began its precipitous course just behind it. After crossing the footbridge of the River Dove we edged on the path around the rock and climbed up and up. Steeply. For two lads, combined age 133, we made a good job of it. Ascending 150 metres in just 300 metres of distance we scaled a 50% gradient and though we did it in stages I reckon we did very well considering. I recall struggling more on such arduous ascents twenty to thirty years ago so we should be very pleased. We made the climb in fifteen minutes and I know three of four minutes were taken up by me photographing lichens, mosses and fungi. So as for the climb, that's a win. 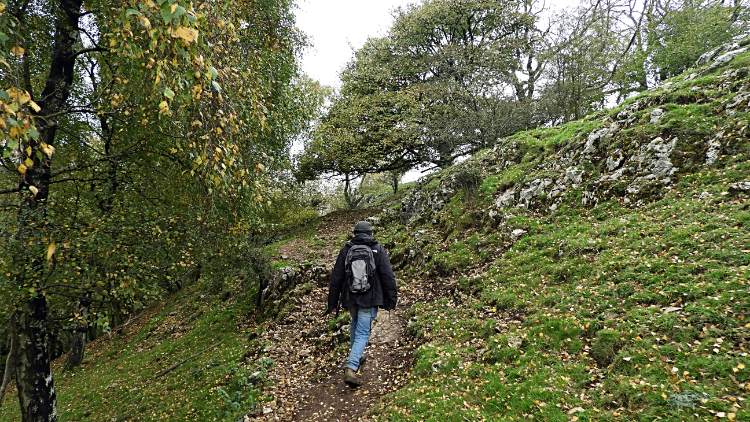 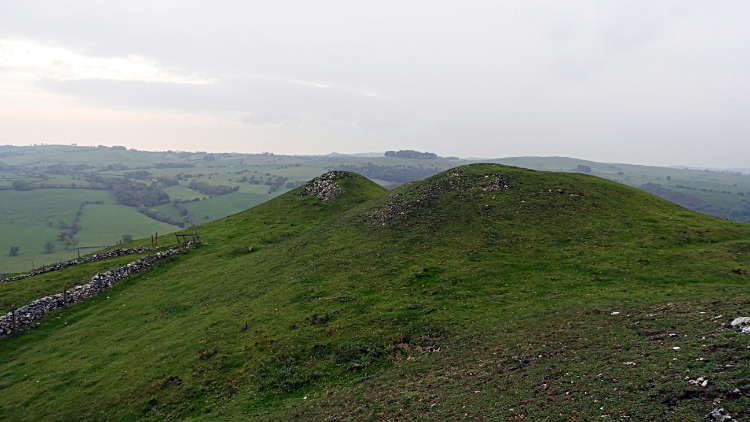 Next up to delight us after the fulsome effort of the steep climb was a pleasant walk through the top part of Dovedale Wood. The Woodland Trust says 'Dovedale Wood is one of the best woods in the country. Rocks and screes which are the result of frost and ice on the high cliffs above the river have developed rare mosses, lichens and flowers, such as the abundant Herb Robert, and the best grassland has been maintained by sheep grazing.' What did I say, I knew there was a reason for me to take the pictures during the climb. From the joy of Dovedale Wood we emerged into the open, crossing a field leading to Air Cottage and then to Ilamtops Farm from where we followed an avenue of mature trees to reach Bunster Hill. Back at over 300 metres and topping out at the high point of our walk at around 320 metres, the views south were lovely, across the village of Ilam and to the village of Thorpe, the way back and where we were soon to return. 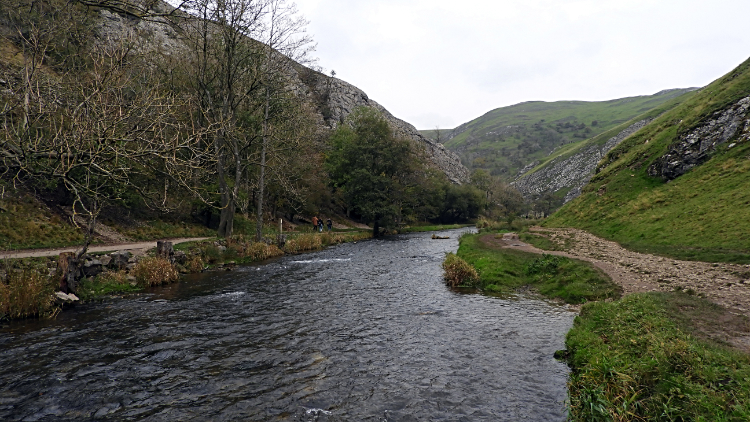 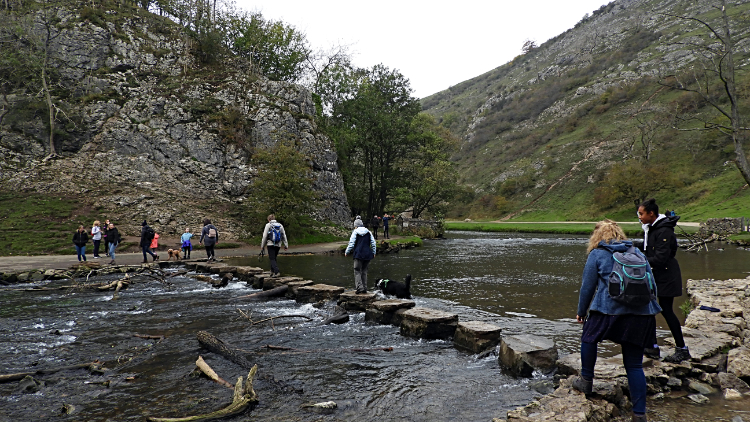 After dropping down from Bunster Hill Steve decided to head straight back to Thorpe via the field crossing path to Walton Hotel and roadside thereafter while I decided to track back into Dove Dale and circumnavigate the north side of Thorpe Cloud. By looking at the map during the walk I had been intrigued by Lin Dale and wanted to check it out. Steve was okay with that so we temporarily parted company. A path conveniently transited me on the south side of the east outlier of Bunster Hill to the main Dove Dale car park where I reached the crowds. Despite it being a cool and now overcast November day there were plenty of folk about. Sticking to the east side of the River Dove and on the west fringe of Thorpe Cloud I walked a merry walk to reach the popular site of the Dove Dale Stepping Stones where plenty of folk were stepping out across them. I watched a moment or two and then, knowing I had to keep our agreed timescale, turned right from Dove Dale and up into Lin Dale. 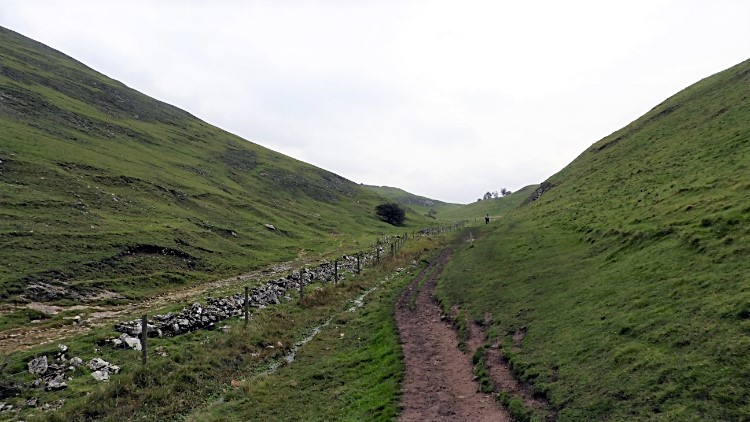 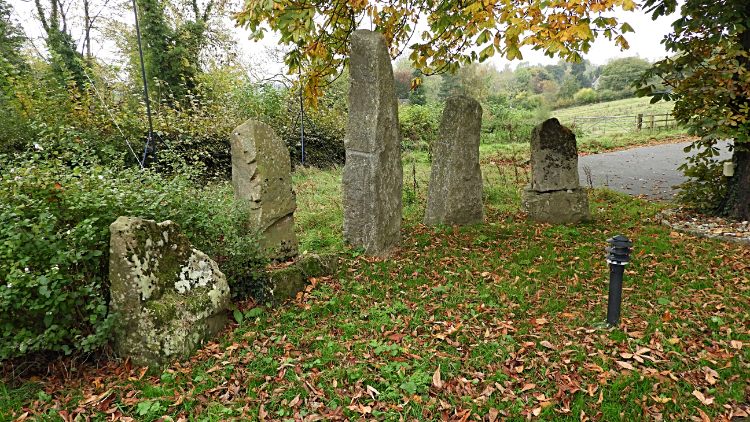 Lin Dale was nothing like I expected. The Ordnance Survey Explorer map shows a watercourse running down it for around 300 metres but there was nothing like. Just a trickle for about the first 100 metres or so, much like water running down the side of a road after a rainstorm. Not a beck at all, not a little stream either. I bet in summer that Lin Dale is completely dry above ground. It nearly was in November. At least I had checked it out and in doing so explored the enigmatic east side of Thorpe Cloud. And it did give me natural access to the path leading south-east between Thorpe Cloud and Hamston Hill and back to Thorpe. Here I passed some interesting Drumlin Hills, much like the creation of giant mutant moles. Arriving in the village beyond the humps at precisely the same time as Steve was walking through, and after I had checked out five upright stones that were most likely folly and nothing historic beyond the Victorians, we climbed the road together back to the car. "That was a really good walk" said Steve. To which I nodded.