Summary: This is a jewel of a walk. I can promise you a fantastic short stroll that is hailed as one of the 'hidden gems of Scotland'. The walk is a superb journey through lovely woodland with a big burn and a bear! 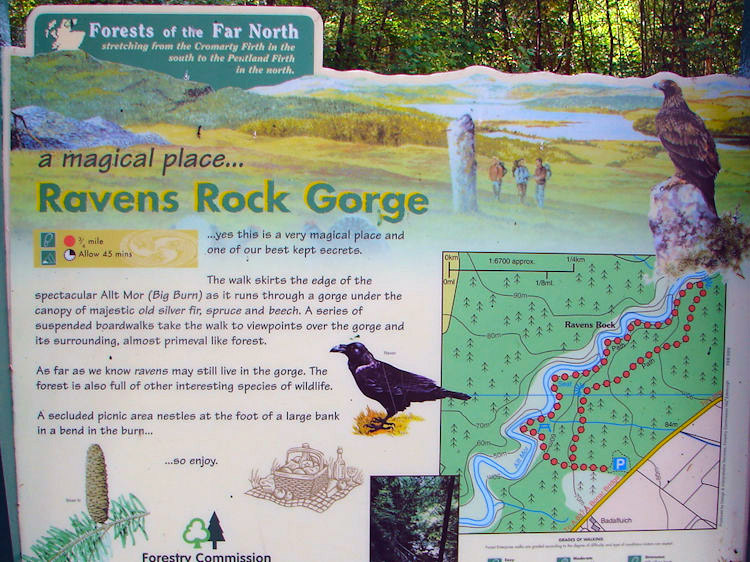 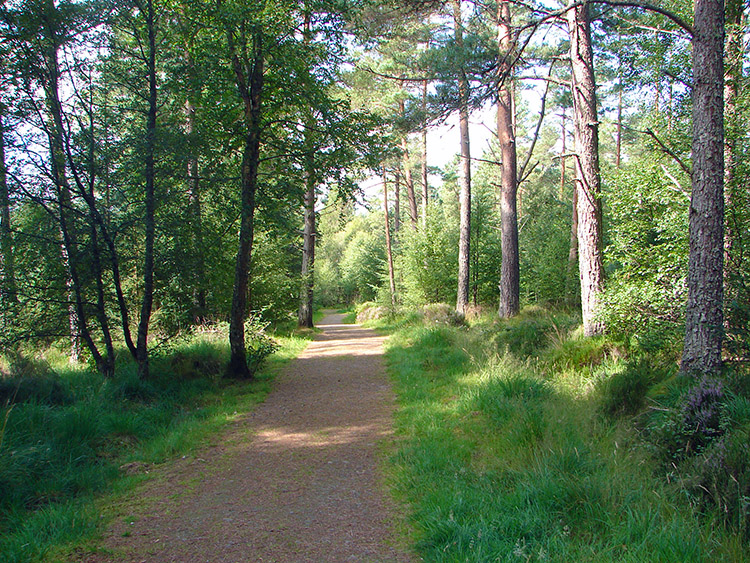 It was so surreal the way we reached this walk. A couple of weeks before the Scotland holiday I had read about 100 magical walks inn the UK in the Sunday Independent while enjoying a Sunday pint in the Pine Martin in Harrogate. I was so interested that I keep the feature and put it on my office desk. Alas, while packing I forget the cutting (amongst other things, more walks, hotel details ,etc!) and so I was resigned to not finding this place. But lo and behold while touring from Ullapool to the North East of Scotland we took in a tour of Inverpolly Nature reserve, Lochinver to see Suilven & Quinag and then along the A837 to Lairg. By using my SatNav on shortest route we headed down a narrow road and unbelievably I suddenly spotted Ravens Rock Gorge while rounding a bend. We stopped immediately and I shrieked a loud WOW! 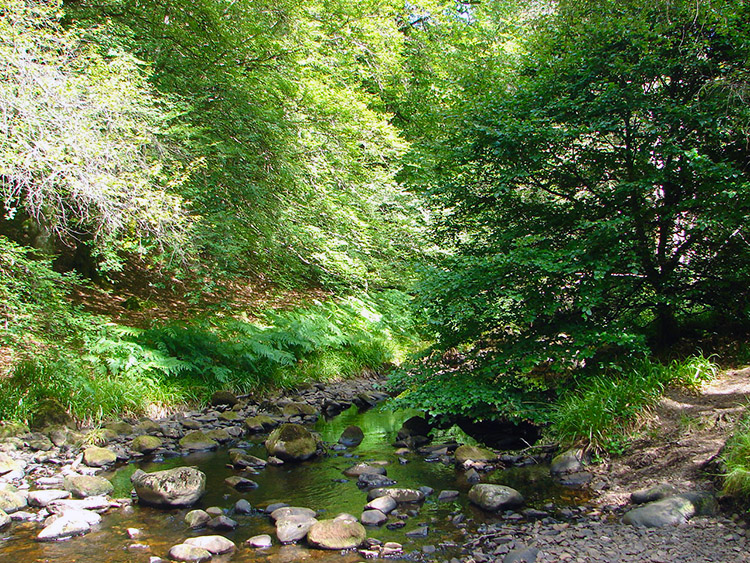 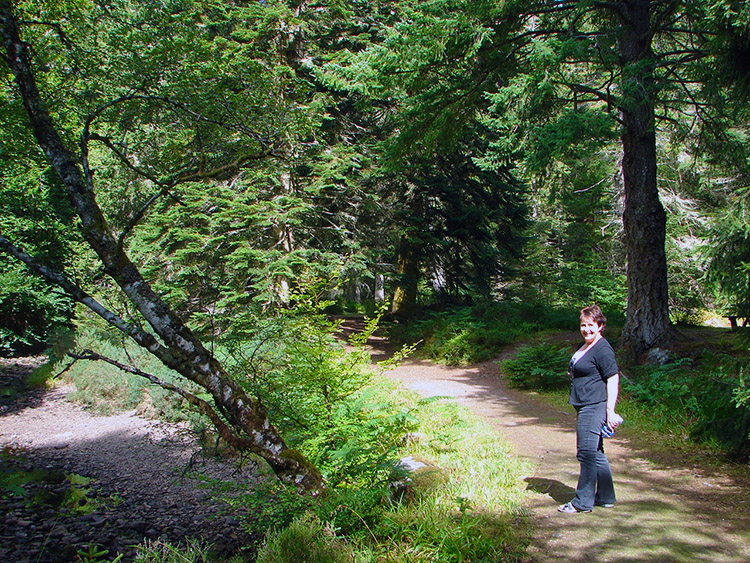 Lil on her enjoyable walk

Another WOW was that the day was incredibly beautiful with a blanket of blue sky above ensuring we would enjoy this magical walk in unbroken sunshine. And so while bubbling with my unbridled joy at finding Ravens Rock Gorge (which had now rubbed off on Lil too) we headed down the marked track into the woodland and as we descended to the burn the shimmering light that penetrated the tree canopy provided an ever changing pattern of features made by the trees on the ground below. we soon reached Alt Mor big Burn) and followed it upstream. 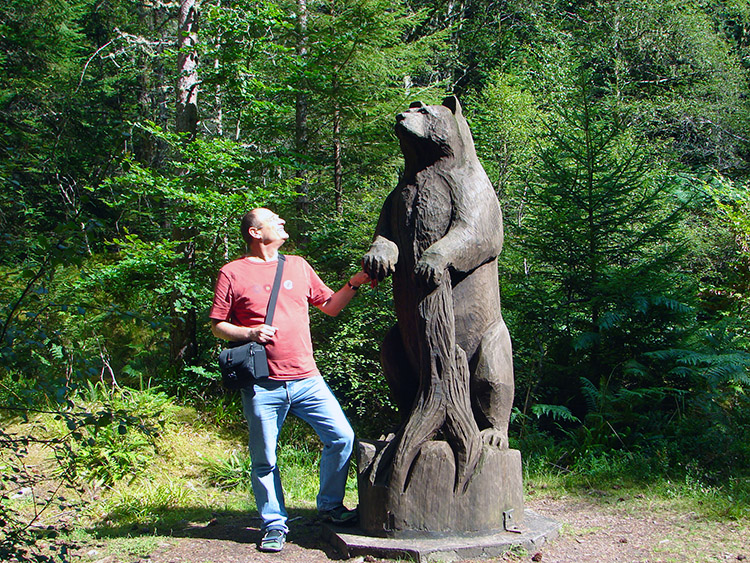 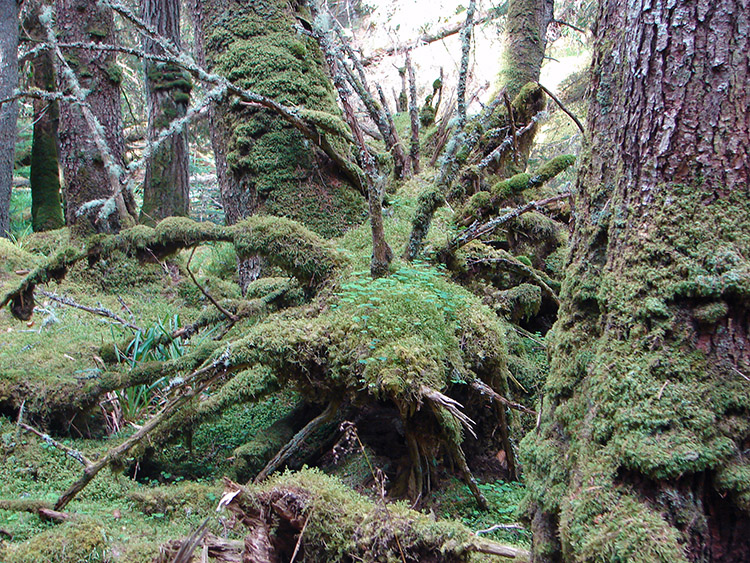 Is this a spider I see?

Lil was leading us along the burn when suddenly she exclaimed "You're not going to believe this" about something ahead of us. I walked to her and then I saw her attraction of attention. There was a big bear standing proudly. "Hello Yogi" I said. Then after paying him suitable respect we kept on along the track which Lil said was "A walk with goblins and fairies" until Lil stopped again to peer at a fallen tree where the roots made an artistic shape "Is this a spider I see" Lil added. It certainly could be taken for one & would have sprung to life in a Tolkien tale. 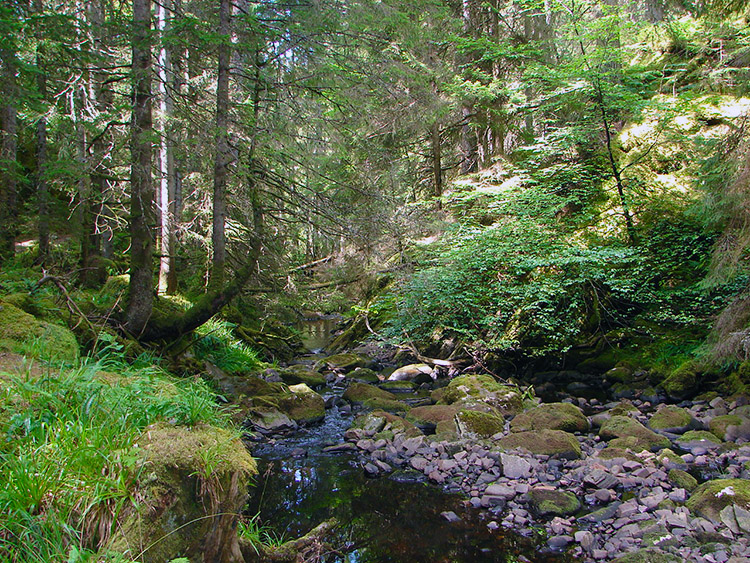 Down by the Burn 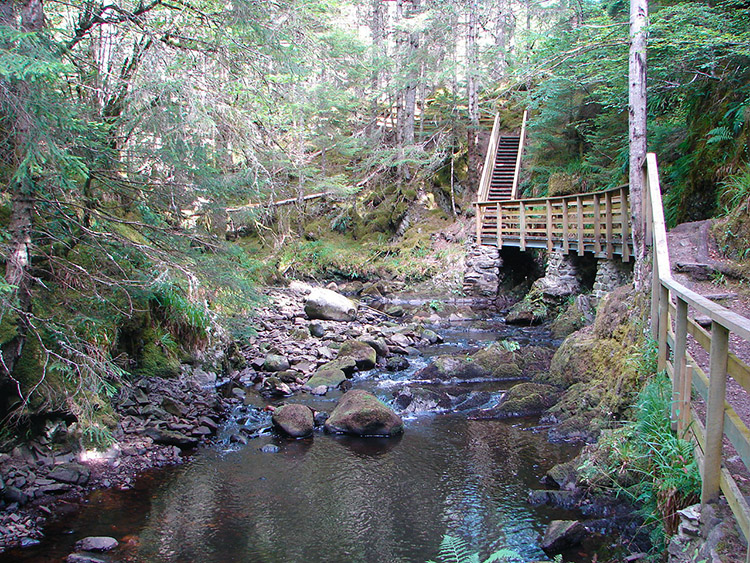 For interest the Independent feature that first attracted me to this walk read 'Mixed wood, with silver fir, spruce, Scots pine, and beech, plus the thrilling Allt Mor (big burn, or stream) running through a gorge. A series of suspended boardwalks have been built over the gorge and surrounding woods. The area is notable for its mosses and ferns, which give a lush look to the woods on even the hottest days. Otter and pine marten are resident, although rarely seen. Growing on the floor is the blaeberry, better known as the bilberry or whortleberry south of the border. The Forestry Commission says: "This is a magical place, one of Scotland's best-kept secrets." And ravens may still live here'. 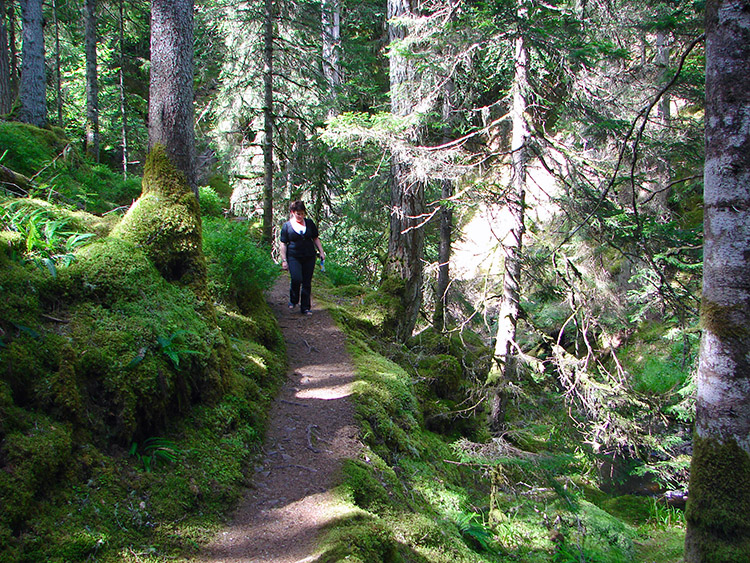 Walking through the woods 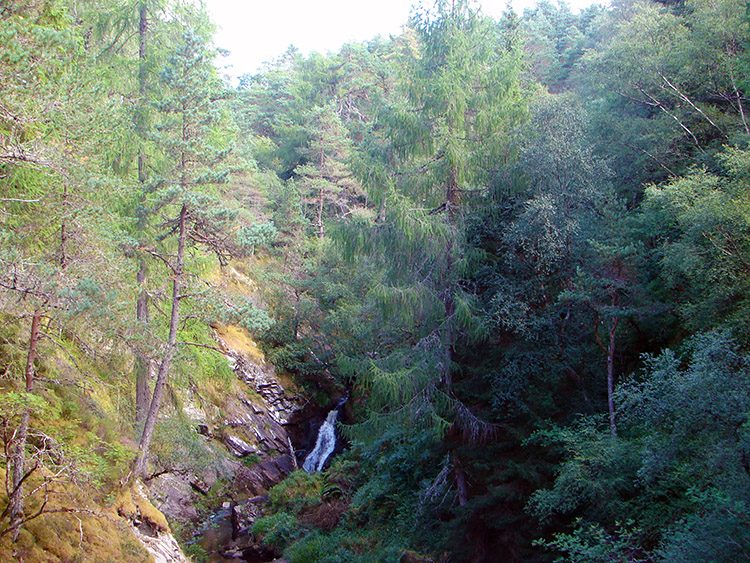 Looking down on Alt Mor

The feature was spot on and I am so pleased I read the paper that Sunday while in the pub. For those of you who prefer longer walks the Forestry Commission have set up lots of walks around Raven's Rock Gorge. There are river routes near to Cassely Bridge which offer a complete contrast to the forest walks and there is also access to the Falls of Achness and the Falls of Shin are not far away. We visited them after our walk to see the Salmon leaping. 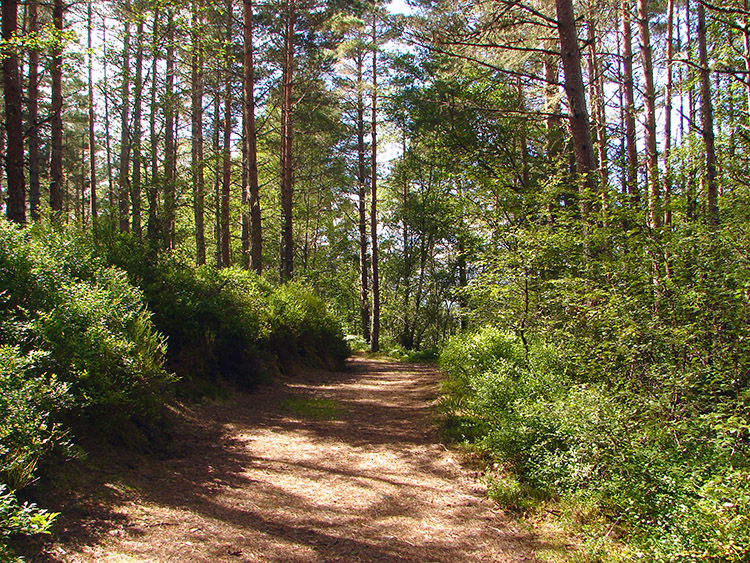 The sun casts fascinating shadows in the woodland 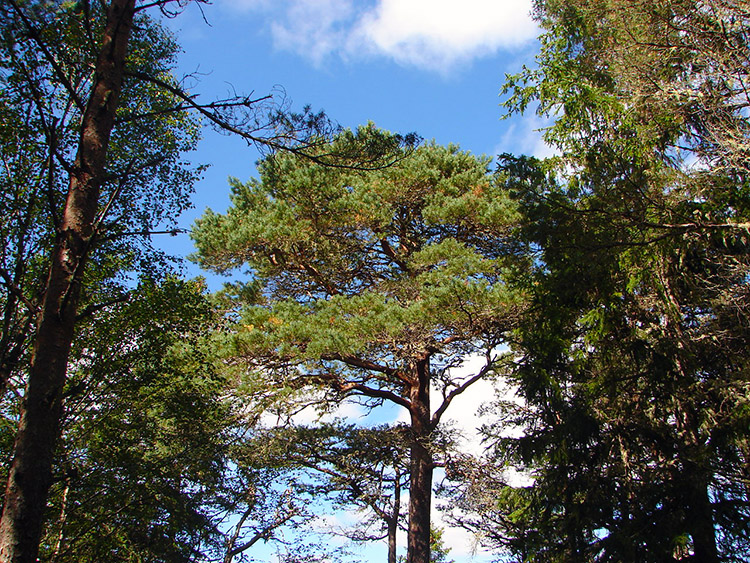 After taking a break to take in the Alt Mor and the small waterfall we headed up the track and followed the delightful woodland path to the viewpoint from where we could see the local moorland. A bench allowed us to sit a while and take in the beautiful sights before we embarked on the final few hundred metres back to the car. We thanked our lucky stars because in our Scotland Holiday 2008 we were blessed with great weather while the rest of the UK sunk and above all we found stupendous walks like this one. 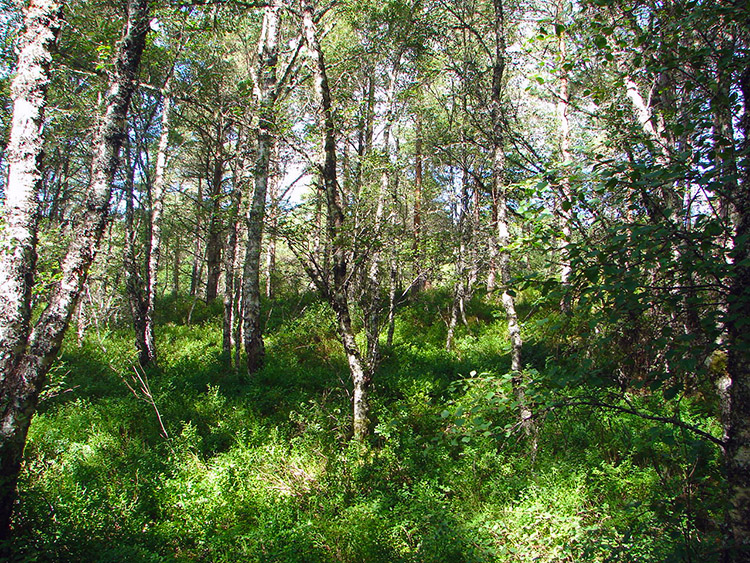 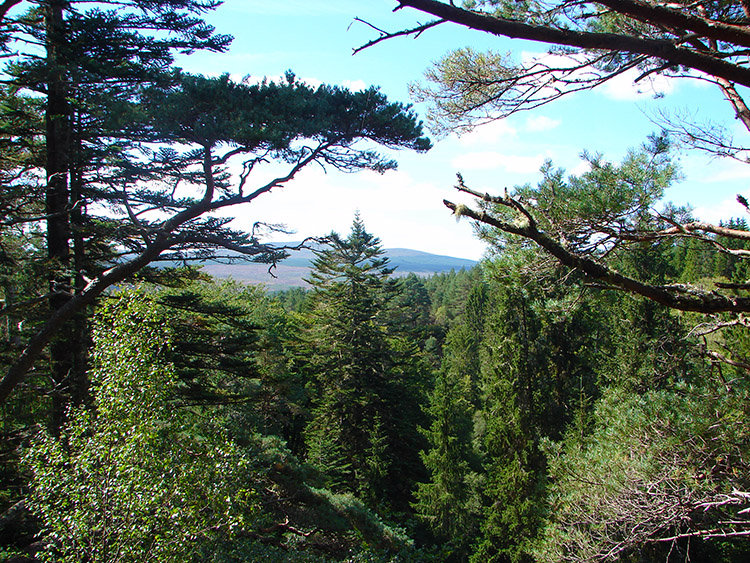 Looking out to the moors
Scotland Homepage
Copyright © 2003-2021 Walking Englishman. All rights reserved.