Summary: This beautiful walk on Handa Island is taken in the company of birds for they are the habitants here and we the accepted visitors. The island is home to around 200,000 breding seabirds and the spectacle is awesome. 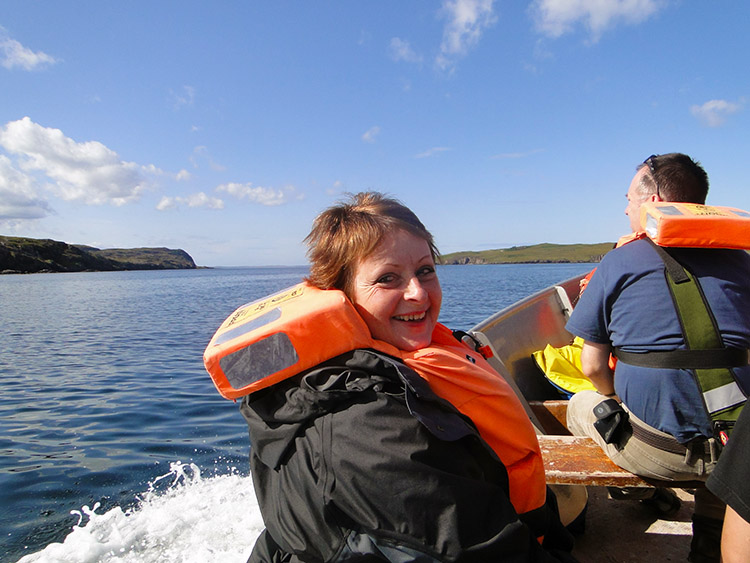 On the ferry from Tarbet to Handa Island 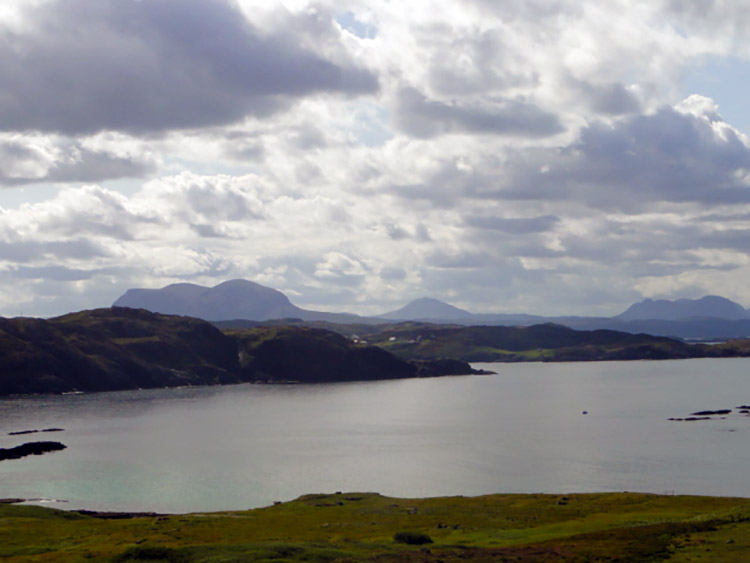 Looking south to Quinag and Suilven

This was a wonderful experience, the walk being totally unplanned. During our Scotland 2009 summer holiday we had stayed the previous night in Ullapool and I just happened to come across a leaflet about the island in the Harbour Lights hotel while eating breakfast. The leaflet provided a perfect solution to our day in Wester Ross as I wanted to do a walk and Lil wanted to see some wildlife. Handa Island was to satisfy both our wishes perfectly. The day was lovely with sunshine beaming down on the spectacular and iconic Wester Ross mountains such as Suilven, Quinag, Stac Pollaidh and Canisp. As we drove past them on our route north to Tarbet I did feel a pang of regret, I had planned to climb Suilven on this trip but our itinerary left things too tight to do so. I made a mental note of planning it properly next time, maybe a week up here with the lads? Anyway, this time I was fulfilling a wish for Lil and as I had kept things a surprise during the drive she was excited when I drove down the road to the small hamlet and said to her "Do you fancy a boat trip?" "Where to?" she replied. "To take a short walk around an island with lots of wild birds" I added. "Yes please!" was the answer I expected but nonetheless one I was very pleased to receive. 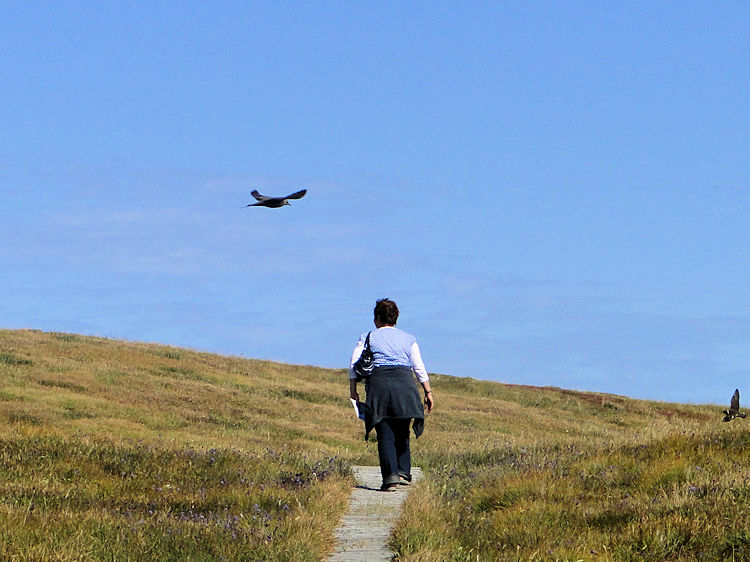 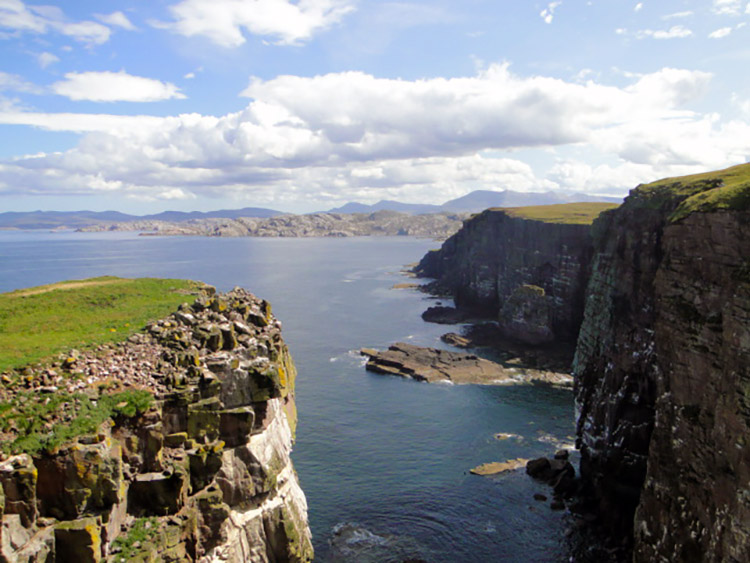 On parking up the car Lil walked down to the boat pier to ask when the next boat crossing to the island was. We were delighted to be told that one was going straight away. Perfect, for we were the last to board the small boat for 10 - 12 people that the owners prefer to fill before taking the passengers to Handa Island. The wait could have been an hour had we arrived five minutes later. After our short sea trip we landed on a sheltered beach on the south east of the island where we were met by a couple of members of the Scottish Wildlife Trust. They led us up the beach to a small hut where we were instructed on where to walk and the island and what type of birds we should expect to come across. These included Great Skua, Arctic Skua, Fulmar, Guillemot, Kittiwake, Wheatear and Oystercatcher. After our briefing we set off north west across the island towards Great Stack. As we passed the old village site (more on that later) and reached high ground we saw a couple a few yards in front of us being mobbed by large birds. They were not threatening too closely but swooping over the people as they passed a certain point. After they returned to roost and then flew again as Lil approached the same spot, swooping down on her as she passed. Then it was my turn. We never felt threatened, they were not the pecking kind but encountering them was a super experience. Soon we reached Great Stack and stayed for a long while to watch Fulmar's, Kittiwake's and Guillemot's making spectacular flight at the cliff face. Sometimes they rose from the cliff top to our eye level and glided past us effortlessly. It was brilliant and both Lil and I could have stayed for ages. Somehow we dragged ourselves away though to follow the path south east staying close to the cliffs which gave us widespread views across open sea at Geodh na Goibhre and Poll Ghlup. 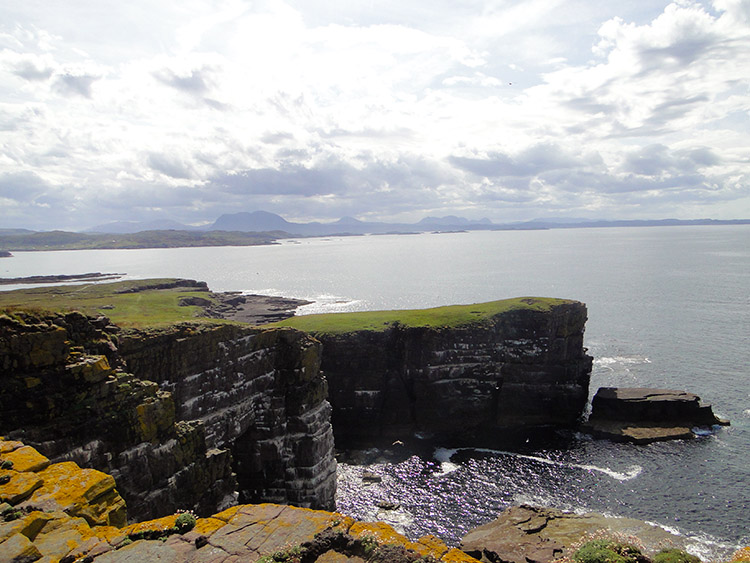 The views are fantastic all around Handa island 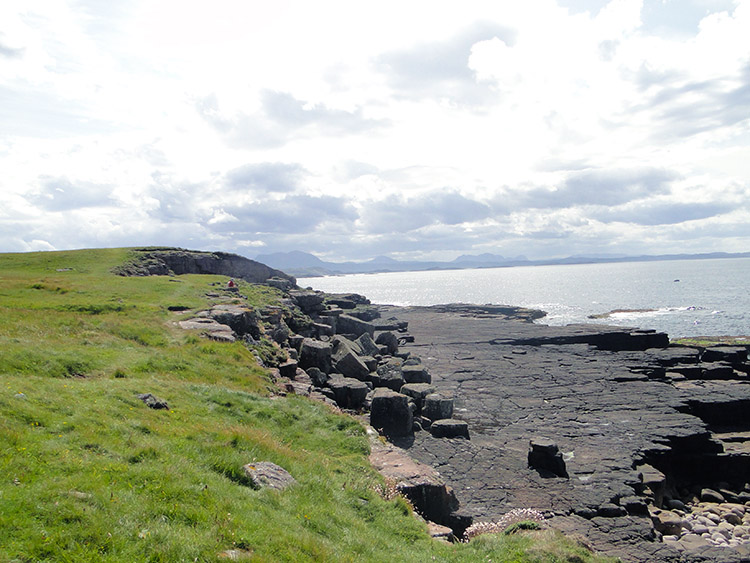 A rock table at Traigh Shourie

Continuing our walk around the island we reached Meall a'Bhodha, the most westerly point of the island and from there turned to walk south east to Traigh na h'Airgh and then east across the island to the village. Some of this stretch was a little boggy and board paths have been laid down to improve the crossing. On the boards Lizards dived out of the way from our approaching feet - a wise move. Soon we arrived at the site of the old village. Handa Island is uninhabited by humans now and left to the wildlife but this was not always the case. Up until 1847 sixty folk from eight different families lived on the island until they were forced off during the great potato famine. Walking amongst the foundations and low stones of their dwellings was an eerie experience. After the village we tracked back down to the guides hut and then to the beach where we waited patiently for the next boat to take us back to the mainland. As we did, we both reflected on a fabulous short walk on a lovely well kept island in the company of wonderful birds.