Summary: This is a walk submitted by Ken Brockway, a regular guest contributor whose walk reports are always a delight to read. This walk discovered by Ken in north west Scotland was found during a day touring in the region west of Fort William on the Ardnamurchan peninsular. It is a small gem of a walk that typifies the vastness of Scotland and the fact that a walk can be found almost anywhere in Scotland when north of Glasgow and Edinburgh.

The Walk: This was a spur of the moment walk. We were in Scotland primarily for a week's boating on the Caledonian canal and decided to extend the visit to journey on the spectacular West Highland Railway. It also gave me an opportunity to bag the last of the mainland peaks, Ben Nevis. On one of the fill in days we took a motor tour around the peninsula to the Southwest of Fort William which terminates at that Shipping Forecast icon, Ardnamurchan Point. For an English Midlander it's difficult to take in the extreme vastness of the place and the mile upon mile of single track road with no traffic. Earlier an evening drive had been an eye opener when we had forty miles of road to ourselves between Fort William and Mallaig, along the much improved A830.

I transgress, this should be about walking. There were numerous meandering dead end roads to the coast, to explore them all would have needed a week but one in particular caught my eye, that leading to Castle Tioram. I do enjoy trawling over a map to find locations that I consider look interesting, then I wonder after a disappointing visit, how to spot those special locations that don't have that appeal on paper? 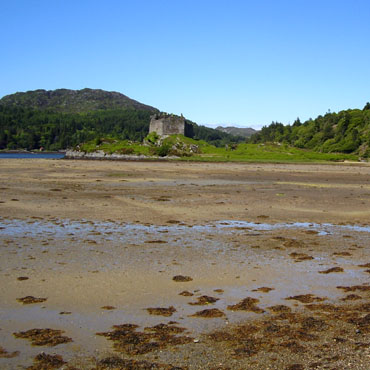 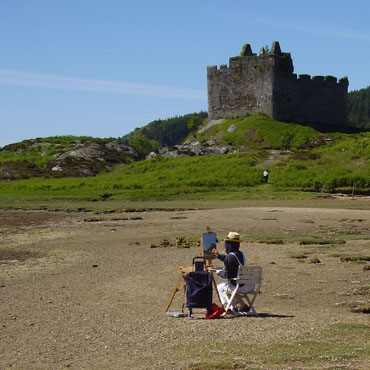 Artist at work near Castle Tioram

I wasn't disappointed this time, the ruined Castle Tioram (pronounced Cheerum) is situated on a rocky tidal island overlooking Loch Moidart, accessible only at low tide it's a dream location. An artist sat capturing the magic on canvas while I recorded the whole scene on camera. I'm not a regular visitor to Scotland so feel some trepidation when attempting to walk without the aid of Definitive paths. My 1.50:000 O.S. had some tracks marked which offered a walk of 3 to 4 miles taking in the south bank of sea Loch Moidart before climbing south to the tiny fresh water Loch Blain. 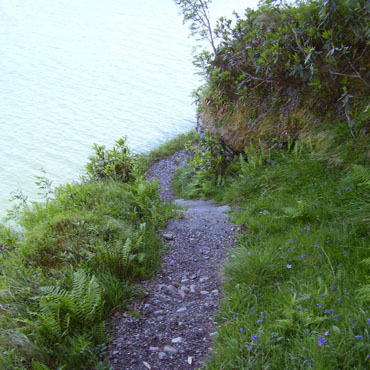 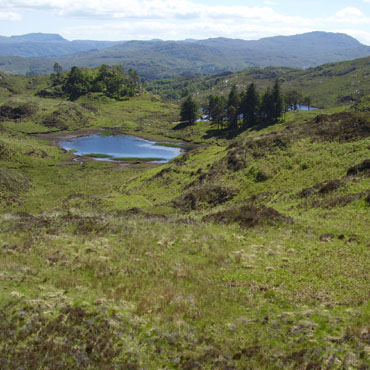 The view south towards Loch Blain

The map suggested that the shore path could have been in trees but no. It was a stunning, raised, narrow path which in places hugged the rock face. Streams came down the hill side and tumbled into the loch, adding charm to a path I could have followed for ever, anticipating what might appear around that next bend. I didn't have the GPS device with me so had a little difficulty locating where I needed to leave this well defined path and strike off inland. I got it wrong because after fighting through bracken up the valley I eventually located a well worn path which took me to to the summit of the walk. This gentle hill offered a wonderful view of the lochs which looked ideal for some wild swimming in the crystal clear water on this fine day. 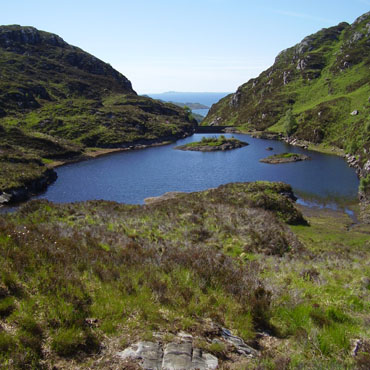 Looking west down the valley 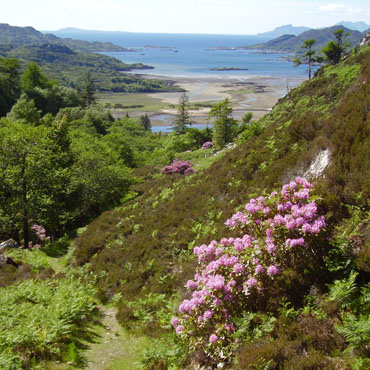 To the Sound of Eigg

From the bowl of Loch Blain a short climb took me into a narrow steep valley with a captivating Scottish view. The vista started with the steep descent, next over the lower reaches of the River Shiel, then continued through the South Channel and the Sound of Eigg towards the Outer Hebrides in the far distance. Some years ago a dam had been constructed, creating a small loch to provide a water supply. Now disused, the broken supply pipes accompanied the path down the steep valley to the road. Modern plastic tanks lower down the valley appeared to provided water storage now but I wondered how satisfactory these were in winter when the temperature dropped below freezing.