Summary: This walk is a short one but not without effort as there is almost 300 metres to climb, much of it being soon after the start on the path through the gorge of Glen Nevis. The walk heads upwards through the confines of the darkened narrow and wooded gorge towards the goal of the magnificent An Steall waterfall. The waterfall appears on arrival in the natural amphitheatre of the upper glen where viewing the falls and the surrounding highlands can be enjoyed in the splendour of the upland meadow, a refreshing change after passing through the narrow enclosure of the gorge. Relaxation can be had in the meadowland near the falls which is a popular area for picnics. Fun can be had too while attempting to master the skills of a rope bridge crossing of Water of Nevis. The return journey retraces steps taken through the gorge. Only this time it is easier passage, being downhill.

(Note while I class this walk with the rating of easy I am obliged to point out that care will be required at all times when travelling through the gorge and particularly when it is damp. The rocks on the gorge path are slippery. Also heed the warning sign seen at the start of the walk about the serious risks of falling from the path. In places it is a long way down)

The Walk: I was travelling down from Durness in the very far north-west of Scotland to Crianlarich and looking for a couple of short walks to fill my planned breaks during the driving journey throughout the day. Yesterday I had fulfilled my personal 60th birthday promise of climbing Suilven and as a result I was full of good spirits. For the first late morning walk why not this short one in the foothills of Ben Nevis? Sorted. After the free untrafficked driving from the north-west coast of Scotland to Invergarry I had crawled behind a very slow moving line of traffic along Loch Lochy to Spean Bridge and further on to Fort William. It had been frustrating. I was ready to walk. 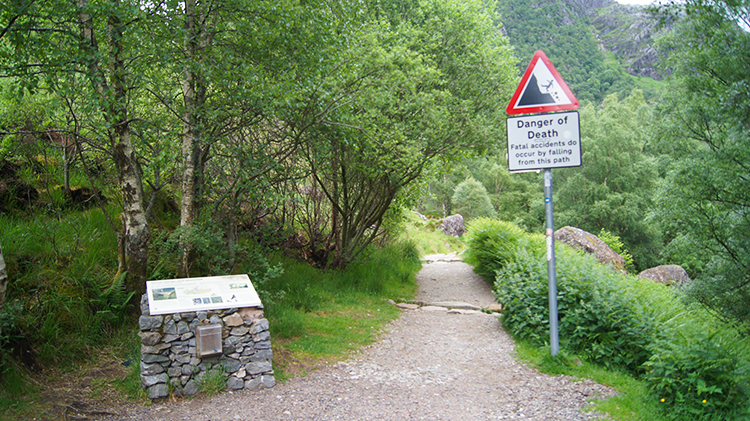 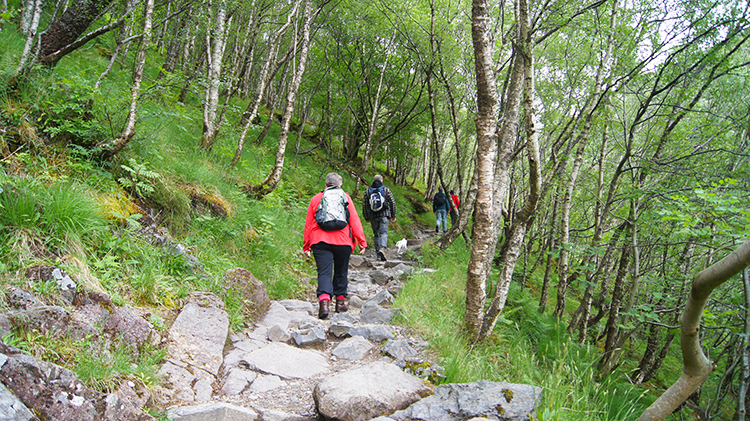 Climbing through the Glen Nevis gorge

The walk through the gorge carved out by the Water of Nevis is described in some literature as Himalayan in character. If so then it was possibly the closest taste of Himalaya I shall ever get. If only I could turn back time and determine a different career path? After bagging the last parking place available in the road end car park and as I set off walking I thought not of Himalayan comparisons but instead of how this was the closest I had yet been to the summit of Ben Nevis. The gorge is on the south side of the mountain. Look up to the rising left bank of the gorge as you set off and imagine walking a mile and a half uphill. It is perhaps impossible to do so but if you could you would reach the highest point of the British Isles. The summit of Ben Nevis is approximately one and a half miles due north of the car park. 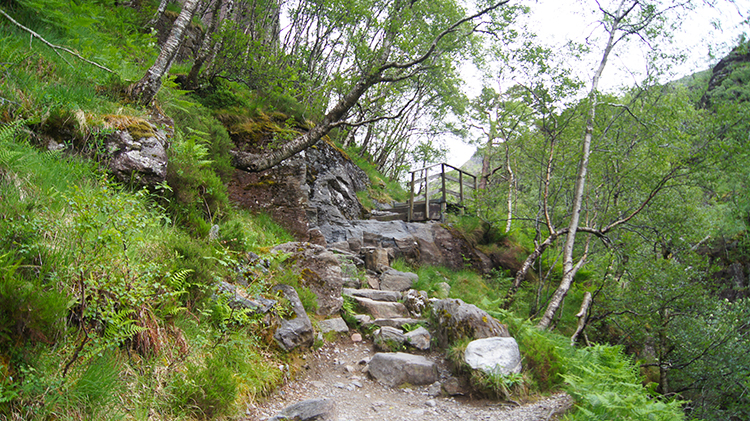 Ground falls steeply to the right on the ascent 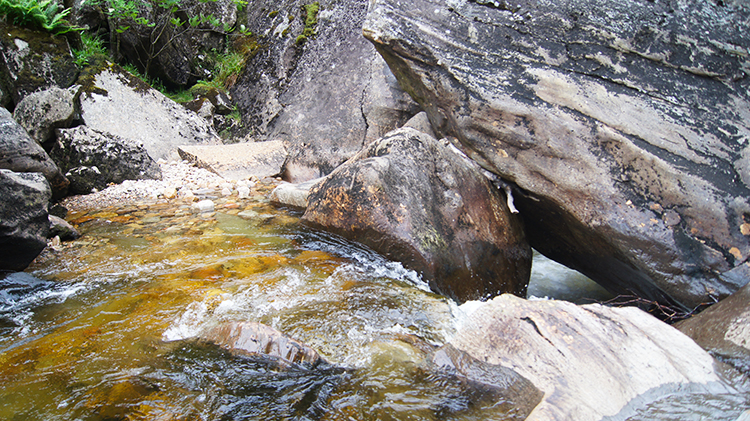 Water of Nevis thunders down into the gorge

The walk up the gorge is tough from the start and the first half mile particularly arduous with the walk to the crossing of Allt Garbh entailing 80 metres of ascent in 400 metres of travel. It equates to a 20% gradient. There were quite a few walkers easing their way along the path up the gorge. With my high energy levels of the last few days walking tanked I passed most; into my seventh decade and positively bounding along! The gorge is steeply wooded, trees rising high to the left and falling steeply into the chasm of the gorge on the right. At some points on the path trees are sparse which allow a clear view to the right, a view over the near tree tops to the north facing slopes of Sgurr a Mhaim on the Mamores range of mountains found south of Ben Nevis. They are an impressive sight. Sgurr a Mhaim may be little known in comparison to many other mountain but at 1099 metres high it is bigger than any mountain of England and Wales.

After crossing Allt Garbh the going got much easier and for the first time on the walk I could actually see Water of Nevis as it tumbled down the gorge. There were huge boulders in and around the river bed which most likely had crashed in to the gorge from the precipitous slopes of Ben Nevis to the left of the path. The same steep slopes edges up to the path forcing me around path-edge boulders. It is an impressive gorge, of that there is no doubt. 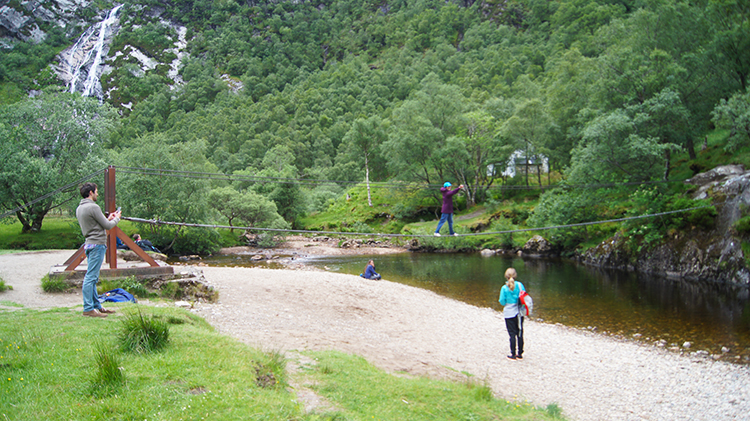 The gorge opened out in an instant. One moment I was within its confines and the next moment I was out in the fresh air of an upland plateau. Instantly Water of Nevis was tamed, a wide and light flowing pebbled stream in comparison to the ravaging beast it is within the narrow confines of the gorge. I could very easily have waded across Water of Nevis here and possibly kept my feet dry in the effort. A little further upstream, at a bend in Water of Nevis and central in the 200 metre high upland meadow the water was narrower and a little deeper. Here was a rope bridge across Water of Nevis where some young folk were mastering their rope bridge crossing skills. I watched for a while as two youngsters successfully negotiated it. I think Grandma went next. To her credit she succeeded in the crossing without much difficulty too. 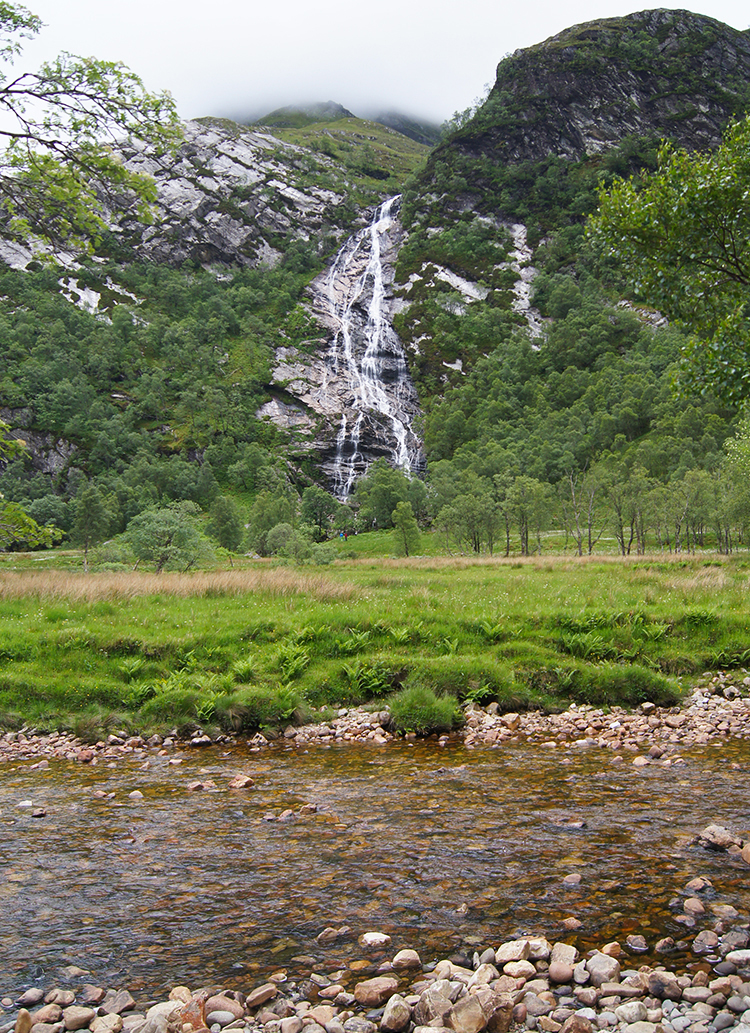 View across Water of Nevis to Steall Falls 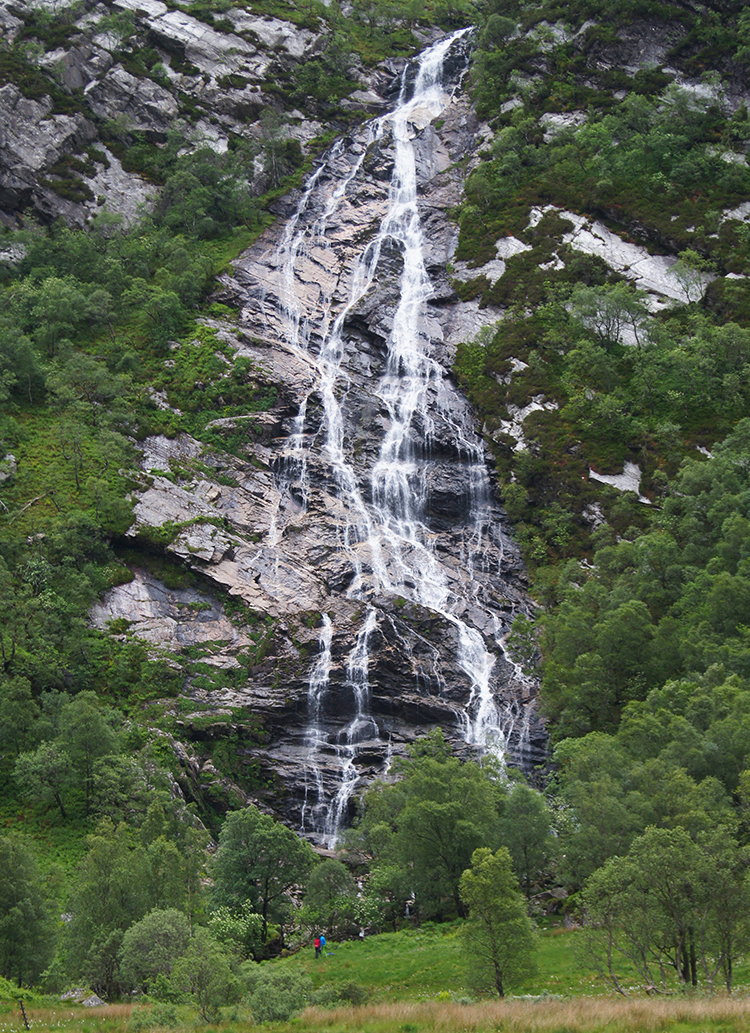 I did not bother crossing the Rope Bridge, not wanting to interrupt the fun of those already there. Nor did I want to queue. I chose against wading across Water of Nevis as well, preferring to take my vantage point to the impressive sight of Steall Falls from the north side of Water of Nevis. I was amongst quite a few others as I did so though while I was stood admiring the view some of my fellow observers were sat on natural rock seats near to the path we had followed through the gorge and enjoying their lunches. It was a gorgeous spot to do so. I recommend it. The waterfall is also known as An Steall Bàn "The White Spout" or Steall Waterfall. It is Scotland's second highest waterfall with a single drop of 120 metres and well worth the effort of climbing through the gorge to sit and observe it. I enjoyed my time looking upon it. Very impressive. 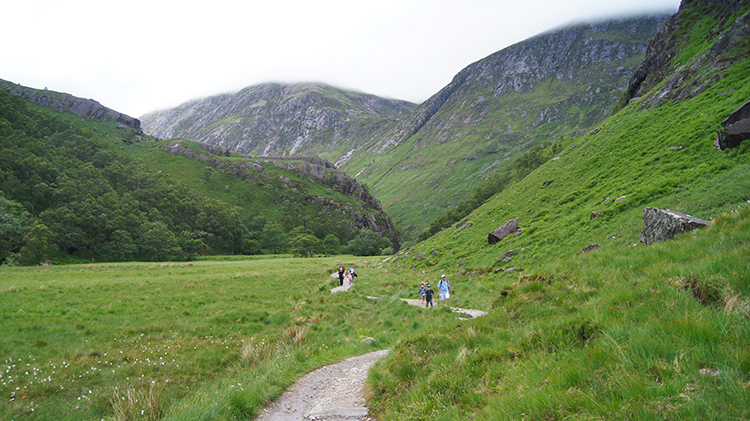 The upland meadow near Steall Falls 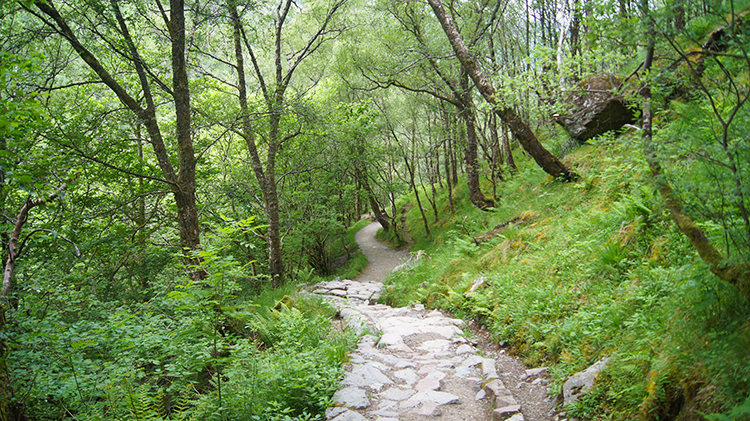 Heading back down the gorge

Groups of people including mature couples and family parties kept emerging from the gorge and walking near to my vantage point looking over Water of Nevis to the waterfall. It was a popular spot. After about ten minutes I gave up my admiring stare and set off back down the gorge. I had another walk to do. Still I had time to dip down from the path at a safe spot on the early descent to clamber onto the boulders in Water of Nevis and admire the arrival of water into the chasm. It was a thrill. Then I clambered back up to the path and walked on down as hastily as I could while being safe at the same time. I had another walk to do on my way to Crianlarich. Now this beauty was safely banked.