Summary: This walk from the hamlet of Croesor is to one of Snowdonia's more remote mountains which is a shame but a blessing if you are looking for isolation from the crowds. Moelwyn Mawr is impressive, having a wonderful ridge at the summit which provides a lovely walk along it's length. There are excellent views throughout to the Vale of Ffestiniog in the south, to the coastline of North Wales in the west and to the Snowdonia giants in the north. 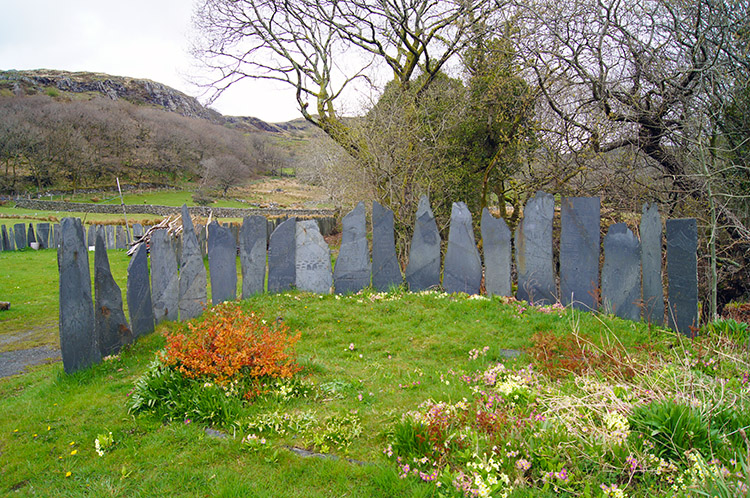 Local slate art near the car park in Croesor 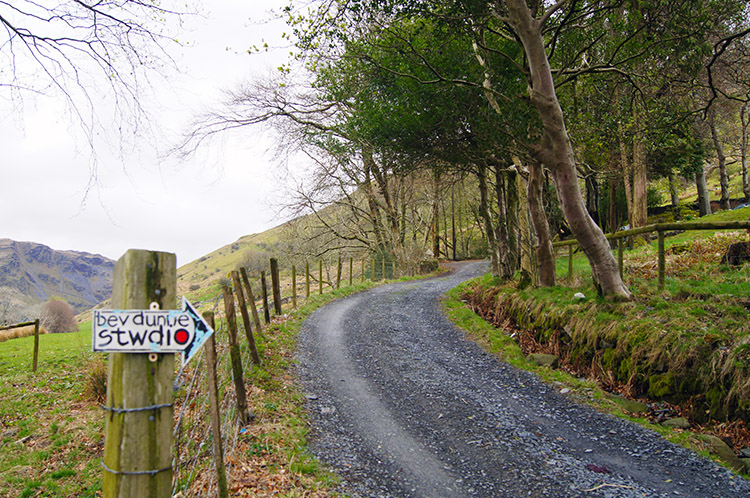 The way to Bev Dunne Studio

I began my walk from the hamlet of Croesor, a Welsh speaking village, where the language is used every day. Nobody used it while I parked the car, donned my walking gear and set off. I never saw another soul which was to be the case throughout the walk. There were a few more cars in the car park in Croesor when I arrived but their occupants had already left, probably on a walk up Cnicht, also known as the Welsh Matterhorn. Cnicht is the mountain directly to the north of Cwm Croesor. I would look over to it as I climbed Moelwyn Mawr, on the south side of the valley. From Croesor, I crossed the river and at a road junction turned left to follow the road up the valley. This road did not last long, petering out from tarmac to gravel track in just a few steps. There is no road through the valley, just vehicular tracks to the farms further up and to the disused quarries scattered all around the place. I steadily climbed from the valley up one of these tracks and according to a sign pinned to a fence post towards Bev Dunne Studio. Soon after on following the track up the mountainside passed Y Bryn. Bev did not appear to be in. 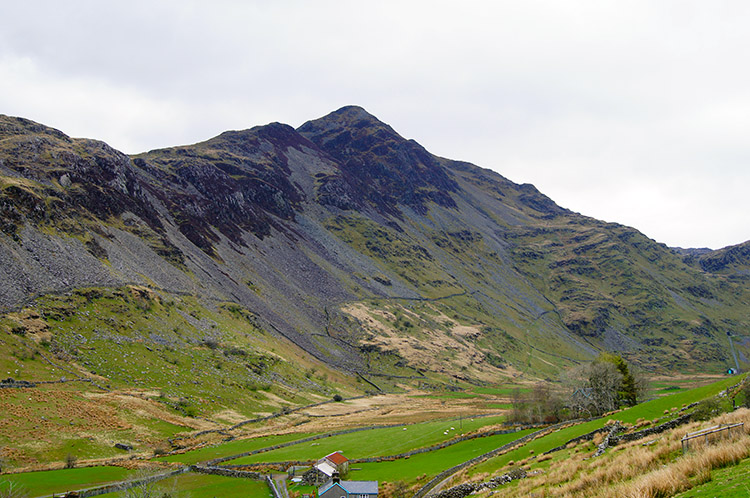 Cnicht as seen from Moelwyn Bank 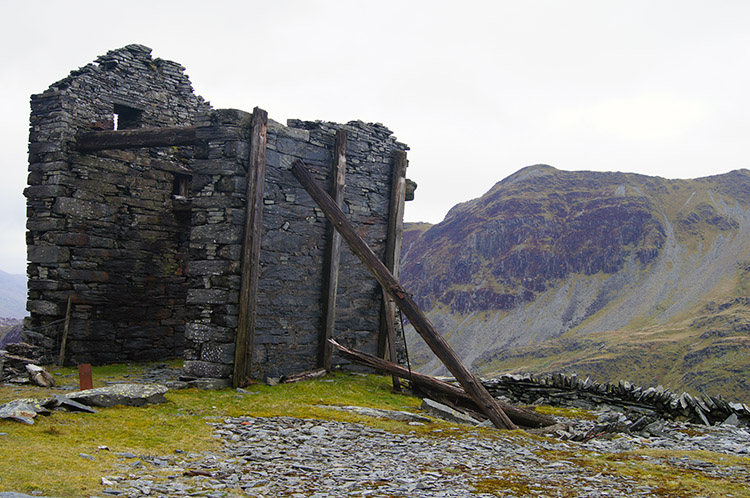 The climb was on a steady gradient up the track. As I increased my height the views down to the valley showed it to have a narrow strip of lush green grass beside the farmsteads which managed the narrow line of fertile land. They were directly below the course grass fields clinging to the lower slopes of Cnicht. Further up scree slopes of crumbling slate stripped the mountainside bare. I continued my climb up and up past the 200 metre, 300 metre and 400 metre levels. Then I came to an altitude of 500 metres directly on the site of a disused quarry. Croesor Quarry was once a large underground slate mine in north Wales which was served by Croesor Tramway. I had just walked up the track of that old tramway, a very convenient access track to the 500 metre level of Moelwyn Mawr. At the site of the disused quarry the feeling of desolation which is symptomatic of all such sites in the wild places was evident. I am sure there were good days but many must have been harsh for the workers up here. I could sense the graft; I could sense the austerity which forced it upon those who toiled. 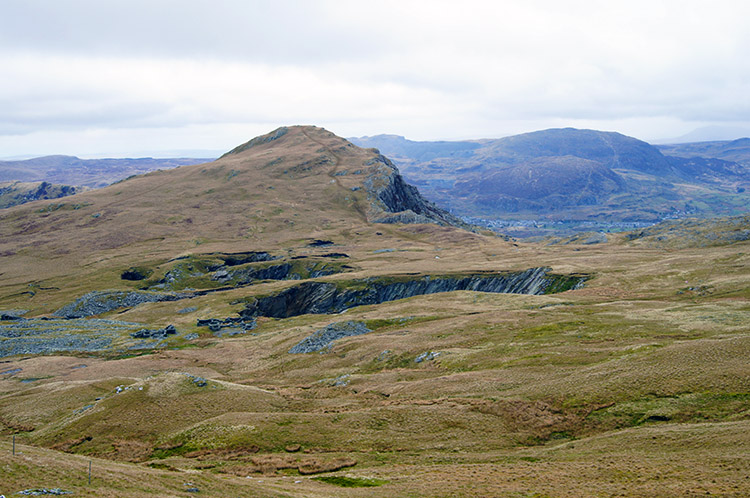 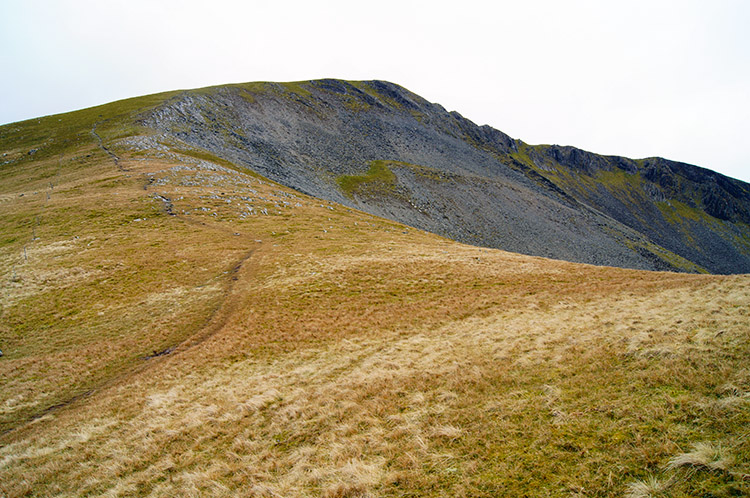 The enticing climb to Moelwyn Mawr

I suspect the slate miners did not often climb above the 500 metre level of the mine workings. The tramway certainly did not travel any further. I searched around a while for a path leading up beyond the level. I could not find it at first but a little meandering led me to one used by others before me. After a initial heave up a closed in section of the mountain between 500 metres and 550 metres the path temporarily levelled and the views opened out. I felt a tremendous rush of exhilaration looking over the scene surrounding me. To my left, over a wonderful undulating plain of upland was the impressive looking mountain of Foel Ddu which, as I walked further, exposed a stunning east facing cliff. Directly ahead was the path leading up to the summit of Moelwyn Mawr, a lovely approach first over a lush upland pasture and then skirting the east edge of the mountains scree slopes. Above the scree was the ridge I was looking forward to traversing. 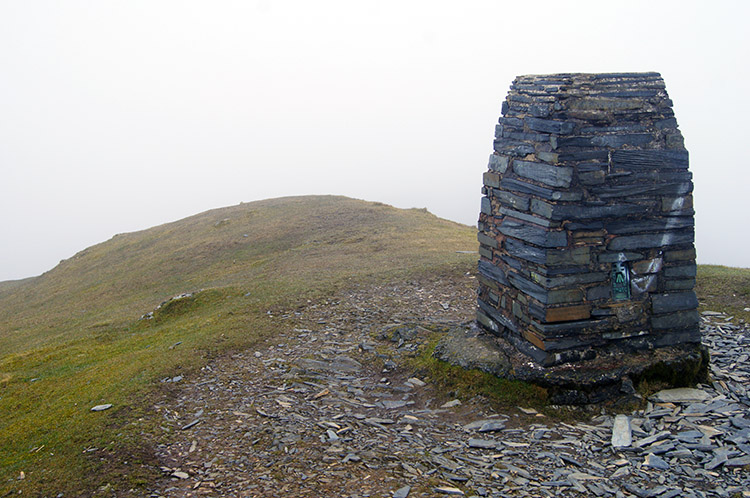 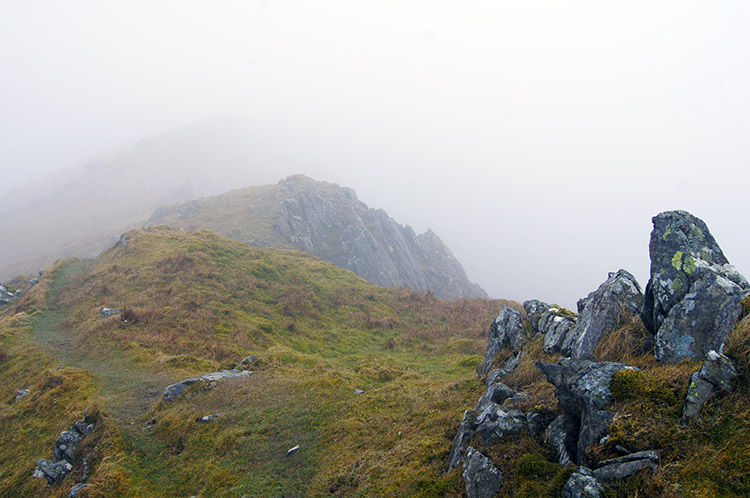 The ridge of Moelwyn Mawr

I followed the path up to the summit of Moelwyn Mawr as quickly as I could. This was because I could see a bank of cloud approaching from the east. It was around the 700 metre level at its base so I knew it would envelop the summit ridge. If only I could fly. With no avian ability, that talent being beyond me, I fought the good race against the cloud bank but lost. It beat me to the top and closed the distance viewpoints shut. Having reached the impressive local slate summit pillar I stood and caught my breath while feeling a little disappointment. But fate dealt me a kind hand. Though the cloud bank covered the ridge on top of the mountain it scuttled across at a decent pace and provided me with enough windows of opportunity to see out across the ridge. With the opening provided, I walked across the ridge from east to west. 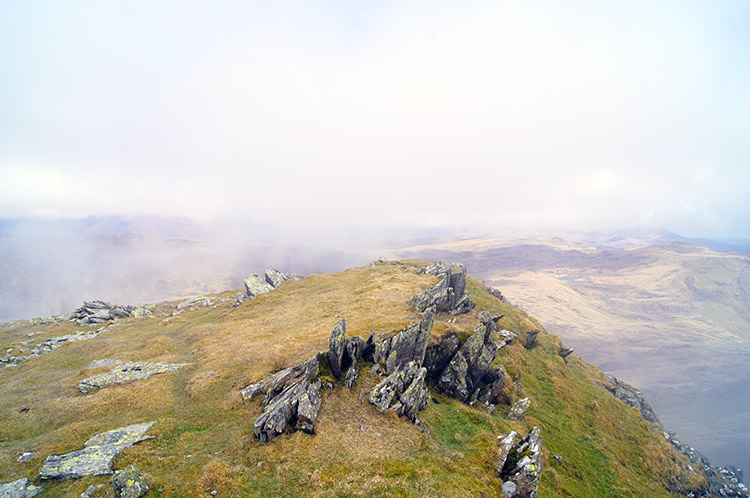 On the western edge of Moelwyn Mawr summit ridge 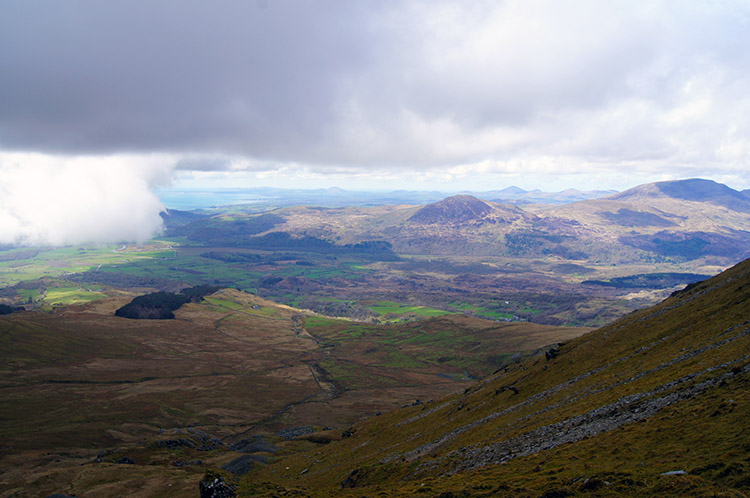 Looking down to my way back

It was a lovely ridge to be on and to play on as I hopped and skipped across my high place which I had completely to myself. The ridge was interesting throughout its length with patches of grass interspersed with areas of rockslate, some flattened by footfall and others standing jagged and proudly pointing up in a north facing angle to the sky.

Not knowing it at the time I was in a Site of Special Scientific Interest (SSSI). Moelwyn Mawr SSSI is a Pleistocene/ Quaternary land form assemblage comprising two components. First it has patterned ground, consisting of small-scale vegetated stripes on the north-eastern flank which I had just crossed to reach the summit ridge and secondly the scree slope on the right is a debris tongue, possibly representing a fossil rock glacier, extending downslope out of the cirque beneath the summit of Moelwyn Mawr and into the Croesor Valley. Now I know this I feel privileged to have been in a place of such historical value. 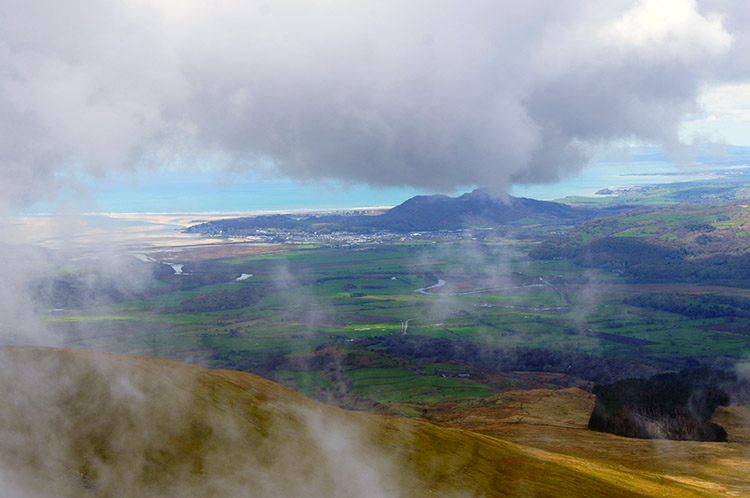 Cloud cleared the mountain top once I descended 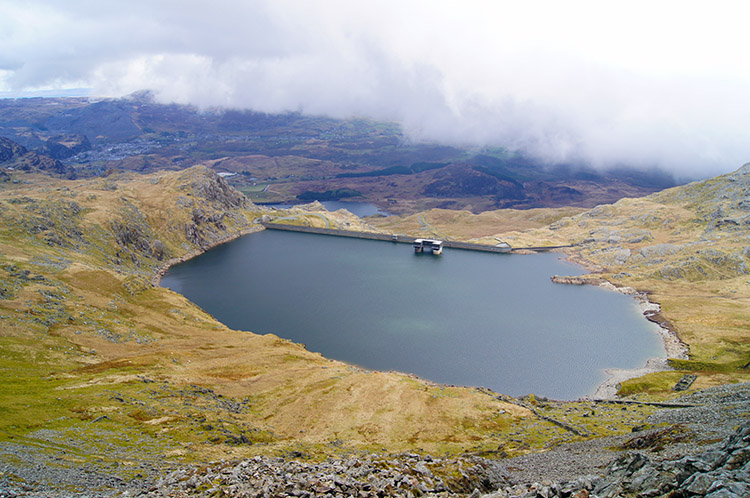 I did not want to retreat from the ridge in a hurry but after my full length walk of it from east to west and back again which I did with plenty of interruptions to enjoy the moment I regained the path near to the pillar which led me down the south side of the mountain by the Craigysgafn path. It was steep at times, meandering around rock bluffs so I took it steadily. At some points on the path during my descent I could see Llyn Stwlan to my left. Then rounding a rock bluff would dismiss the view. I made my way down towards Bwlch Stwlan. Across from the gap was Moelwyn Bach with its really impressive rock overhang just below the summit. 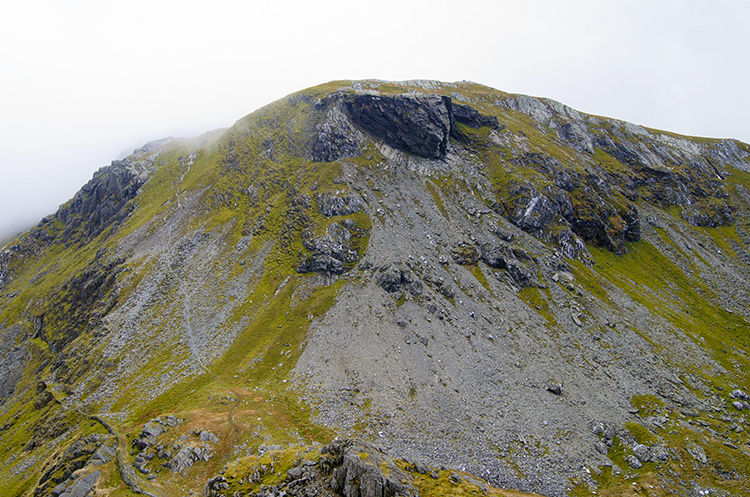 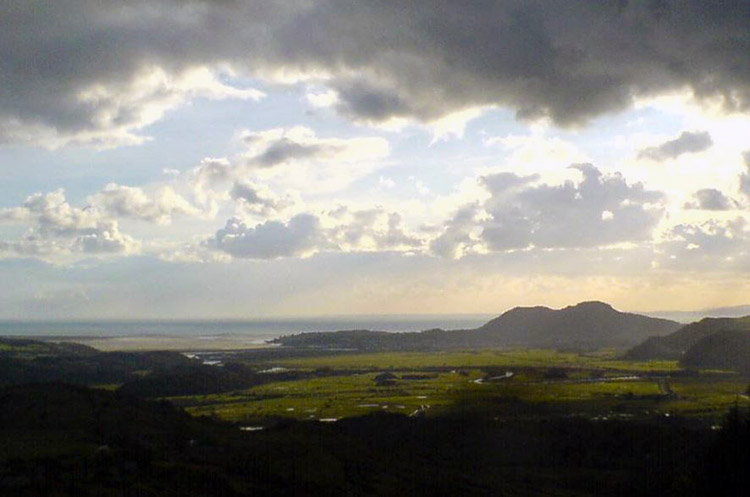 View to the coast from the road back to Croesor

A few more careful steps down the meandering rocky path and reached Bwlch Stwlan. I looked across once more to Moelwyn Bach and was tempted to climb it. It would not have taken much but I had commitments for later in the day. If you have not then go for it. For me, I followed the path between the Moelwyn's leading west. The path took me gently down a valley which feeds Afon Maesgwm, at a slight less steep gradient to the tramway access I had taken to climb to Croesor Quarry. As midday came and went so did the clouds. A sunny afternoon and evening ensued, the clouds melting almost unconsciously as I walked. There was little sound in the valley, even the birds were quiet, perhaps taking a day off. It was heavenly. After a mile and a half of walking I came to a road which by turning right onto, took me back down to Croesor. I followed the road for almost a mile and never met a single car on it. Arriving back at the car park I looked up towards Moelwyn Mawr and thought "Thank you for such a special day. I was pleased to make your acquaintance, you are a lovely mountain". Keep it quiet...