Summary: Unusually for my walks in the North York Moors National Park this one starts at almost the highest point and descends through woods and across fields for the first half from the small village of Old Byland to reach Rievaulx Abbey in the heart of Ryedale before climbing throughout the second half, again through woods and along a delightful path upland of Caydale. The climbing is never arduous though from reaching a road near Caydale Mill the way back to Old Byland includes one short steep hill to negotiate. Altogether the walk is a pleasant day out and unlike the majority of my North York Moors walks it is full of verdant green, Almost entirely. 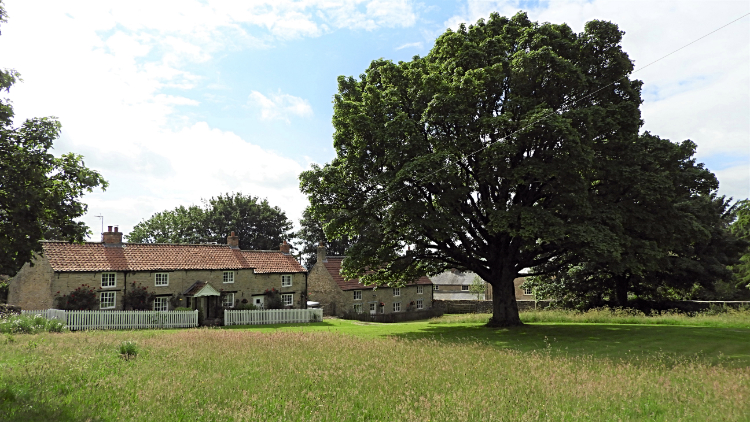 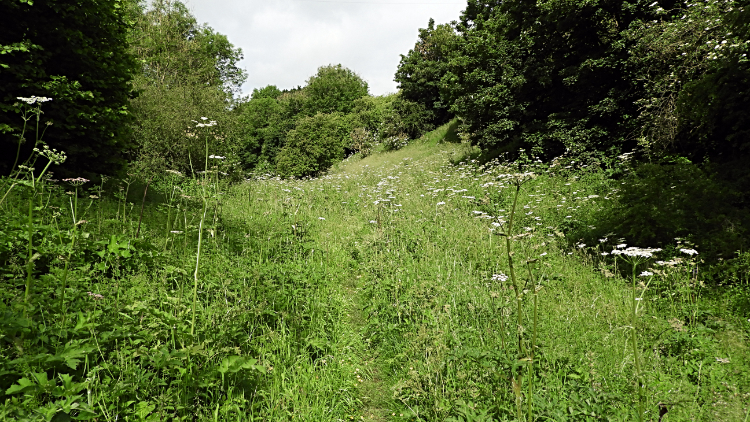 The path through Hill Gill

The sun was shining on me as I emerged from my car in a convenient parking area at the top end of Old Byland. It was 23rd June, just past the longest day of the year and though it was just past eight thirty in the morning the sun was already climbing high into the sky. Some clouds were crossing from south-west to north-east in the dominant blue sky but the forecast was for frequent sunny spells. Which pleased me. As I set off on my walk through the village of a few farms and around twenty cottages and which is blessed with a large village green a jobbing garden services chap took a large mower from his van to cut one of the cottages sloped roadside patch of grass. Perhaps he had a few customers in the village to serve today. Apart from the mower man the village was very still. Just me and the local birds about their morning business. After walking down the road through the village I turned left and made an about turn to head down a narrow unmade path into Hill Gill which was a beautiful mess of high uncut grasses and wild plants. Thick fern and masses of flowering Cow Parsley kept me on the narrow line of the path which led from the bowl of Hell Gill up to the woodland shielding either side of Low Gill. 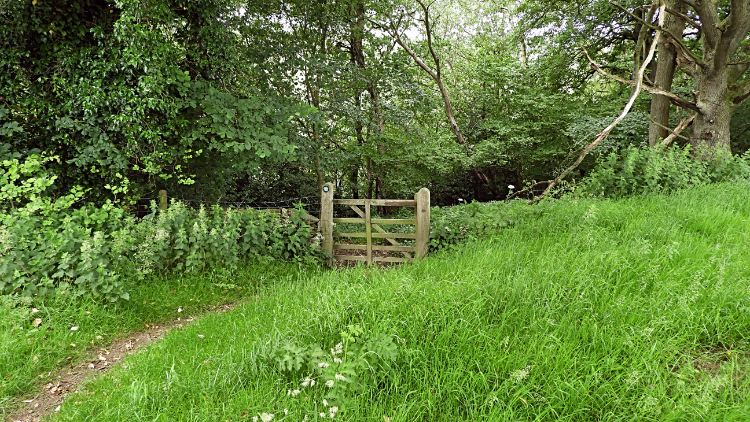 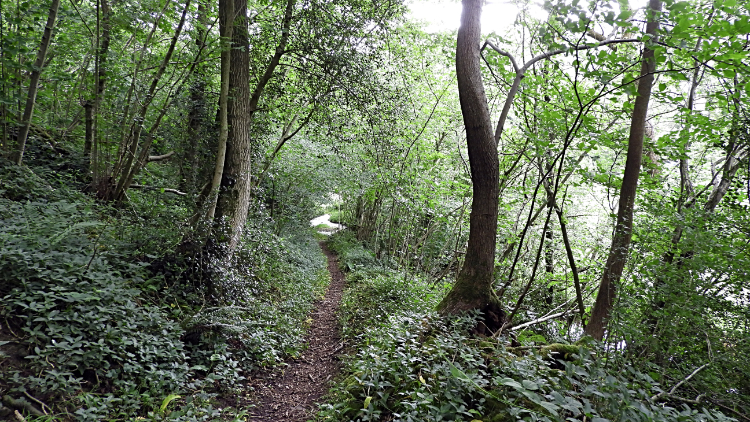 The path through Callister Wood

A couple of hundred metres later I turned right, out of the wood and into light to follow a path on the east edge of a series of fields, a mix of grass pasture and grain, leading due south towards Callister Wood. The first field of pasture had a large pile of felled trees within it. The leading trunks of the trees were massive. They will have been mighty fine trees when standing. Continuing on from the fallen giants, the only significant descent of the walk started as soon as I had left the wide open of the fields and passed through a gate to enter the darker confines of Callister Wood. The short walk on a good path through the wood leading me on a decline of sixty metres to Nettle Dale. 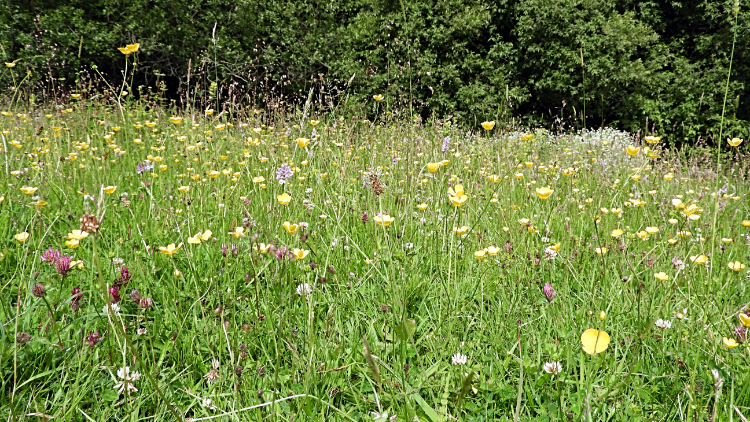 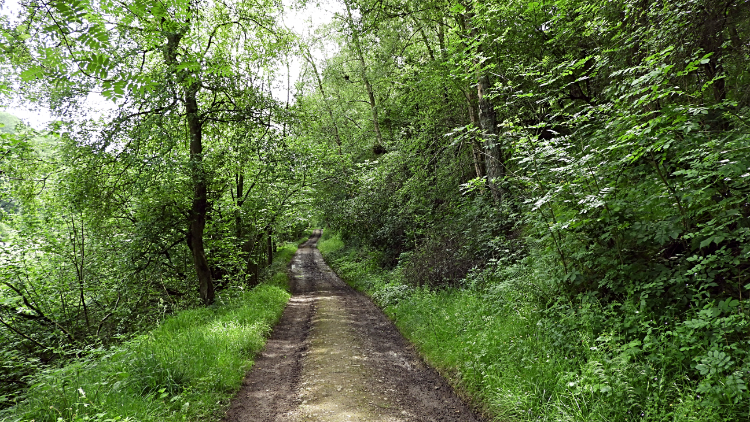 The bridleway through Nettle Dale

My first impression of Nettle Dale was "How gorgeous you are". I had arrived at a point in the dale where several paths meet, the Cleveland Way National Trail being one. A four stepped stone bridge led over Nettledale Beck and all around there were spectacular wildflowers in an array of colours. It was so beautiful. I stayed for five minutes near the step bridge at the point of the joining paths, unable to draw myself away from the lovely scene. Eventually I made my leave though to follow the Cleveland Way eastwards and past a series of ponds, thought to be former fishponds for the monks of Rievaulx. Industrial machines were dredging the west side ponds on this day I was walking through. A chap was fishing the east-most pond. 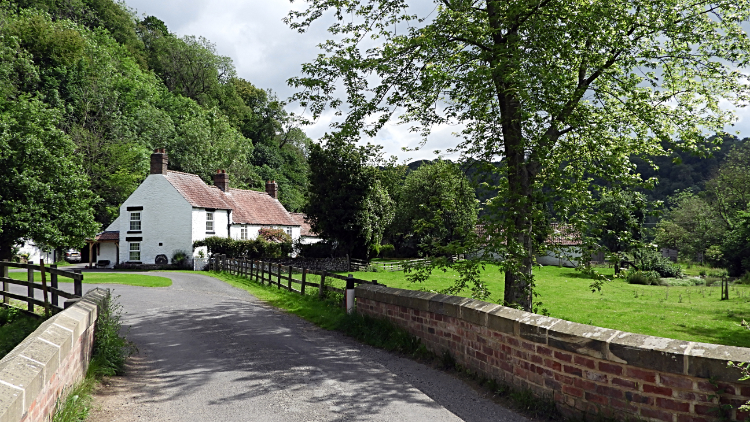 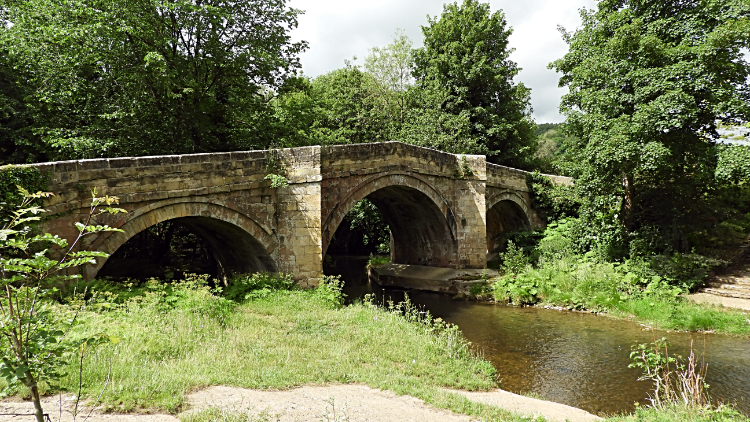 From Nettle Dale I reached the road leading from the village of Scawton to Rievaulx and followed for one whole kilometre to Rievaulx Bridge. In doing so I passed Hagg Hall, a large house with what seemed to be adjoining stables and soon after I arrived at pretty Ashberry Farm which is approached by way of a good stone bridge which leads over Nettledale Beck on its final course towards its joining with the River Rye. There is a large open green area at Ashberry Farm too. I found it an idyllic spot. Three hundred metres later I arrived at impressive Rievaulx Bridge. As with many old and imposing bridges the the segmental arched bridge built of limestone is a Grade II listed building. It is best viewed from the east side of the River Rye a few steps on the road towards the village of Rievaulx. A convenient open bank above the river provides the perfect vantage point and one I enjoyed for a couple of minutes. 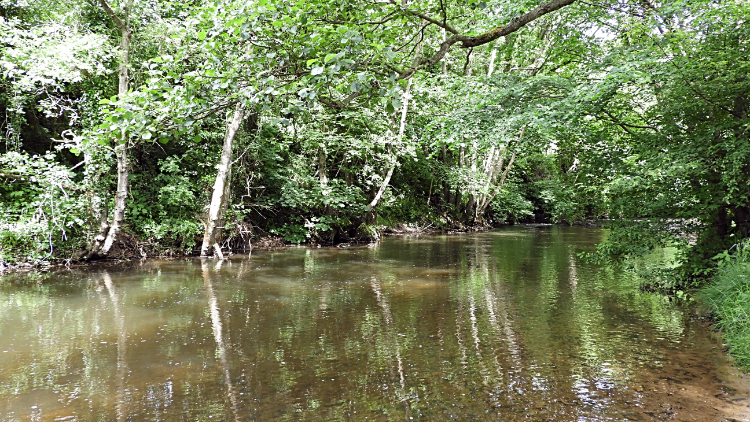 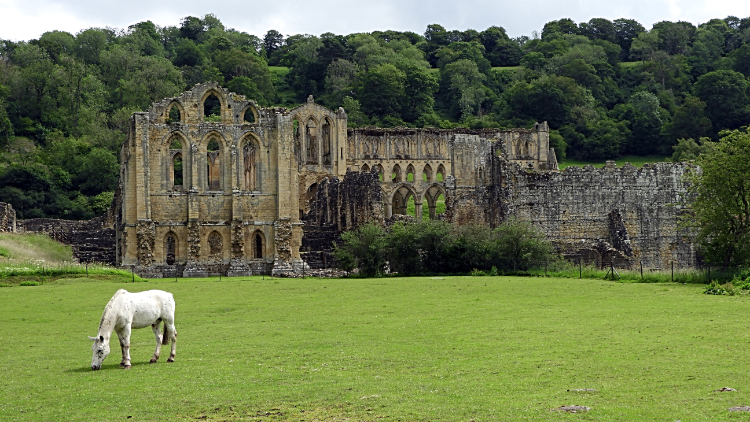 Resuming the walk from Rievaulx Bridge I followed the road towards the village of Rievaulx, now drawn by the sight of the abbey on my right. However, I was also enticed by the river flowing on my left and just after passing the village arrival sign I dropped down the east bank to sit and watch the river flow while in the cover from sunshine within the tree canopy. Perhaps I would see a Kingfisher fly along the river or see a fish jump for an insect hovering just above the waterline. No such luck but it was a pleasant five minutes just the same. Then after clambering back up the bank I continued my walk into the village, passing the silent abbey, robbed of visitors by a nasty pandemic this particular year. A handsome white horse grazed in the in pasture field by Rievaulx Abbey, making a very pretty picture. I continued on a short climb through the village, past first a cottage with a thatched roof and then the village church before turning left at a bend in the road to follow a bridleway north-west towards Air Bank Wood. 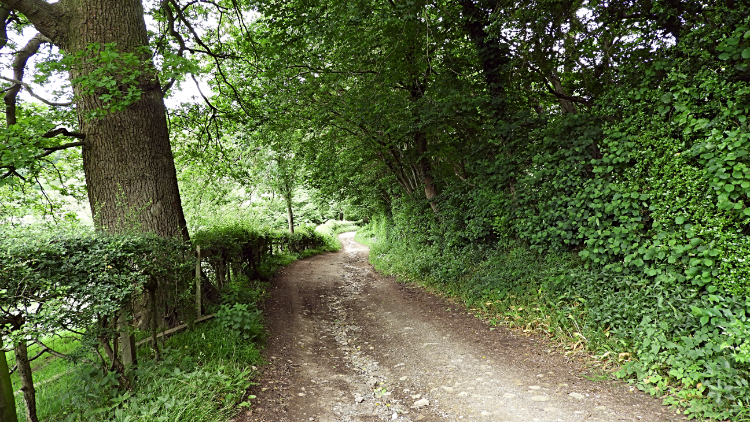 The path from Rievaulx through Air Bank Wood 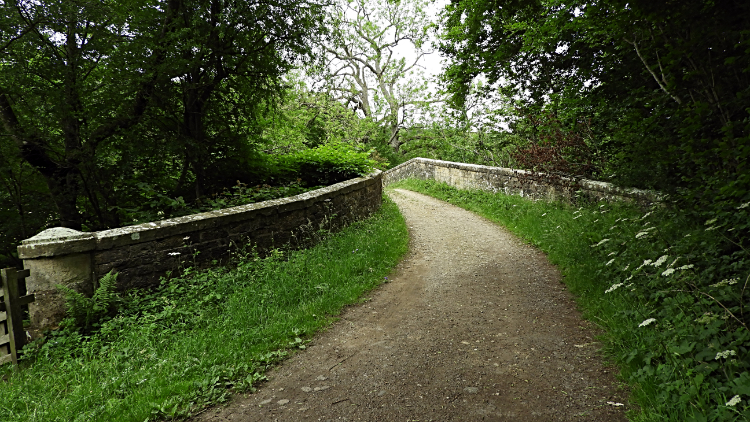 I first passed some farm buildings on my left before entering the covered bridleway leading through Air Bank Wood. Within the wood I topped off a short twenty five metre climb which had led me up through the village and towards the west end of the woods I began a descent. It had been so peaceful walking through the woodland, the day so calm and still that not a breath of wind rustled the trees. Some birdsong here and there, not as much as the spring chorus. nothing else. And then, all of a sudden there it was. First I sensed a low rumbling which grew louder very quickly. And then much louder. Almost deafening. I twigged what it was and still I had fifty metres or so of walking to reach the end of the woodland. I ran as fast as I could as the noise reached a crescendo. Out of the woods I had missed the first one which had passed and was beyond Rievaulx Abbey which I could now see as I turned my head down to my left. But there was a second one and it was roaring past me, right in my eye line. What an awesome sight it was. I stood in awe, dumbstruck and immediately intoxicated by the sight. It followed the first, flying straight toward Rievaulx Abbey before rising sharply while banking to the right. Soon they were gone, noise abating as quickly as it had risen. Out of sight by following the curve of Ryedale past Rievaulx Bridge and northwards toward Bilsdale. I had just had awesome close sight of two Eurofighter Typhoon fighter jets. My word, they were a spectacular sight. In my trance I had no time to take a picture, my eyes just fixed on the majesty of their low flight through Ryedale. Gosh, they were thrilling to witness flying on a low line following the contours of the Ryedale valley. WOW. So what did I see up close, here is the first. And here is the second, as I could see the delta wing arsenal quite clearly on the second aircraft as it turned from the abbey and banked away out of view. I was still reeling and coming down from the excitement as I descended the twenty five metres back down from Air Bank Wood to meet the River Rye at Bow Bridge. 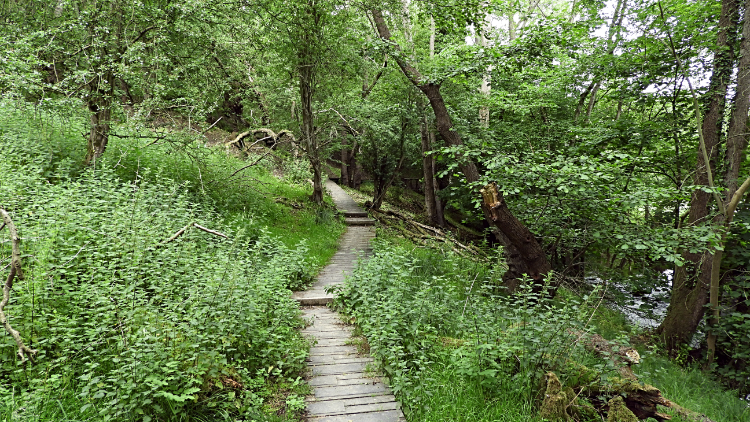 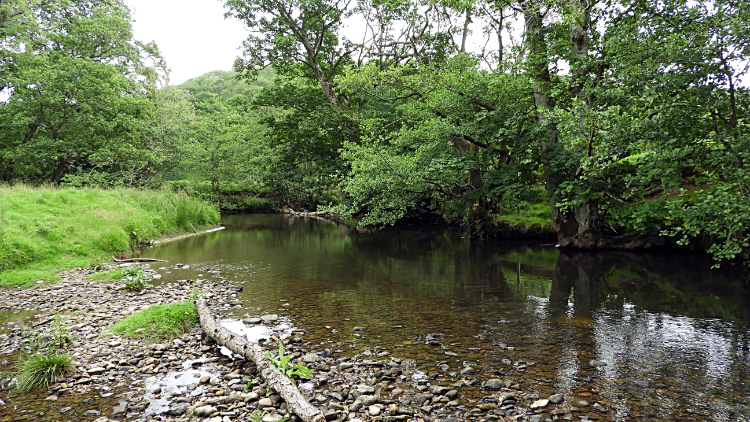 From Bow Bridge the walk continued by following the river upstream on a course northwards. The river meandered, the path keeping straight, meeting and leaving the river now and again. Following the path which was signposted to Hawnby, I crossed a field and then entered a riverside copse which was traversed by way of an above ground boardwalk. It must be a wet spot in winter just here. Just beyond the copse and clear of the boardwalk I came into another field where the river was placid with a shingle bank on my side. I decided it was the perfect place for lunch. Though it was just eleven thirty in the morning I had being going three hours on a hot summer day and while I had not been rushing it seemed just right to stop right here. After my lunch I walked down on to the shingle and paddled into the water, just far enough not to overflow my boots. It was cooling. It was nice. And it was perfect preparation for the climbing which was now beginning and which would continue right on until the end of the walk. Just 130 metres of it but every metre would be a sweat in the stifling heat of this midday. 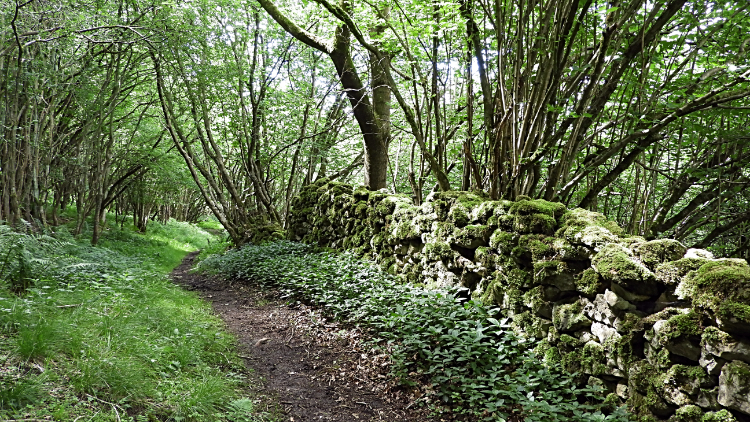 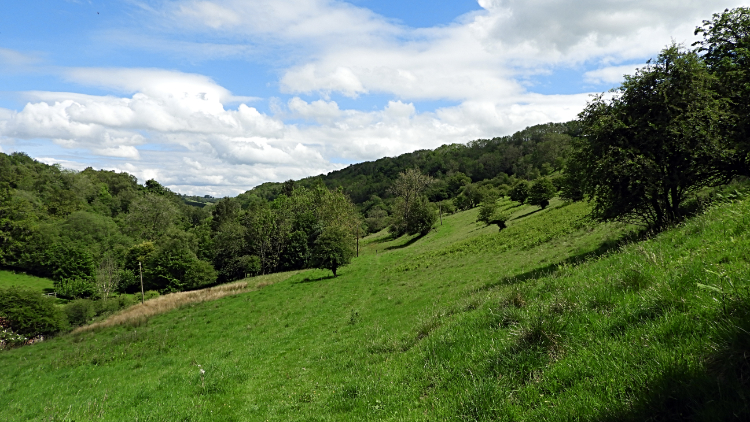 Up and up I went, climbing from Ryedale and after the field of lunch on a farm access bridleway to an intersection between Tylas Farm and Tylas Barn. A line of Swallows on a telegraph wire kept watching me, flitting along the wire as I walked on below. Beyond the crossroads of paths where turning left and passing Tylas Barn would have taken me back to Old Byland, I headed into the thick of woodland. Deep Gill Wood was excellent company for the time being. At times by turning my head to the right I could see right over the thick verdant green to the north side of the narrow deep valley I was following from east to west. In the thick of the wood, clearly worked with much pollarding, the glints of sunshine breaking through were magic kaleidoscopic sights. A section of the woodland walk had a handsome moss covered drystone wall leading me along on my right. And then all of a sudden I was out, into the light and following a path half way up the valley bank leading to the road just south of Caydale Mill. At the road it was a simple case of following it back into Old Byland. However, the steepest climb of the day was up that road. Oh well, it had to be done.