Glencoe and the Pap of Glencoe (Sgurr na Cìche)

Summary: A straightforward up and back down walk to the top of the distinctive breast shaped peak of Pap of Glencoe. The mountain which rises to 742 metres above sea level is an unmissable and unmistakable landmark in the area around Ballachulish at the bottom of the Glen Coe pass and near to the village of Glencoe where the walk begins. The climb of Pap of Glencoe is a popular one which involves a constant climb on the approach to the Pap and then a final steep and sometimes easy scrambling adventure on the white-grey quartzite breast. The reward for the hard work is well worth it as the views from the summit are absolutely stunning.

The Walk: I was travelling from Glen Nevis to Crianlarich and having just crossed Ballachulish Bridge I was driving east on the A82 when I saw it. And once I had seen it I could not take my eyes off it. So much so I pulled in from the road into a lay-by and got out my maps and the walking books I had taken with me to Scotland. I found the mountain on the map and identified it correctly. I found a walk in one of the books leading up from the village of Glencoe to the mountain. And there and then I chose to climb it straight away. During the day I had already travelled all the way from Torridon to Fort William and walked to Steall Falls from Glen Nevis before driving to this point. Still, it was only 2.00pm in the afternoon. If I got to Crianlarich in the dark of late evening so be it. I just had to do it. So I drove a little further along the A82 to Glencoe and left the main road to park in village car park. Ten minutes later I was on my way to summit the Pap of Glencoe. 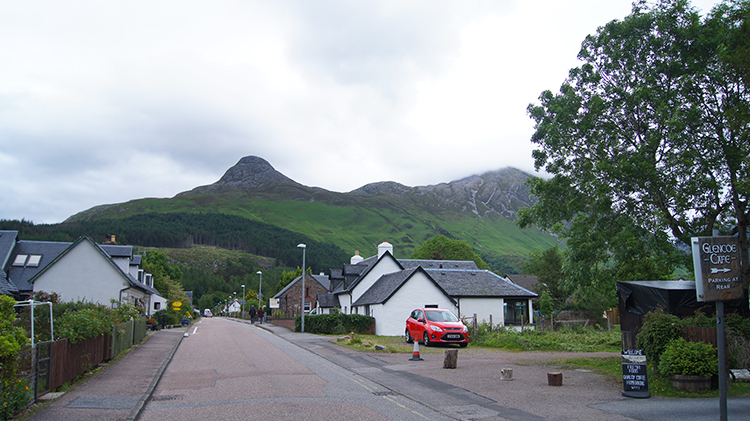 View to the Pap from Glencoe village 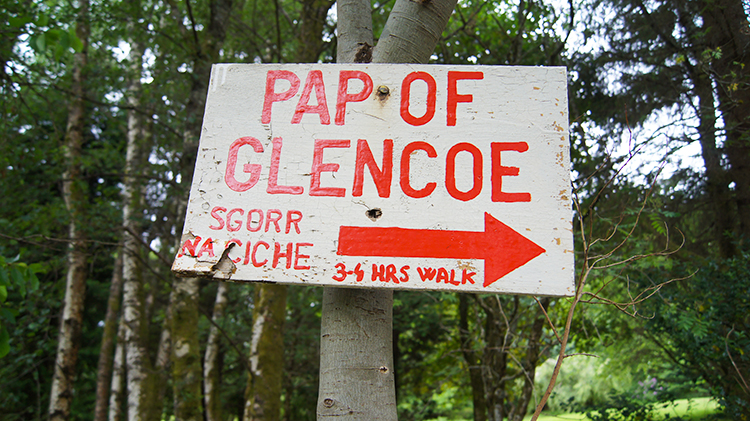 You cannot miss where to leave the roadside

Glencoe is a small and very pretty village. I enjoyed my walk from the car park and up the main street which effectively began my walk. As I walked up the one and only street in Glencoe I turned my head from left to right constantly, just like a tennis match spectator. There were plenty of lovely buildings to admire, some to my left and to my right. And there was the Pap of Glencoe, incessantly drawing me towards it straight ahead. On the street I admired the lovely small Episcopal Church which also serves as Glencoe Outdoor Centre. I passed some lovely small whitewashed crofts too, most showing admirable flower displays in their frontages and some such as Glencoe and North Leven Folk Museum displaying traditional tools and household wares at the fronts such as old stock pulled ploughs and washing mangle wringers. I remembered my grandmother having a mangle wringer like the one on show. Once past the village the road turned to the right and I followed it for a half mile while walking briskly. It was tree lined and I could hear the waters of the River Coe flowing in a narrow woodland glade to my right. I saved that for later; I wanted to get on and start the climb. A rough sign pointed the way. It said I should expect a 3-4 hrs walk. 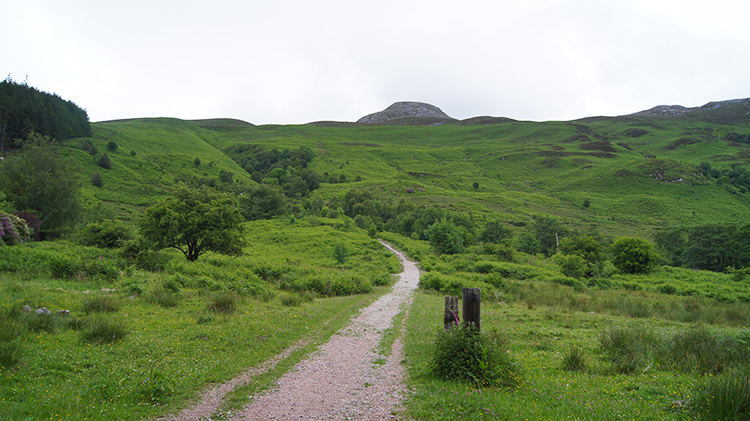 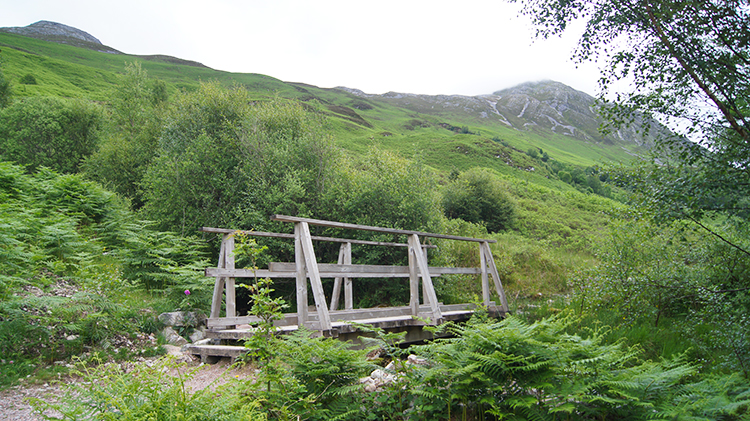 Footbridge over Allt a' Mhuilinn

It was 2.30 in the afternoon when I read the sign and left the road. I did not know if it would be nearer 5.30pm or 6.30pm when I returned. I did know I had a +700 metre climb though. It began easily at first, on a steady gradient along a generous access track. That did not last long though as the track being just 200 metres long. I turned a sharp right angle to the right and followed a narrow path set between thick fern which would wrap around any lower limb which strayed from the path. The path led me to a footbridge which led me over the flowing waters of Allt a' Mhuilinn which were on their way to stock the River Coe. 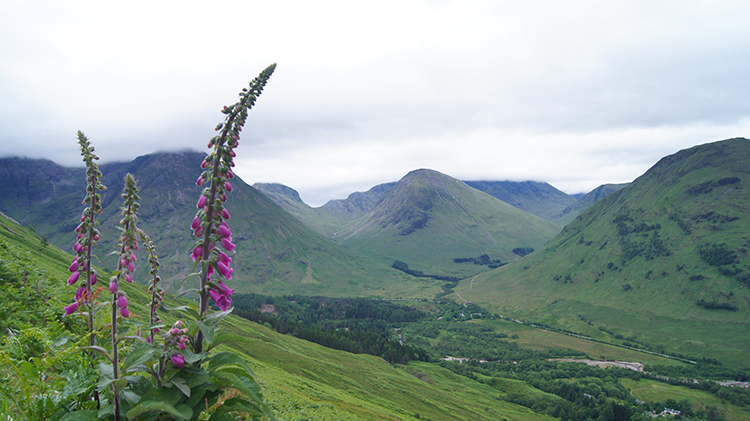 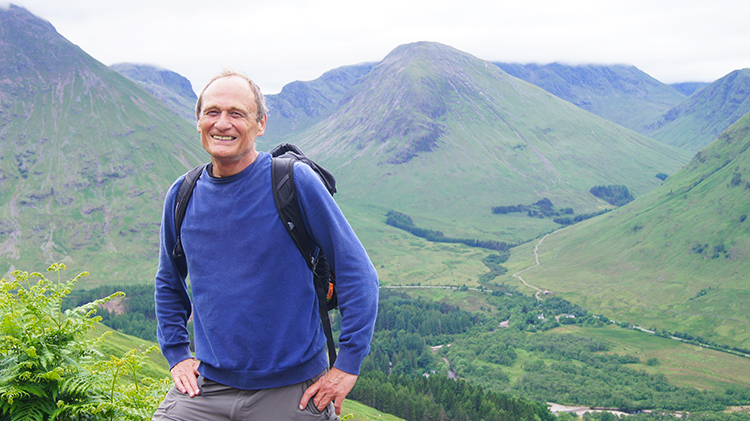 After crossing the footbridge the serious climbing began. In the first kilometer of walking after the footbridge I climbed over 350 metres. Half the height to the Pap had been gained and I was puffing like Stephenson's Rocket. I did take a few short breaks to compensate for the effort and catch my breath while making that climb. On a couple of the breaks I met other walkers making their way up the mountain. One, a group of four youngsters were excited though one of them was doubting whether the effort was worth it. Every day of the week" I said and adding "Once up there and looking out over the views you will be blown away. You may even be hooked on walking". I took a few group photographs for them and one of them volunteered to take one of me, which I accepted. Hence the mugshot. And yes, I was in my element, despite the effort I was loving every minute of the climb. Great views were already revealing, such as the one to the lower reaches of Glen Coe. 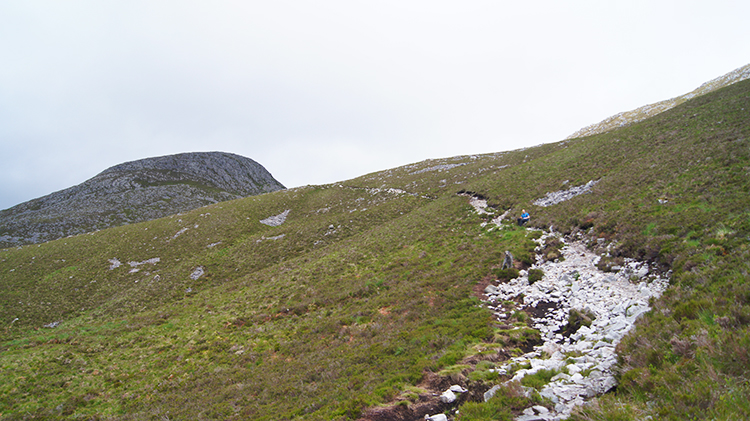 Climbing to the bealach 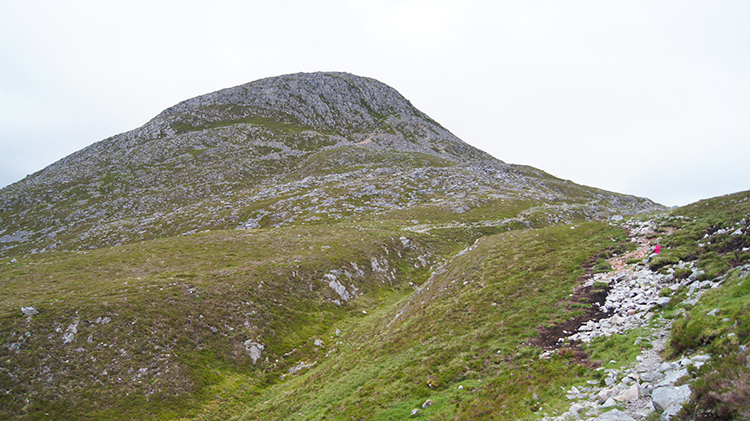 At around 500 metres altitude the terrain of fern and scatterings of small birch copses gave way to low scrub. A mix of course upland grasses and ground clinging heathers. A little lower down the Pap of Glencoe had disappeared from view but now it was re-emerging. And getting closer. I wanted to climb faster but the going was still steep. I came to two more people on the path between the 500 metre and 600 metre marks. The first was a good walker coming down from the Pap in the company of his trusty and wiry Wolfhound. It was such a friendly dog, and one so suited to the mountains which it was clearly loving being amongst. Next I came to a young lady sat down by the path and hunched to keep herself warm. While talking with her she said "I am waiting here for my family who have gone to the top". It appeared she was not too keen on heights. At least she had come this far.

Soon after I crested the bealach of Pap of Glencoe and Sgorr nam Fiannaidh (967m) and stopped to survey the Pap of Glencoe in detail. It was easy to work out the way up as the young ladies family were pointing it out to me as they made their way down. It involved a short steep walk on a path around the right hand edge of the breast and then a final short scramble up which I found to be extremely enjoyable. 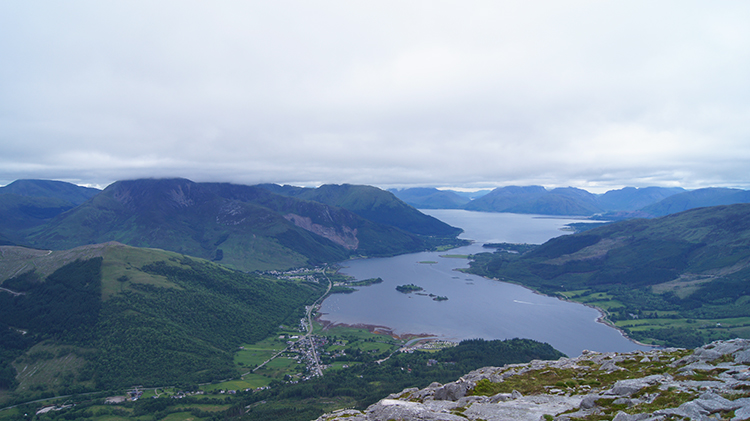 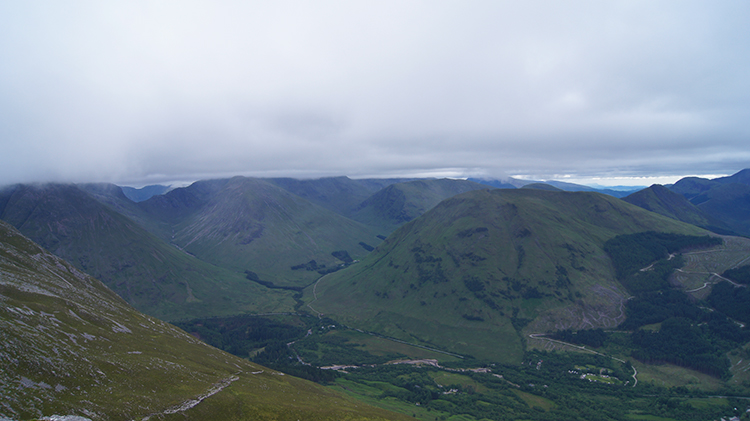 I had met another couple of walkers easing their way off the top of the mountain just as I crested the summit. Remarkably I had it all to myself. It was such a thrill to put my backpack down in a secluded and sheltered rock stack and walk around the top of the Pap to enjoy the views. Despite a swirl of cloud which was kissing the top of the mountain there were sufficient gaps in it for me to take a full 360 degree survey. To the north and east I could see the full ribbon of Loch Leven stretching from Ballachulish Bridge to Kinlochmore and Kinlochleven, both of which I had walked through on my 1,100 mile Great British Walk in 2011. To the south and east I could see Glen Coe and the near peaks of Bidean nam Bian, the 1,150 metre giant which bridges Glen Coe to Glen Etive. Best was west though, the magnificent and quite awesome view to Loch Leven and Loch Linnhe beyond. To Ardgour and to the Mamores. And with a little imagination to the Isle of Mull. All in all the views were breathtaking and more than worth the effort of climbing to attain. I would like to think the one who I met on the way up and doubted saw it for them self and is now hooked on walking. 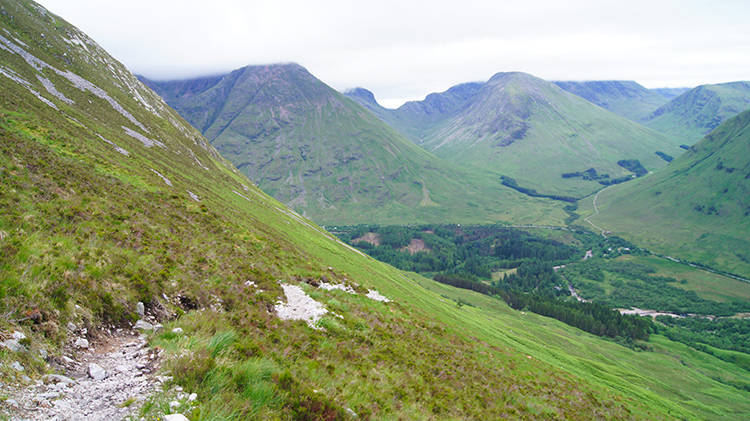 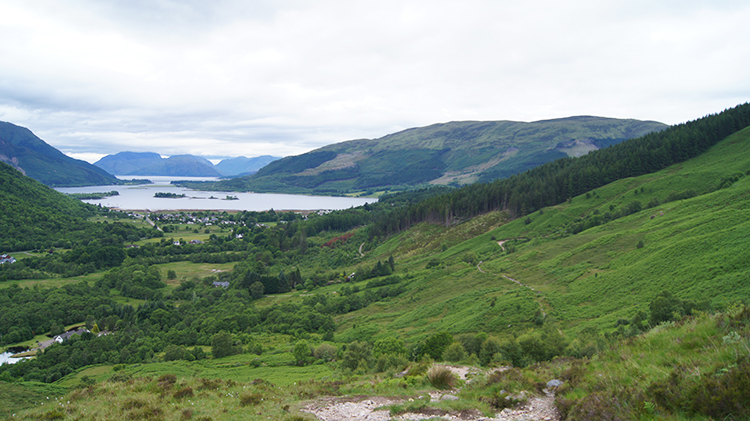 Heading back down the path

I stayed for as long as I could allow myself on the top of the Pap of Glencoe. I took in those stunning views as much as I could, all the time thanking the cloud sweeping over me for staying just above my head. To miss the views from the very top would have been heartbreaking. And with all the memories of the views milked in to my memory banks I set off on my way back down to Glencoe village. I walked down as quickly as I could, inevitably slipping on the loose stones of the track here and there, each slip slowing me down and forcing me to remind myself to take due care. I was also stopped by fresh inspirations with the views to the west in front of me. Though they were still over Loch Leven and Loch Linnhe as I lost height the mountains neighbouring the lochs rose to prominence. 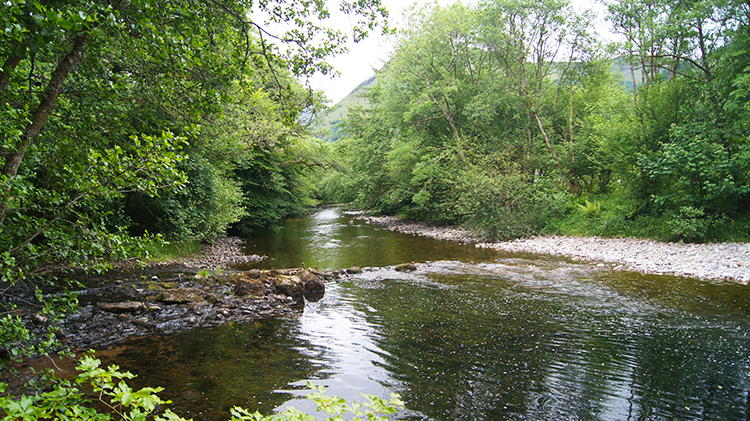 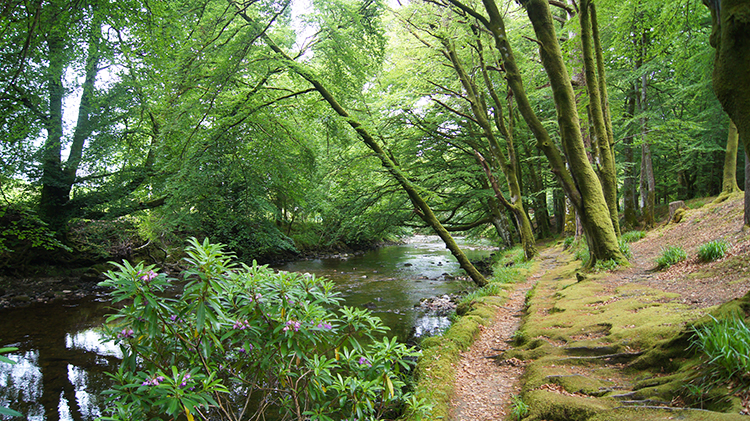 Riverside walk back to Glencoe

And then, without really noticing, I was down. It was 5.00pm when I passed the sign indicating a 3-4 hour walk. It had been two and a half hours and though I had climbed as quickly as my 60 year old frame could and descended sharply I did spend 15 minutes up at the top. Let's say three hours is about right and four hours if you fancy a picnic up there. Once down to the road I this time took my pleasure of walking alongside the River Coe and such delight it was. The woodland glade was a pretty canopy and the river flowed gently along in its mature stage towards its outflow into Loch Leven at the other end of the village. Birds sang for me from the trees in the early evening of high summer. It was a gorgeous end to a thrilling walk to the iconic Pap of Glencoe. Next time I see it I will admire it one more and with equal reverence. Only the next time I can say to whoever is with me "I have been up there. The views are just sublime you know".