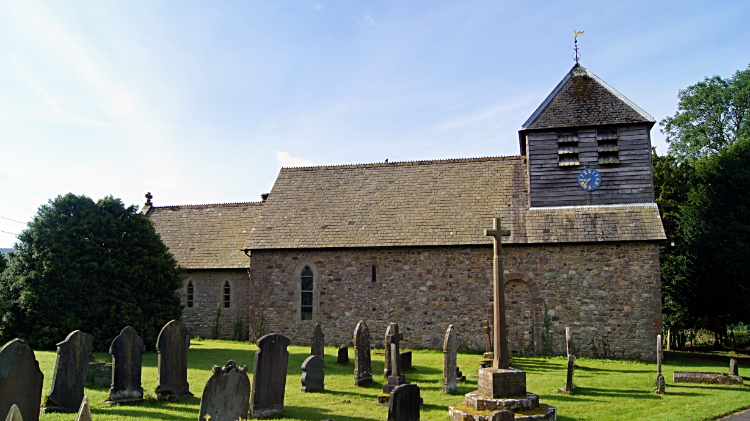 After spending the last couple of days walking some of Shropshire's finest country including Ironbridge Gorge, Wenlock Edge, Caer Caradoc Hill and the Long Mynd I had now arrived in rural south-west Shropshire, a part of the county completely unknown to me. My penultimate day on the Shropshire Way started well as I walked from my fine accommodation at the Crown Inn, Wentnor to be greeted by a very fine morning. And in knew it was set fair, not just for today but for tomorrow too, on my last day walk from Hopesay to Ludlow. I had to get to Hopesay first though and I was in no hurry, first taking a leisurely look around the village of Wentnor, a small village of little more than one street and yet with no less than twelve listed buildings, the highlight of them being St Michael's Church. 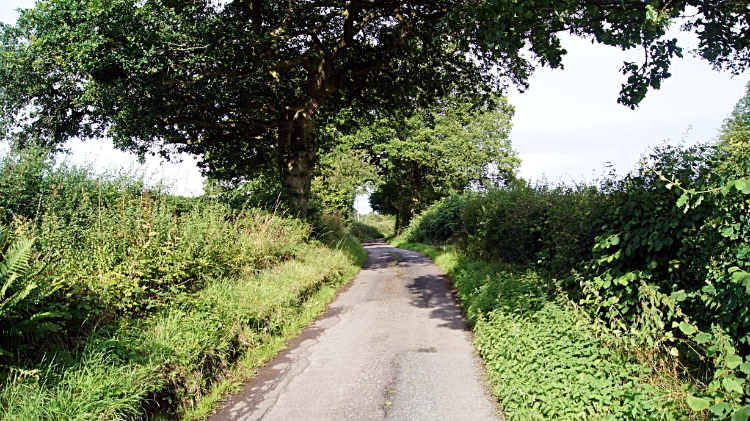 The road to Norbury 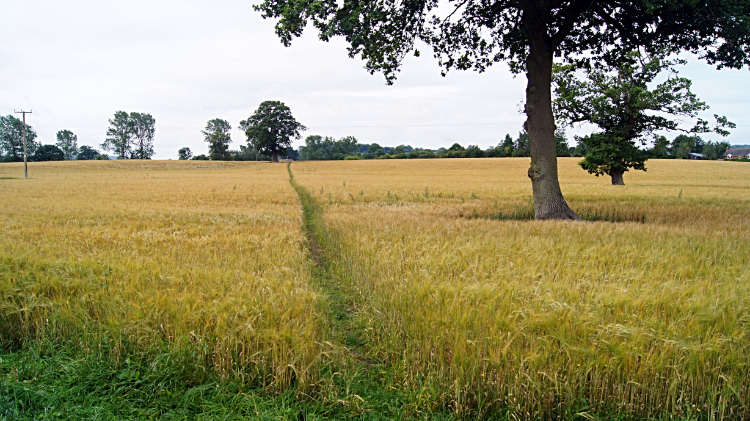 Field crossing between More and Lydham

Leaving the pretty village I headed east across a field to Walkmill. Then it was a long road walk to Norbury, a boring one really as I could hardly see over the high hedges either side of the road. I put my foot down, arriving in the small village of Norbury half an hour after setting off from Wentnor. I had covered two miles. Not bad going. Norbury had an impressive church too. Just like Wentnor. From Norbury I carried on walking east to Linley where I enjoyed a fine view of Linley Hall before turning south along a road which took me to the impressive village of More. A third outstanding church of the day was enjoyed here. St. Peter's Church, More has a fantastic timber framed top. Much like Wentnor's. While sitting on a bench at the church for five minutes I brushed off a lot of Teasel seed which had attached to me on the way into the village. Sticky stuff, my mum used to scold me and my brothers for bringing it in the house on our clothes when we were lads. 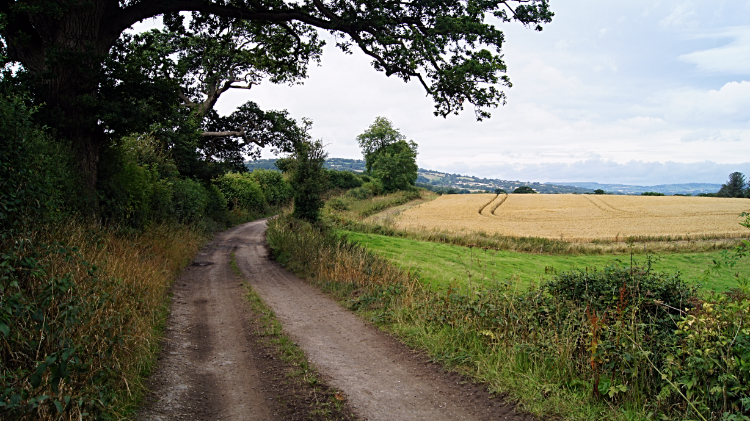 From More to Lydham I went via a field of Wheat which I cut through the middle of. Legally of course, a path following the Shropshire Way was laid out between the grain. that was easy. The next field was not as it was full of young Beef Cattle which gave me the stare. I had to go into the field though, edging gently around the side as best I could. My luck was in. They were not that bothered and left me alone. Phew. I could have tapped one on the nose with one of my walking poles had I needed to but I am glad it never came to that. From Lydham the Shropshire Way continued across a mix of tarmac road, unmade lanes, small copses, field sides and a bit of scrub. It was not the best walking I had enjoyed on the Shropshire Way and far from the worse. keeping on my way was no problem; it was just not a spectacular part. However, everything changed when I arrived in the quirky town of Bishop's Castle. From the start I could see this place was different. Many houses were painted. Some plainly and some in the town center as works of art. One had a painting of a tree growing up it. Another was covered in green spots of various sizes, like a Laura Ashley wallpaper design. The Vaults music pub was adorned with a reclaimed iron figure of a cross legged rock guitarist above the door and was painted over in lurid Orange. A series of three houses (pictured) were in different bright colours and draw to show they were pieced together with zips and jigsaw pieces. Brilliant it was. I loved Bishop's Castle. 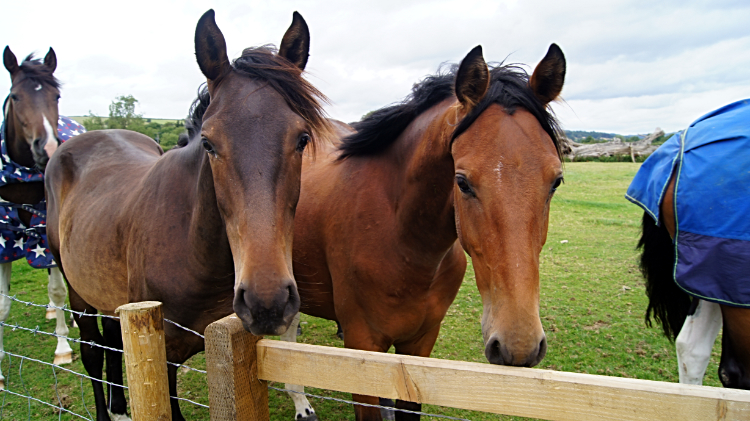 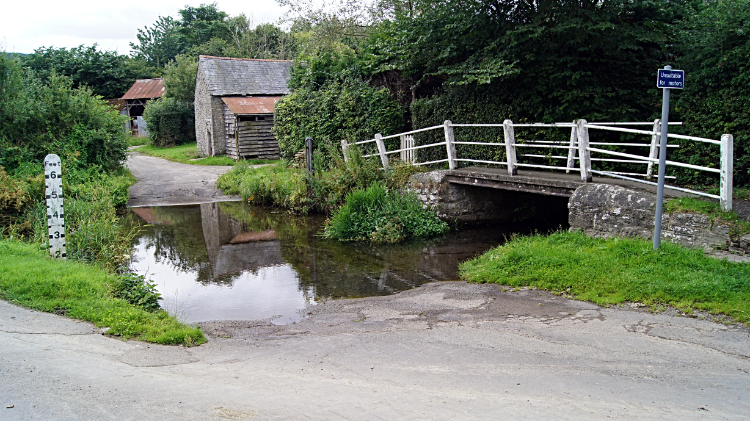 From Bishop's Castle I enjoyed a spell of quiet contemplative rural walking on good paths to the village of Colebatch. On the way I passed a sign on a house gate which read 'Beware of the Chickens'. It showed a cartoon caricature of three frisky hens too. After crossing the A488 at Colebatch I crossed more fields, all easy going over flat ground. One of the fields was full of horses. They all approached me and all behaved very friendly. a couple were dressed in horse rugs, one quite plain and the other all full of stars. One field stile over a small beck had the sign 'Bull on Route'. It was not there though. I looked everywhere before taking a step. From the fields it was back to roads and a walk along one to the hamlet of Brockton. A pretty road ford was the highlight of my short walk through which led to my longest climb of the day and to the highest point of my day too. 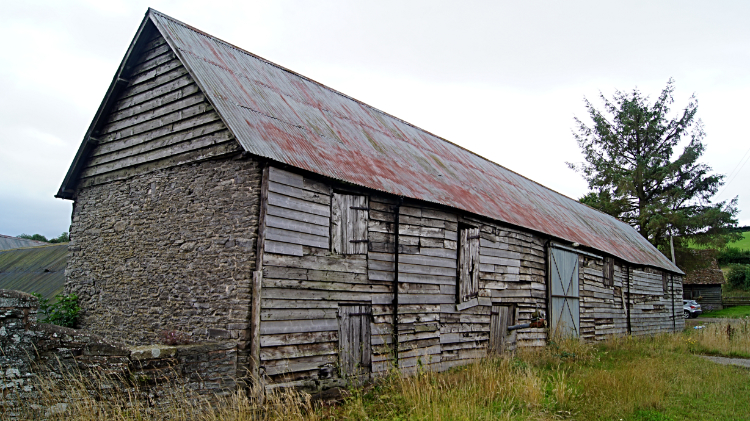 Rickety barn at Lower Down 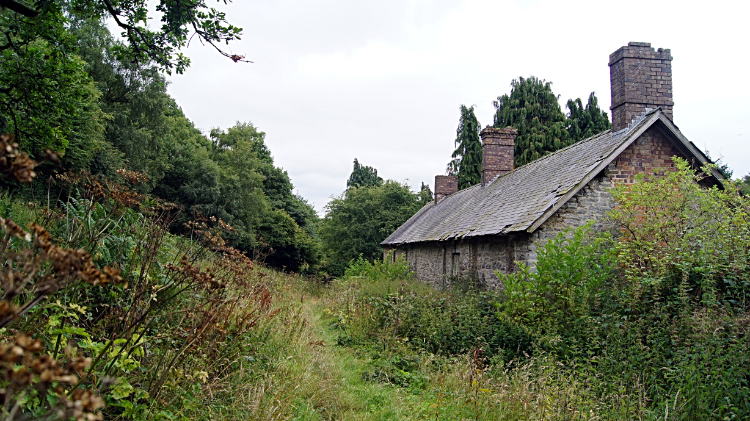 The climb of five hundred feet to just over 1,000 feet high (300 meters) at Bury Ditches car parking area was all by road. So just put my head down, pumped the energy into my legs and climbed. A high hedge on my left and the woodland of Sunnyhill on my right prevented me from looking at anything else anyway so all my energy and all my attention was devoted to the gaining of height. reached Bury Ditches car park soon enough but having seen enough of hill forts recently I decided against a visit, sticking to my Shropshire way walk instead. Therefore turning left from the road instead of right I continued on into the woodland of Walcot Park. The way through Walcot Wood, once an important Elizabethan Deer Park, was very old worldly and the place had the feel of eerieness. as if stuck in the Elizabethan age. Every habitation I passed was rickety with stuff strewn all over. Old rotting caravans in paddocks, rusting out house roofs. Witches watching. That kind of thing. If someone had come outside and offered me a cup of tea i would have probably run a mile! I am not saying it wasn't fun. It really was, just creepy fun. And I did read a notice board in Walcot Wood saying 87 species of Beetle have been found in the wood. So creepy is justified. 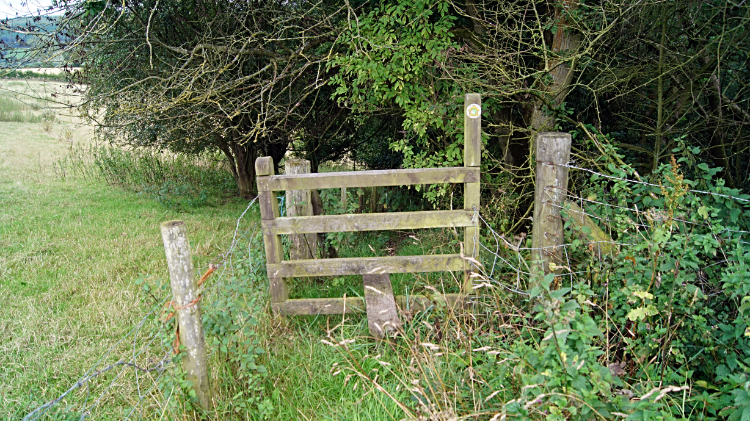 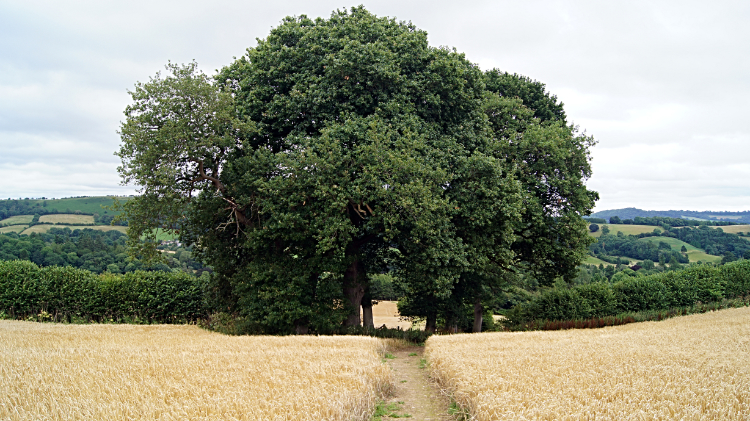 I emerged from the woodland in one piece and by doing so I had lost the height gain I had made at Bury Ditches. On reaching Kempton and crossing the River Kemp I had to do it all over again. This time by climbing over a hill called Burrow and close by to yet another hill fort before making my final descent of the day into Hopesay. The entertainment I had on this concluding part of my walk was provided by a group of young game birds, probably Partridge, maybe Grouse. As i walked up a lane they were stood on the lane about fifty meters ahead. And as I approached they ran to another fifty meter gap before stopping. Until I got as near again. Then again they ran. And stopped. And ran. And stopped. They must have travelled at least 300 meters along the lane before realising they must dive in to the side and seek cover to let me pass. Which they eventually did. How funny it was. I finished soon after, descending into the village of Hopesay, like Wentnor an others, having a church with a timber framed tower. A nice walk with a rural feel done. Perfectly pleasant.

In the evening I went for food and drink at the Kangaroo Inn, Aston on Clun where i got chatting to the locals. One of them was convinced I was the man who had just bought a nearby manor house for a few million. I wish.