Summary: This short walk is a delight for all lovers of the outdoors and particular those who admire flora. Flowers of many varieties and in plenty of number are all over Lineover Wood. And for those who admire tremendous views then Ravensgate Hill provides one of the best in the Cotswolds. 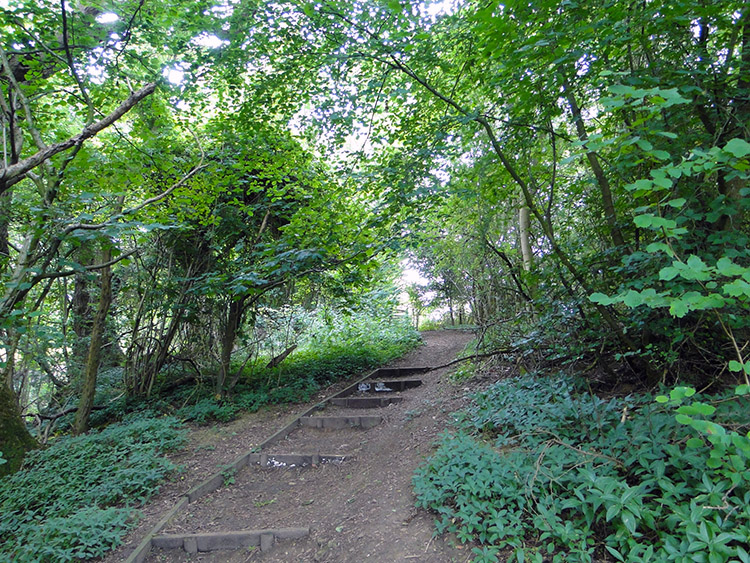 Beginning the climb to Lineover Wood 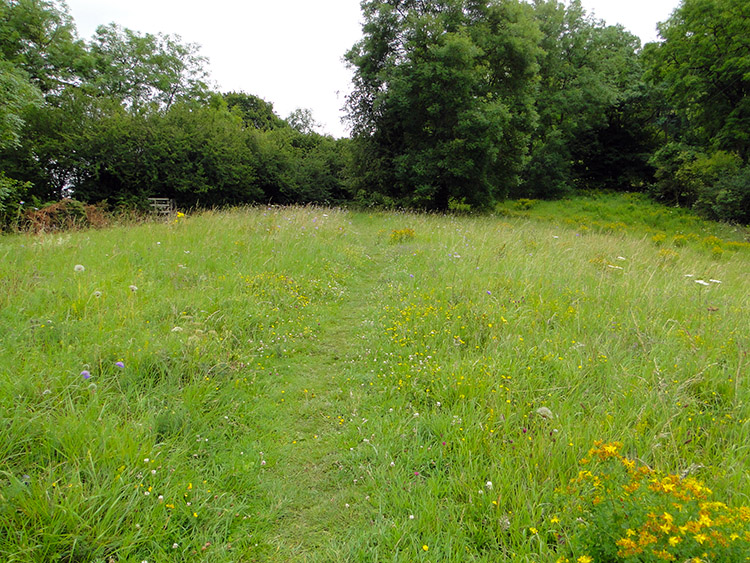 I fell in love with Lineover Wood the first time I visited in springtime and resolved to return on a lovely summers day because someone I met on my first walk through when the trees were just budding and showing first signs of green told me the wild flowers in the wood were spectacular in high summer. With such a recommendation how could I not? I parked up on a road just off the A40 and beside a dismantled railway line. Heading back along the wide verge of the A40 brought me to a sign beckoning me into Lineover Wood. I climbed the first steps in high anticipation, not only was it a summers day, it was dry and warm with sunshine promised. With confidence in the weather I emerged from my first climb into an open glade, full of rich wild grasses and meadow flowers. A bench invited me to sit but I was eager to continue so I walked from the glade into the wood. 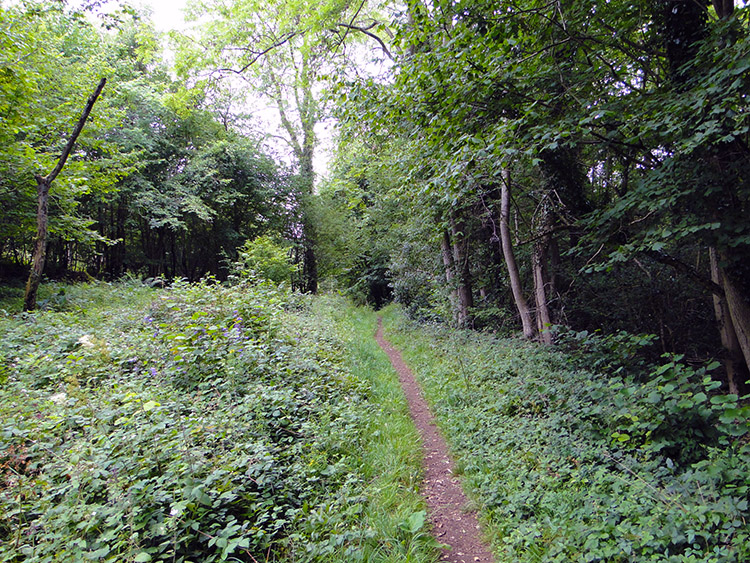 Into the tree canopy 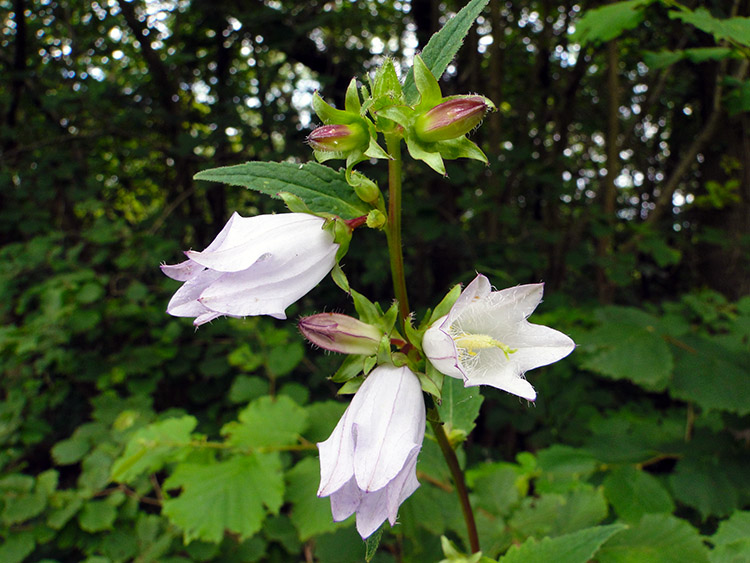 Walking briskly I soon took myself from open ground into the tree canopy. Immediately I breathed in the smell of British summer woodland with its smell of fresh flowers, grasses, trees and the inevitable whiff of wild garlic. The odour of the woodland mix always invigorates me and I walked on taking in the air while looking around at the varied foliage on offer. Soon my attention was taken from the high trees to the low flowers. I spotted Bellflowers and a Lily of the Valley and delighted at their delicate shapes. 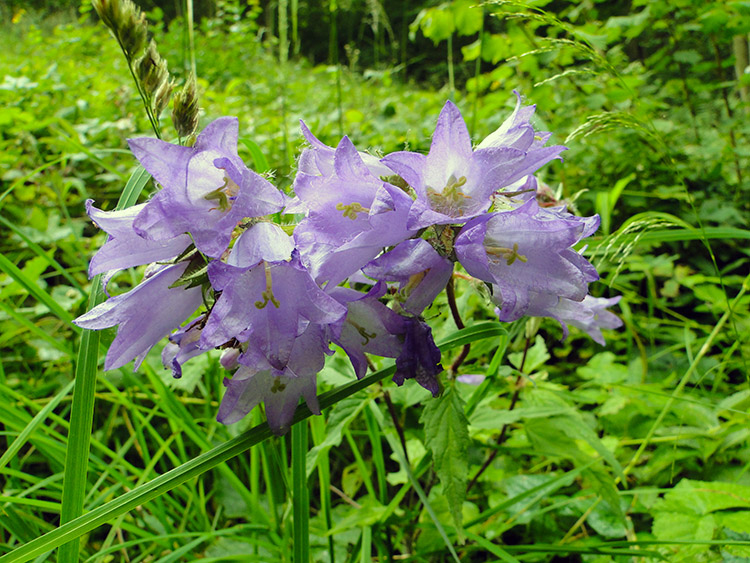 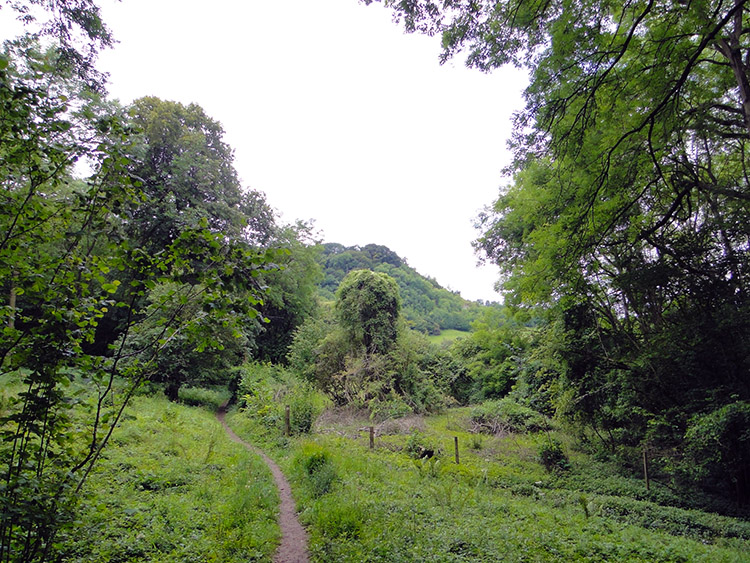 Further into the wood I met a chap with Binoculars looking for Flotillary Butterflies. He said conditions were not quite right but a couple of degrees more would see them in abundance. It was warming up so I guess he would be satisfied later. I asked him about some of the beautiful flowers I was photographing and he named some of them for me. He also mentioned the Lily of the Valley was a nettles companion. I did not know that so I learned something. 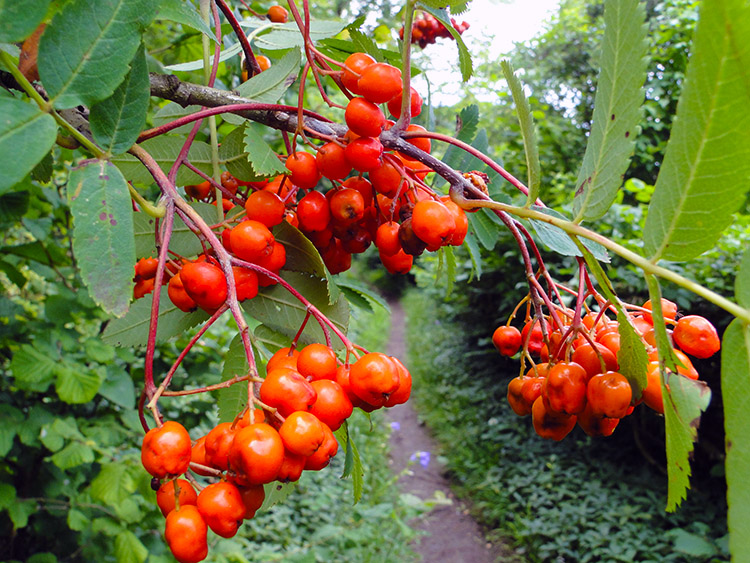 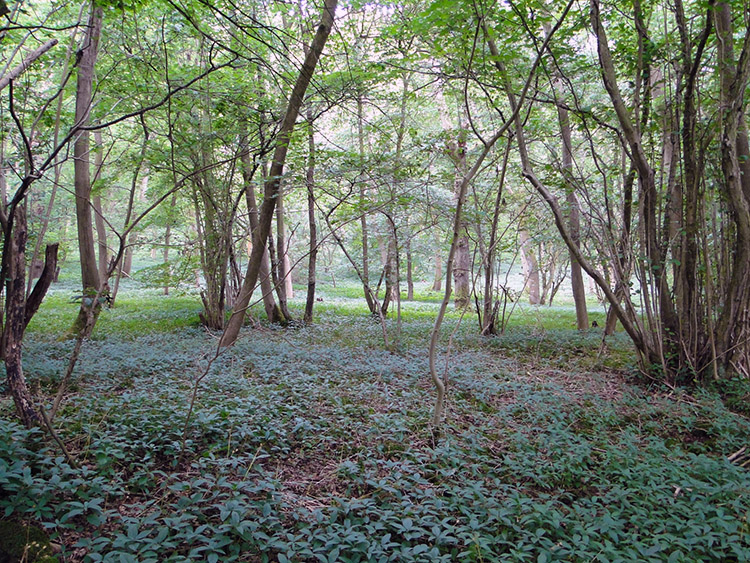 I continued walking through Lineover Wood continually enjoying the scene. As well as the abundance of flowers and trees there were also clusters of Rowan Trees packed with brilliant red berries. Further into the wood I came across a Birch Coppice and spread around the ground were masses of Wild Garlic making the odour around all the more powerful. Enjoying all the variations as I walked through it was not long before I came to the end of my woodland experience. I was emerging into light. 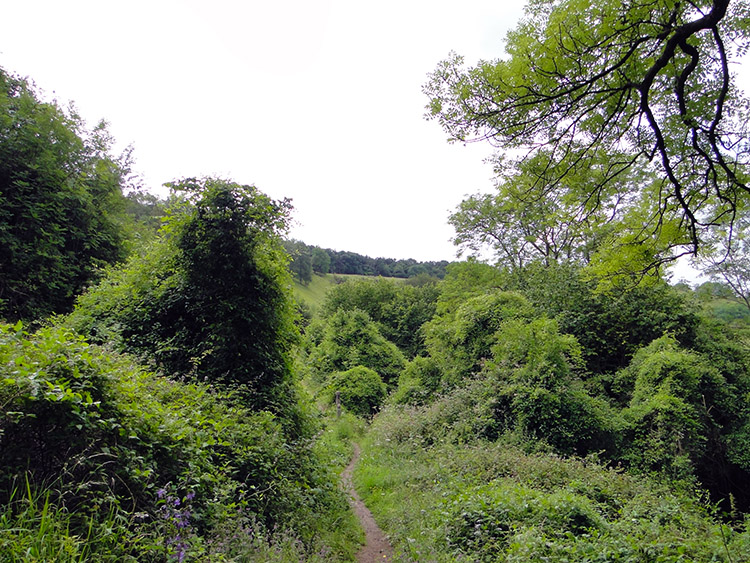 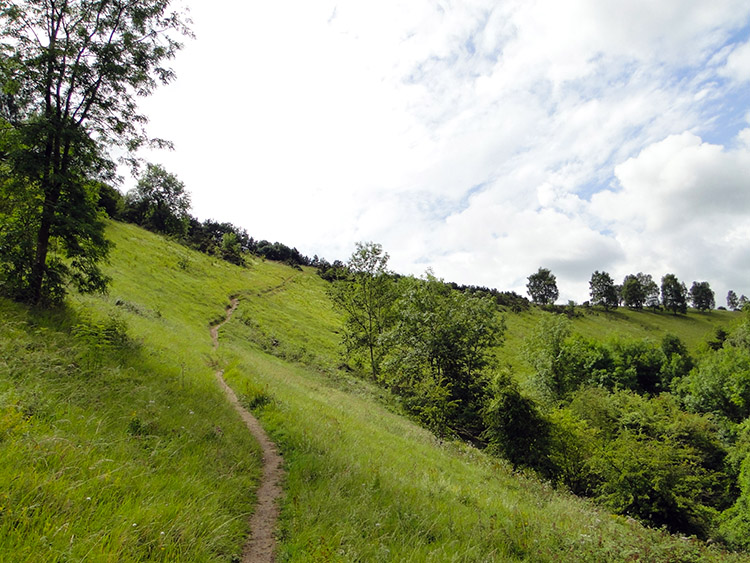 As I walked in the light of the day and past a thick cluster of hawthorn I saw the path ahead, a steep climb of Ravensgate Hill beckoned. After the pastoral level of Lineover Hill the climb looks daunting but it is actually the shorter of the two significant climbs on the walk. The first I had done from the A40 roadside to the open glade near to the beginning of Lineover Wood, That had been an ascent of 420ft in half a mile. What faced me now was only 210ft in half a mile, exactly half of what I had done earlier. The first climb had been secluded by woodland, this was open and clear to see. It looked more. Head up, straight ahead and pacing steadily I began the climb. It was taking me to a brilliant moment.

The Vale of Evesham as seen from Ravensgate Hill

As I climbed Ravensgate Hill I could sense a WOW moment. The more I climbed the more the views to the west, north and east revealed themselves are they were simply fantastic. With the sun now out from its milky cloud canopy the Vale of Evesham looked stunning, as did the mountains beyond. I sat on a bench, took lunch and enjoyed a brilliant refreshment break taking in the magnificence of it all. There is no better place than Britain in summer and I was looking at its beauty as I rested. A gentleman approached me and stopped to talk a while. We both revelled in the view we were enjoying and he told me the story of how JR Tolkein took inspiration from this view and used it for the structure of Middle Earth in his Lord of the Rings trilogy. After learning that I said farewell and resumed my walk, in the rich knowledge that I not only know more about Wild Flowers but also about British classical literature too. Walks have surprising revelations. 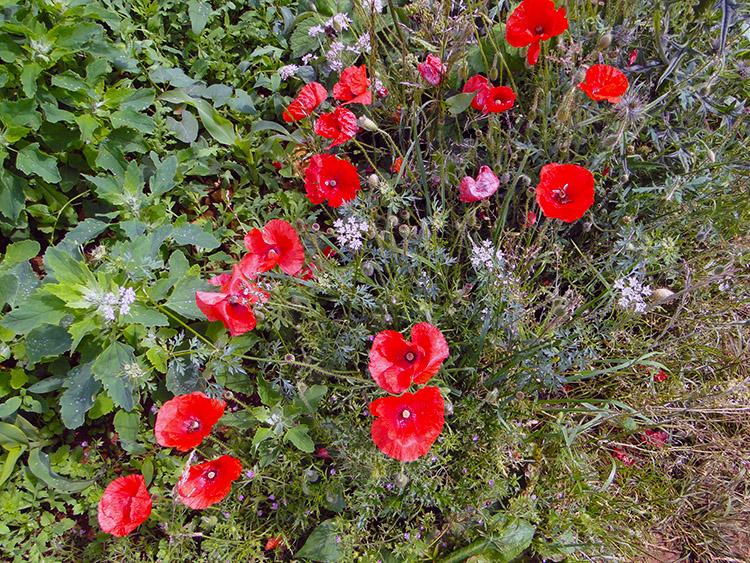 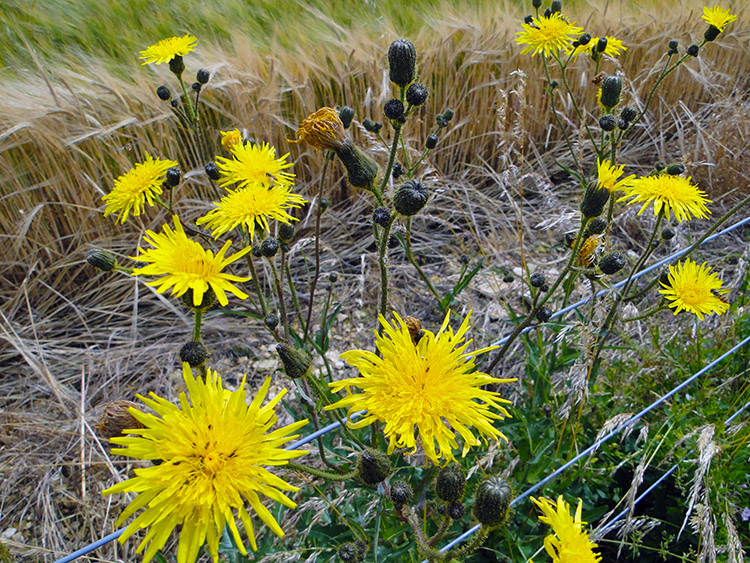 Dandelions are beautiful too

The final stage of the walk took me on a continuously steady descent of Ravensgate Hill, first by tracking west, then east and finally south from Old Dole Farm back to the car beside the dismantled railway line. On my descent of Ravensgate Hill I continued to enjoy the views and even the far distance ones were disappearing I still had plenty to enjoy closer by. On one field side Poppies were prolific, a wonderful red blaze of colour amongst the green and further still a group of Dandelions, much maligned as weeds but in the right place a brilliant show all of their own. This Cotswold walk had been a gem, short but ever full of things to see. The walk provided me with one of the best showcases of flowers I have ever enjoyed on a walk. It was quite simply an absolutely brilliant walk.