Summary: A lovely and undulating circular walk of eleven miles in the south-eastern corner of the Cotwolds. Starting out in the very popular village of Bourton-on-the-Water the walk follows first the Windrush Way and secondly the Diamond Way to the gorgeous village of Naunton. From the village the walk climbs for around sixty metres by following the Warden Way to Eyford Park before leading on a downhill course to the villages of Upper Slaughter and Lower Slaughter. Afterwards the Monarch's Way is joined for the return to Bourton-on-the-Water. 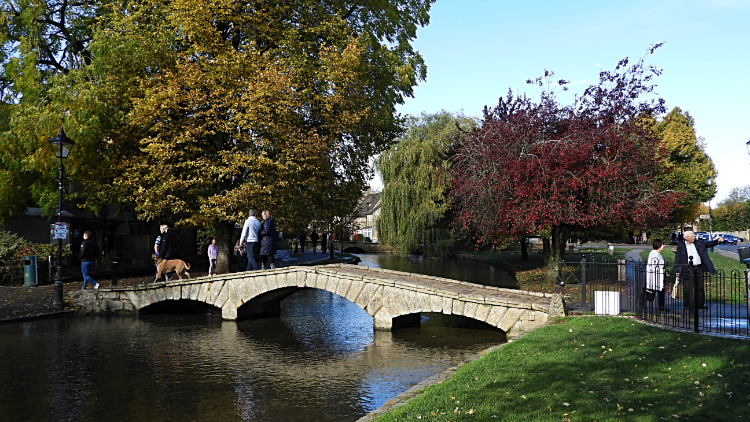 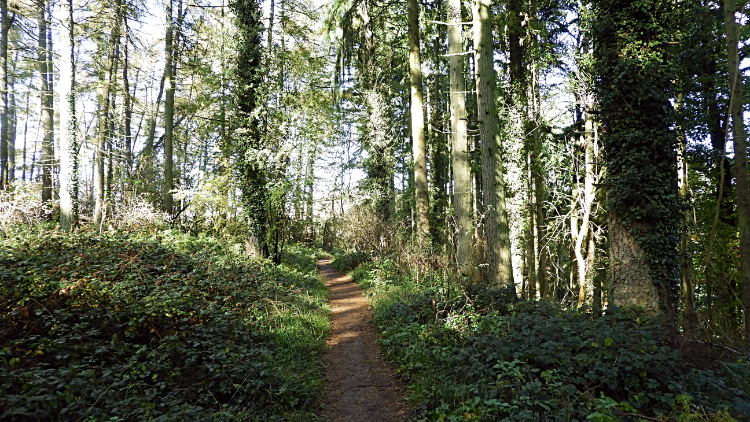 Steve and I travelled over from his home in Northants, quite a journey but such was the anticipation of this walk we deemed it worth it. After parking up some way from the centre of town, a necessity in most popular Bourton-on-the-Water, which is a chore, we found a shop serving the most amazing pasties and we each had one for a late breakfast. Now we were ready to go. Despite it being the last week of October it was a lovely warm day, quite the Indian summer, as we set off from the centre of the pretty Cotswolds village and followed the River Windrush in a westwards direction. The first stretch through the village was utterly delightful as we soon left the streets behind and reached the riverbank. The river trickled gently along and the3 calm waters prompted Steve's dogs Keira and Ziggy to jump in for a short swim. Once they were back on dry land we continued on past an old mill, now a private house, which arched the river. Next we followed Lansdowne to cross the A429 and enter the Gloucestershire countryside. Following the Windrush Way we continued on towards another mill at Aston. 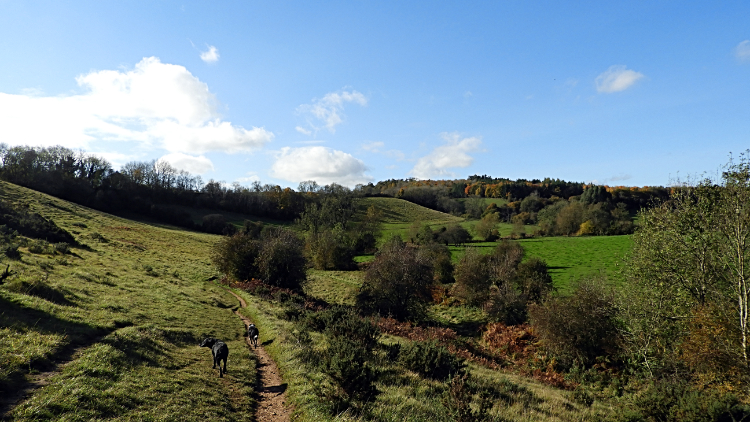 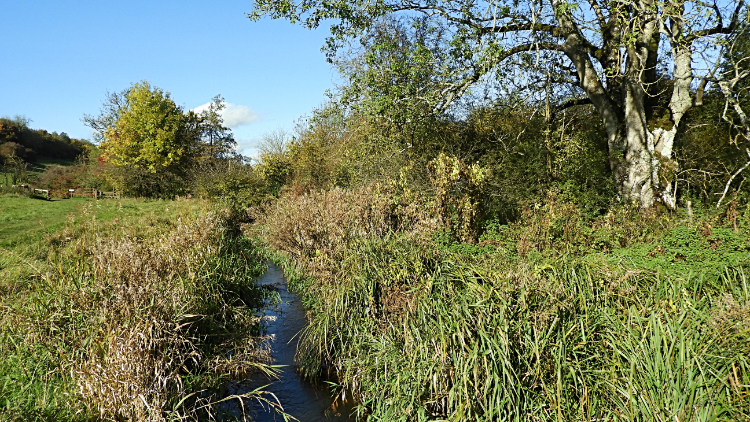 We passed signs for 'Operation Leviathan', an initiative to stop illegal poaching of fish from the river along the way and we passed a couple of groups of walkers too. Near the site of the old mill at Aston, now a private dwelling too, we met more walkers. This was clearly a much used trail, a favourite for locals and visitors too. Who could argue, the paths were good and the scenery in our eyes sumptuous. The trail, still following the Windrush Way, was meandering and rolling up and down small hills and banks. A short stretch of woodland added to the variety. It was quite beguiling. 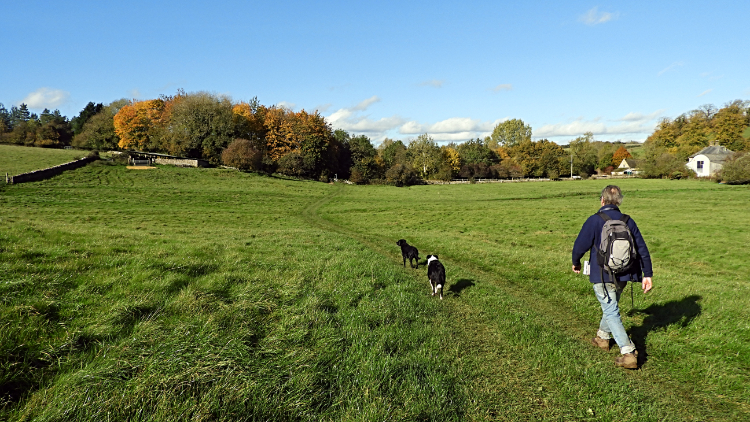 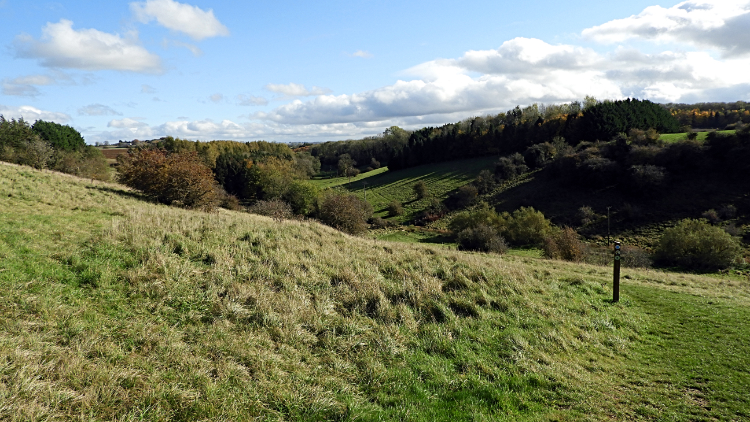 Somehow we left the crowds after the woodland, enjoying a quiet walk across pretty fields towards the site of the Medieval village of Lower Harford. It was never a busy village, less than a dozen inhabitants at its height, and all left to remind us are bumps and hollows in the surrounding fields. It intrigues me. It excites the archaeologists. At the road near Lower Harford farm Steve decided to cut his walk and head for Lower Slaughter where he would meet me later. He wasn't feeling energetic enough for the longer walk and took the dogs with him so I could up the pace. After arranging a place to meet I continued on to Naunton Downs, another lovely slice of Cotswold country. I stepped out, thoroughly enjoying myself. 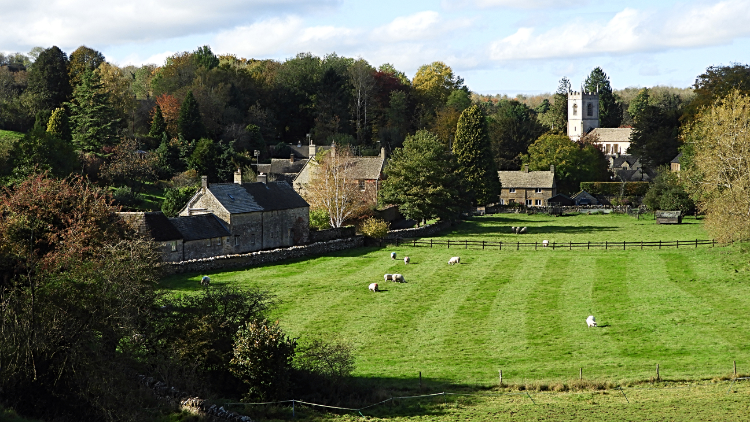 Approaching the village of Naunton 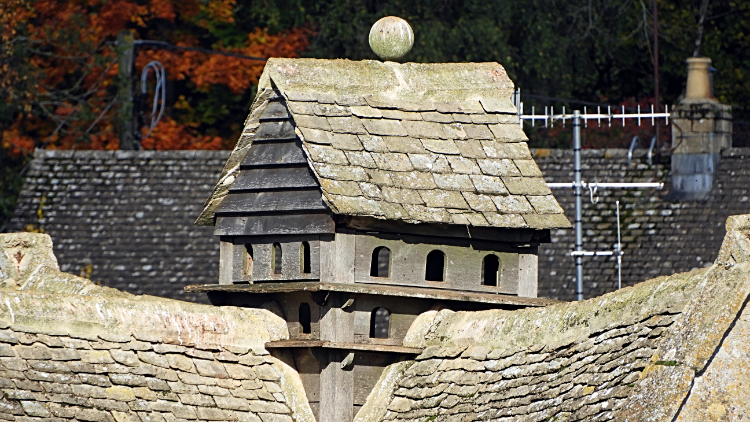 From the peace and quiet of Naunton Downs, which I had to myself, bar for two solo lady walkers I met going the other way, I came to the hustle and bustle of Naunton Downs Golf Course. There were plenty of amateur sportsmen out in the late October sunshine, enjoying one of their last rounds before the onset of winter. They seemed to be enjoying their endeavours of getting a small ball around the course as much I did of getting my feet over the eleven miles of this grand walk. Immediately after my walk past the golf course I crossed the B4068 and followed a quaint and pretty coppiced avenue road down towards the village of Naunton. As soon as I saw the gorgeous peachy Cotswold stone buildings I was awestruck at the beauty of the village. "Wow, this is incredibly beautiful" I thought to myself. As I walked into Naunton I was immediately taken by the meticulous care taken of the village by the locals. There was no litter to be seen anywhere. Naunton was spotless. 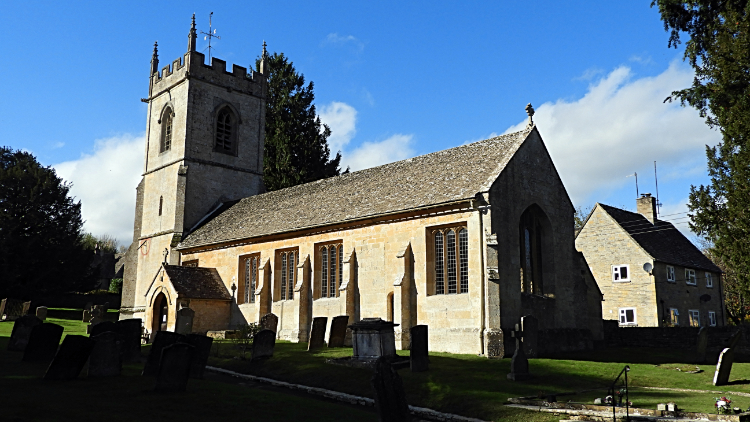 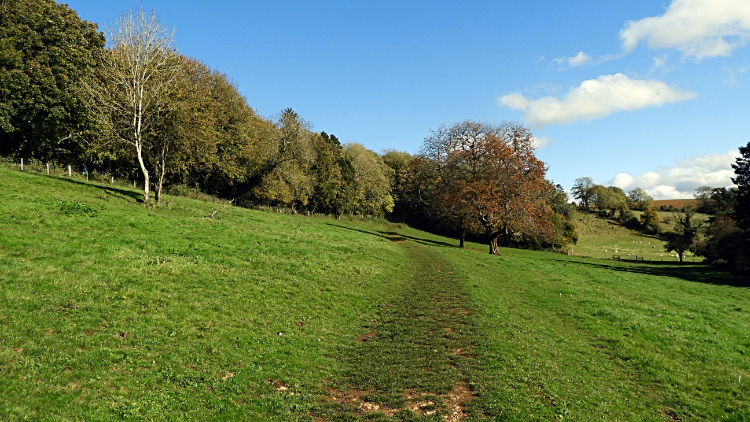 The climb from Naunton toward Brockhill

The village was a joy to walk through. I took time out to visit the church grounds and I also took a short detour to admire the house with a small house on its roof. In fact it was the most outrageous Dovecote I have ever seen, intricately built in the form of a cottage. They must love their Doves in Naunton. Continuing on my walk through the village I arrived at the junction where I needed to turn left to remain on my way. A little way straight on was the Black Horse pub where a few people were in the beer garden enjoying their sunny afternoon lunch. I was tempted to join them for a quick pint but i had an appointment to keep with Steve so carried on my walk, stopping briefly to take a swig of juice from my provisions. I needed that refreshment boost too as the longest climb of my walk immediately followed my departure from Naunton. 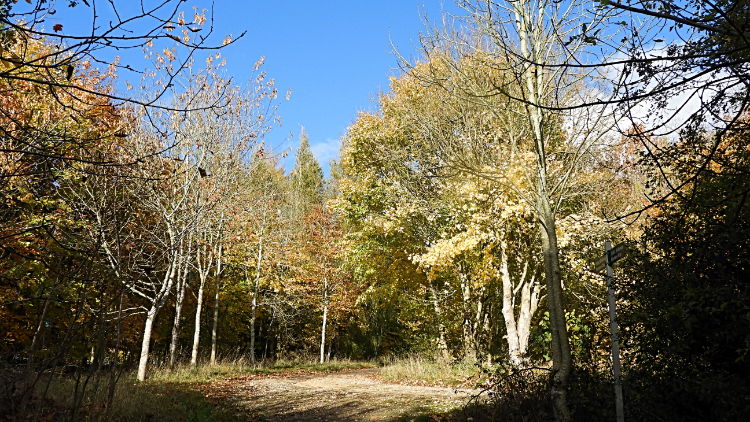 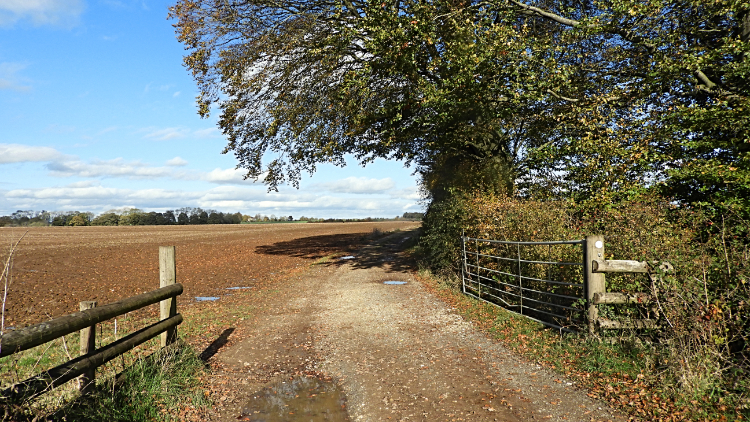 The climb was all of sixty meters over a kilometer to Brockhill, not much in my usual scale of things but a night of revelry at Steve's the night before made it a little harder than it ought to have been. Still it was easily done and I was soon enjoying brilliant extended views of the Cotswold countryside from the heady heights of over 200 meters elevation. Now on the Wardens Way I topped off at around 217 meters near a disused quarry on the table top of Brockhill before starting my descent towards Eyford Park. A stretch of lush thick woodland reaching along the south perimeter of the park caught my attention. For two reasons. Firstly for the attractive mature trees tinged with Autumn browns and reds and secondly for the couple of Red Kites circling the tops of the trees. I am used to this majestic bird which fill the skies around my hometown of Harrogate in North Yorkshire now. But I never tire of their beauty of of watching their graceful soar and flight. Watching them I made the descent to the valley of the River Eye without really noticing. 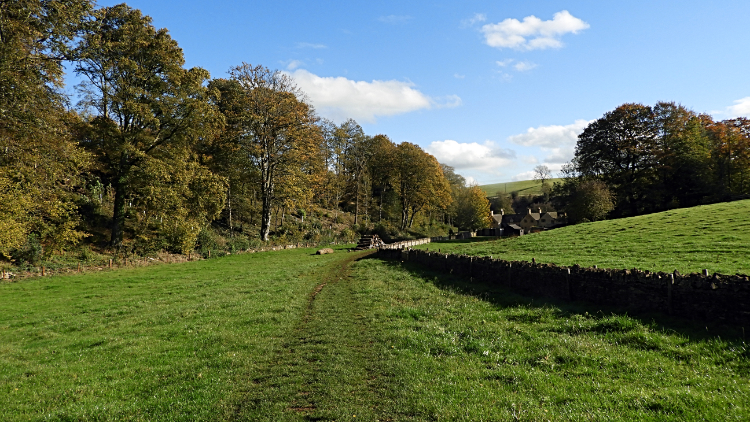 On the edge of Eyford Park 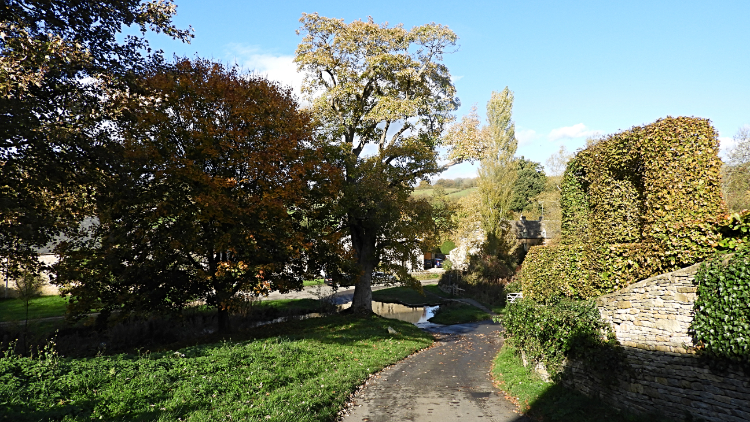 After a short walk alongside the A4068 I turned right to follow a tree shrouded track following the River Eye downstream towards Cress Cottage. Along this stretch the river was tamed with lots of dams and weirs to form a series of commercial fishing ponds. I did not see any fishermen about but there were a couple of keepers working on the ponds and a couple of diggers carrying out some dredging maintenance. Beyond the ponds I arrived at the isolated and very pretty Cress Cottage at which point the track ended and I was led into a field leading over a hump and then down towards the village of Upper Slaughter. 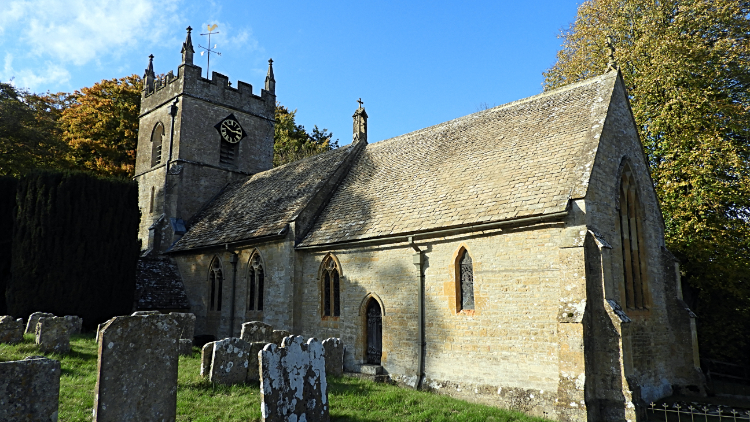 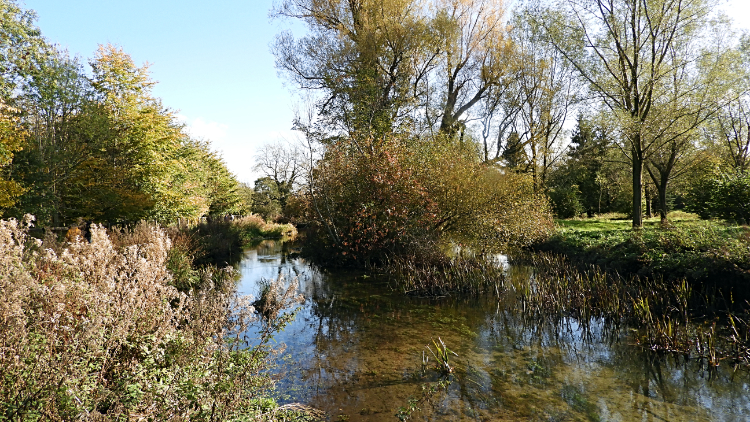 After the peace of solitary walking my arrival in Upper Slaughter was a bit of a shock. There were people everywhere. Some were sat on benches looking over the village pond and some were stood on the street corners. More were milling about looking here and there and all the pretty nooks and crannies of the village. It was undoubtedly pretty in Upper Slaughter but too busy for me so after a quick skirt around the grounds of St Peter's Church I continued out of the village and on my way. One aside before I leave the village though; I had read that on the night of 4 February 1944 during Operation Steinbock a Luftwaffe bomber dropped 2,000 incendiary bombs on Upper Slaughter. What must that have been like for the people of this innocent and pretty place. Gladly, no one was killed though some buildings were damaged.

The near mile of walking from Upper Slaughter to Lower Slaughter was some of the best walking I have experienced in the Cotswolds. Which is saying something. Again I was in the company of other walkers now but purely understandable as the whole way was lovely. First I followed the lethargic and pristine River Eye around curves and bends before leaving it to manage its meandering way while I crossed a field bee-line straight to a gate where I rejoined the river on the approach into Lower Slaughter. The closer to the village i got, the more walking groups and families were stood around, admiring the peace and calm and beauty at the riverside. Meanwhile I passed them and walked on into the village. 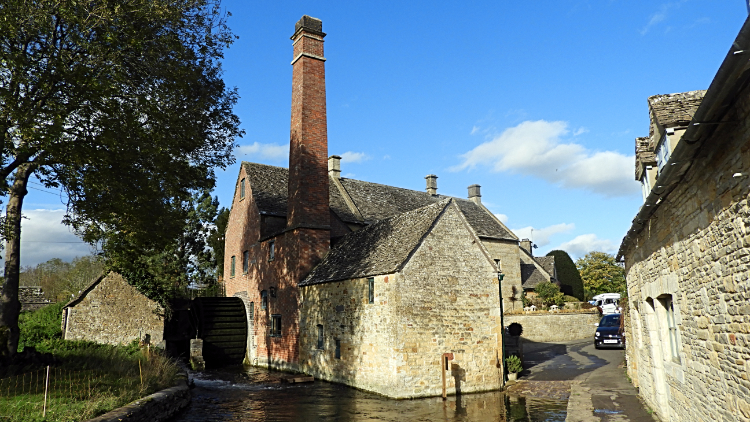 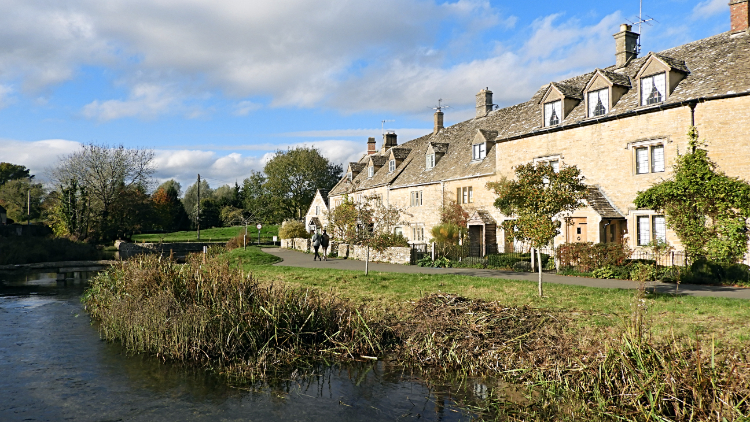 Lower Slaughter was no disappointment after the thorough joy of Naunton and Upper Slaughter. A third awesomely pretty and completely tidy Cotswold village enjoyed on this walk. Actually a fourth after Bourton which namely a village is in reality a town. The first highlight I came to in Lower Slaughter was the village mill. The mill has an undershot waterwheel and a chimney for additional steam power. The Old Mill, as it is known, is now a museum. Just beyond the mill is the heart of the village and what a village it is. I found the first west-side part of the village with an exquisite row of cottages set beside the river the prettiest part of Lower Slaughter but indeed all of the village was spectacular. "This is some walk" I thought. A real gem.

From Lower Slaughter, now in the company of Steve, Keira and Ziggy once more, and with the pace slowed, we headed back to Bourton-on-the-Water by way of the Heart of England Way, Wardens Way and Monarchs Way. here are plenty of named trails to follow around here for sure. Soon after we arrived back in the village which should be a town and a little later I was recalling a fantastic walk on the drive back to Steve's in Northants. "I must come back here and bring Lil for a shorter walk".