Summary: This walk begins in Middleham, childhood home of Richard the Third. By deliberately misquoting the fabled king I say "Now is not the winter of our discontent" for this walk makes the cold season a pleasure by taking us on a scenic tour of the area including a visit to Coverdale and the ruins of the abbey which once thrived there. 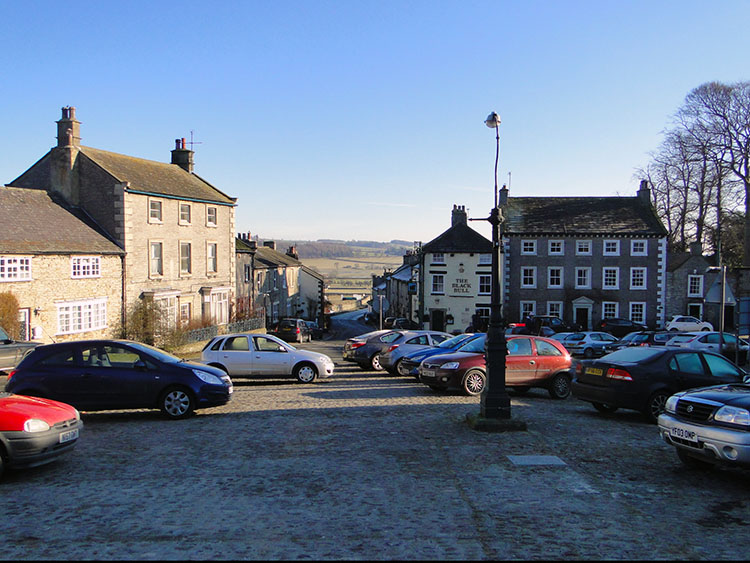 Middleham, starting point of our walk 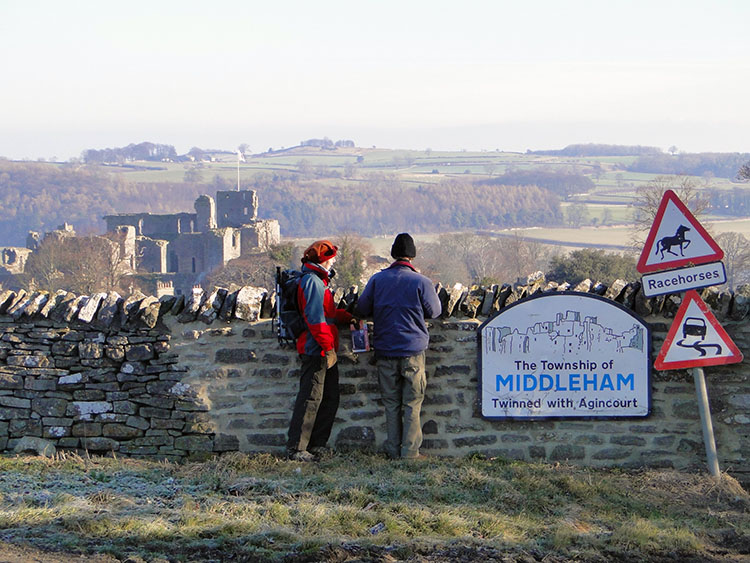 Looking back to Middleham Castle from the moor

I love the turn of the year. Christmas and the New Year break is all well and good but the break happens at the most dismal part of the year with some days hardly getting light at all. I believe it is more than a coincidence that we have a work break when the the days are at their shortest. Anyway, enough of my conspiracy theory, we have a walk to do. The choice of walk had already been determined, I had Middleham in my sights for a while since I read about the history of Middleham Castle and the prominent part it played in the early life of Richard III. The choice of day was random, I had waited for a sunshine guarantee and on Saturday 29th January, 2011 I got my wish. On awakening to a glorious sunny morning I accelerated my usual lethargic activities of a Saturday. I was in a sanguine state and got into action immediately by collecting the morning papers, hastily eating breakfast, getting mobile, picking up allies (Leena, prepared late evening and Dave, not prepared at all) and driving to Wensleydale. Once at Middleham my allies and I were soon on our way, walking west towards Middleham Moor. 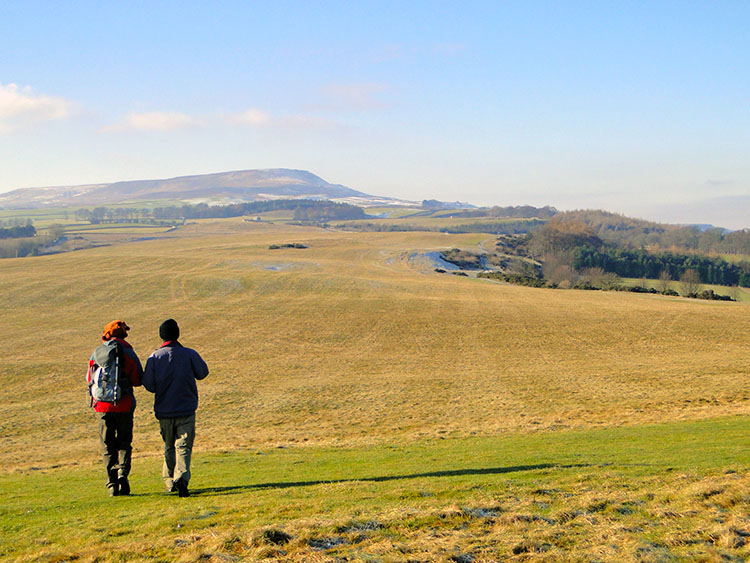 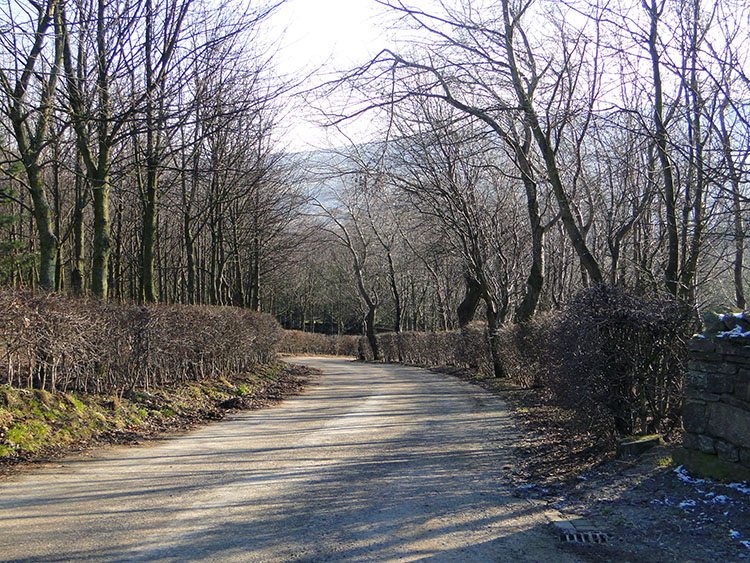 Tree lined roadside walking from the moor to Tupgill Park

I had deliberately chosen this walk as the first of the year, not only for the historical connections to Middleham and the surrounding area but also because at just short of six miles it was a reasonable distance for a first walk of the year, sufficient for a workout but not too taxing on legs used to inactivity from winter inaction. A gentle reintroduction into walking after a seasonal break is better than overdoing it. We ambled out of Middleham and up toward the moor stopping to glance back at elevated views of Middleham and the castle and stopping to let nervous young racehorses pass. There were plenty of racehorses out being worked, Middleham is one of the north of England's race trainers centres. You could pick up many a good tip here from trainers, jockeys and stable staff on the gallops or frequenting the hostelries of Middleham and neighbouring Leyburn. It's not our game though so we continued on without questioning. Watching the horses work out was enough sport for us. Further up and on to the moor we went toward the moor top trig point which we dwelt at for a while before rambling over the moor, keeping a due west path toward Naylors Hill before turning south to follow a road toward Tupgill Park. 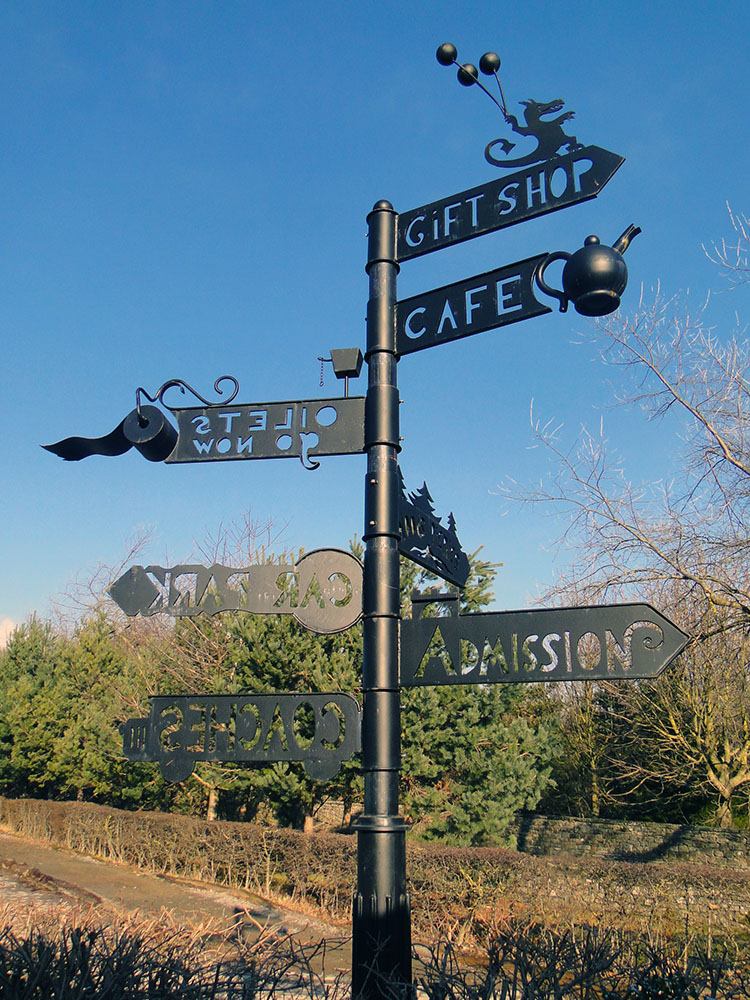 Appropriate signs of where to go in Tupgill Park 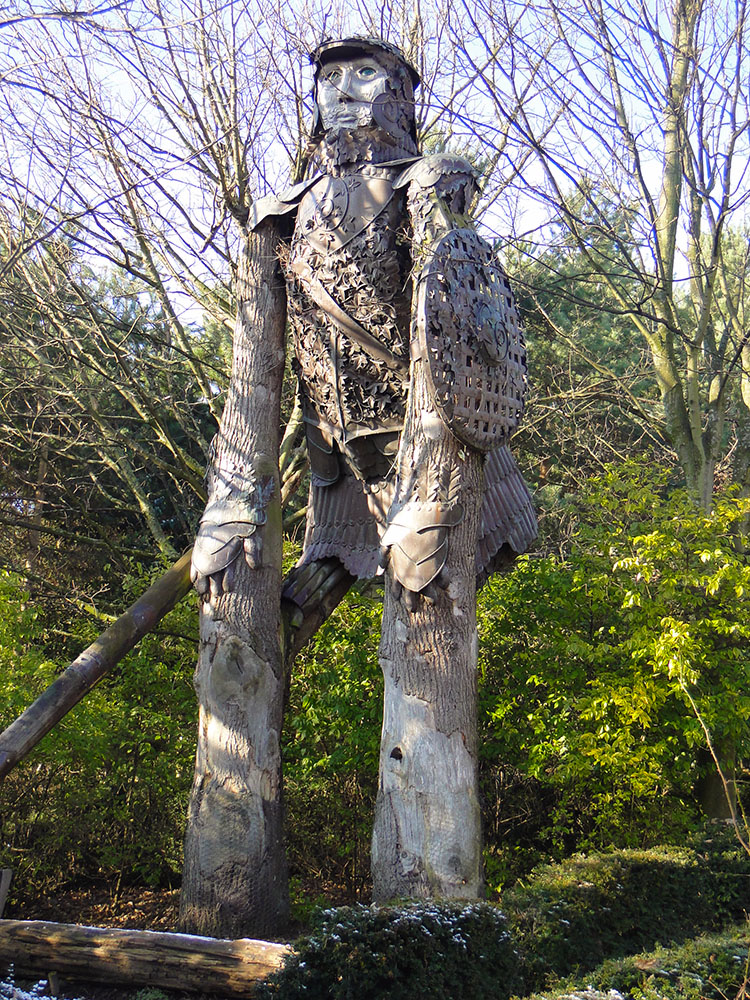 The approach to Tupgill Park was on a descent from the moor through woodland. It was lovely as we wandered down on the road bisecting the wood quietly listening to the birds singing on their courtships. They, as we, know Spring is around the corner and they, like us, are preparing for an active time. All nature awakens as the sun returns, it is a harbinger of change. Soon we came upon Tupgill Park and our attention was immediately captured by the quirkiness of the place. There were peculiar features all around. The first thing we spotted was a grand old tree with a large hole in its centre which we took a closer look at, only to discover it was a Hobbit Tree. Initially alarmed by the Hobbit residing in the hollow; he was alarmed too but we soon shared a friendly moment. He was great and smiled at us, looked out for a moment then retreated into his home. It was a wonderful moment meeting a spirit of nature. Next we came across a wonderful sign which indicated directions to features by suggestive design. For example there was a teapot pointing the way to a cafe and a water closet cistern and toilet roll pointing the way to the loos! There was a key pointing the way to a car park and a gate house pointing the way to an admission gate. Brilliant! Further through the park we came across a giant woodcutter man standing about 15 feet tall. He was made out of wood himself. There were risque statues of topless ladies near to the main house. There were deer in the neighbouring field. What a walk we had through Tupgill Park and on leaving Leena and Dave inspected the wrought iron gates. One gate had a Hummingbird, the other a flower, perhaps an orchid. Although wide open they worked out that when shut the Hummingbird's tongue is taking the pollen from the flower. What was this place of magical moments. Only when we had left and were walking on the road toward Coverham did Dave suggest it was Forbidden Corner. He was proved to be right. 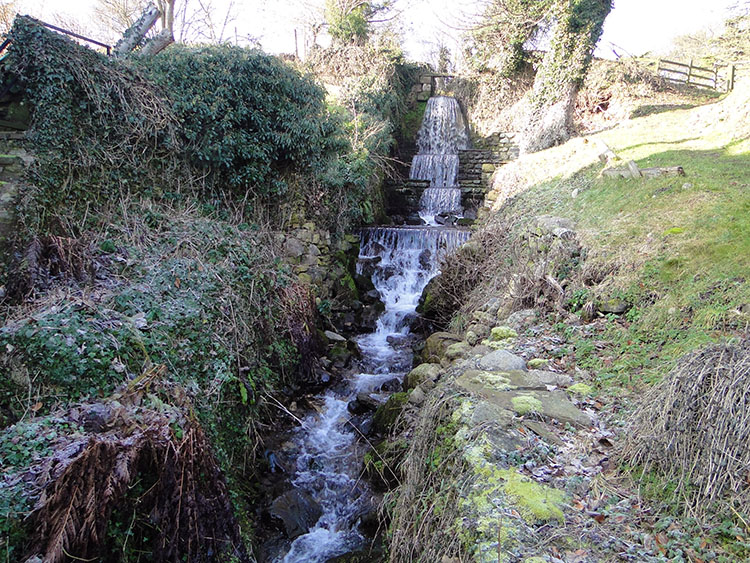 A stream cascading through gardens in Coverham 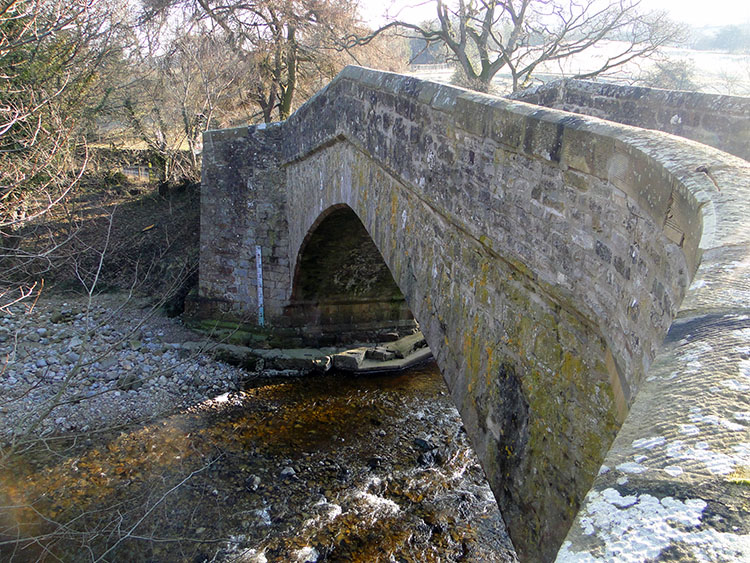 After the delightful time we enjoyed in Forbidden Corner we got on with walking again and soon came to the outskirts of Coverham village. First port of call was the delightful small Church which we walked by on our way through the churchyard to the village. Then we strode on the path beside a cascading stream which disappeared underneath a cottage on its journey into the River Cover. We walked by the cottage and looked toward Coverham Abbey which had been our intention to visit. However the way was barred by a chain locked gate as the ruins of the Abbey now sit within a working farm. On checking the map I worked out we could have visited the Abbey ruins from the north by backtracking through the church but we decided against it. Catching a view of the ruins through the barred gate we deemed that as sufficient and instead we crossed Coverham Bridge before following a course east and south along Hanghow Lane. Part way along the lane we found a wide opening to a field and a gate. Here we stopped for lunch and anticipated the remainder of our lovely walk which would include a riverside section, a stone bridge crossing and two very different castles. 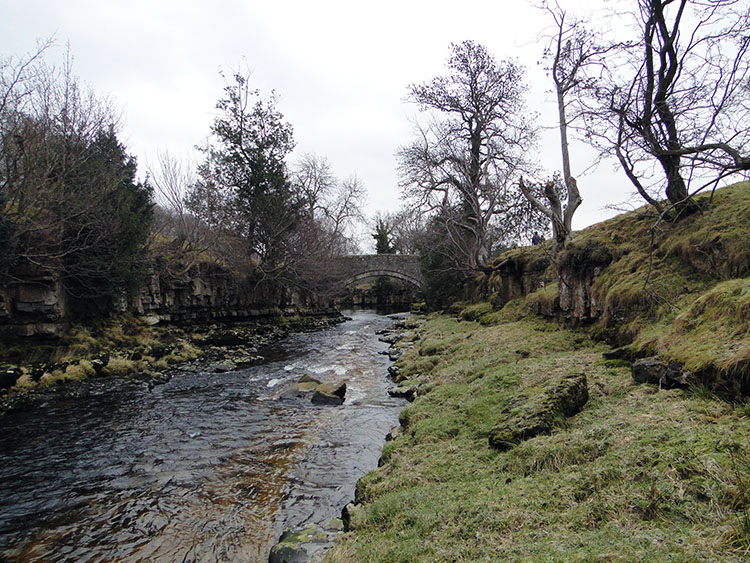 River Cover at Cover Banks with Hullo Bridge ahead 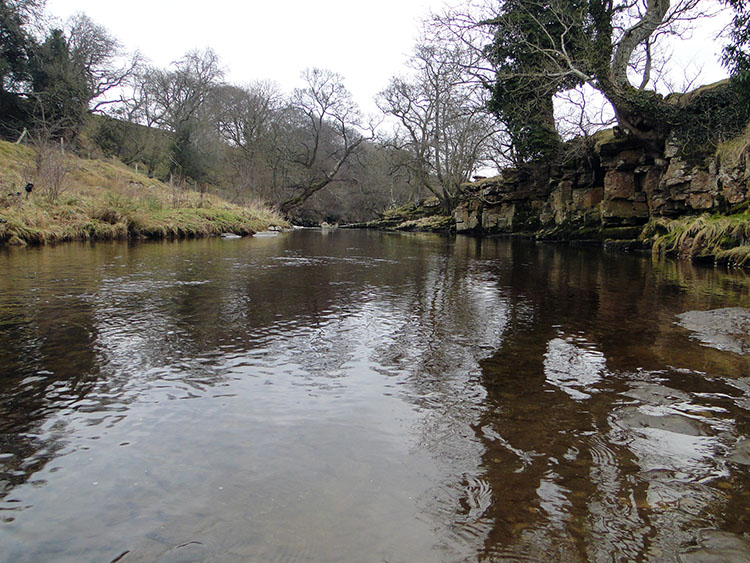 After our refreshments the map showed us continuing along Hanghow Lane east for about three quarters of a mile to just past Cherry Hill Farm before leaving the metalled lane and tracking north down a hill and through fields to Hullo Bridge which would allow us to cross to the Middleham side of the River Cover. We were happy with that as we walked on for the views were good with wide expanses north with a descent to the river in our immediate eye and the hills separating Wensleydale and Swaledale beyond. To the south was a high bank with a clear line of frost showing where the sun could not get on its low winter trajectory. Soon though our kilometer long walk on the lane was halved as a new access sign invited us on a permissive path down to the river which would allow us further exploration of Cover Banks, a course of rocky riverside outcrops. We took the option immediately and walked with vigour down to the river. Our food break was helping now and we all excitedly reached the riverside with Dave and I descending down to the waterside to view at river level. Straight ahead was Hullo Bridge, a stone structure with a perfect arch. Looking at the map I worked out the bridge was once a highway for workers taking lead from a now disused mine to Middleham. Now it is a quiet sentinel on the river, quiet but extremely proud. This has to a place for picnics in summer, the surroundings suggest so and I am sure locals avail of the tranquil setting. For us, it was a place of passage as we made our way across the bridge. 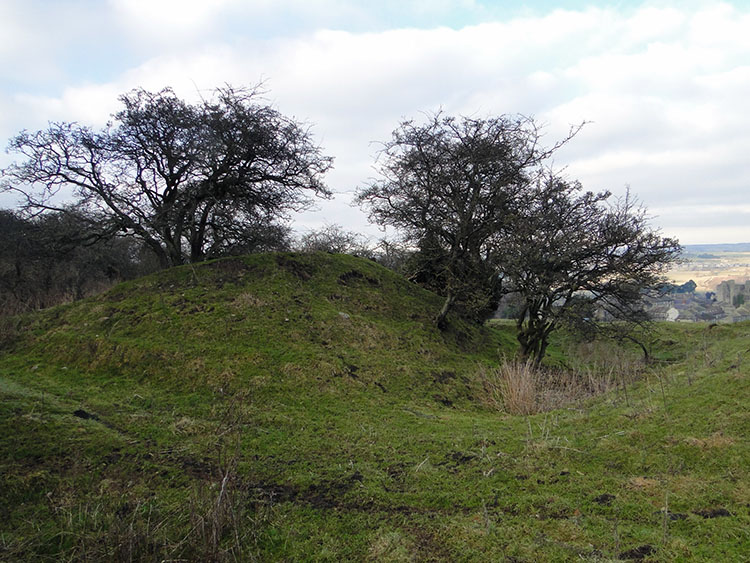 Site of the original Motte and Bailey Castle Near Middleham 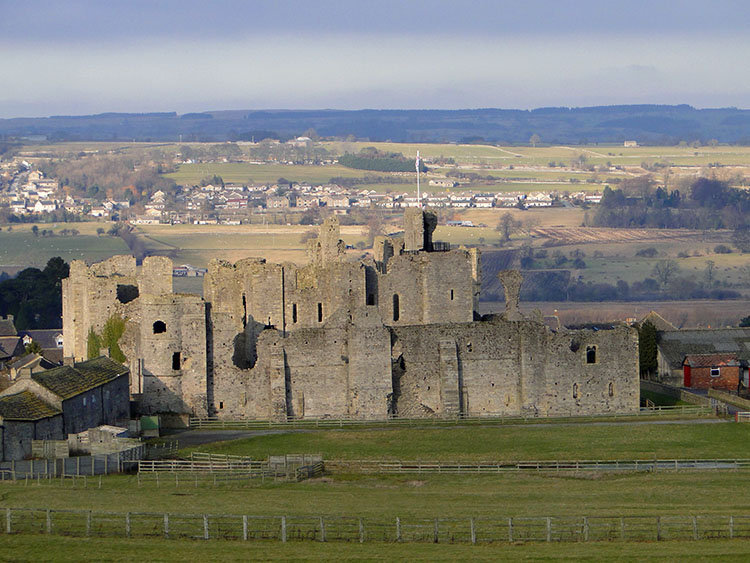 Middleham Castle is now sited lower than the original

Once up the north bank of the River Cover we were on our final stage of a great short walk. We strode out walking north east across a huge field and then passed though a gate into the final field of the walk from which if we took a due north path would take us straight past the west side of Middleham Castle and back to our starting point. However I had mapped a very interesting feature near us and I just had to veer off course and north west to inspect it. The map showed a mound of earthworks and on the Explorer map I had with me it was described as William's Hill Motte & Bailey. We walked straight to it, a site of several raised mounds and ditches with a small lake formed. At just 300 metres in distance and 35 metres higher than the present Middleham Castle, we were on the site of William the Conqueror's first castle in Middleham, a simple Motte and Bailey construction which had to suffice until a stronger permanent defensive castle could be built. Imagining what it must have been in the time of building these castles I stood for some time taking in the atmosphere. I watched Dave and Leena explore the Motte and Bailey then wander down to the main castle. I was in delight. Eventually I moved myself down the hill and out of the field to beside the stone castle and surrounding buildings. We three regrouped and ambled through the village back to the car. Exploring the village's streets was a good finale as was the walk close by the castle main gate. Middleham Castle is an impressive structure with lots of the original features still intact. Eventually we drew away from the castle and back to the car in the village square. We were done and all very pleased. If the walks I do this year provide as much in beauty, interest, exploration and imagination as this walk has then I will be well satisfied.