Subtitle: The walk that never was!

Summary: This walk in Upper Wharfedale is a very popular one which visits three of the valleys prettiest hamlets. First is Buckden, sheltered to the north by Cray Moor and to the east by the massive upland bulk of Buckden Pike. Next visited is Cray, reached by way of Buckden Rake and an interesting small waterfalls walk. The final hamlet on the circuit is Hubberholme, the favourite dales village of literary giant JB Priestley. The George Inn was where he could often be found when visiting the area and the church is where he chose his final resting place. This walk could be started from any of the hamlets, all having well renowned hostelries to enjoy refreshments at the finish of the walk. We chose Buckden for reasons which will come apparent in the story of the walk.

The Walk: After a Saturday night out touring the pubs of Horsforth near Leeds our plan was to get up early on Sunday morning and drive the 40 miles, one and a bit hour journey into Upper Wharfedale and to climb from the valley to Buckden Pike. The team was the usual walking trio of me, brother Dave and our best pal Steve. Afterwards we would circuit in a clockwise direction, descending to Starbotton and follow the River Wharfe upstream back to out starting point in the hamlet of Buckden. That was the plan and true to form we were up, all of us a little groggy from the night before, but all dedicated to the walk. All keen to clear our heads and get the job done. These were the early days of my walking resurgence, the early 1990's. The days when I improvised with walking gear, not having a clue about the proper walking gear. Study the photographs; only Steve has a backpack. None of us had what one would call the preferred walking gear then. It looks like Dave and I were in corduroy trousers. My coat was one of those old heavy grease-coats which weighed a ton when wet. I had just been persuaded by the lads to stop attaching plastic shopping carrier bags to my clothing! Those were the days. Anyway, despite it being an overcast winters day we reached Buckden at around 10.30am in the morning. It was dry. 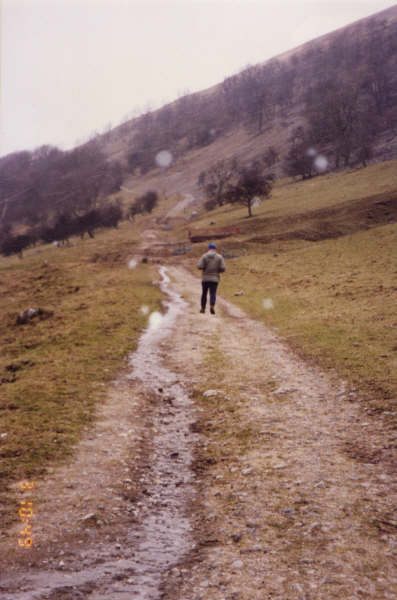 Climbing the path up to Buckden Rake 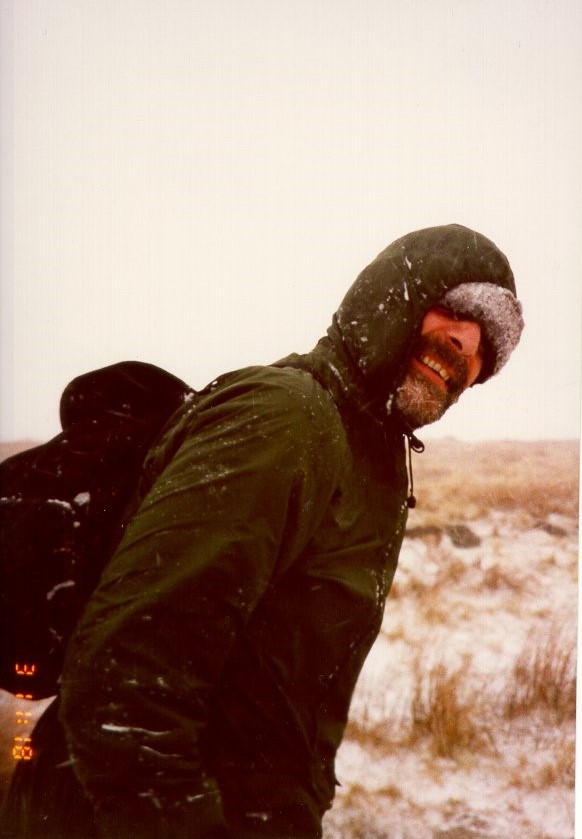 We soon changed, packed up and set off. After all it was only a matter of changing boots, stuffing sandwiches and drinks in pockets and putting on hat and gloves in those days for a winter walk. Steve, being the stalwart he was, carried the hot flasks in the one and only backpack borne by the team. On we went, climbing up the farmers access road to Buckden Rake. We had not been walking more than five minutes before the first flurries of snow began to fall. "It was forecast to snow a little bit" said Dave. We continued on regardless, resolutely soldiering on and upwards, through the first of the managed access gates and into the shelter of the cut through Buckden Wood. 1992. Steve had entered the golden forties. Dave and I were still clinging on to our naive thirties. Oh gee, everything was possible then. Or so we thought. When we emerged from the shelter of Buckden Wood onto the exposed section of Buckden Rake the flurries of snow got bigger. And more frequent. "It's going to snow a while" Dave predicted. "It is going to be fun" I stated. "Let's keep going" Steve declared. 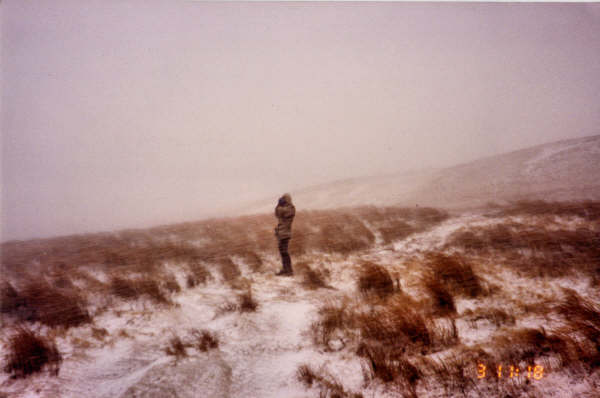 Taking a battering on the climb to Buckden Pike 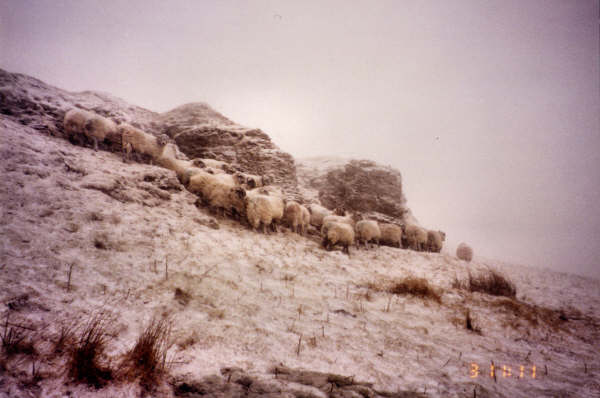 Sheep on the retreat

And on we went, leaving the Buckden Rake path at 370 metres, ascending upwards towards Cow Close. We climbed slowly and steadily across the enclosure fields on the middle levels of Buckden Out Moor. Soon we lost sight of the Upper Wharfedale valley below us to the west. It was shrouded by the mass of white descending all around us. The gentle snow storm of a short time earlier was gathering pace quickly, increasing in volume to a ferocious snowstorm. First it had trickled out of the calm sky. Now it was blowing a gale and the snow was coming at us from forty-five degrees. It came from eastwards and blew into our faces as we climbed. Now we were having to stop and turn our heads on occasions to relieve ourselves from the assault of speeding ice crystals smashing into our unguarded faces. By the time we reached Cow Close, only 70 metres higher than when we had left the Rake and at 450 metres still 250 metres from the summit of Buckden Pike we were having doubts on whether we could complete the climb. Would it be our first ever abandon of a walk? Then it happened. That moment when we realised retreat was the best course of action. As we stood summarising our situation a thunder of hooves came down the mountain. The sheep of Buckden Out Moor had made their decision. They were coming down. In flock they assembled behind a sheltering gritstone outcrop and stood fast, all huddled as close as they could to each other. "Well that's settled it. Let's get down and improvise a low walk" suggested Steve. Dave and I immediately agreed. 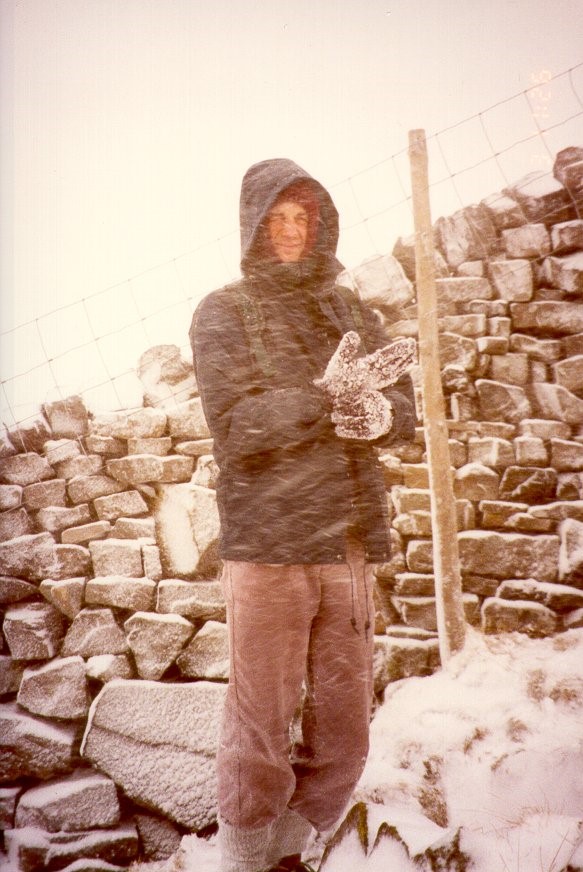 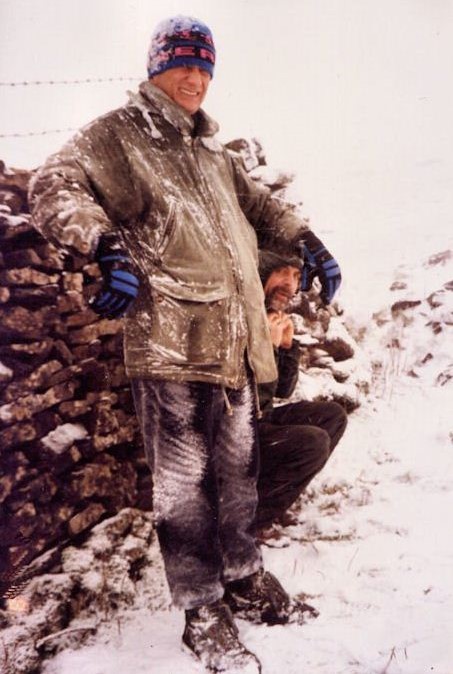 The descent was not easy though. First we followed a wall line directly down to the Rake, still being battered by the fury of the snowstorm as we did so. As soon as we got back to Buckden Rake we took a break to recover from the substantial effort needed to walk the storm. It was still howling, wind forcing spikes of driving snow into us. Our clothes were covered in snow and snow melting into the fabric was making the protective gear heavy. My coat was particularly sodden and very heavy making it an uncomfortable ally. Nothing was as protective as the waterproof, windscreen materials of today. Not quite as cumbersome as that walking gear for Mallory and Irvine in the fated 1924 Everest expedition but not a lot better. We took shelter for a good 15-20 minutes before continuing our way. In that break-time Steve had mapped the new walk, a descent to Cray, a crossing to Hubberholme and a walk back to Buckden following the Dales Way. "That should be good" said he. Nods all round, thumbs up. 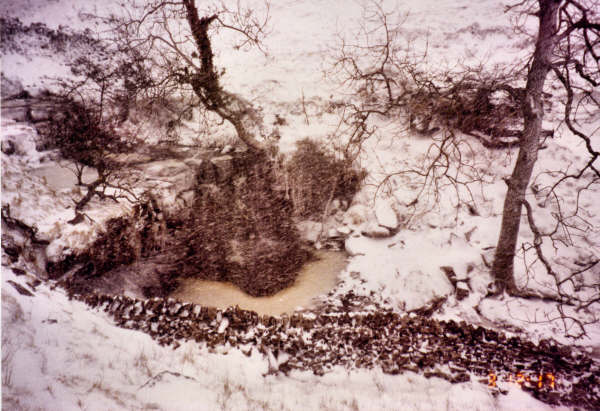 Shelter from the snowstorm at Cray Gill 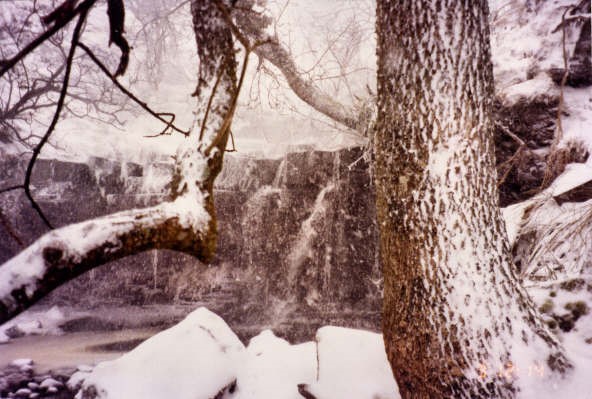 In the bleak midwinter

The snow continued to fall heavily. Thankfully, mercifully even, it was not as driving as we got lower and the shelter of the woods, copses and hamlet dwellings provided shelter from the wind which fuelled the storm. The snow was deep in places though and our feet often fell through drifts of it to knee high which was a strength sapping experience. By the time we had reached Cray Gill it was time to shelter and eat some lunch. To be hunkered down by a drystone wall, wind free and taking refreshment was such a joy. Not that we could linger long. It was cold. We were all wet, damp having got through or clothing to chill our skin. As soon as lunch was over we continued, reaching Hubberholme, the prettiest of hamlets loved by the three of us but not lingering. We were determined to finish as quickly as possible and end our walk by drying off in the pub. As we followed the Dales Way path from Hubberholme back to Buckden we so hoped the Buck Inn was open. And thankfully it was. We marched into the pub and found ourselves to be the only ones there. Apart from the landlord who welcomed us in the most friendly manner. "Have you lads been out there. Walking. Surely not?" said he. After telling him we had we ordered a beer each and without prompting he told us to go and sit be the open fire which was roaring and warming. We sat down as close as possibly and took off our coats to dry. Puddles formed around us as the coats and our still worn clothes dried. Luckily it was a hard floor. My word we felt good.

(A footnote: The beauty of this walk, despite never being able to complete our original route, is the memory of it. I shall never forget it. I cherish the memory of it).