Summary: The New Years Day walk of 2018 was to a remote area of the Yorkshire Dales which I had never been walking before. In fact so remote was the moorland that I was walking for the first time that it was not in Yorkshire at all and actually in Cumbria. Setting off from the village of Barbon in the company of Tim, Adam and Thomas we climb via Eskholme Pike to Castle Knott and then across open moor to Calf Top, 609 metres high on Middleton Fell before descending to Calf Foot, continuing on to Mill House from where we walk the country road back to Barbon. 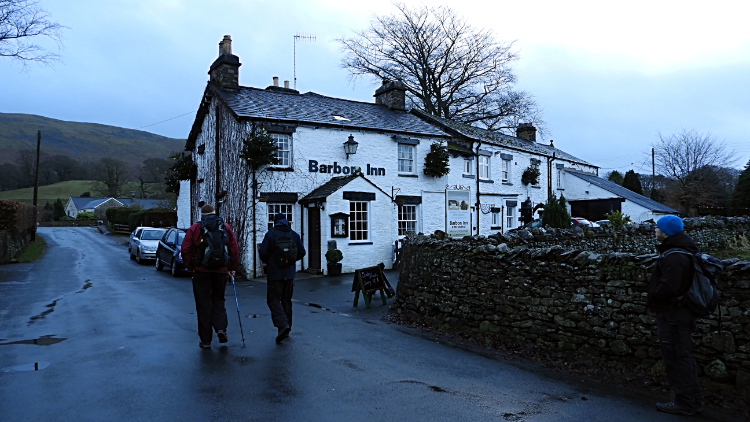 Passing Barbon Inn on the way out of the village 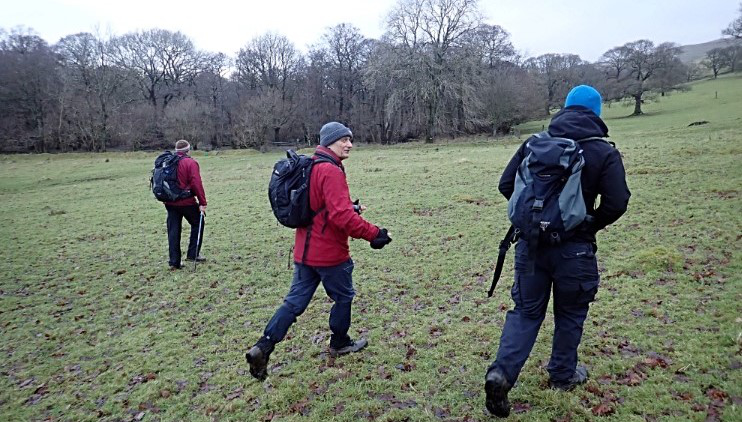 Heading across Barbon Park to Eskholme

I travelled the sixty mile, one and a half hour journey from home to Barbon in the dusk of the first morning of 2018. As I drove and looked at the brooding sky full of cloud I thought to myself "At least it is dry, the fourth year in a row now". A good walk on New Year's Day was becoming a tradition. Soon after arriving in Barbon at 10.40am I spotted Tim who was joining me on the New Year's Day walk for the fourth time, since we began the yearly tradition in 2015. This time Adam and Thomas joined us too, their second appearance. Eleven o'clock was the set time for the start of the walk and we set off from the memorial cross in the middle of Barbon at precisely the hour. Though it was approaching lunchtime it felt very early in the morning. Houses we passed in the village had their room lights on. From the village we crossed Barbon Park, edging close to Ellers Wood on the way to Eskholme from where we began the serious climb which was to be relentless for 400 metres of ascent over the next mile and a half to reach a cairn on Castle Knott. 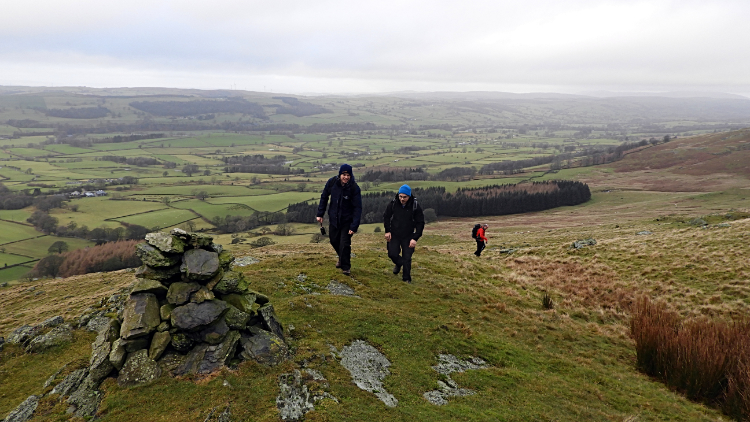 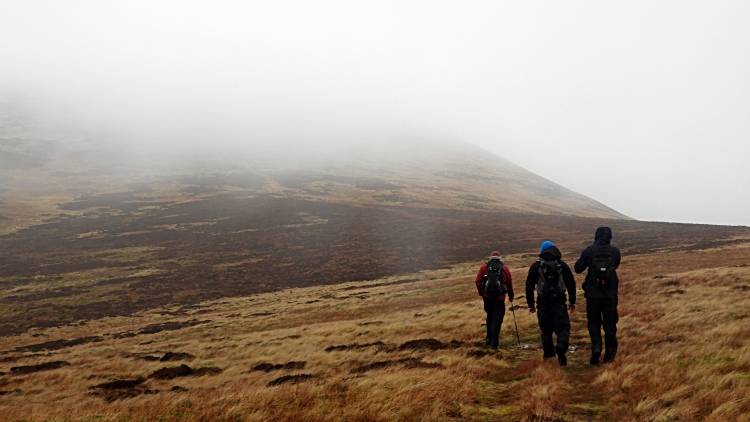 Into the mirk while climbing to Castle Knott

The climb into cloud, which was waiting up there for us at around the 500 metre mark, was a relentless slog on narrow and ill defined paths. The ground was good, the grass kept short, and so people would put their heads down and fitness their way up on any path they chose to take. It seemed that way as we could not find a well trodden path. What we did find though, after a good half hour of climbing, was the cairn marking the suitable resting place on top of Eskholme Pike. Here we met up for a short break to look back at the views unveiling below in the Lune Valley. The River Lune, on its 53 mile course from Newbiggin in Ravenstonedale to the Irish Sea, passed by, flowing north to south down below and though not breaking its banks it was quite full of winter rain. Despite the clag the view was of beautiful pastoral countryside with Barbon the only habitation of any size in sight. The only other dwellings on show were farms and they were sparsely spread. It was a lovely wild view to start off the new year with. Turning around, we saw another wild scene and one of the unknown which we had to walk right towards. The mystery of what was waiting for us in the cloud. 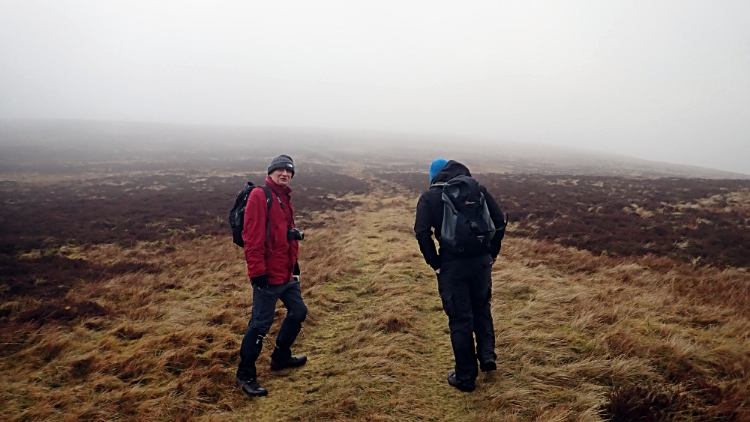 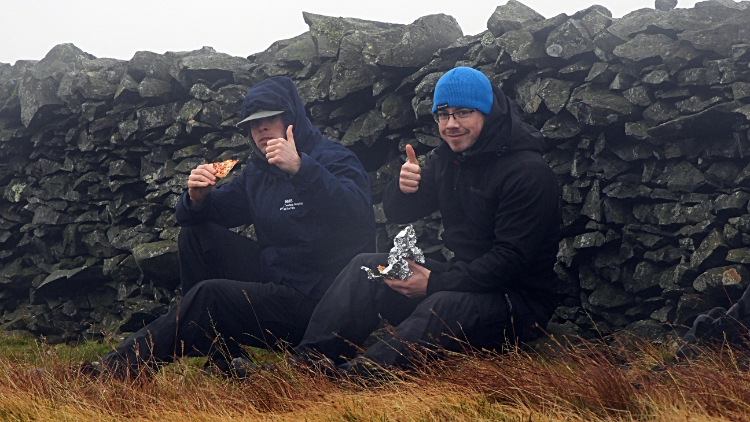 Tucked in for lunch near Calf Top

The climb from Eskholme Pike to Castle Knott, in which we gained 230 metres of height over two kilometres of walking saw us losing visibility with every stride. At first we could see down into the Lune valley and even when we touched the 400 metre mark I could vaguely see down into the Barbondale to my right. If visibility had been better I may have been able to track my route on the high hills beyond Barbondale to the east, the great massif of Crag Hill, Great Coum and Gragareth. It had been a good day up there. Still, it was a good day up here, in the brooding cloud which was now enveloping us. It gives the walk the primeval feel I love when out on a wild walk. Anyway, as soon as we were walking in the restriction of thickening cloud Tim decided it was time for some gardening. "Gardening?" I asked. "Yes, I am attempting to create an new orchard. Should my son walk up here in a generation's time and find an apple tree then he could say.... my dad planted that". Then he took four apples from his backpack and them them, one to each cardinal point. Good lad. After the planting we came to and passed the small cairn marking Castle Knott before bottoming to a small dip at the head of Millhouse Gill and climbing again, this time for 130 continuous metres to the summit of Calf Top, highest point of the whole Howegill Head and Middleton Fell range. It was time for New Year's Day lunch. 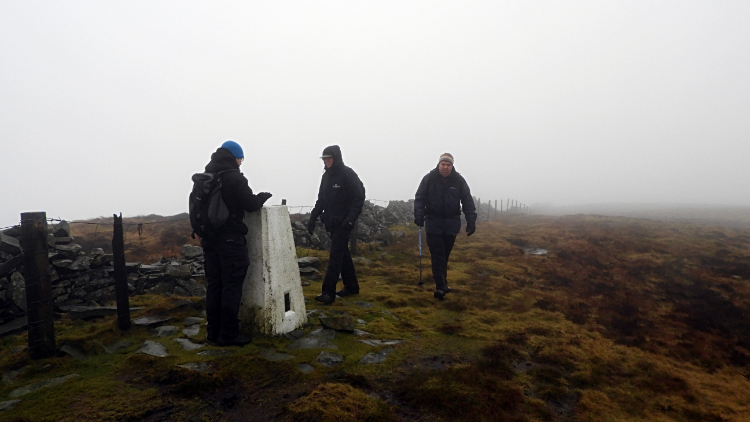 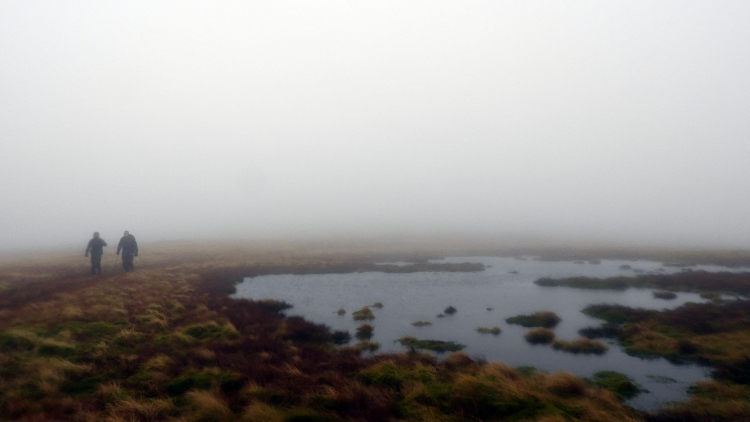 After the sandwiches and Christmas Cake which Tim and I traditionally bring on the New Year's Day walk the four of us touched our first trig pillar of 2018, the one on Calf Top at 609 metres above sea level. Had we been Ordnance Survey engineers on a survey we would have had to hang around for quite a long time for their would be no sighting the in-sight trig pillars on neighbouring high ground any time soon. We could not even see 50 metres in front of us which made our skills in map reading and orientation useful. (Not withstanding I had my GPS unit plotted anyway!). And so, with our first upland climb of the new year bagged off the four man team turned to a course due west, heading from Calf Top to find the path leading off the fell from Calf Foot to Mill House. On the way we passed a small body of water not marked on the map which would not be disappearing anytime soon. Tarn, pool or puddle? Around here, just west of the trig pillar the terrain was wet, a wide area of soak providing the water source for the series of gills flowing from the fell to the Lune valley. Namely, north to south, these are Luge Gill, Wrestle Gill, Thirnbeck Gill, Millhouse Gill and Ashdale Gill. 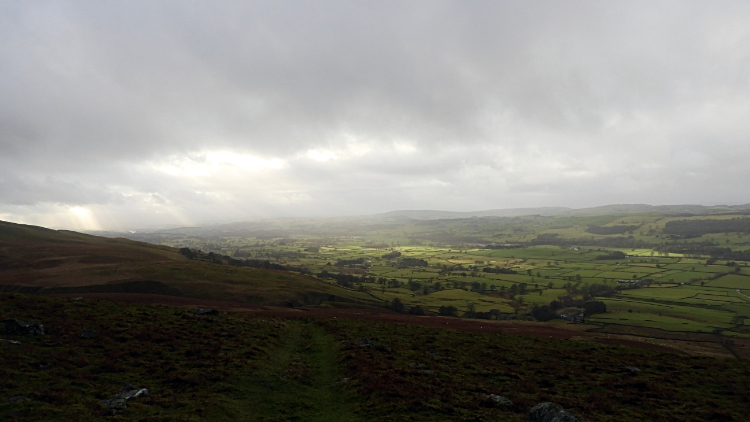 First glints of sunshine in 2018 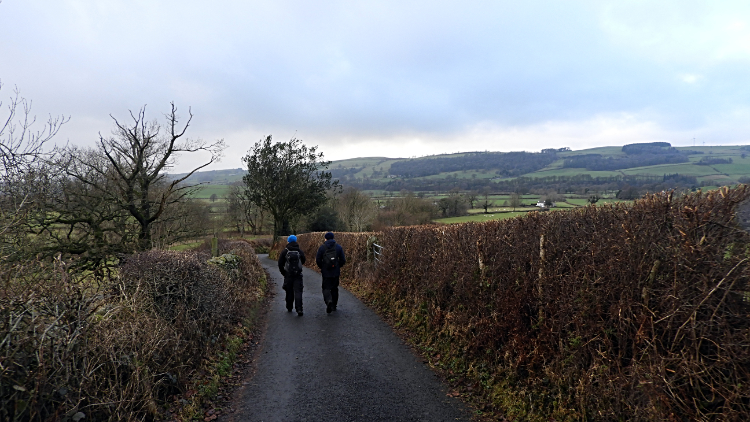 On the quiet road back to Barbon

The walk down was easy though steep at times. Getting out of the cloud and into the light was good though for as we emerged from the cloud we enjoyed fine views of the first afternoon of 2018 in the Lune valley. And it was a spectacular one as the first sunshine of the year was breaking through the cloud, like spotlights on a grand stage. And what stage could be better than this natural one. It was quite a sight to behold. After taking in the views for a while the four of us continued down and off Middleton Fell by way of the Millhouse Gill path to Mill House, the last habitation before the moor. The graft done, we four had fun chatting about nothing in particular and talking about grand walking plans for 2018 while ambling along the traffic free country road back into Barbon. "Cheers lads, that was a pleasure".