Summary: I enjoyed this walk with my wife on a nice summer's day. The hard work is done at the start with a climb from the village of Hebden to Edge Top by way of quiet roads, farm access lanes and bridleways to Edge Top, 120 metres gain in all (180m to a little over 300m). Then the walk descends through pasture fields and lanes into the small market town of Grassington, the ideal halfway spot for a break. Then it is down to the River Wharfe for a lovely two miles walk along its north bank, including a river crossing by stepping stones (which can be avoided - alternative route provided). The finale is a short climb back from the river by way of Hebden Beck into Hebden. 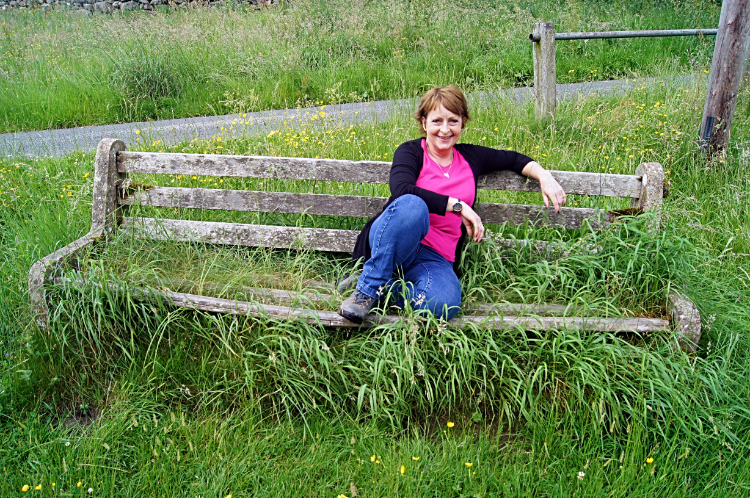 Lil and the rickety bench 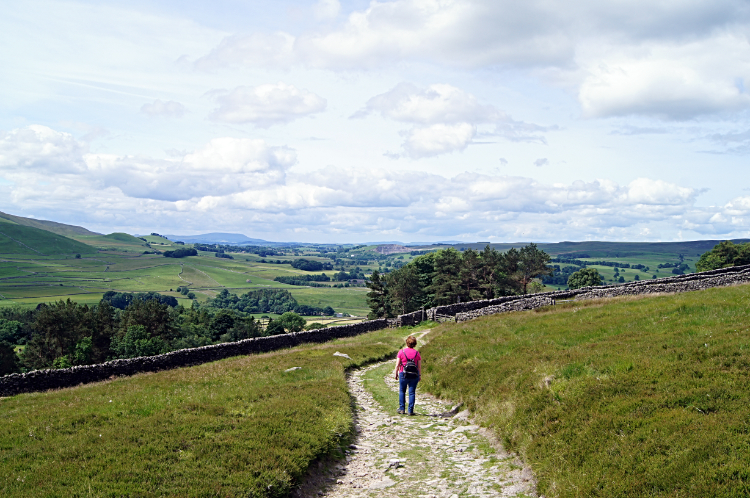 A few days after the longest day of 2017 and with a promise of sunshine on a warm day. The opportunity of a walk was irresistible and being a Monday Lil was available, having converted to a three day Tuesday to Thursday working week so we could do exactly this kind of thing. It would have to be fairly local to us, it could not be too far and with not too much climbing. They were Lil's rules if she was to join me and I sure wanted her to. So after looking at the map over breakfast and showing her the route she gave me the go ahead. At 10.30am we were heading off, walking north from outside the Old School Tea Room, carefully crossing the B6265 Pateley Bridge to Grassington road and climbing steadily up High Green, the tarmac dead end road leading to Hole Bottom. On High Green we could see Hebden Beck trickling down from Hebden Moor on our right. We would be walking beside the beck later. For now, after taking a brief respite on a rickety bench with grass growing through the wooden slats we headed up the farm access lane to Hole Bottom and continued the climb along the track towards Tinker's Lane. The sun was out by now, the day warming nicely. 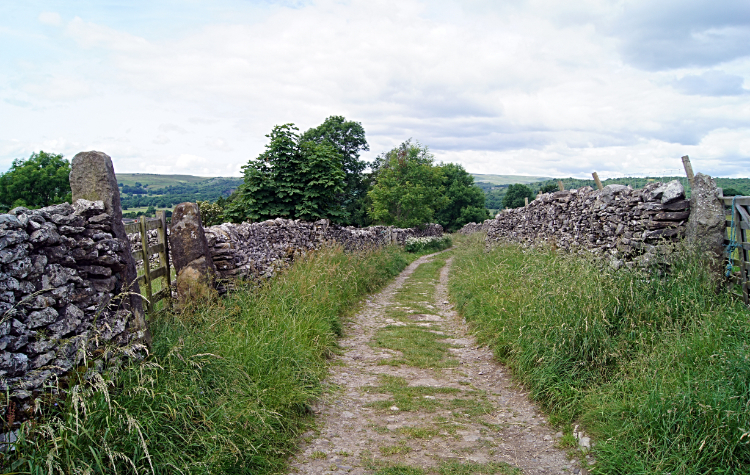 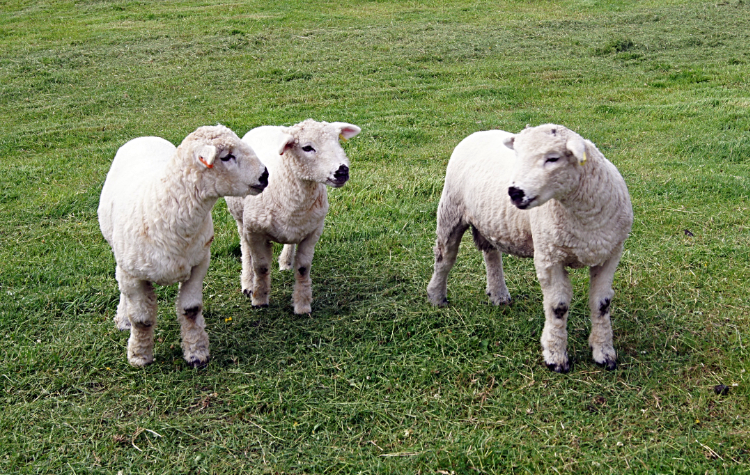 Reaching Tinker's Lane was nice, especially for Lil, as we hit attained the high ground at around the 300 metre mark. This high altitude provided us with attractive views down to the Wharfedale valley ahead of us in the south. We were not going down to the valley yet though, instead turning right to follow Edge Lane across Edge Top, in doing so walking past the Freeview TV Transmitter which serves the people of Grassington. The transmitter had a clear view to the pretty market town of Grassington and naturally so did we. I looked closely to the River Wharfe near Linton and spotted the stepping stones we would be using to cross the river later. In the frame directly beyond the stepping stones was the shapely bulk of Pendle Hill, twenty miles away in the south-west. A grass pasture was being cut for silage, farm vehicles all LS Lowry like below us. The picture was perfect. From the transmitter view point we walked north-west on Edge Lane for another 300 metres and then turned left to head down through a series of fields, the first few natural pasture and the final few thick grassed for silage to reach the High Lane bridleway leading directly to the top side of Grassington. In a paddock field along the lane were a Ewe and three lambs. Lil said "How pretty you are" as the lambs crossed the paddock to see her. They were much like Devon sheep, not anything like the hardy local breeds. 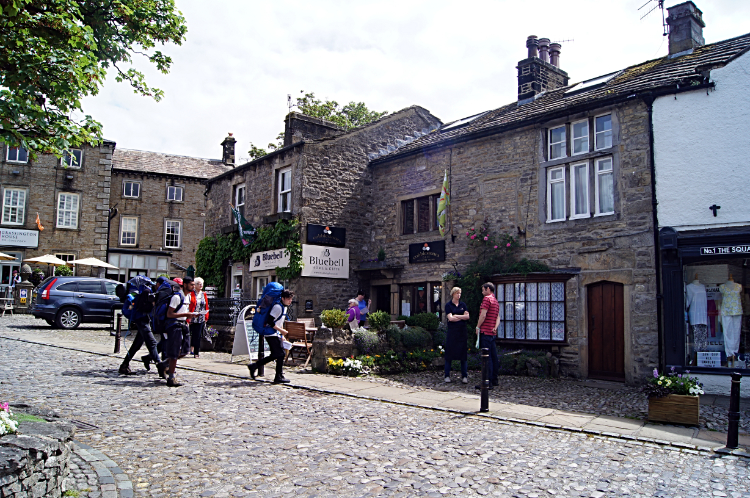 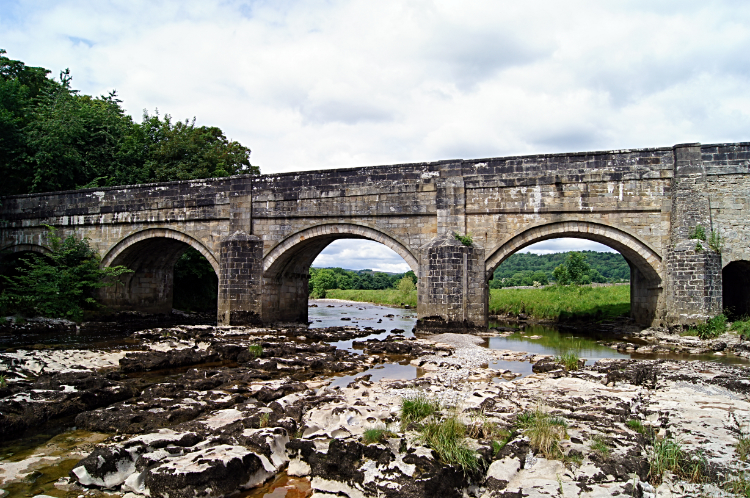 After spending a few minutes pampering the sheep we strolled down into Grassington and after ten minutes or so shop browsing we stopped off at Cobblestones Cafe for lunch. It was the ideal time, just a few minutes after noon. Suitably refreshed we resumed the walk by heading down the footpath along Station Road to reach a gap in the left hand side wall of Station Road bridge, leading us down to the riverside path leading us to Linton. We stopped for five minutes at the imposing four arched bridge which is protected with a Grade II Listed Building designation. The bridge, originally built for packhorse in the 17th century and widened in 1780 has had a number of alterations since including reduction of original hump back and strengthening for substantial lead mine traffic during the industrial age. It remains an impressive sight to this day. While we looked around the scene near the bridge a gang of Geese were having fun in the water. 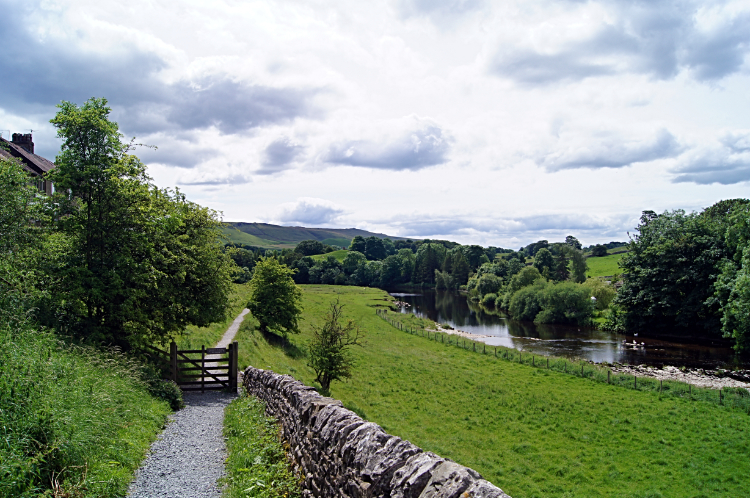 The path to Linton 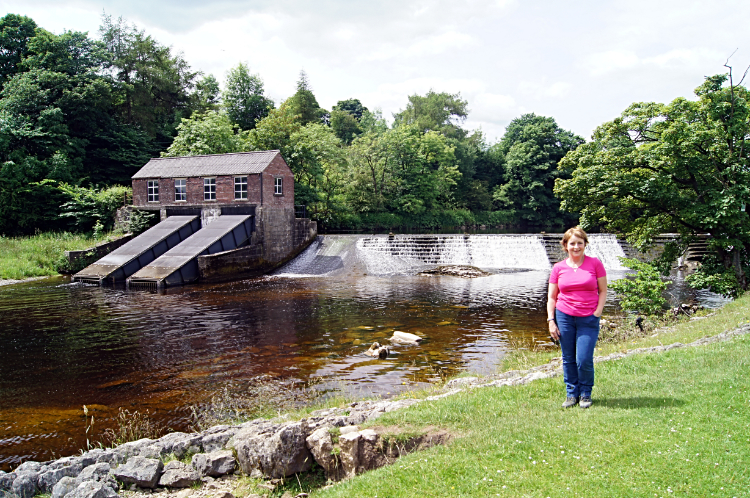 From Grassington Bridge Lil and I walked along the scenic riverside path leading to Linton Falls Hydro. Not a hotel or clinic originally providing hydropathic treatment as the dictionary first suggests this one is a hydroelectric power station which operated from 1909 but had closed by 1948. However, a new operation opened in March 2012 which uses the original building which is now a scheduled monument. With a river wide weir set beside the building it is an impressive site to behold. And we were both impressed to the fact the hydro had been restored and operational again. 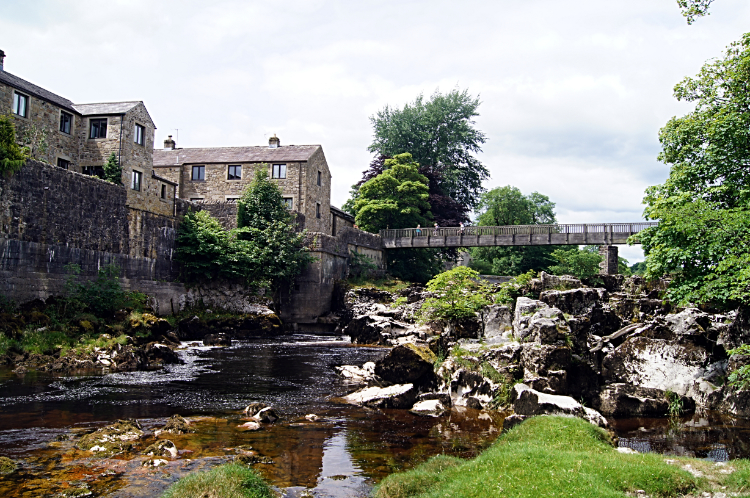 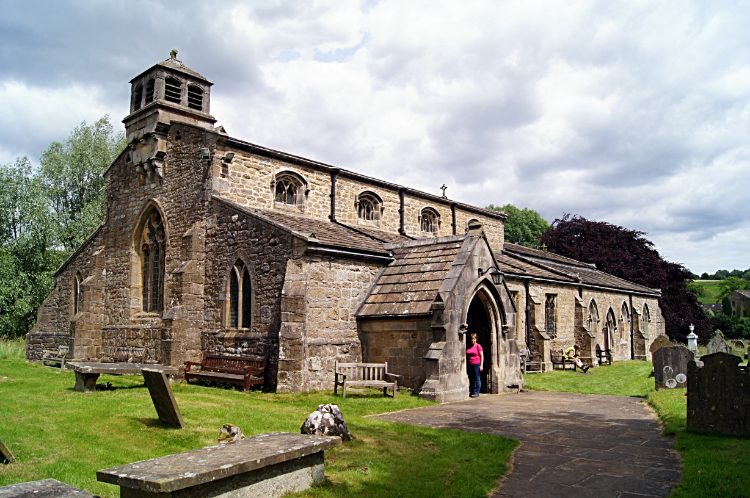 From one impressive sight to another, this time the natural feature that is Linton Falls. Here the River Wharfe cascades through channels of limestone bedrock. It is one of the easternmost features of the Craven Fault, a geological consequence which is the feature of many of my Yorkshire Dales walks including Malham Cove and Giggleswick Scar. If you do a walk in this area which is half muddy and half dry you're probably on the fault yourself. Gritstone means peat and mud. Limestone means quickly draining through porous rocks. Best for a winter yomp. But here and now at Linton Falls in high summer Lil and I could simply enjoy the surroundings and admire the scene. As quite a few others were doing too. Linton Falls is popular and often busy, all year round. I popped down to the water level near the falls by scrambling down a sandbank while sheep watched me curiously. One down at water level I enjoyed a different aspect of the numerous small cascading waterfalls negotiating their way through the limestone gaps. I also noticed Sand Martins swooping into nests within the sandy riverbanks. There were a lot of nests which I had not noticed before. An advantage of being somewhere a bit different. Back up to ground level and reunited with Lil we crossed the footbridge and walked through Linton to reach and walk through the churchyard of St Michael and All Angels Church. It is a lovely looking church. 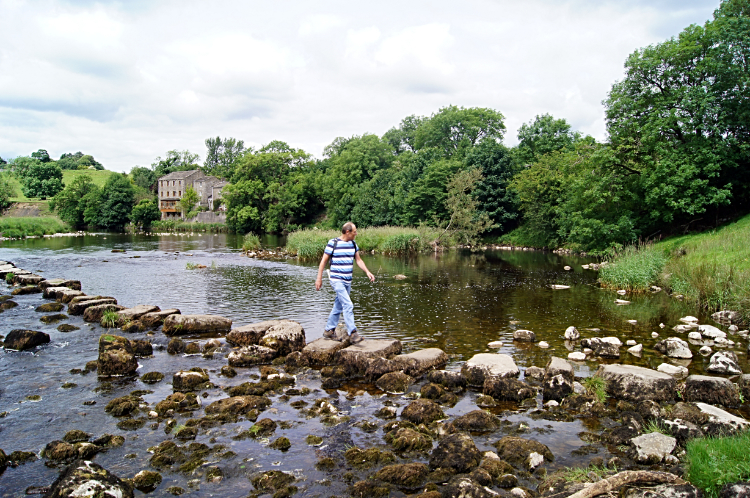 Stepping stones across the River Wharfe at Linton 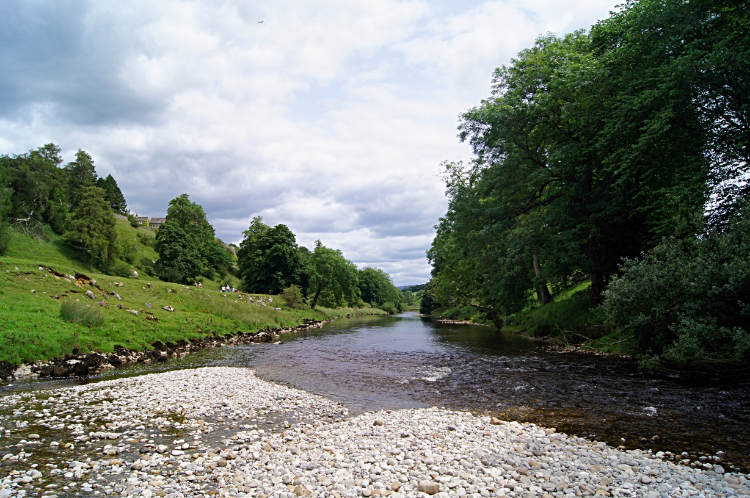 From St Michael and All Angels Church we continued on across a field which led directly to the stepping stones crossing of the River Wharfe on an S shaped bend. As the water was so low and the river benign in a dry spell the crossing of the stepping stones was an easy affair. Even for Lil who would not have attempted it had water been tippling on the tops of the stones. In the event we both had tremendous fun making the crossing. After the magic of the river crossing we continued following the river downstream towards Hebden suspension bridge, now on an amble. It was that easy. And the scenery of the Wharfe and both riverbanks was so lovely it warranted a go slow anyway. 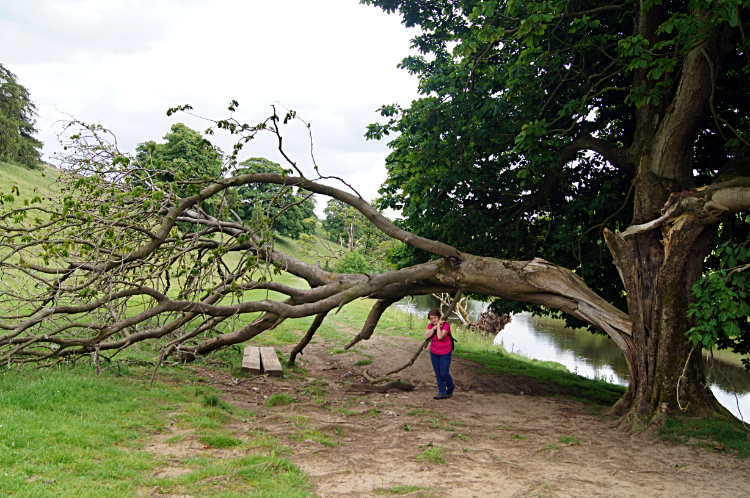 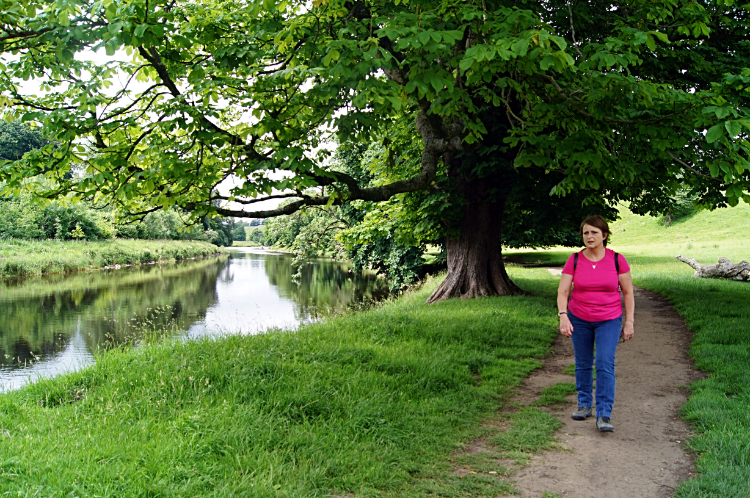 On the Dales Way near Hebden

The path from Linton Stepping Stones to Hebden Suspension Bridge, where incidentally there is another set of stepping stones across the river, is following the popular Dales Way which I have completed in the past. I have also done longer versions of this walk in the past so this stretch was very familiar to me. Even so, new sights and new adventures are always possible on walks and this time was no different. In late February of 2017 Storm Doris and Storm Ewan had occurred four days apart. Together they had felled a lot of trees in the UK and here a few had suffered. Some by the riverside had fallen into the water, flood and wind working together to down them. Others away from the riverbank had large branches sheared off the tree trunks. One created an archway which was just held high enough by end branches for folk to walk through. 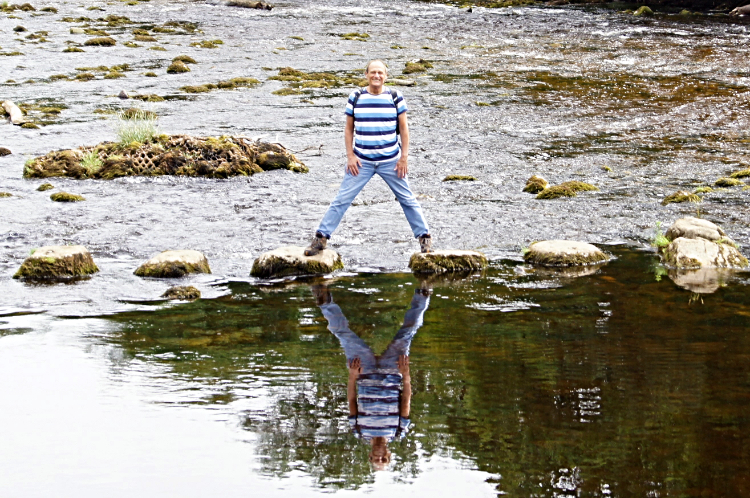 On reflection in the River Wharfe 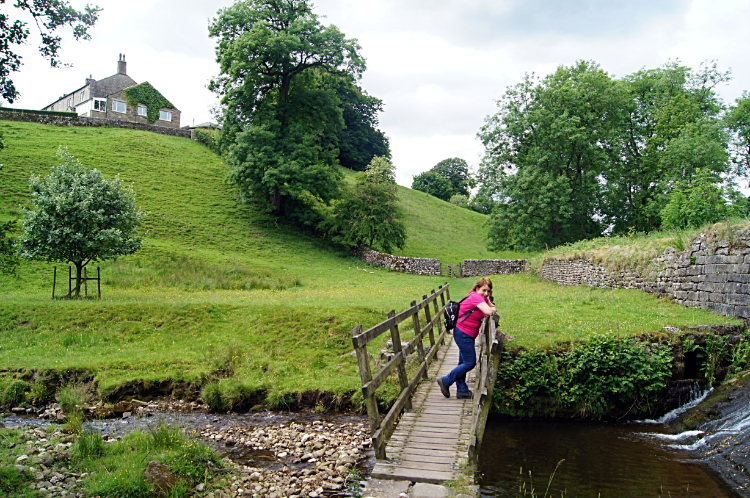 When we arrived at the suspension bridge I just had to cross it to cross back across the River Wharfe by the second set of stepping stones which finished right next to where Hebden Beck discharges into the Wharfe. This time Lil declined the stepping stone crossing, staying beside the bridge to watch me frolic. Afterwards we headed for the finish by first following Mill Lane south-east for a few metres before turning left and heading northwards on a path closely following Hebden Beck upstream towards the village. This final section of the walk was exquisitely nice across delightful dispersed tree glades and beside the trickling waters of the lovely small beck. A final haul following the path up a bank into Hebden and next to the cafe was worth the effort. Especially as we finished off the perfect walk with coffee and cake.