Summary: I cannot understand why it took me over thirty years to do this walk. Since first walking in this area of the Yorkshire Dales in the early 1990's I had always admired the massif of Ingleborough, especially when looking across to it from Whernside and wanting to walk the full range from Park Fell in the west to Ingleborough in the east. Perhaps the other great circular walks of Ingleborough, including ones from Clapham and Horton, the favourite routes of walking books, had influenced me and made me defer to them first. But still it bugged me that I had not crossed Park Fell and Simon Fell for so long. It was time to address the issue. 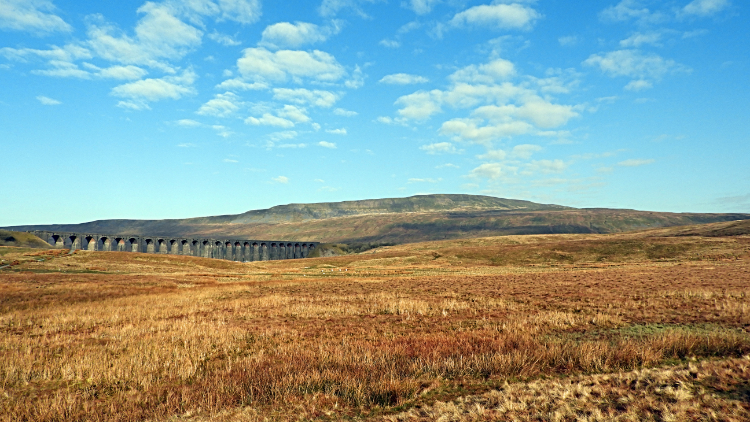 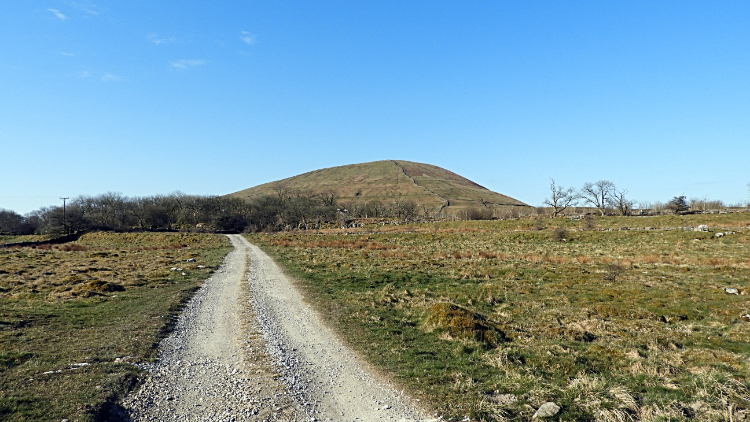 Perhaps it was the short mile of road walking at the beginning of this walk which had put me off for so long. I don't know. I do recall looking for an alternative to the road section but I should not have bothered. And I should not have delayed the walk for so long. In the event the walk along the B6479 Gauber Road was simple and in fact a perfect warm up of the legs for what was to come immediately after leaving the tarmac. The road is wide and straight enough to cope with traffic. Had their been any. As I walked along it at 7.30 in the morning there was hardly any traffic at all. Just a few very early starters like me. Rather than traffic my attention was captured by gangs of Crows foraging in the early April morning and by warming attentively to the new born lambs finding their feet in the road side fields. Just fifteen minutes into the walk I left the B6479 Gauber Road, turning right and heading up a lane, past a row of terraced cottages and across the Settle to Carlisle railway line to reach Salt Lake Quarry Nature Reserve. I was tempted to explore the limestone quarry cliffs and habitat but I wanted to get on to the climb ahead of me. From the reserve I crossed Ashes Shaw Pasture, easing my way up to the steeper climb. 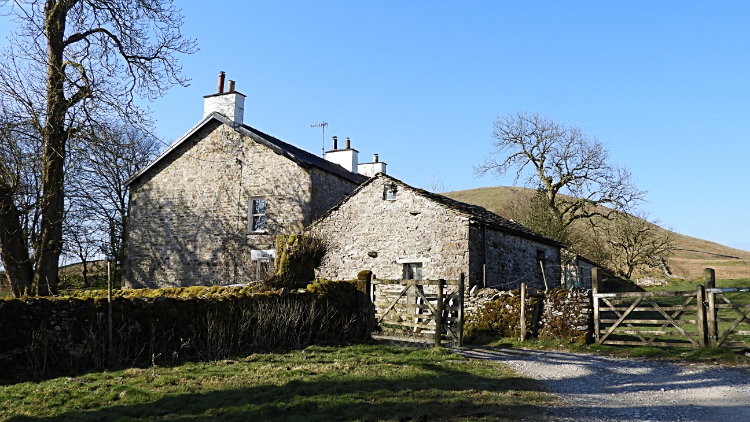 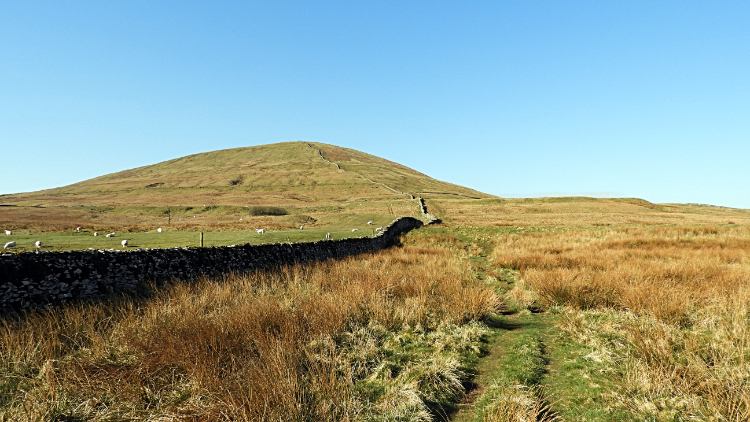 The climb to Park Fell

Having set off from home at the break of dawn I was hoping to take advantage of the promised early day sunshine. And it was delivering. Not a cloud in sight yet, as I passed the buildings of Colt Park and on to the climb of Park Fell. It was a gorgeous spring day. Having just passed the traditional pensionable age birthday I wanted to prove to myself I could still make an appreciative climb easily and so I paced my way up. One hundred steps, short break and look around, one hundred steps, repeat to the top. It is a system I have used for a long time and I hope for some time to come yet. 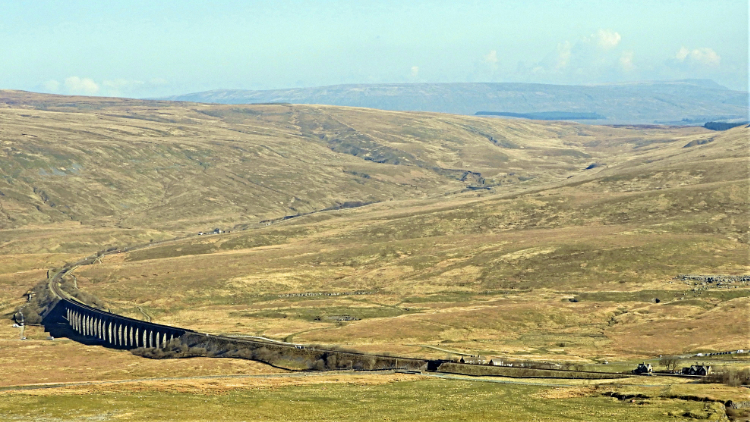 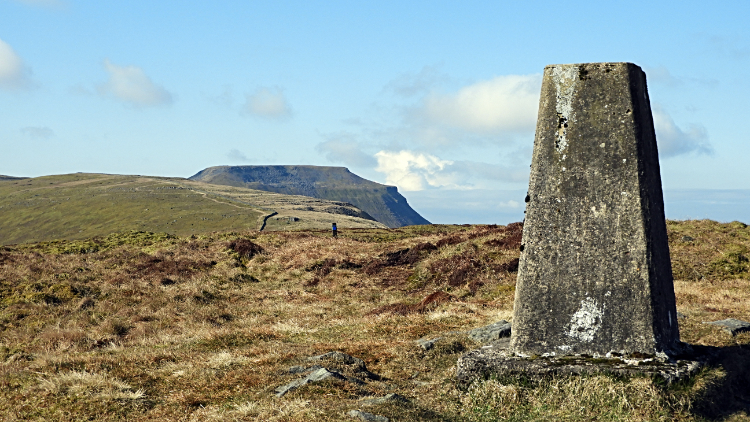 The breaks to stop and look between the steps up the slope were very much appreciated. And very much enjoyed because the views to my right and behind me were equally stunning. The one to my right of Ribblehead Viaduct and Blea Moor showed the sweeping curvature of the railway line and indeed the curve of the viaduct structure itself. It is not a straight build. The view behind was a gorgeous open landscape of the Ribblesdale gap between Ribblehead and Horton with the young River Ribble meandering south. Now, back to the climb. On and up I went, achieving the plus 200 metre ascent from Colt Park to the summit of Park Fell in precisely thirty minutes. I stood at the trig point on Park Fell at eight thirty in the morning. As I had expected, clouds were now forming to the south and assembling over Ingleborough which had exposed its shapely summit for me at the 563 metre trig pillar of Park Fell. Time to crack on, just in case cloud completely filled the sky. 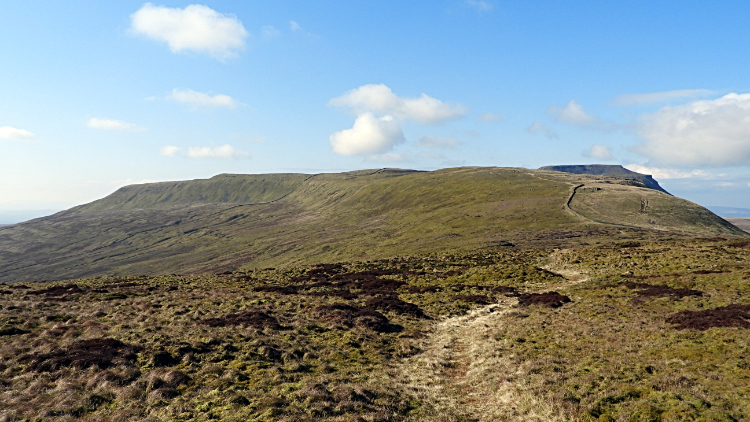 On the path from Park Fell to Simon Fell 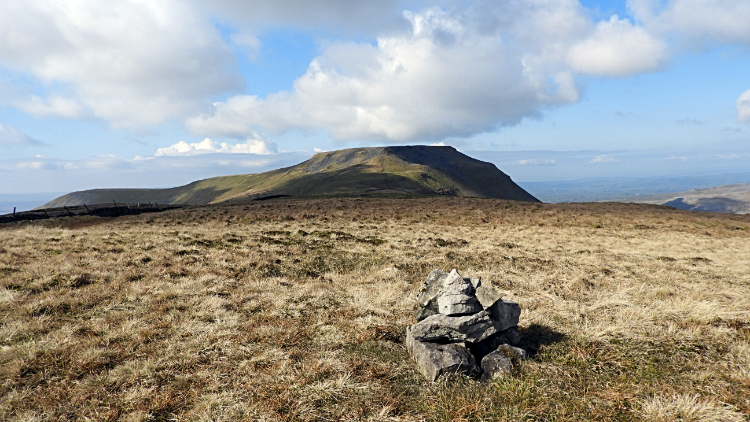 Diminutive cairn on the summit of Simon Fell

As I left the summit of Park Fell and followed the path leading south east towards Simon Fell I noticed there were lots of moorland birds trying to catch my attention. Skylark, Twite, Warbler. All the smaller species nesting were drawing me away from their nest sites by way of hops, steps, jumps and twitters as they went along. I kept to the path anyway, crossing the heart of Ingleborough National Nature Reserve as I made my way down to the low point between Park Fell and Simon Fell and then as I continued upwards past the small outcrop of Black Rock and on up to the summit of Simon Fell which was marked with one of the smallest cairns possible to mark a significant summit. Perhaps the lack of available raw materials on the grassy top explained the reason for lack of a tall structure. Oh, by the way before I move on. The walk from Park Fell to Simon Fell was a brilliant experience. The going was bouncy without giving way, a lovely springy step along in the company of birdsong and with terrific views of what to look forward to ahead of me. Ingleborough tempted me all the way, sometimes by sight and sometimes by hiding behind the breast of Simon Fell. I was loving this walk. Entirely. 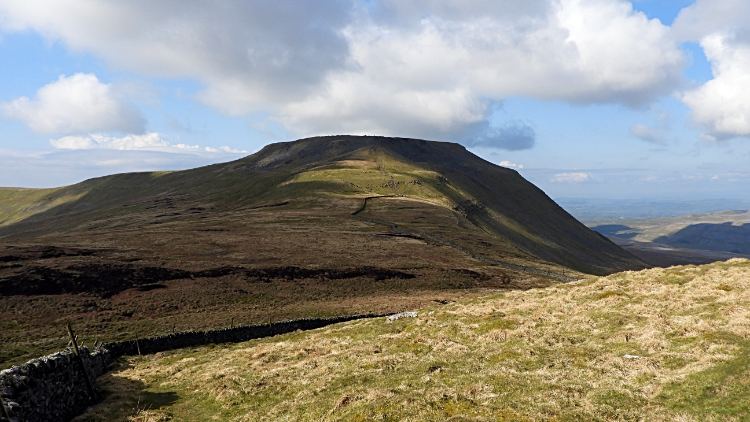 View of Ingleborough from Green Hill 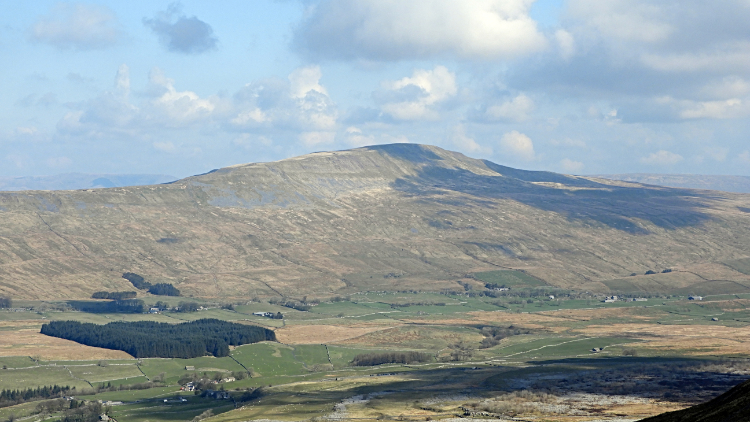 View across Chapel-le-Dale to Whernside

So far I had been on unfamiliar ground and so far I had been enraptured by it all. "How had I not discovered this walk before" I was now thinking to myself and adding the though "What a fantastic view of Ingleborough this is". Not only that "And what a view of Whernside too". It was magic. Though Ingleborough was now being caped by the cloud streaming across from the south west it was still alluring. Actually the shadows cast were an enticing draw in themselves. A moving picture. On Green Hill, a small lump between Simon Fell and the familiar ground of the Yorkshire Three Peaks walk, I took in a final view while sitting down beside a drystone wall for a short refreshment break and envisaged the thrilling climb just ahead of me. 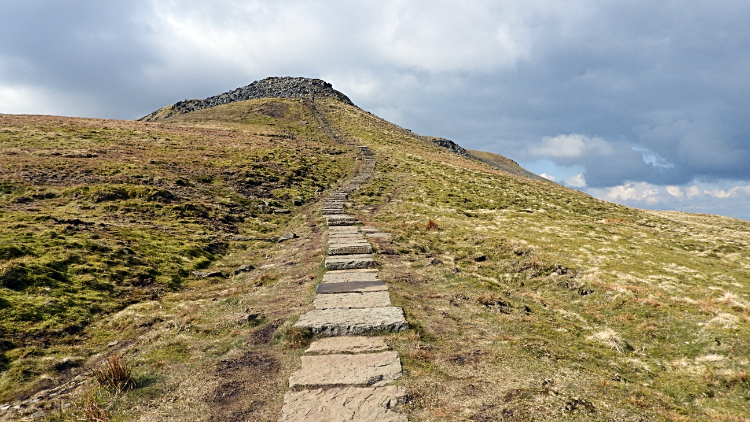 The climb from Green Hill to Ingleborough 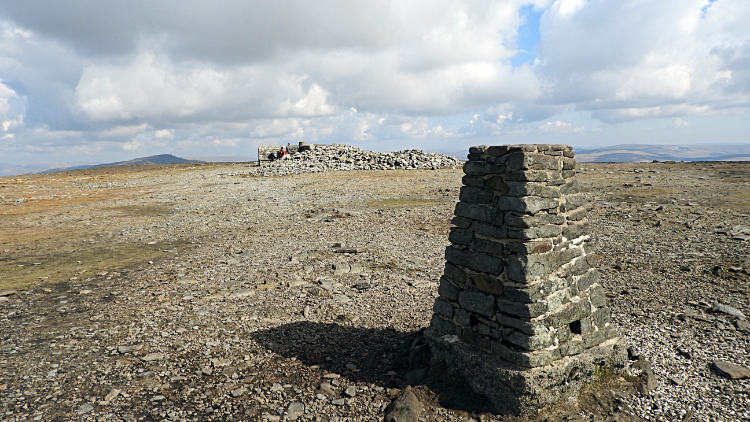 Trig point on the summit of Ingleborough

Up and up I went, now on the known path from beyond Green Hill to Swine Tail at the west rim of the table top summit of Ingleborough. Not having seen anyone at all to this point I was now meeting and greeting other walkers. No doubt some were early starter Three Peakers but most were in no haste, enjoying the thrill of being on the climb and achieving the reaching of this most famous summit ground in the Yorkshire Dales. Ingleborough is a celebrated well known mountain which has been the aim of travel for millenia. Iron Age people lived up here and they will not have been the first to enjoy the tremendous atmosphere of the mountain top which can be made shelter within the middle, as is evidenced by the purpose made all directions shelter made available for us today. It was just 9.45am for me here this time and I was not the first up to the top. Some had already been heading back down as I had climbed..... 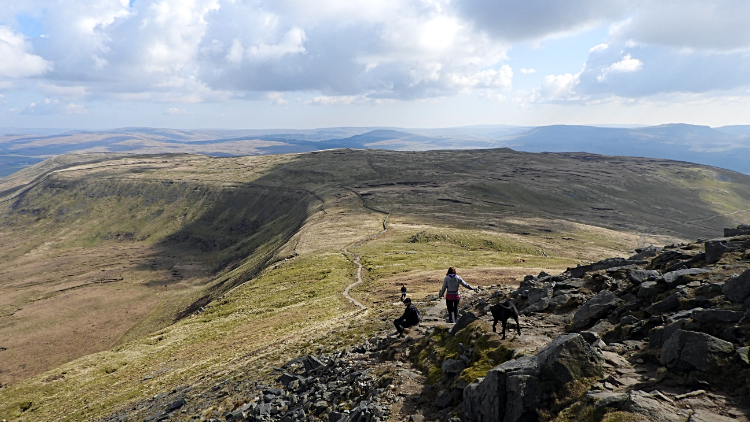 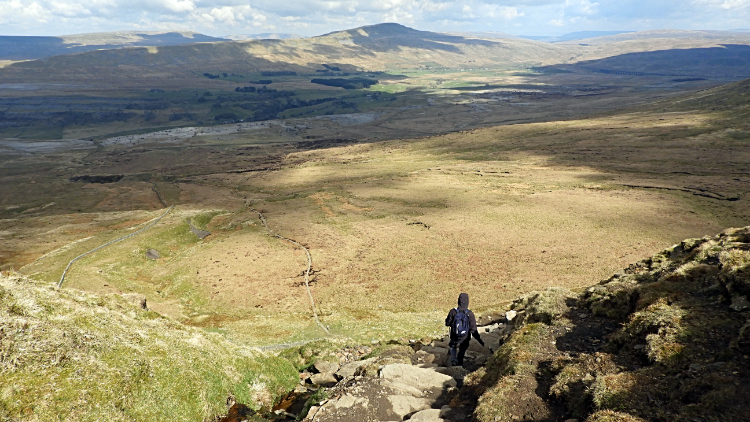 The steep descent to Humphrey Bottom

..... and some were heading up and I descended back down the steps by which I had ascended to Ingleborough. Not that I was in a hurry to get back down. A couple of times I stopped. Once to wait for a group of walkers passing me on a narrow section of the path. And once just to gawp at the awesome view of the Ingleborough upland stretching away to the north west. That of Green Hill, Simon Fell and Park Fell which I had previously looked upon in mysterious thought and which I now looked upon as a familiar friend. "Superb". Then, from dreaming of the great view I focused my mind on the task ahead. The hardest part of the walk and that requiring the most attention to detail was now facing me. The steep descent to Humphrey Bottom. It is never easy. And it is never fun as attention to detail on where to place the next step is so important. Many a folk have twisted an ankle and worse on the precarious path leading down. Or up. Depending on which way you're going. This part is never to be rushed. 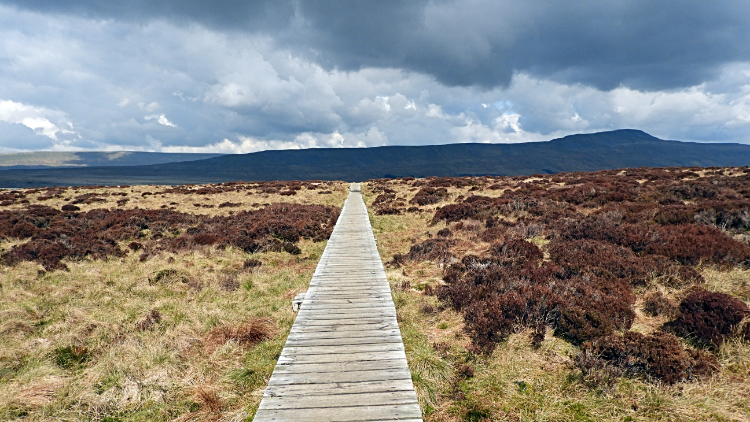 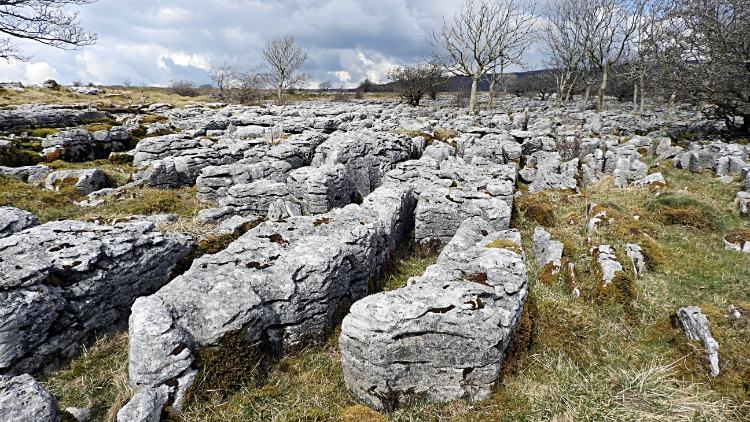 It used to be a splodge between Humphrey Bottom and Highwood Pasture. A right old squelch in which keeping the feet dry was an impossible task. Especially in winter and sometimes in summer. Footfall which increased with the growing popularity of the Yorkshire Three Peaks caused severe erosion of the moss and bog across the way and fashioned paths made away from the true path line only made things worse. In recent years this problem has been addressed with the laying of large rock slabs in part and a recently repaired substantial boardwalk over the wettest ground. Thus what was a tough slog is now an easy transit. Some die-hards loathe the unnatural improvement but it had to be done. As a result of the improved way I bounded across the ground to the green grass of Highwood Pasture, soon after reaching Souther Scales. A favourite place of mine. I do love limestone pavement and Souther Scales is a beautiful example. I took my main break of the walk sitting on one of the limestone clints. While sitting on the limestone enjoying my elevenses I looked into Braithwaite Wife Hole, a depression called a doline which is a large shakehole. Limestone land is a fascinating riddle. 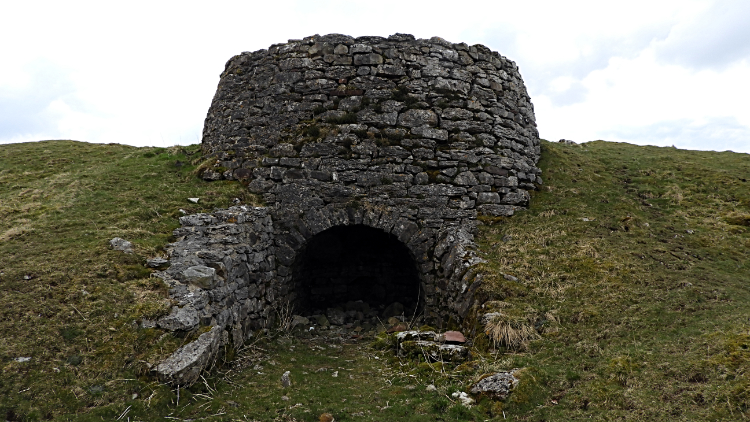 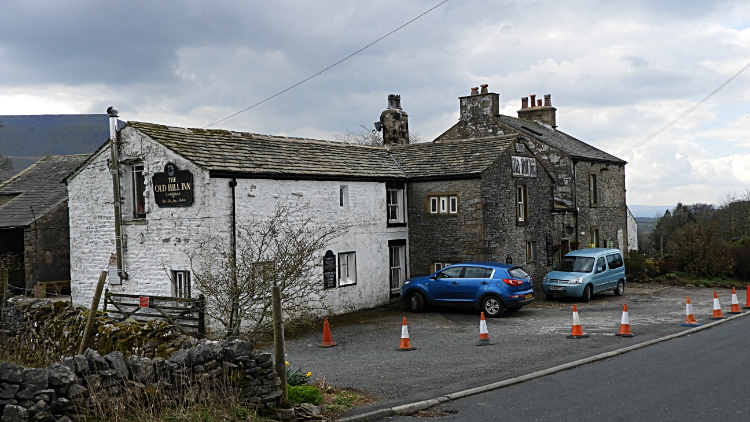 Off on my way to the finale of the walk, Souther Scales led down to Philpin Sleights where a restored Limestone Kiln marked the site of a disused quarry. Once past the old site I reached the B6255 road which I followed south west for a couple of hundred metres, passing the ever popular Old Hill Inn on the way to join the path leading from the road and along Philpin Way, passing Philpin Farm and leaving the lane to follow the dry bed at the south east end of Winterscales Beck. Below my feet the beck ran underground for about a mile, eventually to resurface at Chapel-le-Dale as Chapel Beck, itself morphing into the River Doe a little further downstream at God's Bridge. Such is the nature of limestone land that watercourses come and go, seemingly at random. 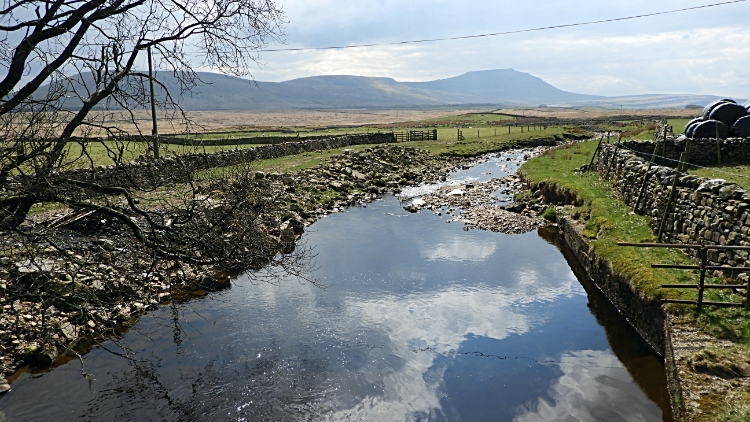 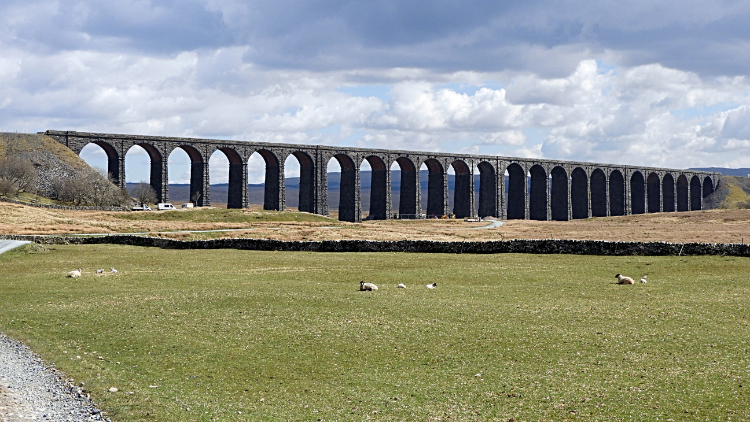 The final stretch of the walk was a delight. The joy of walking it was helped by the fact that the cloud which had amassed overhead on my descent from Ingleborough and persisted to this point had now started to break up. Fleeting glints of sunshine first, longer spells soon after. By the time I had tracked to Winterscales Beck showing itself properly above ground at Ivescar sunshine was once again dominating. The air quickly warmed by a few degrees, always appreciated in April. As a consequence of the improved light the beck reflected the sky and the views that were emerging of Ribblehead Viaduct, to which I was directly heading, were the most striking. All parts considered, this made the final part of the walk unforgettable. The viaduct dominated but beyond I took in great views of Pen-y-ghent too. All of ten kilometers distant in the same picture frame as the viaduct. "How good is that" I thought. It was a fitting end to a fantastic walk. Why had it taken me so long?