(Note: Maps show the official Dales Way route and not my deviations) 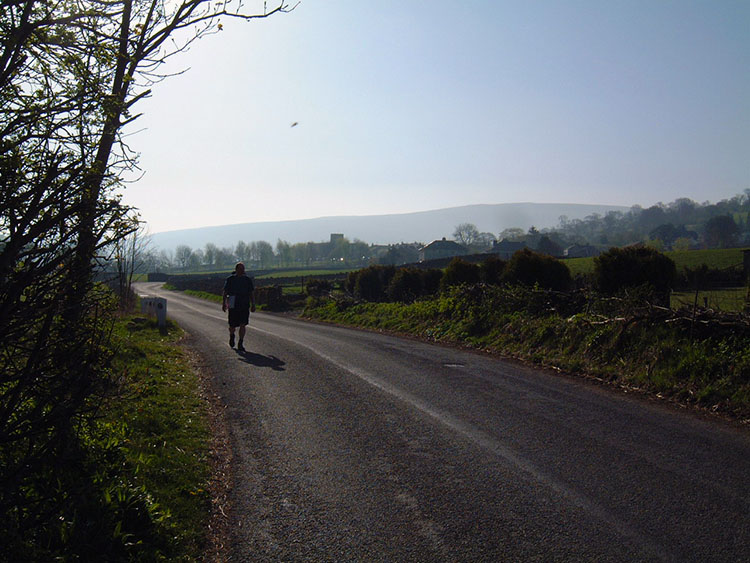 The road from Dent 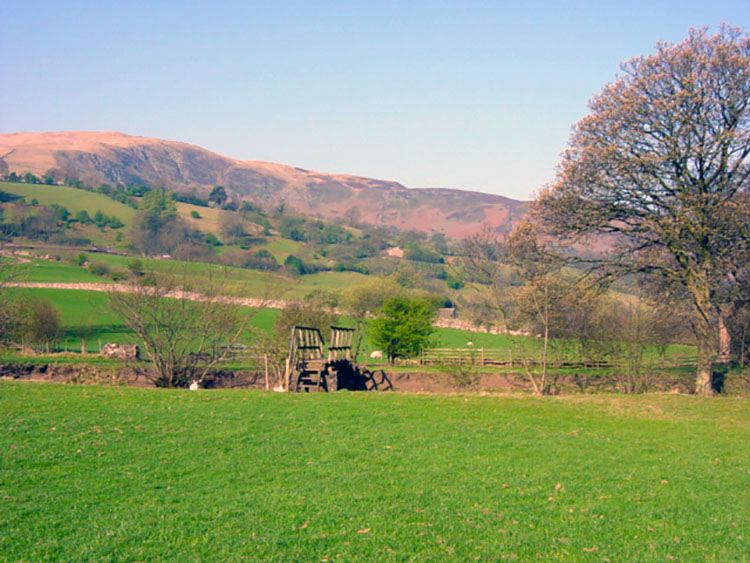 After a great night in the gem of a village that Dent is, Steve and I prepared for our last days walking together. Due to the impending Easter holidays Steve had to leave at Kendal, a shame. However, we still had a great days walking to enjoy together. As can be seen from the pictures we had the most glorious weather with unbroken sunshine and a temperature of over 20 degrees to walk with. Some would argue it was just a little too hot for comfortable walking but give me it anytime. It lifts the spirits. And today's walk was a lovely one. The day began by reluctantly leaving our favourite dales village behind. However the walk out of Dentdale to Sedbergh is a delight. We began by following the course of the River Dee as it winds it way down dale surrounded on both sides by picturesque high hills. For the 4th day running we were accompanied by the bleating of new born lambs as they wander around fields aimlessly and on sight of us call out for their mothers support. As soon as contact is made they scamper back to parental security. The initial walking is easy on lush pasture beside the riverbank until two miles out of Dent where we cross a footbridge and cut uphill to Low Mire House (grid ref: SD678893). The official path asks you to walk onto the main Dent to Sedbergh road at the bridge but don't do it, this option is much preferable and adds no distance to the walk. The benefit is that it avoids over a mile of road walking. At Low Mire House walk along a minor road fro about 200 yards then take a signed path from Craggs Farm to Leakses. Cross lush fields to Burton Hill and regain the Dales Way just after Hewthwaite. A detour well done. 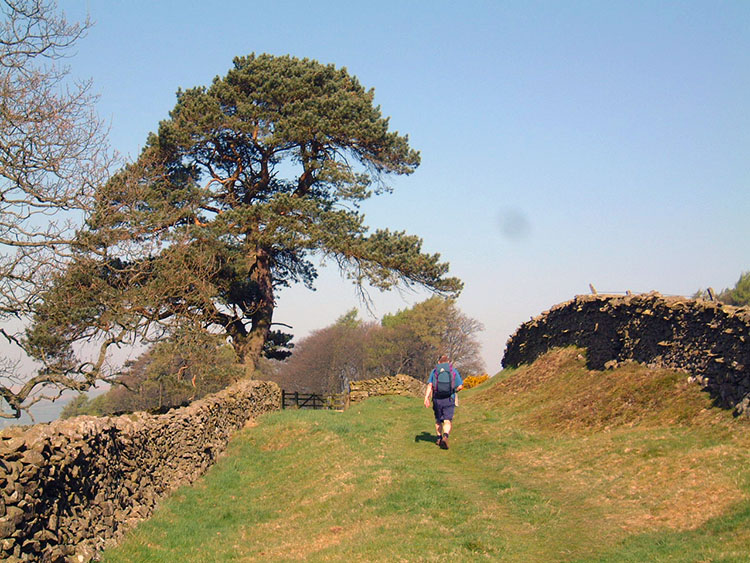 On the edge of Frostrow Fells 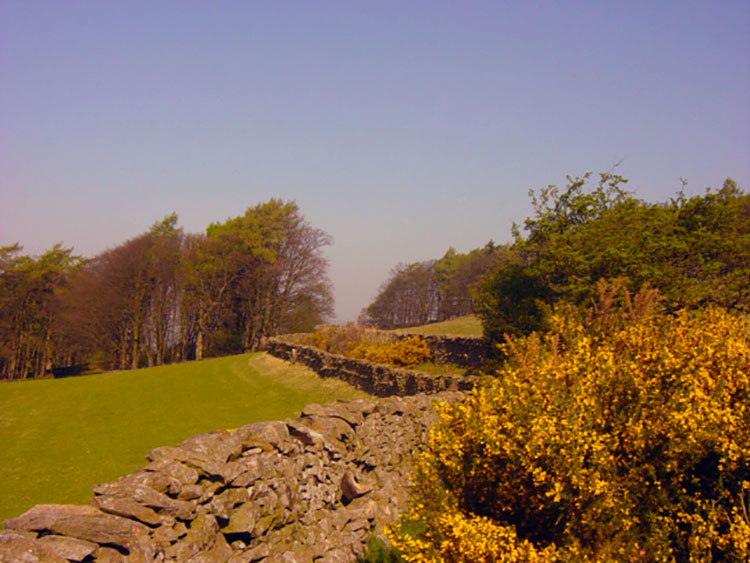 Approaching Sedbergh on the Dales Way

The last push out of Dentdale is divine walking. A little climbing has to be done to reach the western edge of Burton Hill but this is not tough and is done in lovely scenery along walled tracks and bridleways surrounded by green fields and the occasional copse. All too soon the immediate high point is reached from where excellent views of the market town of Sedbergh are gained. Steve and I paused here for a quick drink in the gloriously warm sunshine. From here the path leads us down to the edge of town and a meeting with the River Rawthey. From here the river is followed as it fringes the southern edge of the town, just close enough to touch habitation and the occasional sports field. At this point the Dales Way follows a quirky irregular route across fields, paddocks, footpaths and lanes while constantly changing direction. We cut some of this chaos off by following a road a regaining the path at Lincoln's Inn Bridge. 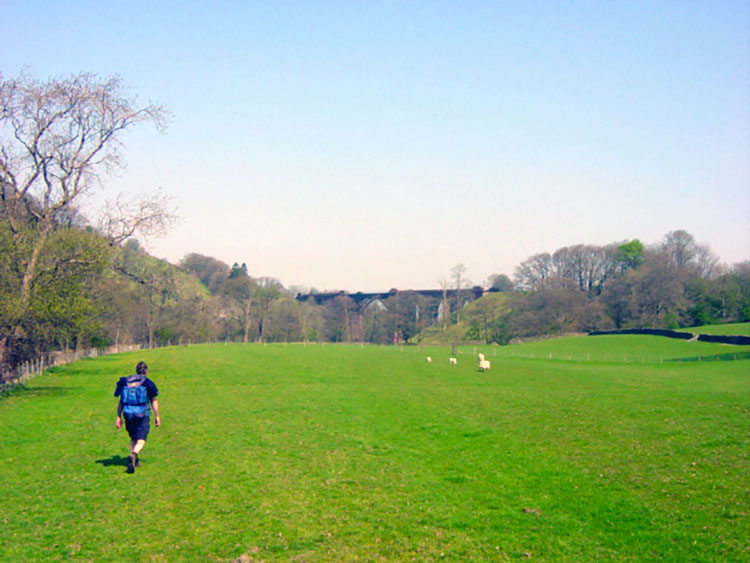 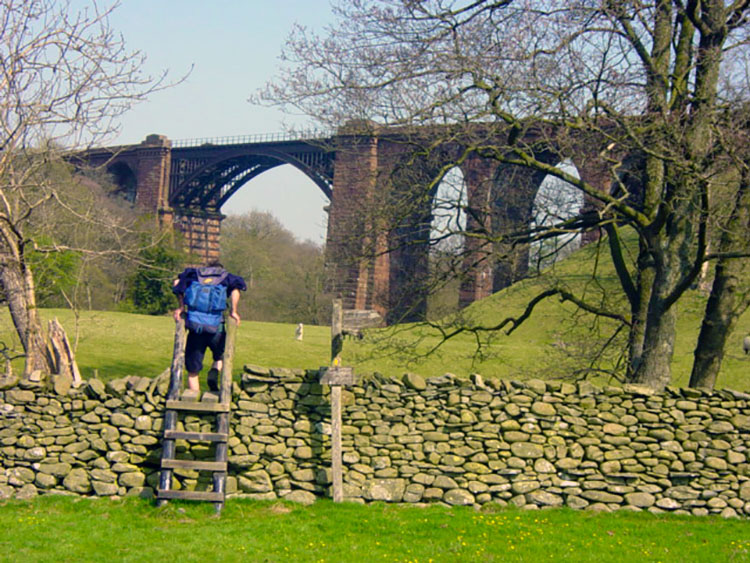 At Lincoln's Inn Bridge we met yet another river, this one being the Lune which we were now to accompany for the next three miles. This section is a fantastic part of the walk and better than I imagined. It starts with a pleasant stroll through meadows while the Lune meets the occasional rapids and falls. After a short while our eyes were diverted to a structure towering ahead of us. It is Lune Viaduct, a grand disused railway viaduct complete with magnificent stone arches and a central iron span. Admirable engineering. This section along the River Lune has another central attraction. As we looked to our right and straight ahead we could see the magnificent undulating hills of the Howgill Fell range. Steve and I have enjoyed many a good walk in the Howgill Fells, notably the walk up Cautley Spout to The Calf. Today we had no option but to look at them and think of great walks we had accomplished up there. 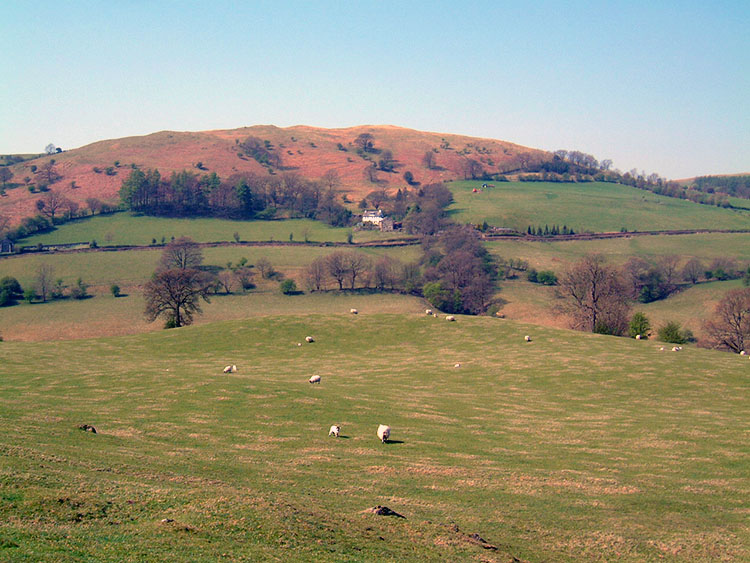 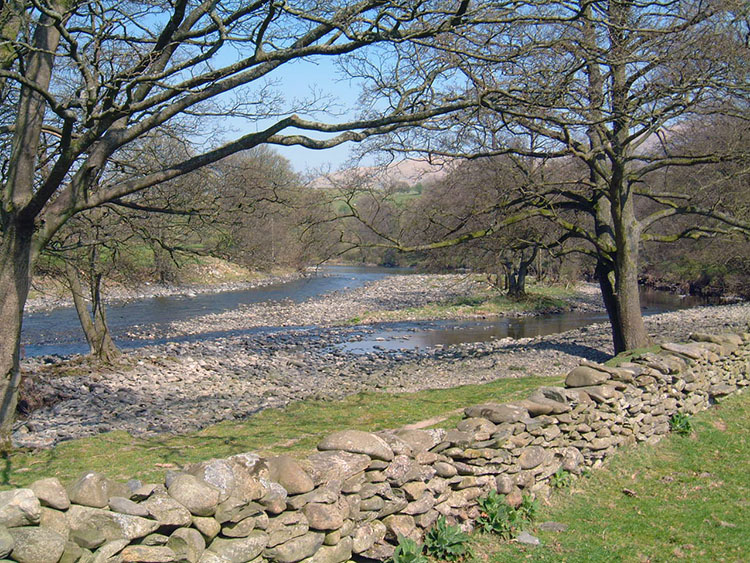 River Lune near Crook of Lune

After Lune Viaduct we followed the Dales Way away from the river to Low Branthwaite and then Bramaskew, two lonely and well positioned farms. From here we walked across more lush meadows while taking in the breathtaking views until we reached Hole House. At Hole House the walk forces you through the cobbled yard between cottages which must feel a little intrusive to the home dwellers. We passed through quickly and entered a little copse via a gate with a small rill running through it. Cross over a little footbridge and follow the rill down to another gate to regain open fields. Here we crossed the first field to remake our acquaintance with the River Lune. The path now enters a boggy phase through a wood at the riverside and indeed, even with the extremely dry weather we had recently, it was the only section of the walk where my boots got remotely wet. The wood is short but enchanting as you weave your way along the track, climbing over boulders and stepping over the roots of gnarled trees. 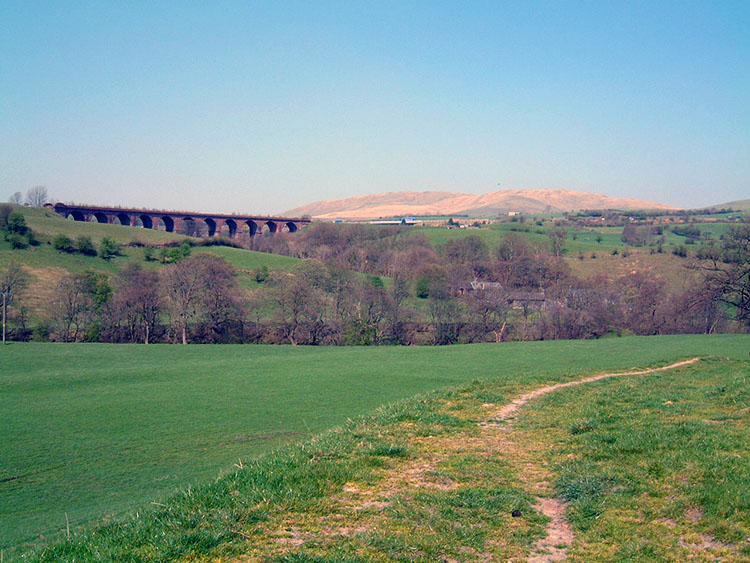 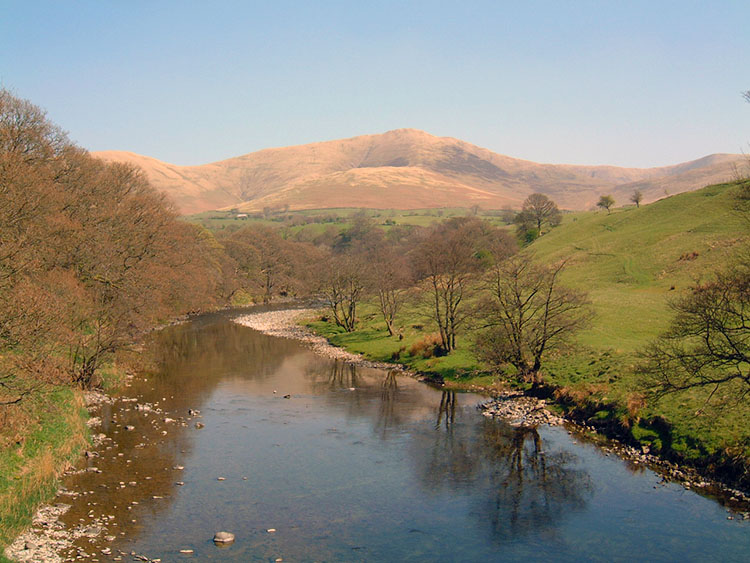 Soon our next target the Crook of Lune is in sight. It is with some reluctance that we leave the quiet valley of the River Lune but leave we must. As soon as the valley is left at the Crook of Lune via the quaint bridge our peace is shattered. We have just seen we are not alone as the M6 rears its interfering face. In a short time we must cross over it but until we do so we must put up with the constant noise of this busy motorway. still after the Crook we do enjoy more typical rural sights and delights as we follow the Dales Way under yet another magnificent structure, this time the Lowgill Viaduct. It is here the sense of leaving the Dales and approaching Lakeland appears as more and more properties are built of pale grey stone and roofed with Lakeland slate. 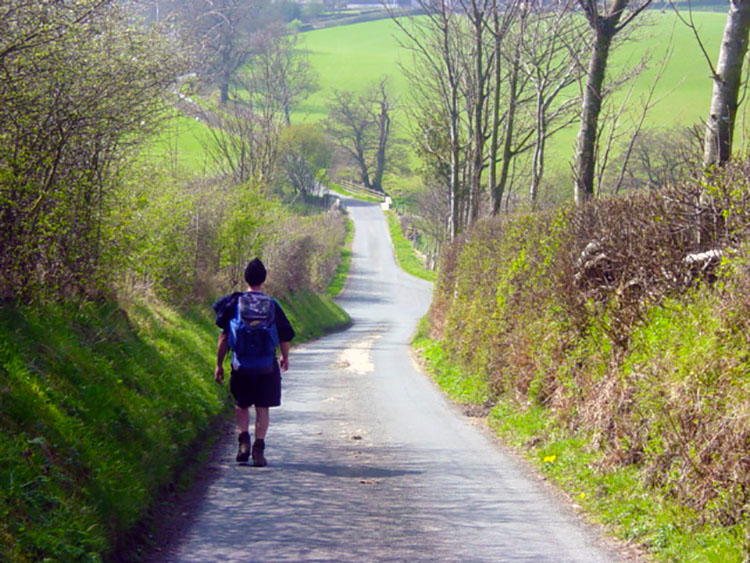 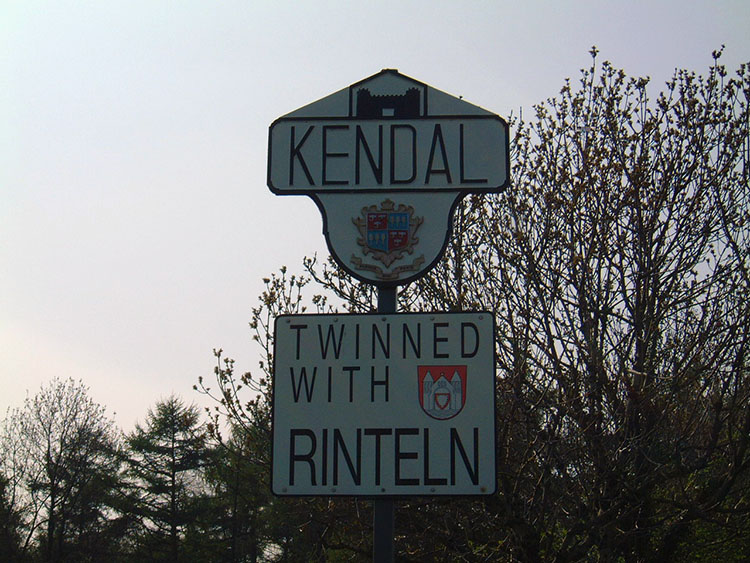 On the road to Kendal

After about a mile walking parallel to the M6 we cut off to meet the motorway and cross it by a footbridge at Lambrigg Head. It was just after the farm where we made a mistake. Walking up a road from the farm we missed the sign, if there was one, and walked to a road junction. the omission caused us to walk two miles of quite tarmac road instead of following the official path. On realising our error we decided to improvise as Kendal was our goal for Steve's departure. Thus the next section of the walk to Burneside was amended to include Kendal. I would regain the path at Burneside tomorrow. So, our necessary alteration was made and we followed the road to Docker Hall. From there we crossed fields until having to walk for two excruciating miles of the A685. Fortunately it was not busy and as we approached Kendal we cut off through a disused quarry and fields into Kendal. It was here Steve and I parted company as he had to get home tonight. Thanks for the company mate, this Dales Way is proving to be a fantastic journey but your company has enhanced the experience. I'll finish it for both of us tomorrow. And as for today, apart from that last road bit it was a fantastic days walking, much better than I expected. Then again the Dales Way is proving better than I expected. The only grumble, it is too short.