Summary: This walk is designed to be taken at a leisurely pace, all the while taking in the atmosphere of Wicken Fen, the National Trust's oldest nature reserve. Wicken Fen is also a National Nature Reserve, Site of Special Scientific Interest and Fenland Special Area of Conservation under the Habitats Directive so it holds a lot of prestige. Quite rightly too, the fen is a wetland site of international importance and is rich in Fauna and Flora, being home to many rare invertebrates and plants. This walk is an easy amble around the reserve and while the route is the one my wife Lil and I took on our visit you are at liberty to wander freely around the site. 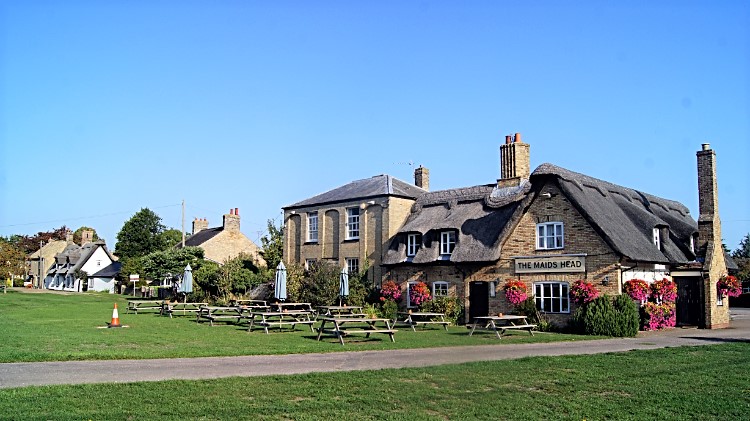 The village of Wicken 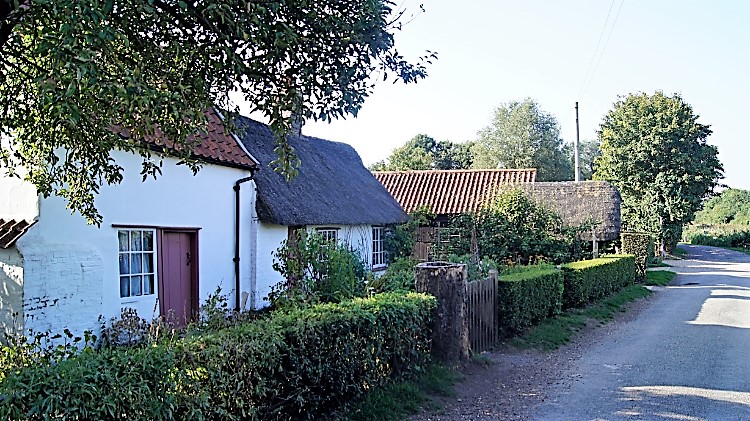 It was our first ever holiday in the East of England and I had picked a few shorter than usual walks which my wife could also enjoy, as holiday adventures rather than route marches, and ones in which she could fully occupy her interests while walking. As we both love walking around Nature Reserves then this walk became one of the obvious choices. We arrived on a beautiful summers day and both of us were immediately smitten with the prettiness of the village of Wicken. Never mind the walk around the nature reserve awaiting us, the drive and preamble of driving through the loveliest of Cambridgeshire villages with gorgeous cottages, a welcoming pub and splendid windmill house was a delight all of its own. We chose to park up by the village green ans look awhile before continuing on down Lode Lane to the National trust car park, the designated start of our walk. After parking the car we wandered down the lane and past Lode Lane Fen Cottage. A National Trust owned property, a sign told us it would be open to view a little later on, after our walk around the reserve. 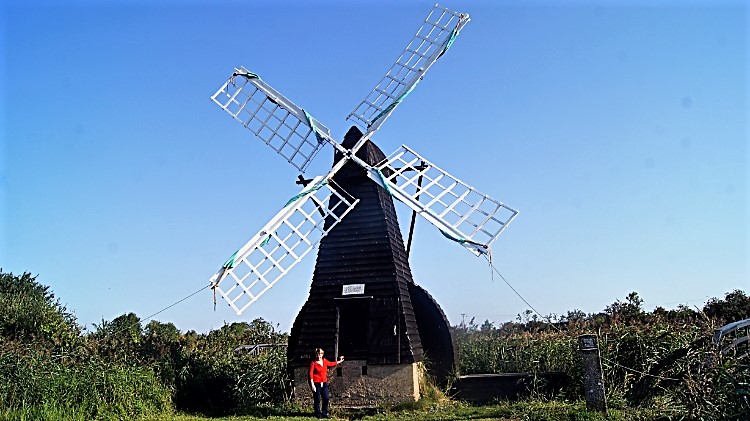 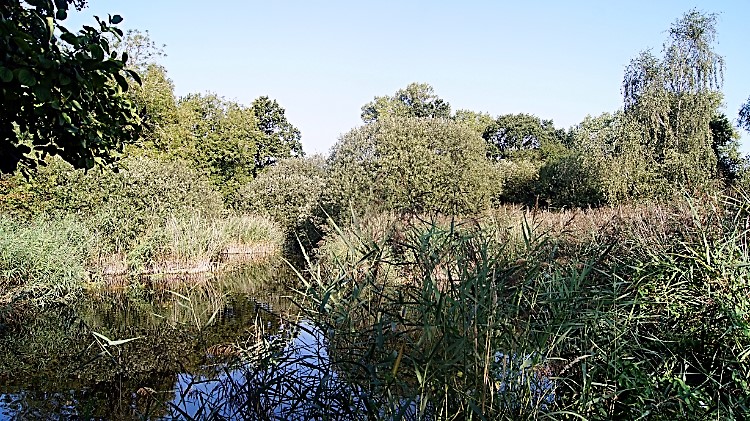 Being National Trust members Lil and I entered the approach building and showed our cards to the member of staff on duty. (Note: If not a National Trust member please check Wicken Fen entrance charges before coming on the walk). Rather than walking straight out of the building and into the nature reserve we took a little time to look at the information boards telling us what to expect and what to look out for. As it was summer we could possibly see Marsh Harriers, plenty of Dragonflies including Emperor, Broad-Bodied Chaser, Common Darter and Banded Demoiselle and also Butterflies including Meadow Brown, Small Skipper and Essex Skipper. Wildflowers to look out for included Orchids, Yellow Rattle, Meadow Rue and Devils-Bit Scabious. I forgot about half of them no more than a minute out into the open. The first thing that drew our attention was a windpump which was just a minute down the path we chose to take. Wicken Fen Drainage Windpump was a thrill to stand beside, a heirloom of the past saved for our enjoyment. The only survivor of six in Wicken Fen it was rescued from a dilapidated state in 1956 and restored. From the windpump Lil and I strolled on into the heart of Wicken Fen by way of a path running parallel to Breed Fen. 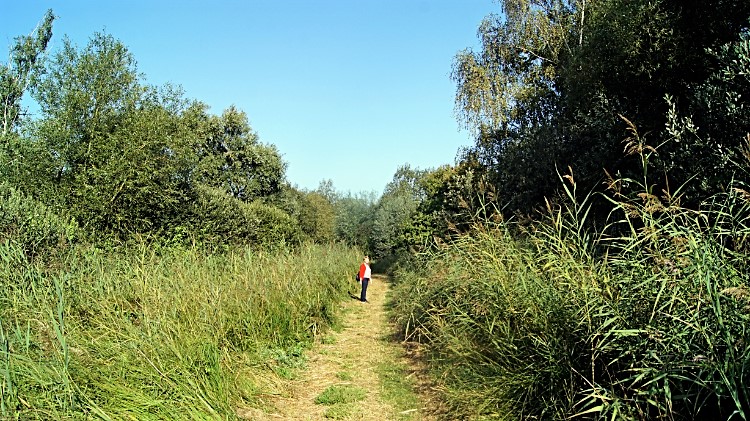 Avenue of reeds and trees 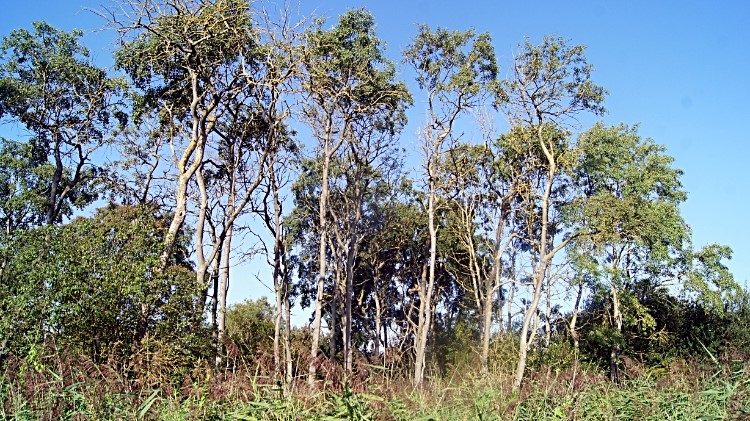 While walking beside Breed Fen we were stopped dead in our tracks by the weirdest chomping noise. It was coming from deep in water-bound reeds so we had no hope of spotting the culprit but we could clearly hear it. By the tone of noise this was no waterfowl chewing individual reeds but a bigger animal altogether. "You are sure there are no Crocodiles here" said Lil jokingly. "Hope not" I replied. (I have read the noise may have been caused by Muncjack Deer or Roe Deer, both species having been spotted in and around Wicken Fen in 2018 and in 2019). After leaving the scene of the mysterious noise we enjoyed a quieter interlude walking along the lane of reeds and trees, the only noise now been the rustling sound caused by the gentle breeze wafting over the reeds and young trees. 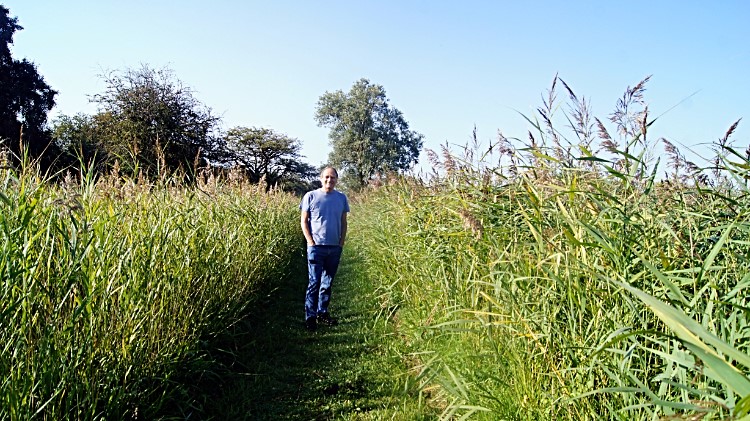 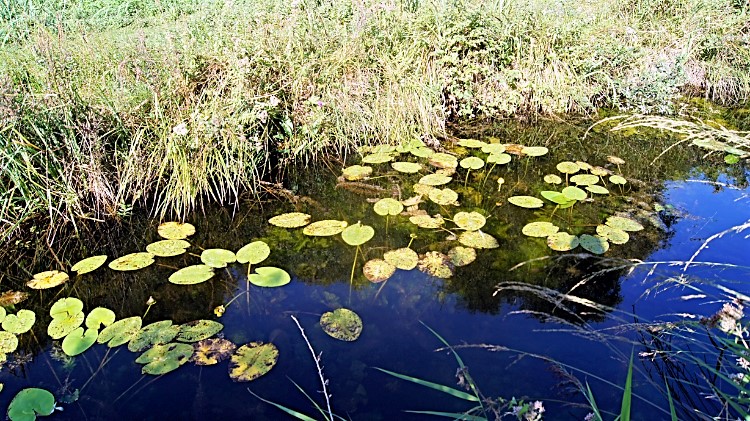 The next spot of excitement we enjoyed was caused by clear sightings of Dragonflies. Once we had spotted one we spotted another, and then another. While walking along Sedge Fen Drove we happened across plenty of them. As it was mid morning and warming the Dragonflies were waking from overnight slumber and sufficiently warmed by the sun they were taking to the air. I was chuffed with myself when I identified them as Common Darters. Some came to rest on reed tops at almost head height and others came to ground near us. They did not appear as shy as some species I come across. It was fun being in their company as they whizzed along the path with us and sometimes across it. I said to Lil "I have called them my Red Arrows, such is their aeronautical display". 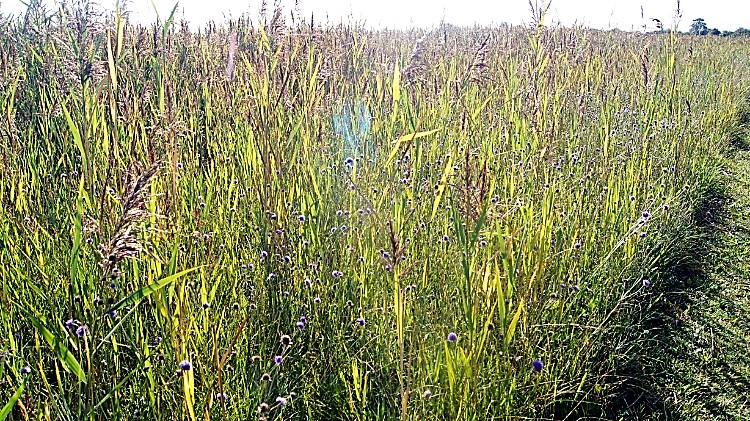 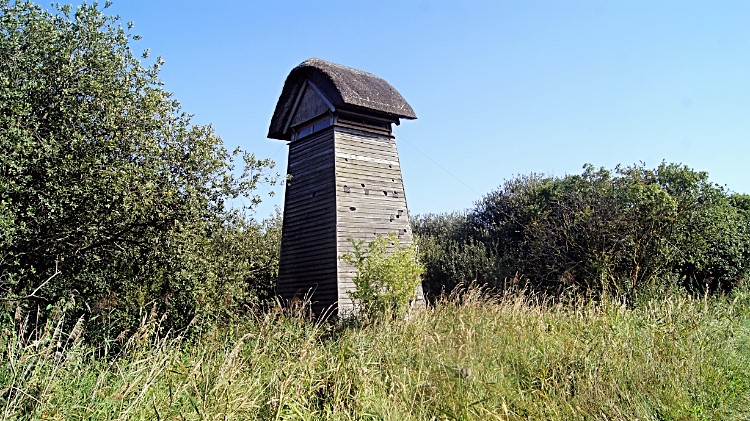 From Sedge Fen Drove we turned ninety degrees left and began heading back along another straight line pathway. Peering through gaps in the reeds, they were too high to see over, allowed us to look into the fen drainage channel running parallel to the path. I noted the water was very clear. Water Lily leaves thrived in the oxygenated water and plenty of water surface life enjoyed their habitat, skimming over the surface. Through another gap in the reeds we looked across the drain to spot the herd of Konik Ponies. They were grouped together chilling out under a tree. The sun was high in the sky now and it was getting hot. I am sure they appreciated the shade. Next we arrived at an observation tower from where we looked across to a copse of trees where a frenzied flock of Swifts were flying in and out of roost. There were a lot of them and they gave out quite a cacophony of sound. I don't know if they were spooked or just playing but the antics of the flock went on for all the time I watched and it had not abated after we left the observation area and walked on towards the finish of our walk. 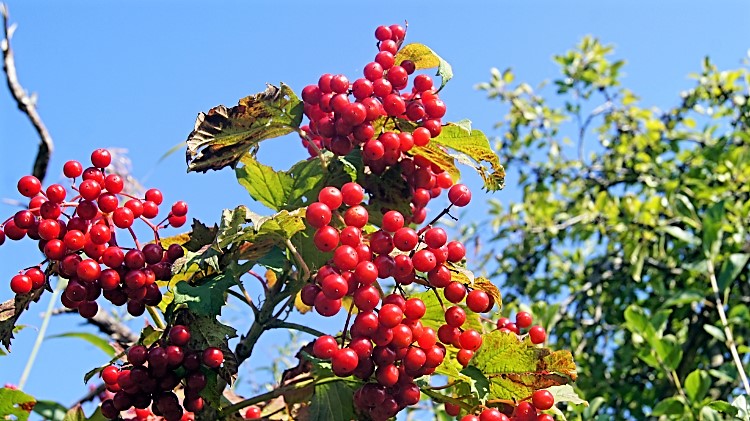 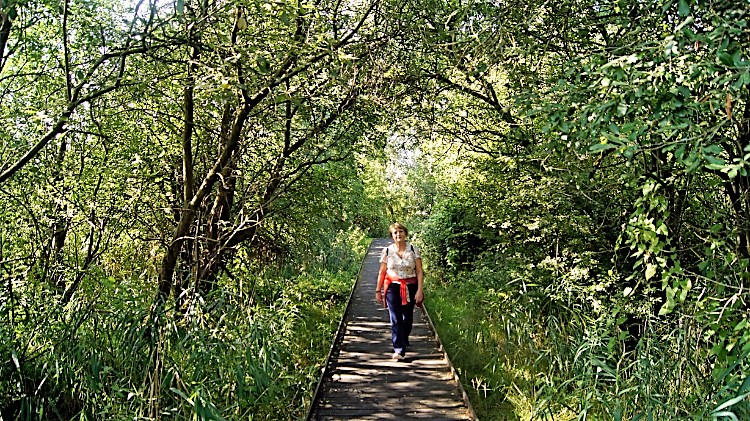 Mrs B enjoying the walk

Noise from the avian squabble abated when we walked through a closed avenue, treading on a wooden planked walkway under the shroud of leaf which took us towards the finale of our walk. We passed colourful displays of ripe ruby red Gelder Rose berries and came to a boathouse where the Mayfly, a small leisure boat was berthed. The Mayfly is available for booking group boat trips along Wicken Lode. We stayed dry, finishing the walk around Wicken Fen with a cup of tea and sandwich at the National Trust cafe. The drink and food was lovely, the attention of wasps was not though. Pesky they were. Still we got by without a sting and finished our day at Wicken Fen by exploring Lode Lane Cottage. It is well worth it for the journey back in time, a super way to end a super walk. Wicken Fen was everything we wished for and more. Lil was very pleased to have walked around Wicken Fen. As was I.