Blakeney, Norfolk Coast Path and Cley next the Sea

Summary: This walk takes advantage of the Norfolk Coast Path in the first part from Blakeney to Clee next the Sea before wandering quiet country lanes to Wiveton and concluding by following quiet roadside back into Blakeney. A walk of two halves, the first is set beside reed beds and marshes with coastal sensations abounding. The second half is remarkably quiet and still... well it was for me on a sunny and calm day. Peace abounded. 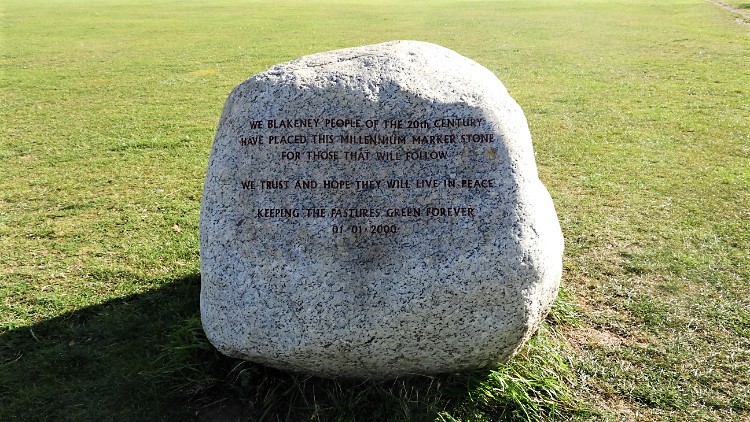 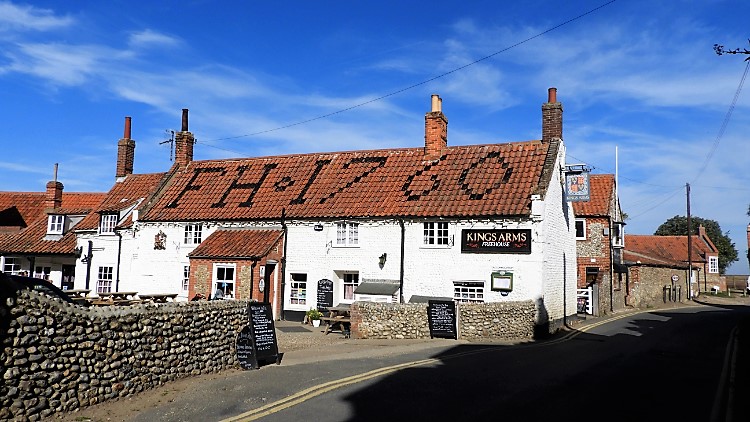 It was my first visit to the north Norfolk Coast. I had woken up in my North Yorkshire and travelled over on a sunshine filled mid October day. It was unseasonably warm. I arrived in Blakeney, having planned it as my first adventure in this part of East England. I had read that the Blakeney estuary is an amazing landscape of marshes, mud banks and sand hills and that the village of flint houses and quaint buildings is a draw to those visitors looking for both the local culture and for the natural wonders of coastal flora and fauna. Popular imagination also has it that the skies are big around here. Being filled with blue that excited me and I was keen to get on my way and discover these new findings for myself. The big skies would have to wait as I walked from the village car park along Westgate Street towards the coast. I popped into the village park and discovered the Blakeney Millennium Marker Stone which promised to keep the pastures green forever. Then I walked down the street past pretty flint cottages and past the Kings Arms which looked very inviting in the hot Indian Summer conditions. I guessed the inn was founded in 1760. It was written large in black paint on the red tiled roof. Next I passed Blakeney Flint Gallery. With more time I would have gone in and admired the work of local artists but my schedule required me to press on. 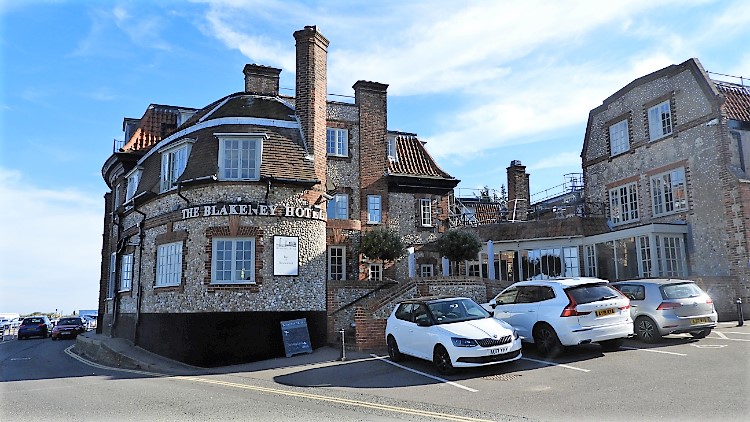 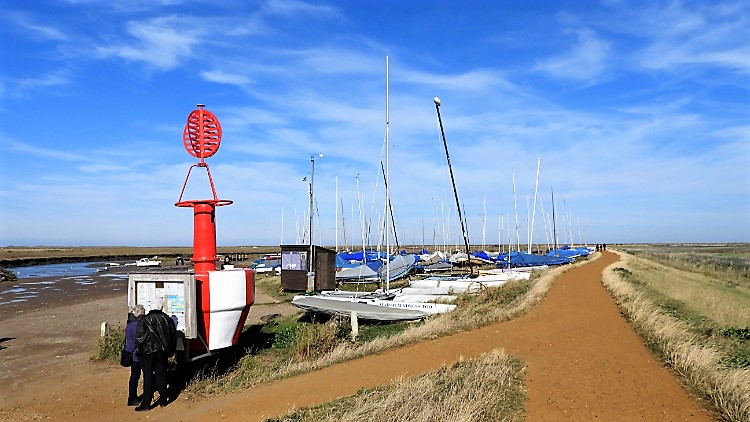 Path leading from Blakeney to the coast

I arrived at the north end of Westgate Street and reached the coastal fringes. The rounded flint stone fascias of the Blakeney Hotel impressed me. A lovely building. More impressive though was the natural setting with the New Cut watercourse meandering around the front. A mix of small pleasure boats and working boats were moored in the water. It was low tide and some were sat on the mud banks of the cut. Waiting for the tidal rise. A quaint sign by the waterside read "I am just a little Gilly Crab. Please don't hurt me. Catch me, look after me, give me water, don't overcrowd me, put me back gently, and you may see me another day". A little further on a number of signs advertised 'Blakeney Point Seal Trips'. I had inquired about them but to go on one and see the famous assembly of Grey Seals I would have to wait until evening; when the tide was high. Alas another time. I walked on by following the sign of Norfolk Coast Public Footpath pointing north as they do on this section of Norfolk coastline towards the North Sea. 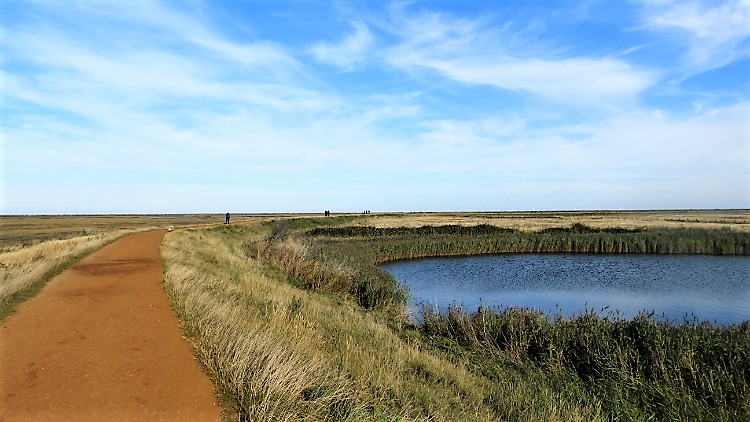 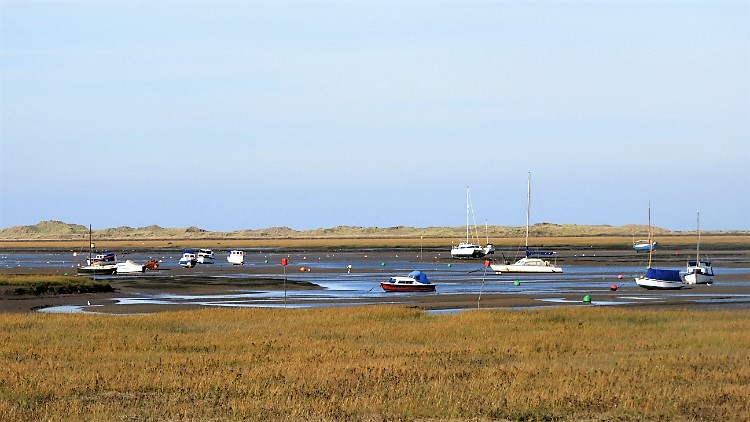 As promised the big skies unfolded before me as I walked out from the confines of the village to the flat expanses of the coastal margins. Indeed they were big skies. With nothing structurally tall to enclose it the sky filled everywhere above and around me. The margin between sky and land was one continuous long straight line. It was an exceptional sight. I love hills and I admire many structures in built up areas. They are the norm of my life but here the temporary change to my views was breathtaking. Many hillwalkers such as I say the flatlands are boring but I do not see it that way. Certainly not. This new seldom experienced beauty was stark and imaginative. Okay, I was in benign conditions but I imagined in winters front and hoar it would be equally impressive. And with snow too. I was loving this great big reveal. And I had just started to take it in to my senses. A scattering of boats moored, or more appropriately beached, mud bound or stranded in Blakeney Channel exhilarated my senses too. This was really good. 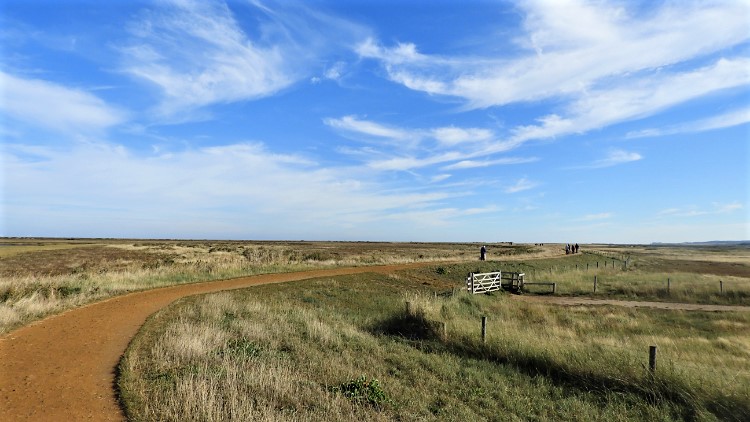 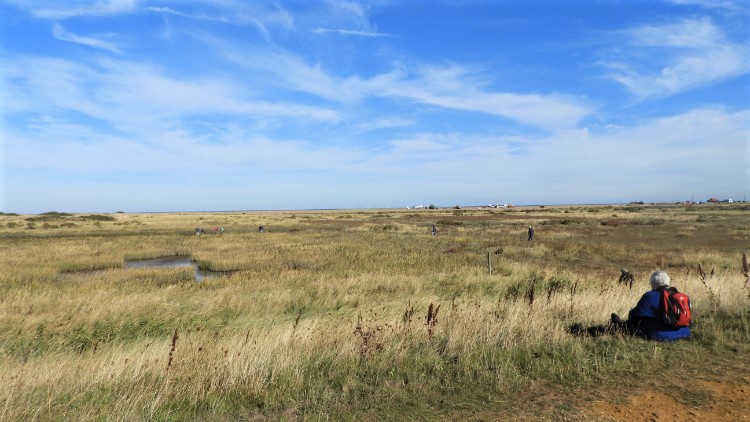 Looking for the site of Blakeney Chapel

As I walked following the curve of the path as it turned from north to east I observed the margins of the path on both sides. There was always interest in what seemed the unchanging. Extensive mud flats of Blakeney Nature Reserve were to my left and wavy reed wetlands of Fresh Marshes were to my right. However each side had episodes of adventure. I passed a decaying boat stuck in the mudflats. Judging by the deterioration it had been abandoned for some years but despite its ineffectiveness as a craft the boat now had an aesthetic beauty which, if retrieved from its watery muddy grave would grace the Flint Museum as a feature. On the marsh side small openings in the reeds revealed small lakes, most of which attracted coastal birds and waterfowl. The masses of spring like marsh harriers, wildfowl, spring migrants and maybe bittern may have moved on but some had stayed to entertain. A community of Canada Geese were close by, nibbling away amongst the grasses fringing the reeds. Ducks, usually in pairs were here and there too. There were people wandering the marshes at Blakeney Eye too. About a dozen or so in total, all looking to the ground. I first thought they were looking for insects, perhaps Butterflies or Dragonflies, until I came to an information board explaining they were searching the site of Blakeney Chapel. Apparently there is not much to see now but it did not stop them looking. 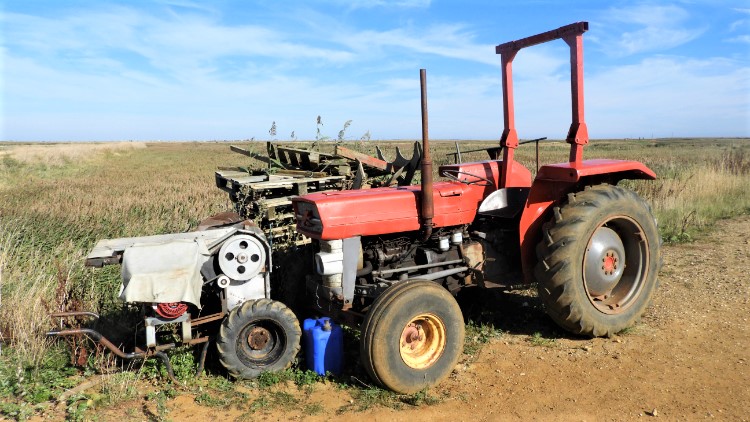 Parked up by the wayside 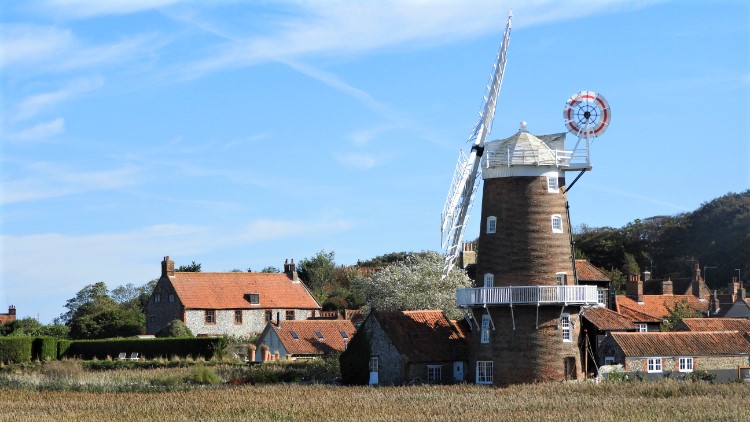 Cley next the Sea

I was at the outermost extremity of the path at Blakeney Eye and considered crossing to the Bar and follow the coastline west to see the Seal Colony at Blakeney Point. Looking at the water channel I would have to wade across to get there scotched that idea. I continued following the path from Blakeley Eye, now heading south from the coast and towards the village of Cley next the Sea. As I headed inland the prettiest of windmills caught my eye. Appropriately for a village with a windmill the village has a distinct Low Countries feel with some buildings having Flemish architectural features. I was already thinking, having seen the buildings of Blakeney and now Cley next the Sea, how beautiful this part of England is. Gosh, I was enjoying this new experience. (Note: Afterwards I read about Cley Windmill which has quite a interesting history, including a link to a popular musician of the noughties). 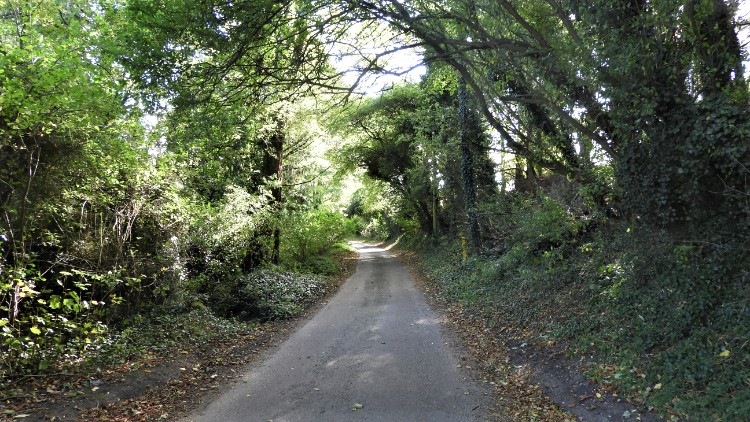 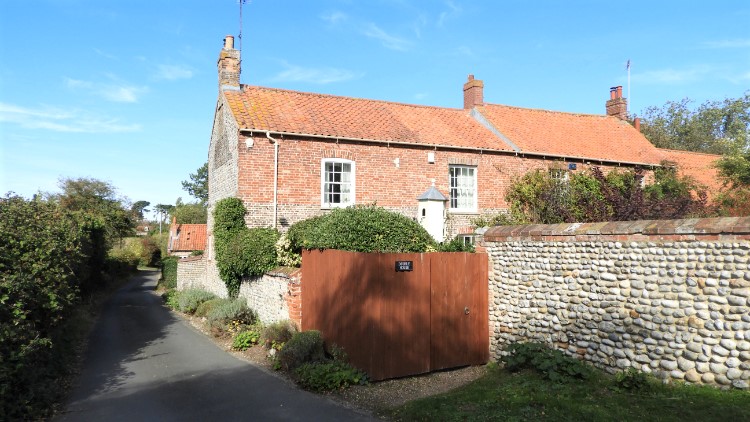 From Cley next the Sea, which needs a slight detour from the route to visit, the essence of the walk changed entirely. The big skies of the coastal plains were lost immediately when I climbed down from the bank of the Norfolk Coast Path to follow the coast road linking Blakeney and Cley next the Sea. Now I could have been in any county of England, the country lane I next followed to Wiveton being like many I have walked in my explorations of my home country. The lane was fringed by banks of native trees and familiar hedgerow shrubs. Despite it being the second week of October all was still remarkably green. It had been a fine Summer and early Autumn too. Everything was hanging on, enjoying the last warming sunshine of the year. I reached Wiveton, a very pretty village. More like a hamlet, a scattering of smart houses, impressive flint stone garden walls and pristine kept gardens, it seemed everything like an inland village. I was astonished to learn Wiveton was once a port, the River Glaven which is now like a stream or beck once being navigable as far as the village and beyond. 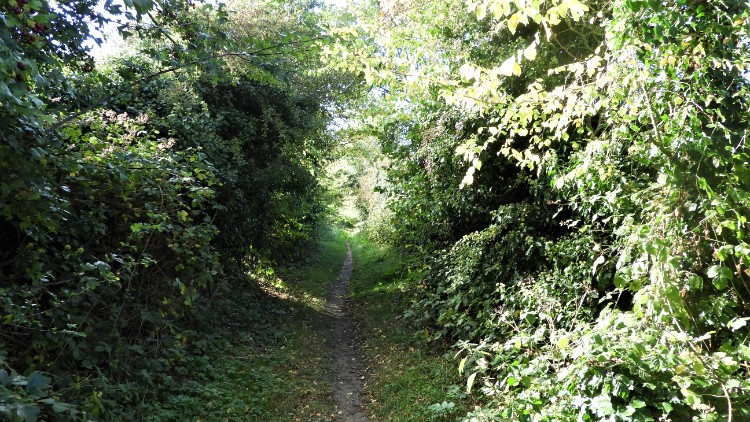 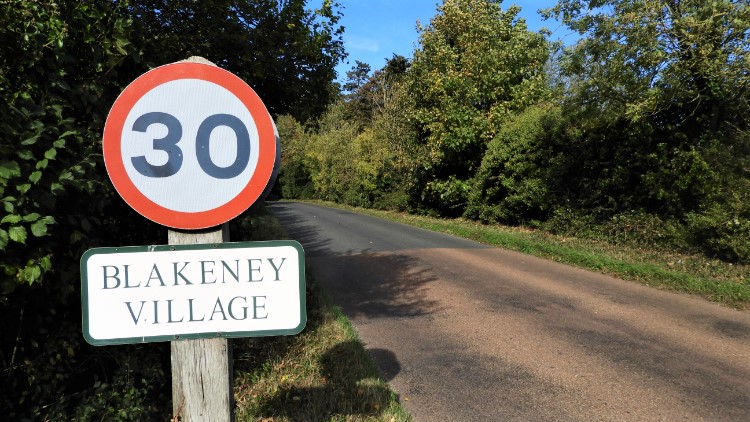 From Wiveton I followed a public bridleway which was more like a shrub bound alley for a narrow horse. I could not image a horse and cart getting thorough that gap unscathed. Not now, I brushed the sides myself. I also felt myself taking up an amateur course of cider maker because the lane was ground covered with crab apples and I squelched a good number of them as I walked along. Many had been crushed by other foot travellers before me. Beyond the cider making phase of my walk I reached Blakeney Road/ Wiveton Road linking the two villages which would lead me back to my starting village. As I walked on the roadside I first met a cyclist taking a breather before the climb up the hill, yes you read it right, a hill, into Blakeney. We agreed it was a beautiful day. Then I met two walkers, a couple from the Netherlands, who were walking in the opposite direction. The gentleman asked "Is this the way to Wiveton?". I confirmed "Yes, I have just come from there". After thanking me they continued on their way down the hill. I climbed to the hill crest, 30 metres high. The top at 35 metres is just east of the road in a field, the summit of Howe Hill. 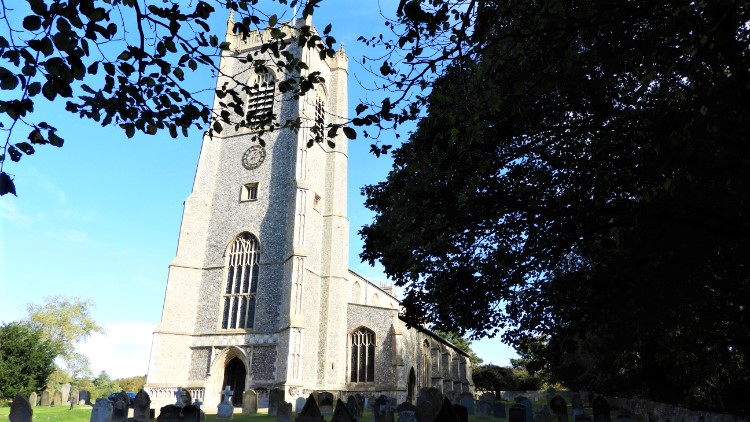 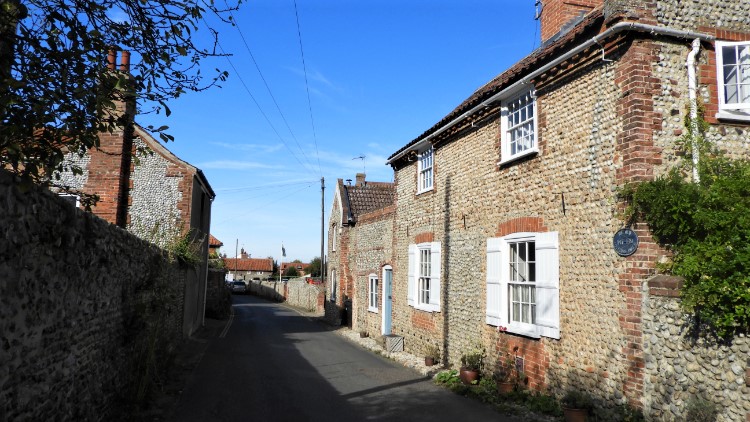 St Nicholas Church marked my highest point. At 30 metres high on a hill surrounded by flatlands it was a draw for all people around the former important seaport of Blakeney, ever since it was first built in the 13th century. The church, a later incarnation of the original, is an impressive sight. From the church I walked down High Street, admiring more gorgeous flint stone fronted cottages and larger houses, including a tiny one built into a gap and aptly called the Hidden House. From the High Street I turned left and followed an alley to the park I had stood in at the start of my walk. Called the Pastures a rectangular piece of slate stood by the park side. It was inscribed. A nearby plaque read "The Snitterley Stone, Welsh slate carved by Teucer Wilson". My walk was done, my first ever in gorgeous Norfolk.