Summary: I had been invited to stay in Cromer by the This is Cromer team. Amanda, the head of PR said "I would like to offer you the opportunity to come and visit for a couple of days in order to review some of their marvellous walks. There is an abundance of choice, ranging from short walks to longer ones across countryside, along river banks, through woodlands, over hills, along cliff tops and beaches. There is also the Norfolk Coastal Path (45 miles) which ends or begins in Cromer. Whatever walking route you choose it promises to share some of the best views the seaside town has to offer." How could I refuse such an invitation? Off I went to discover these riches for myself. This walk, which covers most of the natural habitats Amanda described is a belter. 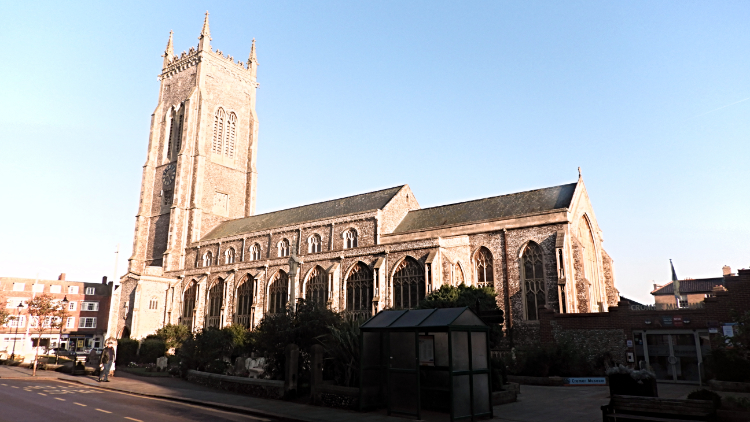 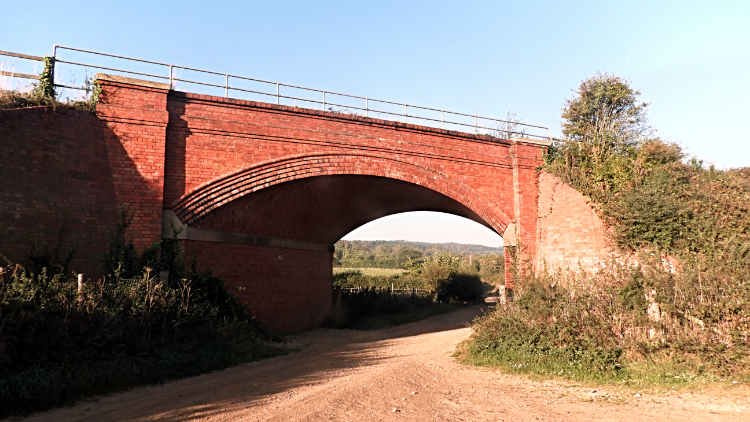 I set off on the walk as early as possible, at 8.45am, after the earliest breakfast possible from my accommodation provided by the This is Cromer sponsors. My hosts had also arranged for me to meet a group of charity walkers at 11.00am in Sheringham so I had no time to waste, six miles to walk in a little over two hours. With no messing about on the first bit of walking, out of Cromer to connect with the Peddars Way/ Norfolk Coast Path south of the seaside town, I stopped briefly to take pictures of Cromer's finest buildings, premier place going to St Peter and St Paul, Cromer Parish Church. It looked great with the church tower rising high into the cloudless blue sky. From Church Street I connected with the A148 Holt Road and climbed as I briskly walked along the footpath, By the time I left it to follow Sandy Lane I had climbed to 40 metres. I looked back over the roofs of the North Norfolk's premier and perhaps prettiest seaside town before continuing on my way from Sandy Lane to cut the gap between Roundabout Hill and Stone Hill. I was still climbing, peaking at 60 metres before descending to a railway bridge set on the Cromer Curve, a full 180 degree bend of the railway just south of the town. For me it was straight ahead, due west and on a second climb to Congham Hill and beyond towards the woodlands and plantations of the North Norfolk heathland. 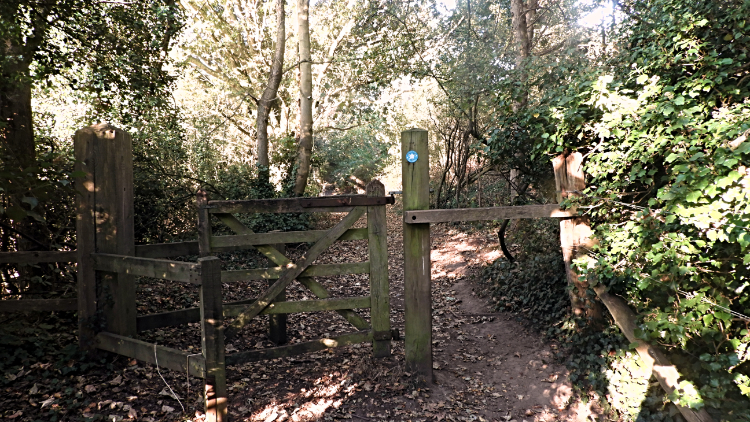 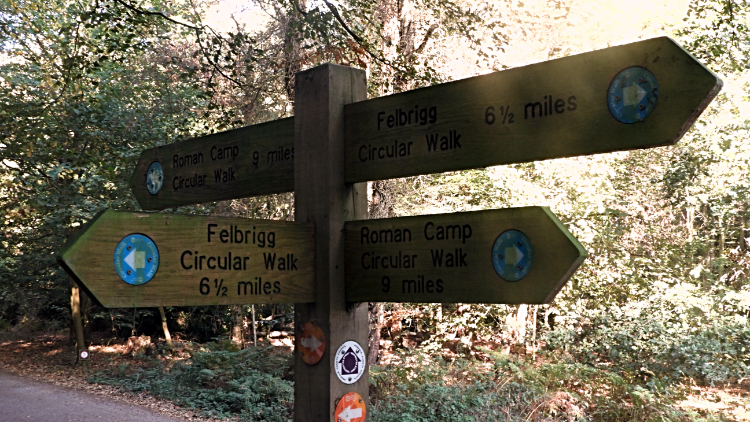 Paths in all directions

All of the walking from Cromer to the woodlands which I first accessed at Earlham Plantation had been along lovely unmade lanes. Most of the time I had been closed in by high hedgerows and dense avenues of trees. sometimes gaps allowed me to see out to the heath hills on my left and to the coastal stretch I would be walking on my return leg later on. Being October the greenery was showing tinges of autumnal change but not as much as I had expected. It had been a gorgeous summer and the foliage was still gleaning what it could. However some hedgerow shrubs and trees had berried. Others, such as the many Sweet Chestnuts on the trail had shed their bounty. The carpets of them crackled as I stepped on, the local fauna were in for a bounty harvest. I walked through the lush plantations of Earlham and Edward's to reach my second Sandy Lane, this one the road linking West Runton and Aylmerton. In reaching the road I was standing at 102 metres altitude. Who said Norfolk was flat? 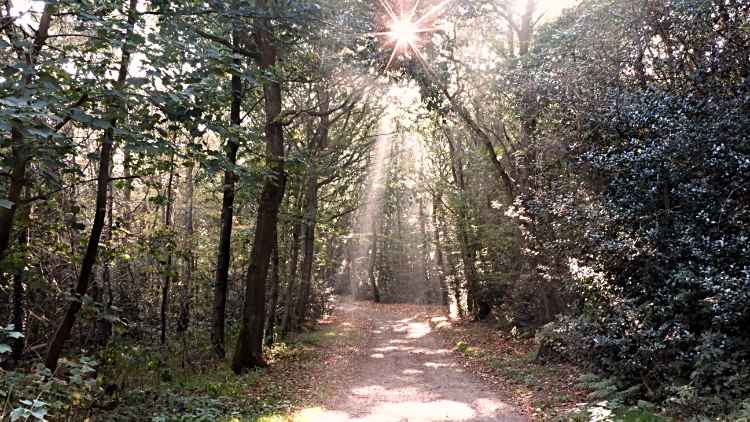 Rays of sunlight in woodland near Beacon Hill 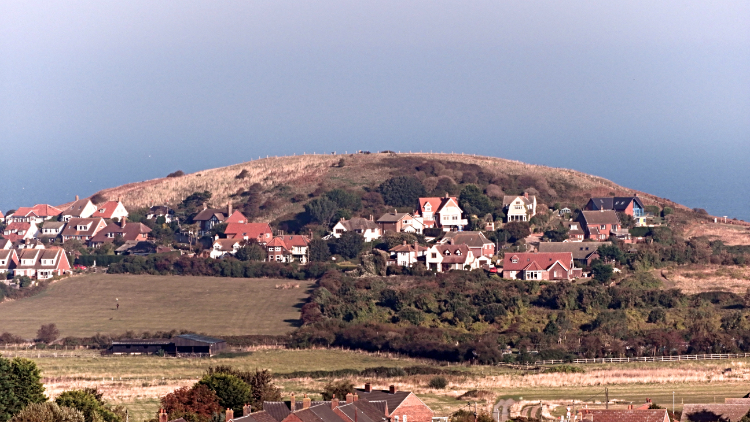 Soon after, and with three further metres of climbing I was standing on top of Beacon Hill. I had reached the county top of Norfolk. In doing so I had also reached the heathland. An information board on Beacon Hill read "West Runton and Beeston Regis Heath - Amid the highest ground in Norfolk, views from this place show why it has been a look-out for warning of enemy invasion over hundreds of years. The remaining heaths and their special wildlife give as flavour of the extensive landscape of old and still shows signs of early Saxon industries". The wildlife included Grayling and Green Hairstreak Butterflies, day flying Moths, Nightjars, Lizards and Adders. I would have liked to see an Adder, not to disturb it as such but to witness one in the wild. That would be a new experience for me. The Saxon workings are ancient iron works. I did see small shallow pits scattered on the hill which may well of being workings in the past. Another sign nearby read "National Trust - Roman Camp". It is not thought Romans were here, a legend created by local horse drawn cab drivers to boost early tourism. I did find a camp here though, a Caravan Park. A big one which was thankfully shielded by fencing. I did not want to see it interrupting the beauty of my heathland walk which continued though sections of gorgeous woodland and open ridge walks which did indeed reveal great views of the coast and local seas. I would have seen any invaders coming. 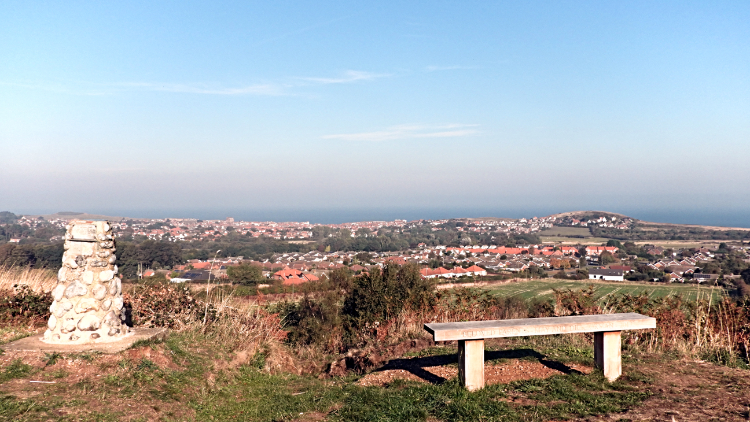 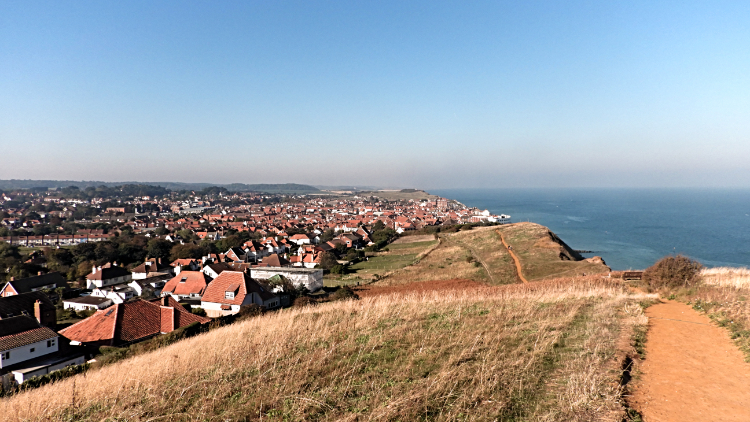 Path to Sheringham from Beeston Bump

Towards the end of my heathland ridge walk I looked across to the seaside town of Sheringham. It was a great view, appropriately marked as a viewpoint on the Ordnance Survey map. I was drawn to look over the red tile rooftops of the town and to the small hill rising on the edge of town. Beeston Bump may be just a little over 50 metres high and only 30 metres over the attending ground but its perfectly round almost symmetrical form drew my eyes to it. I looked to my route plan and realised I would be crossing over it very soon. First though I had to come down from the heath which was a reluctant departure. I vowed I would be back, to enjoy walking the wonderful paths much more and to seek out the Adders. My path took me directly towards the coast and close past the remains of an Augustine Priory though a high wooden fence precluded me seeing any evidence of it. Next I crossed the Norfolk coast railway line and walked towards Beeston Bump. Doing so led me on to the Beeston Regis Nature Trail. Another information board told me to look out for: Flora - Dog Rose, Common Poppy and Red Campion which I guessed would now be out of flower and not easy to spot. and as for Fauna - Dunnock, Meadow Pipit and Gatekeeper. The two bird species will have surely flown the nest. As for the Gatekeeper; I had seen Butterflies at intervals all day. Perhaps I had seen one. Leaving the thought of Flora and Fauna behind with Springtime being the better option for being attentive towards them I focused on my walk and the impending short steep climb of about 30 metres up Beeston Bump. Wooden steps helped me make the ascent which when completed was rewarded with my second great view over Sheringham, this one a closer experience. Now I could see beyond the town and over the riches of the Norfolk coast stretching beyond to the west and towards Blakeney Point. 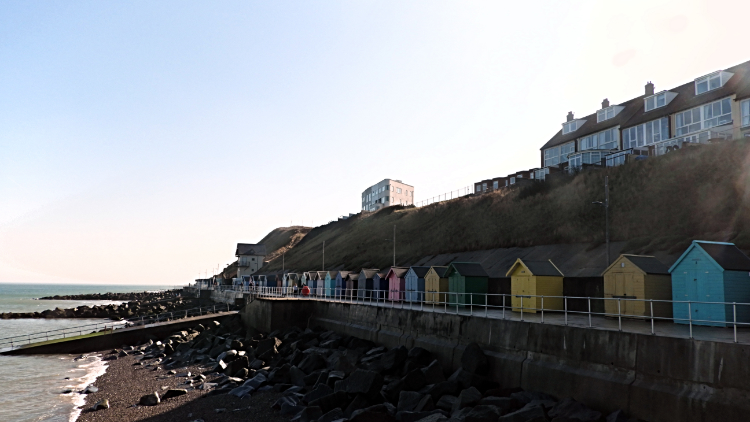 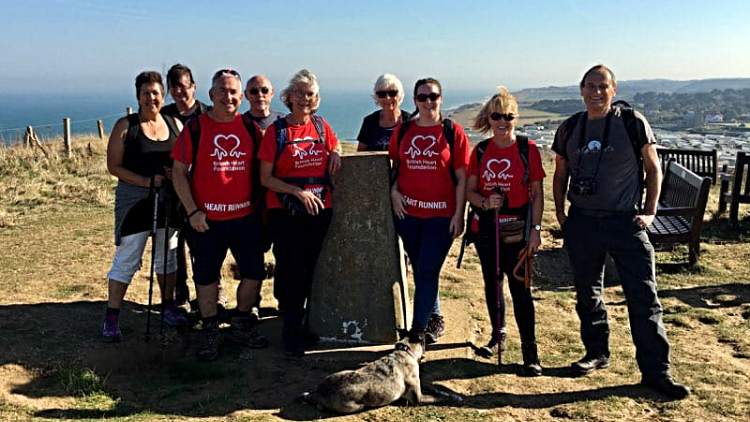 Me, Hilary Cox and the gang on Beeston Bump

I was on time to meet the group of charity walkers Amanda had arranged for me to walk back to Cromer with. First and foremost was the formidable Hilary Cox who was about to complete the Peddars Way and Norfolk Coast Path by a mix of cycling and walking. It was her last day on the trail and I was delighted for the privilege to walk in with her and her friends. All proved to be lovely people, one of them being Gin who runs Margins Walking and Glamping Holidays. Good for her, working in dedicated fashion to encourage people to come and enjoy this unheralded corner of England; in walking quarters that is. As for Hilary, she is one of the most active people acting for Walk Cromer, another organisation working hard to draw people like me to North Norfolk. Hilary is remarkable. Also an MBE, the honour gained for lifelong dedication to her local ward, she has boundless energy. After meeting everyone and after refreshments we were on our way, first climbing up Beeston Bump, second time for me of course, and taking the usual hilltop summit photograph. At the trig point of course. 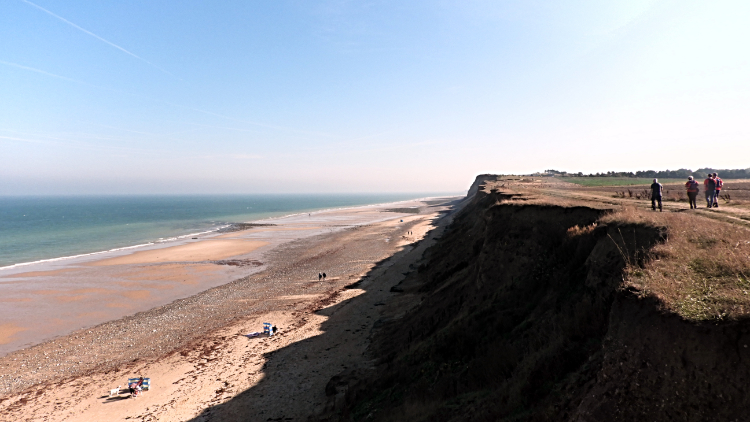 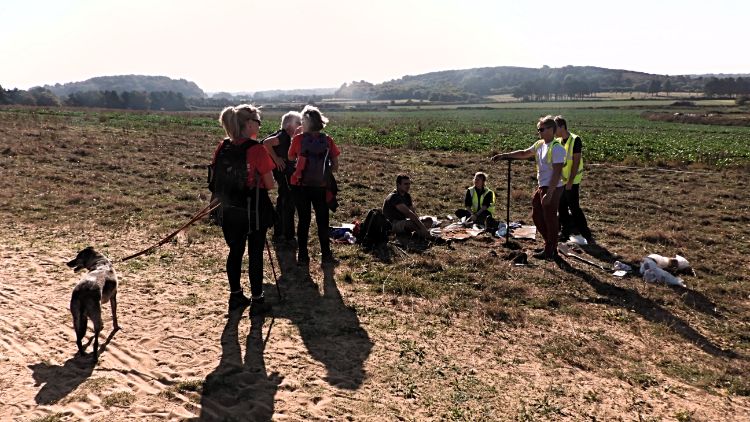 Next followed a big skies walk along Norfolk's Cretaceous coast. One of the ladies accompanying Hilary told me this stretch of coastline between Sheringham and Cromer has revealed some notable fossil finds. In particular she told me that around Sheringham I should look out for fossilised coral and around East Runton where we were heading to now, it is the best place to find Mammoth remains. After storms which have washed away sections of cliff on this sandy erosive coast people often find a piece of Mammoth, perhaps tooth or tusk. I did know the North Sea is a rich picking ground for Mammoth who used to migrate from mainland Europe to Britain and back when they were part of the same land mass so the chances of making such finds her make common sense. Rather than drop down from cliff top to beach line though we continued on and across Wood Hill where we met a team of students from the University of Portsmouth who told us they were doing Level 2 Fieldwork as part of their School of Earth and Environmental Sciences Degrees. Perhaps they would find a Mammoth tooth? After chatting with the students for a short while we did some fieldwork of our own. It involved us departing for the intended finish to the walk along the Norfolk Coast path to Cromer from East Runton Gap. 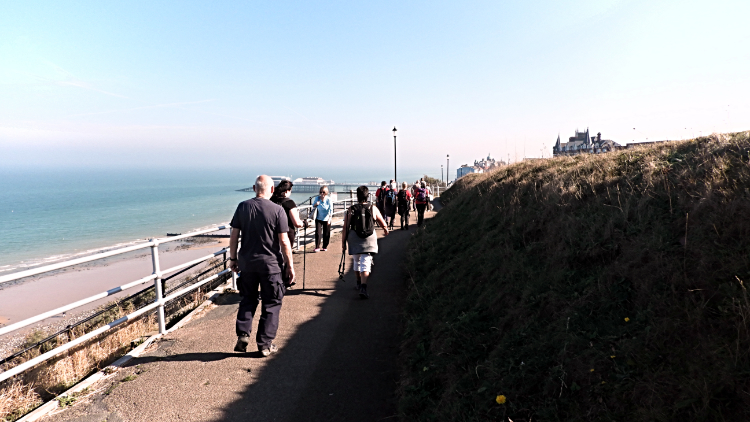 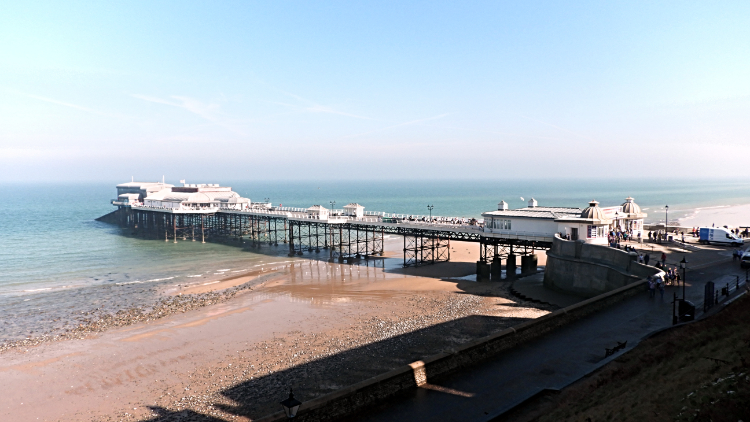 Gin explained it to me. The cliffs had suffered some extensive erosion over the previous winter and spring. Remember the Beast from the East weather event? As a result of the winter and ensuing springtime storms some of the coast path had gone. Literally fallen into the sea. So we were obliged to walk away from the coastline at East Runton Gap and walk a short while on the A149 roadside footpath to Cromer. The first bit was a little uncomfortable, hemmed in close to the road by house frontages but after a quarter mile or so spell of single file walking we could spread out again to amble and talk over the final stage of the walk, first across a seafront park and then along the West Promenade of Cromer leading towards Cromer Pier, the towns famous centerpiece. The pier is Grade II listed and quite rightly too. It is one of the finest in all of England and a pretty sight to draw me to the conclusion of my thrilling walk. 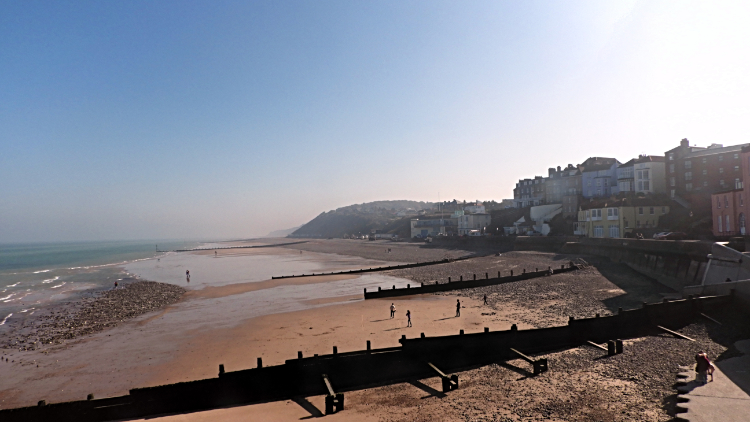 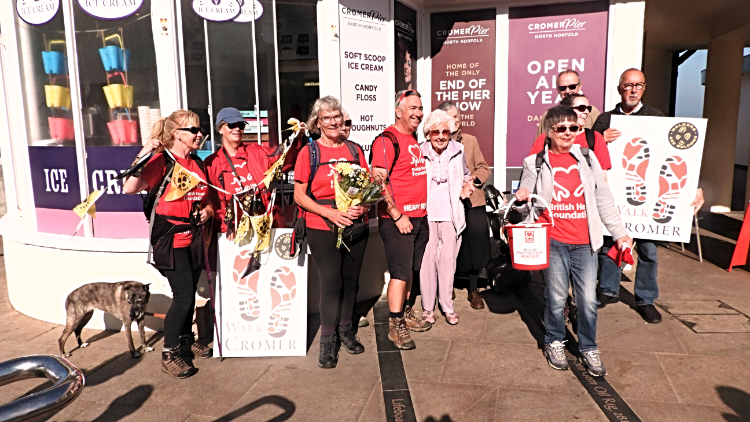 Celebrating the finish of the walk

I followed Hilary and her supporters down to the pier, the finishing point of her epic Nation Trail ride/ walk. It was right to do so. As we neared I could see a small group of people waiting to greet her by the pier, all bedecked with flags and banners. Hilary and the team had been walking for the British Heart Foundation so well done to each and every one of them for completing their individual goals. On saying a final well done to Hilary and after making a humble donation of my own I sidled off to let the group enjoy their well earned attention. I walked on to the pier and looked eastwards across the extensive reach of Cromer Sands. As I did so I contemplated on the walk just done, a great mix of natural environments and each so interesting. I thought of the lovely friendly people I had met and who I had enjoyed walking with. I thought of the generosity of Amanda and the team who had invited me to come here in the first place. I thought how lucky I was.