Summary: This walk is one of the most popular in the Lake District, if not in whole then certainly in part. Even on a cloudy midweek day I came across many walkers enjoying the lovely fell and lakeside walk. It is not surprising to understand why the walk is so popular as Loughrigg Fell is home to many paths to explore and always full of interest while Rydal Water is always lovely to walk beside and a short walk on its own for the less active rambler.

The Walk: This was a walk I had wanted to do for some time but usually when in the Lake District I would be in the company of friends doing pre-planned walks of longer distance and thus requiring higher effort. My visit to the Lakes this time was no different but at least I had the opportunity to fill in a shorter walk when arriving in Rydal in mid afternoon with a planned walk on the high fells the next day. Loughrigg Fell had eluded me once before when I took a walk from Ambleside to Loughrigg Tarn; I missed it because I simply had not planned in advance and I was not aware of it. This time I was not to make the same mistake again. 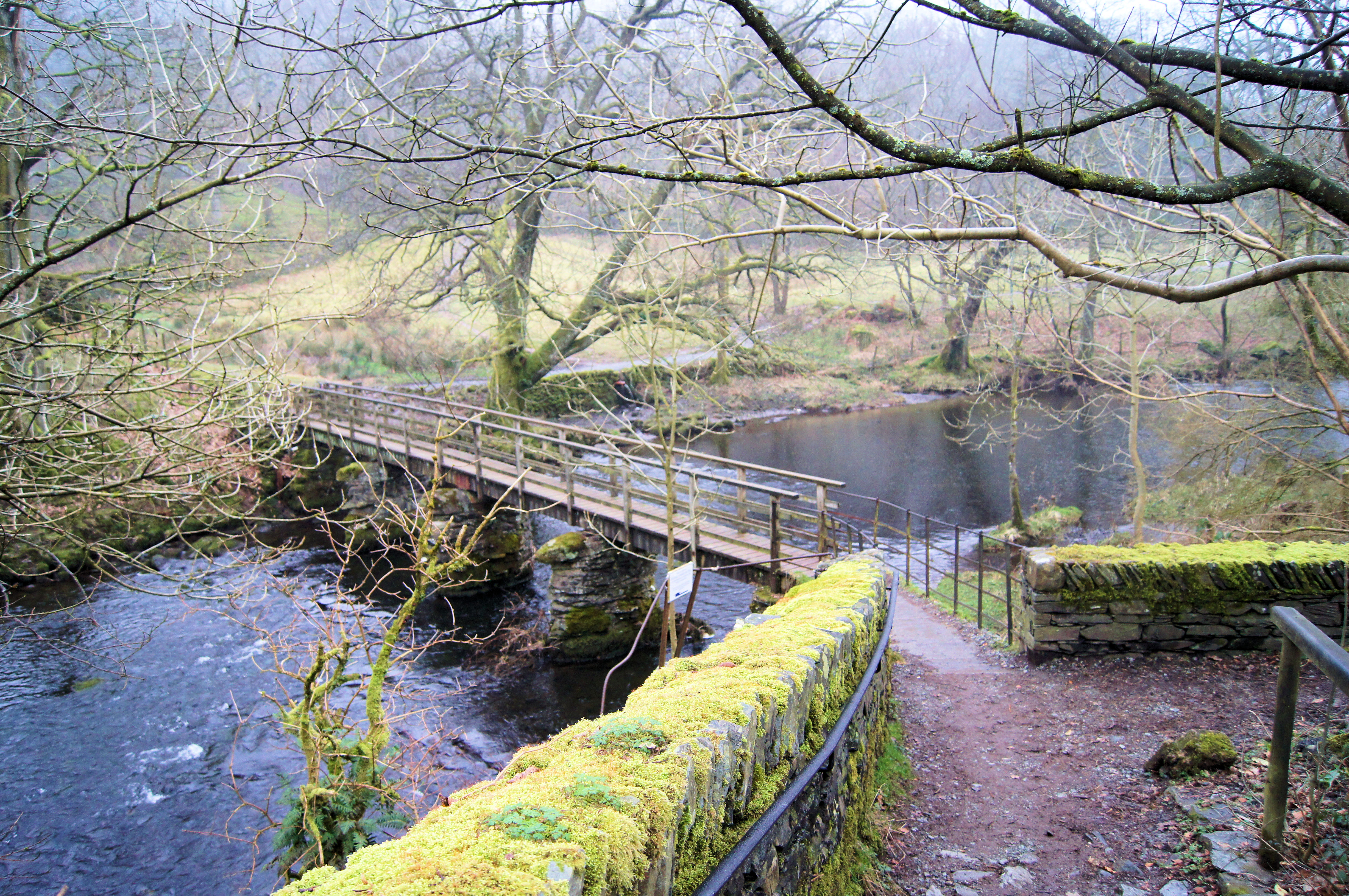 Footbridge over the River Rothay at Rydal 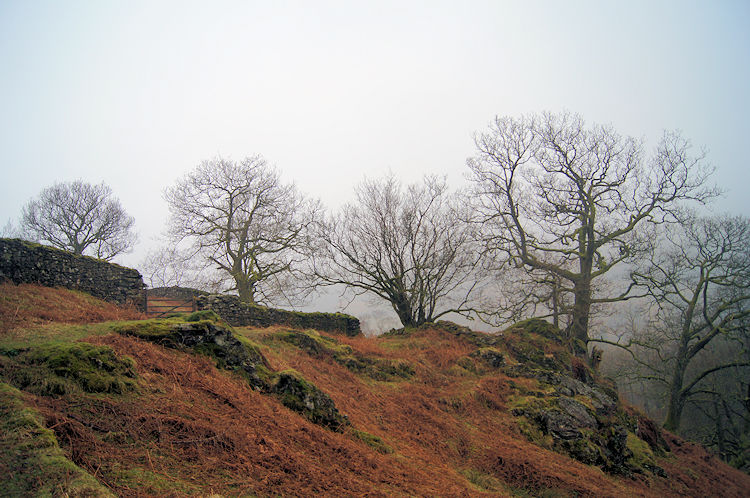 Ascending from Cote How to Loughrigg Fell

I started my walk from the roadside to Rydal Mount beside the church in the days when parking was free. Now you will need to park at Pelter Bridge (Grid Reference: NY 365 059). Set off from there which means you will not have to cross the A591. As for my starting point I was grateful for the cheap parking and I made my way down the road with a smile. I even refused to scowl at the weather which had closed in on the Lake District while the rest of England bathed itself in early March sunshine. On driving over from the Midlands I had hoped for better but I hit the bank of cloud at Lancaster and it hung over Cumbria with resolve to stay hanging over the National Park. Not to be put off I continued over the A591 briskly while contemplating taking some mood filled photographs of the Loughrigg Fell. I continued over the road and left the roadside footpath by a gate opposite the Badger's Bar pub. Once through the gate I was in prime Lake District walking scenery and I made my way down a path which took me over a footbridge across the River Rothay Then I continued on a steep climb through woodland to a gate which took me through another gate and to Cote How from where I zigzagged on a path up to Brant Brows and up further to the fell beside Rough Intake wood. I did pause on my ascent though for a Blue Tit kept me entertained by hopping between fallen branches and ground rocks, moving with me as I slowly paced up the fell side. 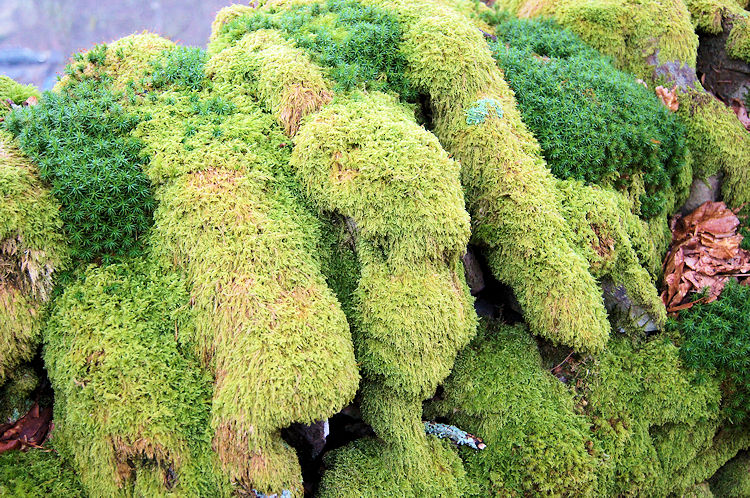 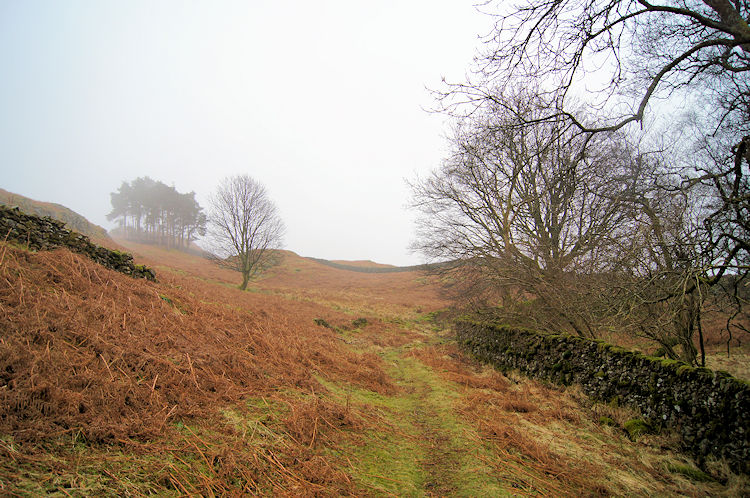 Into the open on Loughrigg Fell

As I walked along the path by Rough Intake I was captivated by the brilliant green moss that had taken root on the drystone wall between the wood and fell. The line of moss on the wall led me along and further up the fell until Rough Intake was left behind and I emerged onto the wide open fell. I looked right down towards Jobson Close and Rydal Water. I should have seen it but could not as the cloud was filling in quickly. As I climbed it got denser. 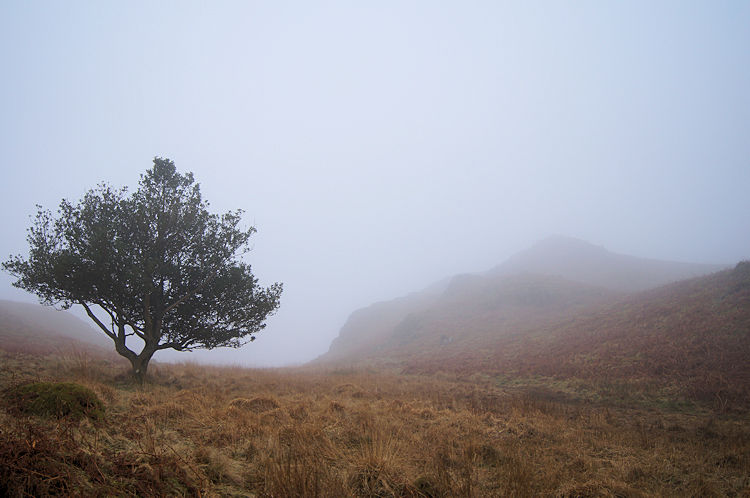 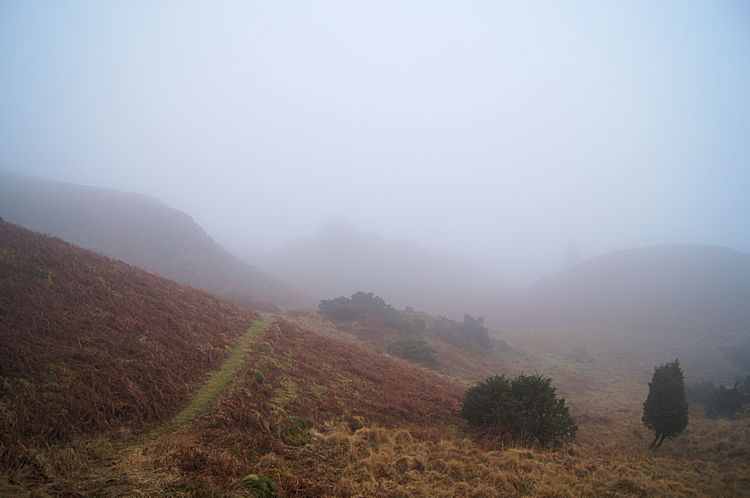 I think that is the way ahead

The walk took on an eerie feel. Soon after leaving Rough Intake behind a met a lady exercising her dog. We discussed the cloud filled environment we were in the midst of. She told me she had been up on the fell since mid morning and then it was clear with blue sky above a free of cloud. She watched it float in about two hours earlier. Oh well I thought, can't have it perfect every time and at least the cloud has given the fell a wonderful atmosphere. I walked steadily and checked map and GPS frequently as there were paths going off in every direction. It was clear to me that Loughrigg Fell is a place often explored by all types of walker. I imagined as a young walker I would have taken paths here, there and everywhere to fully explore the fell, which is what the young have tendency to do. And why not, here the terrain is not imposing, just delightfully inviting with small hills, rills and small waterfalls, rocky crags and trees, some solitary and some in small copses strewn all over the fell. 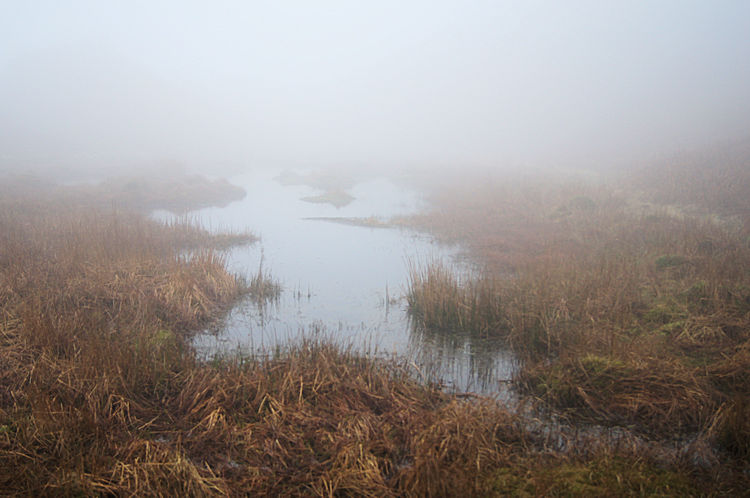 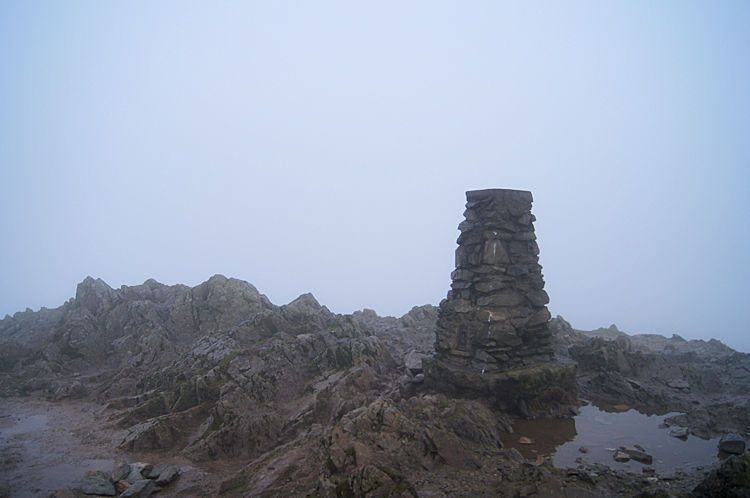 The summit of Loughrigg Fell

I admit I did make some minor errors during my ascent of the fell. As I climbed more paths came and went, some of which I followed to dead ends. Visibility was near to nothing and I often came across other walkers suddenly, hearing them before I saw them. Groups of walkers were with maps on a micro mapping course. Most were lost and trying to find their way to their next precisely orientated location. Some were even giving up and one single walker, a young lady asked me for directions to get off the fell as quickly as she could. "I would not be here at all but my father, a keen walker encouraged me to take the course" she said. I reassured her that I was an experienced walker who often walked alone but the conditions we were walking in and coupled with the many paths on the fell was a mixture bound to mislead and confuse. Luckily I had my GPS as backup and with it showing the summit trig point cairn was only 50 metres away then she could follow a path south east then due east straight back to Ambleside to which she was bound. Taking a compass bearing she headed off on the right path and in the right direction. Soon she disappeared into the cloud. I continued up to the summit and there met a group of American tourists, also lost who resolved to follow me off the fell. 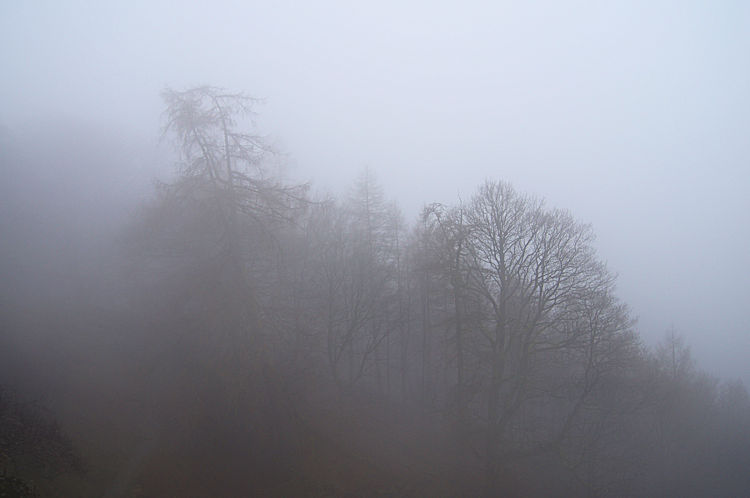 Treetops appear out of the gloom 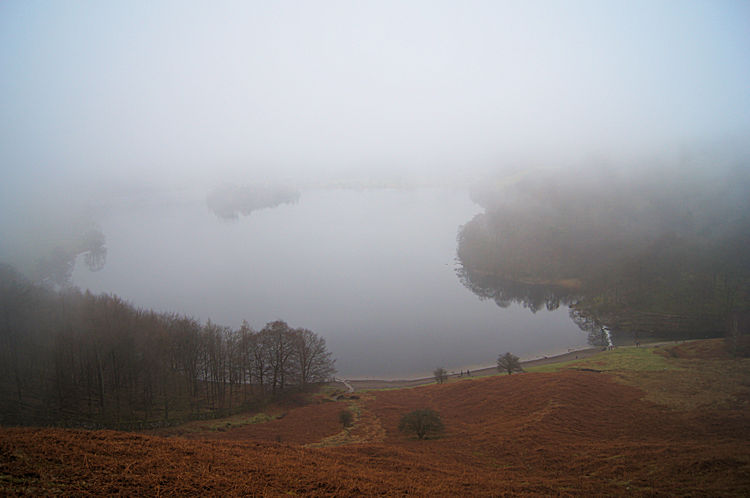 Descending to Loughrigg Terrace and a glimpse of Grasmere

The climb up to the summit of Loughrigg Fell had been great fun despite the lack of views available. The closing in of the weather had made it so romantic for me, so atmospheric as alluded to earlier and at the summit, even without any widespread panorama to enjoy, I was happy. Due to my meandering up the fell though time was now pressing on so I made my way down by following an obvious path due north to Ewe Crag. The American contingent followed close behind. From Ewe Crag I veered slightly on a north west course to Loughrigg Terrace and while descending I suddenly stopped in my tracks. I was coming out of the cloud base and I was transfixed by a view of tree tops and Grasmere Lake immediately below me. It was an awesome moment for me, what I looked directly toward is shown in the photograph above. It had me hooked for quite a while. 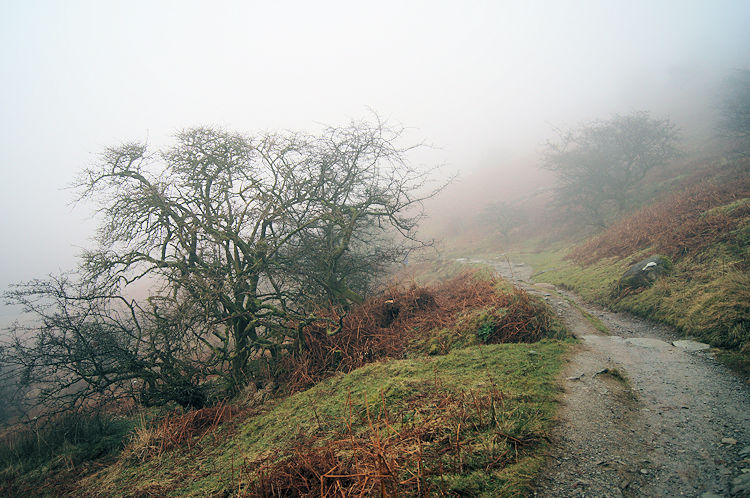 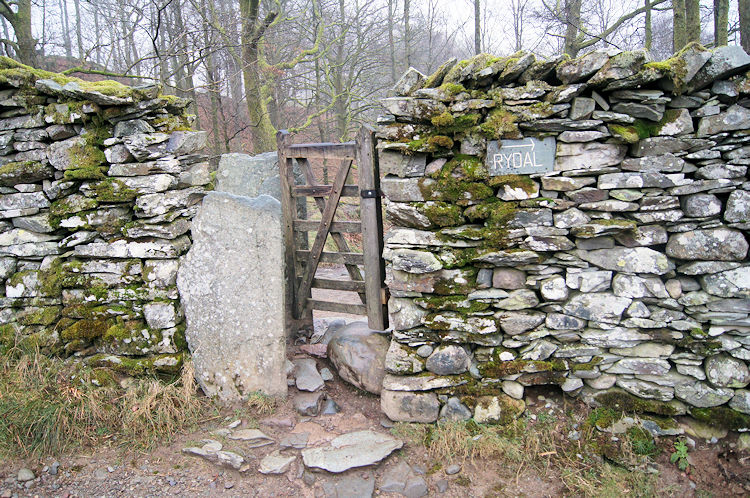 Gateway, a fusion of stone and wood

Once I recovered from my transfixed state I stepped down off the fell and onto Rydal Terrace. I noticed the Americans who had followed me off the fell were now ahead of me and taking rest on a seat beside the terrace. I passed them and said goodbye. They reciprocated as I continued along Rydal Terrace and distanced myself from the cloud which was now showing the first signs of rising. While walking along the path I looked left to the eastern edge of Grasmere Lake and to the watercourse linking it to Rydal Water. Further on I passed an interesting gate which was linked to two vertical flat stones making it a kissing gate. A great fusion of stone and wood. 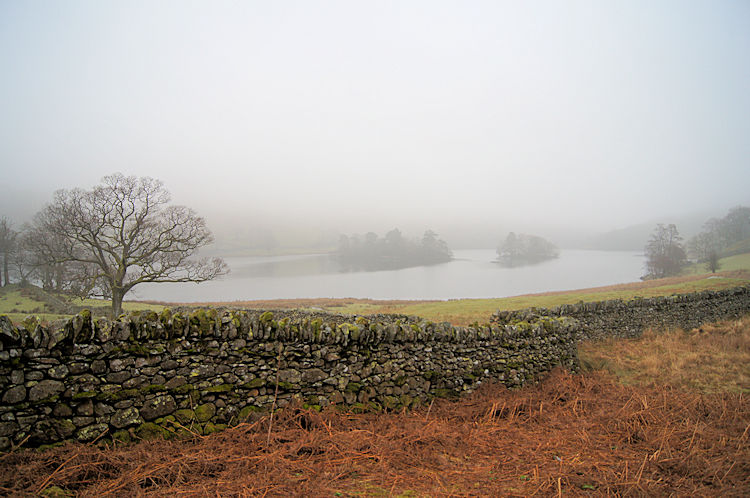 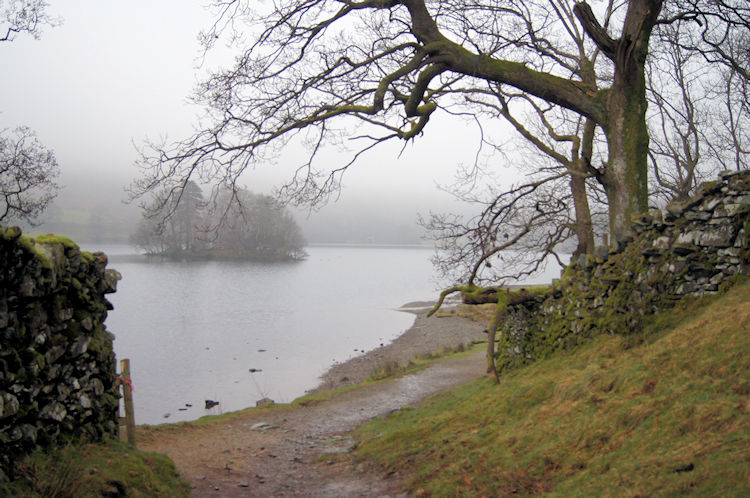 I continued walking on toward the edge of Rydal Water which was now starting to dominate the scene. I did not reach the edge of the water until Jobson Close which I should have seen earlier on in my walk when I had left the edge of Rough Intake. Now I could see what I had missed. The views across Rydal Water were tremendous. The lake was a favourite place of the Lakeland Poets and William Wordsworth once lived at Rydal Mount drawing much of his inspiration from the tranquil setting. It was not difficult for me to imagine why. 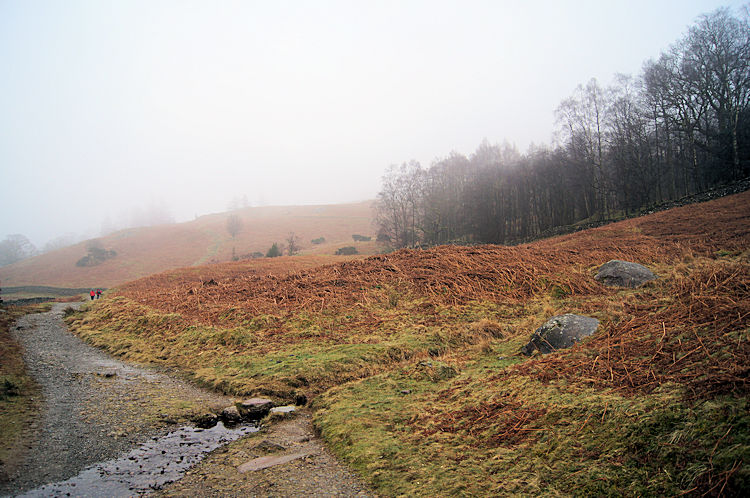 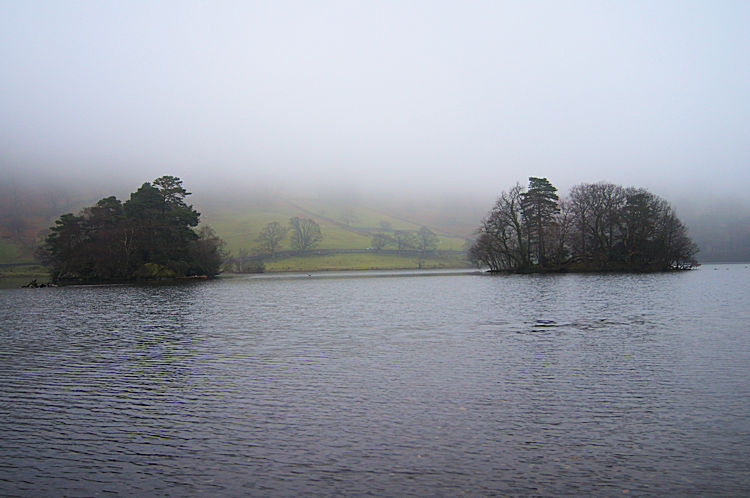 I ambled alongside Rydal Water, the day still had light and my accommodation for the evening could wait. I looked out over the lake to Geese, Ducks and other waterfowl being busy around the shores of Heron Island and Little Isle which are close to each other in the centre of Rydal Water. I could not see much further because the cloud was only slowly retreating but I did imagine looking up to Nab Scar across the water where Strolling Steve and I had camped after the Keswick to Rydal stage of my Great Britain North to South walk in 2011. Then it had been hot and balmy with midges infuriating us in the evening. No such problems for me today I mused. 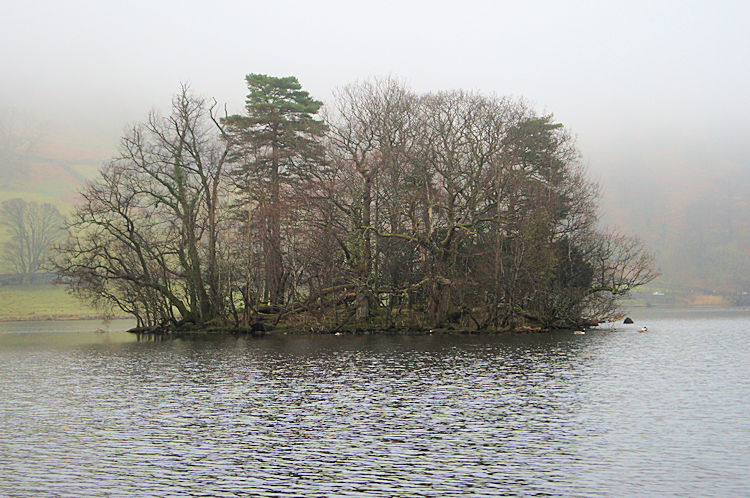 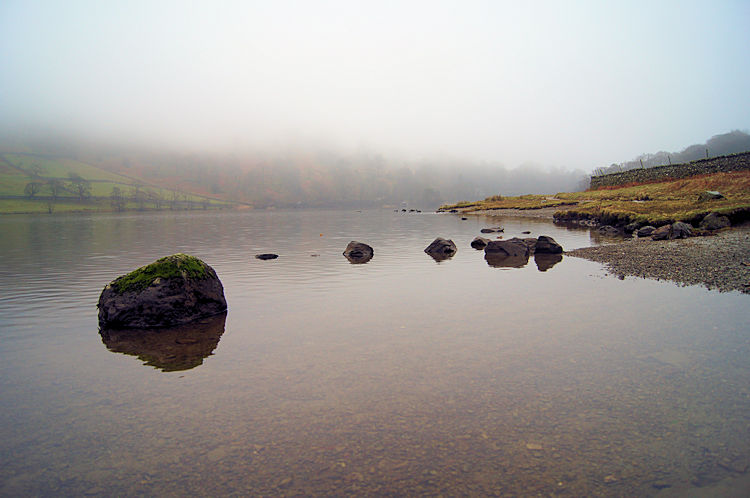 I walked slowly on past Jobson Close and toward Steps End but took time to leave the path for the waters edge to take the photograph of rocks in the water seen immediately above right. It was so peaceful, the water was dead calm and there were no walkers around to interrupt my amateur photographers concentration. I was pleased with the finished result and I felt it had been well worth the effort. 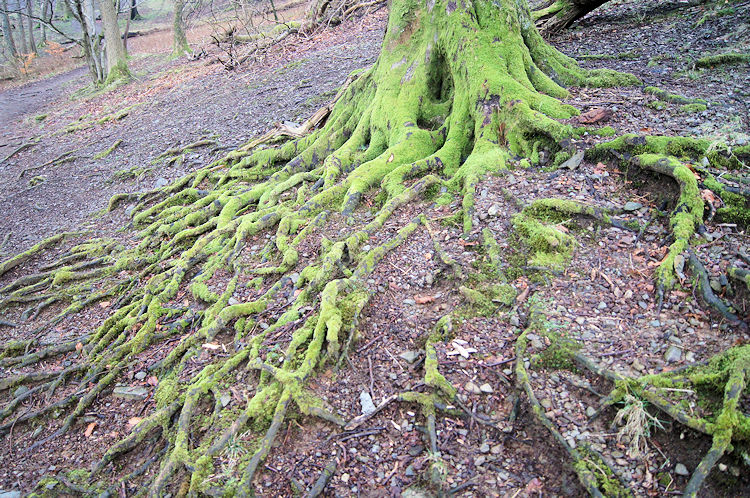 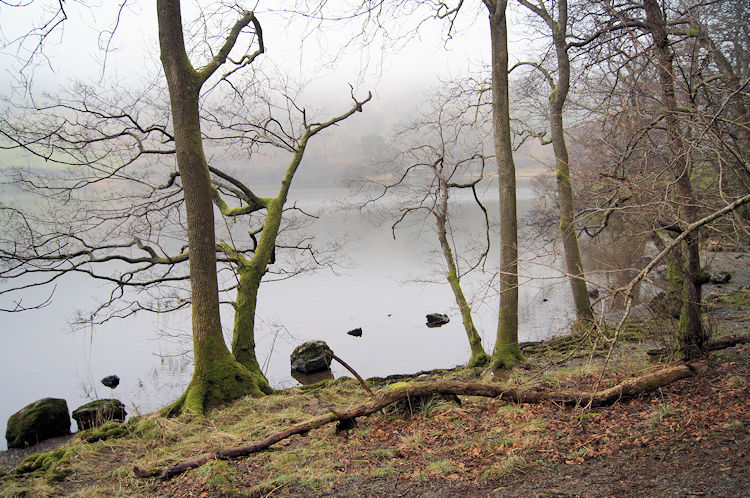 Looking back to Rydal Water at the end of the walk

Steps End is a lovely small wood on the south east shore of Rydal Water. Groups of people ambled in the woodland as did I. Trees were not yet showing the first green shoots of spring but the intricate shapes of their branches compensated amply as did their spread of root with moss giving a protective sheathed covering to roots that ventured above ground. As with walls, tree roots provide habitat for mosses here. After Leaving Steps End I continued on a path to a gate which marked my retracing of steps over the River Rothay footbridge and back to Rydal Mount. I had been out walking for just over two hours and in that time I had such adventure I would have on many longer walks. It was a walk to remember.