Summary: A walk in lush Lancashire countryside to ancient sites and deceiving follies with the River Ribble the central feature of the walk. It is full of interest throughout the whole adventure.

The Walk: I like to explore new places during my walks and after so many years of walking in the north of England there was one glaring omission I needed to put right. Having a vast knowledge of walks in Yorkshire, Cumbria and Derbyshire in particular it was apparent I needed to explore some walks in Lancashire. I had occasionally walked in the county in the past, first as a youngster on family trips to my cousins in the Rossendale area. However, since then the only Lancashire walk I had reported was Pendle Hill. So in 2014 I resolved to explore the rich culture of Lancashire by designing a series of walks in the country. This was the first I chose to do and so on one of the first delightful days of Spring I began my exploration of the county. 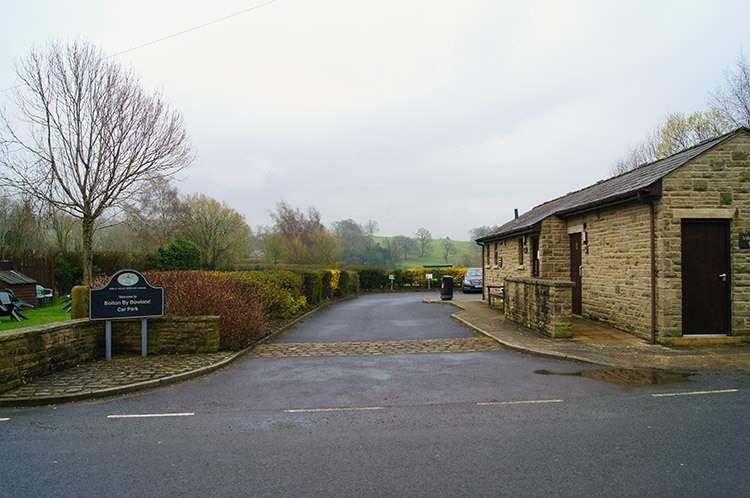 Conveniences and car park in Bolton by Bowland 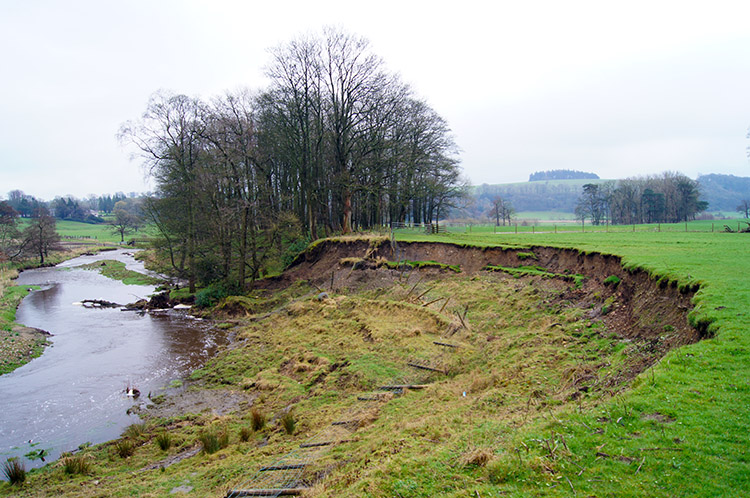 Field reduced in size by floods

I pass close to Bolton by Bowland many often while commuting from Yorkshire to north Lancashire on the A59 via Gisburn. Usually while on the journey I look south to the impressive outline of Pendle Hill. I never realised the delights that awaited me just beyond the commuter road to the south. Now I was to begin my new learning. The first thing I found out when driving into Bolton by Bowland was a surprise. The traditional milepost in the village centre indicated I was in fact in Yorkshire. Indeed I would have been in the past as before 1974 the village was part of Bowland Rural District in the West Riding of Yorkshire. Now the village lies well within the boundaries of Lancashire so my quest was upheld, I was legitimately beginning further exploration of the rights of way in Lancashire. I began that quest by crossing Skirden Bridge at the west end of the village and after doing so I followed a bridleway south to Bobbin Plantation from where I left the bridleway and crossed fields in a due south direction in the general direction of Sawley. I was promised a sunny day and I could see the cloud lifting and thinning thought it remained dull as I walked across fields running beside Skirden Beck on its course into the Ribble. Some points on the course of the beck had shown the impact of the winter 2013-2014 floods were not confined to the south and west. One particular field had lost a good deal of ground by beck side collapse and other fields were still partly waterlogged. 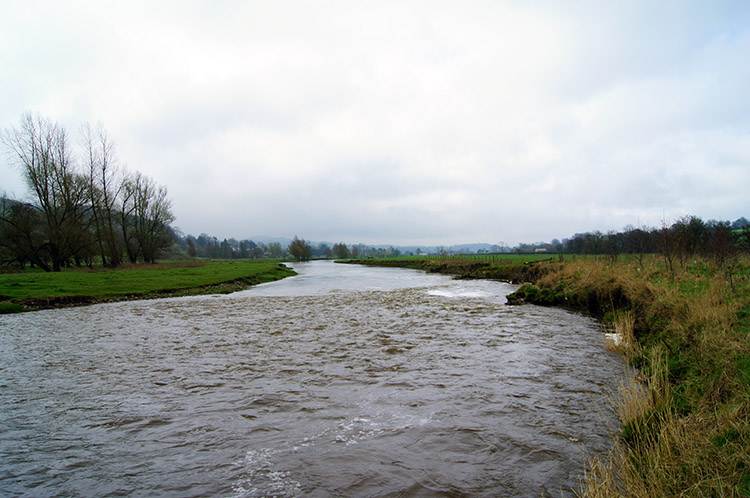 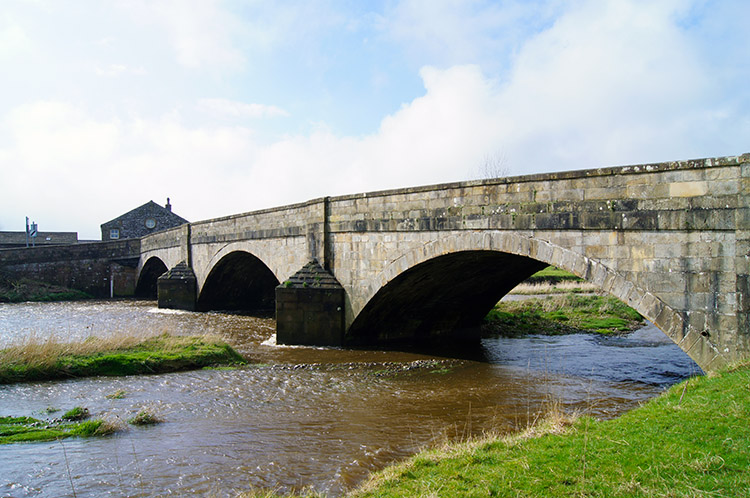 When I reached the end of Skirden Beck at the point it flowed into the River Ribble the first glint of sunshine came through. I could also see patches of blue sky opening wider as the grey skies parted. The signs were good. I imagined there would need to be quite a bit of prolonged sunshine to dry the ground and slow the pace of the becks and rivers. It had been a very wet winter. Those thoughts left my mind as I walked across a large open field towards Sawley. I focused on Sawley Bridge and the sun continued to win through the cloud warming my face. 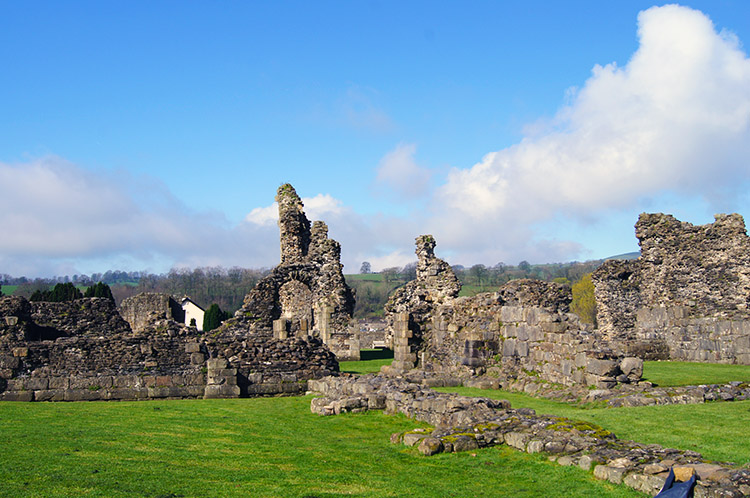 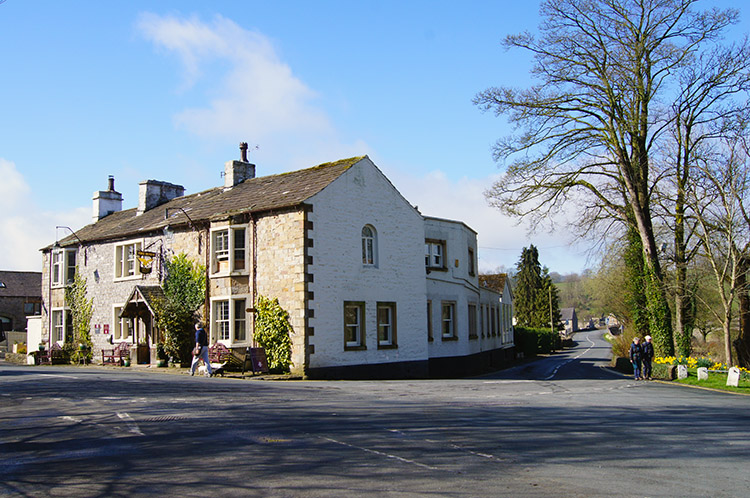 I reached the bridge and walked into Sawley village by crossing it. The blue sky was now in total domination, a remarkable transformation in less than 15 minutes. An appreciable increase in temperature came as I walked through the village, first along the long riverside street and then as I rounded the corner by the Spread Eagle in order to visit Sawley Abbey, a Cistercian abbey founded in 1148 and subject to Henry VIII's dissolution in 1536. Apparently the monks here would not take no for an answer though. They remained in possession until their insurrection's collapse the following year after the execution of their abbot William Trafford. I could not imagine such a black moment in time on a bright Spring day - the abbey was bathed in sunshine and was all peace and calm as I walked around the grounds and explored the remaining architecture. 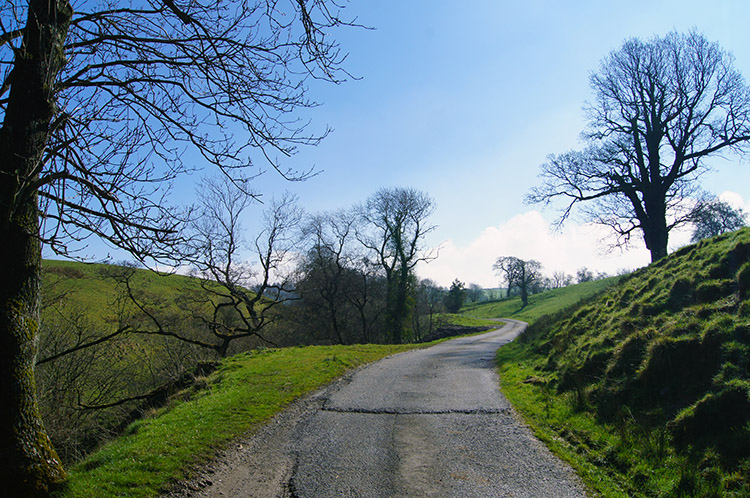 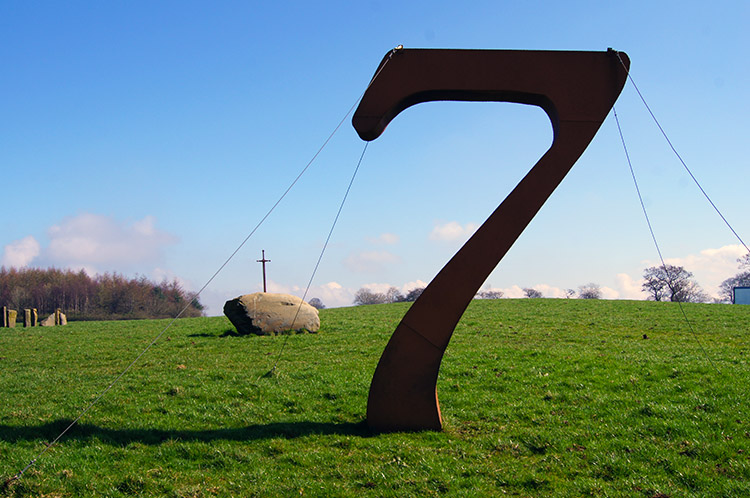 Lucky 7 and Sword in the Stone

I left Sawley by returning to the riverside by the Spread Eagle and then walking north east on the Ribble Way to Dockber. This mile of walking was the most significant climb of the whole walk as I made eighty metres of ascent in a mile of walking but it was hardly noticeable. The climb did give me the best views of the day though. To the south I could see Pendle Hill trying to pop out of the remaining cloud and to the north I could see across to fells of the Forest of Bowland. After passing Dockber Farm I spotted a huge number 7 in the near distance. What was I approaching? 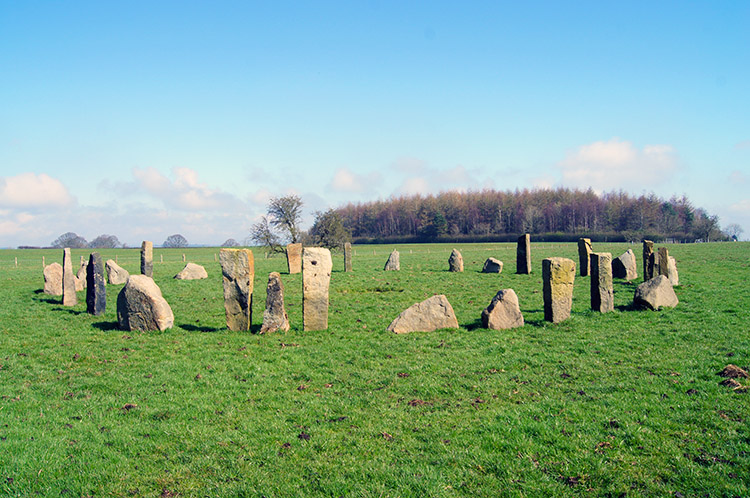 Not such an old stone circle 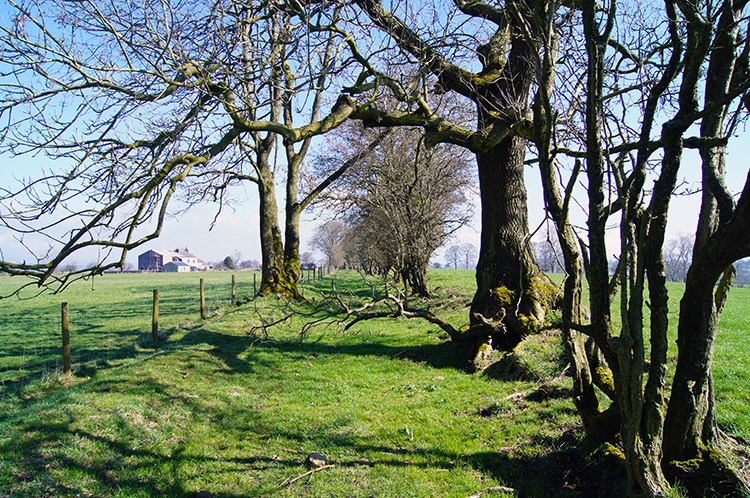 I reached the number 7, an iron structure supported by stays. Nearly was a sword in a stone and near to that a stone circle. Not an ancient one but a recent structure. I looked around and in a small copse nearby I found a village built of wooden structures including a church, several shops including a barbers, a hotel and a bar. It was very surreal indeed and only later during research did I realise I had stumbled across the site of the Beat Herder Festival. I was so pleased I had not come across the festival in full swing - no offence but I was on a nature and solitary adventure. And had the music being playing then the natural bird song I was enjoying would have been silenced. I continued on beyond the site of the Beat-Herder and followed fields and paths through tree avenues to Huggan Ings and then to Gisburn Cotes. 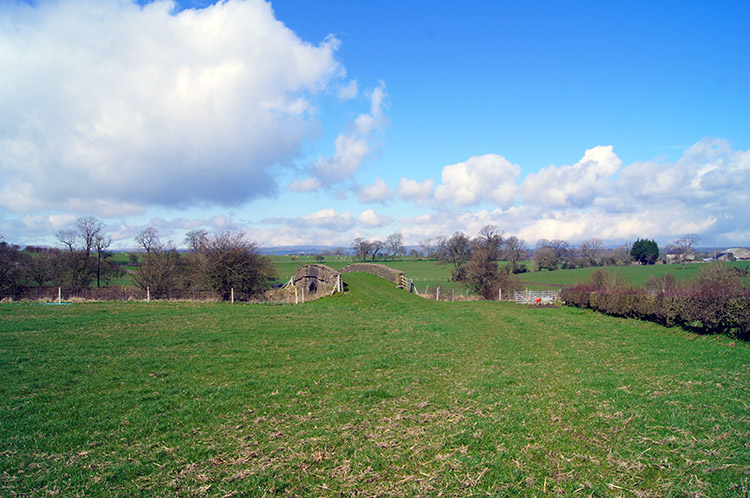 Railway crossing on the Ribble Way 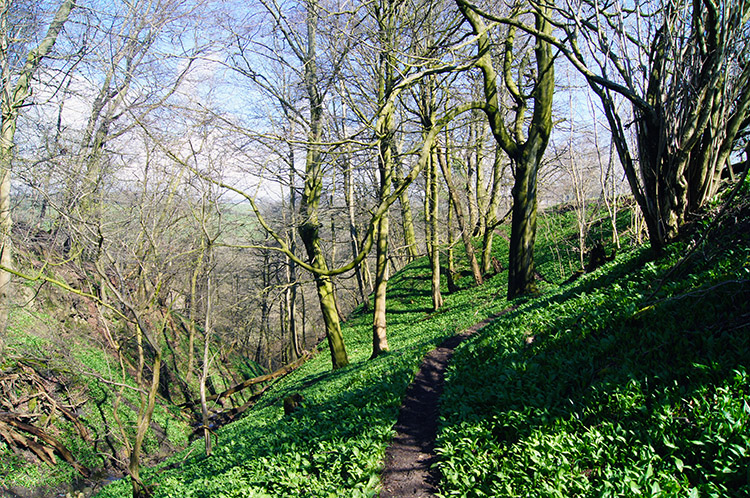 At Gisburn Cotes I crossed a railway bridge over the Ribble Valley Line which used to run from Manchester to Hellifield to link with the Settle to Carlisle railway. However the railway has stopped at Clitheroe since the Beeching cuts in 1962 so I was confused whet there were still tracks on the line. Further research explained that after a public campaign, the line between Blackburn and Clitheroe was reopened to regular passenger services in 1994 and an infrequent service was later reintroduced between Clitheroe and Hellifield. Hence the tracks. I saw no trains though as I crossed the railway not once but twice, returning to the north side of the line which took me on a course to Steep Wood. The description was apt, I made very careful steps as I descended 40 metres through the steep wood to the banks of the River Ribble. 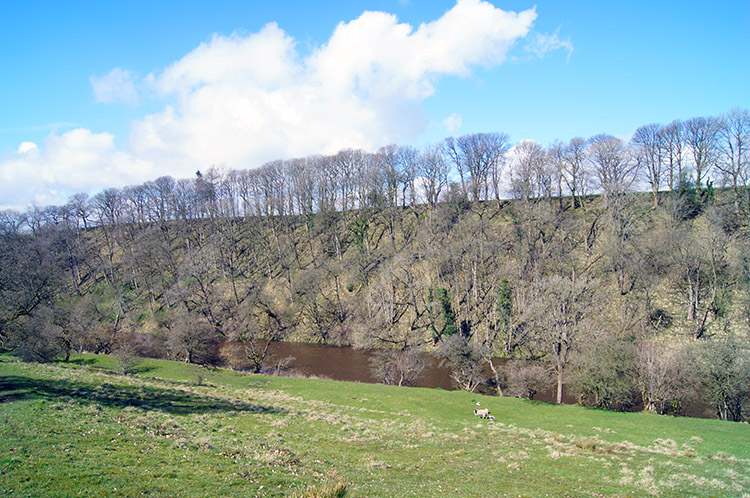 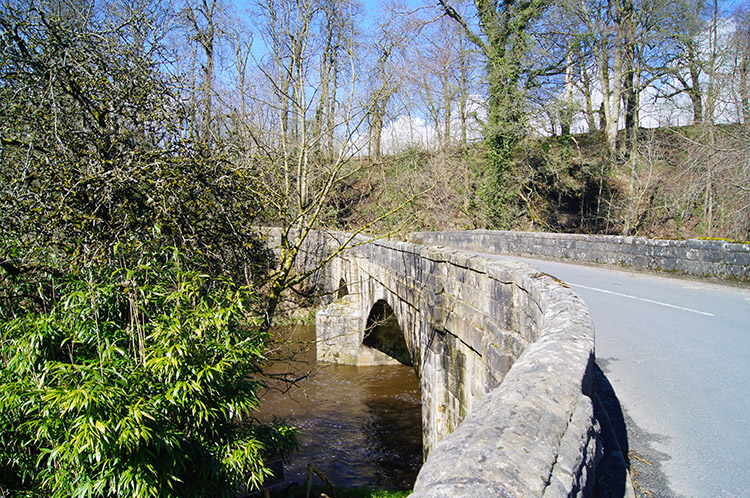 As it had been at the point Skirden Beck flowed into the river and as in Sawley the river was rushing along at quite a pace near Steep Wood. The map showed a ford at this point in the river and across on the other side I could see evidence of a path making directly into the river but there was no chance of fording the river this day had I wished to. Had I done so I would have been washed downstream back to Sawley Bridge. My course was east along the Ribble Way, sometimes near to the river but mostly on elevated ground to the south of the river. My walk took me past New Laithe, Wheatley, Higher Laithe and finally Coppice Farm before I reached the Gisburn Road to Bolton by Bowland which I followed to Gisburn Bridge. After crossing the Ribble at the bridge I followed the road a little more before leaving it at Park House. 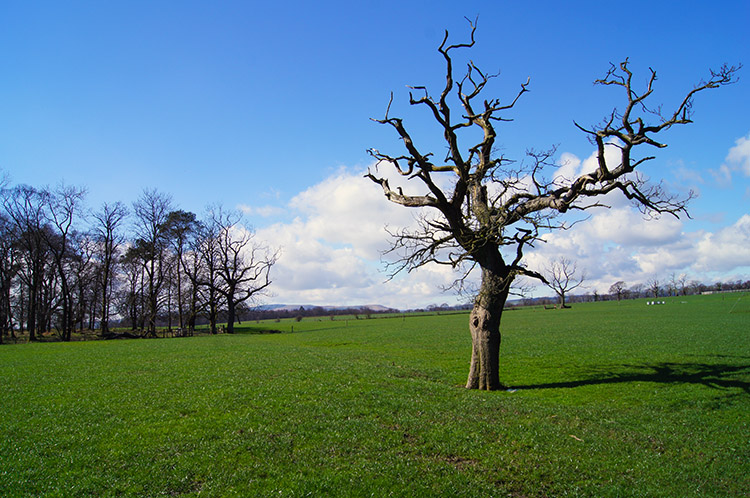 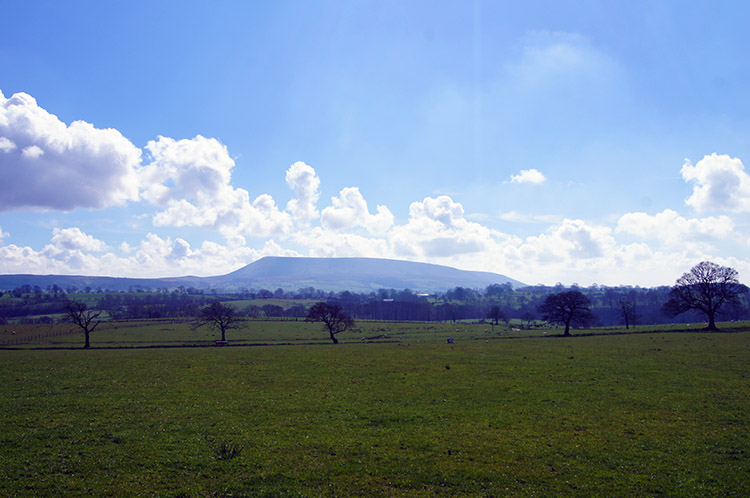 The day did everything to please, beaming down warm sunshine as I continued to revel on my new Lancashire walk. From Park House I crossed a field to Park House Beck and after negotiating it by way of a lovely footbridge I crossed a couple more fields to reach Bolton Close Plantation which I chose as my lunch stop. After enjoying a pretty long lunch in the surroundings of the woodland I continued my walk across lovely deep green fields which were supplemented by new grass growth. The fields were unusually large compared to most I walk across in my home area around Harrogate. Space is more generously provided here and this gave a more appreciative feeling of openness to the countryside. I looked across a vast open field to Pendle Hill which although still surrounded by cloud had shook of the immediate attention of them. 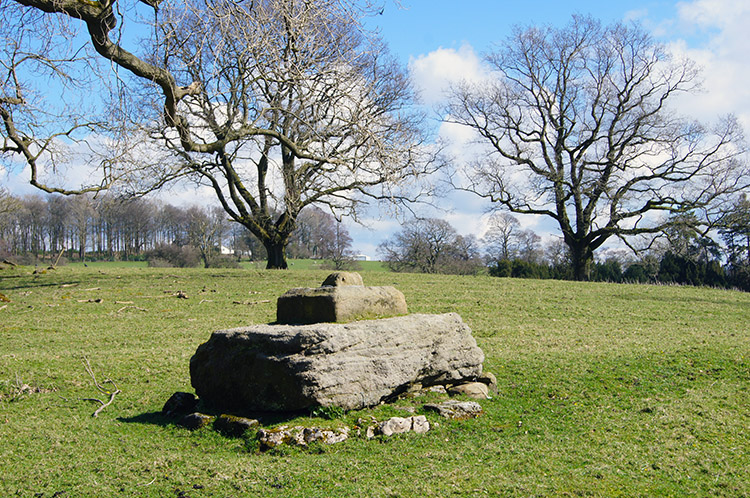 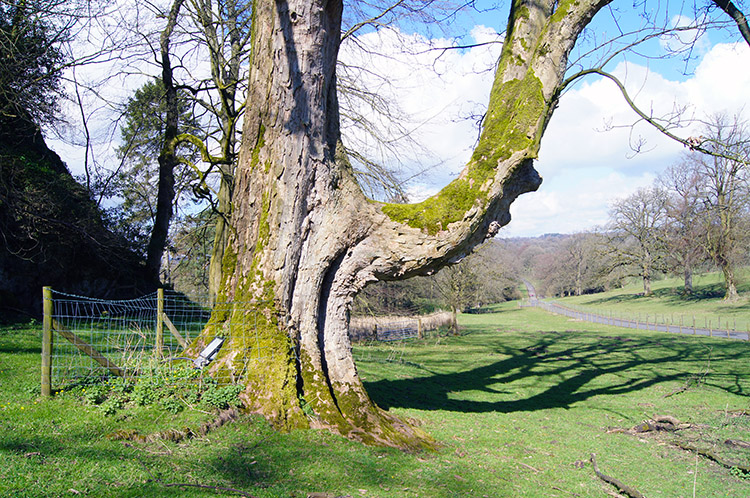 Tree near the site of St Marys Well

A series of large spacious fields took me along to Fooden Hall Farm and then I walked across more to pass close beside a series of small woods, in order and namely Low Wood, Grove Wood and Rainsber Wood. The woods were shielding me from the River Ribble just beyond them. After the three woods were behind me I reached Bolton Hall Farm which led me into Bolton Park. I expected a large mansion and instead found lots of conversions to private residences. The place was pristine though, all residences much loved and well cared for. I was drawn to a couple of points on the map, King Henry's Well and Cross (remains of). I am not sure I found the well but I found the plinth which used to support the cross. 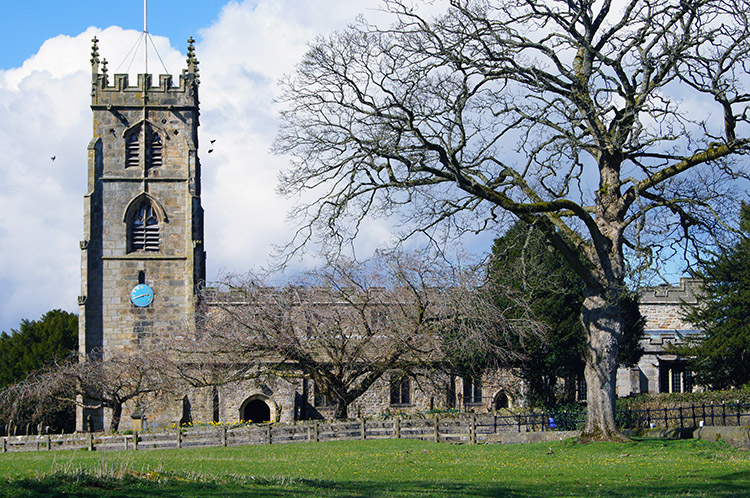 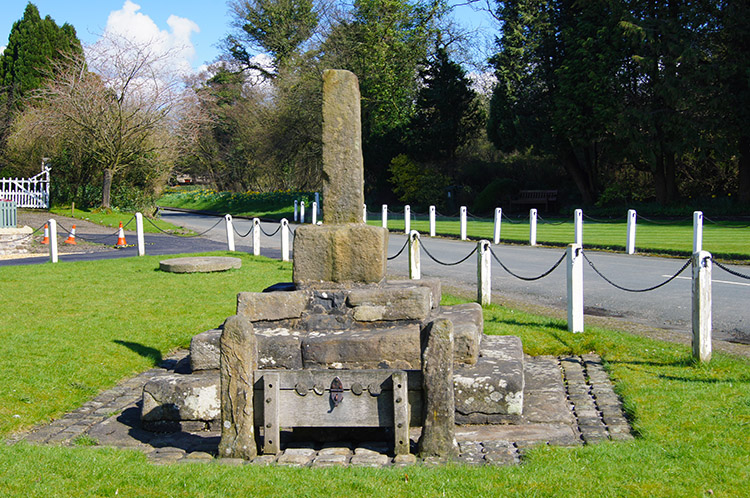 Site of old cross and stocks, Bolton by Bowland

I was reaching the end of my walk as I continued down the drive of Bolton Hall to the village of Bolton by Bowland As I approached I was drawn to the lovely church of St Peter and St Paul's. From the church I continued through the village at an amble as I did not want the walk to end abruptly. I took time to visit the war memorial and then the site of the old village cross and stocks. During this exploration of the village I spotted the old road sign and further research showed my the reference to West Yorkshire has previously been cut off - I am so pleased they restored it to its original condition. Whether this walk was in Yorkshire or Lancashire so what? The countryside of both counties is special and I love it all. And for the purposes of my new exploration I am so glad this was officially my first Lancashire walk of 2014. It is a beauty.