Summary: This walk is stunning with a great array of diversity in the five miles of walking in this lovely area of outstanding natural beauty. Starting by the northern edge of Morecambe Bay the circuit took me along a short stretch of urban paths to woodland and then across open fell to Arnside Knott where more woodland led me south to the coast at Far Arnside. Then a mix of coastline, woodland, open wetlands and fields took me on a course back to Arnside.

The Walk: Please note the coastline is tidal and that some of this walk may not be possible at high tide. Indeed there are some signs warning walkers of this. Check before attempting it - however I walked at a time of approaching or receding high tide and still the route was safe to follow. Best to pick a period of low tide to be sure though and to make your own determination. 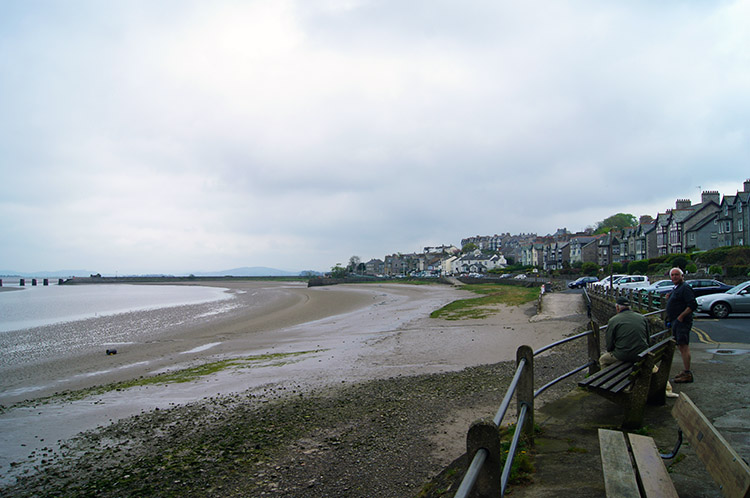 Arnside and the Kent Estuary 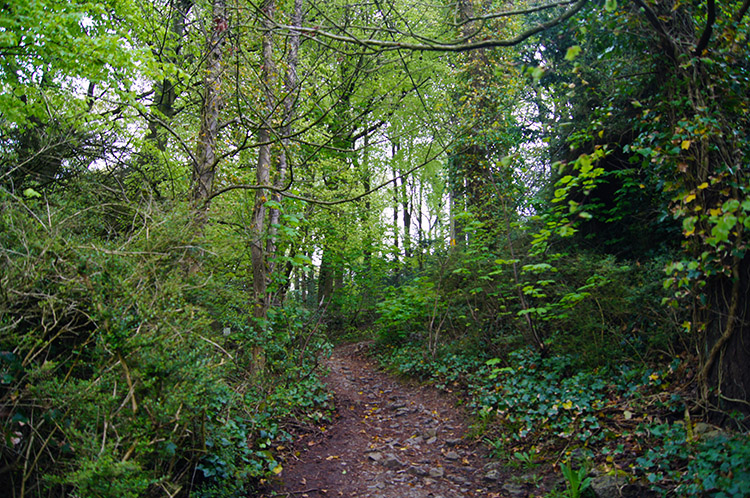 Woodland path up from the coast to High Arnside

I had looked doing a walk or two in the Arnside and Silverdale Area of Outstanding Natural Beauty for years. It had been too long between the first time the area came to my attention and actually visiting to do a walk. Monday 28th April 2014 was the day I finally got around to doing what I had put off for so long. And a good day it was too. Early morning cloud lifted and cleared as I drove across from Harrogate and by the time I had parked up in the free parking areas beside the bay at Arnside the first glints of sunshine were breaking their way through the cloud. It would not be long before sunshine I thought as I set off by following the coast path for about 200 yards to the Arnside Lifeboat Hut from where I broke away from the coastline and climbed on a path through a wood to Red Hills Road. 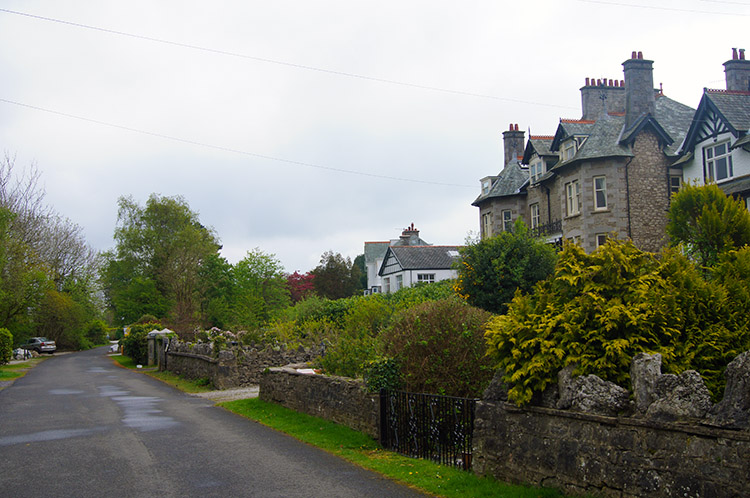 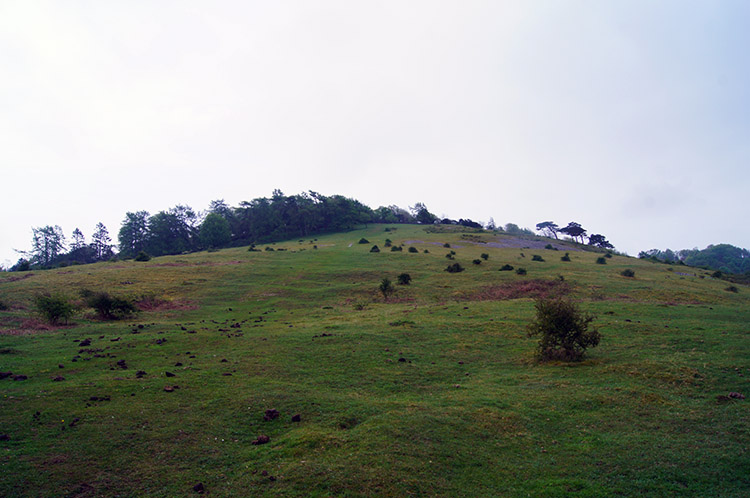 Red Hills Road led me to High Knott Road which I followed for its full length to reach Red Hills Wood. I followed the path uphill through the wood to reach the open pasture of Red Hills leading up to Arnside Knott. As I crossed the pasture on the climb to the summit of Arnside Knott the sunshine which had been promising since I had set off on the walk finally began to break through. First it created a haze as the final cloud was burnt off. 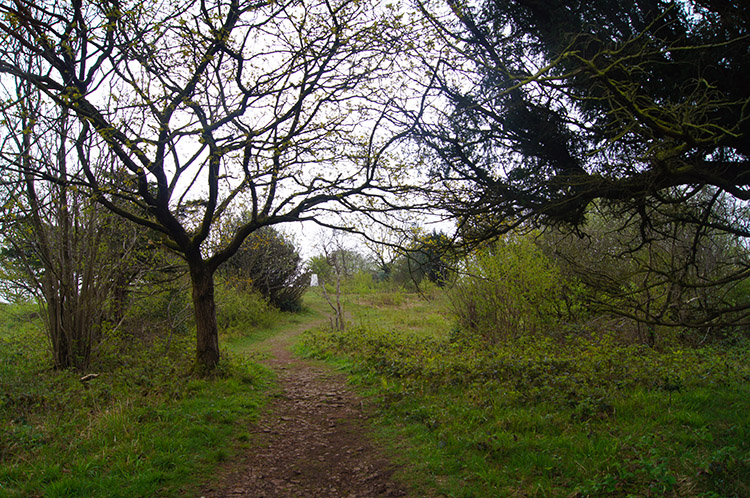 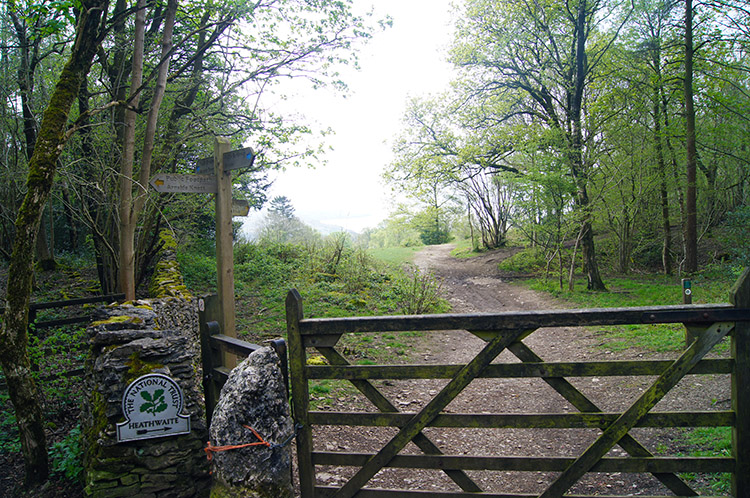 The path from Arnside Knott to Far Arnside

Fittingly the first real bathe of sunshine blessed me as I left the open pasture and walked through a gate to reach a path surrounded by scatterings of trees which led me to the trig point. I paused at the summit point for a while and listened quietly. A chorus of bird song became evident and my breath settled after the heave of the climb. The bird song was lovely and I ambled along from the trig point along paths through Arnside Knott Wood. Then I heard a rat-tat-tat-tat and stopped. Focusing my eyes in the direction of the noise I walked slowly and carefully towards it. The rat-tat-tat-tat continued and got louder. I inched closer still and then I was rewarded for my stealthy approach. The creator of the noise was a Great Spotted Woodpecker and I could see it clearly high up in a Silver Birch. He continued to tap away as I watched for at least two minutes before looking down on me and flying off towards Heathwaite. I was heading in that direction too. 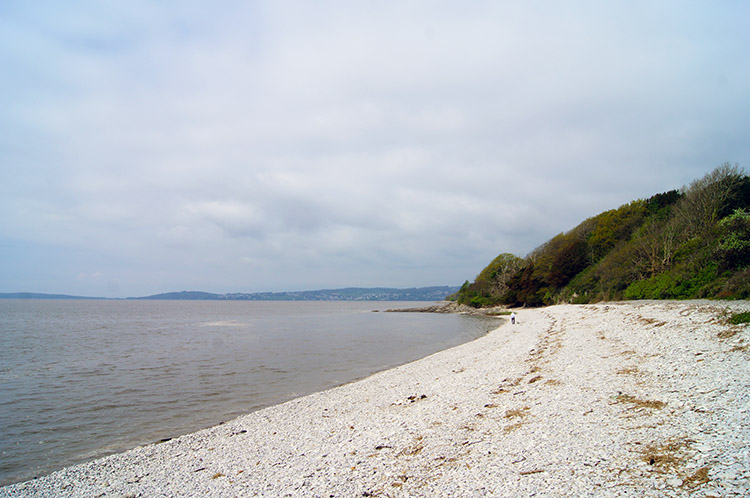 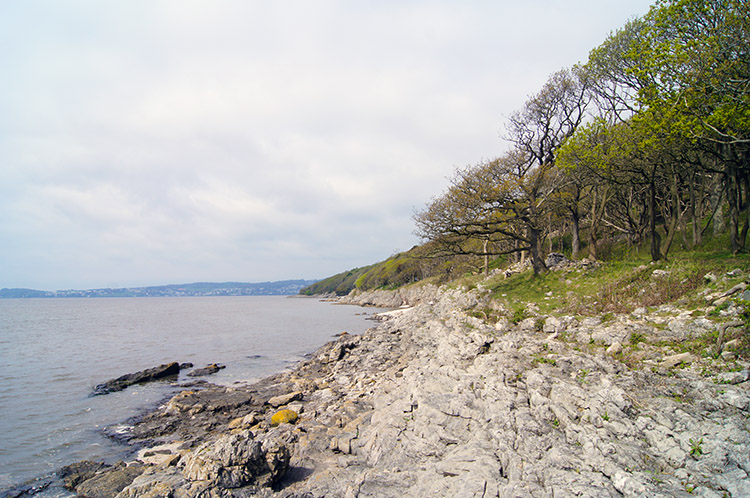 Walking the coastline of Far Arnside

As I walked on I thought that perhaps I would hear or see the woodpecker again as I walked from Arnside Knott Wood through Heathwaite towards the coastline at Far Arnside. But I did not, only the more musical bird song remained and not the drum accompaniment. After the woodland of Heathwaite I followed paths beside a couple of fields to Hollins Farm and from the farm I followed a quite road to a static caravan site at Far Arnside. I followed the path through the site to reach the estuary of the Kent Channel. The map showed a vast plain of sand but the bay was filled with water. It appeared the tide was more in than out. I walked along the gravel and shingle coastline as opposed to the woodland path I could have followed. It was warm by now and getting warmer still. the sunshine was well into its work of warming up the surroundings. I continued on the coast for half distance to Park Point before the gravel and shingle dwindled to nothing. After walking across a rocky outcrop the water closed me in and I was obliged to climb up to the woodland path. 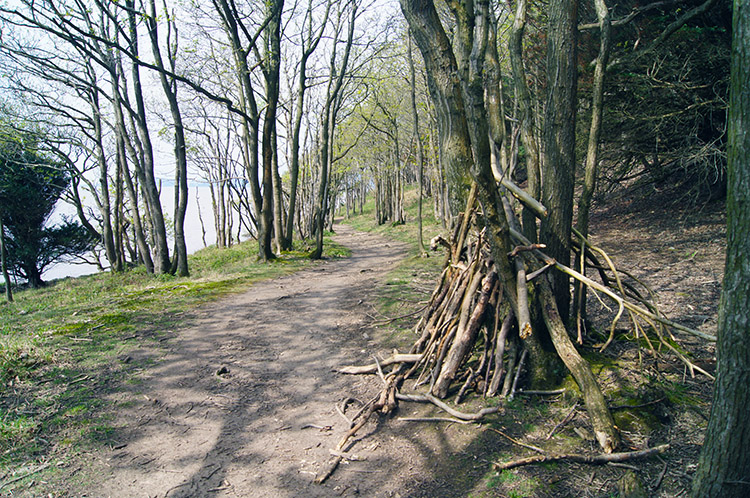 Woodland path beside the coast 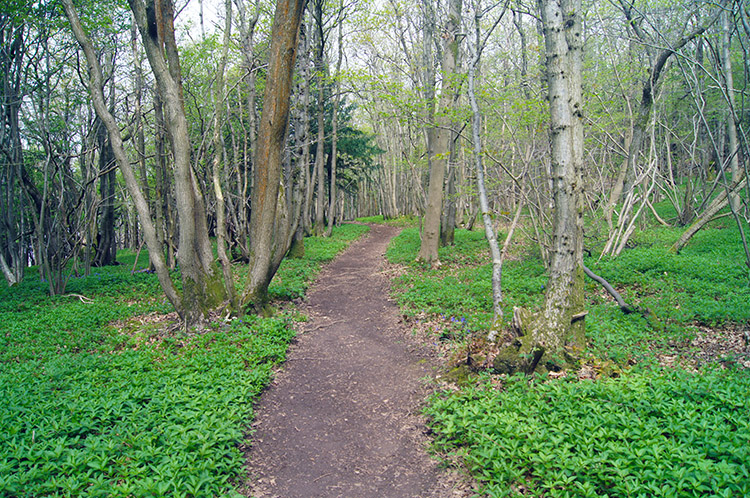 Into the trees I went, only just away from the seashore which got a little more distant as I gained height. The paths were easy and delightful to walk on, meandering in and out of the coastline. The lush green of Wild Garlic provided striking contrast to the grey and white barks of the trees. Clumps of Bluebells offered even more colour and thus more joy. I was loving it. The woodland section of walking took me all the way past Park Point and beyond to Arnside Point. Occasionally the path came back to the coast and when it did I got long views across Morecambe Bay to Grange Over Sands, starting point of the famous Morecambe Cross Bay walk which is led by the Queen's Guide to the Sands. 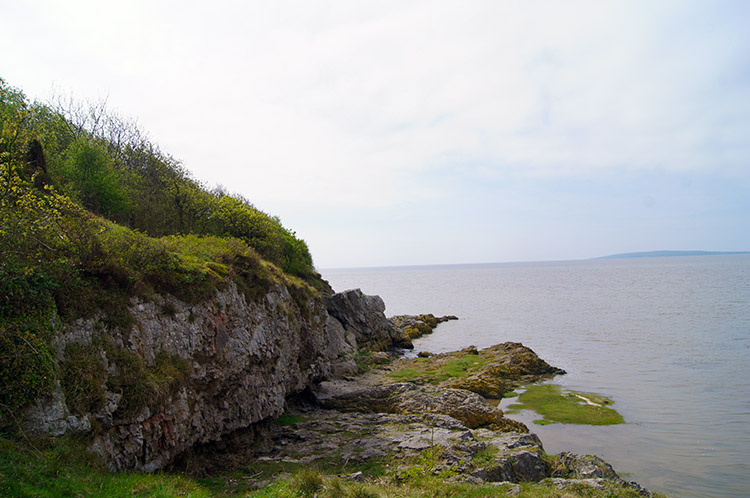 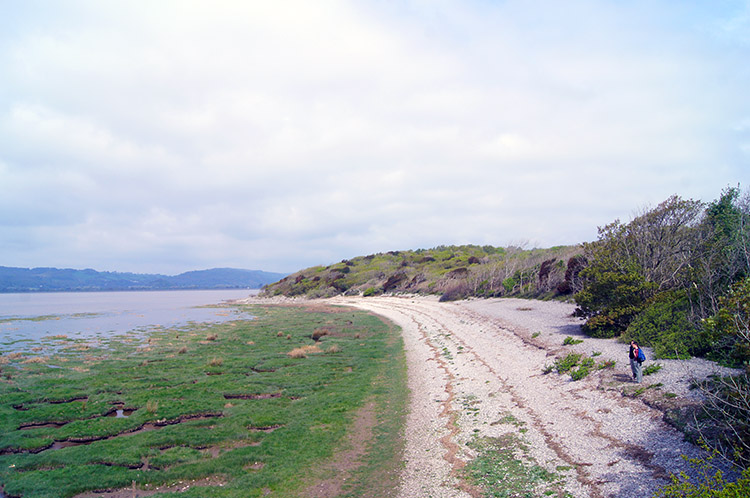 From Arnside Point I followed a short stretch of more woodland to reach Leighton Moss Nature Reserve. Here I met a few people and spoke with one couple from the London area who told me they were thoroughly enjoying their short holiday in Arnside and Silverdale. I left them as they relaxed on a bench overlooking the nature reserve and made my way on a path fringing the green wetland so coveted by shore birds. They were a few Oyster Catchers playing out their courtship as walked across the open bay. They were not bothered by my attention, I kept sufficient distance away to watch them without fright. 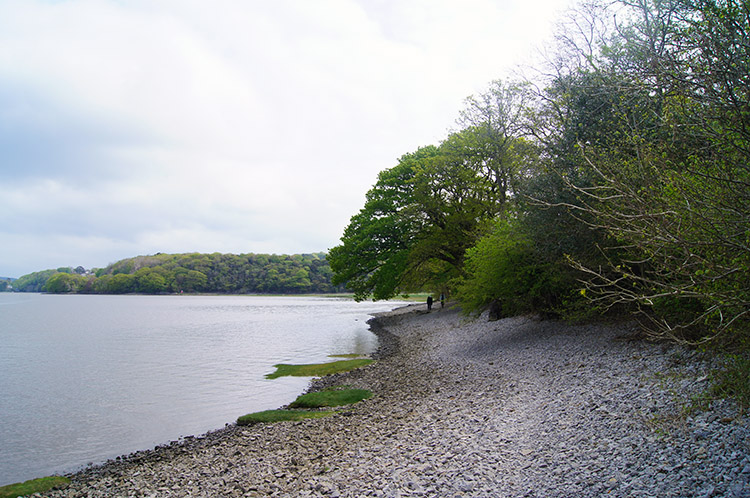 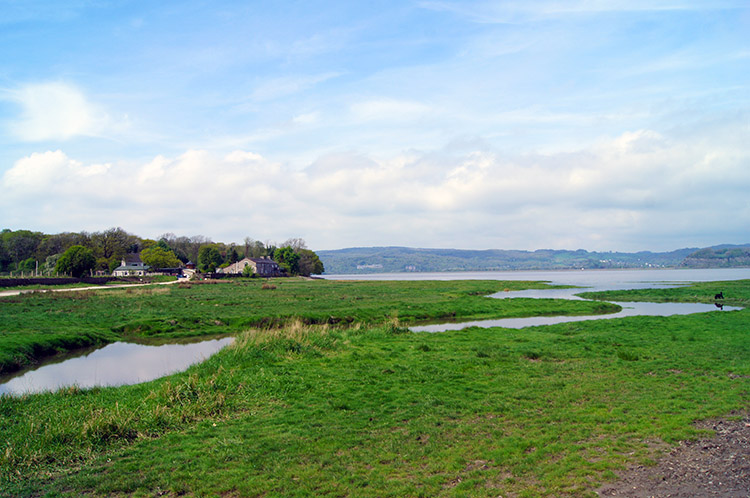 From Leighton Moss Nature Reserve I followed a mixed bag of paths, first a little more woodland, then across flower meadow besides Grubbins Wood followed by sand and shingle paths. Then I reached an estuary at New Barns which was a fun place to play. I ran over the grass and leapt over the watercourses just as I did when I was a kid. It was great and I smiled as I walked on from my playground to the point near the Lifeboat Hut which I had reached soon after the start of my walk. 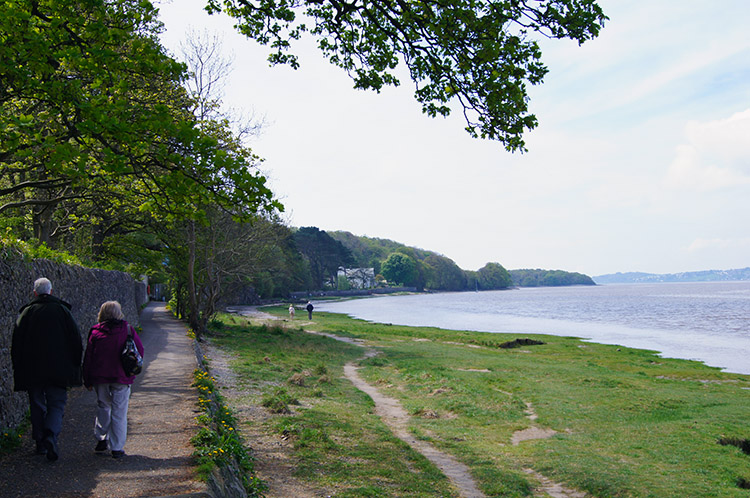 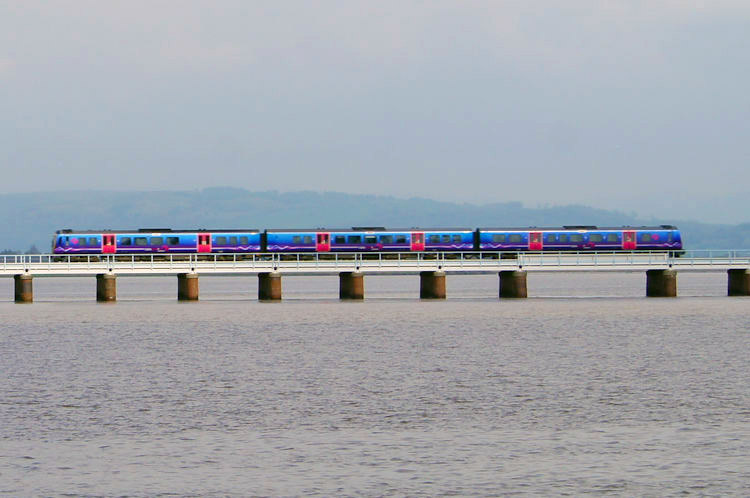 After reaching the Lifeboat Hut I walked the final 200 yards or so back to my starting point and on reaching my starting base I watched a train cross Kent Viaduct. The walk was a real delight and I could have gone around again. I really could have.