Summary: The village of Silverdale borders the Kent Estuary as it flows into the vast expanse of Morecambe Bay. This walk follows parts of the estuary as well as climbing into the exquisite deciduous woodland bordering the coastline. The mix of coast walking, paths and roads creates a walk full of diversity. To complete the full length of my walk you will need to avoid high tide but I explain this as we go while also explaining the alternative.

The Walk: Please note the coastline is tidal and that some of this walk may not be possible at high tide. Indeed there are some signs warning walkers of this. Check before attempting it - however I walked at a time of approaching or receding high tide and still the route was safe to follow. Best to pick a period of low tide to be sure though and to make your own determination. 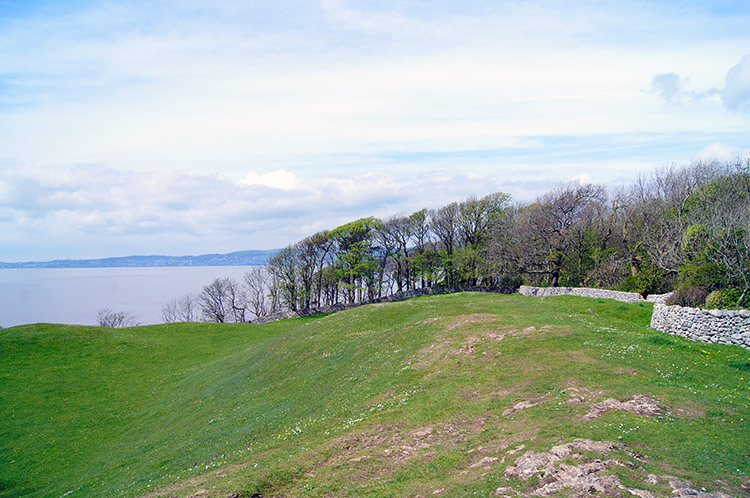 Walking across the Lots from Stankelt Road 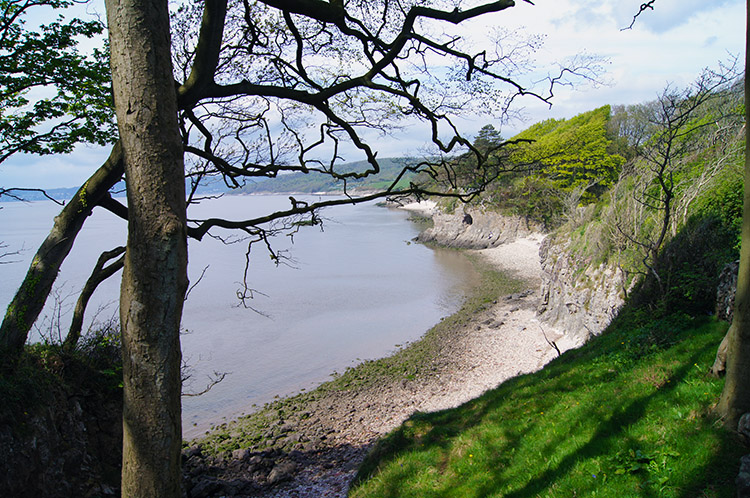 Looking down to the small sheltered cove

After parking my car down by the beach in the parking area at the end of Shore Road I walked back up to the junction of Shore Road and Stankelt Road and left the road by a gate into open fields which are denoted by a National Trust post as 'The Lots'. From this slightly elevated vantage point I could see across the Kent Estuary to Grange over Sands in the south most extremity of Cumbria. I was not crossing counties though, just the couple of fields comprising The Lots for now to the secluded cove of north Silverdale and to find a cave indicated on the map. It did not take much finding, I could see the cave clearly halfway up the white cliff sheltering the north side of the cove as I reached the end of The Lots. 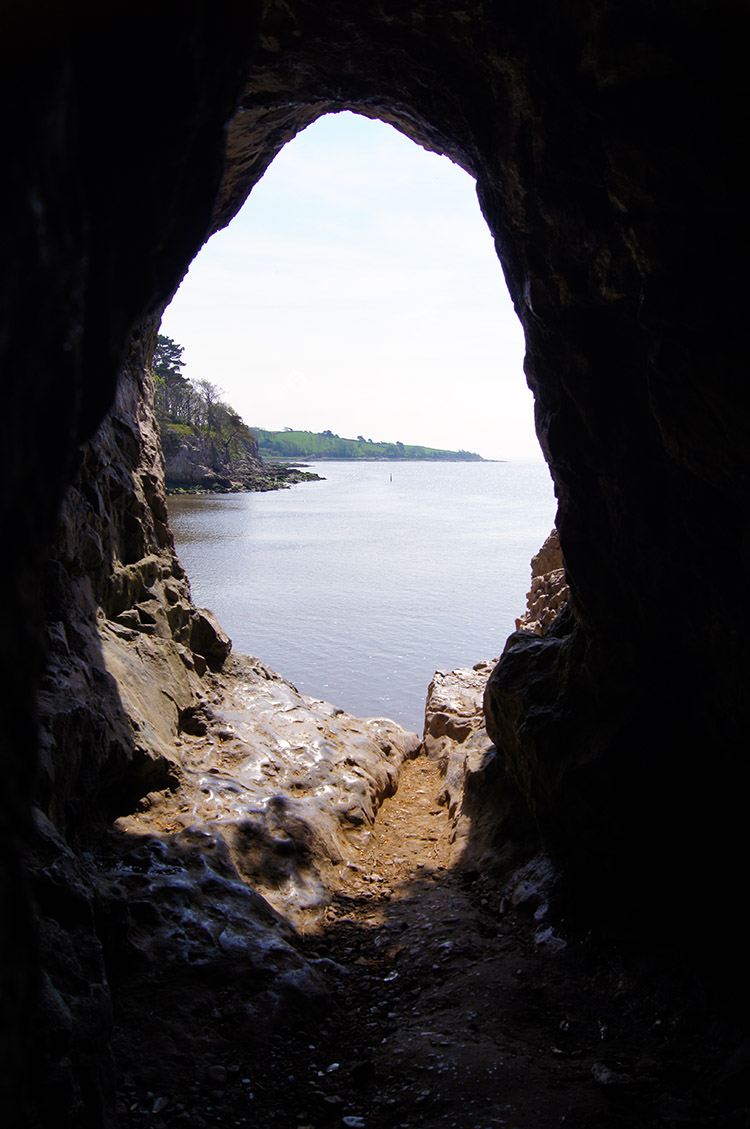 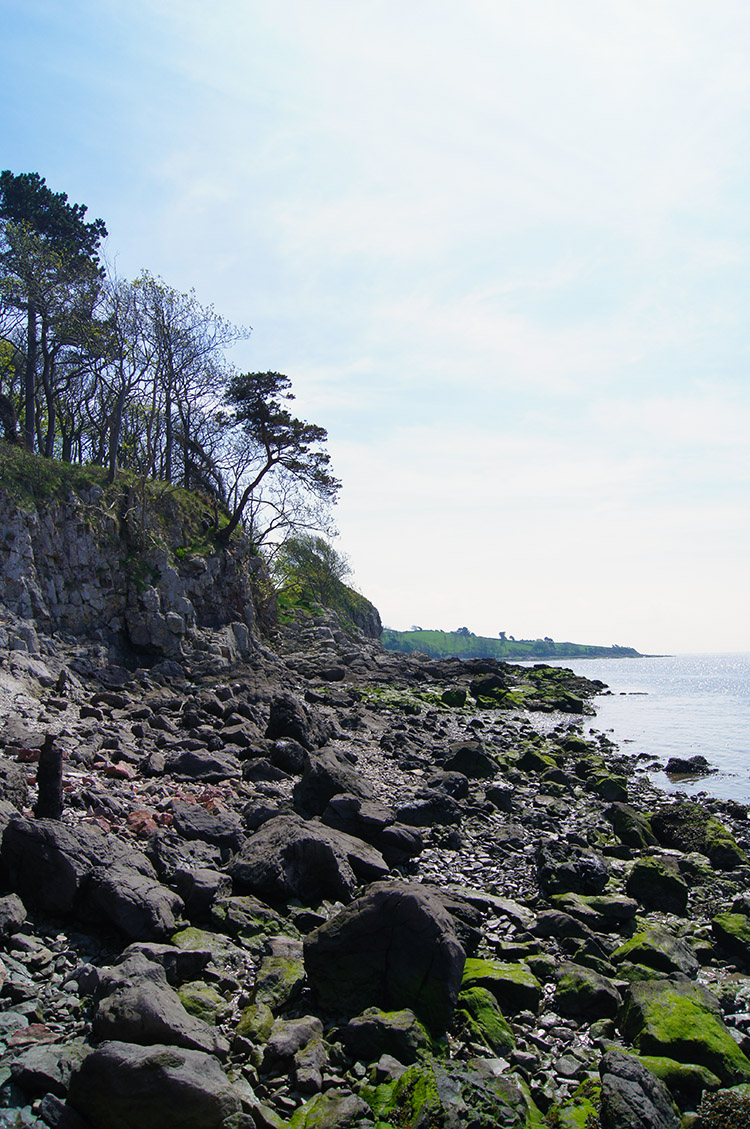 A couple were enjoying bathing themselves in the near lunchtime sunshine on the outcrop of rocks below the cliff. As I made my way past them to look inside the cave I said "Great day for relaxing and taking in the view" They agreed and wished me a good day. After returning the compliment I made the easy scramble up to the cave and entered. It was just the right height to stand up in and about 20 feet deep. From inside I enjoyed a perfectly framed picture of Know End Point and Morecambe Bay. After enjoying the cool conditions of the cave for a short while I re-emerged into the heat of the day and stayed by the side of Morecambe Bay by following the Lancashire Coastal Way south and back towards the car park at the end of Shore Road. 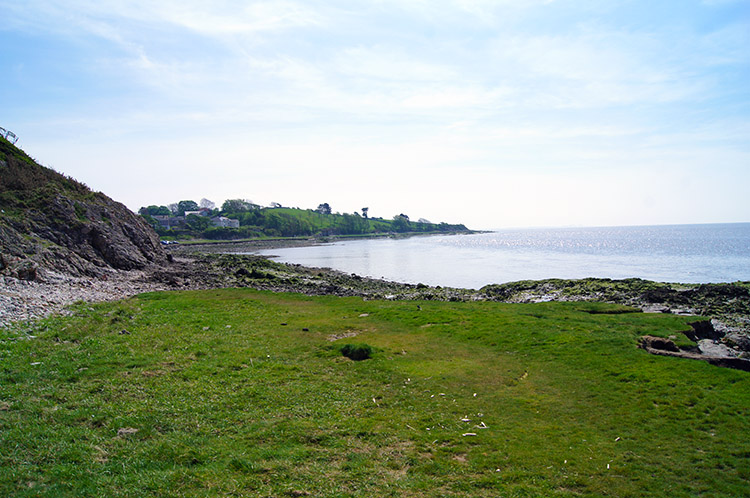 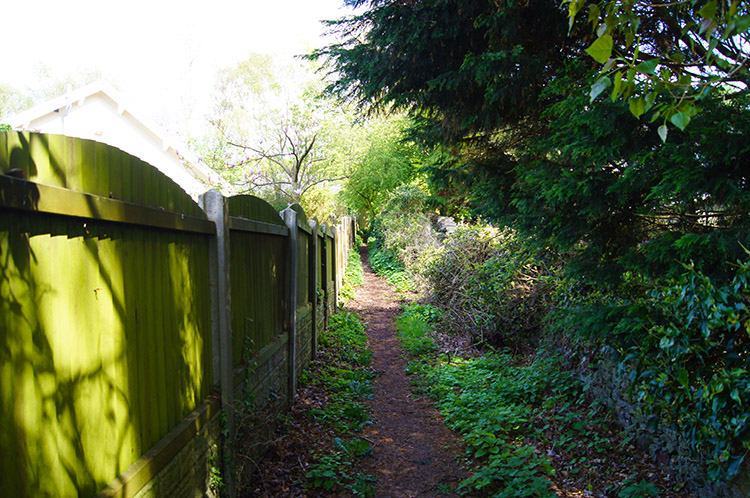 The first 400 metres of walking on the Lancashire Coastal Way was not easy. I had to scramble over rocks that were very wet and slippery and was relieved when I could leave the rocks to cross shingle and irregular patches of sand. Signs warn this section is dangerous at high tide. However, it was not high tide and with care the walk could be done. I made it more difficult because of my haste. (Note: This section can be avoided if there is high tide by crossing The Lots again - it would be a shame to do so but necessary). After reaching Shore Road and passing my parked car I walked up Shore Road and accesses a back of houses path to the right which cut through south and east to reach Lindeth Road. 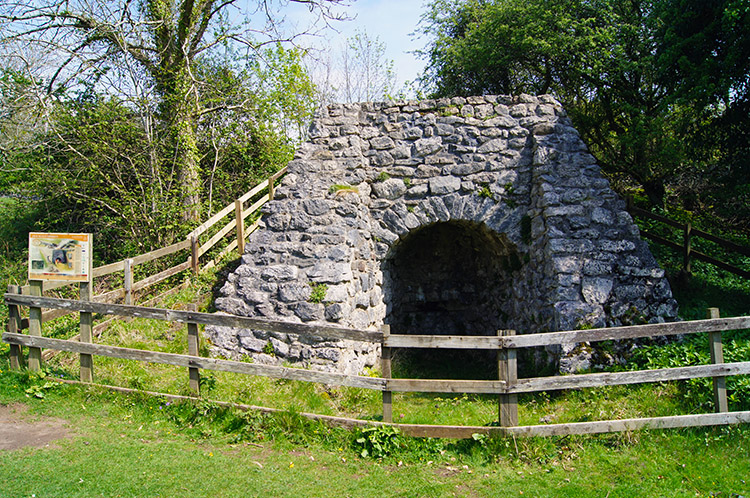 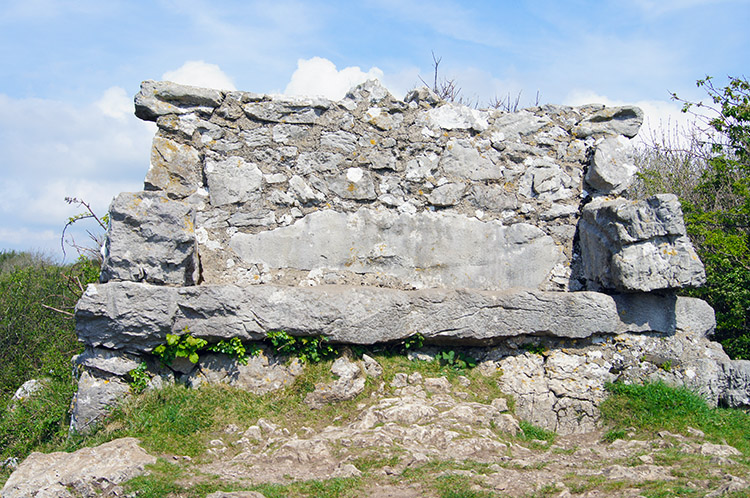 I ambled along Lindeth Road and while doing so passed courtesies with householders tending their gardens. A warm and sunny day in Spring often brings people out of their homes and into their gardens; as it did here. Wide and leafy Lindeth Road continued to be a pleasant walk as I passed the junction with Woodwell Lane before it took a turn left at which point I left it by carrying on walking down a lane past Lindeth Lodge Farm and Lindeth Tower on my way to Jack Scout. Some way along the lane I reached a gate where a National Trust sign indicated I had reached Jack Scout. I left the road and followed a lovely path across short green coastal grass and past a fine example of a restored Lime Kiln. Then I passed a cracking bench made from local stone. I looked out from near the structure confirming the seat was a perfect spot for taking in the views. 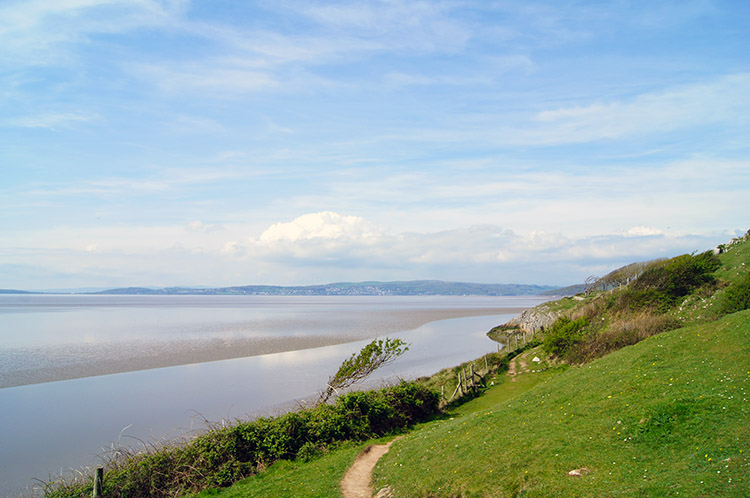 The view to Morecambe Bay from Jack Scout 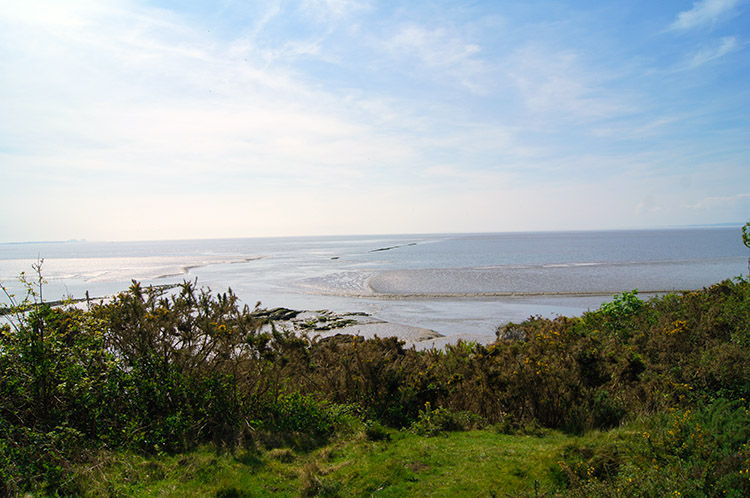 Jack Scout promontory is owned by the National Trust and gives a superb view of the Morecambe Bay area in particular and by looking north to the south Lakeland hills and fells. It is also a good point at which to watch the Arnside Tidal Bore, a wall of water which signifies the advancing tide rushing up the channel and into the Kent Estuary. I did not exactly view the bore from Jack Scout but I could clearly see rushing water spewing along the Kent channel. I was also destined to see a similar sight soon on this walk. From Jack Scout I headed to Jenny Brown's Point, a line of shingle-clad boulders which were to be part of a House of Commons approved scheme to reclaim Silverdale Sands. In their wisdom the Lord's did not agree and the scheme was abandoned but the first set of man-made protective boulders still remain in place and the sanctuary they provide seemed to attract plenty of coastal dwelling birds when I looked out over the scene. 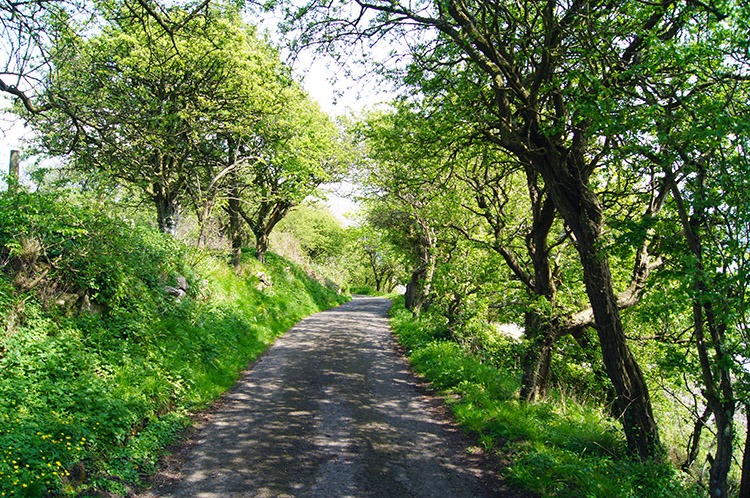 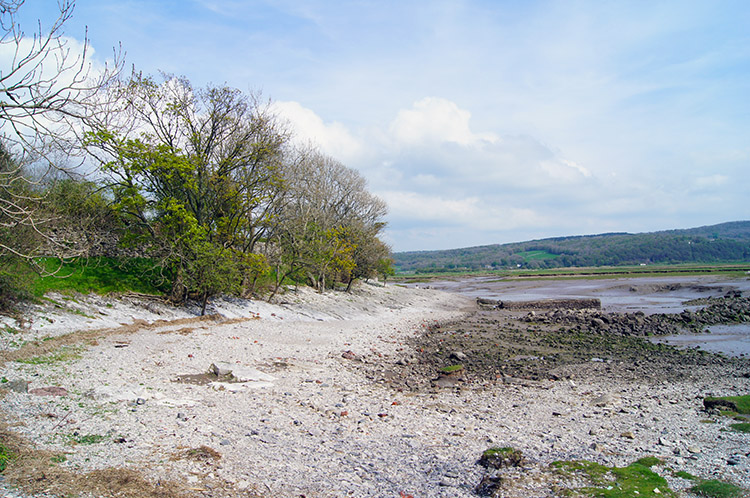 Brown's Houses marks the end of the road

After leaving Jenny Brown's Point I walked from the National Trust site and back to the leafy shaded metalled road leading south and east around the coastline to Brown's Houses. At the houses the road abruptly ended and at this point I was forced to walk off the track and around the house wall by clearly marked No Entry signs. Fair enough but I thought there would be a sign indicating the way around. After all I was on the Lancashire Coastal Way. despite this there was no indication of which way to go around the private dwelling and only by looking was it clear I would have to clamber down collapsed concrete ramps to the shore. I clambered around and then climbed back up the bank when beyond the houses and the land they occupied - note it says Brown's Houses but as far as I could see there is only one. 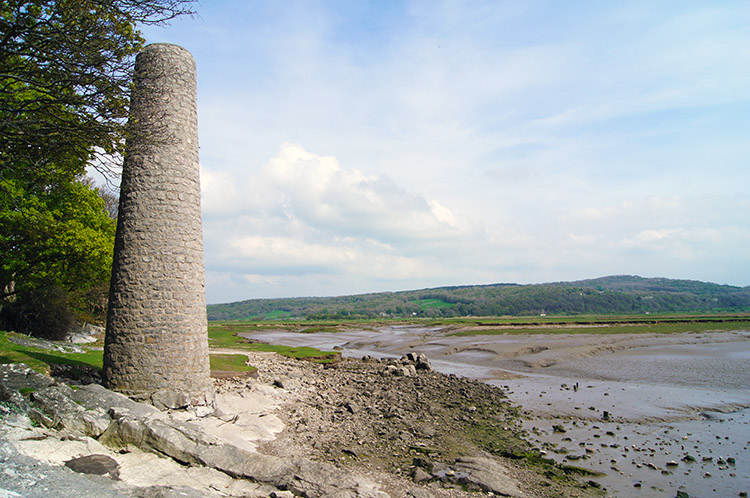 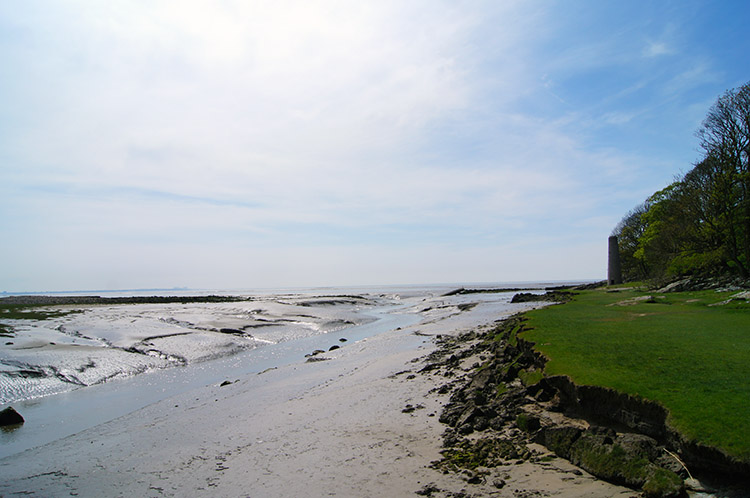 After Brown's Houses I followed the coast past an old Lime Kiln chimney near the expanse of Warton Sands and it was here I saw my second gushing watercourse as water spewed quickly from appropriately named Quicksand Pool into the bay. I stayed well clear of the quicksand. From Warton Sands follow the coastline to a crossroads of paths. This walk takes the left hand fork at the crossroads and though Heald Brow woodland to follow a path beside fields and behind houses to Scout Wood and back into Silverdale village. Its a tough climb of 50 metres in a short space of time from the crossroad of paths though so take a rest and then a deep breath before climbing through the woods and following the paths back into Silverdale. 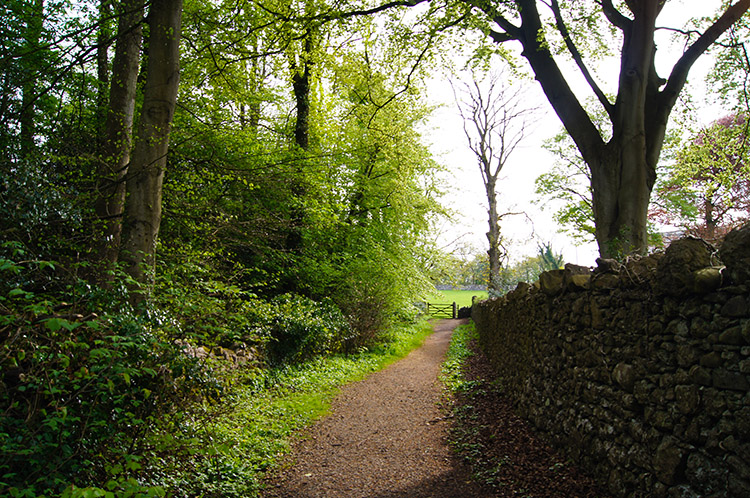 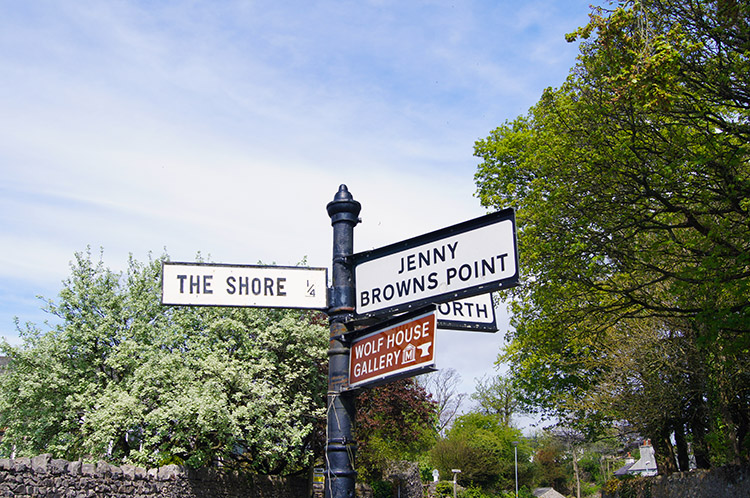 Signpost on the junction of Shore Road & Stankelt Road

Please note I did this walk as part two of a longer full day walking in the the Silverdale and Warton area. Therefore this walk can be linked to the Warton Crag and Leighton Moss Nature Reserve walk to make a full day out - see the longer walk here.