Summary: The Roman road over the Bowland Fells via Croasdale is one of the most spectacular in the country and this walk includes a three mile high level stretch of it. Also included in this airy circular walk is a climb to Wisket Hill and Dunsop Head which provides excellent views to the south and west before descending into Whitendale. Then there follows an excellent episode of the walk following Whitendale River almost to its source before climbing to Hard Hill Top from where the Roman road is joined. The remaining journey on a falling gradient is thoroughly enjoyable.

The Walk: I was pleased when Jez decided to join me for this walk exploring the fells of the Forest of Bowland. It was only my second walk in the prestigious Lancashire forest which had until recent times being the exclusive domain of titled landowners who satiated the shooting fraternity. It was a first for Jez and as we drove over to the walk from Harrogate he commented on how he was looking forward to seeing this part of rural Lancashire for the first time. After parking up beside some cottages for hire at Laythams on Back Road near Slaidburn we set off walking in brilliant morning sunshine. This was going to be good. 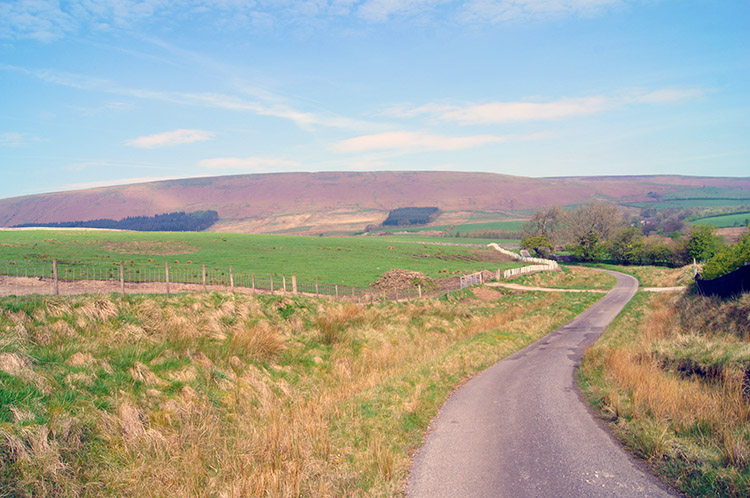 The track to Burnside Cottage 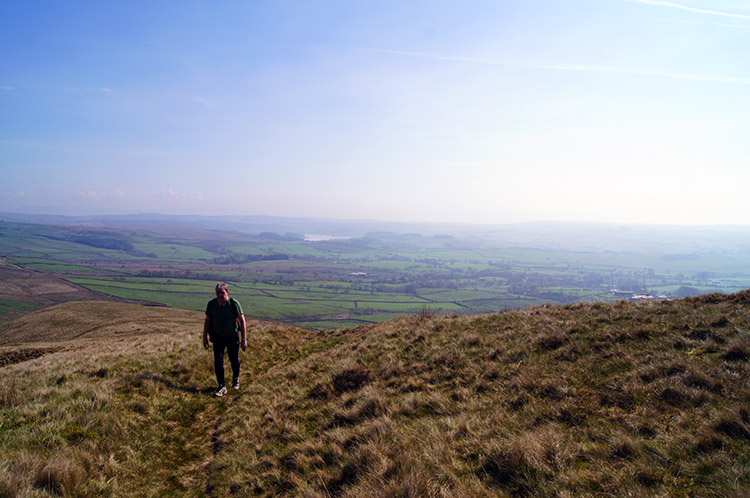 After ambling along Back Lane to the proper start of the walk at the start of the access road to Burnside Cottage we began our day out on the fells of the Forest of Bowland. The metalled track led a half mile to the cottage. We both noted how the gates leading on the lane to the property were solar power operated as were a row of street like lamps in the garden of the cottage. Good job the gates were open, we did not have the password. A dog greeted us as we reached the cottage; no it did not - it warned the occupants of our approach and a lady came out into the garden to calm it. We continued on past the cottage and across one field to reach the open fells. Then the climbing began in earnest, first to Wisket Hill. We took our time walking in short bursts then pausing before climbing a little more. We are not getting any younger and anyway it was hot. We were soon sweating. The pauses for breath gave us an excuse to take in the great views which were unfolding though, particularly the view to the south and east including Stocks Reservoir and Pendle Hill. 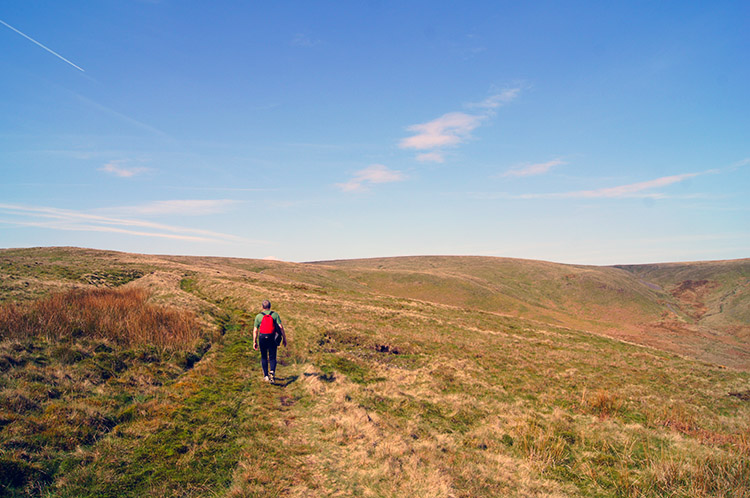 After Dunsop Head grass gives way and peat is exposed

It was a good exercise scaling Wisket Hill and when we had done so the steepest and highest unbroken climb of the day was already behind us. Over 200 metres of height had been gained in the first mile and a half. Fr4om Wisket Hill we continued to climb to Dunsop Head but now the going was dead easy, a steady climb on good a really good fell top path. It was exhilarating to walk across the moor knowing there was no more significant climbing until much later in the walk. A time to stroll, chat away and enjoy the views. We did all of that. Reaching Dunsop Head marked a change in the terrain; until reaching it we had walked on paths across fells bedecked in the best moorland grass. After Dunsop Head the green grass dispersed into random clumps and the lushness of before was replaced by large swathes of area covered in exposed peat. 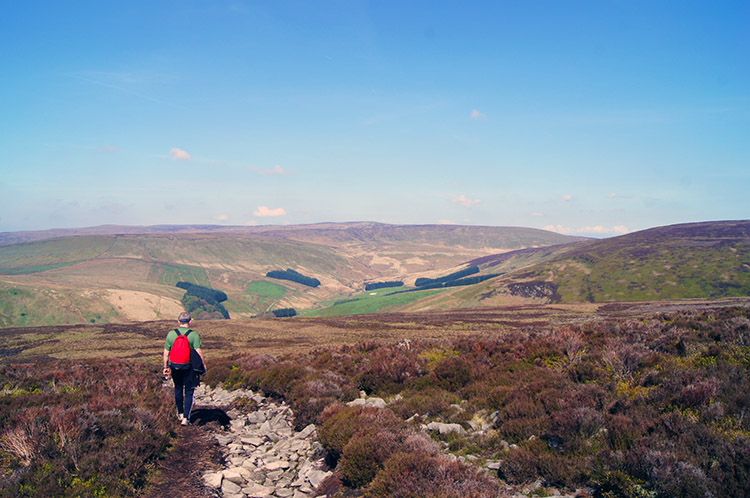 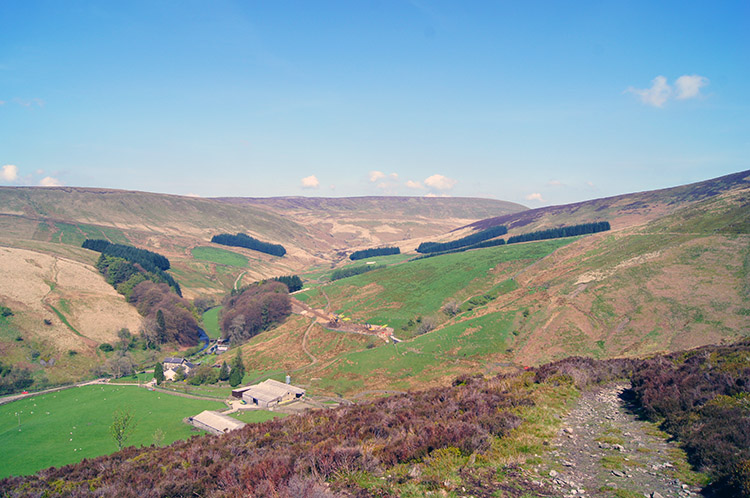 Dunsop Head also marked the point where ascent became descent though and now Jez and I strode on across the moor and downwards into Whitendale. First we walked on peat tracks and then negotiated a short section of traversing down and up through collapsed peat hags. It was never too difficult though and the route of the path remained mostly dry. As we dropped further towards Whitendale the peat path was replaced by a stone filled one. It looked to have been recently done, the stones appearing washed clean. Lower still the manufactured loose stone one ceded to a hard track, much easier to walk on. we could see the hamlet of Whitendale below us and large excavators working the fell side above the farm. For what reason? 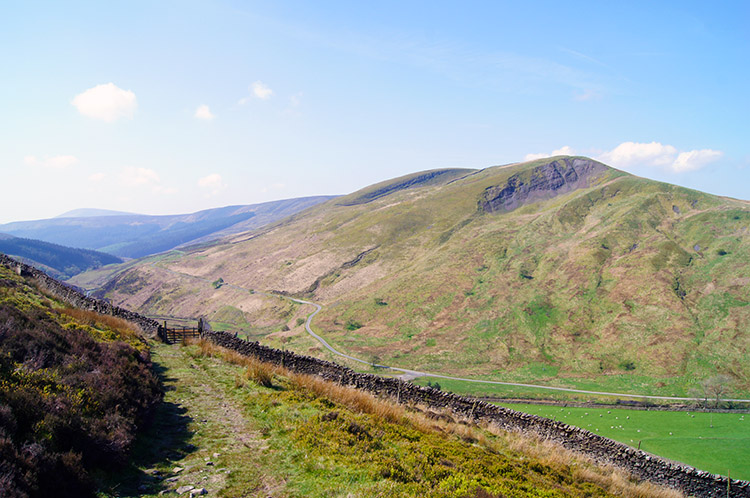 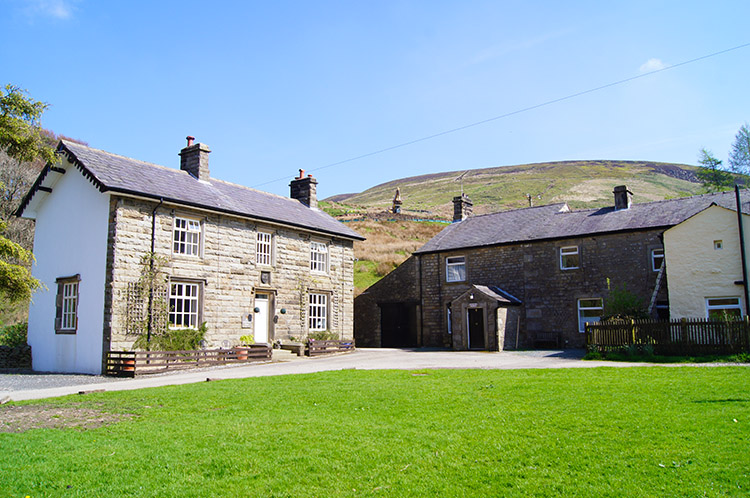 The hot spring sunshine was not established enough to create much of a heat haze, views of the near hills and fells were pixel clear. I was drawn to look across at an exposed crag on a hill across the dale, the hill being Middle Knoll and the exposed rock forming Blue Scar. It is said there are not so many exposed crags or rock outcrops in the Forest of Bowland so I was happy to find out. It made for a nice contrast to what was already beautiful local scenery. Jez and I descended into Whitendale and passed through the hamlet where a few workers were tending the heavy machinery. I still wondered what they were doing. We would find out as we climbed and followed Whitendale River upstream. 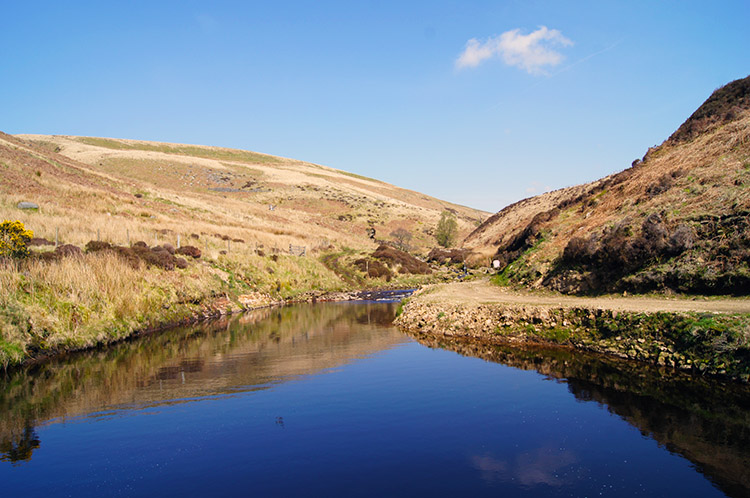 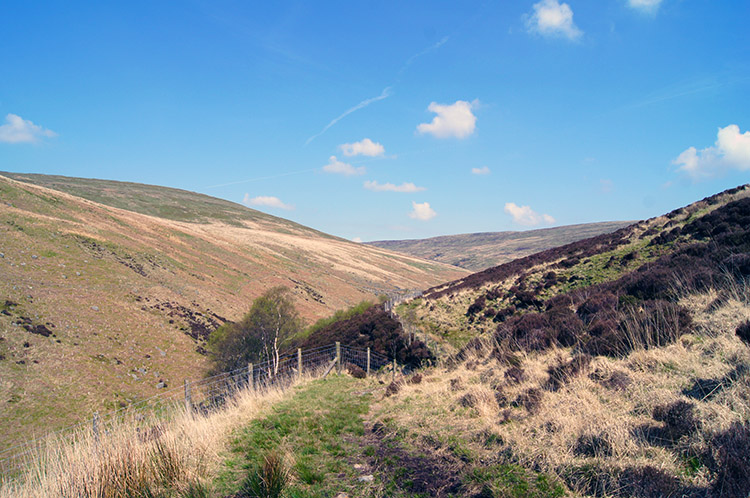 Following the path above Whitendale River

Soon after beginning the climb through Whitendale we came to a section of field marked off and within it were stacked 300mm diameter Ductile Iron pipes. From my water industry background I knew them to be tyton rubber flanged and thus destined to be pressurised. By walking a little further up the track I discovered the reason for the pipes, a water intake had been formed to capture water from Whitendale River and deliver the water via the pipeline to United Utility customers. The intake had only been open a year, a sign telling me and Jez that the Right Honourable Lord Smith of Finsbury, Steve Mogford Chief Executive of United Utilities and members of the Brennand and Whitendale Focus Group had officially opened the scheme on 25th April, 2013. It is tastefully done, when the pipeline is completed it will be hardly noticeable as long as abstraction is not too detrimental to the river downstream of the intake in times of drought. We backtracked from the intake for 150 metres and climbed the fell to our original route which took us higher up the valley towards the source of Whitendale River. 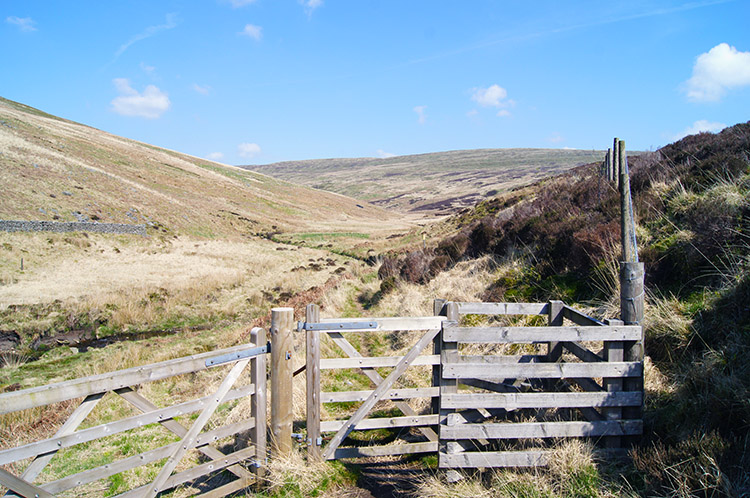 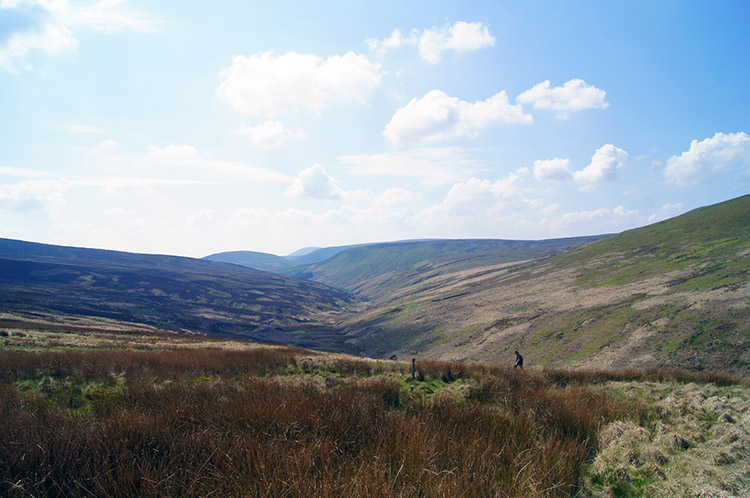 Looking back to Whitendale from Hard Hill Top

The path followed a course almost due north up the valley. For the most part we were about 30 metres above the river which gave us a good vantage point to view its course. This section of walking was most notable for we had to cross a good number of cloughs. For the uninitiated a clough is a gorge or narrow ravine and the Forest of Bowland has plenty of them. We crossed Higher Stony Clough and Brim Clough and many more unnamed, each of them delivering water into Whitendale River. After walking up through Whitendale, and in the meantime stopping for lunch beside one of the babbling brooks of a clough, we climbed from the valley on our second toughest climb from near Whitendale River to Hard Hill Top. 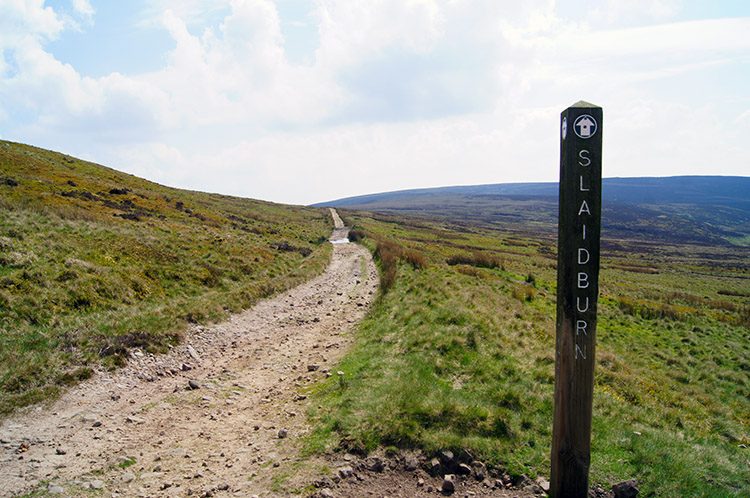 The Roman Road leading into Croasdale 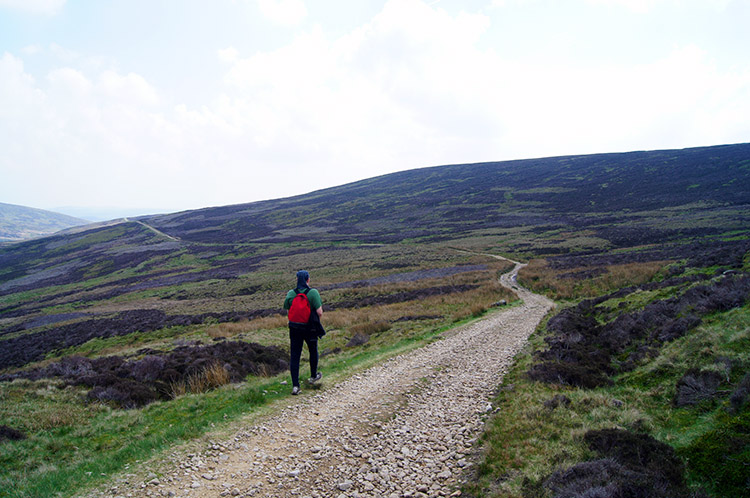 Jez walks on the trail of Roman legionnaires

Only we did not get to the top. We did not need to as the romans had set their road about 100 metres lower, thus keeping themselves sheltered from the exposed summits and ridges as they marched exploring, plundering, pillaging and settling the Britons lands. Perhaps a harsh assumption, were they not civilised traders. They were certainly great road builders and as such they have left a great legacy of roads and streets in Great Britain. Jez and I began walking on a really fine example. It is well built and even today some of the culverts the Romans built to keep the road usable are still in working order. This study by John Howard is an excellent piece of work detailing the skills the roman used in building the road. The result of their hard work made the walk along it a doddle for us. 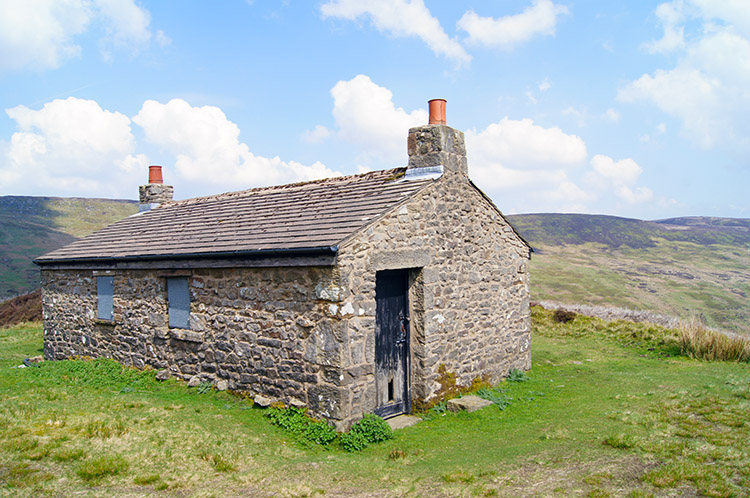 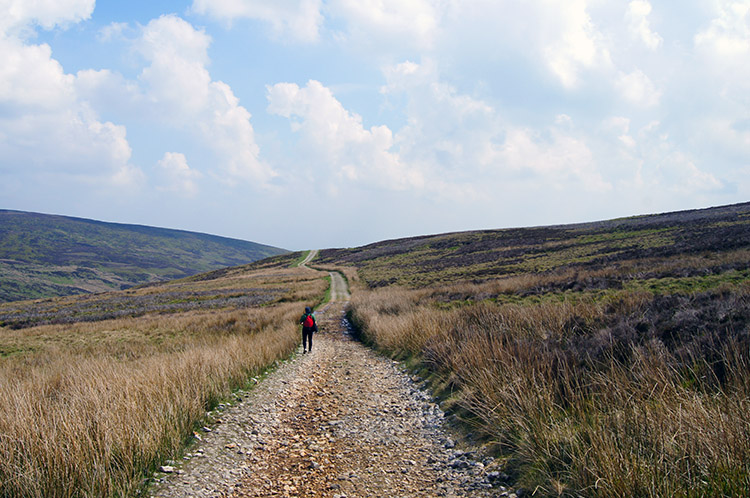 The Roman road will have been used by people ever since and in recent times most availed of by the Grouse shooters. A fine example of a shooting lodge can be found on the Baxton Fell side of the road but don't expect shelter in the storm. It is securely locked and not open for walkers business. I took a look around the building, finding no weak points of entry, and then marched across a short section of fell back to the Roman road to catch up with Jez. We continued on along the excellent track beneath our feet on a gradual descent of Croasdale. After over two miles of following the Roman road we came to New Bridge, recently refurbished or more likely totally rebuilt. Nearby were birdwatchers, two separate groups on the lookout for Hen Harriers which are becoming rare. Once prolific in the Forest of Bowland it is said none have been seen in recent years despite hard efforts by United Utilities. The birdwatchers had not spotted one. 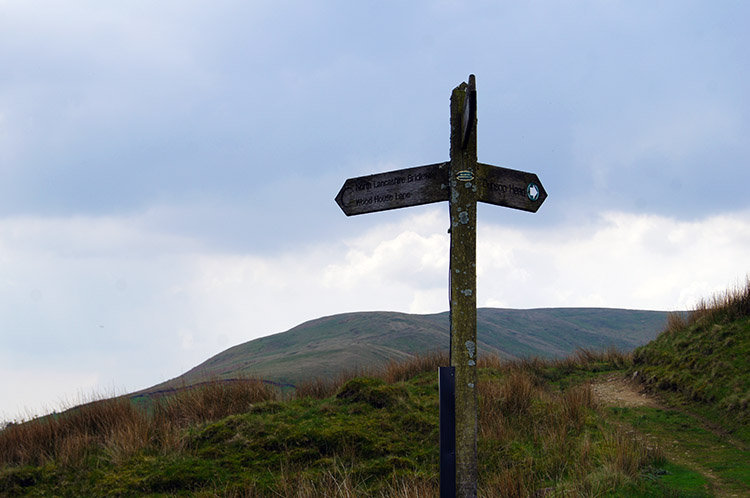 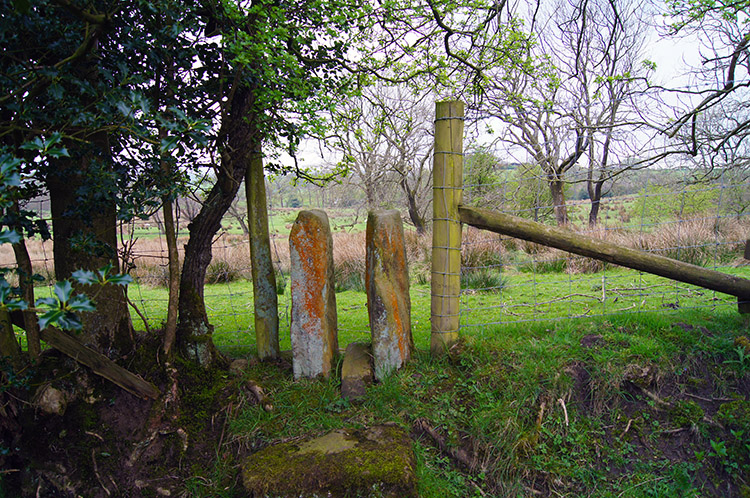 Jez and I came to the end of our lovely three mile stretch of walking on the Roman Road and after rounding Low Fell we left the moor near Hind Slack Top. The remainder of our walk was a walk over a series of fields and past three farms. Higher wood House was first and some barns there looked in need of some attention. Dunsop Farm and Proctor's Farm completed the trio and from the third and final farm we followed a track marked on the route I had downloaded but a route no more - some securely closed solar powered gates explained that all too clearly. So, for your comfort I have re-routed the end of the walk from Proctor's Farm and the download GPS files to follow the official way. You won't have to follow us into folly. Not that we had any trouble, we just climbed over the gates!

The walk had been great, both Jez and I thoroughly enjoyed it. And to cap of a super walk a young Blue Tit was waiting for us when we got back to the car. Jez nudged it to fly off and it did so, making a circle as it headed upwards to a tree. During its circling flight it flew directly over me a pooed right on the middle of my forehead. Splat! It landed safely and I am sure it chuckled. They say it is lucky to be hit though and we were indeed lucky to have such great weather on a great walk.