Summary: A lovely walk from picturesque Wycoller to the hills which form part of the Lancashire/ Yorkshire border. The paths are lovely throughout and at height on Boulsworth Hill there are stunning views of the Lancashire countryside to enjoy including the spectacle of Pendle Hill and the Ribble Valley. Both Wycoller and Trawden offer opportunity for rest and for refreshment too. For Yorkshiremen like me it is the ideal reason for crossing the border to the red rose county.

The Walk: Wycoller is a delightful isolated village in Lancashire and near the Yorkshire border. It is approximately 4 miles from the town of Colne. The splendid isolation of the village is down to its geography at the edge of a valley. There is just one road to Wycoller so traffic coming in has to take the same road out. The village is full of lovely stone houses and is now prosperous which is a huge turn of fortunes as the village was virtually abandoned after the collapse of the local weaving industry in the late 1800's when the invention of power looms replaced human effort. To rub salt in the wound of Wycoller there were plans drawn up around the same time to create a reservoir by damming Wycoller Beck. Luckily the plan never materialised and since the mid 1900's the village has made a remarkable renaissance. Firstly the Friends of Wycoller were established in 1948 to manage the ruins of Wycoller Hall and to manage the upkeep of the village itself. Secondly, Lancashire County Council bought the land from the Water Board in 1973 and the village and surrounding countryside were designated a Country Park. 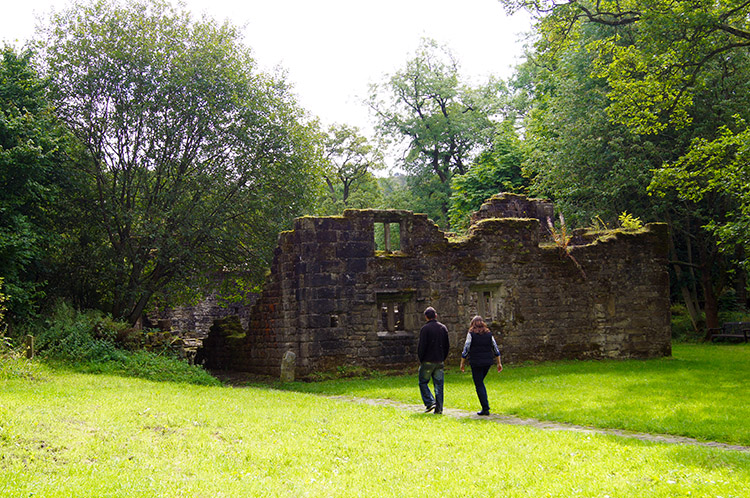 The ruins of Wycoller Hall 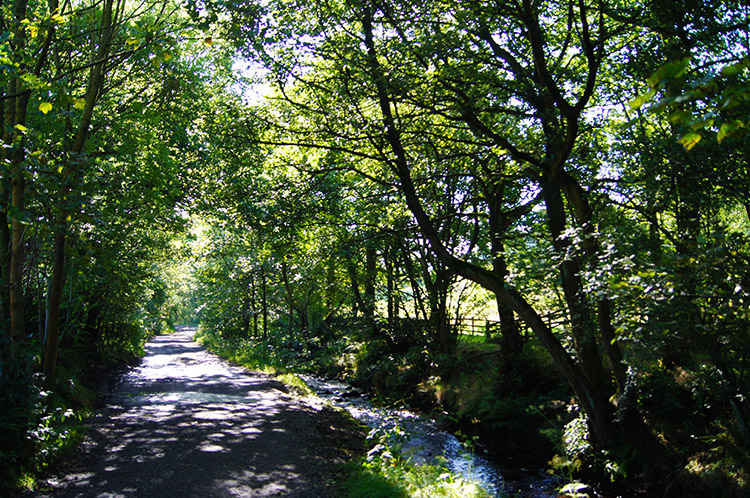 I parked up by the small double arched footbridge in the heart of the village and explored the ruins of Wycoller Hall before setting out on the walk proper. All uninhabited and forlorn now it must have been quite a place in its heyday, in a lovely rural setting. A few early-birds had just arrived and were exploring the ruins of the hall and the surrounding gardens as I walked off and out of the village to begin my walk by following the beck side lane south. It was a delightful start to the exercise as I walked on a steady and almost indiscernible climb. Sunbeams broke through the tree lined avenue and warmed the air. 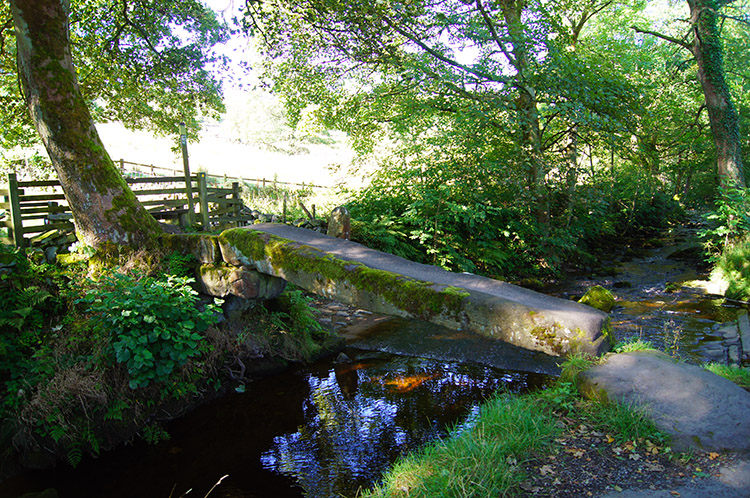 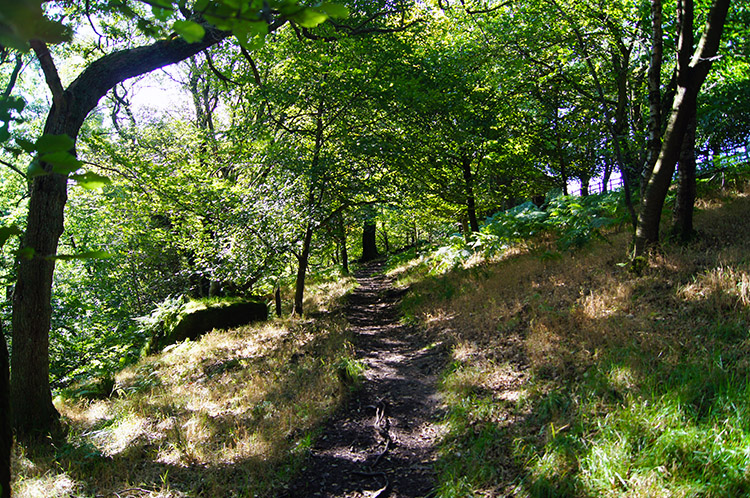 Through woodland above Turnhole Clough

I had a sense there was something unique about Wycoller as I walked from the hamlet up the lane to the moor. It had been clearly in my view at the beginning of my walk and when I reached a point where a bridge believed to be of Neolithic origin and which is listed as an ancient monument stopped me in my tracks. Clam Bridge consists of just a single long stone laid across Wycoller Beck. It is a simple structure but to me, one of beauty and in respect of history one of immense proportions. 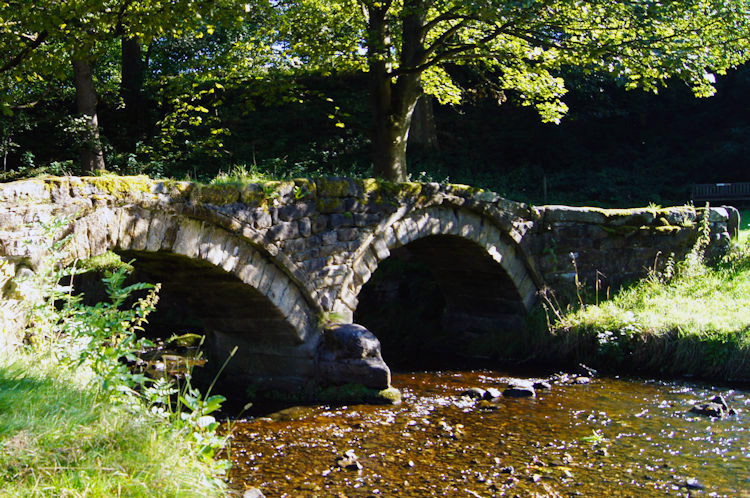 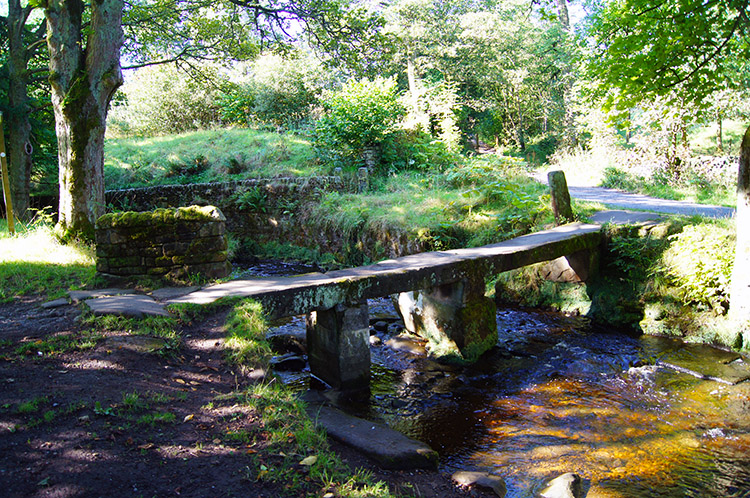 I turned my thoughts back to the beginning of the walk for Clam Bridge was the third remarkable bridge I had seen. The first two were in the village. The lovely double-arched Packhorse Bridge is the furthermost downstream. A closer inspection reveals one arch to be symmetrical and the other arch to be off-centre. Clapper Bridge is about 50 yards upstream of Packhorse Bridge, a structure of flat gritstone slabs supported by two plinths. As would be expected I crossed all three bridges. 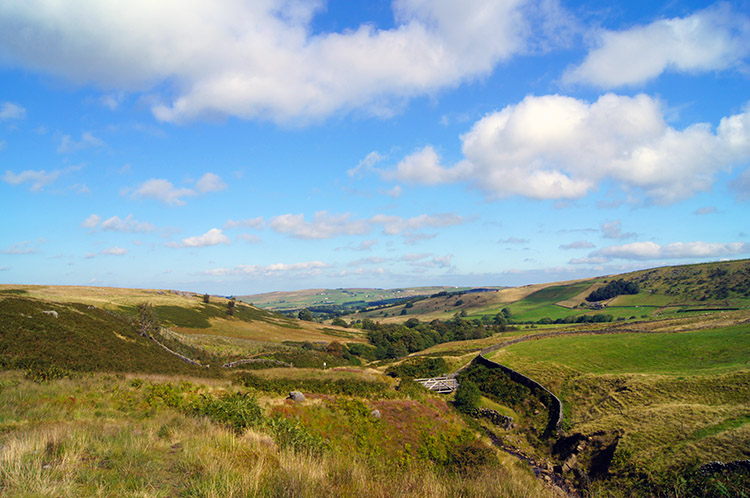 The view back down the valley to Wycoller 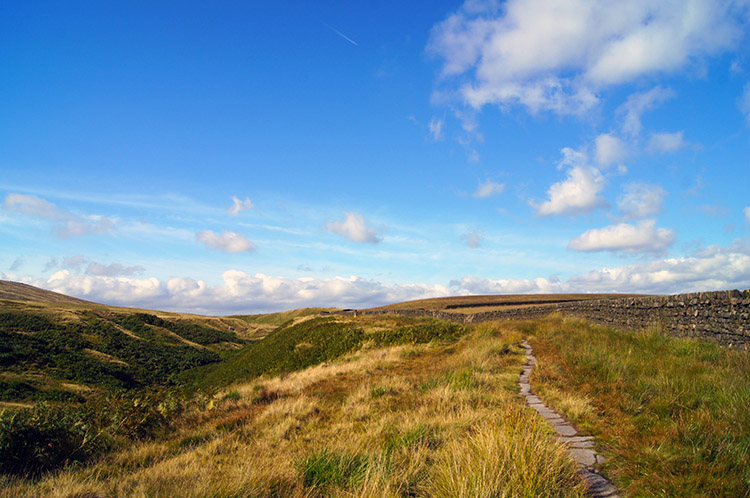 On the Bronte Way/ Pendle Way

After my digression from the walk, caused by the wonderful bridges of Wycoller I continued on my way and after leaving the tree lined lane at a junction of paths. The left hand path would have kept me on the lane and on the Bronte Way but I chose the more interesting right hand path which kept close to Turnhole Clough and after a single field led me into a lovely deciduous wood which I walked through to reach the lower reaches of the open moor. Immediately I could feel the warmth of the sun on my face as I emerged from tree shelter into full light. The heat and the light drew me upwards. On Flake Hill Moor I looked back in a north direction to see the full beauty of the Wycoller Valley. And beautiful it was. I stood for a while taking in the landscape before carrying on with the walk, climbing further before levelling out on the north side shelter of Stack Hill Moor to follow a good path along the Bronte Way and Pendle Way. 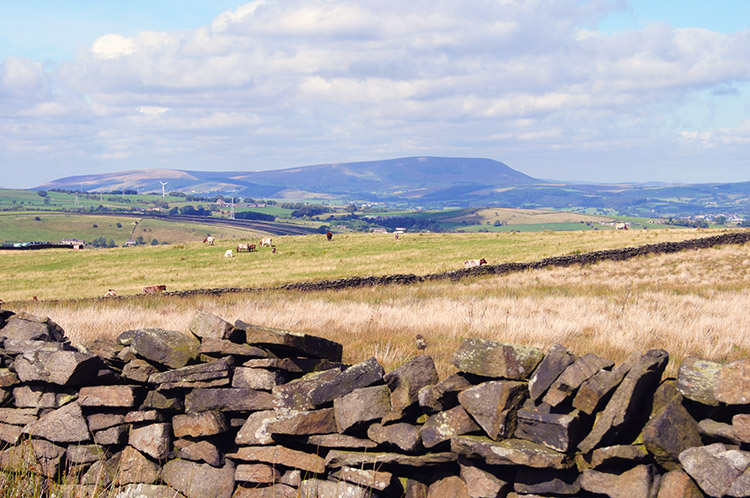 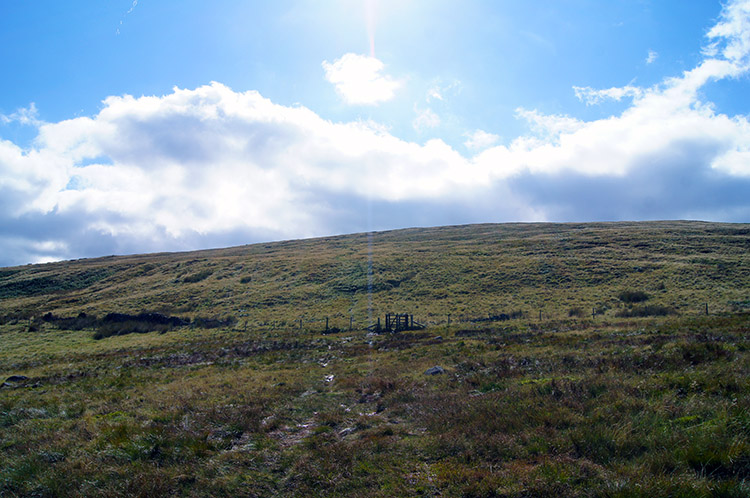 It was lovely ground to walk over, firm in most places with a few sections of stone track laid out in what would be boggy in bad conditions. But conditions were not bad at all and walking over the slabs was not necessary. Walking along the path I got my first sight of Pendle Hill, shimmering in the August sunshine to the north west. Then I came to a concrete road leading to Spoutley Lumb where a barn indicated my change of direction. From taking an undulating path south-west I turned to a south-east course and began the steep climb to Boulsworth Hill. A windy concrete road led me up at first to Trawden Reservoir, a United Utilities underground storage reservoir which captures water off the hill before treating it and gravity feeding the water to the villages below the hill. I climbed above the storage reservoir, now on a unmade path straight up the hill. It was tough going, a haul of 250 metres in just two kilometers of walking - moderate by comparison to some of my bigger mountain walks but as a one off hard enough to appreciate the effort taken. 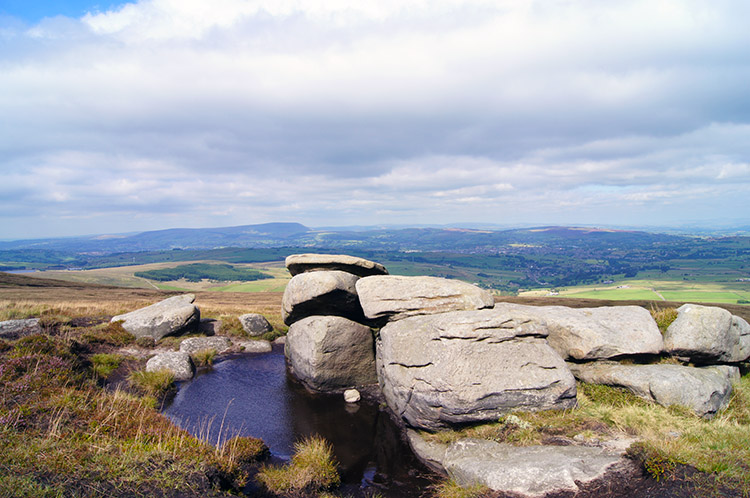 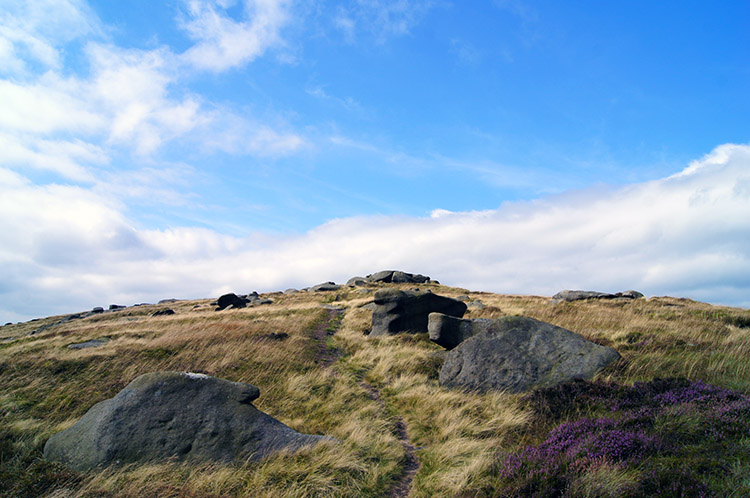 The climb, as they always are, was worth it though for once I had climbed to the top of Boulsworth Hill and took a rest at the lovely small gritstone outcrop at Little Chair Stones I could enjoy some immense views. First and foremost was the brilliant view of East Lancashire with Trawden, Colne and Nelson in prominence to the foreground with the magnificent bulk of Pendle Hill framed behind. Turning my eyes right I looked over to the vastness of the Ribble Valley stretching out to the Irish coast at Preston. I could not see the sea but I could imagine it. I banked my views, impressed them in my mind and climbed further to the highest point of the hill at Lad Law. The walk from Little Chair Stones first took me to another small outcrop called Weather Stones and then to the third small rock outcrop of Lad Law itself, clearly identified by a whitewashed trig point. 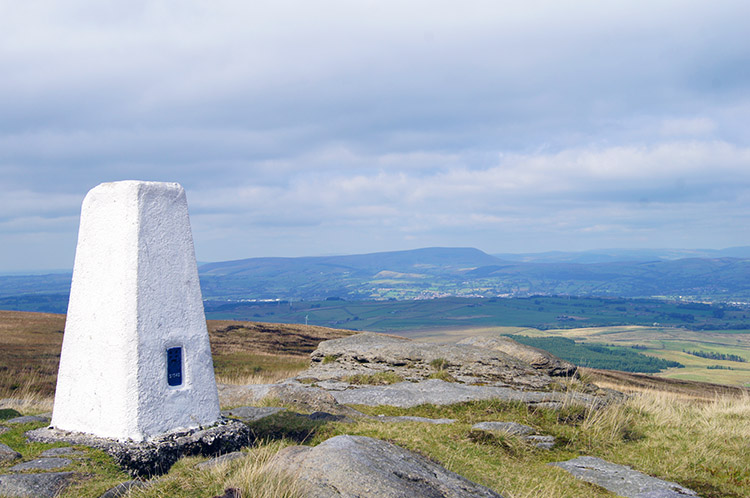 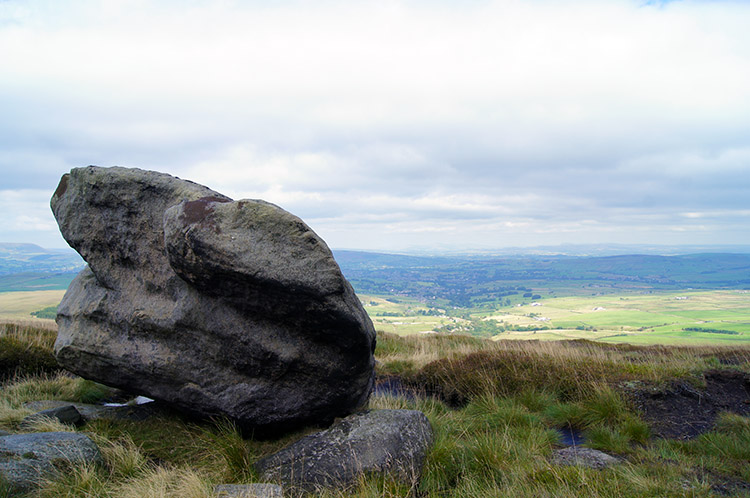 At Lad Law I relaxed, knowing I had done all the significant climbing for the day. I marvelled at those Lancashire views once more, looking every bit as good as it gets. Sprawling mill towns on the Burnley belt, neighbouring villages some near the towns and some hidden in idyllic hidden dales just like Wycoller. Pendle Hill overlooked smaller undulating hills and then there was the patchwork of small fields typical of higher England with larger fields in the lower Ribble Valley where bigger machinery could access them. Then further north the southern Yorkshire Dales which spawn the Ribble and force the young river to meander could be seen. At Lad Law there was also a contrasting view to the south. Widdop Moor and Field of the Mosses presented themselves as a wonderful vast sprawl of peat upland. It was quite an awesome sight. 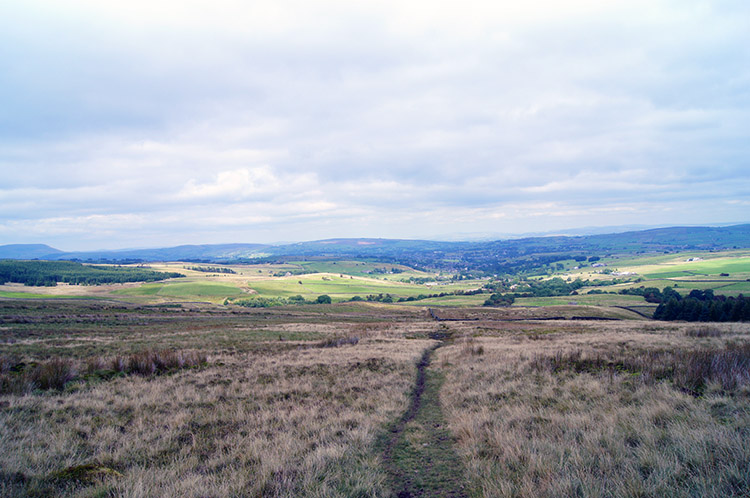 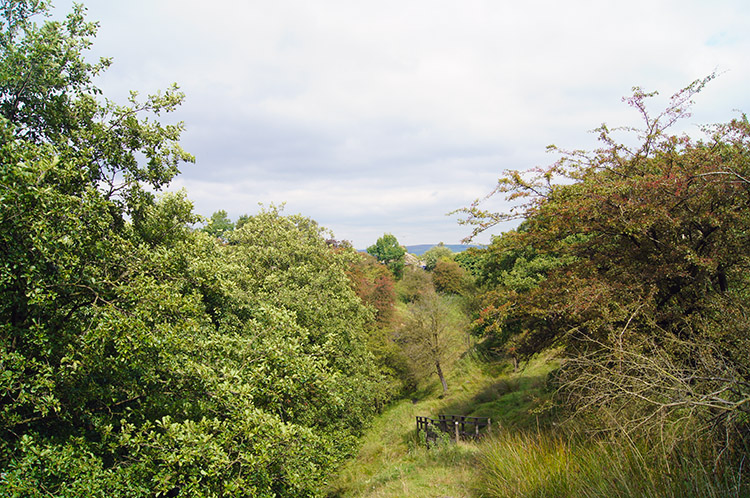 Path down to Trawden Brook

After taking in my fill of comprehensive views from Lad Law I began my descent by following a good path on Bedding Hill Moor towards the Trawden Valley. I was drawn to look at Upper Coldwell Reservoir and Lower Coldwell Reservoir below to my left. Further west I could see the east of Burnley but these views disappeared as I descended further off the moor and were gone completely by the time I reached the first discoveries of Trawden Brook at Gilford Clough. The moor was now behind me as I followed upland pasture in the direction of Hollin Hall and the village of Trawden. Near Alder Hurst End the field path ended and I followed a lane past some lovely rows of cottages to the village. 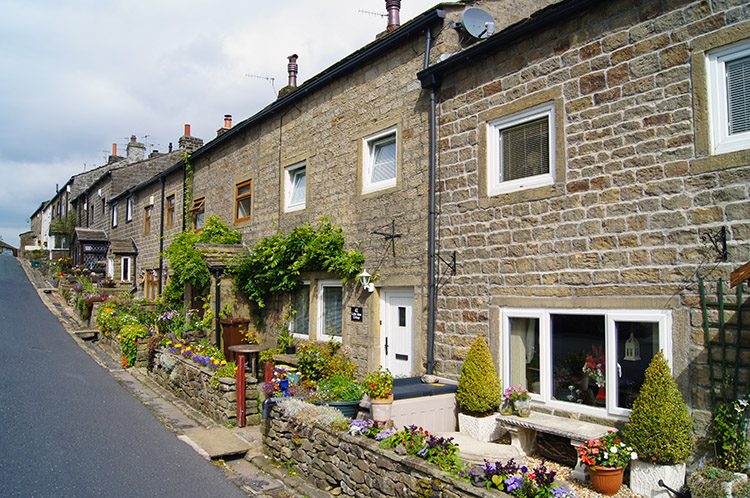 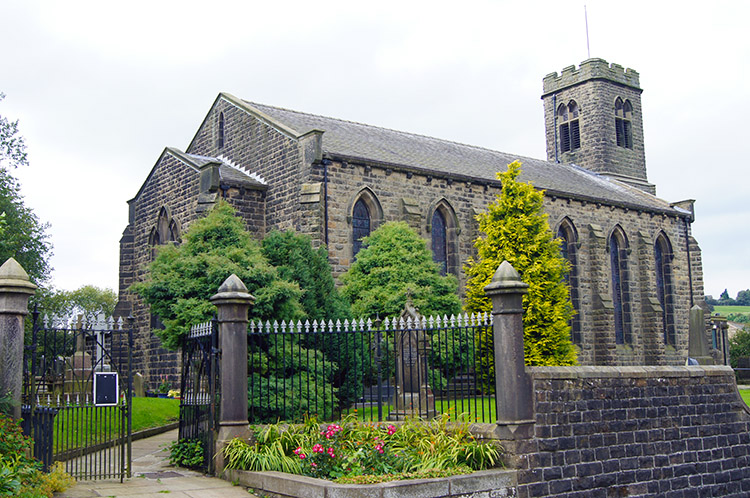 I came into Trawden at the south end of the village road just after Bottoms Farm. I followed the road north past quaint rows of stone terraces, all with affectionately managed front gardens. There is pride in this lovely village and it was a lovely walk along the road to where the road reached a crossroads besides the village church. A road sign fixed to the church wall indicated routes to Hebden Bridge and Nelson in one direction with Carry Bridge and Colne in another direction. Both routes had guarded warnings that they were unsuitable for HGV's. The roads are narrow and windy in these parts. I was going in neither direction following the village road a little further beside the B6250 until I forked right along a minor road towards Wycoller. Before leaving the road I called in at the Old Rock Cafe in the village and had a very reasonably priced cup of tea and scone. 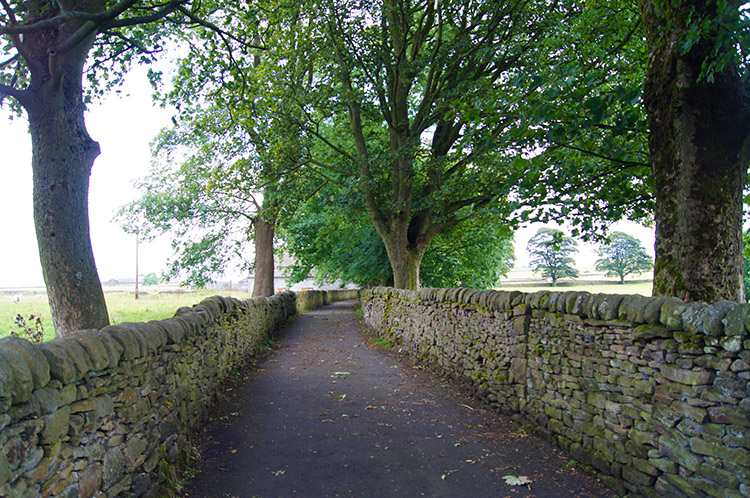 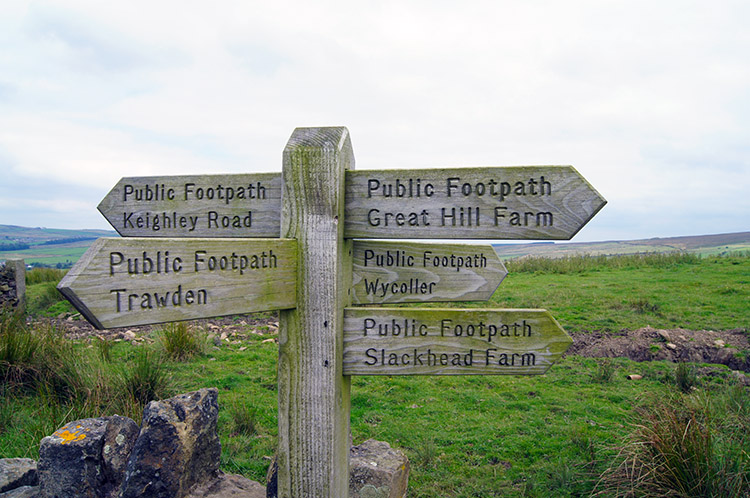 After my generous refreshment I followed the road a few yards more before turning right along a lane towards Stunstead Farm. Beyond the buildings I continued on the lane to Higher Stunstead where I was approached by a yelping terrier who was all bark and no bite. A nuisance and no more who tracked me through the immediate farm grounds but not much further. When I turned to scold the dog it whimpered only to turn and yelp each time I gave it no attention. From Stunstead I crossed a series of fields towards Bracken Hill and in the direction of Wycoller. 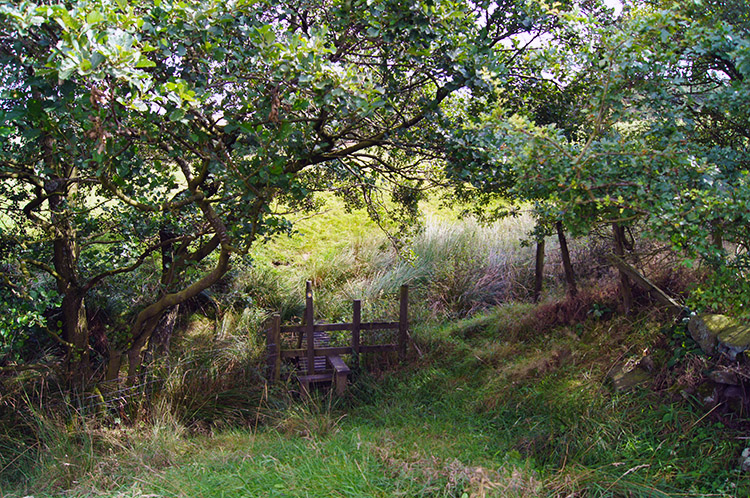 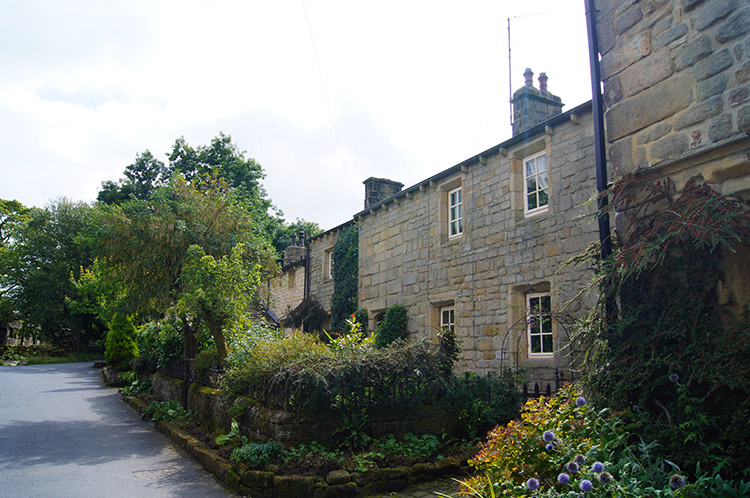 It was a little difficult seeing where the path went at Bracken Hill, a small isolated cottage. I looked all over to find it but then found a sign pointing the way which led me straight through the garden. I was a little unsure about entering the garden but I knew it was the right way when I saw a gate at the east side. After exiting the garden I followed a couple more fields which took me to the road leading back into Wycoller. Once at the road my lonely walk was over but not the walk completely. This is a popular village and lots of groups of walkers and families were now walking with me into the village. Wycoller is very popular and though it was quiet when I had arrived earlier in the day it was now a busy place. Children were playing in the and around the beck while being watched over by attentive parents. Mature groups of people were ambling in the village or in the grounds of Wycoller Hall while others were sat outside the cafe enjoying refreshments in the late summer sunshine. It was a lovely end to the walk, seeing people enjoying themselves and appreciating the environment is always pleasing.

The walk was really nice throughout, the first impression of Wycoller with the hall and the remarkable old bridges being a WOW factor. The walk up along the beck and on to the moor was lovely and once the height had been gained the views were really special. Trawden village was delightful, the cafe a joy and while the return across the fields was pretty standard it was still perfectly acceptable. And then being back in Wycoller was the perfect finale. I stayed another half hour after completing the walk and watched the world go by.