Summary: This short walk which explores some of the most scenic sites in and around the delightful market town of Kirkby Lonsdale is easy except for one place. To get down to the river from the elevated position of Ruskin's View one must negotiate the Radical Steps, a series of 86 paved steps on a steep bank. If you feel it is easier to ascend steps of a steep nature then I recommend you do this walk in other direction to which is described. The rewards for the effort are well worth it. Ruskin's View is as good as one imagines and the walk along the River Lune is gorgeous. The town of Kirkby Lonsdale is not bad either.

The Walk: After spending a few days in Sedbergh as a group my wife Lil and I were on our way home to Harrogate via the A65 while our friends Steve and Jan were returning to the Midlands via the M6. Kirkby Lonsdale was the place where we would turn out cars in opposite directions so we had decided to have a walk around the town before waving Bon Voyage. We all knew Devil's Bridge well from times we had passed by on our way to the Lake District or the Howgill Fells. We had always seen groups there, especially motor bicycle teams, chilling out, taking lunch or exploring the area of the bridge. We would check what the fuss was about. Devil's Bridge which at one time carried the Skipton to Kendal road over the River Lune dates from around 1370. It is an impressive structure consisting of three spans bridging the River Lune. 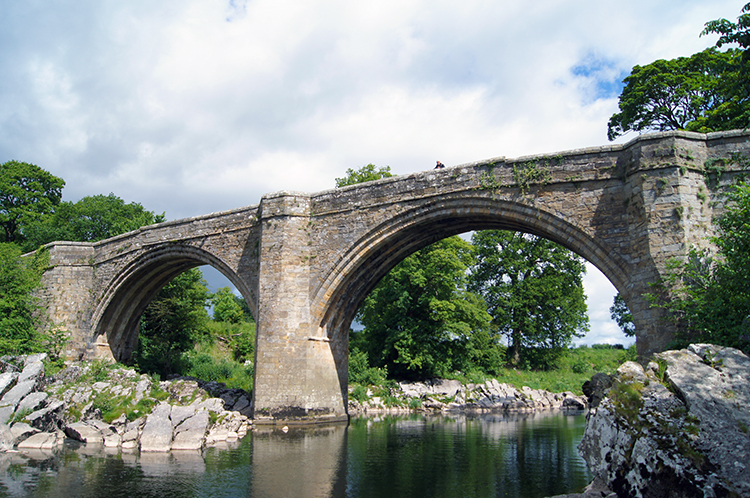 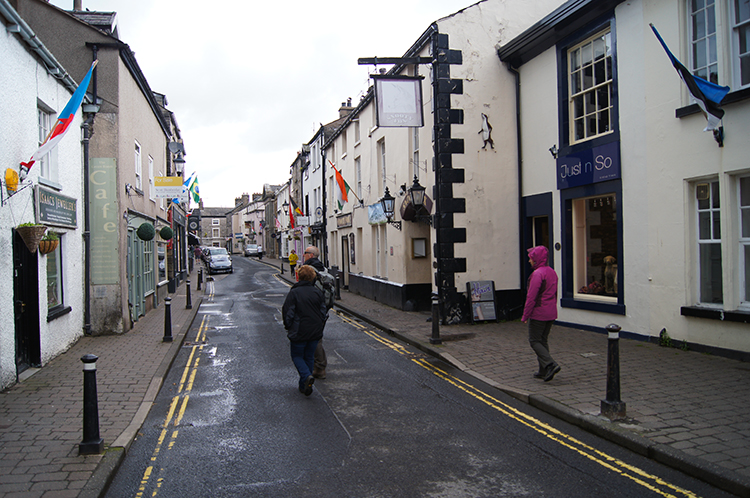 After driving from Sedbergh via the A683 we reached Devil's Bridge at around 9.00am. Cars and Motorbikes had already taken up the parking space on the bridge side of the road so we parked up in the car parking area opposite. A steady stream of traffic followed us in. Devil's Bridge is always an attraction, always busy. Though there had been overnight rain it was a fair morning. Cloud was filling the sky pretty quickly though. We set off in the sunshine and safely crossed the road to cross the bridge. A roadside cafe was already doing a good trade of teas, coffees and varieties of hot breakfast butties. As my chums peered over the bridge while others queued for their sustenance I read an information board next to Devil's Bridge. It informed me that the bridge was probably built by the monks of St Mary's Abbey, York. In common with many bridges of the same name, legend holds that the Devil appeared to an old woman, promising to build a bridge in exchange for the first soul to cross over it. When the bridge was finished, the woman threw bread over the bridge and her dog chased after it, thereby outwitting the Devil. Several large stones in the surrounding area, including the Great Stone of Fourstones, are ascribed to the Devil's purse-strings bursting open as he ferried masonry to build it. Thus the title of Devil's Bridge. What would we do without legend. After finding out the far-fetched fact we walked from the bridge and along a high walled lane to the centre of Kirkby Lonsdale. Being Sunday morning the majority of shops were still closed though I immediately pinpointed the newsagents as townsfolk strolled to and from it with regularity. 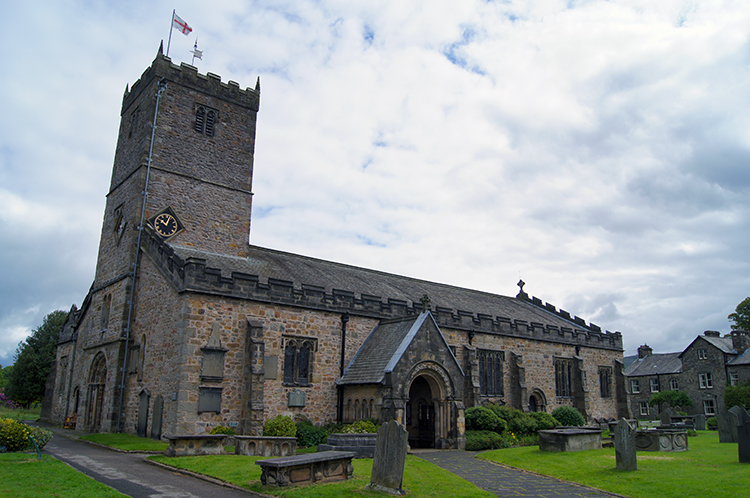 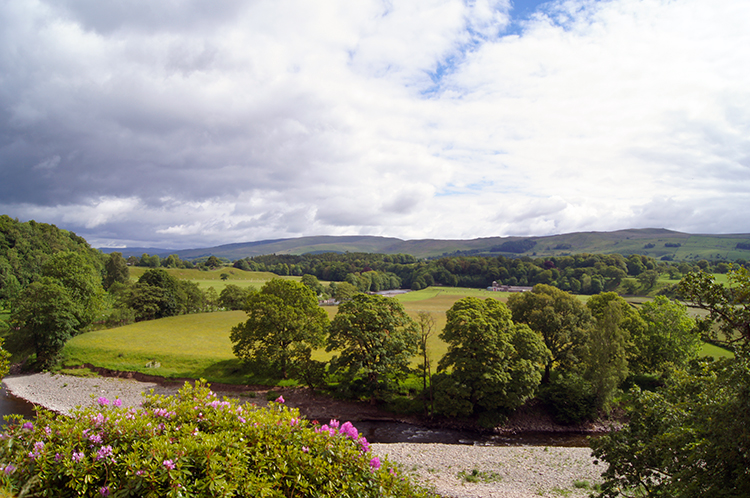 After a stuttering stop and start time in the town centre caused by Lil's reconnaissance of the shops and their wares, a visit would no doubt be made to one or two after the walk, we dragged ourselves from the streets into the grounds of St Mary's Church. It is a grand building and I noticed the church tower clock-face to be in an unusual position. Not centrally set like nearly all others this clock-face was set into the bottom left corner of the main tower. Curious. After a brief circumnavigation of the churchyard to view the building from all sides we went to find Ruskin's View. I had read about it when researching the walk and I was eager to see it for myself. Ruskin's View is of the River Lune as seen from the churchyard. It was praised by the Victorian art critic John Ruskin as "One of the loveliest views in England" and painted by J.M.W. Turner. I note he would have to move from the churchyard to see the view now as there is a great big wall in the way. We stepped from the churchyard and to a viewing area beside a footpath to enjoy it. By the way it is a cracking view. Directly below is the sweep of the River Lune as it curves from flowing south-west to south-east. Beyond the river are a series of pastoral lowland fields, mostly fringed with mature deciduous trees. In the distance are the high line of the Middleton, Barbon and Leck Fells which signify the county boundary between Lancashire and Yorkshire. Altogether the series of features come together as a sumptuous sight. 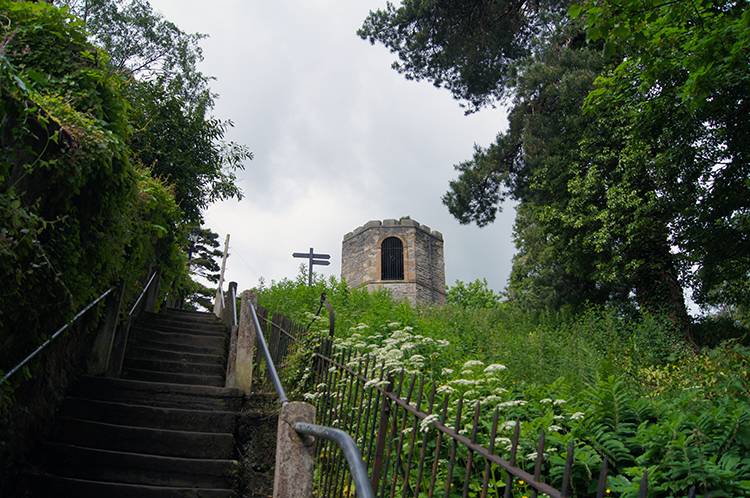 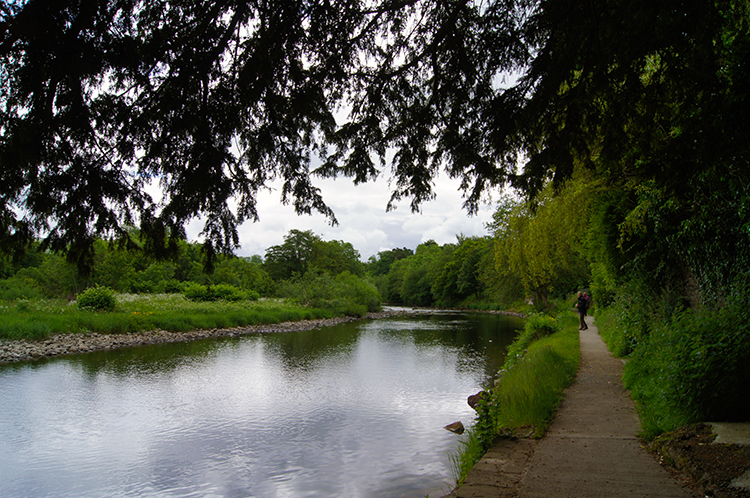 After the without a thought time peering out over Ruskin's View which drew all problems from our minds we had to drag ourselves from the place of beauty and continue the walk. Immediately our drifting minds were set back into sharp focus as we came to where we had to leave the path and descend to the riverside by a series of steps. Radical Steps are well named. The steps which were put in place in 1819 by a local man called Francis Pearson are well trodden after years of stepping up and down them and as a result are somewhat irregular. There are 86 steps to be made from top to bottom and care is needed to negotiate them safely. It was a dry summers day for us but even for us some steps were damp and slimy as the sun doesn't get a full go at drying them out. A large retaining wall to the south side of the steps sees to that. With concentration we got down safely though. (Personally I would find the steps easier to ascend but in hindsight I would still descend as I prefer to do the walk the way in which I describe here). 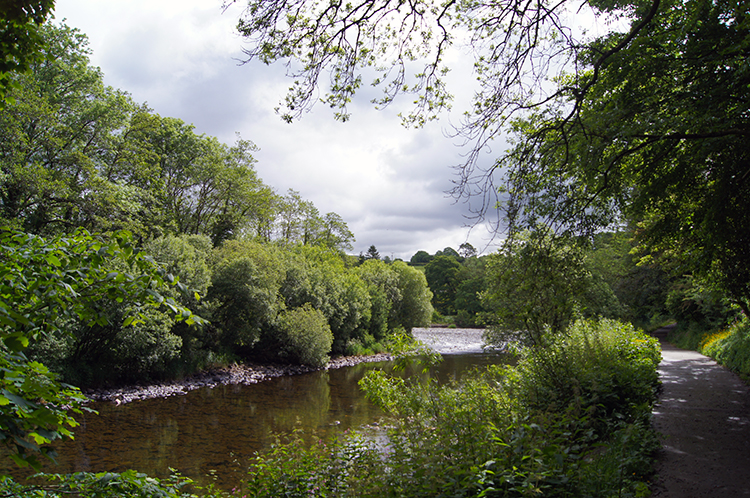 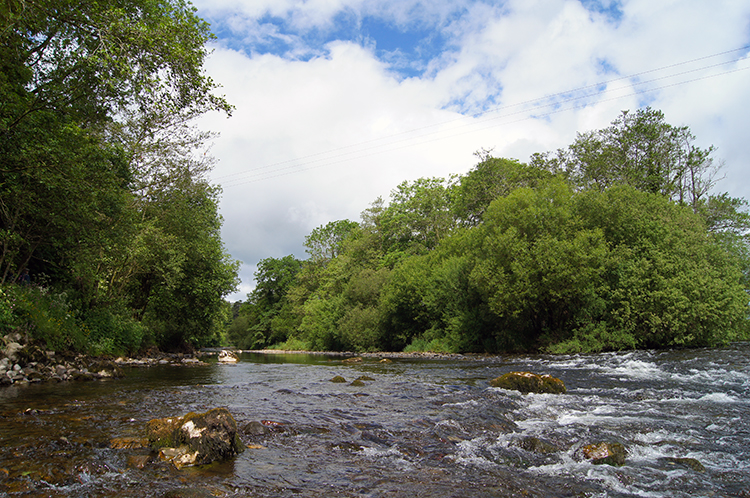 River Lune and The Island

Walking along the side watching the river flow was a treat. I always enjoy being by the river and walking along as it flows, preferably downstream to go with the flow. I enjoy rivers in all manner of their life from young upstarts at source on the mountains and fells to old codgers flowing out to sea. Best though for me is a walk beside the rivers that have filled a bit and that have sections of smooth flowing waters where flies hover and fish leap and shallowed sections where water breaks into a faster flow and creates white water. This stretch of the River Lune we were walking along back to Devil's Bridge had those essentials. It also had an island in the middle of a bend of the river which I could well have waded across to and explored if I was inclined to strip the footwear and hitch up the trousers. The island was appropriately titled 'The Island' on the Ordnance Survey map. Just before I had reached the island where the water picked up pace to flow either side of it I had watched a Cormorant serenely paddle upstream. Though I did not see the paddles. It seemed to float against the flow of water. 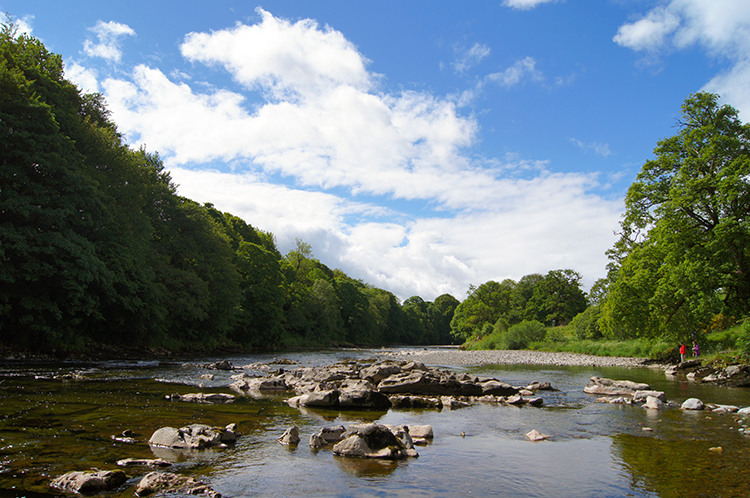 Paddling in the River Lune 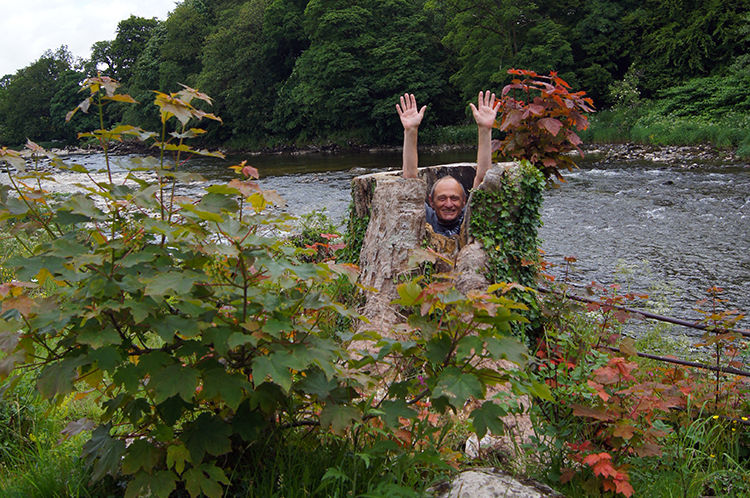 After the race of water on either side of the island, as if in competition to see which body of water could get there first, the water soon stilled again. About 100 metres downstream from the island this calm water tricked by shingle banks extending out into the Lune. A few people were out on the shingle banks and paddling in the slow moving yet shallow water. Lil went out to the waterside and picked up a few of the pebbles. She went on to plop each one into the water. She was enjoying the sound of the plops and the sight of the splashes. To join in the fun of the walk, for all was good with the day now including the return of the sunshine, I jumped into the hollowed trunk of a tree which had been cut off at about five feet from the ground. Despite the felling and the decay of wood in the hollowed inside of the tree I noticed it was regenerating. Fresh healthy leaf was sprouting from the root base by its side. I hoped it would be allowed to thrive one more. 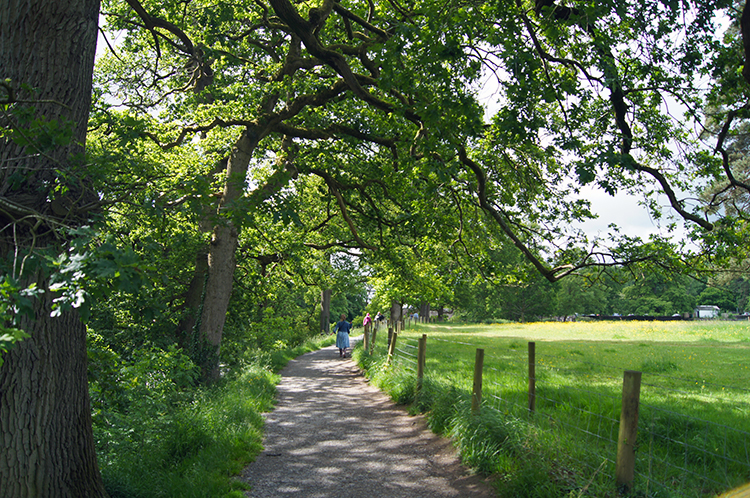 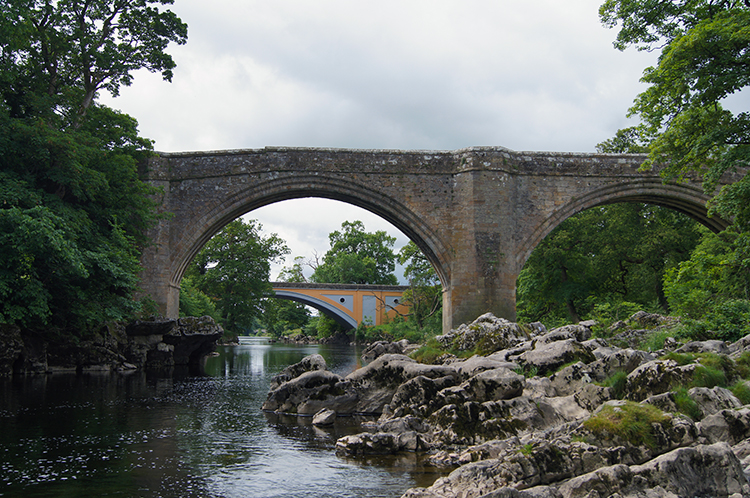 The two bridges of Kirkby Lonsdale

The path temporarily left the riverside to fringe a richly grassed field. Trees lining the path which parted us from the river provided a dappled natural parasol for us as we walked. It was another lovely part of this walk which is all lovely. Soon we came back to the locality of Devil's Bridge. While Lil, Jan and Steve followed the path back up to the bridge I scrambled down a bank to the riverside for one last time. I wanted to catch a shot of the A65 road bridge through one of the arches of Devil's Bridge. There you have it.

And then after scrambling back up the bank and following the path to cross Devil's Bridge the walk was done. One of my shorter walks, designed that way for time and convenience, but though it was short it had as many spectacles as some of my longest ones. Devil's Bridge, Kirkby lonsdale town centre with its interesting buildings and edifices, St Mary's Church, the grandeur of Ruskin's View, the challenge of Radical Steps, the lovely riverside walk, The Island, the entire package. Very special.