Summary: This is a delightful short walk which begins in the village of Cowling, near Skipton. The highlight is a walk on Earl Crag, a gritstone outcrop that affords great views to the north. These views include the southern Yorkshire Dales and also the Lancashire hills in the Forest of Bowland as well as many local features and villages. Earl Crag is also home to two man made features that dominate the local landscape. these are Wainman's Pinnacle and Lund's Tower. Before arriving at Earl Crag the walk takes me into a lovely secluded valley at Lumb where there is a quiet waterfall amidst lush surroundings. After visiting the two prominent features of Earl Crag the walk concludes with a lovely beck side ramble from the edge of Glusburn village all the way back to Cowling.

Route amendments: At the start of the walk the path leading from Nan Scar to Colne Road does not’t appear to exist anymore so walkers need to take the Pennine Way track a little further along and then come back along Colne Road. The Pennine Way path has been diverted around Lower Summer House but is clearly marked. The path off Piper Lane towards Hallan Hill also is not’t there anymore. Walkers can either take the marked footpath on the left halfway along Piper Lane or the driveway further along the road after the house that we took that brings you to the path on Earl Crag. Finally the path from Bent to Glusburn Bridge at the Glusburn Bridge end is so overgrown its impassable so we had to continue down the drive to the main road. The amendments are courtesy of Steve Horsfall who walked the route in August 2014. The attached route files are updated to show the amendments. 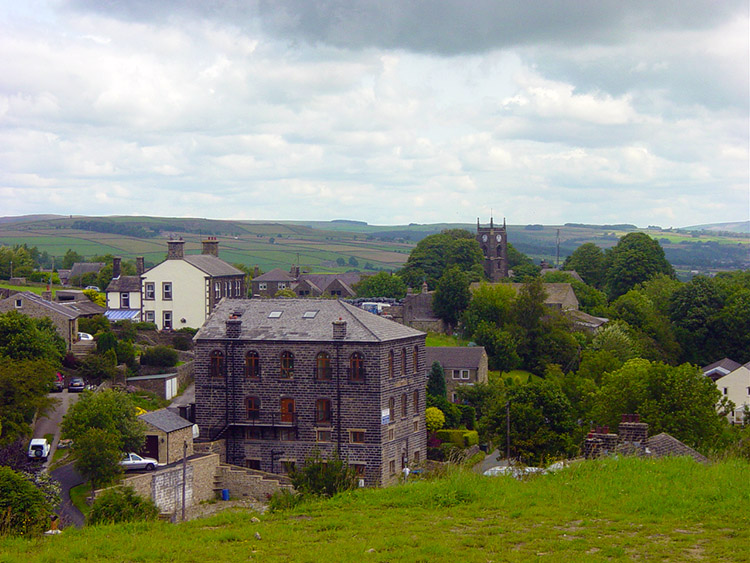 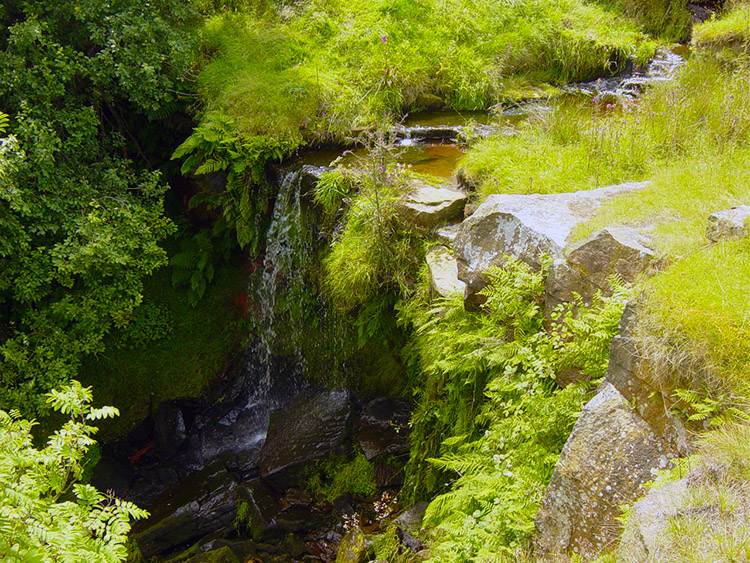 The village of Cowling lies on the A6068 road which links rural North Yorkshire with the industrial mill towns of Lancashire. While most of the village straddles each side of the main road the heart of the village is set down by Ickornshaw Beck. This is where you will find the village church and this is where this lovely short walk begins. After finding somewhere to park leave from the church and follow the road west towards Ickornshaw. After a short while the road bottoms out at the beck and it is here where I left the road and crossed a stile and foot bridge to walk a short distance south before crossing the A6068 and climbing quite steeply up a field to Lower Summer House. From here I looked back and viewed Cowling from above. The area around the church is lovely. It is surrounded by mature trees on all sides and should not suffer from high winds for all the protection they give it. I then looked ahead and continued climbing to Lumb on a walled bridleway that is used by many walkers for I was now on the Pennine Way., I have never done the Pennine Way but recently I seem to have done lots of sections of it. I followed it as far as Lumb where I stopped to enjoy the delightful surroundings of a waterfall which feeds Dean Brow Beck. Here I relaxed for the first time. I needed to for I was already puffed from the climb and this was an ideal spot to stop. 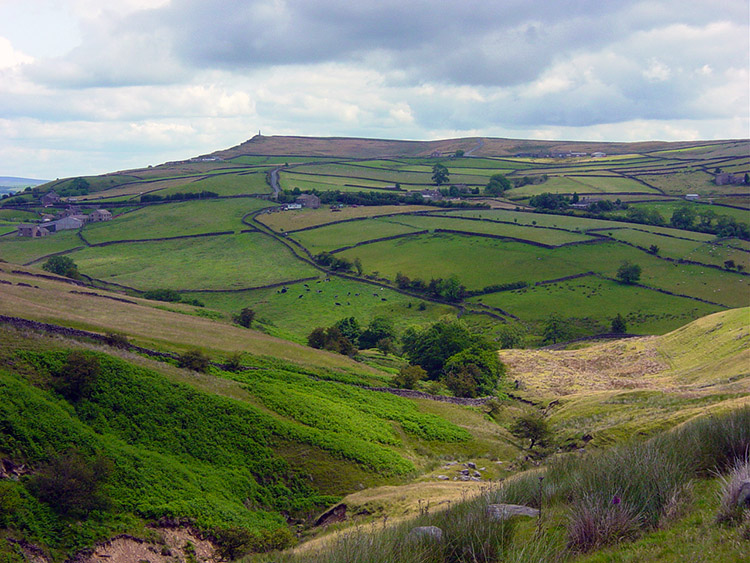 View from Lumb to Wainman's Pinnacle 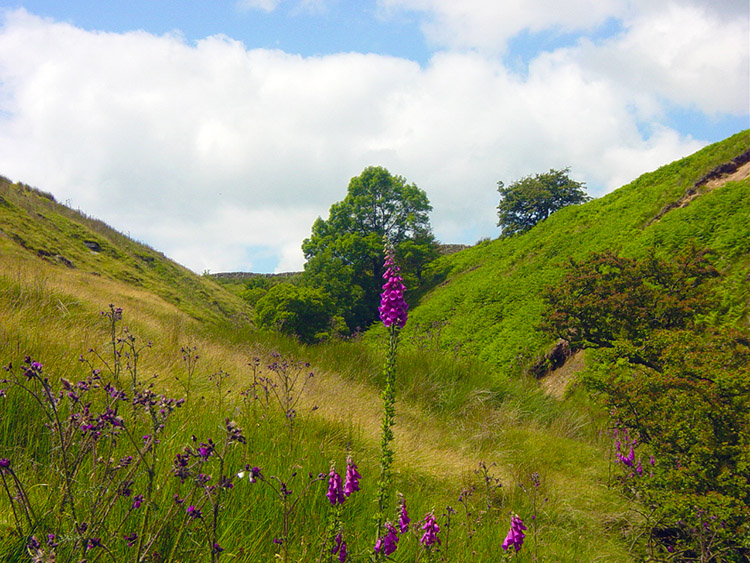 The weather in England during my two weeks in Italy had been very unseasonal and the forecast was not too promising either so I was walking the day after coming back because it was a good day. A ridge of high pressure had made this perfect walking weather and I decided to take advantage. I am glad I did. Going abroad is always good and I did a little walking in the sweltering heat of the Sorrento peninsular while enjoying brilliant views. But it was attrition, always seeking out shade. Walking in hot climates is hard, walking in England is a pleasure. Walking today was certainly a pleasure for after the waterfall I left the Pennine Way and followed Dean Brow Beck in clement conditions with the sun out which made the Foxgloves prosper. The sun also brought out the deep lilac colours of this fantastic showy flower. They were a lovely accompaniment to my walk as I followed the beck east until I left it at Close Lane. I then climbed the lane until I reached the metalled Piper Lane which I followed, still climbing until I turned left into the lane which took me to Hallan Hill. I had now almost completed my climb to Earl Crag and Wainman's Pinnacle was drawing much closer. I made the final ascent to the Pinnacle while constantly keeping my eyes on it. 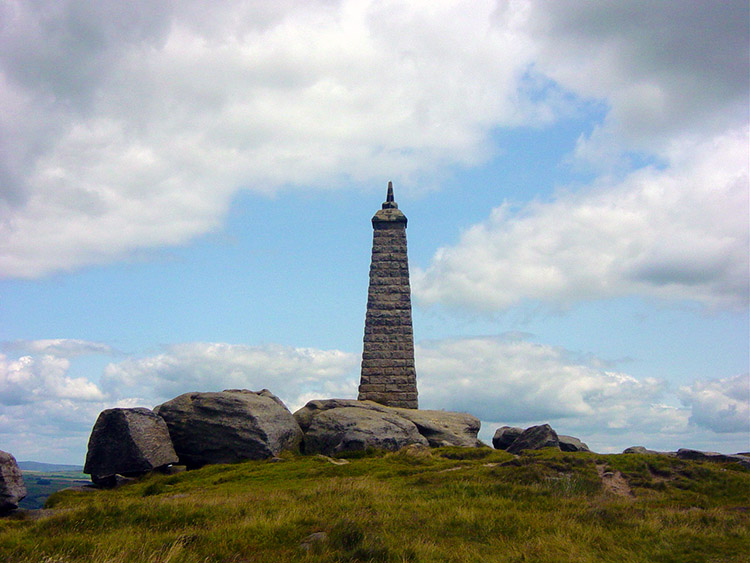 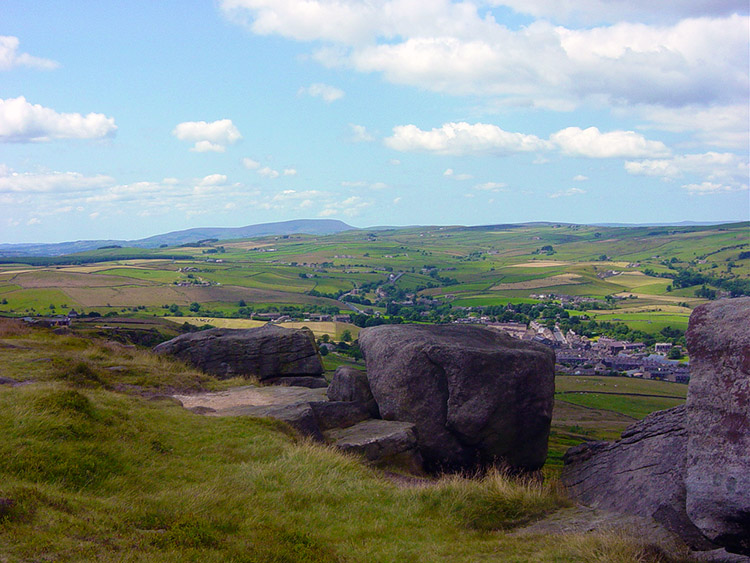 Wainman's Pinnacle had been drawing me since I left Cowling for it had almost always been in my sight line, standing high on Earl Crag with a eminent presence. As I approached it I saw that it is built on solid rock outcrops. This made the scene all the more impressive. And it was only when I stood at the Pinnacle that I could appreciate the marvellous views this place provides. It really is an impressive spot and it was here I paused for a second time. When I reluctantly left the Pinnacle I spotted a couple of people rock climbing. A man on the top of Earl Crag was teaching and the girl climbing on the rope was learning. His instructions were clear and impressive. I watched the lesson for a short while but then moved off because a second feature was drawing me. 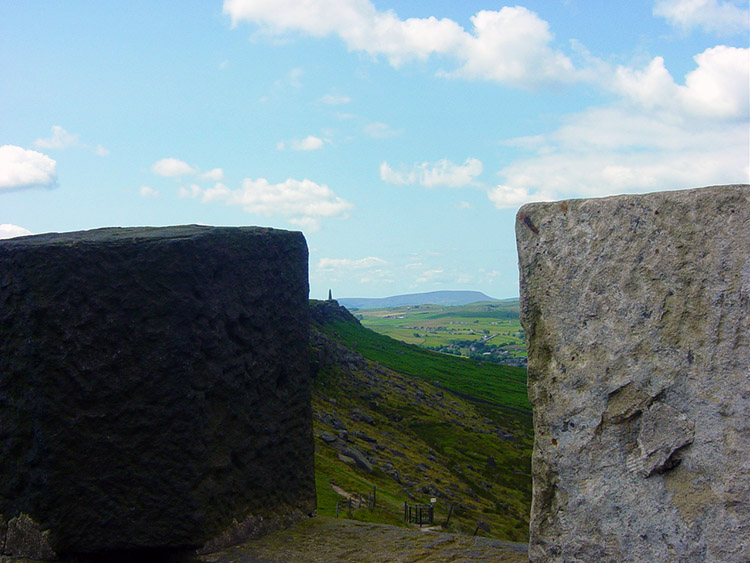 Looking out from Lund's Tower 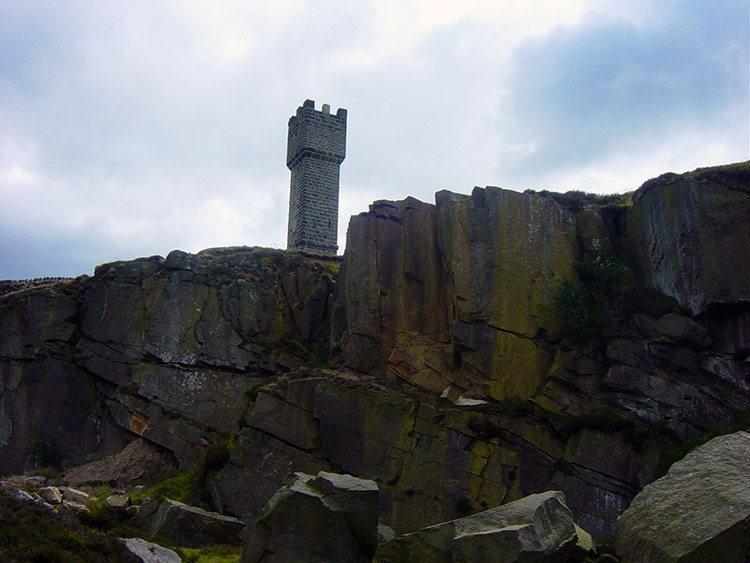 I was now walking to Lund's Tower. I walked along the edge of Earl Crag and soon later I was there. Lund's Tower sits resplendently atop a disused quarry. It has an open doorway so I walked through and took the 39 steps (was the builder a John Buchan fan?) to the top. I enjoyed the panoramic views it provided and then descended before taking my leave of the tower and Earl Crag. It was nice meeting you. I then walked via tracks, road and fields to the edge of Glusburn. 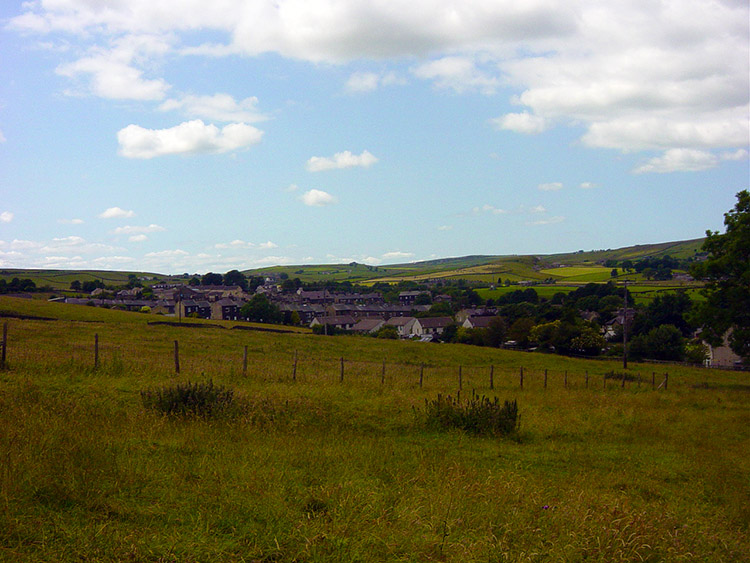 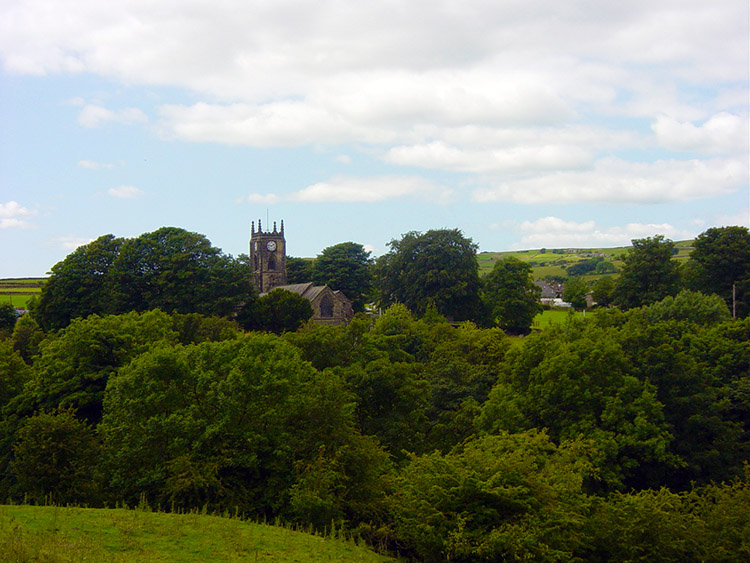 There were no more panoramic views to enjoy on the remainder of the walk but not all was bad. After having to walk through an estate I enjoyed a walk across fields to Birks Bridge and then followed a road to Lane Ends Bridge. This was followed by a lovely stream side walk on the edge of Bannister Wood to Ridge Mill Bridge. Here I left the stream to follow Cinder Hill Lane back to the church in Cowling. What a nice little walk this was and a perfect introduction back to the super English walking. When is the next nice day I can get out for a walk?