Summary: A walk north of Harrogate ideal for a half day or long summers evening. Highlights include four lovely Yorkshire villages which are visited during the walk. All of them have enduring charm and each has its own unique character. Add in a lovely stretch of the River Nidd and a return overlooking the valley below to complete this delightful walk.

The Walk: The Nidderdale countryside north of Harrogate is beautiful. The valley is at a transition point in the area around Ripley, Hampsthwaite and Birstwith Upstream to the source of the river the valley narrows with prominent moors above the hillsides north of Pateley Bridge and thereafter the valley widens as the river passes Summerbridge, Dacre Banks and Darley. Downstream there is the drama of Nidd Gorge followed by a meandering course towards its end when it flows into the River Ouse at Nun Monkton. The walk does not start by the river but a half mile north at the village cross in the lovely historic village of Ripley. The village is most known for its castle which has been the home of the Ingleby family since the 14th century. Its most famous resident was Sir William Ingleby (1546-1618) who was implicated in the Gunpowder Plot but acquitted as just an ignorant accomplice. The next Sir William (1594-1652) supported Charles I during the Civil War and fought at Marston Moor in 1644, when the King's forces were totally routed, making his escape to Ripley and hiding in a priest hole while Oliver Cromwell stayed there for the night, unaware Sir William was hiding. Since then the family have continued to entertain the press with their eccentricities though the present incumbent seems pretty normal by past standards. 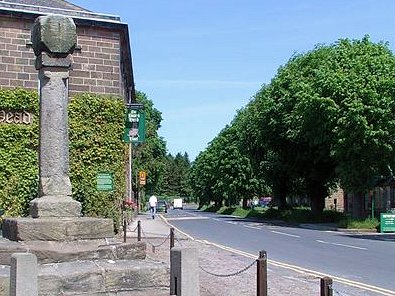 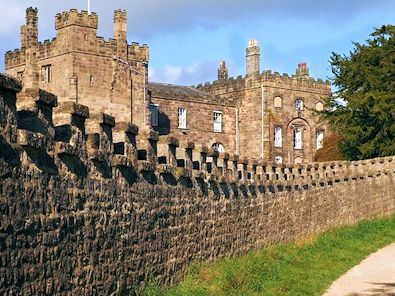 I set off from the village cross on the balmiest of spring mornings. There was not any threat of rain and the temperature was set to soar which made me smile as I ambled out of Ripley along the Nidderdale Way by way of Hollybank Lane footpath running alongside the south side of the castle grounds on a course west towards Clint. The fresh new green of the early leafing trees was making the walk so delightful. I love walking in late Spring and early Summer when the freshness of the new growth provides such invigorating smells to please the senses. After precisely one mile of walking on Hollybank Lane, the last short section through Hollybank Wood I turned left and downhill on a Bridleway leading away from the Nidderdale Way. The bridleway led me down on a hedged track between fields towards the river at Hampsthwaite Bridge. 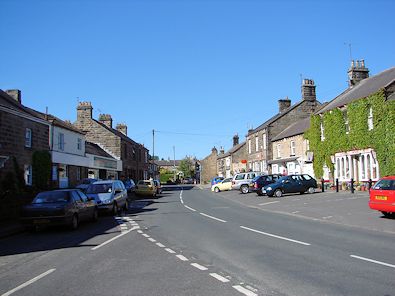 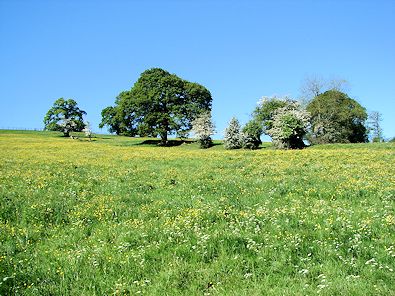 Countryside between Hampsthwaite and Birstwith

I followed the road from Hampsthwaite Bridge which led me directly into the village. Now a quite satellite village Hampsthwaite was historically an important place. In 1304, Edward I, Hammer of the Scots granted a charter to Hampsthwaite to hold an annual market and fair on the Feast of St Thomas the Martyr. While in the village I popped into the local shop for a pie and a soft drink which I would enjoy later by the banks of the river. From Hampsthwaite I continued along the side of the Birstwith road for a short distance before tracking on a path across a field to the riverside which I followed upstream towards Birstwith village. I noted the sheltered fields full of new grass growth and one particular field full of the yellow from Buttercups. 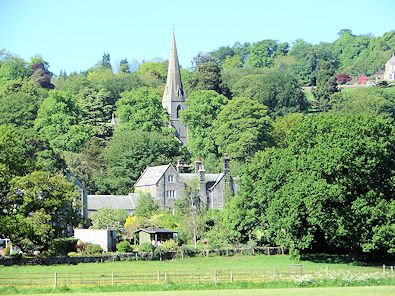 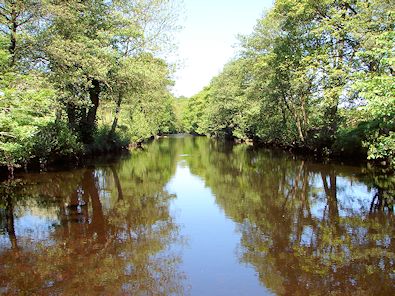 It was not long after reaching the river that I arrived on the outskirts of Birstwith. I was immediately beguiled by the extraordinary beautiful setting of Birstwith Church which was surrounded by lush mature trees. I have an affection for Birstwith since first discovering the village when an Area Inspector for the local water company in the 1980's. That affection has never waned, it was great to be back and even better on foot as I strode into the village. Or rather I ambled as I was in no hurry. I stopped in the village and stood looking over the bridge to the weirs in the river for a good while before carrying on by continuing along the river upstream. After the recent spell of settled dry weather it was in a sedate mood, trickling its way downstream which made for a lovely quiet section of walking. I continued to smile as I ambled along. 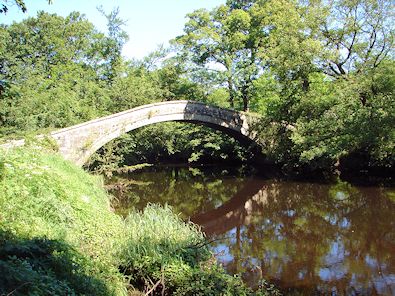 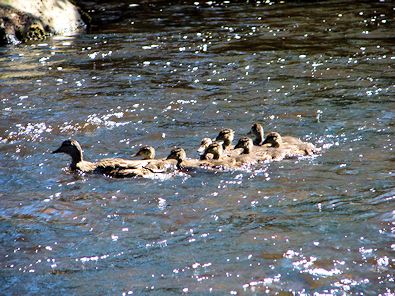 A young family in the River Nidd near New Bridge

I cannot enthuse enough about the section of walking from Birstwith to New Bridge where I was to leave the side of the river. It is only one half mile on the Nidderdale Way which I had rejoined before Hampsthwaite Bridge by bypassing the road section to Clint but it is one of the best riverside sections of the entire Nidderdale Way. I definitely think so and the setting of New Bridge, a packhorse/ footway stone arched bridge is perfect. And this is the spot where I chose to sit and take lunch. As I did so the birds in the vicinity sang with enthusiasm at the choice of their surroundings and then to cap my perfect lunch spot a maternal Duck guided her brood of eight ducklings along the river and right past my picnic spot. What a joy. After my long lunch which I could have extended for some time I made my walk across New Bridge and away from the Nidderdale Valley by climbing the northern slopes of the dale to Catstone Wood, past Dinmore House and towards the village of Burnt Yates which sits on the B6165 linking Ripley to Pateley Bridge. After Catstone Wood and as I gained further height the views began to open out. I looked back to the river and over to the village of Darley. I looked upstream of the river to the area of Dacre Banks and Summerbridge. I looked high to the south west beyond Darley to the highest point of Cote Hill trying to spot the golf balls of Menwith Hill Camp and the grossly ugly turbines of the Knabs Ridge Wind Farm. Great, I could not see either of them so my perfect aesthetic view was maintained and the beauty of Nidderdale unsullied. 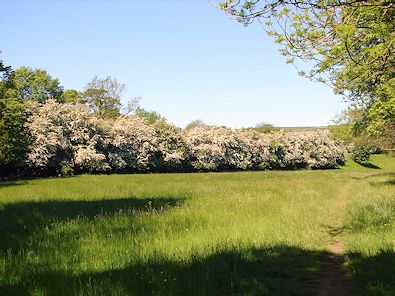 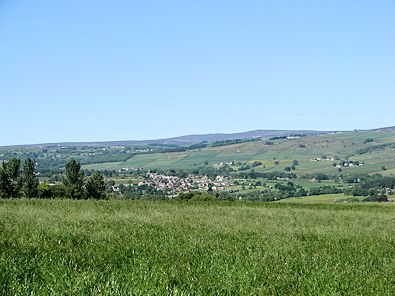 Climbing from the valley to Burnt Yates

After an unnoticeable 100 metres of climbing on paths alongside and across fields to Burnt Yates I came into the village. It is a very quiet place, apart from the traffic streaming along the road which splits the village so I did not linger, crossing the road and heading across more fields, these leading me to Pye Lane which links Birstwith, Clint and Burnt Yates to the village of Shaw Mills. On reaching Pye Lane I did not follow it north to Shaw Mills but immediately crossed the road to follow a couple more field sides to the farm at Hill Top from where I followed the road to Bedlam. Not a place of mayhem as the name may suggest Bedlam is a small hamlet of a row of terraced houses and a couple of farms, like Burnt Yates, beside the B6165. I crossed it for a second time and followed paths across fields and down towards Ripley. Here I could see Ripley Park and the work of manicuring landscapers which has shaped so many of the parks of British Stately Homes into features of wonder. Another credit tick for Nidderdale And then as I was crossing one of the final fields of my walk a young calf decided out of curiosity to joint me for a short few steps of the walk. Like Nidderdale, he was the friendly inviting sort. I smiled, patted him and then carried on with the gleam still across my face. I cannot imagine it left me all day.

(Points of Interest: I received an email from Ian Renfrew who followed this walk, albeit the opposite way around. While he was doing the walk he met a man who told him some interesting facts. First, while on the riverside near to Hampsthwaite the gentleman pointed north in the direction of the disused railway line and to Clint Hall Farm. He said "Back when the railway was being built down the valley the owner of that farm persuaded the rail company to put a stop at the bottom of his field. He then arranged with all the other local dairy farmers to bring their milk to this halt so fresh milk could be delivered to Leeds every day. He called this group of farmers Assosiated Dairies. The begining of the supermarket giant Asda." Secondly he told Ian that the brewer Joshua Tetley was buried in Hampsthwaite churchyard along with his wife. He also said that one of his daughters had met an untimely end and was buried there as well. Finally the man told Ian that on the road bridge over a beck coming into Hampsthwaite from the Birstwith direction was a carving mentioning a hatter in the village, an early example of advertising. He said that the hatter had paid towards the bridge in return for advertising space. ). What you learn on a walk eh.