Summary: Possibly the most difficult walk in the area of Upper Nidderdale but one of exhilaration. It is no easy task to cross the open moors to Great Whernside but for sense of wilderness this walk is the one. And to find the source of the Nidd. 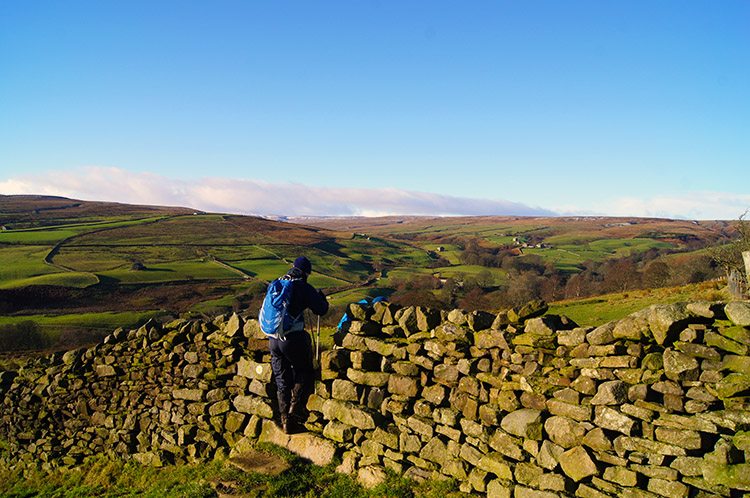 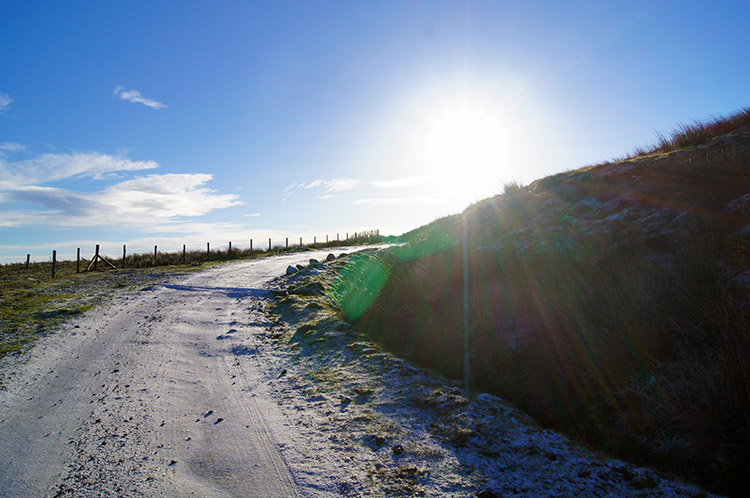 It was a beautiful December morning and I enjoyed looking out from my passenger seat in John's car as we travelled from Harrogate to Upper Nidderdale. Recent snowfall which had settled at over 400 metres promised a walk of contrasting colours and I so looked forward to that; walking the paths and crossing the green fields of the area around How Stean to Riggs Moor and then yomping over snow laden moor to Great Whernside before descending back along the source of the River Nidd to below the snow level at the reservoirs of Angram and Scar House. As it is on beautiful sunny mornings in the crisp midwinter of December we set off as quickly as we could after changing into our boots in Middlesmoor. Standing around was chilly. We began the walk by crossing a series of fields between Middlesmoor and Low Riggs. A little further on at High Riggs, elevation 310 metres the paths and tracks were covered in a dusting of snow. 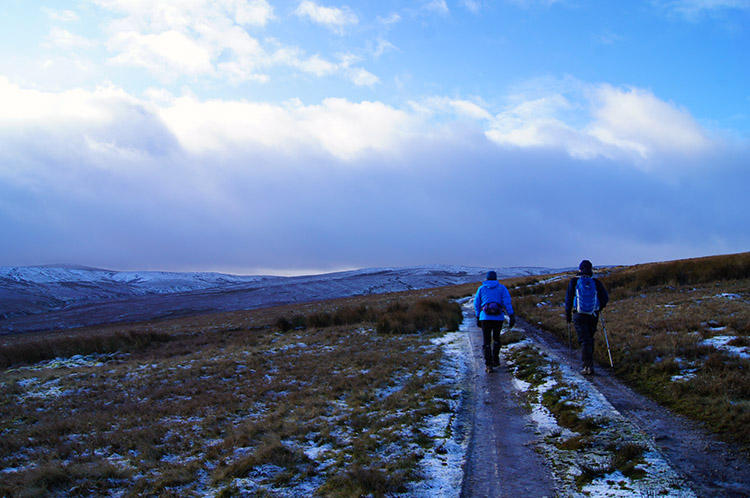 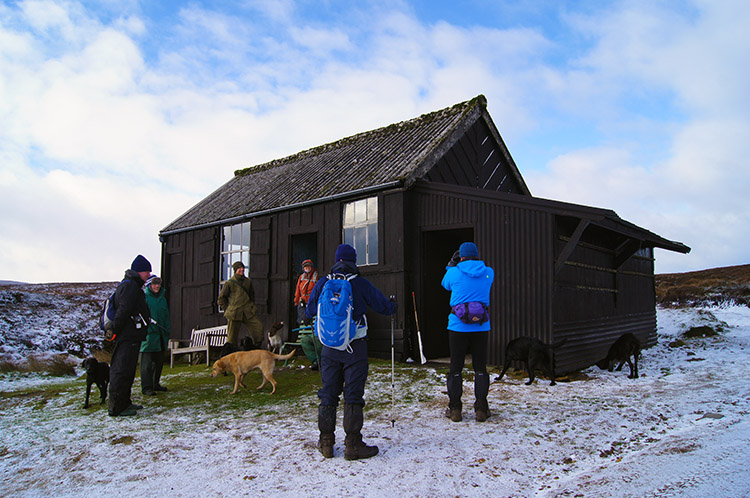 Meeting the Beaters at the shooting hut

From High Riggs the walk continued on to Low West Moor. As we walked along the track leading to a shooting hut on the moor a convoy of vehicles passed us as they headed down off the moor. I thought they were leaving the moor after an early morning's shoot but when we arrived at the shooting hut I found out that was not the case. The shooting fraternity had simply left for a pub lunch before returning in the early afternoon to bag more accommodating birds. Their beaters had remained at the shooting hut, their lunch being a much more humble affair. They were not for complaining though, their day spent on the moor in the midst of such wonderful views would be fair compensation, not to say a bird each for their service. 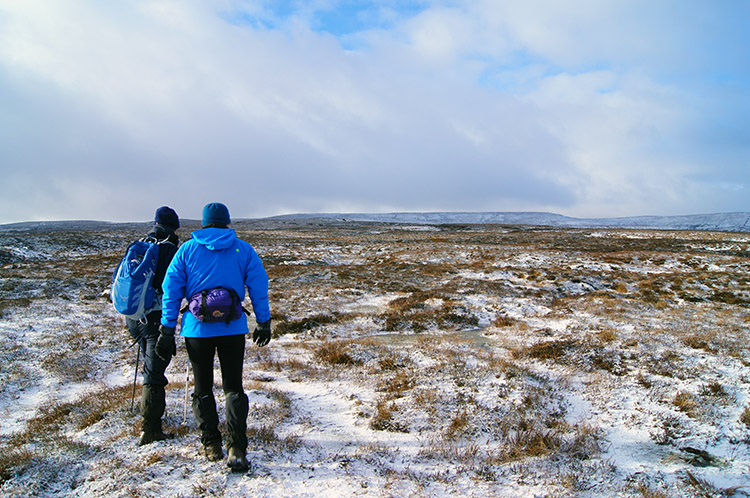 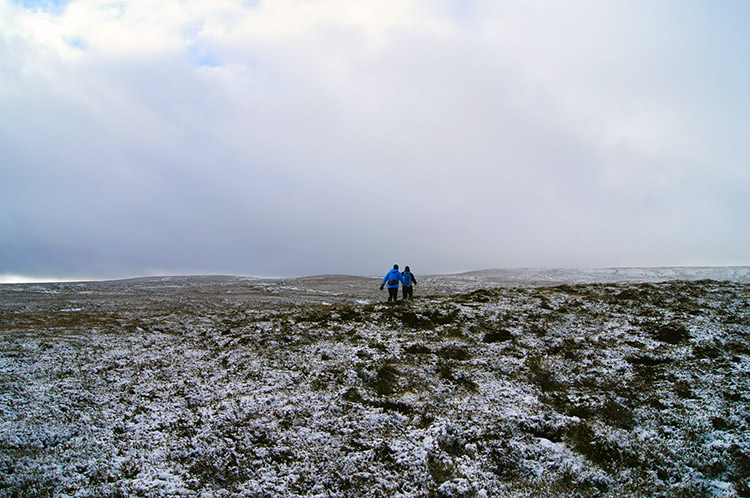 We left the gang of Grouse Beaters to their lunch break and trudged on to the desolation of Riggs Moor. There are no paths to follow after the hut, a course must be plotted and followed. Our destination was the summit of Great Whernside and had I had the foresight to plot it onto my GPS and follow it or even to use my compass then all would have been fine. But I had not bothered to do so and relied on Jez who had planned the walk. So why did I not follow him? The answer to that is that I saw the rough outline of a track leading up to Blake Hill and without map I chose to follow it. I watched Jez and John walk into the void while I walked my chosen course while keeping them in view. 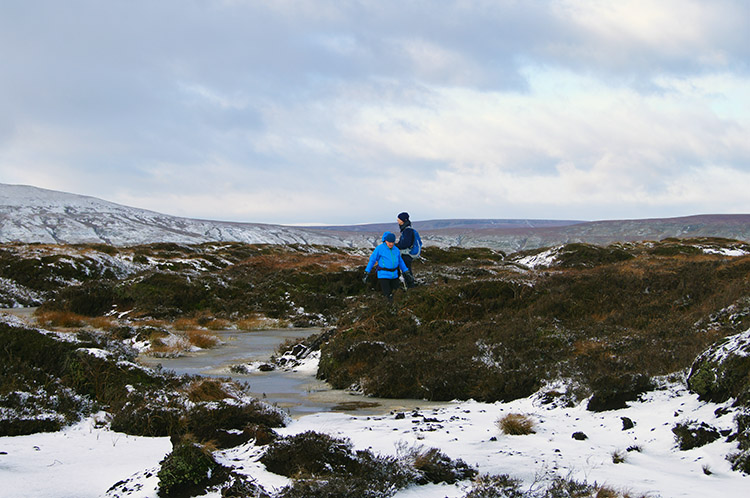 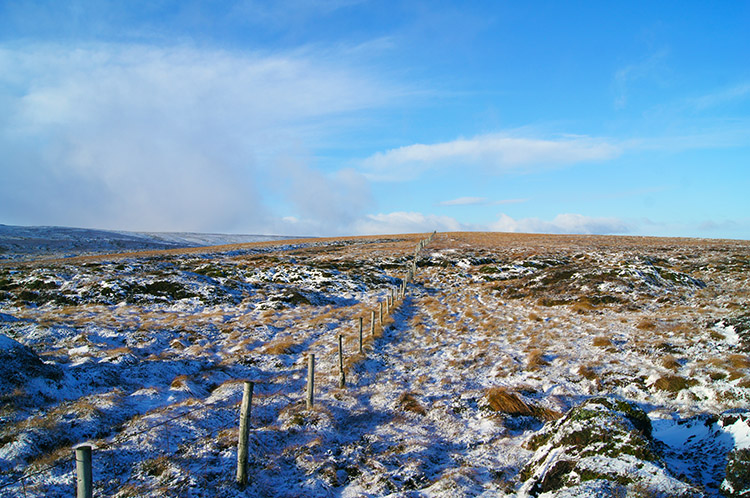 I struggled across the rough moorland which was covered in peat hags, sinkholes, pools and heavy course scrub grass. It was very tiring and I felt it. When I eventually crossed Blake Hill and reached the fence line on the west side I knew I was too far south. Despite being off-line by 500 metres and only 25 metres lower than the lads the loss of height was demoralising. I was struggling and all too late I got the compass out to plot a direct line to the summit of Great Whernside via Stone Head Crag. The climb to the crag was of 80 metres in a little under a kilometer. It was hard work on rough untrodden terrain and I suffered my well deserved punishment for veering off-course. 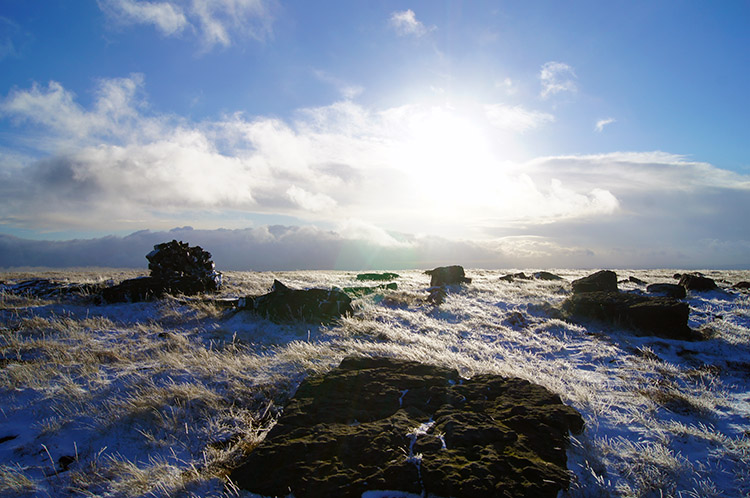 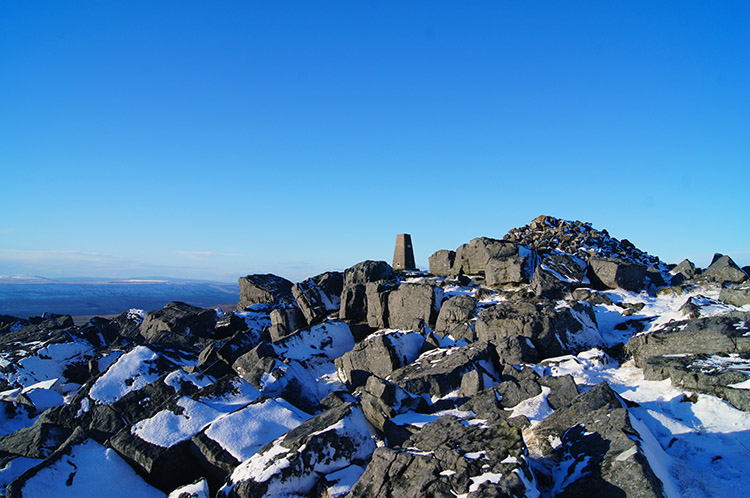 Eventually I reached Stone Head Crag and my head slumped as I put hands on knees with complete exhaustion. I knew the walk today would be tough but to make it even tougher on myself left me with only myself to blame. By now Jez and John were having lunch at the shelter beyond the summit of Great Whernside. I was almost a mile behind them. The blessing, if one could call it a blessing, was that now I had the height. A walk along a practically flat summit ridge awaited me on my recovery. I ambled along the snowy path from Stone Head Crag to the summit of Great Whernside. Compensation for the appreciable effort I had made was given in the form of breathtaking views. The Yorkshire Dales in a covering of snow are spectacular and I enjoyed looking out across Wharfedale to Buckden Pike and Pen-y-ghent, both of which were looking brilliant in the perfection of the white landscape and blue skyscape. 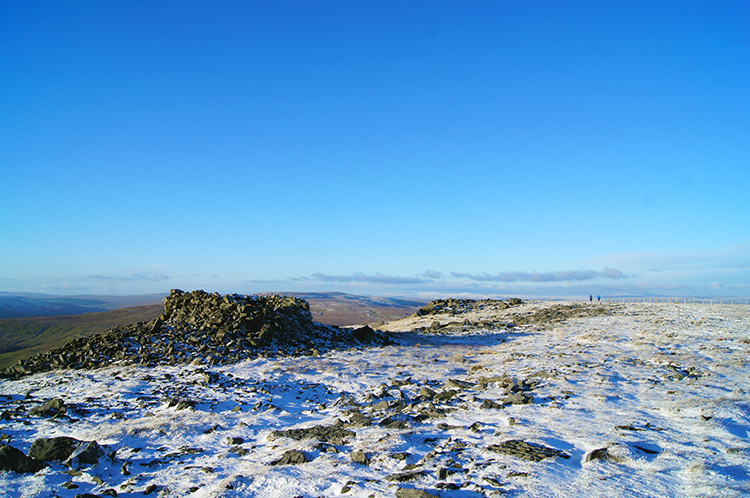 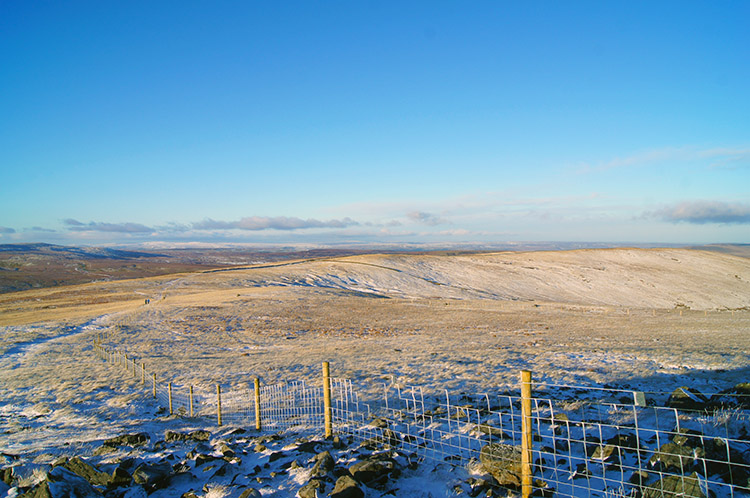 The ridge to Little Whernside

I took my lunch by the summit trig point on Great Whernside as I had desperately needed to top up my flagging reserves after burning off the calories on the strength sapping moorland climb. John and Jez, piqued at my tardiness, had finished their lunch in the shelter and headed off north along the ridge to Blackfell Top and Black Dike End with the intention of keeping on the ridge to Little Whernside and Dead Man's Hill before descending to Angram Reservoir. Having done that route before I decided not to follow and to fulfill a desire I had stored for a while. I wanted to find the source of the River Nidd and follow its course down to Angram Reservoir. Through my own fault on the moor earlier I could now follow a long drawn out plan. 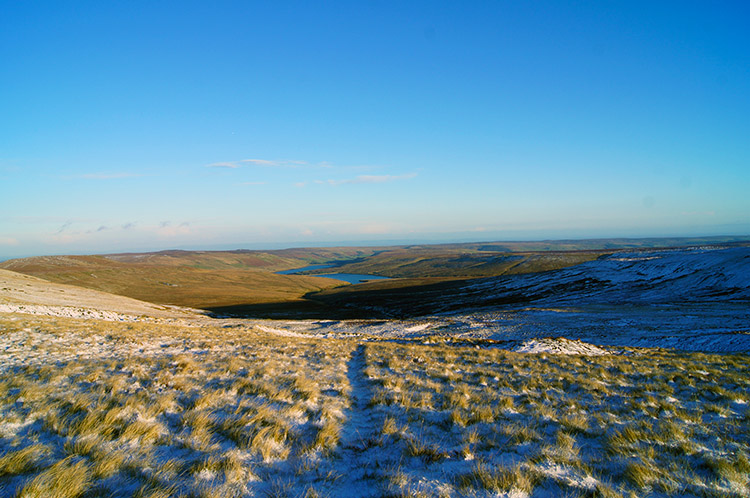 Source of the River Nidd 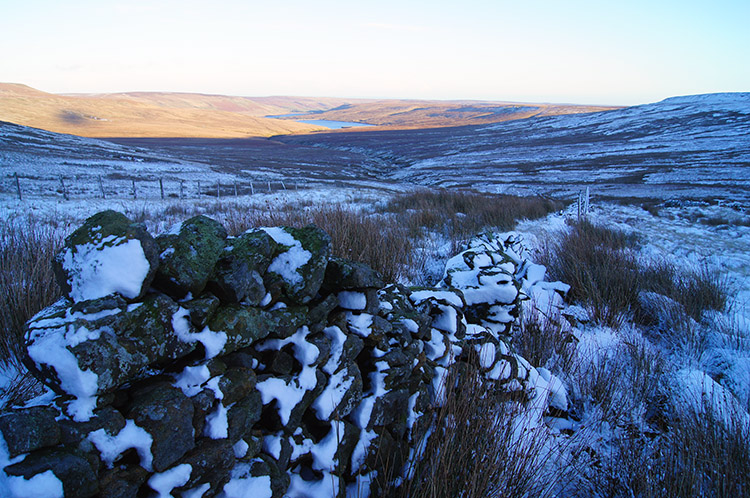 Following the wall beside the evolving river

I left the ridge at Black Dike End and walked eagerly down to Nidd Head Spring. A minute or two later I had found the source of my local river, the one I follow most of all particularly in the Birstwith and Hampsthwaite areas and when in the stunning Nidd Gorge between Harrogate and Knaresborough. At Nidd Head Spring the river is no more than a fledgling brook and I leapt across the young river a few times on my way down the hill. I can honestly say I have now leapt the River Nidd in a single bound on more than one occasion. As I wandered further down the hill which the River Nidd follows during its birth I came to a wall and followed a rough vehicular track which ran along beside it. 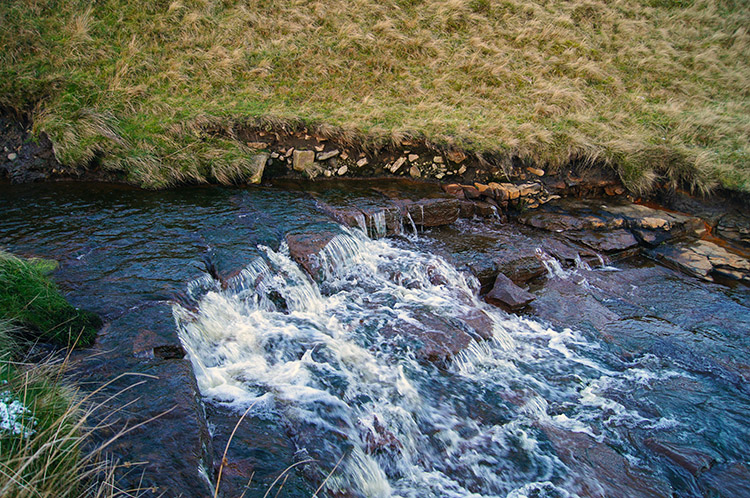 The River Nidd is taking shape 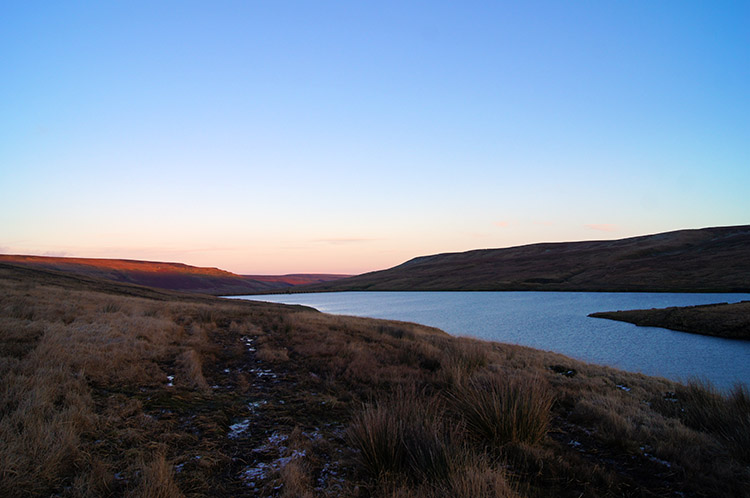 It did not take long for the River Nidd to widen and soon my single leaps across from one bank to the other had to be planned. It was forming its own character pretty quickly. Small waterfalls appeared as I continued on my path close to its natural course and then just before Angram Reservoir it began its first meander. I guess there would have been more meanderings in the next four kilometers of its journey through Nidderdale but they were cruelly absorbed in the cold deep waters of Angram Reservoir and Scar House Reservoir, both built to sate the thirst of the people of Bradford. I reached Angram as dusk was falling and followed the north side path to the reservoir dam. 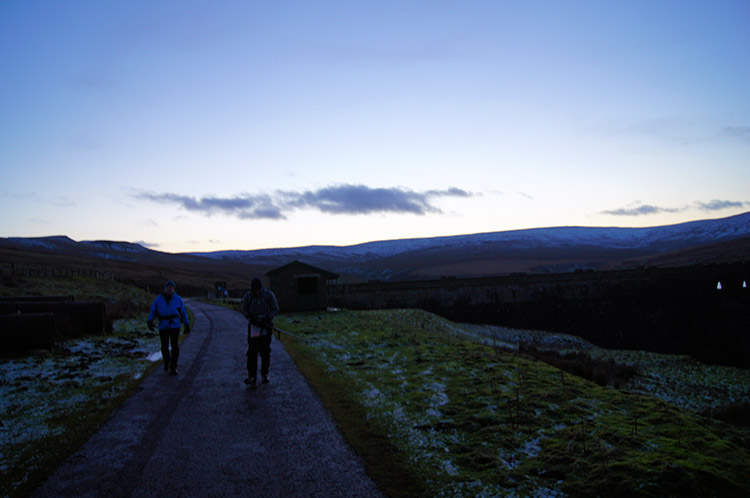 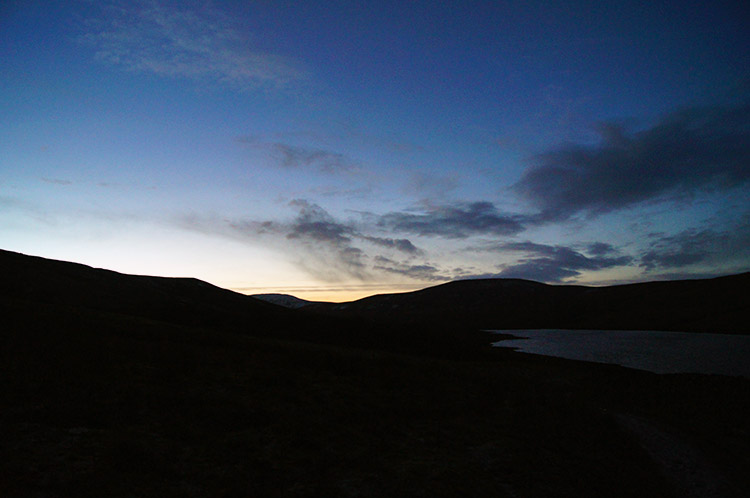 At the dam I met up with a Shepherd herding about a half dozen sheep onto the fells. As I spoke with him Jez and John reached the dam and we resumed company. I explained my error of judgement on the moor and while it was misfortunate I added how it had allowed me to fulfill the wish of finding and following the source of the Nidd. After wishing the Shepherd a good day we carried on together across to a hut on the south side of the dam and sheltered for a late tea-break. 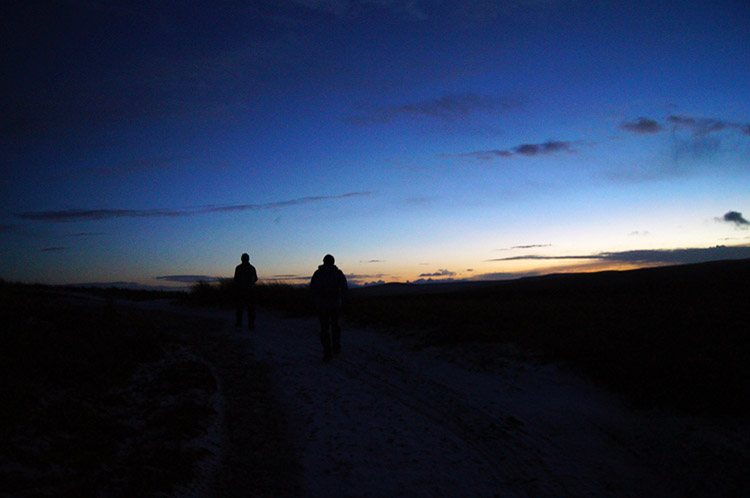 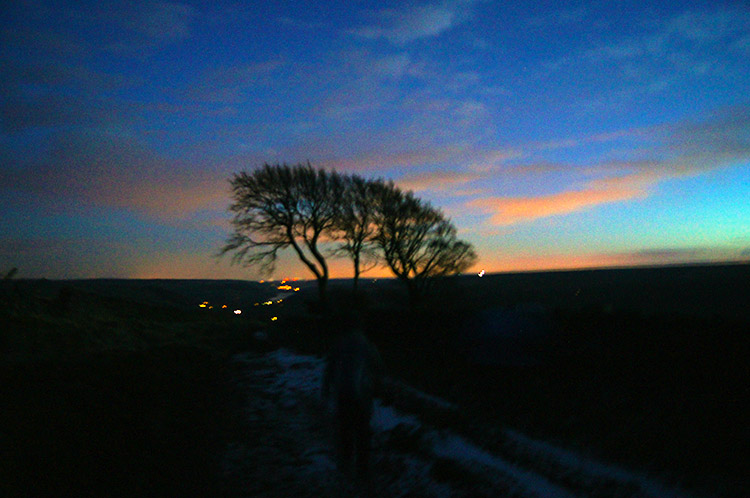 In Moor Lane, the way back to Middlesmoor

After our break we carried on the walk by following the track along the south side of Scar House Reservoir to climb over Scar House Pasture onto In Moor Lane which led us back to Middlesmoor. Proper darkness was falling now, we were not far from the shortest day of the year. As we breasted the top of In Moor Lane the lights of Nidderdale led us home to our finish. Despite not keeping the company I should have I had found my source of the Nidd and I loved it. In fact, despite the arduousness of the climb over the moor to Great Whernside I had loved it all. I cannot say more than that.