Summary: One of my favourite Nidderdale walks, this extended exploration of the area of outstanding natural beauty begins at Brimham Rocks, the iconic and very popular site of remarkable gritstone outcrops which can be explored before the walk or at the end. Whichever takes your fancy. From Brimham Rocks the walk heads west along lanes and across farmland to woodland where Fell Beck is crossed and then on paths up to White Houses before the Nidderdale Way is joined and followed to Blazefield and on to the market town of Pateley Bridge, the halfway point of the walk and ideal for a refreshment break. From Pateley Bridge the walk continues by heading east alongside the young and exciting River Nidd to Glasshouses. After exploring the village the walk continues alongside the Nidd to Low Laithe, then crossing the B6165 and climbing to Smelthouses before the cross country finale back to Brimham Rocks. 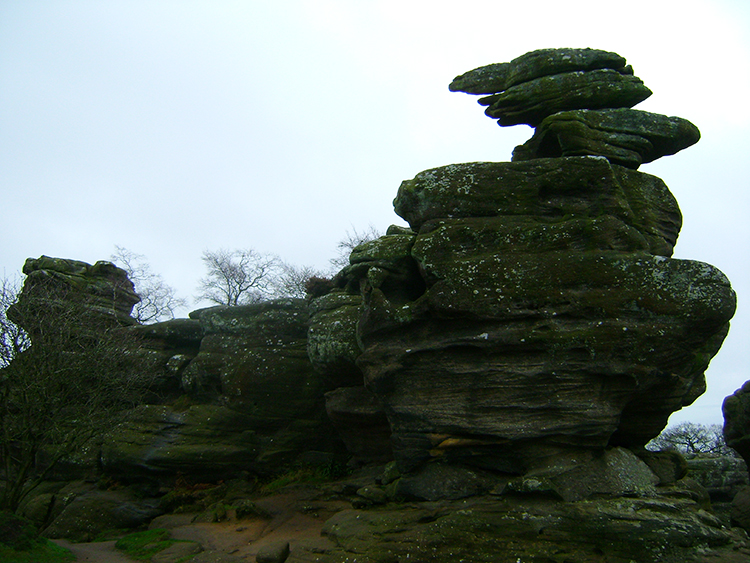 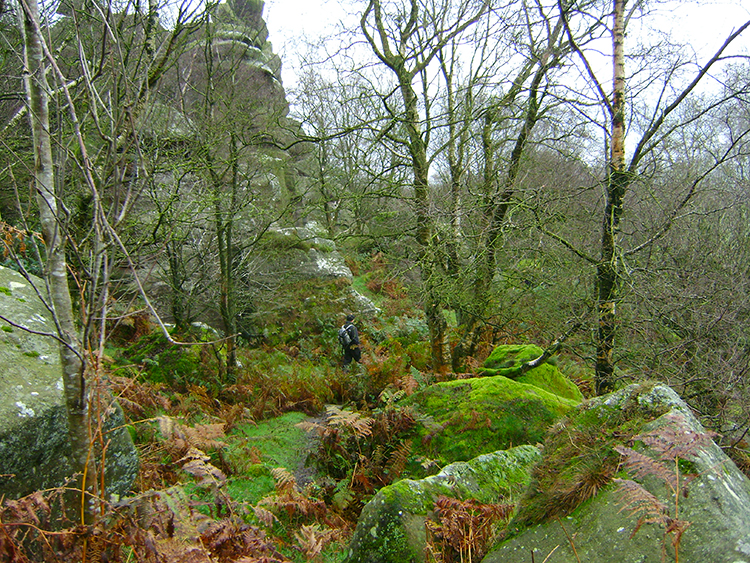 Threading our way through Brimham Rocks

It was a cold and somewhat wet day in mid November when we assembled at Brimham Rocks for the start of our walk. But hey, so what. The alternatives were not appealing at all. Steve had traveled from Rugby in the West Midlands to visit us for a few days and John and Joanne had come across from York to complete up this days particular walking team. The weather was not going to stop us. After having remade acquaintances with each other we were on our way, first by making our way on the good path from the National Trust car park by way of some of the well known and lesser known Brimham Rocks to the National Trust Centre and from there by threading our way on diminutive windy paths leading down to the east side of the gritstone outcrops. After negotiating our way past some rocks and through sparse wooded scrub-land we reached the wide path we knew we had next to follow. 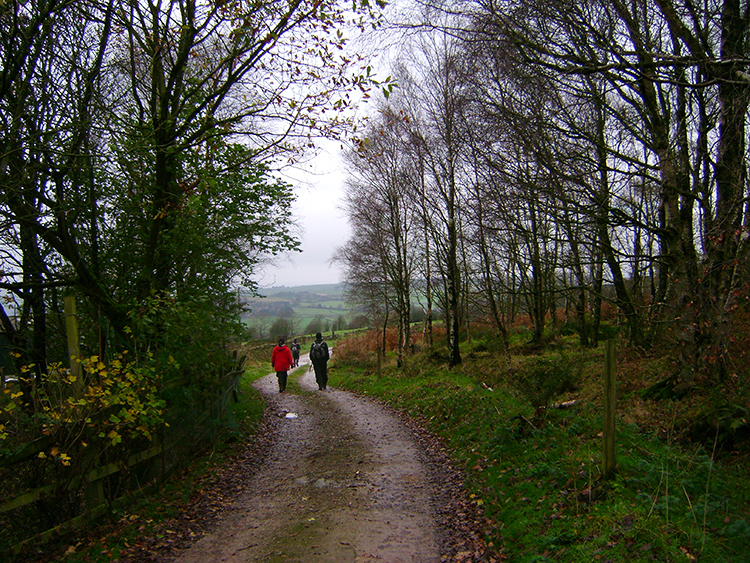 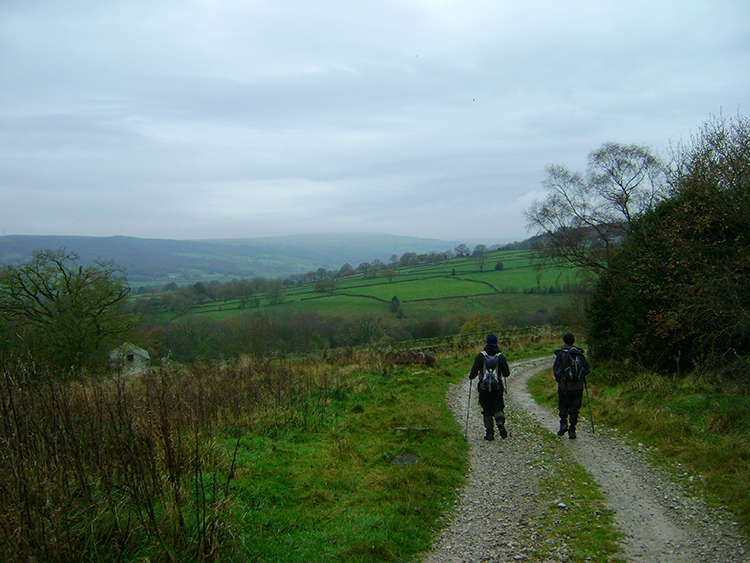 As we walked from the cover of woodland to the open ground Steve paired up to walk with Joanne and Dave paired up to walk with John. Enjoying conversations with friends you have not seen for a while when out strolling in the countryside is one of the pleasures of the walking pastime. As is ambling on behind the group while pleased at seeing your colleagues enjoying themselves. I was happy in my personal environment too, looking out to distant Nidderdale scenes and also observing the land close at hand. All was good with my world. As for the weather; though the sky was heavily overcast with cloud it was not raining. Not yet anyway. 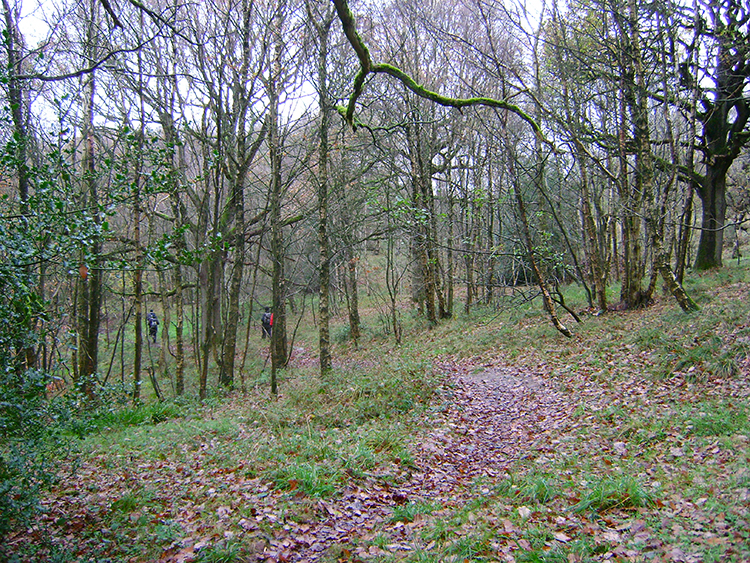 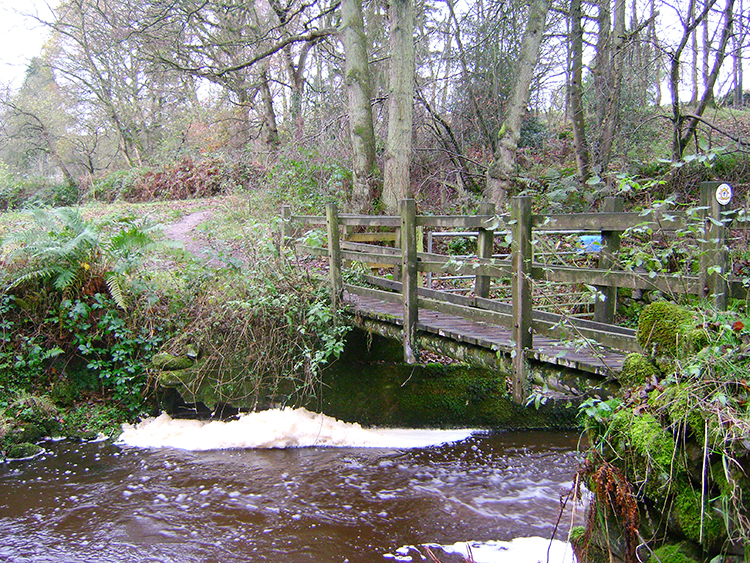 Without really noticing and without much effort we had soon walked across from Brimham Rocks to the strip of woodland covering either side of the land immediate to Fell Beck. Once in the cover of the woodland we worked our way through from east to west carefully. Note there are a number of meetings of paths in this vicinity and more than once I have taken the wrong course. Plot with care and reassure yourself that you are following your chosen path strictly if you encounter this maze of paths too. Luckily on this occasion I managed to follow the path to the footbridge across Fell Beck without deviation and soon afterwards I had correctly picked the right path leading up to White Houses. Job done. 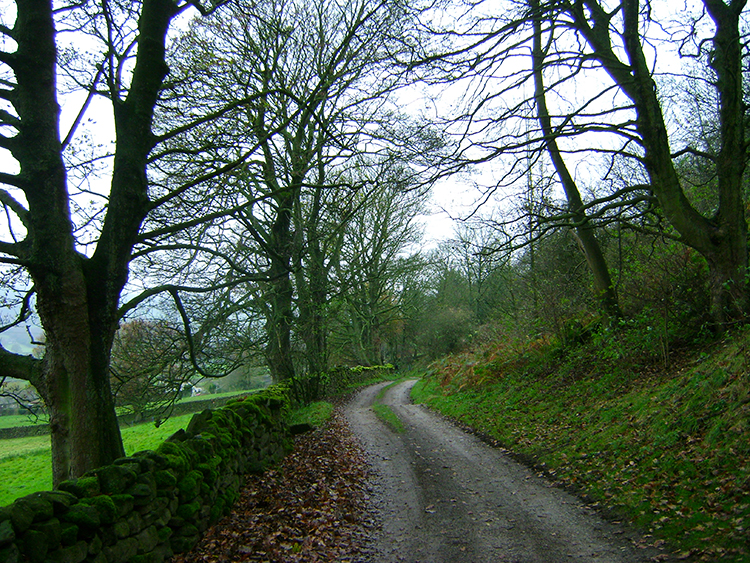 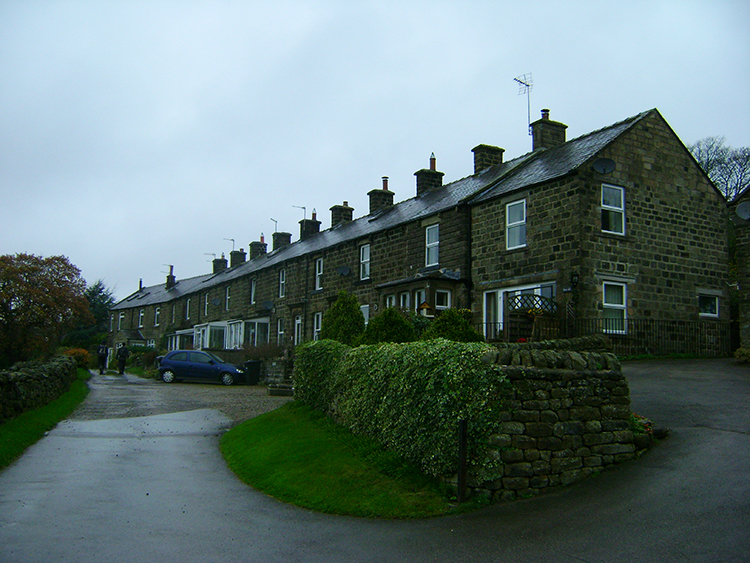 On the way up to White Houses we came across a selection of friendly animals. Amongst these were Geese, Goats, Sheep and Horses. Quite a menagerie it was. I also remember meeting Pot Bellied Pigs around here too but not on this occasion. Perhaps that was one of the times I took the wrong path. After the animals we reached the Nidderdale Way footpath and followed it on both good marked wall enclosed footpaths and along wide walled/ embanked bridleways. We passed the site of Nidderdale Llamas and on doing so I recalled the time my wife and stepdaughter visited the Llamas. While my wife was bending down to fasten her boots her chosen Llama swung around and sent her flying, nearly knocking her out. It certainly dazed her. For us, no incidents with the Llamas and soon after passing the farm business which houses them we reached Blazefield. The hamlet is no more than a row of terraced houses and a few more modern attendant bungalows. Nothing much goes on in Blazefield but the residents of the hamlet have a cracking view looking south across Nidderdale. 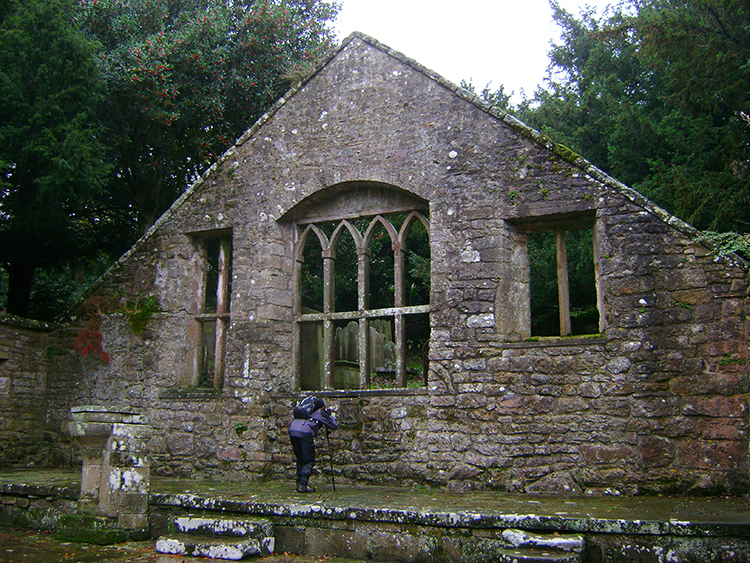 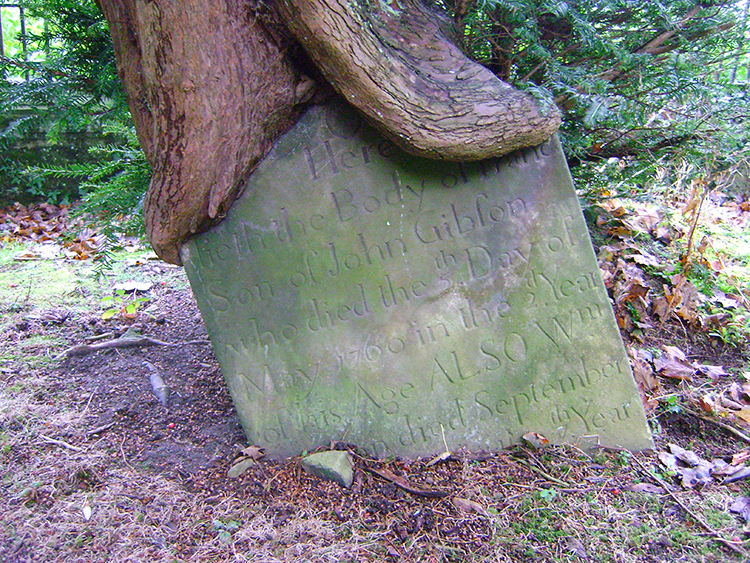 From Blazefield we continued along the Nidderdale Way towards Pateley Bridge. The route took us across the top of Ripley Bank and to a well known viewing platform known locally as 'The Rock'. A sign told us "The viewing platform you are standing on was first railed and surfaced in celebration of Queen Victoria's Golden Jubilee in 1887". The view looks south across Nidderdale to Yorke's Folly on Heyshaw Moor but todays conditions were not the best for enjoying it. It was a grim looking Nidderdale down below and the folly was out of sight, obscured by the clag. Instead we took pleasure to walk from Ripley Way up to the Old Church of St Mary the Virgin. The church is just a shell now; while the walls are intact the roof is long gone. It is a lovely setting for a church and both the church and the church cemetery are well looked after by the local community. Bravo, long may it continue to be so. The place was a pleasure to visit, a contributory part of the walk. 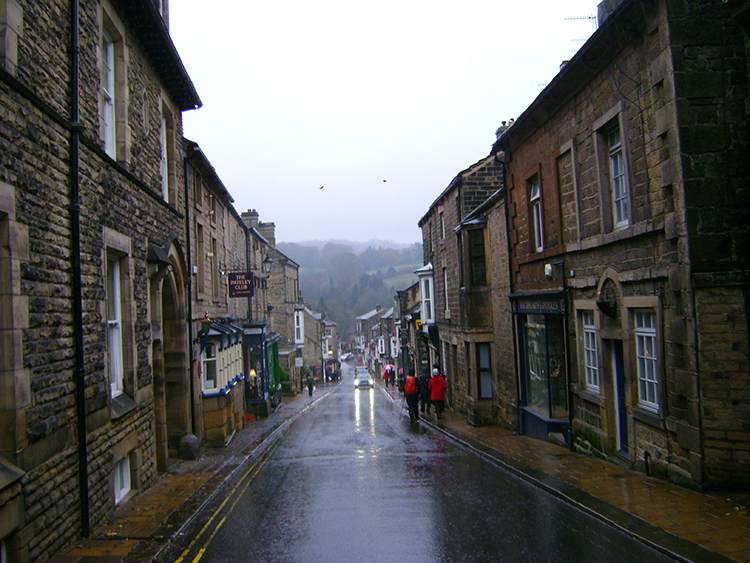 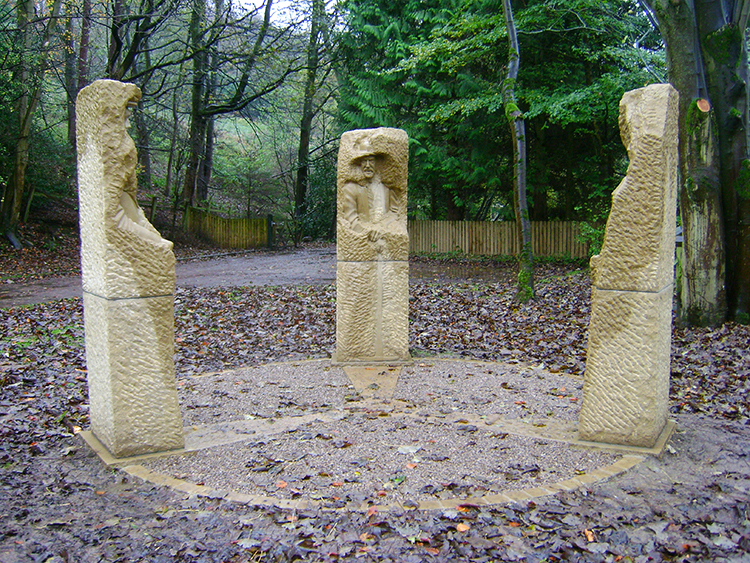 The rain came down hard and fast as soon as we left the church and began walking down Old Church Lane towards Pateley Bridge High Street. It got heavier as we walked on through the town, clouds that had filled with moisture were now well and truly broken. We had decided beforehand that Pateley Bridge was to be the place for a halfway break but had we not we surely would have now. It was pissing down. We walked on through the town and headed for Wildings Tea Room and Riverside Terrace on Nidd Walk. We traipsed in, settled down at tables put together and each of us deposited puddles on the floor. While we refreshed ourselves and warmed up while chatting away to each other I kept one eye on the rainfall outside. The conversation included adventures past and adventures planned in the next walking season. John and Joanne often take a walking holiday abroad, ones in recent years including Patagonia and the Dolomites. I talked of my long distance walks done in the year and ones planned for next year which included Offa's Dyke Path. I looked forward to that.

The rain had not stopped when we set off from the cafe to resume our walk but it had eased. And as the next section of the walk would carry us along paths beside the River Nidd there would be a decent amount of cover too. All was good. Soon we arrived at Joseph Hayton's "Pillars Past", a series of three statues depicting characters from Nidderdale's history. One was a monk, one a miner of local minerals and one a farmer of the land. In the past we may seen many other characters on this site too which is where Pateley Bridge Railway Station stood. It went into decline after World War II and closed in 1964. 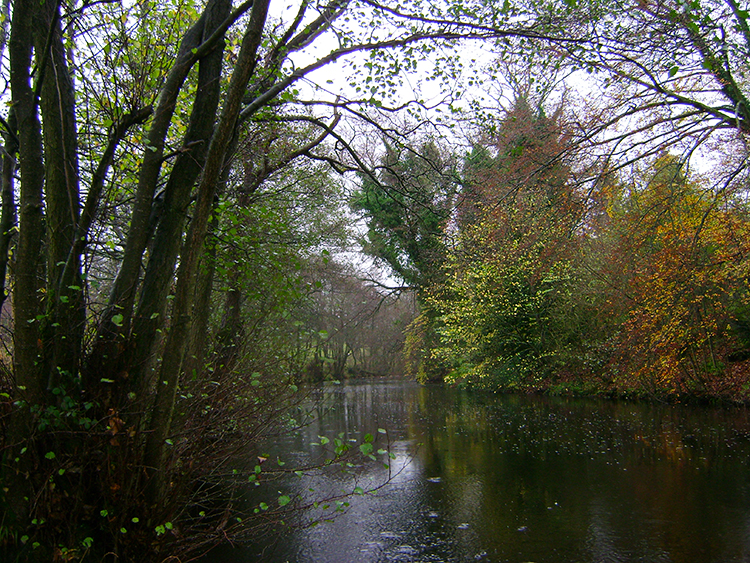 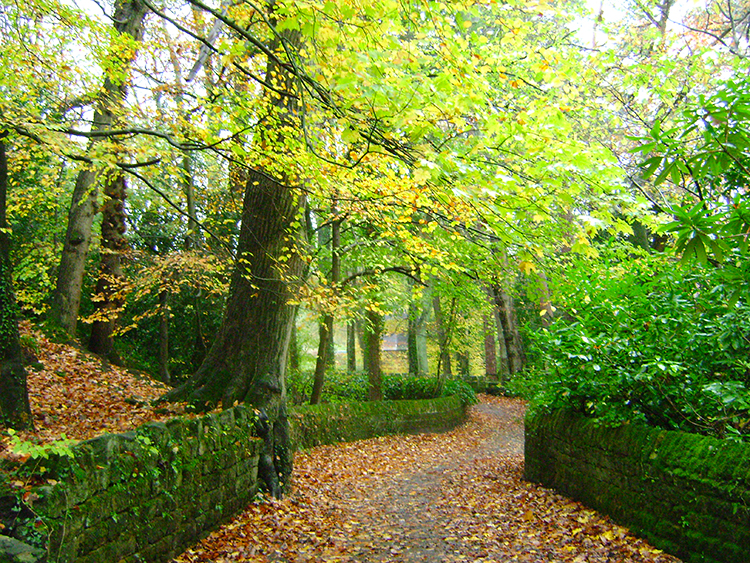 The lane to Glasshouses

From Pillars Past we spent the next half hour of the walk ambling on good paths while keeping close to the course of the River Nidd. Despite it being late in the autumn the trees in the depth of the Nidderdale valley which stood close to the watercourse were still prosperous and in some leaf, it being full of rich autumnal colours. It was a joy to be walking past trees still in some flourish after the stark nakedness of the trees stripped bare of leaf further up the valley. At times we walked on a lush carpet of brown leaf while making our way towards Glasshouses and I enjoyed evoking my childhood autumns by kicking accumulations of fallen leaf about. Coupled with the appealing sights of the waterside this part of a walk was a respite from the signs of impending dark winter days which were so obvious higher up. 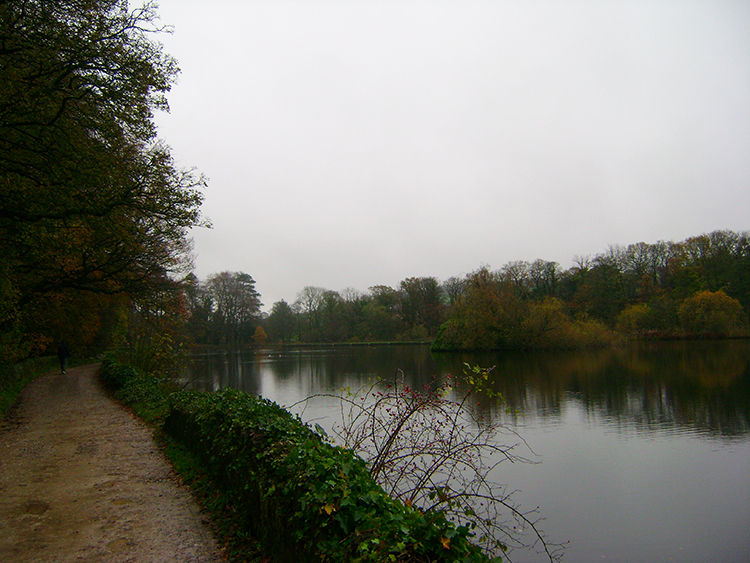 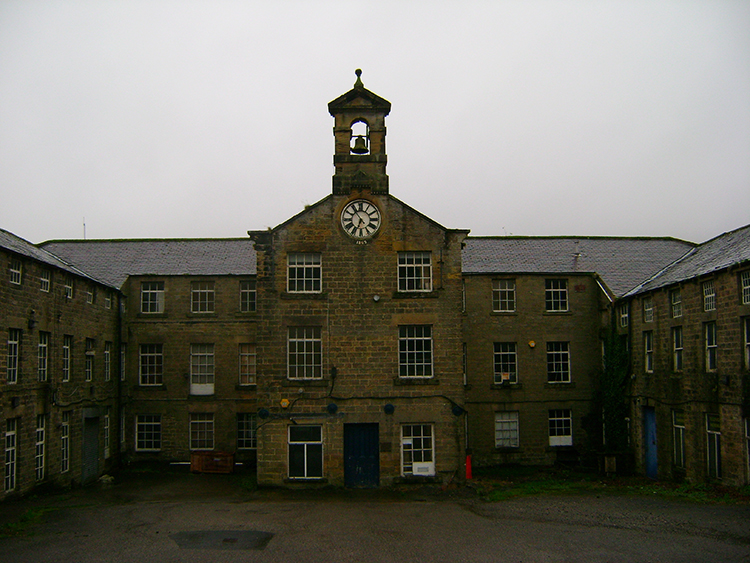 Just before we arrived in Glasshouses we were forced away from the river. Instead of seeing an untamed river we saw a tamed pond which while called Glasshouses Dam is, or was, in fact a reservoir of water made available for Glasshouses Mill. The dam provides the perfect wildlife sanctuary for wildfowl and we saw both Geese, Ducks and Moorhens enjoying the haven of glasshouses Dam. It looked pretty on our dark autumn day, I bet it looks sublimely gorgeous on a fine summers day and proper Christmassy on a snow white midwinter day. It was easy to imagine. After we had enjoyed the spectacle of the dam we arrived in the village of Glasshouses and took ourselves on a wander. Once a hive of industry, Glasshouses is reputed to have provided glass for Fountain's Abbey and rope for the Titanic, the village is quiet now. The homesteads of the village were still and the mill looked deserted. Apparently it is now earmarked for housing (February 2018). 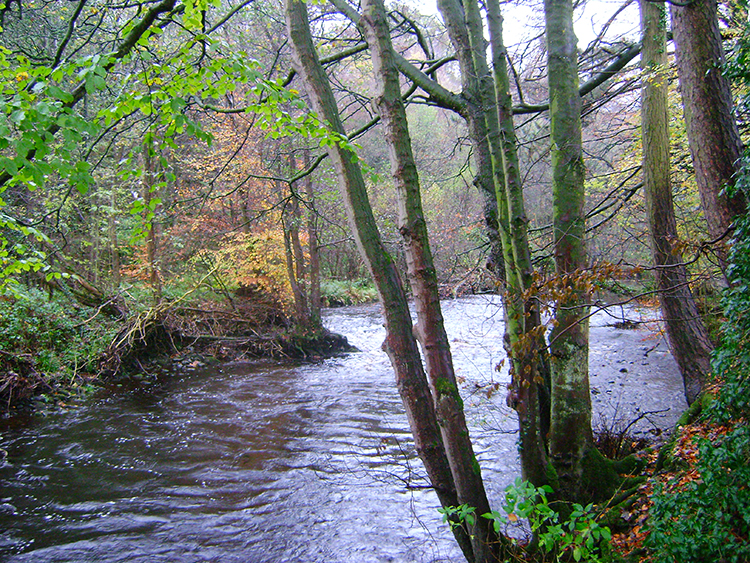 Bend in the River Nidd 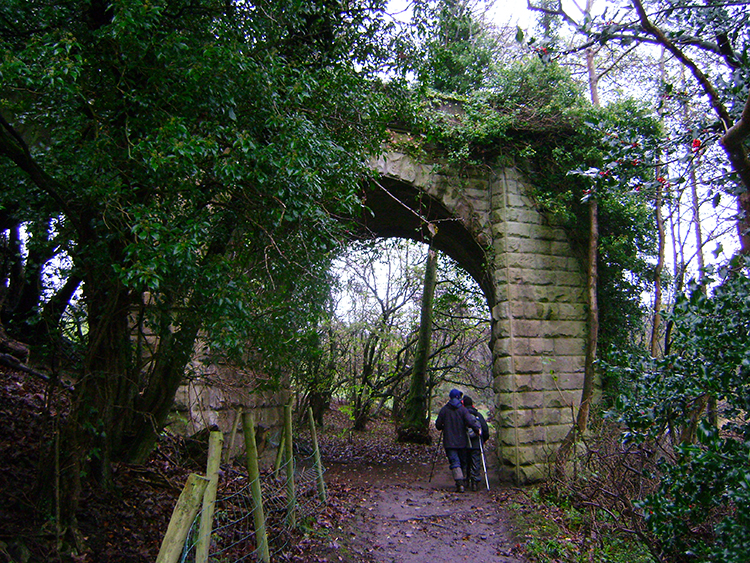 Under the disused railway viaduct

We left the peace of Glasshouses and returned to the riverside, resuming our walk downstream. The River Nidd is still a young and vibrant river here, regularly topped up by streams from both the north and south sides of the valley. We passed one source streaming in off Heyshaw Moor to the south, soon afterwards turning a bend in the river which led us to the remains of the railway viaduct which had served Pateley Bridge with passengers before its termination. After passing under a remaining arch of the viaduct we came to another watercourse serving the River Nidd. We stepped over this one as it reined in from the north side, from the hills around Blazefield and Wilsill. 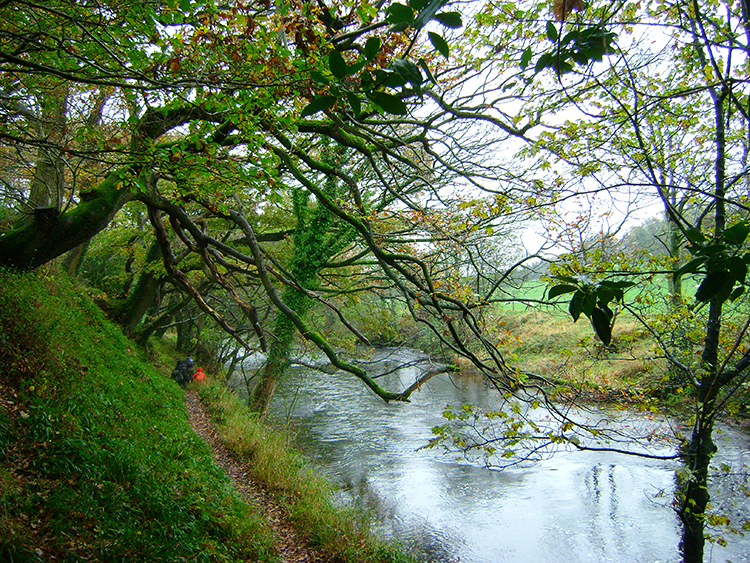 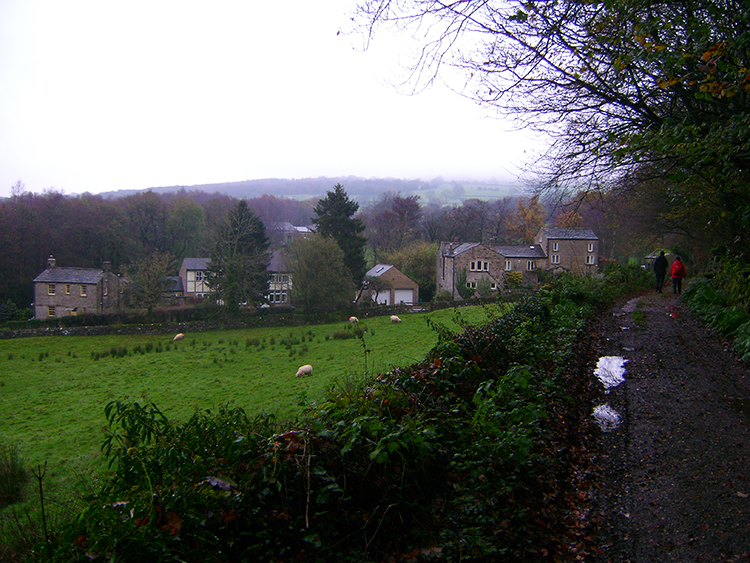 The final part of our walk alongside the river was along a lovely narrow riverside path which kept us close to the water. I could not help feeling the breath of the mighty Nidd at my side, it was a path I could walk up and down in repetition without tiring. Sooner than I had wanted we had to leave the river behind though which we did by crossing a field to cross the B6165 and then follow a walled lane past Knox Hall and Little Mill to reach the village of Smelthouses. The village, like nearby Blazefield, is a small scattering of houses. It probably originated as Estate workers homes, there are managed woodlands and a disused quarry nearby.

From Smelthouses we crossed a few fields and followed a few more lanes while climbing steadily back to Brimham Rocks. The last mile of walking was in fact the only serious climb of the day, 150 metres from Smelthouses to Brimham Rocks and a bit before that too after leaving the riverside. I had hardly noticed though, the good of the walk had been done, thoroughly enjoyed too, but now the heavy rain had returned and I was getting wet. Such a great walk, shame it was a crap weather day. Must do it again....