Summary: This walk is centered on Thruscross Reservoir, the first in a series of five reservoirs which comprise the Washburn Valley water supply system serving North Leeds. From the Yorkshire Water car park on the south side of the reservoir the walk is taken in a clockwise direction and staying close the the reservoir for the duration of the walk along the south-west side to reach Whit Moor Road at Duke's Hill from where a path is followed edging around Whitmoor Farm and on to the ruins of Holme Field Head. A path is then followed through woodland and parallel to the River Washburn, some of it a little rough due to landslip when my wife and I walked it, hence the moderate rating for the walk. After crossing the River Washburn by a footbridge the walk heads up to open moor and crosses two moderate hills before dropping back down to the north side of the reservoir. Afterwards a short walk leads from the reservoir through pretty woodland to a final short roadside section across the reservoir dam and back to the start. 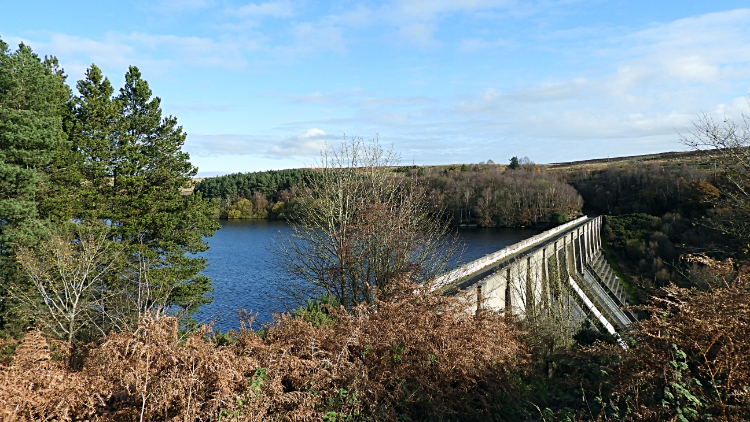 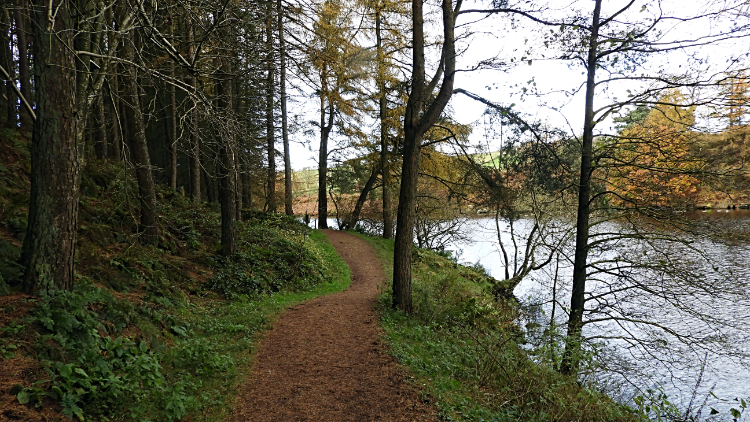 It was a cool but bright late November day and with some of the more sheltered trees still holding on to a bit of leaf colour my wife Lil and I decided to go for a walk before the grey of winter really set in. It was past eleven in the morning by the time we arrived after a fifteen minute drive from home and quite a few vehicles were already in the car park. Still, there was plenty of room for one more. Five minutes later we had boots on and off we went walking west on the path following the south edge of Thruscross Reservoir. We met several groups of walkers on the first half mile, all enjoying their walk like us. The encounters became less though as we got further away from the car park. Not everyone was going all the way around. 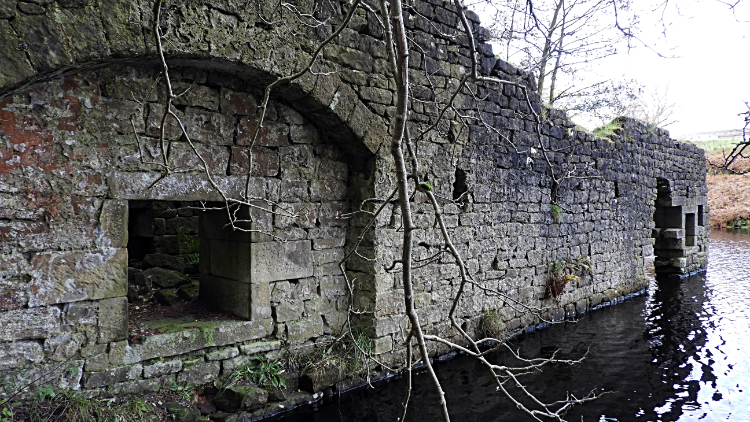 Ruins of the mill of West End village 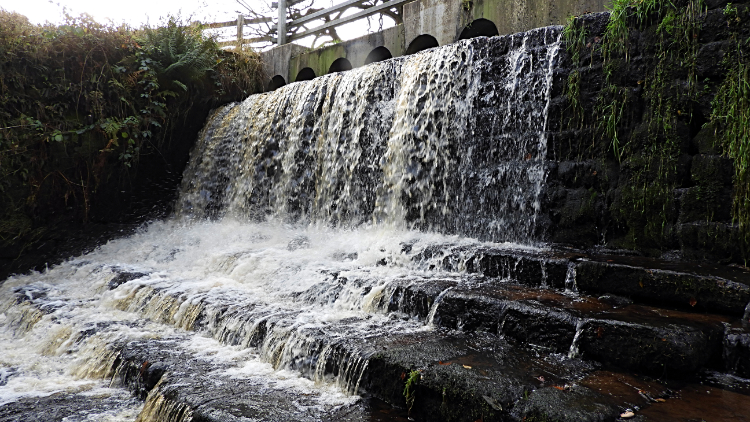 The walk was delightful, leading between high upright trees in parts, following the reservoir shore line on others and once climbing inland a little way to reach a footbridge crossing Dike Hill Beck. After crossing the bridge and walking back down to the reservoir we walked a little way further, soon arriving at a stone building rising above the waterline in the reservoir. We had reached the site of the mill, central to life in a once thriving but now sunken village. West End was that village, doomed to nonexistence when the dam was completed and the water rose to consume it in the 1960's. Here is the village in life and here is the church disappearing during the flooding. Incidentally I had first walked around during Thruscross Reservoir in a year of severe drought in the 1990's when I crossed the village bridge myself. Now, Lil and I continued our walk past the sombre site and through more woodland by the inlet of Capelshaw Beck to reach Whit Moor Road. Here we crossed the beck road bridge by a weir to follow the road a few yards up to a gate leading to the next stage of the walk. 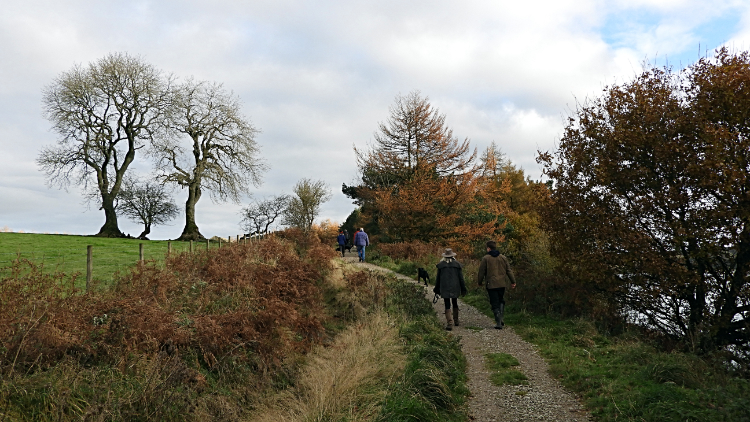 The path to Whitmoor Farm 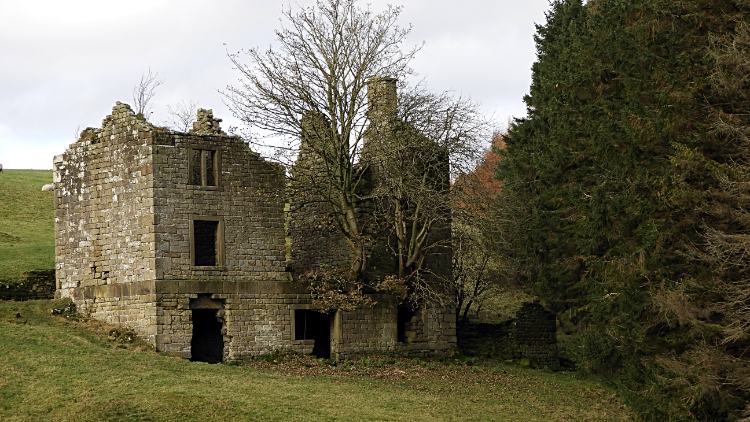 Now climbing from the reservoir we followed a path rising a little from the reservoir and curving with the shoreline from eastward to northwards, in doing so following the River Washburn upstream to not too far from its source at Washburn Head on Pock Stones Moor. The first part of this stage was in the open with tantalising views of the reservoir though the golden leaves of trees and looking the other way with views across pasture fields with lambs grazing to the buildings of Whitmoor Farm. And closer to hand were the ruins of Holme Field Head. Once occupied by people the homestead now had a large tree growing out of the living room window. 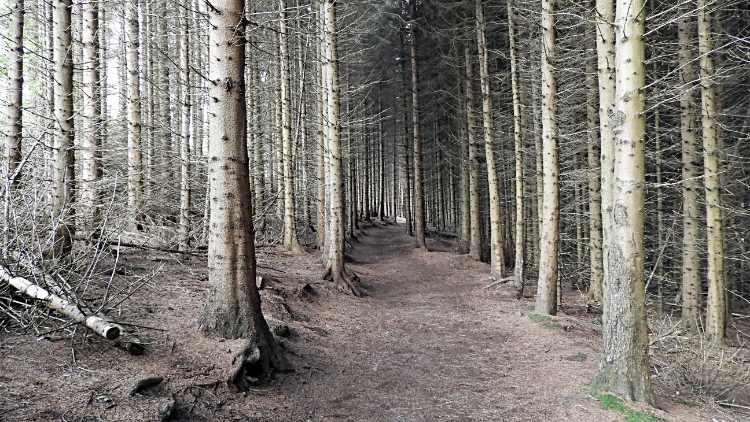 Path through the plantation 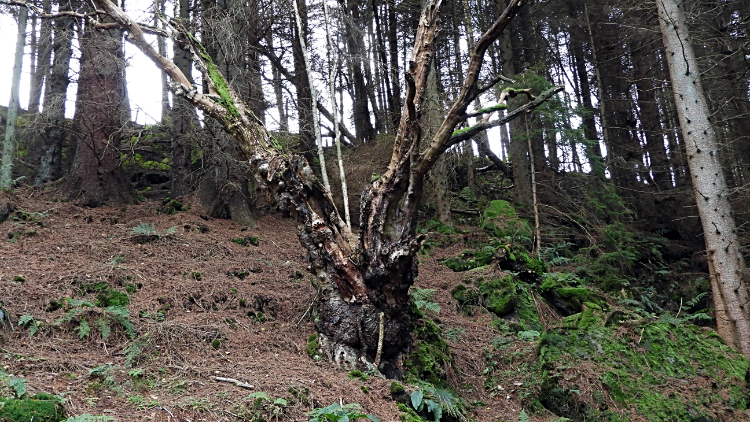 Area around the landslip

From Holme Field Head it was back into the darker environment of woodland. More like forestry plantation, the path led through lines of upright poles, typical of fast growing timber sourcing trees. The definite path kept to the top side of the plantation leading down to the floor by the Washburn river but further in towards the north-west limit of the forestry the path disappeared. The cause being a recent landslip which must have happened during one of the recent October storms. Scramble up to the edge of the trees or scramble down to the river. That was the choice and for us it was a simple one. 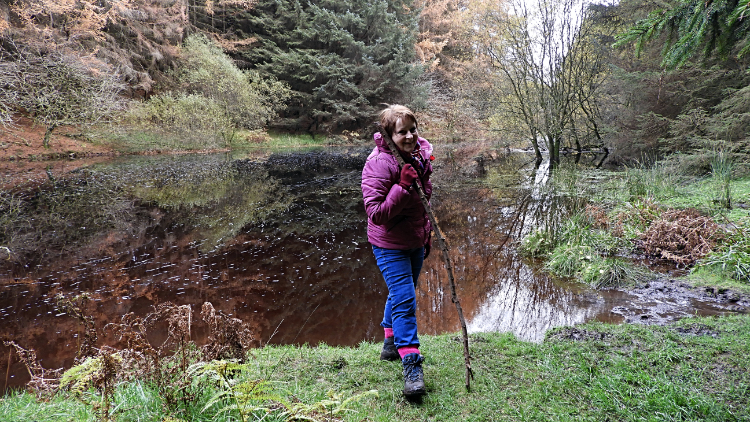 Pretty stretch of the River Washburn 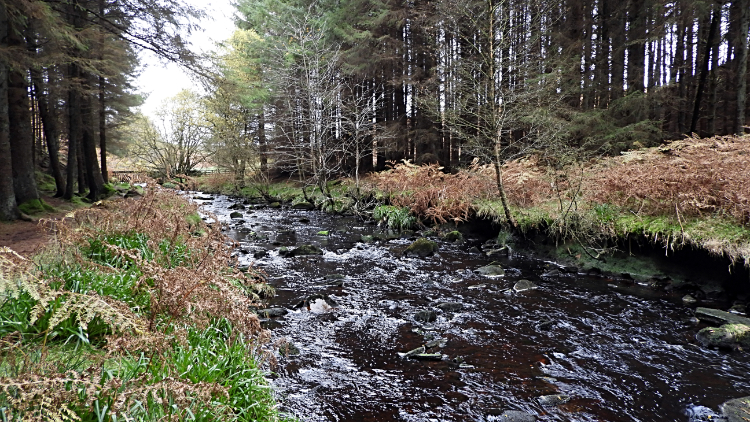 Climbing up and around the edge of the trees may have been the simpler option but our scramble down, over a couple of deep rifts and through a narrow gap between fallen trees was by far the best choice. For at the bottom we arrived in a beautiful idyllic stretch of the River Washburn just before it disappeared for its transit across Thruscross Reservoir. Down by the water there were the forestry trees but others too, all conspiring to provide a wide array of luscious autumn colour. Just about the last we would see for this season. All was peaceful bar for some Ducks quacking over on the far side of the river. It was so lovely. As was the walk along the river, following it upstream as its waters rushed towards the wider stretch and the vast reservoir. We walked along its south side for a couple of hundred yards to where the forest ended by where Hood Spring plunges into the Washburn. (Note: The maps and route files show the main route, not our escape to the river). 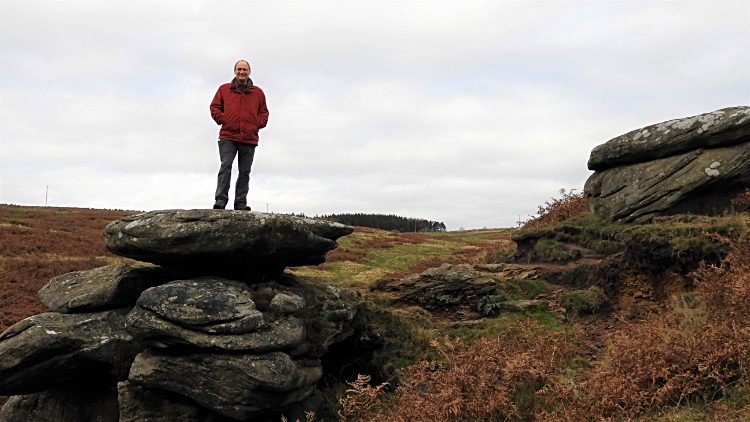 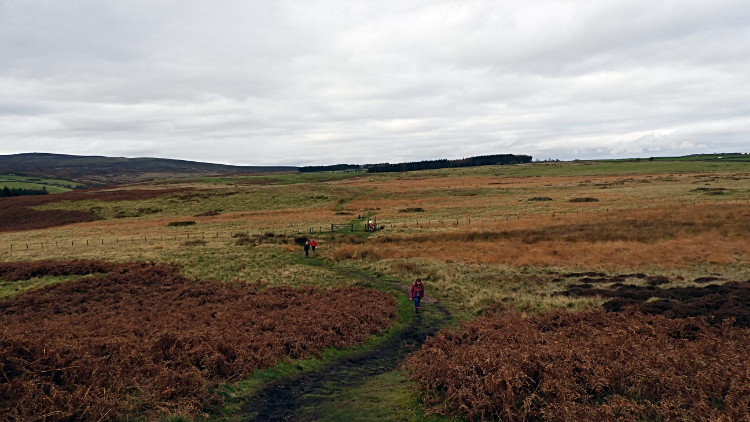 View of Roundell's Allotment from Near Comb Hill

At the west end of the forestry we arrived by a high wooden stepped walkway leading up and out of the trees to a metal footbridge leading over the river and leading up a steep path to Far Comb Hill. The climb was only forty metres and it led between a series of shapely gritstone outcrops which alleviated the effort and heightened the interest. We could not help ourselves, leaving the path and jumping up onto the top of the outcrops. The transition from deep in forested valley to wild moor was quick indeed. Next we walked across the dark brown grass and fern land of Roundell's Allotment, making our way from Far Comb Hill to Near Comb Hill. The difference in height between the two indistinct humps was just five metres and in fact we climbed higher still after them, topping off at just short of 270 metres high near Nell Stones. We had great views of the reservoir up here, it being fifty metres below. After the top height we descended nearly all of that fifty metres quickly. By way of Springs Crag to meet the northern reservoir side path. 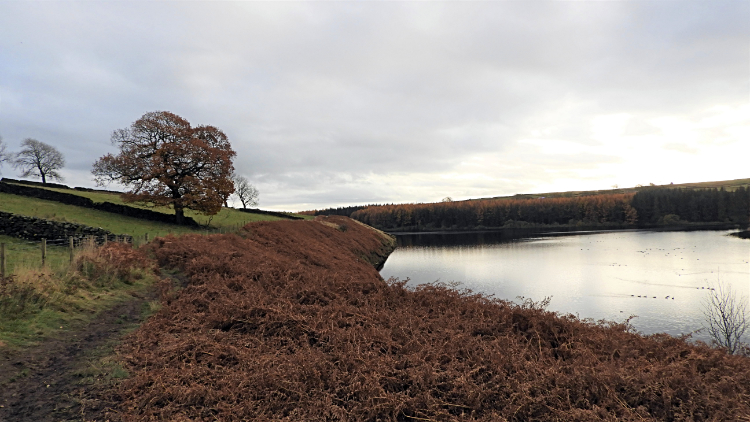 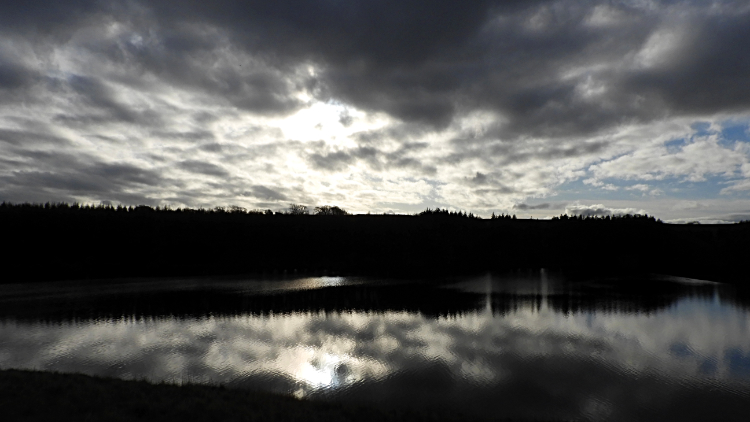 Being the last week in November and less that four weeks before the winter solstice the sun was never going to rise high. Now, back down by the reservoir at one thirty in the afternoon, the sun shone in the western sky appearing through clouds just above the forestry line and in doing so presenting a back and white mirror image on the becalmed reservoir surface. It was a beguiling spectral picture to behold. Beauty beyond words. In the water there were around two hundred geese, in separate groups of just a few to around twenty, each division making separate streamers across the water. It was another beautiful sight. 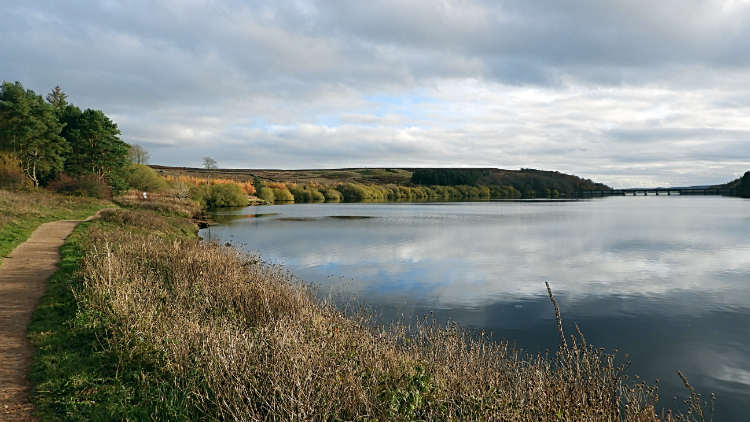 The north-east side path 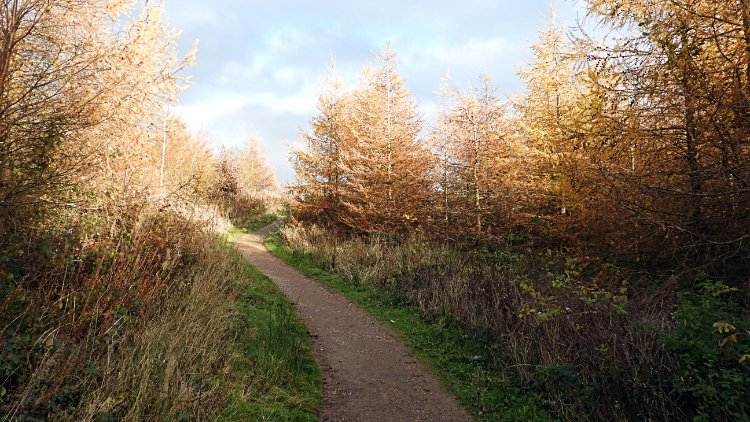 Woodland path leading back to the dam

The finale of the walk began when we turned from south bound to east bound along the north-east reservoir path. The mood changed completely on making the turn for now the sun was behind us and its low angle cast a beautiful illumination on the reservoir and the shore line. Just five minutes earlier we had been looking into subtle black and white across the water and now we had the opposite. A full colour landscape picture, What a joy this all was. A winter walk can be more revealing that one taken on the same path when full summer light flattens the view. All the contours stood out in vivid clarity. Some trees on the scrub next to the path were shredded of leaves but still full of deep red berries. Others were striving to keep hold of their light brown leaves a little while longer. After the golden browns of the small wood we walked through on leaving the reservoir edge we came to deeper greens with another area of narrow forestry and soon after we came to a gate leading us to the roadside. A short walk down the road and then a careful walk across the dam during which we enjoyed final glorious views across the reservoir... for this time, led us back to the car park. Another fantastic walk around Thruscross Reservoir was over. We were a happy couple.