Summary: This Leicestershire walk is centered on the Battle of Bosworth Field, the defining battle of the Wars of the Roses. Starting out from the quiet village of Sutton Cheney where Yorkist King Richard III took his last mass the walk continues to the battlefield on Ambion Hill before reverting to a towpath walk along the Ashby De La Zouch Canal. The walk leaves the towpath to track into Market Bosworth, a lovely place with lots of beautiful buildings. The finale is through resplendent Bosworth Park and past Spring Wood and then across and on the side of fields back to Sutton Cheney. It's a delightful walk throughout. 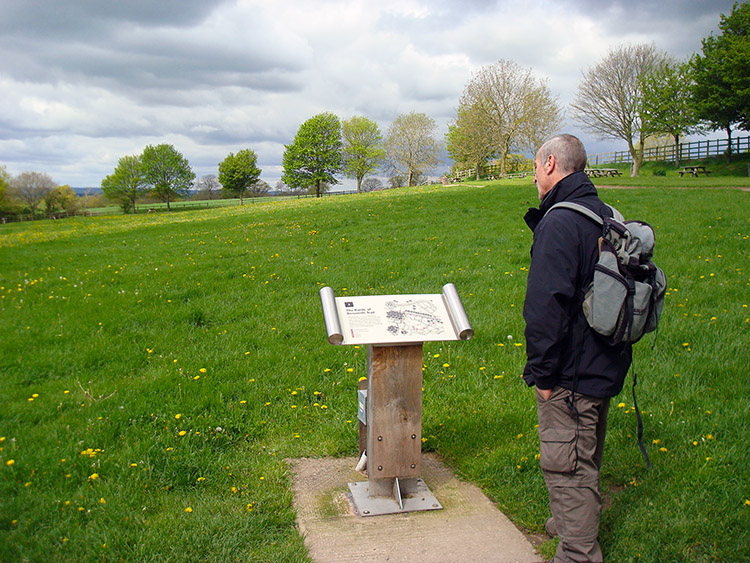 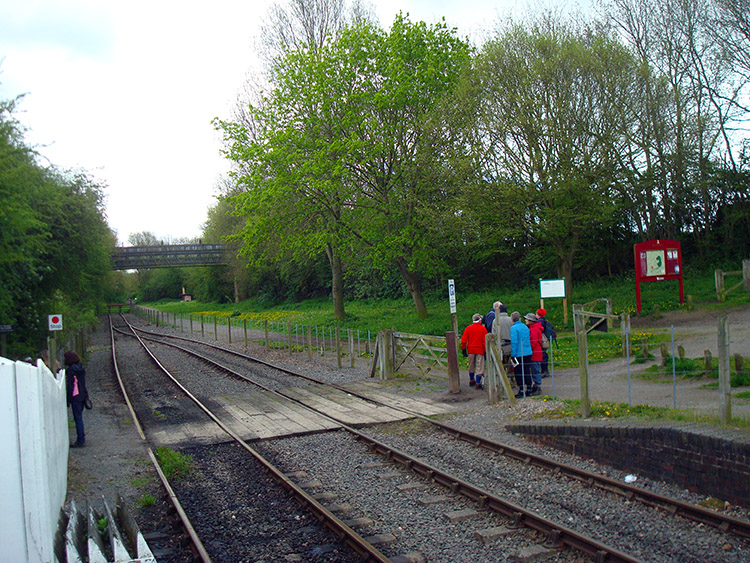 The darned Lancastrians. Being a Yorkshireman I have always lived in the fact that we were ultimately defeated in the Wars of the Roses, a fact I have often being reminded of by my Lancastrian cousins. It is heartening to know that there were few, if any, Yorkshiremen involved in the final battle of the conflict when Henry Tudor and his foreign mercenaries defeated King Richard III and his assembled army of professionals and local menfolk mainly from the east and middle shires. The Houses of York and the Houses of Lancaster were symbolic baronial titles, neither adversary knew much about the counties or the folk they conveniently represented. At the Battle of Bosworth Field the defeat of Richard III was inflicted on and around Ambion Hill, near Sutton Cheney where Richard III took his final fateful mass before riding into battle. Strolling Steve and I also set out from the quiet rural village of Sutton Cheney, marching instead of riding, and heading straight to Ambion Hill and to the battleground. The Battle of Bosworth Field was a bloody affair, our walk through the battlefield was tranquil, taken as we enjoyed looking a spring flowering trees and the first rush of Dandelions turning fields yellow. 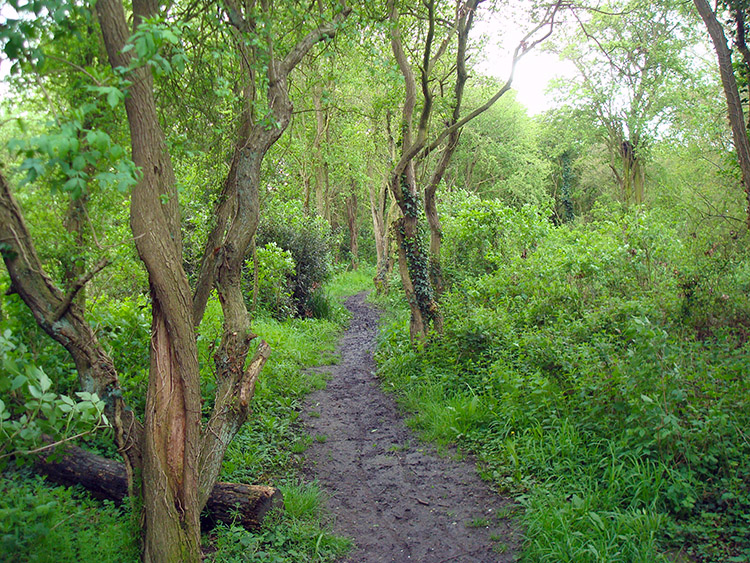 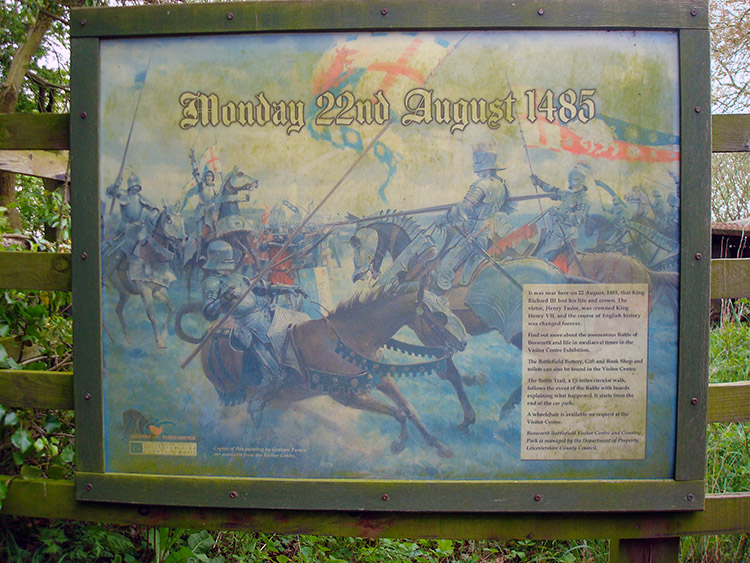 Peaceful now, not then

From the battlefield Strolling Steve and I walked to Shenton Station and across the end of the line before walking along pleasant deciduous woodland toward Ashby De La Zouch Canal. On the walk through the wood we passed flags and information boards describing the horrific battle. As we walked birds serenely chirruped in springtime bird song, a wonderful accompaniment which cheered us. Not like that fateful late summer day in 1485 when harrying marauders picked their way through the woodland flushing out defeated retreating soldiers, then it must have been terrifying. 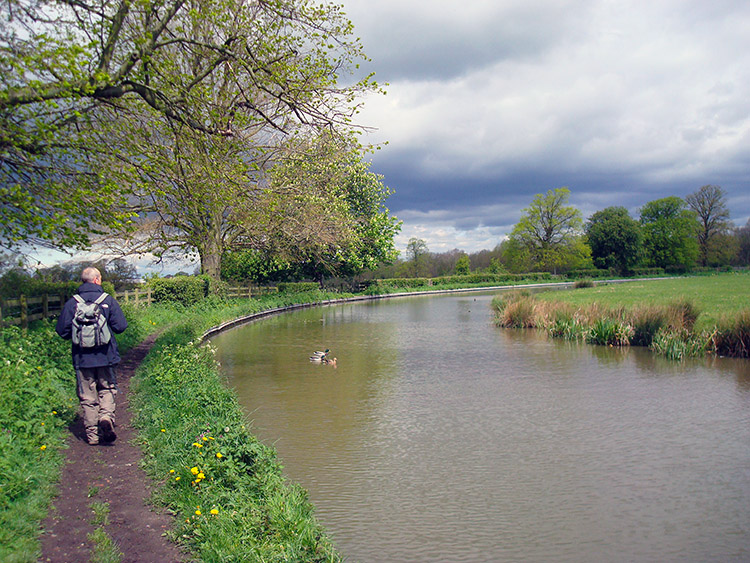 On the towpath of Ashby De La Zouch Canal 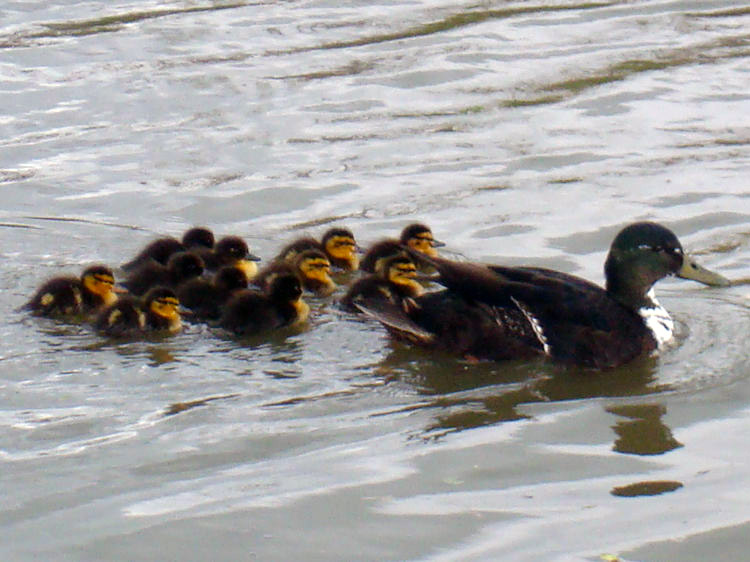 We left the battlefield well behind us as we began our walk along the canal. Just as we reached it we met another walker who described his thorough enjoyment in walking in these parts. We could not argue with his choice, we were a world away from industrious activity and close to nature. As we begun our walk on the towpath of the canal we often came across courting wildfowl and then caught a glimpse of a new spring family, ducklings keeping as close to mum as possible. 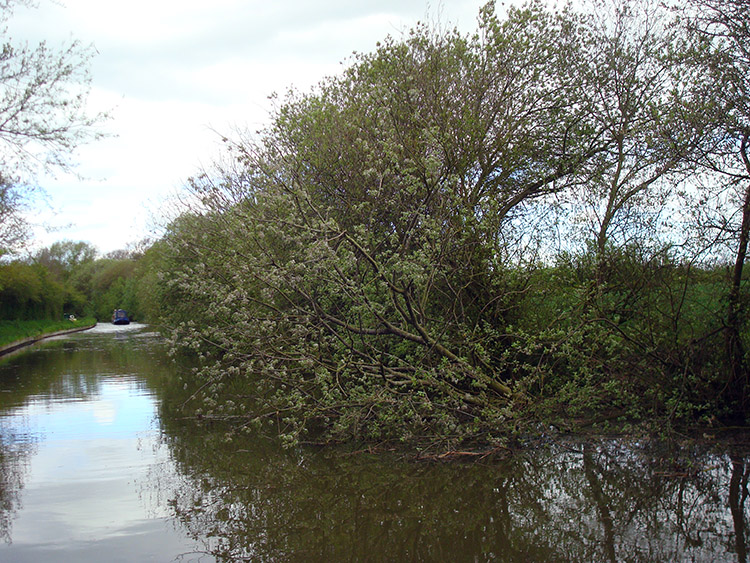 Tree fallen into the canal 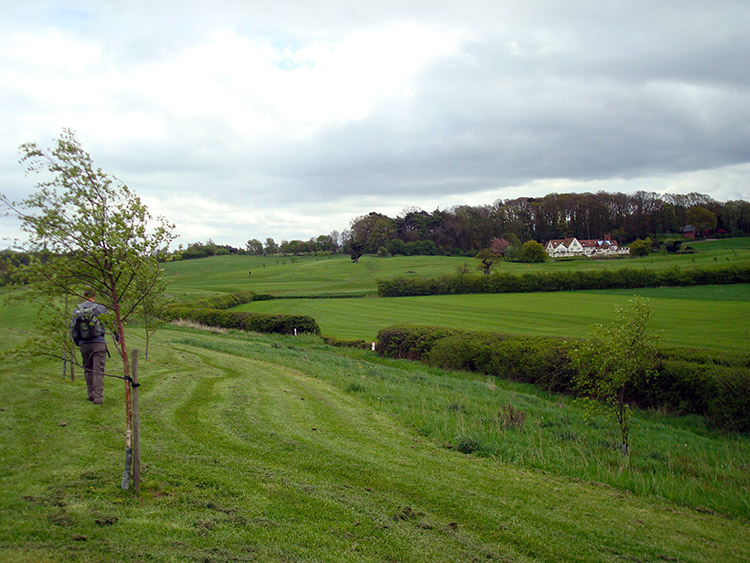 Across the golf course to Market Bosworth

The walk on the towpath of Ashby De La Zouch Canal continued to be enjoyable. By the towpath were small copses with trees sprouting green and bedecked with a Bluebell carpet. Spring thrills with new colour and new bouts of activity each day, always surprising even on overcast days such as this. We followed the canal for three of its 31 miles, also stopping to chat to a very proud man from Kent who now lived his life with his wife in their narrowboat in journeys up and down the canals of middle and southern England. He told us he had stretched the boat to its maximum which meant most of the northern canals were now not negotiable. You learn something every day. After the chat with the Kentish man Steve and I left the towpath and walked across fields and Market Bosworth Golf Course towards the town. 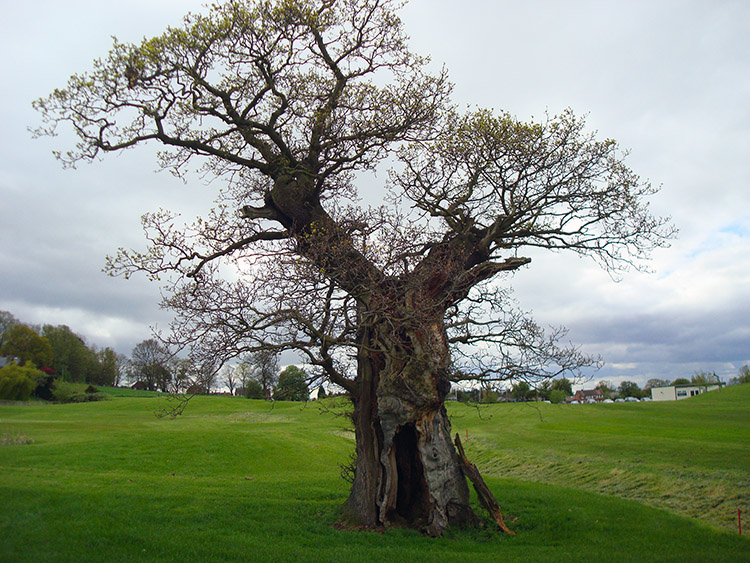 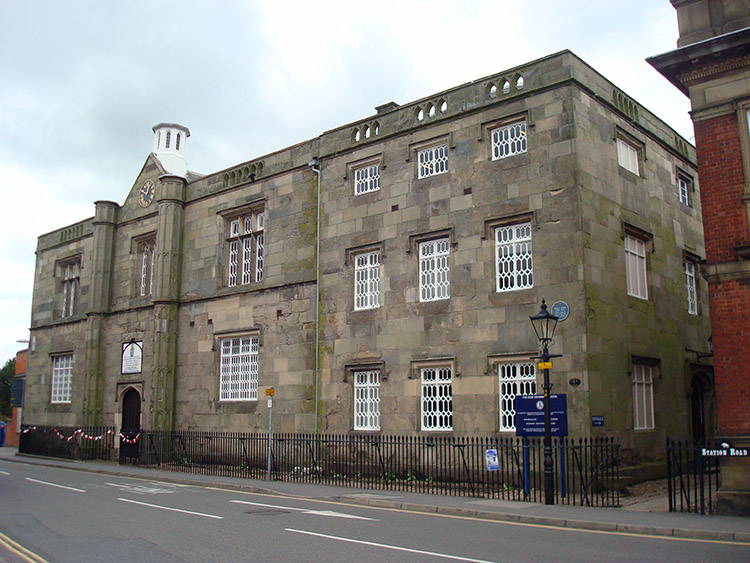 While crossing the golf course we were stopped in our tracks by the roar of two low flying tornado jets practicing their skills. It was a short thunderous interlude to the peaceful walk. From the golf course we passed a school field where youngsters were out playing in the grounds, an enthusiastic and inquisitive few waving a us as we passed by. In Market Bosworth we first passed Dixie Grammar School. A blue plaque on the school wall celebrates Thomas Hooker, the most distinguished of the School's former pupils, founder of Hartford in Connecticut and allegedly the father of American Democracy. The best known of its teachers is undoubtedly Dr Samuel Johnson, moralist, poet and author of the famous dictionary, who taught at the School in the mid-eighteenth century. We sat in the town to have lunch and watched uniformed pupils proudly walking about their business and why not, they are fortunate to be educated in such wonderful surroundings. 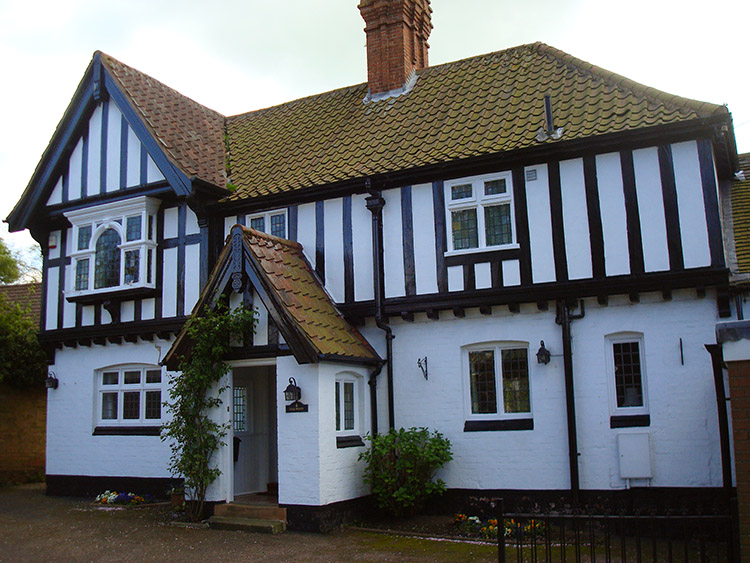 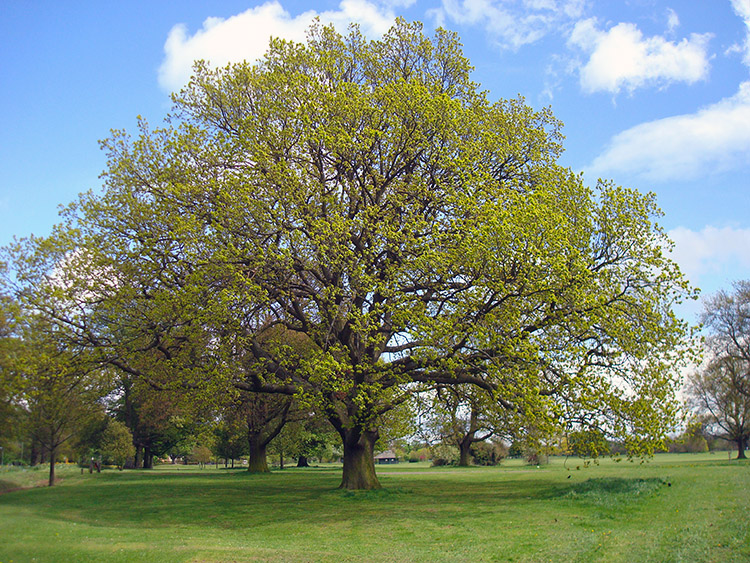 Market Bosworth was a turning point in our walk, preceding it had been a lovely walk albeit dampened by persistent cloud and early morning drizzle. After Market Bosworth the cloud parted somewhat and provided tantalising glimpses of sunshine. With fortune the sunniest part of the day was spend walking through Bosworth Park, a landscaped 35-hectare park which was formerly part of Bosworth Hall deer parkland. There are fine, mature trees, a lake, a planted arboretum with exotic species, a wildflower meadow and a community woodland. In the woodland we spotted lots of bird boxes and at the lake there were lots of friendly wildfowl. The park was simply lovely to walk through. 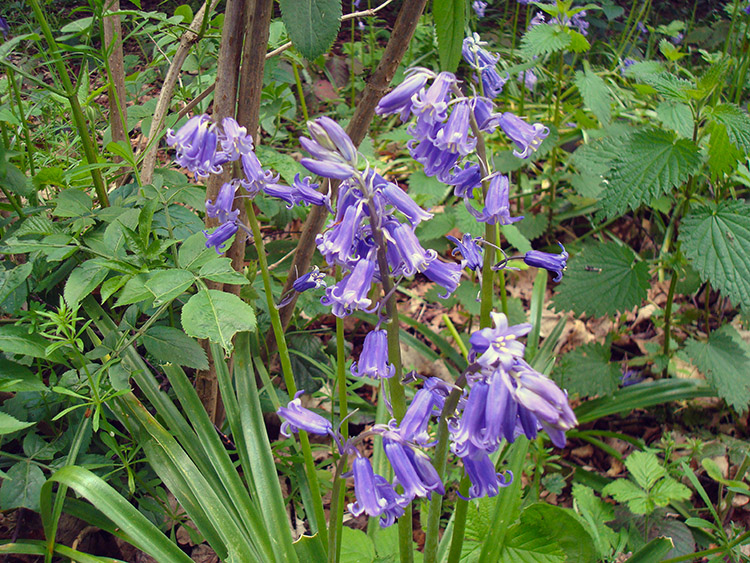 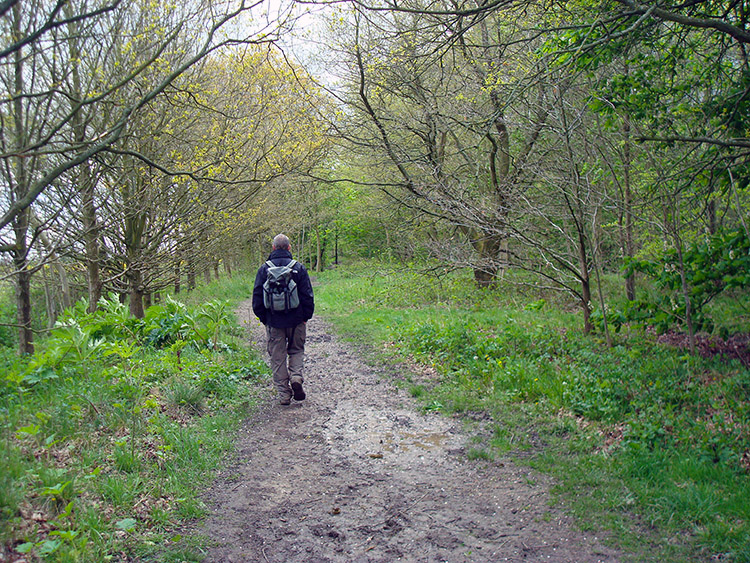 On the way back

From Bosworth Park Steve and I walked south past interestingly named features like Bow Pool Covert, Oak Ring and Looking Glass Pond before reaching the edge of Spring Wood where we found a camouflaged ladder reaching up to the tree canopy. Probably a spot for bird watching, but a precarious one, there was no hide at the top of the ladder. From Spring Wood we crossed fields and walked on field sides back to Sutton Cheney. On the penultimate field side walk we came across broken small blue eggs, probably a Blackbirds. An opportunist had found the nest before young could be reared, the prospective parents would have to find another home and start again. Disappointed for the birds we finished our walk, lost life is a natural course of events in nature. Sadly the losses on Bosworth Field were much more tragic, caused by man's arrogance. Sadder still, we have not yet learned the futility. Forget that, I am going for a walk.