Church Stretton and the Long Mynd

Summary: As we were staying in the Long Mynd Hotel above Church Stretton this walks starts at the hotel though a good alternative starting point is near the National Trust site in Carding Mill Valley. Immediately after passing the National Trust buildings the walk climbs to the Long Mynd ridge by following Mott's Road and the Jack Mytton Way to meet the Shropshire Way which is then followed south west to Pole Bank. By walking a little further to Pole Cottage the walk then turns on a south east course across Round Hill and then on a good path which bisects the round hills of Grindle and Callow before leaving the uplands and descending to the outskirts of Little Stretton. The walk then follows lanes and then crosses fields at the Owlet before continuing through woodland back to Church Stretton. The walk is a delight throughout.

The Walk: It was a beautiful morning, all sunny and very warm for the second day of September 2014. I could not believe my luck as the last few weeks, in fact practically all of August had been miserable with little sun and chilling winds. With the weather welcoming us out to play Dave, Jez, Steve and I set off from our self catering bungalow at the Long Mynd Hotel to find the path onto the Long Mynd. I was eager to get going, friends who had been here before had told me this was one of the best walks in Shropshire. Let us see if the hype was correct shall we. 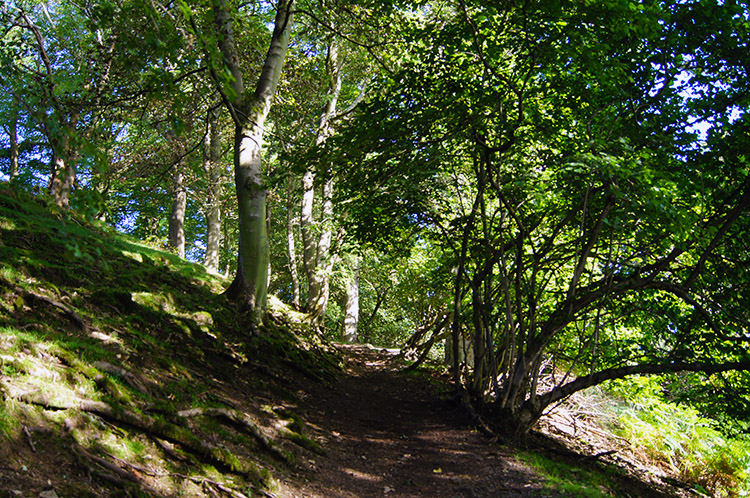 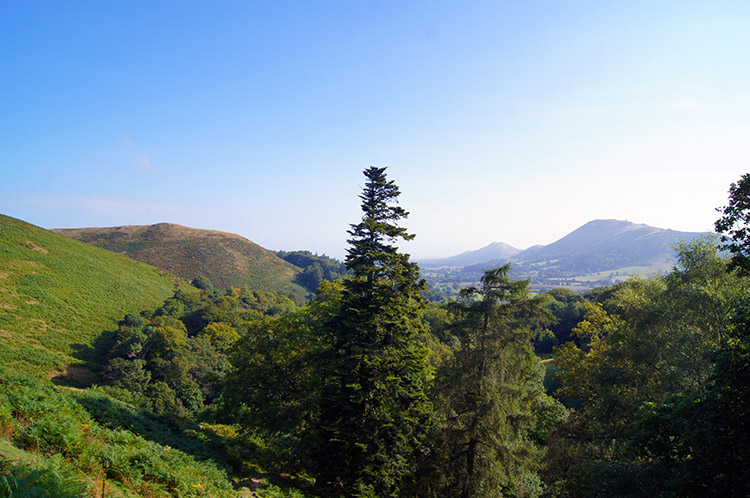 After a little searching for the right path I chose one at the very end of the road from Church Stretton to the Long Mynd Hotel and beyond, a track leading up past the last pair of Bungalows. The initial climb was quite steep first on unmade path and then on a series of steps, about 75 in all. It was enough to get our lungs going. The steps led us up on to a small woodland track which led north towards Townbrook Valley. After the steep ascent we made a short sharp descent to the head of the valley which caused the lads to despair. "We could have taken that other path across the field and being here without the effort" Dave asserted. Jez agreed with him and I could not argue but it was not marked and we did not know beforehand. Blooming heck. At least the unnecessary up and down had warmed us up into walking form though and after passing Townbrook Valley we climbed a little more to capture views across the top of Church Stretton to Caer Caradoc Lovely views they were too. 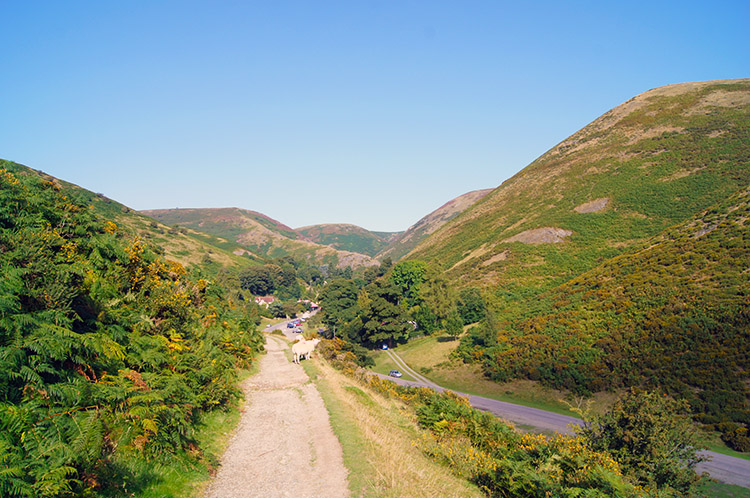 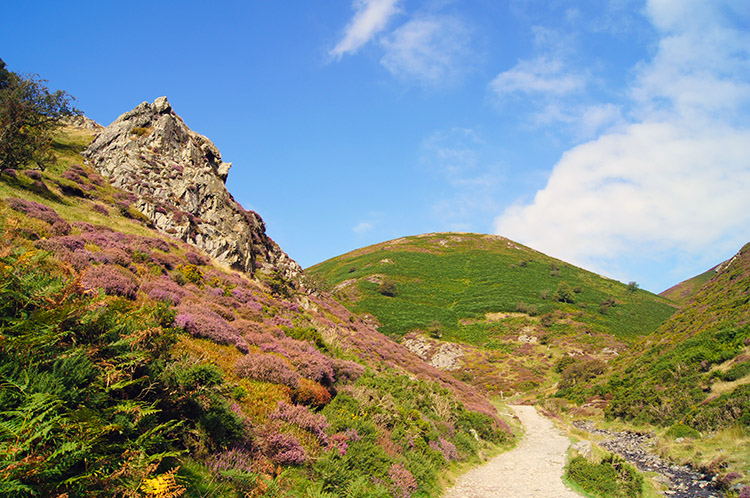 Soon after rounding Burway Hill which had proved our first clear views we crossed a road to follow the track past a few houses which led us directly towards Carding Mill Valley. Below the path to our right I could see a few people ambling, some with dogs. Cars were parked nearby, they were not walking far, just enough for a little exercise. Looking straight up Carding Mill Valley was magic, a series of small hills on either side of the valley making the way to go very obvious. Before the hills we had to pass some buildings, home of the National Trust site in Carding Mill Valley. As we walked by the cafe staff were preparing for a busy day. After the cafe plaques on some buildings explained their former industrial use as Carding Mills were places for making quality fibres and yarns. Church Stretton, neighbouring towns/ villages and East Wales were fine purveyors of such fabrics before the industry collapsed. Another example of our industrial heritage to which we should be so proud. And as industrial evolution had led to their redundancy we left the mills in their present silence and climbed up the valley. 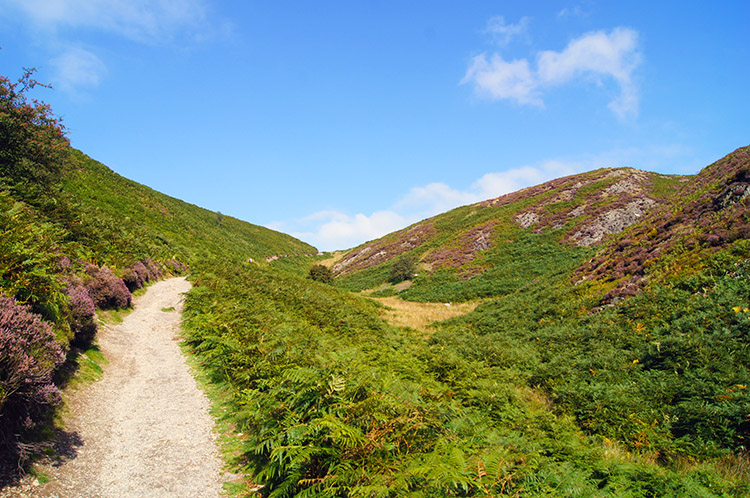 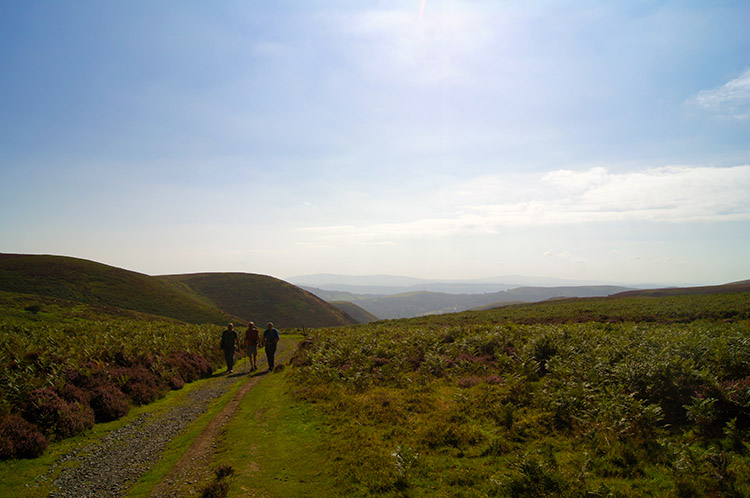 Looking back from Calf Ridge

With the sun shining brightly we continued to walk up to the sky. How could we not do so, the beautiful blue sky was alluring and the path along Mott's Road and Jack Mytton Way was never too steep to abate our steady ascent to the Long Mynd. Incidentally, half way up the valley there is the choice of bearing left along Long Spout Hollow to a waterfall. I had chosen to stay on the right hand path, missing the waterfall but had I chosen the route to the waterfall which would have shortened the walk by a half mile we would have missed the white horses. 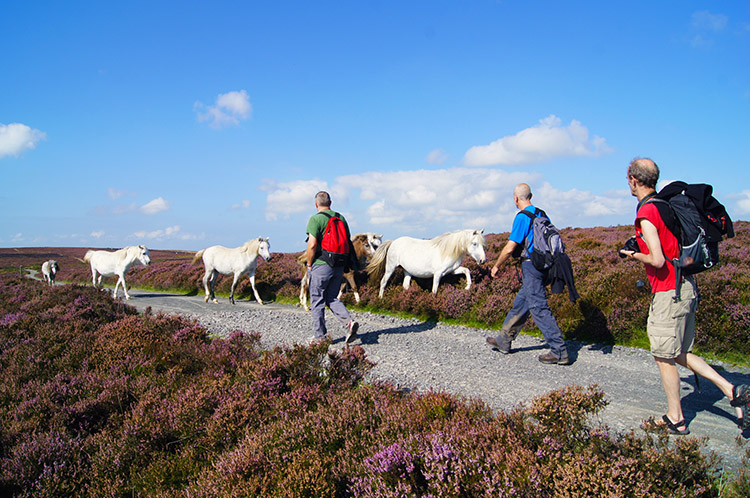 A meeting on the Long Mynd 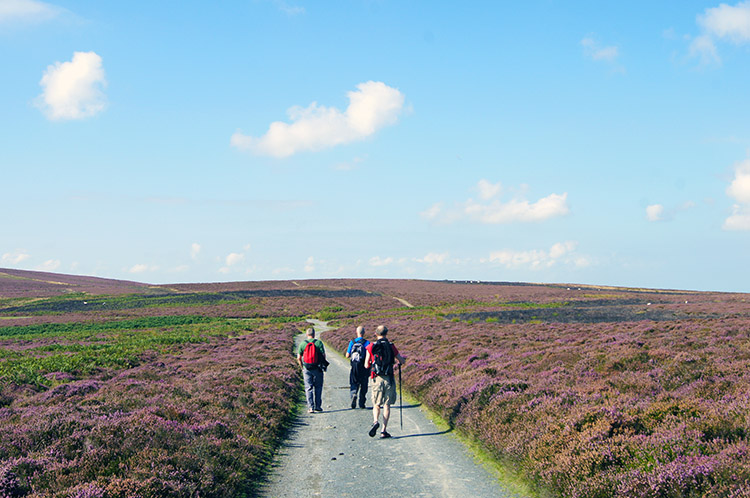 Chance meetings with walking groups often end in a conversation. They are usually brief with the hello, good day, nice weather phrases being standard responses to questions. Sometimes the conversation can be more detailed with a discussion on the respective routes being taken or what to look out for being imparted between the groups. However the chance meeting with the first group of walkers we met on the long Mynd went by without conversation. Indeed it would have been difficult to make conversation because the walking group was a family of attractive white horses. There were about a half dozen adults and a couple of foals. The horses, like we, never broke their step but they did pay us the compliment of stepping off the path at the point of meeting. After they had passed us they returned to the path. It was a lovely encounter. 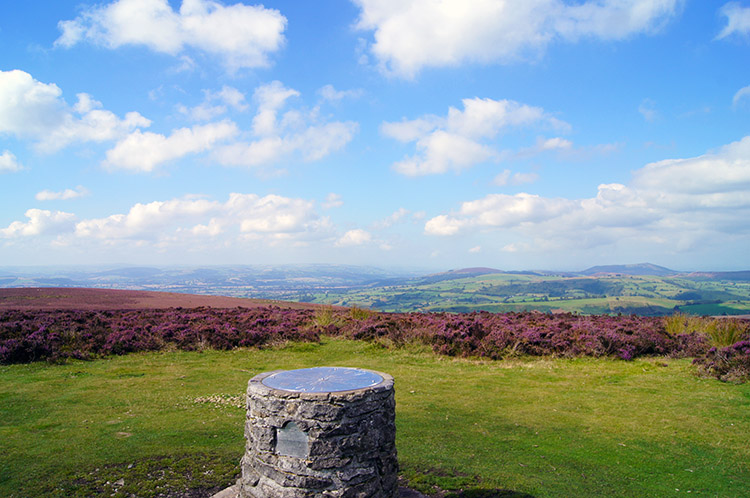 View to the west from Pole Bank 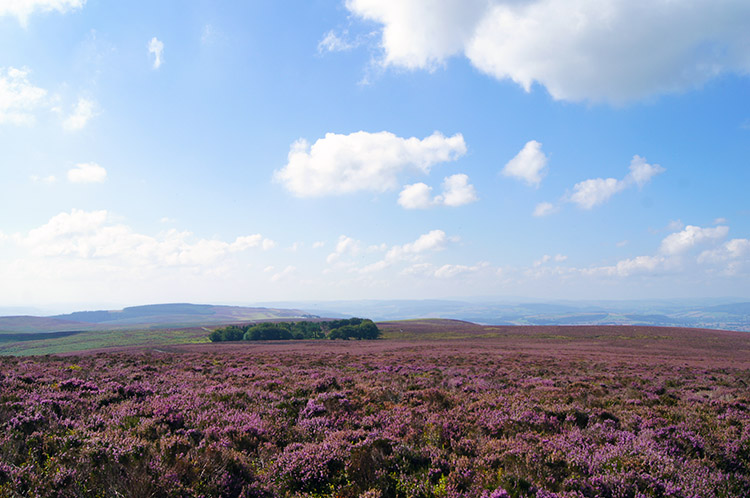 We continued walking on the very good path along the Shropshire Way and the Long Mynd to the highest point at Pole Bank. Here was a good spot to take a short break as the views were absorbing. We were blessed with excellent visibility which provided sweeping panoramic views to the west and the rolling hills of the Welsh Borders. While sitting around the viewpoint post at Pole Bank we met a second group of walkers enjoying their day on the Long Mynd. These we could talk to and yes, the hello, good day, nice weather phrases were all called upon. After our brief and courteous conversation we left the other group at Pole Bank to further enjoy the views while we continued on the Shropshire Way towards Pole Cottage which is in fact a tree circled square clearing with a old rusting corrugated hut in the centre. Amidst all though the dominating draw to the senses was the carpet of purple heather. It seemed to be everywhere over this part of the world. Absolutely glorious. 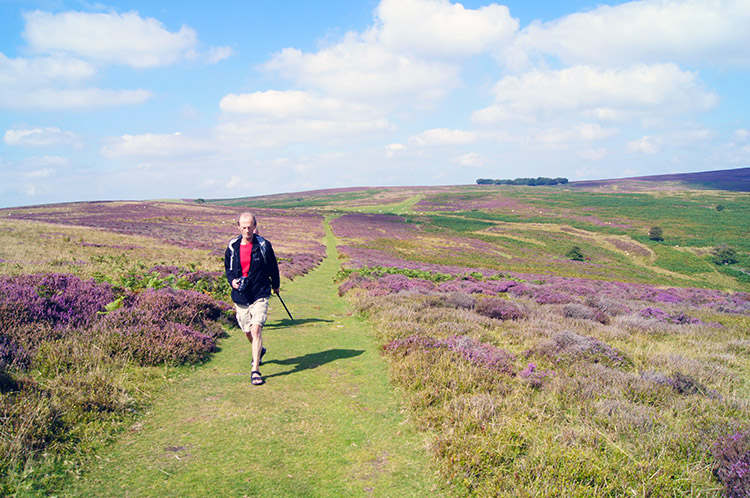 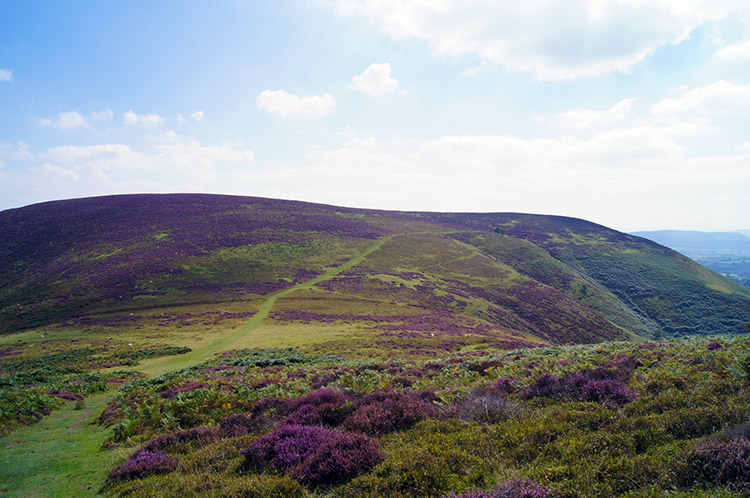 The boys were really enjoying themselves on the Long Mynd. Conversation flowed and spirits were high. The Shropshire Hills had presented themselves as very attractive from the first time we cast eyes on them when arriving for our short walking break and the initial attraction had been enhanced with this walk. Everything around us was a pleasure to the eye, the heather, the drumlin hills, the rolling sweeps of land with climbs and descents never too tasking. We continued on glorying in the walk as we left the Long Mynd at Pole Cottage and headed south east across Round Hill and down to Barrister's Plain. There we spotted a few trees beside the path on the upper slopes of Grindle with a beguiling view into Callow Hollow. We all agreed it was the perfect spot for lunch and with the decision made we headed towards the trees. 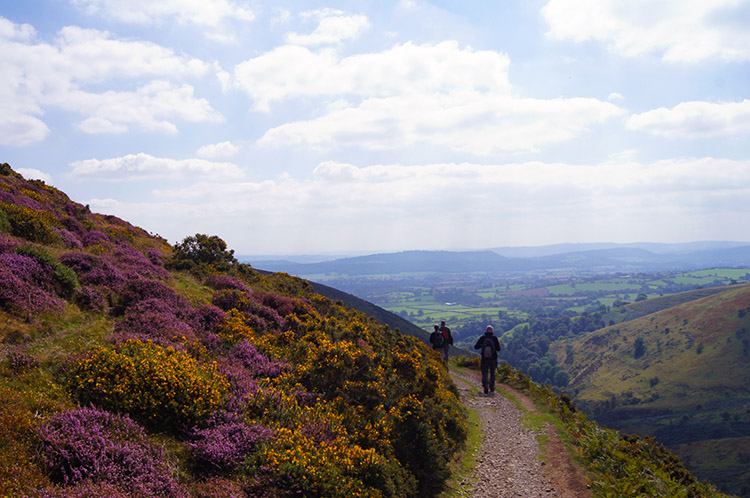 On the path skirting around Grindle 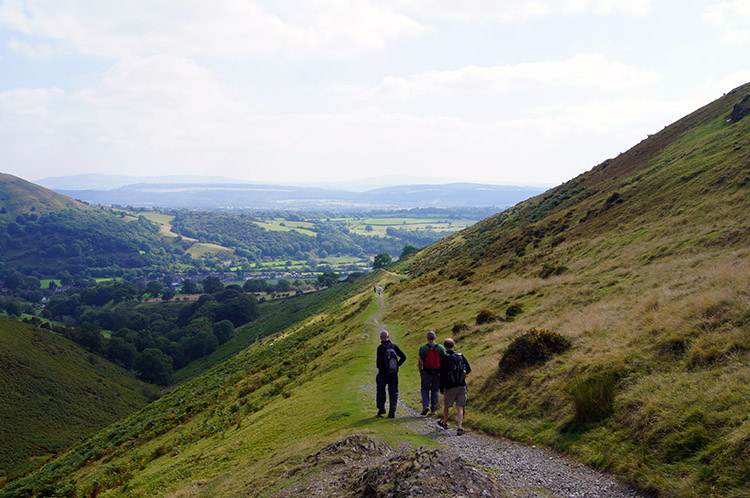 We had made a good choice, it was a great place to enjoy lunch, though as is often the case I received the attention of the only fly in the neighbourhood. Throwing my spare sweatshirt over my head confused the gnat. After our leisurely lunch we resumed the walk by continuing on the path skirting around Grindle which led us to Grindle Hollow from where we walked around the mid slopes of Callow. I challenge anyone not to be entranced by this section of walking, the views change constantly as the hills are rounded and new distance views emerge. And with the views down into the neat picturesque valleys below us the scene was really sublime. Shropshire was beguiling us. 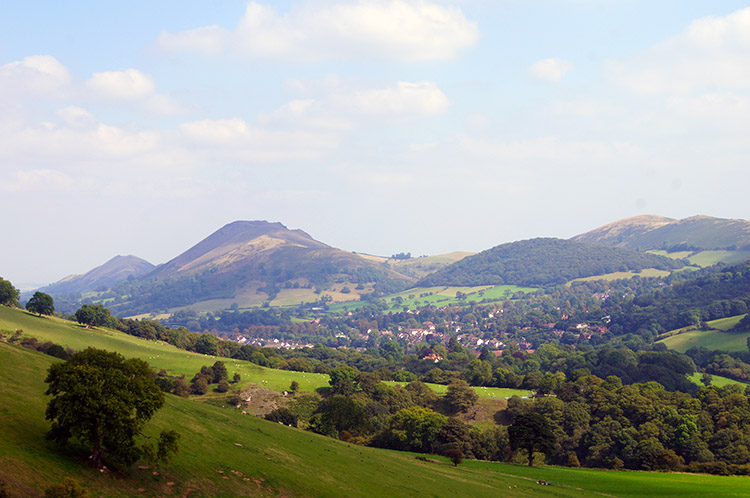 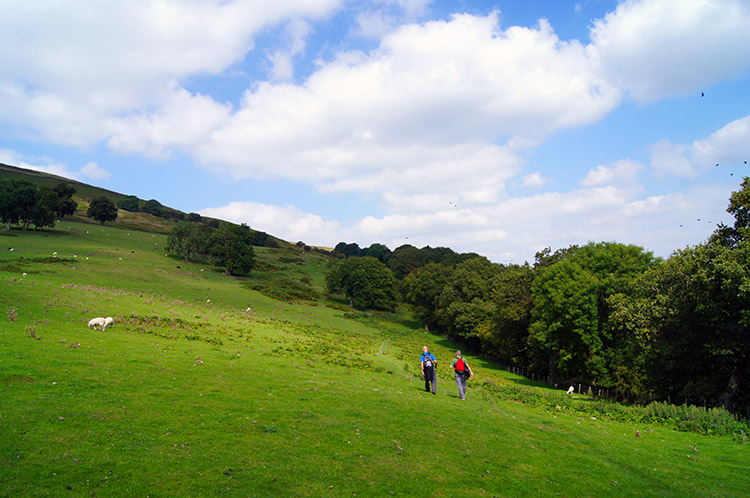 It was a shame to leave the uplands with the heather blanket and the Long Mynd Ridge behind, such was its beauty but we had a walk to complete. After rounding Callow we completed the descent by following a path above Small Batch towards Little Stretton. While we had height the view of Caer Caradoc and The Lawley hills was perfectly framed. "Must climb them" I thought as I looked over to their attractive shapes. By the time we were down in the outskirts of Little Stretton those views were just imaginations, fixed in the mind. From beside a small campers field we crossed the beck of Ashes Hollow and climbed a short distance up to some fields at The Owlet. We headed over the open fields towards woods. 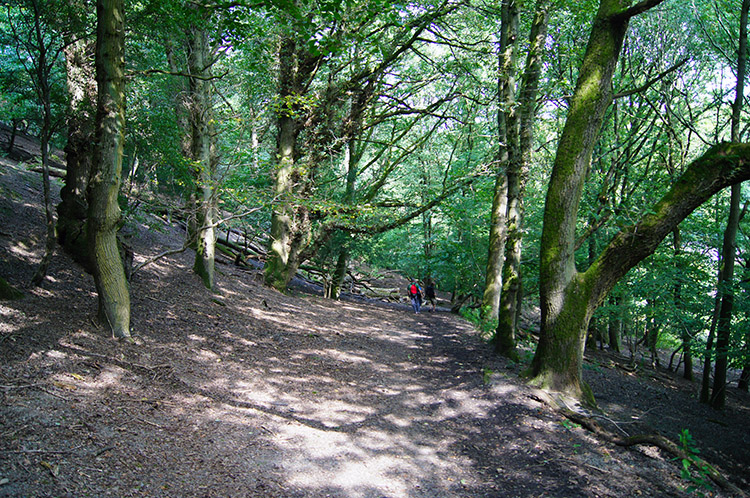 Woodland above and parallel to Ludlow Road 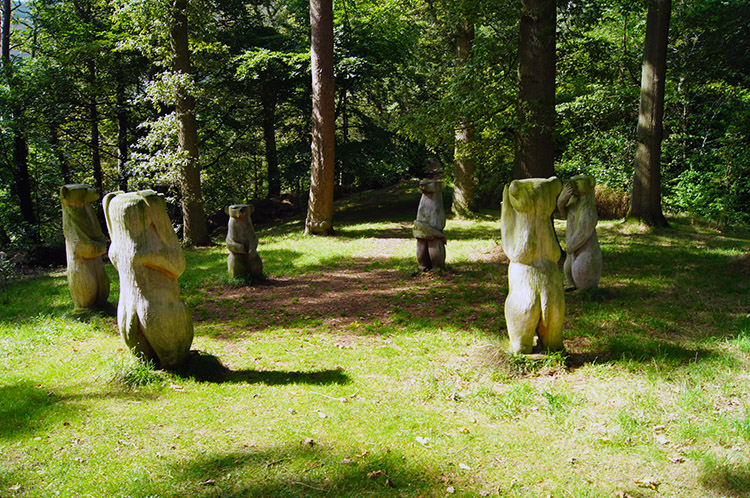 Once in the woodland which led us on a parallel line to Ludlow Road back towards Church Stretton I spotted a rope hanging from a tree with a tyre fixed to it. Yes, of course I had a go; it looked strong enough to bear my weight and indeed it did. What fun I had. After playtime we carried on walking through the wood which took us out and down to Ludlow Road before another track led us straight back onto a bridleway track though more woodland and back to the Long Mynd Hotel. Our walk was completed by walking through the grounds of the hotel directly back to our bungalow. We met a circle of bears on the way.